Hands-On With The REC RNR “Roads Not Required” Beach Runner

Have you always yearned for the legendary indestructible Land Rover? Now you can have one. Well, at least a tiny bit of it. The dial of today’s REC release, the RNR Beach Runner is handcrafted from the roof of a 1981 Land Rover Series III. Let’s look at it.

Roads Not Required. That’s what RNR stands for. It’s what Land Rover earned its unbeatable charm for. It’s tall, it’s shaggy. It doesn’t have much muscle and it definitely doesn‘t look like a car that would take you everywhere. Or like a car that would survive you. Oh, and the lamps, the grille, and the light green color… I always wanted one. As you can probably tell, I still do. 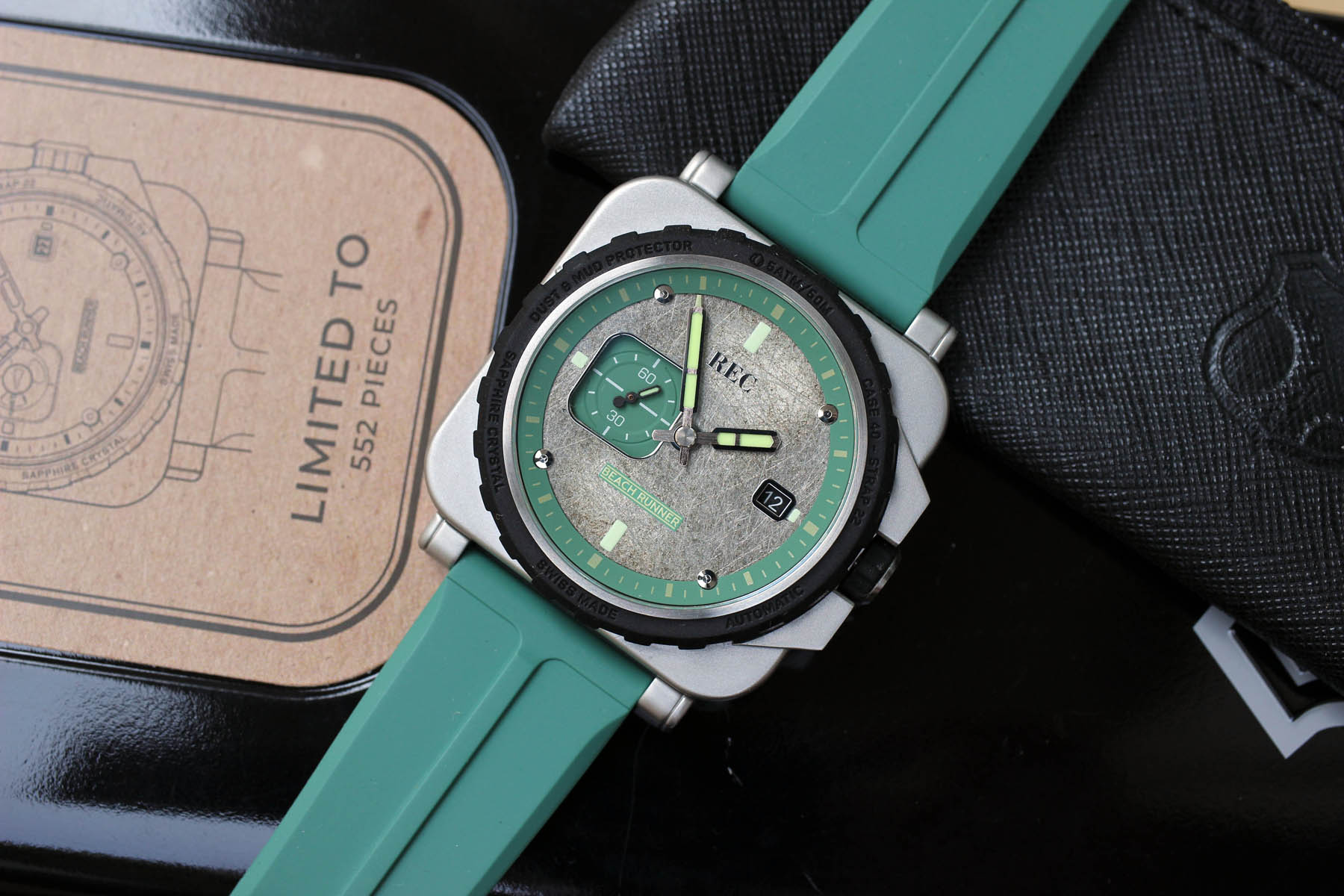 The Series III is the most common series Land Rover with 440,000 model pieces built from 1971 to 1985. There was either a 2-door off-road/pickup or a 4-door off-road model available. Adventurer and watch editor Jason Heaton, picked up a 2-door ’76 Series III a few years back. It’s called Giles The Rover and has its own Instagram. The dial of the Beach Runner you are looking at is handcrafted from the roof of a 1981 Land Rover Series III owned by Portuguese photographer and filmmaker, Daniel Espirito Santo. 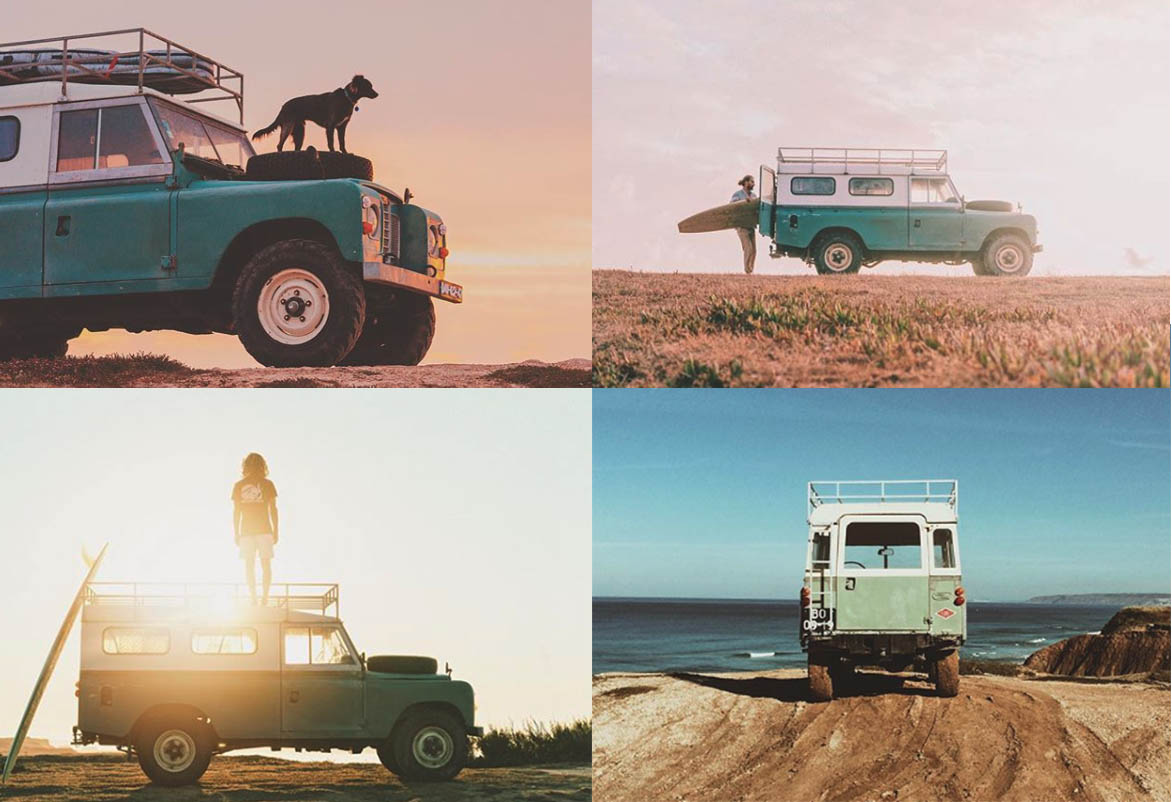 If you have never heard of REC before, this is what the brand does: the team sources a wreck of some more or less legendary aviation or racing machine and then turns a piece of it into a watch. A simple but strong concept with a lot of stories to tell. The founders Jonathan and Christian have already immortalized a Mini Cooper, a Ford Mustang, a 911, and an original RWB Porsche in this fashion.

The watches always come in pretty limited editions, with quirky runs of 493 or 535 unique pieces. “We produce as many watches as possible from the material we acquire. This solely determines the number of watches we are able to produce. It‘s the gift and the curse of our concept,“ says the founder Christian Mygh.

REC designs are pretty wild. They also differ from model to model. As a huge fan of WW2 stories, I could not pass on the recent RJM Bluebird. It was made from parts salvaged from a Spitfire Mark IX aircraft that crashed in the Russian Tundra. In my opinion, it is the most elegant of the brand’s collection. If you compare the Bluebird and Beach Runner, they are a long way apart. The designs are not about the brand. Rather, they reflect the designs of their donors. The Bluebird has a crown guard styled as Spitfire wings. The same element on the Beach Runner looks like a Land Rover’s front grill. 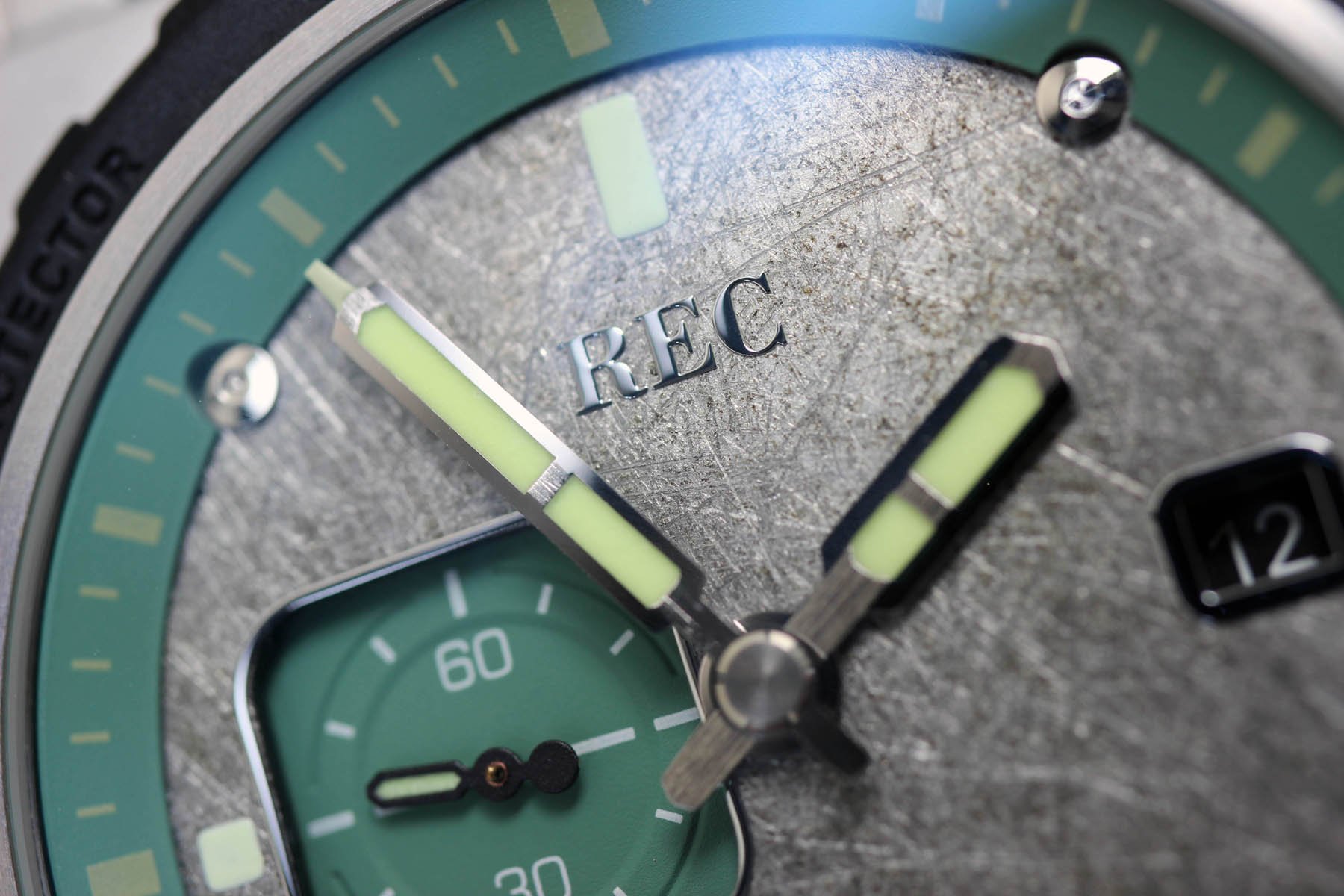 I didn’t see a single shot or mock-up before I unboxed it. And it came as a shock! It doesn’t look like only the dial is made from the car. It looks like the guys took giant scissors and cut the whole watch from the front grille that runs into the front fender. Well, some of you might see a bit of Bell & Ross in it, but I assure you that besides the square case and round dial its a completely different watch. The rounded corners of the square case seem to copy the headlights and fender curves. Meanwhile, the rubber bezel looks like a spare tire resting on the bonnet.

To me, watches often feel smaller in hand than the diameter suggests on paper. Here I feel the opposite. The REC Beach Runner is “only“ 40mm, but looks to have 2mm or 3mm more in mass. When I say it wears bigger, I don’t mean that in a negative way. The cutely shaped lugs are short and have a thin shallow notch that makes them look like they are assembled from two pieces of metal. The bottom half of the case seems to be vertically brushed and polished. The top view has decent sandblasted finishing. 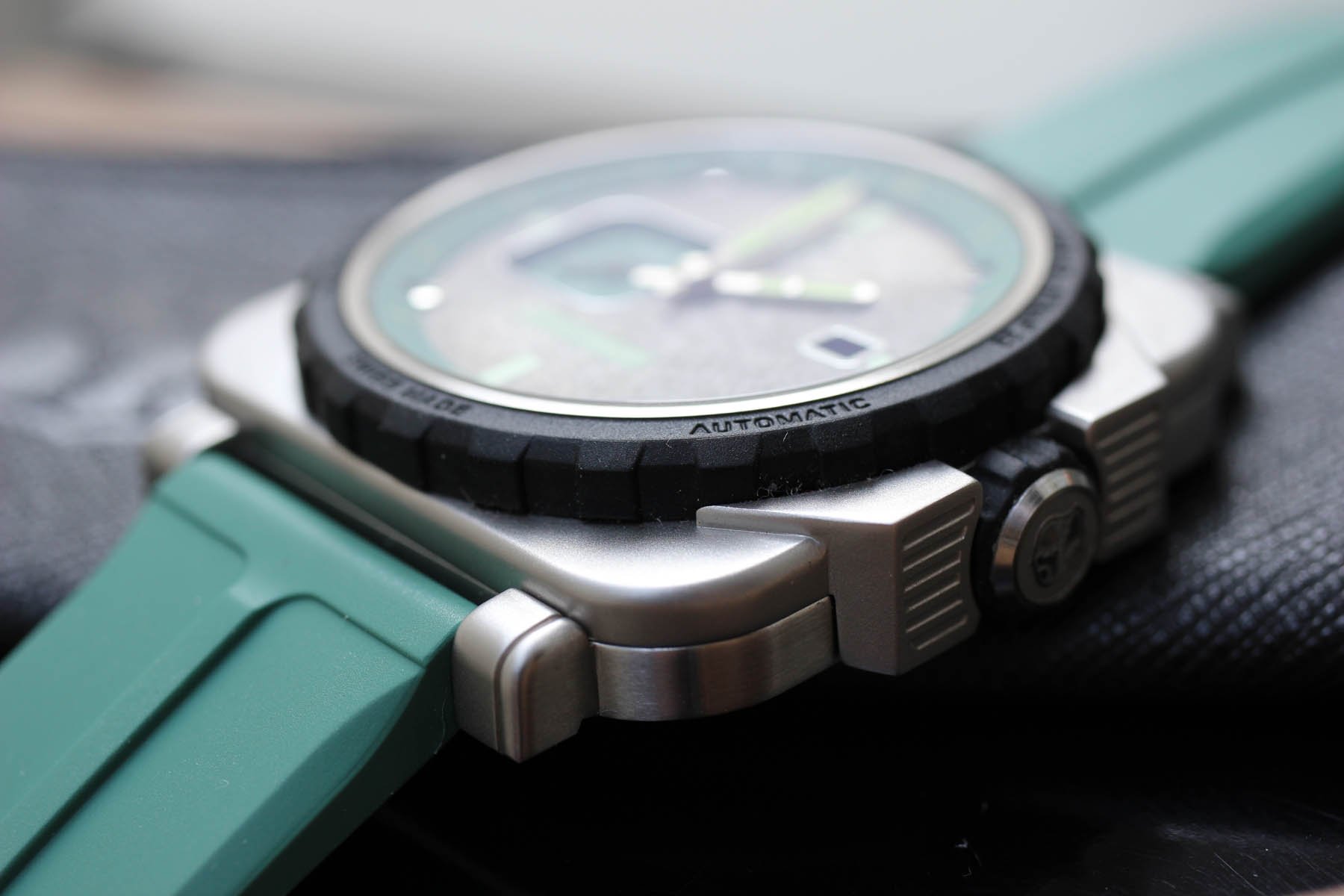 I don’t speak about straps in every review. Sometimes I don‘t mention them at all, as it’s an interchangeable element. But this Flourcarbon Viton rubber strap is divine and is amazingly comfortable. Rubber straps coming in that size and style are often stiffer. This is not even like soft leather; it feels like velvet. It’s soft, super elastic, but easy to slide under the free loop. I need to send the watch back, but perhaps I will “forget“ to pack the strap. Christian decided to throw-in this rather fetching light green option along with the standard black strap. Sorry guys, I initially planned to shoot both straps, but it’s not happening. The light green is a killer choice.

Stepping up the game

“We have been using Miyota for approximately five years. While we have never had any issues with the 9-series, we decided early last year to shift focus and initiate new products that were purely Swiss-made,“ explains Christian. The result of this thinking? A Swiss-made product — finally. I was also curious about where the other components are manufactured. “Without revealing too much, I can say that our vendors are both in the north and south of Switzerland.“ Employing a pretty standard Sellita SW200-1 caliber means REC goes from being one of the most expensive Miyota-powered brands to an accessibly priced Swiss-made marque. What else can you buy for €1,500? 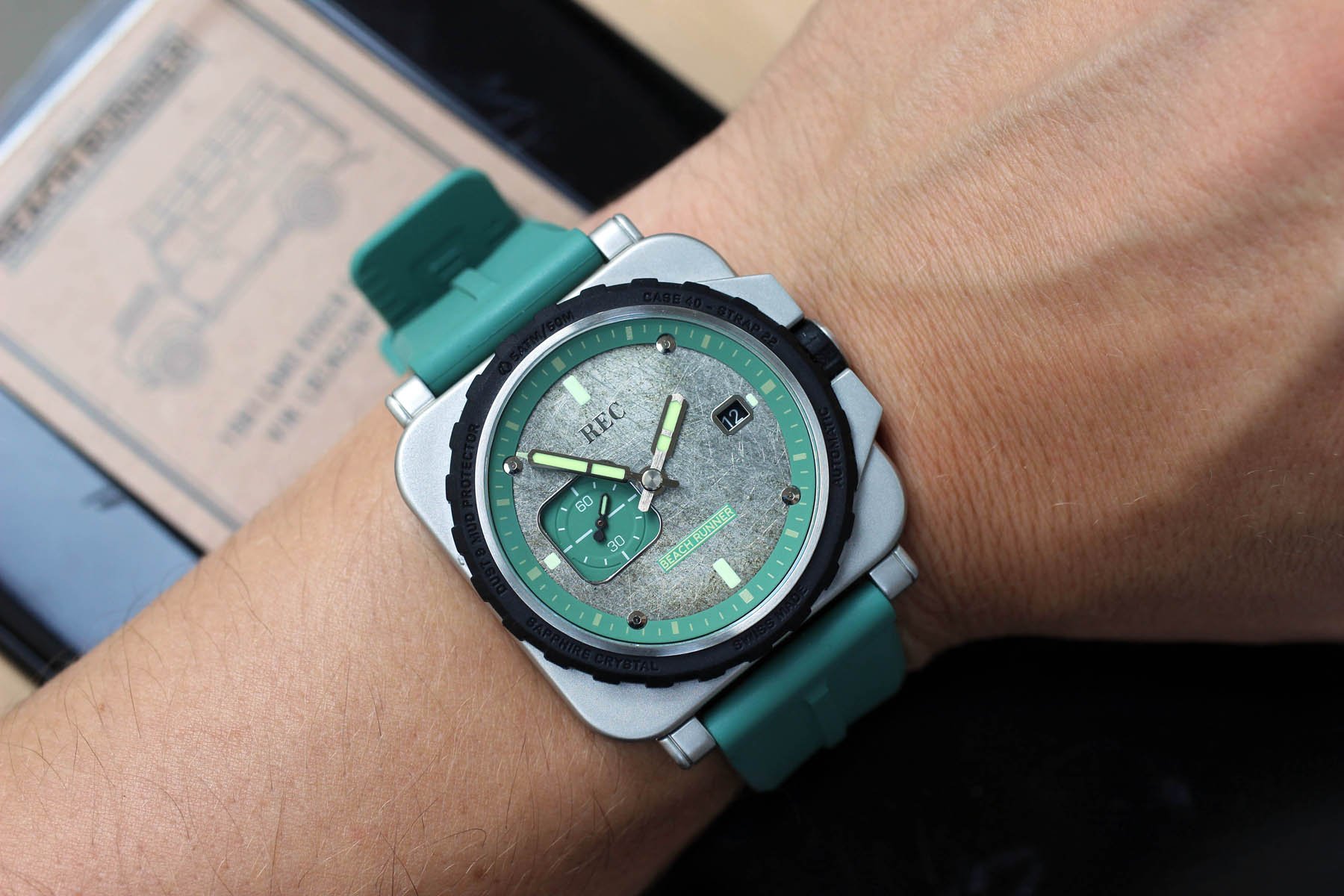 The tire-like bezel is an eye-catcher. You don‘t need to drink a few glasses of wine to hear it whispering, “Grab me!“. Despite the fact that there is no standard bezel marking and the bezel seems to be static, you can‘t stop your fingers from playing around with it. I couldn’t at least. I would have loved it if it were able to rotate — that would be awesome. As compensation, we get an unusual tread pattern around the edge. I wouldn’t have expected the case diameter or strap width to be stamped on the wall of the “tire”, but here we are. If a watch can surprise you, it’s a bonus. The “dust and mud protector” inscription is my favorite.

The detail of the rubber ring repeats on the crown as well. It is really nice for winding, but a bit irritating when pulling out. If the REC Beach Runner becomes your only watch, it will be no issue (should you wear it every day). The top glass sapphire amplifies the flat design and the core design story. A handcrafted piece of metal from the roof of the 1981 Land Rover Series III became the dial. If you ever turned a bit of rust into a shiny piece of metal using sandpaper, I bet you will study the depth, length, and curvature of the millions of scars on its surface. This is the kind of moment you want the sapphire to evaporate so you can feel the structure of the cold metal with your fingertips.

The depth rate shows 5 ATM — 50 meters. But there should be another depth rate stating how deep the sub-seconds and date disc are. After a week on the wrist, it was the shiny square framing with rounded edges and the seconds hand that got the most attention. Does the seconds hand look black? It is, indeed! I like it as much as the central flat top disc on the minute hand that hides the central pinion. 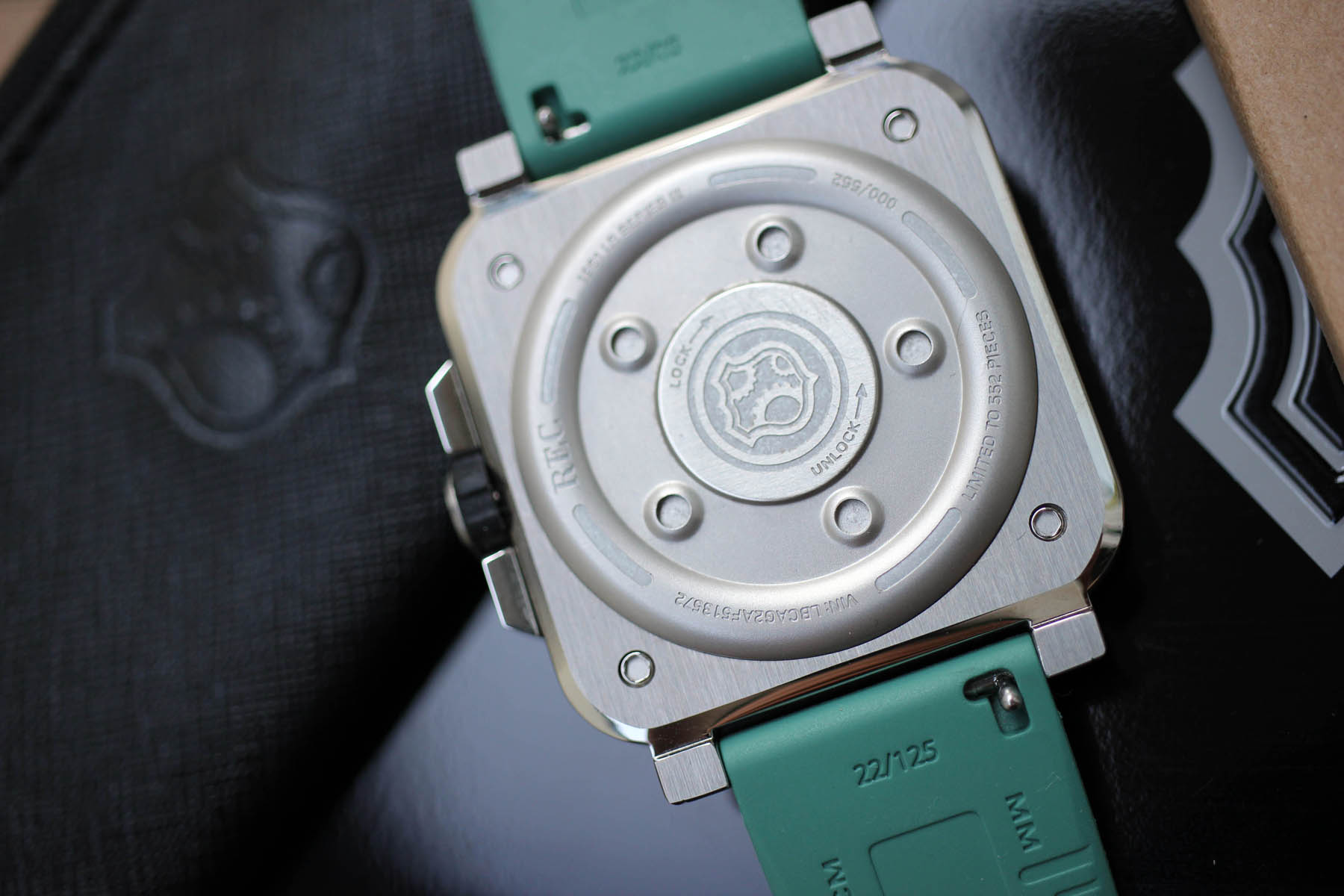 The background of the minute track mimics the original car color. I’m just guessing, but I assume it was not easy to achieve an identical color tone on the rubber strap and the inner bezel ring. You can clearly see that the bezel ring doesn’t touch the dial. It’s a tiny but important detail giving the metal plate space to breathe. Mind the four rivets holding the dial and how they’re integrated into the bezel.

If I owned one of the original Land Rover Series III cars, I would be on a pre-order list for this REC watch no matter the design. I don’t know the work of the Portuguese photographer that owns the donor car, but the Land Rover aura is strong enough for me to listen to the movement ticking. I guess the extravagant design needs a man (or woman) of exquisite taste. But if the watch strikes a chord with you, you can get a quality Swiss-made watch with attention to detail for fair money.