Why did it take so long for a useful scale to make it into a contemporary chronograph?
Daan de Groot
comments 19
Share

Judging by the multitude of pictures featuring a watch and some “casually strewn” coffee beans, there must be a lot of coffee lovers within the watch community. Well, if you’re one of them, then Singer Reimagined has just the watch for you! The new Flytrack Barista comes with a coffee timer on the dial, allowing you to produce the perfect cup of coffee with your fancy stainless steel espresso machine. All you coffee lovers, gather around. Let’s take a good look at the Singer Reimagined Flytrack Barista!

Almost two years ago now, Singer introduced its Flytrack collection. It consisted of three watches that featured a simplified design and movement. Well, simplified in comparison to their very impressive bigger brother, the Track1 Chronograph, that is. The Flytrack watches are certainly still not simple pieces of equipment, they just don’t record the minutes and hours on the chronograph. But they do feature a 60-second flyback chronograph hand, which also serves as the running seconds. And now Singer has found the perfect application for that bright orange chrono hand — a coffee timer!

The three original versions of the Singer Flytrack all featured a different scale on the dial. All three of the classic chronograph scales made an appearance — the tachymeter (for speed), the pulsometer (for a pulse), and the telemeter (for distance). They all came with the characteristic Singer hour disc surrounding the dial, but it was blank except for a colored triangle to indicate the hour. All three watches came in a Grade 5 titanium version of the brand’s signature cushion case. When you take a quick glance at the new Flytrack Barista, you might think it’s more or less the same watch. But there are actually quite a few differences.

When you first pick up the watch, you immediately notice is its added weight. That’s because the Flytrack Barista comes in a 44mm circularly brushed stainless steel cushion case. Another difference to the original Flytracks is that the designers added numerals to the signature hour disc. That means you’ll have to read the hours via Singer’s unique orange needle at the very bottom of the dial. Just like the Pulsometer version, the Barista features a rose gold minute track, but this time, it features numerals in five-minute increments. And now we finally get to the star of the show — the first-ever coffee timer on a mechanical chronograph! 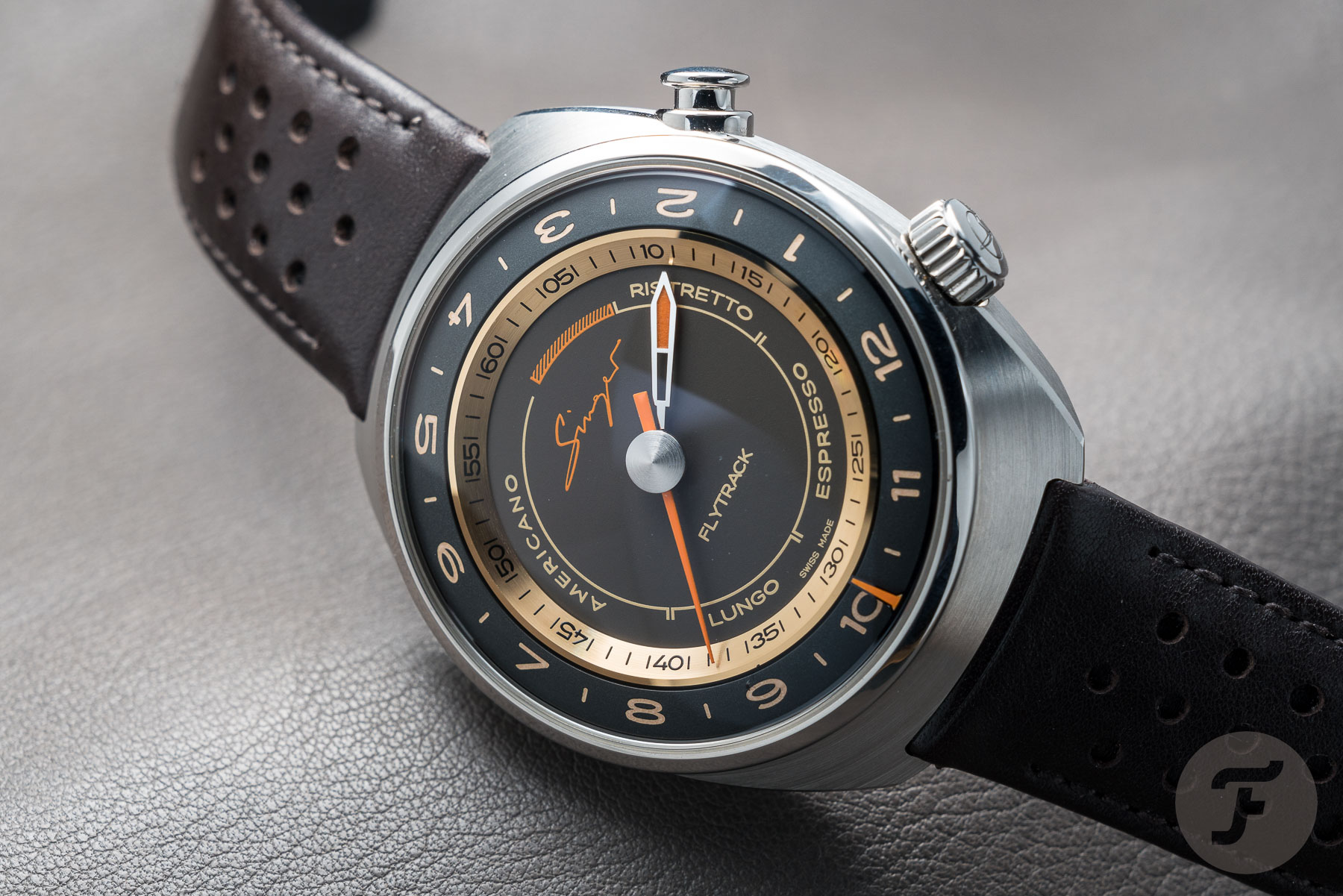 Apart from the Zenith El Primero Retrotimer, which featured a subtle red mark on the dial for cooking pasta al dente, I can’t recall any other watch with such a useful scale. Everyone drinks coffee nowadays, and more and more of my friends are getting themselves one of those impressive espresso machines. However, buying such a machine doesn’t guarantee you a good cup of coffee. First, you need to grind the coffee beans, add the right amount of ground coffee to the filter, and then the machine should work its magic. But how long should you keep that water running?

That’s where Singer’s coffee timer comes in! On the Flyback Barista’s dial, there’s a scale that tells you exactly how long you should let the water run through the ground coffee. If you like it strong, then go for somewhere under 30 seconds and you’ll have a ristretto or an espresso. If you go for somewhere between 30 seconds and a full minute, then you’ll get yourself a lungo or an Americano. These are perfect for coffee sippers like my wife, who takes at least half an hour to finish her coffee. But please, allow me to tell you about the movement behind the coffee-making magic. 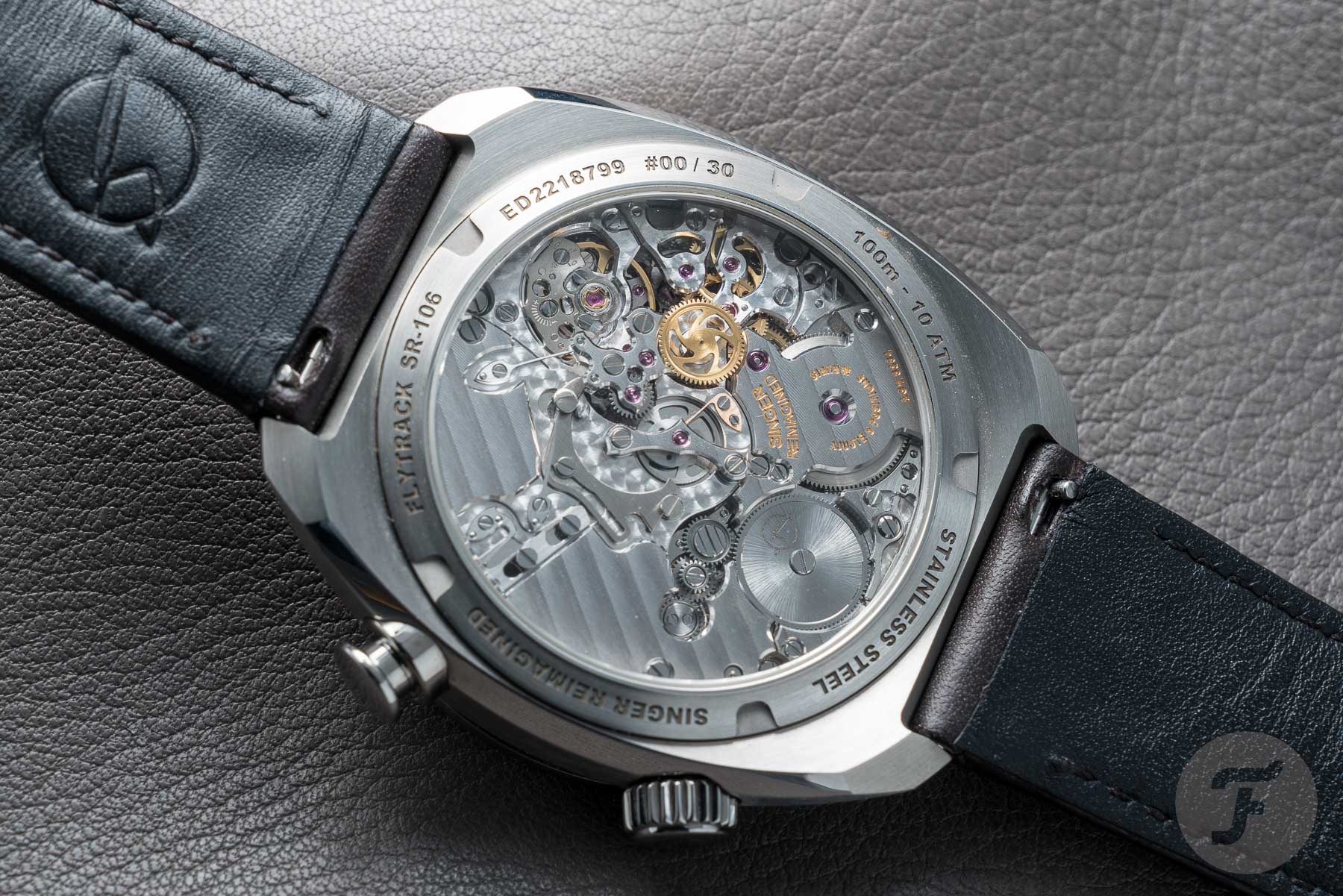 As I mentioned, the Flytrack is a simplified version of the brand’s Track1. It might lack a few features compared to that watch, but it still features a very impressive hand-wound movement. The AG6364 caliber is developed in collaboration with Agenhor and shares its architecture with the impressive Agengraphe found in the H. Moser Streamliner Flyback Chronograph. It’s made up of 314 components, including 49 jewels and two barrels, the latter of which provide roughly 60 hours of power reserve. But its main feature is certainly the flyback and zero-reset function that’s operated through the button on the upper-right side of the case. 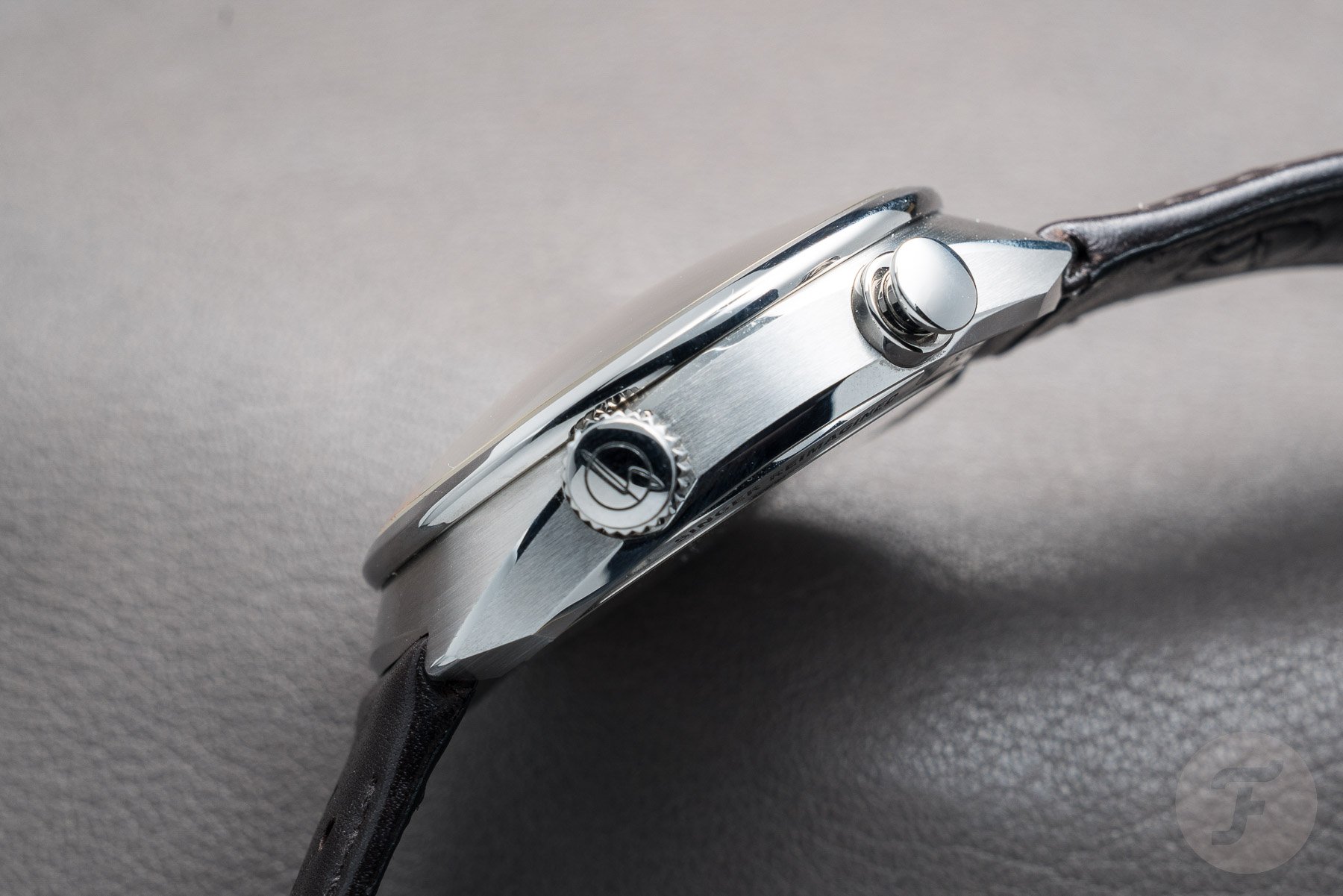 If you press and hold that button, the seconds hand will reset to zero. As soon as you release it, the hand will start running again, and you’ll be able to create the perfect cup of coffee. And don’t worry, because the movement will keep running, so this operation won’t effect the time. The operation of the chrono pusher feels very punchy, and you can actually sense the mechanism at work backstage. It’s a very satisfying and enjoyable experience, so beware, this watch might actually increase your coffee consumption! 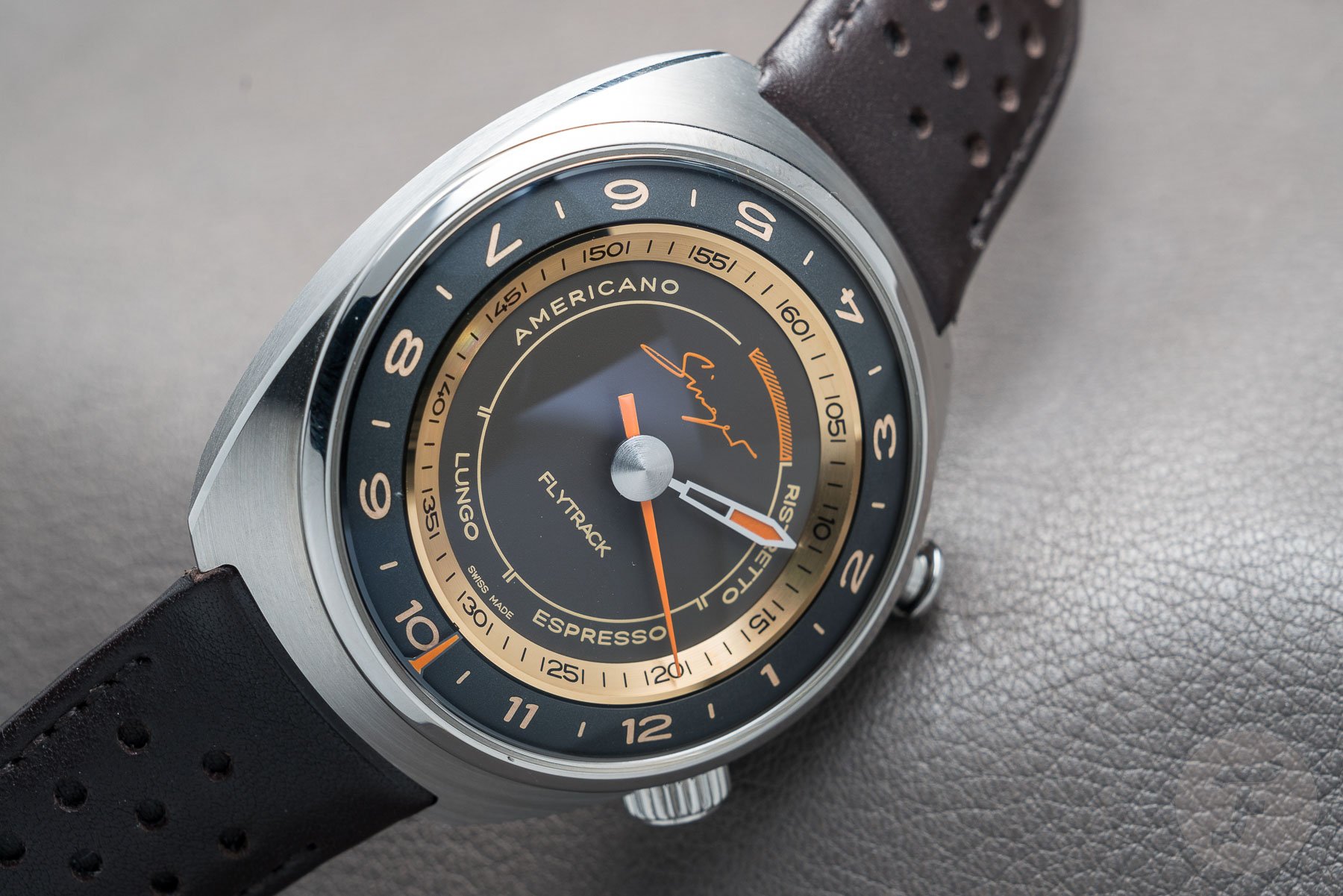 It was understandable, of course, for Singer to bring out the Flytrack collection with three classic chronograph scales first. But I really think the barista scale is such an awesome addition. It connects incredibly well with the brand’s creative and playful design language. And, above all, it turns the mechanical chronograph into an everyday tool that you use to create your best cup of coffee yet.

What do you think of the Singer Reimagined Flytrack Barista? And what kind of scale would you like to see on a chronograph? Let me know in the comments below.