You would think that Yema would make a lot of noise when it’s about to release a diver with a 300m depth rating, a helium escape valve, and in-house movement for less than €1,000! Well, I would, I can tell you that. And yet, the new Meangraf Sous-Marine really snuck up on me.

I have to say that the release of the Yema Meangraf Sous-Marine Y60 was a surprise. First of all, it was not distributed via the usual channels. It reached me initially as an offer tailored for Yema Privilege members. Luckily, I just happen to be one. 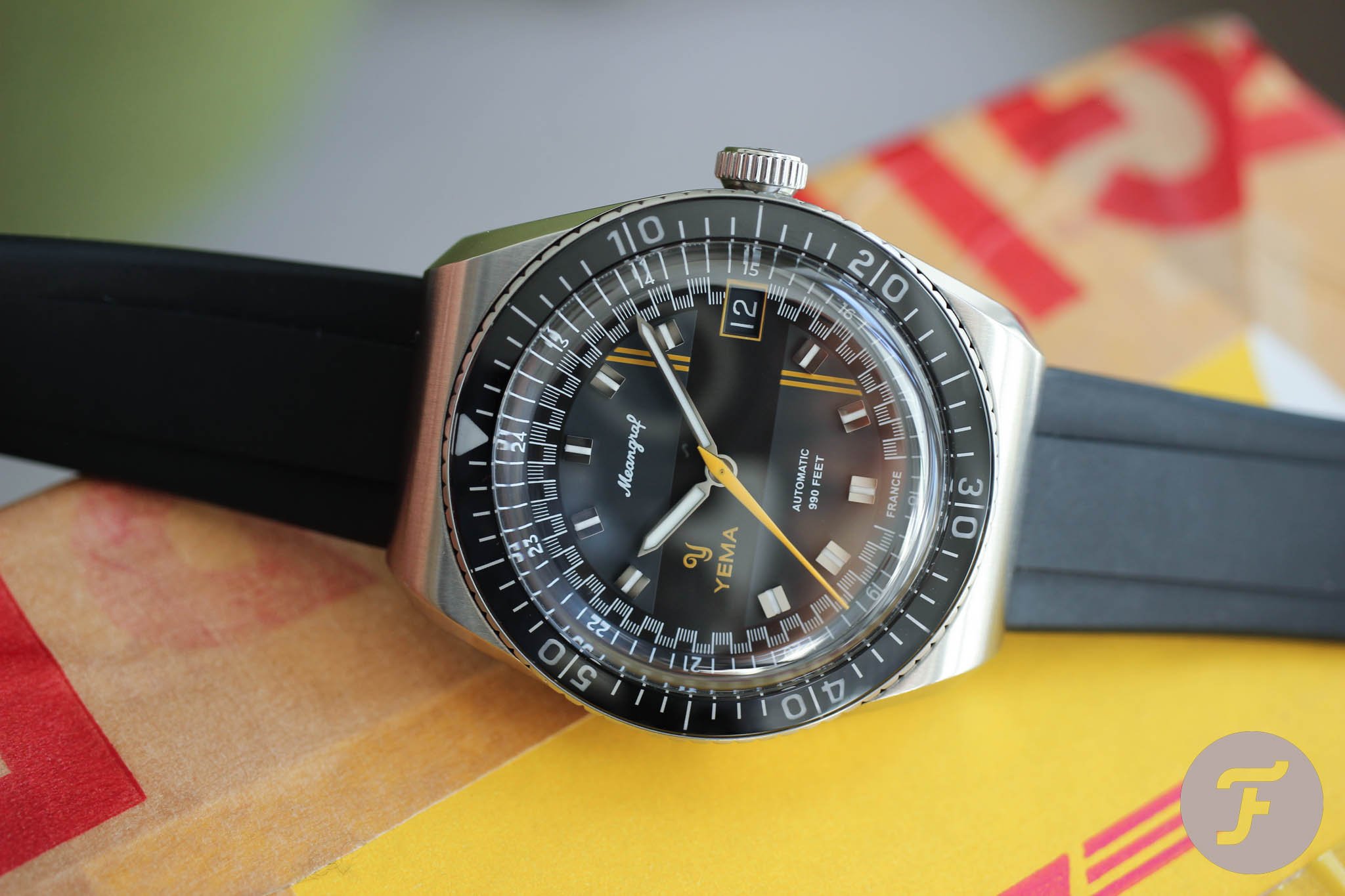 Since developing a childhood fascination with everything branded Citroën, I have considered French people special. Their genuine creativity was always so daring, it often made my brain just shut up and look with eyes wide open. And the Yema Meangraf Sous-Marine Y60 that I saw in the email was so interesting, I couldn’t even grumble about the unusual release strategy. The novel diver from Yema is open for pre-orders from April 7th to April 15th for loyal customers only. If the Y60 isn’t available today, it means that all 250 pieces of the limited run are already sold out. The new batch is not planned for any earlier than next year. Now, with those essentials covered, let’s have a look at the watch.

I politely asked Yema to send me a yellow Meangraf Sous-Marine Y60, but the folks there surprised me by sending over both colors. Honestly, I have to say I was very clear in my preference after studying the pictures. I didn’t ask for the R60 because the white elements on the dial were like a punch to the eyes. My experience in real life further confirmed that, so I put R60 aside. For me, the R60 has too much contrast, which makes the overall feeling a bit disturbing. On the contrary, the gray/black dial on Y60 is consistent, and all of the elements gently play off one another. The dial is busy, but not unsettling. Rather, it triggers my curiosity. 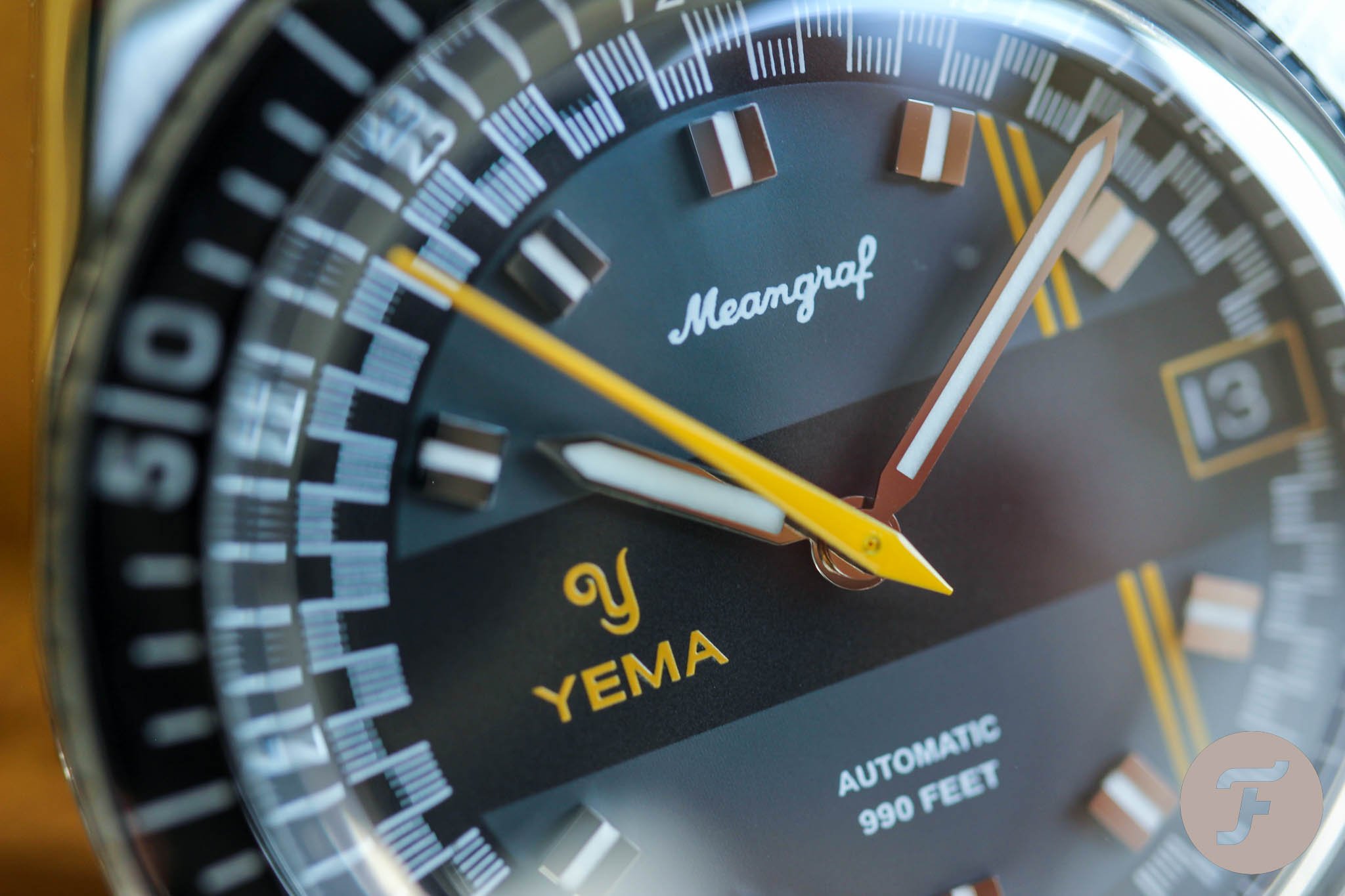 There is so much to talk about because everything is creative and fresh. The Meangraf inscription at 12 o’clock is beautifully lettered, but the font could either be a hair thinner or a hair larger for balance. The Yema logo doesn’t occupy the premium spot, but rather, moves down and left to the 9-o’clock position. Nice touch. It reminds me of a mature person who doesn’t need to steal all the attention, leaving the spotlight to “youngsters” and watching the show from a quiet corner.

The Yema logo’s position at 9 o’clock isn’t random. It sits in the thick central black stripe. If you look at the dial from a distance and focus on the yellow elements, the Yema logo looks like it’s swaying on a seesaw with the yellow-boxed date. The white numerals on the date disc are printed on a black background and sit perfectly high. I actually had to check twice to make sure the date wasn’t printed right on top of the dial. 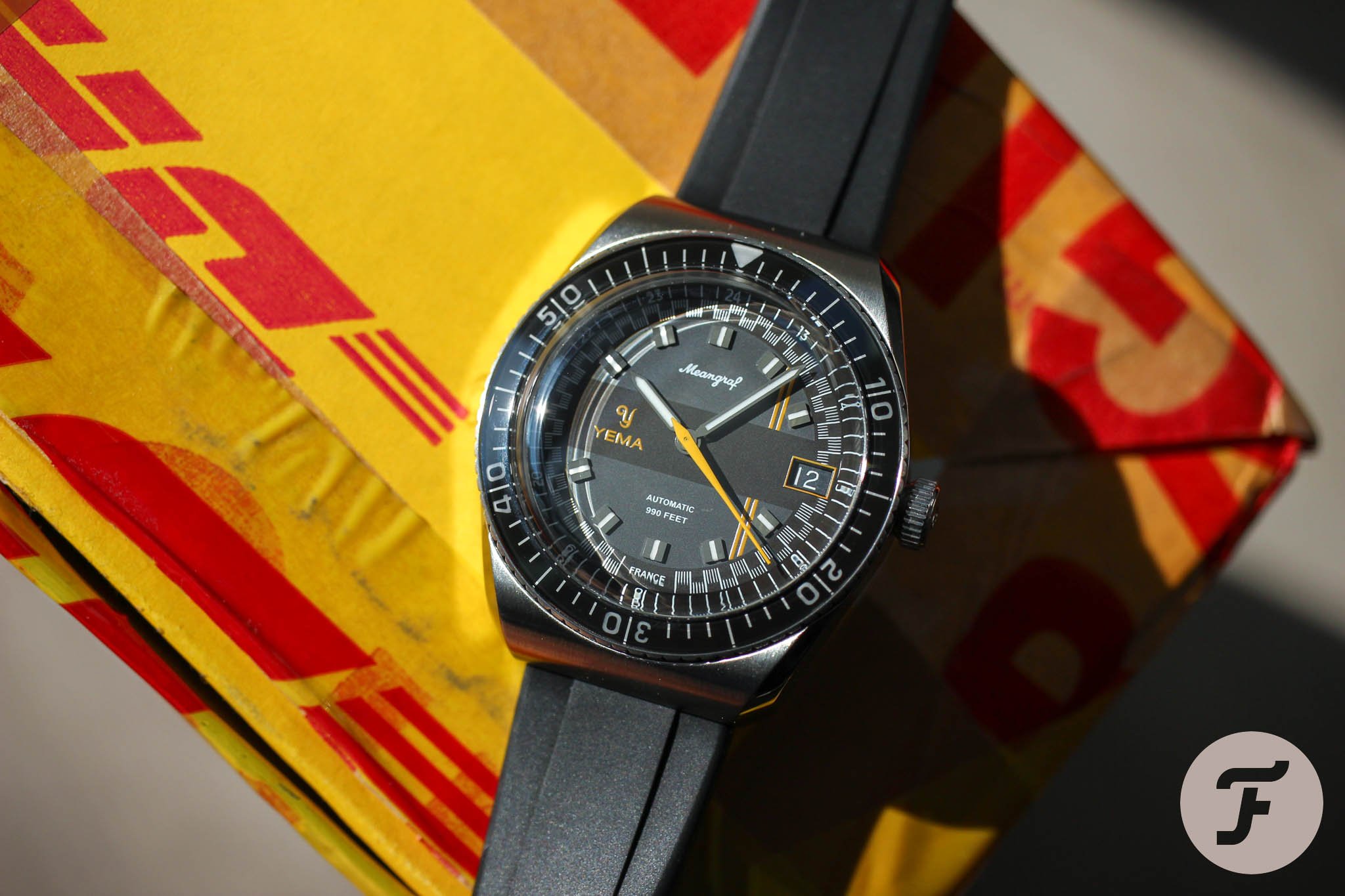 A racing-spirit “Tintin” seconds track can either confuse or amuse, especially on a diver with a helium escape valve. Personally, I’m amused, and I’ll tell you why. Usually, you have a dial that abruptly hits the case wall. If you want to do it in an elegant way, you throw in a flange to fill the gap and clean up the look around the edge of the dial. Yema did that too.

The minute-calibrated flange, or rehaut, is the real cherry on the Meangraf Sous-Marine Y60 cake. It looks to be of good quality, and it has a major positive impact on the overall visuals. Not only does it bleed into the “Tintin” track, but it also perfectly links with the bezel’s minute graduation. If you are looking at the Sous-Marine Y60 from the top, it looks like there are no barriers, and the indexes flow from the depth of the dial to the edge of the case. I don’t recall that kind of strong visual effect on any other watch. It creates the impression you have indexes as long as 5-7mm. Intentional or not, that’s the real deal for me. 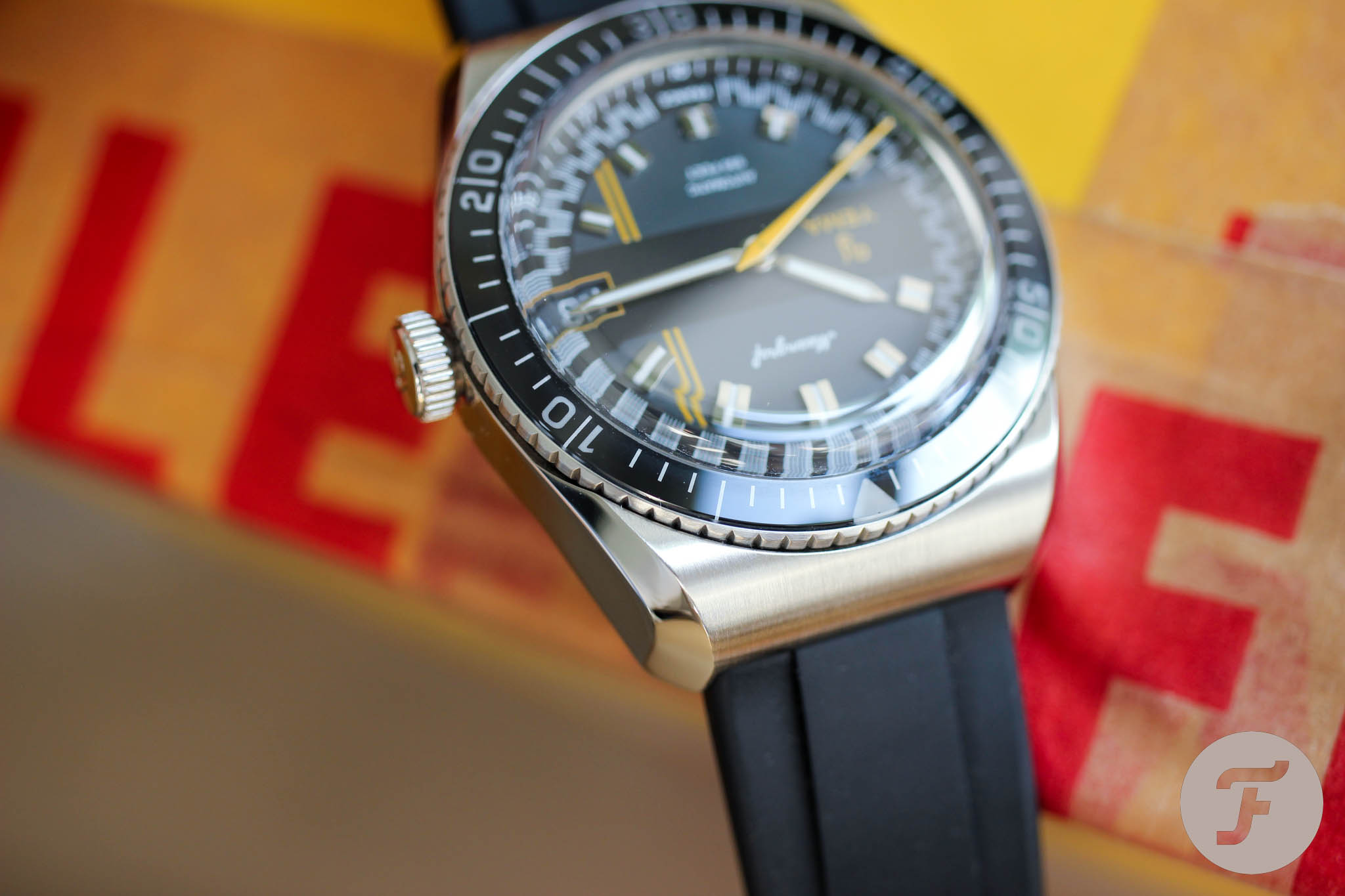 That genuinely fascinating optical effect could be achieved also thanks to the special bezel. The minute hashes are not printed on top of it but lie deep underneath on an aluminum insert with luminous markings. There is a scratch-resistant sapphire insert above it, so it really creates an illusion of the dial indexes stretching even further. On top of that, the sapphire bezel gives the watch a nostalgic feel that only Bakelite bezels could offer. Bi-directional, easy rotation with clicks is a great plus for me. And you don’t need to be afraid of it turning randomly, as the bezel is interestingly integrated/sunken into the case.

… slightly beefy, but different, and dangerously wearable at 39mm in diameter.

I was pleased by the crown. I bet that all the seasoned Yema collectors instantly recognized the characteristic crown in Yema “Daytona” style. It’s broad and flat with a thin groove around the edge. There’s no surprise on the case back, as on it you’ll find the good old majestic Yema emblem engraved. With most brands, an in-house movement would be a surprise in a watch selling for right around €1,000. Not so with Yema — been there, done that. The automatic second-generation YEMA2000 movement powers the Meangraf Sous-Marine. This 29-jewel caliber provides hacking seconds and a 42-hour power reserve. It beats away at a frequency of 28,800vph and is regulated to ±10 seconds per day.

The Meangraf Sous-Marine Y60 comes with a classic leather strap or the new rubber FKM Viton strap. The deployant clasp is nice and modern, albeit maybe a bit sharp and angular in comparison to the “wavy” case. The strap is very comfortable, and it really repels dust. But when hooked in the first holes, the loose end tends to slide out. It really bothered me. Hopefully, Yema can address this in the future.

I would still buy it on the rubber strap because the watch looks really good on it. If I was about to take the helium escape valve to the bottom of my bathtub, I would definitely want to have it on rubber. But the vintage leather strap looks like a better option for a lazy day. If you are the terrestrial type, you can get the Meangraf Sous-Marine Y60 for €150 cheaper this way. Again, this is a helium-escape-valve diver with a 300m depth rating, an in-house movement, and an interesting case with a sunken aluminum/sapphire bezel. And you get all that for less than €1,000 on leather. That’s a description of a hot offer.

For more information or to pre-order your own, head on over to the Yema website. Pre-orders will remain open through April 15th.

Hot Topics
Introducing: The Omega Speedmaster Super Racing With Spirate System
165 comments
Design Vs. Specs — Which Is More Important To You When Buying A Watch?
87 comments
New Release: The Limited-Edition Seiko Prospex SLA067J1 Diver
63 comments
My Predictions For New Omega Speedmasters In 2023
60 comments
The Best Independent/Microbrand Alternatives To The Rolex Explorer In 2023
52 comments
Popular
A Question From A Reader: “Which Modern Speedmaster Is Closest To The Original Moonwatch?”
Robert-Jan Broer
14
Rolex Submariner – Historical Overview Of A Diving Legend
Robert-Jan Broer
22
10 Tips For Better Watch Photography
Bert Buijsrogge
12