Context – political, sociological and cultural. When I put on any vintage watch I try to imagine what it was like to wear that particular watch back in the time it was new and fresh. When I put on the Harvel Date-O-Graph in the morning, I just can’t un-see the advert from 1943 published in LIFE magazine. In it, across half a page, there is a detailed shot of a hand holding a burning cigarette between the fingers. You can also see a bit of the shirt sleeve sticking out from beneath a sharply ironed jacket. And of course, the Harvel Date-O-Graph is there too. 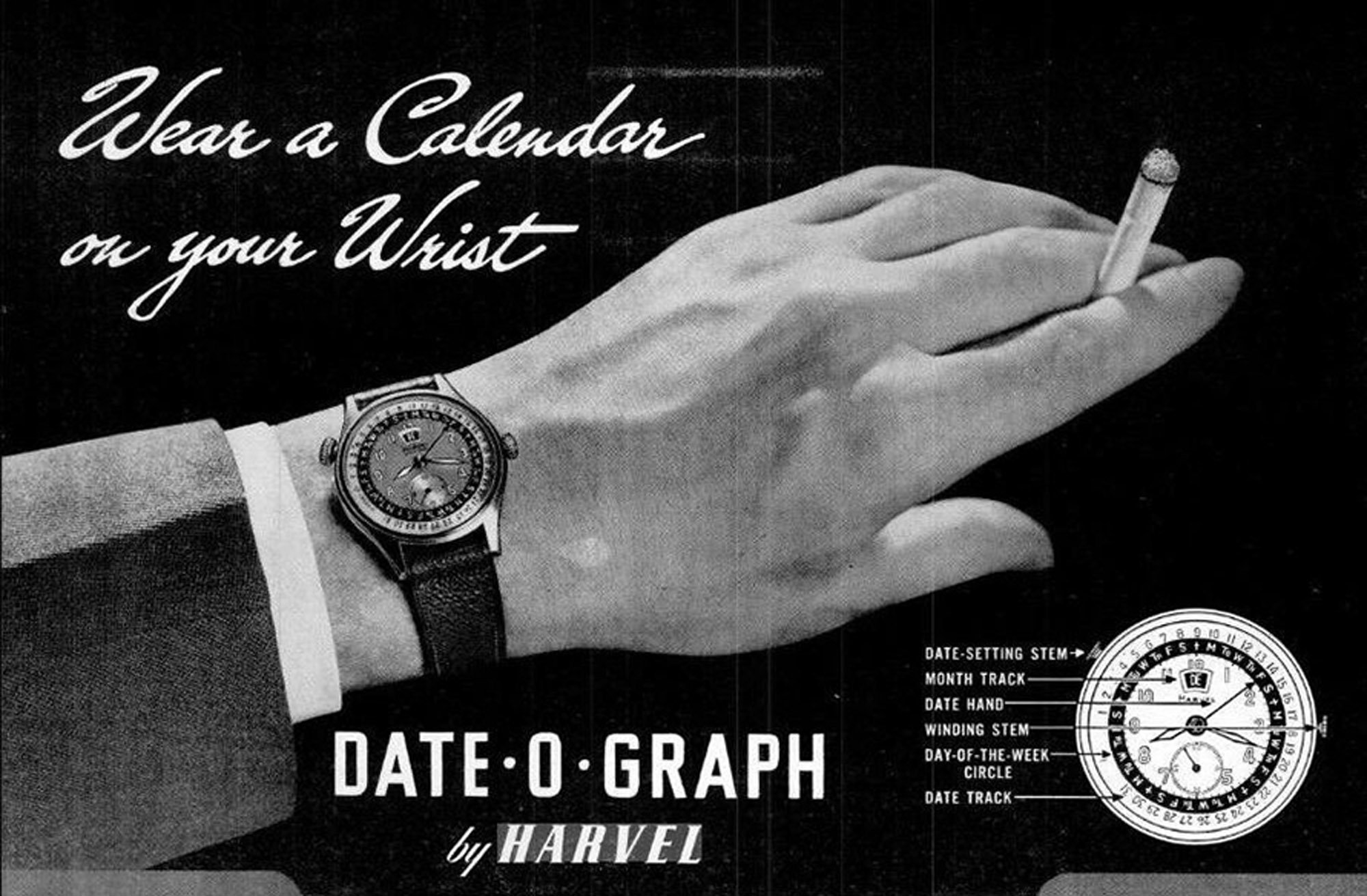 I instantly imagined some important or wannabe important businessman sitting on an airplane filled with smoke, with a bunch of other passengers on their way from New York to LA. Looking at the advert today, it is unimaginable for my generation (I turned fifteen in 1998) – to sit on a plane with smoke everywhere in the cabin. Your eyes stinging, throat choking, feeling the urge to scrape off layers of ick from your clothes. I like to imagine this Harvel Date-O-Graph was onboard during such cloudy trips. Anytime I put it on today it reminds me how fragile, short and ephemeral the present moment is. It makes me think of how society can change in decades to come. We don’t know yet, but I am sure my Harvel Date-O-Graph will be there to witness it. Remembering what it was like in 1950, 2020 and even 2100. 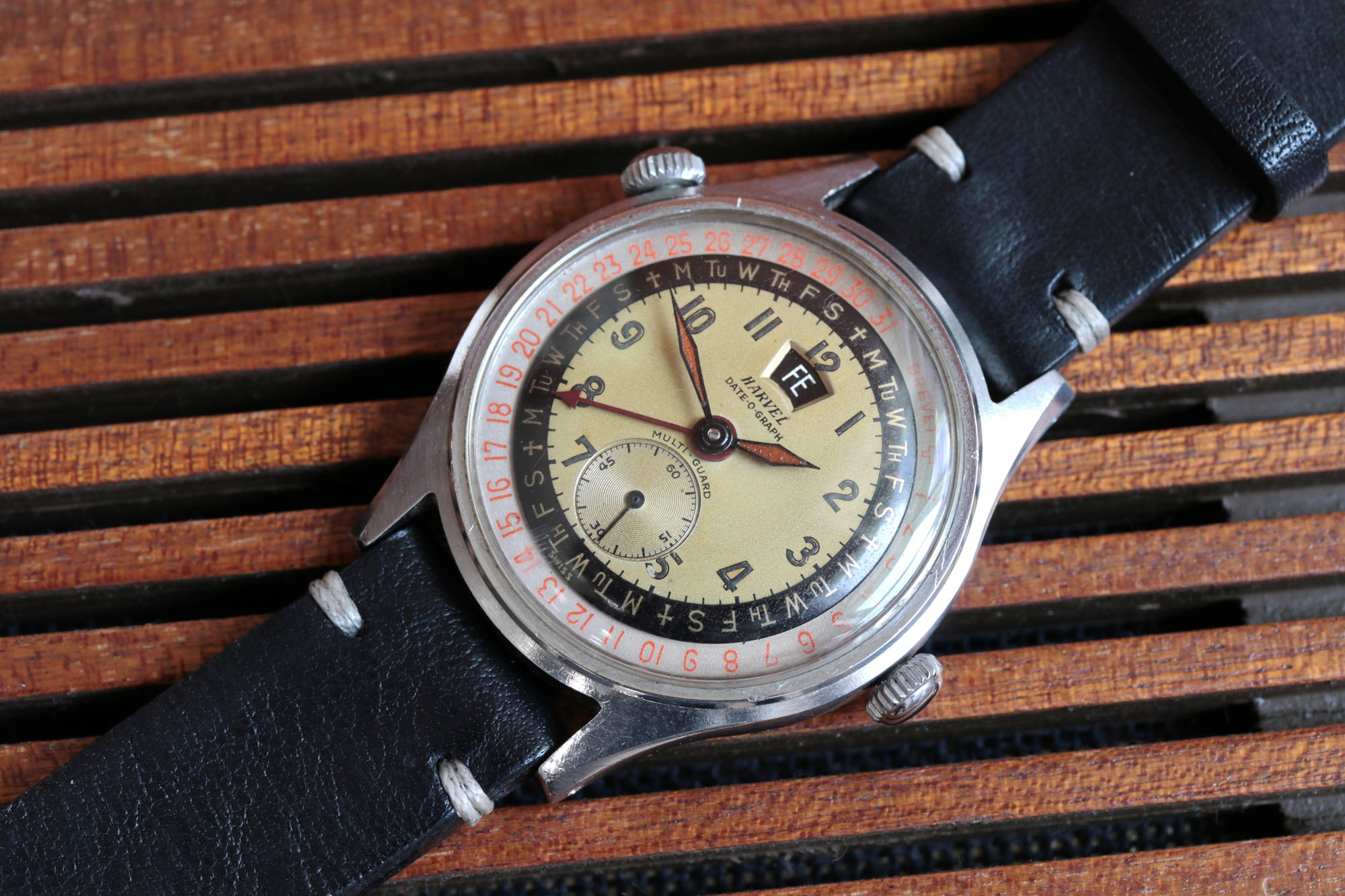 Harvel – The watch that times the stars.

Harvel. Very masculine sounding brand name. Strong. Self-confident. Registered in 1933, based in New York 5th Avenue, moved later to the nearby Rockefeller Center. Their watch movements are signed HARVEL WATCH Co. and you should find HXH or HXN import codes engraved on it. As clearly visible on many adverts, Harvel used many “leading stars of stage, screen, and radio” such as Guy Lombardo, Sammy Kaye or Hildegarde as their promoters. 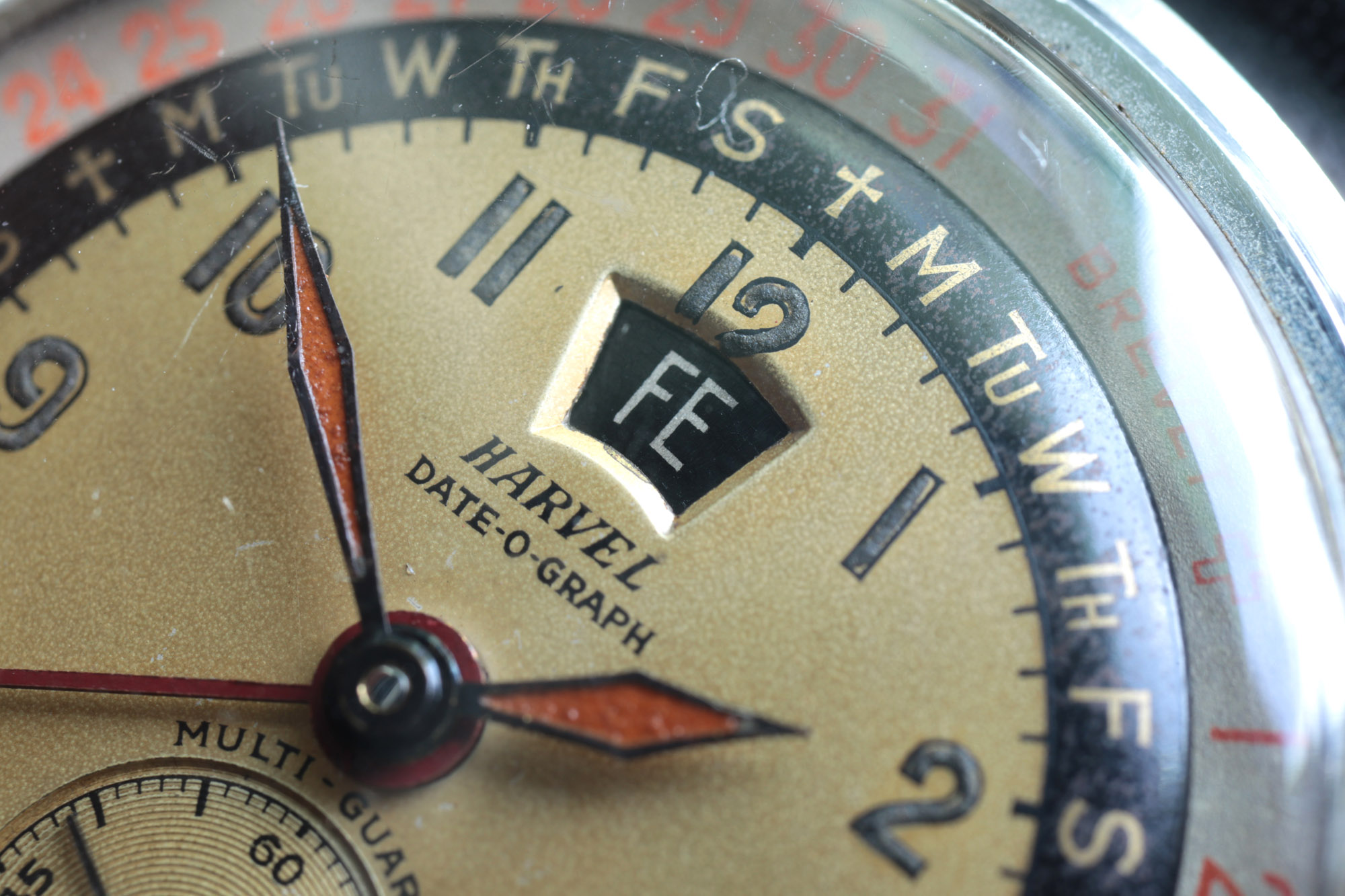 A thin line between patina and wreck

I stumbled upon the Harvel Date-O-Graph accidentally when looking for some unusual date watches maybe a year ago. Today I know there are quite a few similar executions of that watch design with brands such as Eloga, Printania, Birma or even Glycine on the dial. You can find some of them on eBay, but the quality of their dials often reminds me of a car sitting forgotten in the back-yard for three decades. One thing worth noticing: it is hard to find two similar Harvel Date-O-Graph pieces. Every single example I saw over the past year varied from one to the other, showing different vivid color tones or diverse patina gradients developed on the dial. It makes spotting any new Harvel Date-O-Graph a completely new experience. 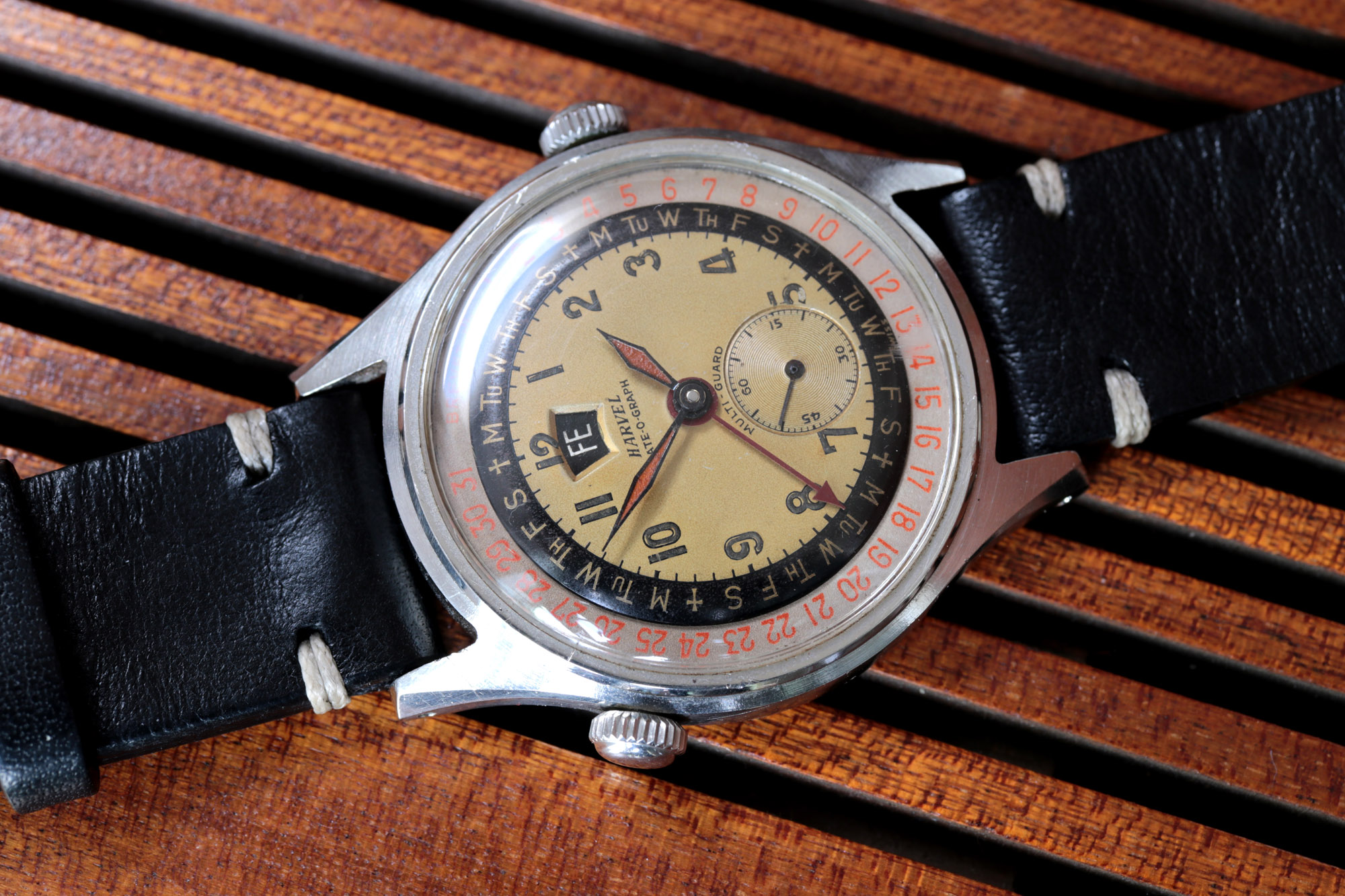 Wear a calendar on your wrist

This is the headline Harvel used when advertising the Date-O-Graph. The calendar might seem pretty generic, but when you start paying attention to the details you discover how unique it is. Let’s start with the window showing the month of the year. The inverse month track shows only the first 2 letters of the month, an unusual feature. It is refreshing to see AU for August or DE for December. The only two months being displayed with three letters are May and July. To set the month you don’t need to pull out the crown at ten. You can just twist it in both directions and the name of the months roll accordingly. 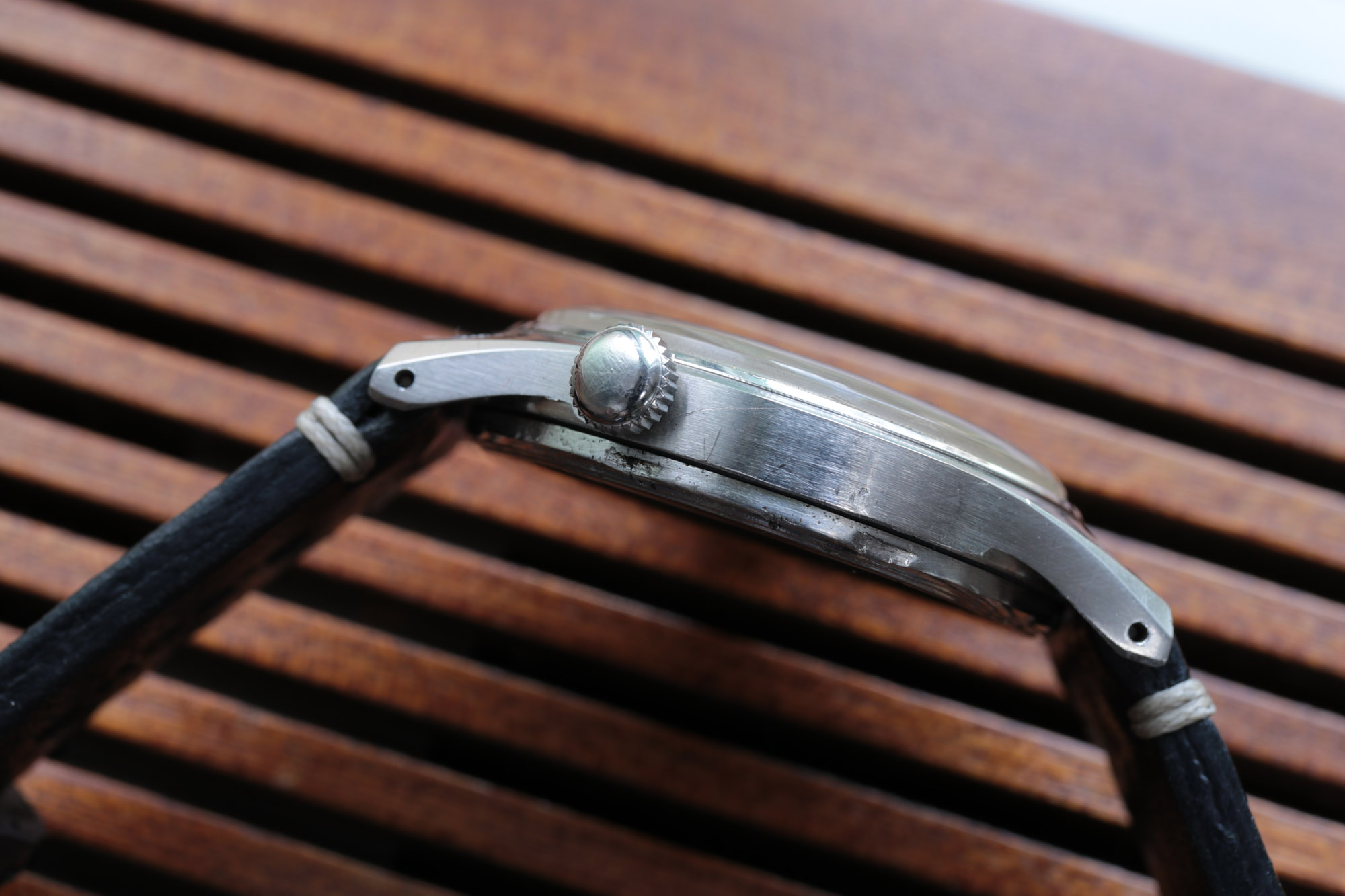 The only, but notable issue I encountered with the Date-O-Graph is connected to this date-setting stem. Sometimes due to random moves of the wrist that cause the crown to slide below my shirt sleeve, I find myself a month ahead or late. Something worth mentioning for all watch purists, but not really a big issue for me. At least it gives me the opportunity to play with my Date-O-Graph.

What got me in the first instance I unboxed the Date-O-Graph was the super convex dial. Didn’t notice it before. I studied a lot of pictures of Date-O-Graphs offered online, but obviously, it is complicated to capture this type of detail. I devoted some quality time to shoot it perfectly as to be able to reproduce this genuine detail. But looking at the pictures now, even macro shots do not authentically reproduce the level of depth and plasticity the dial has. In reality, the dial is a relatively thick and chunky piece, nicely rounded and steeply thinning to the edge. The dial and especially day-of-the-week circle perfectly contrast with the date track laid visibly deeper. 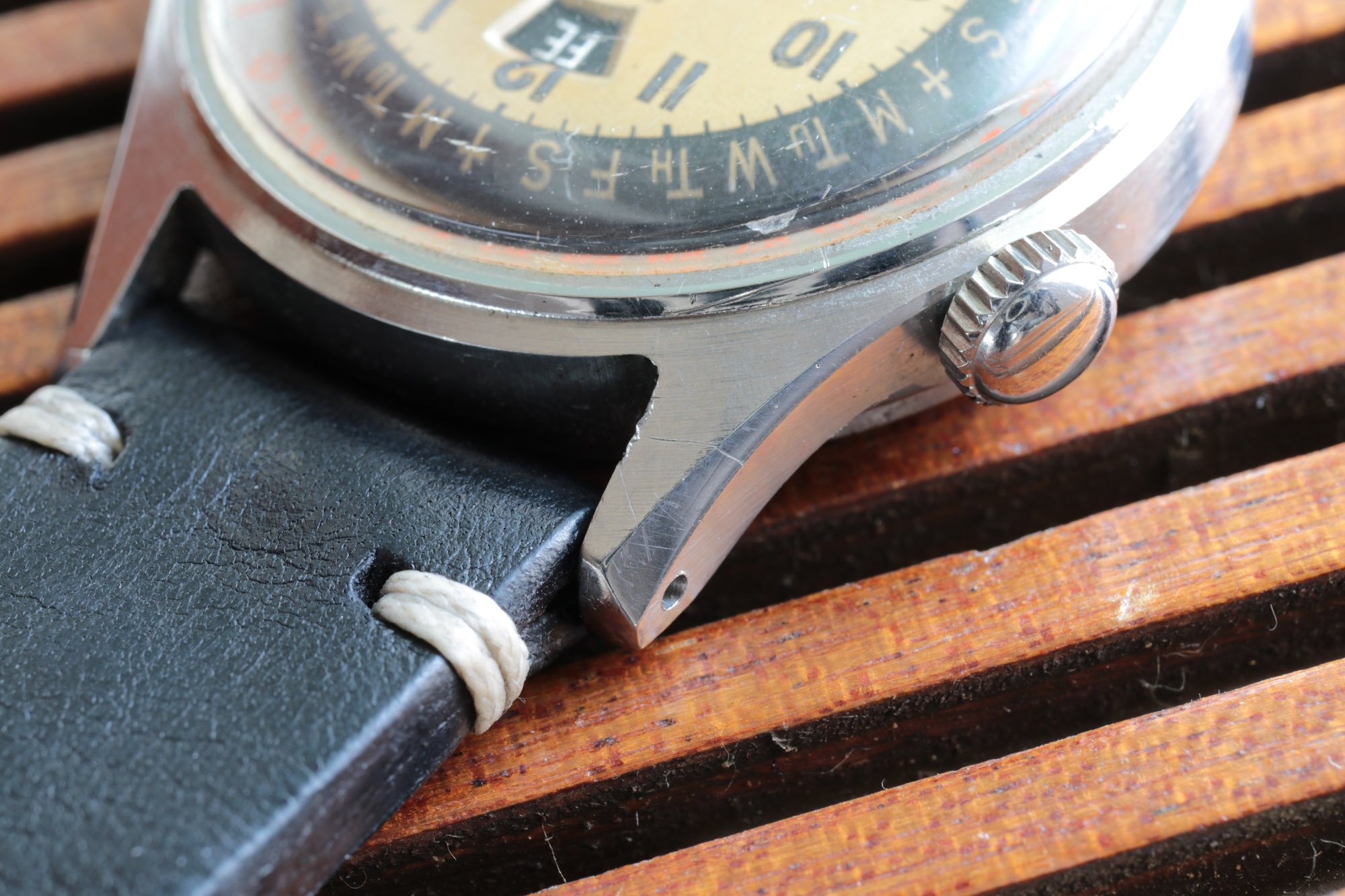 I mentioned above that details make the Harvel Date-O-Graph interesting. Look at the day-of-the-week circle. Anything special? I can’t think of a single watch brand today that would put a cross symbol instead of Sunday on it. I spent a few minutes thinking about how it got there and why. As I have no official or verified answers, I will leave my speculations out and let you do some fantasizing too. 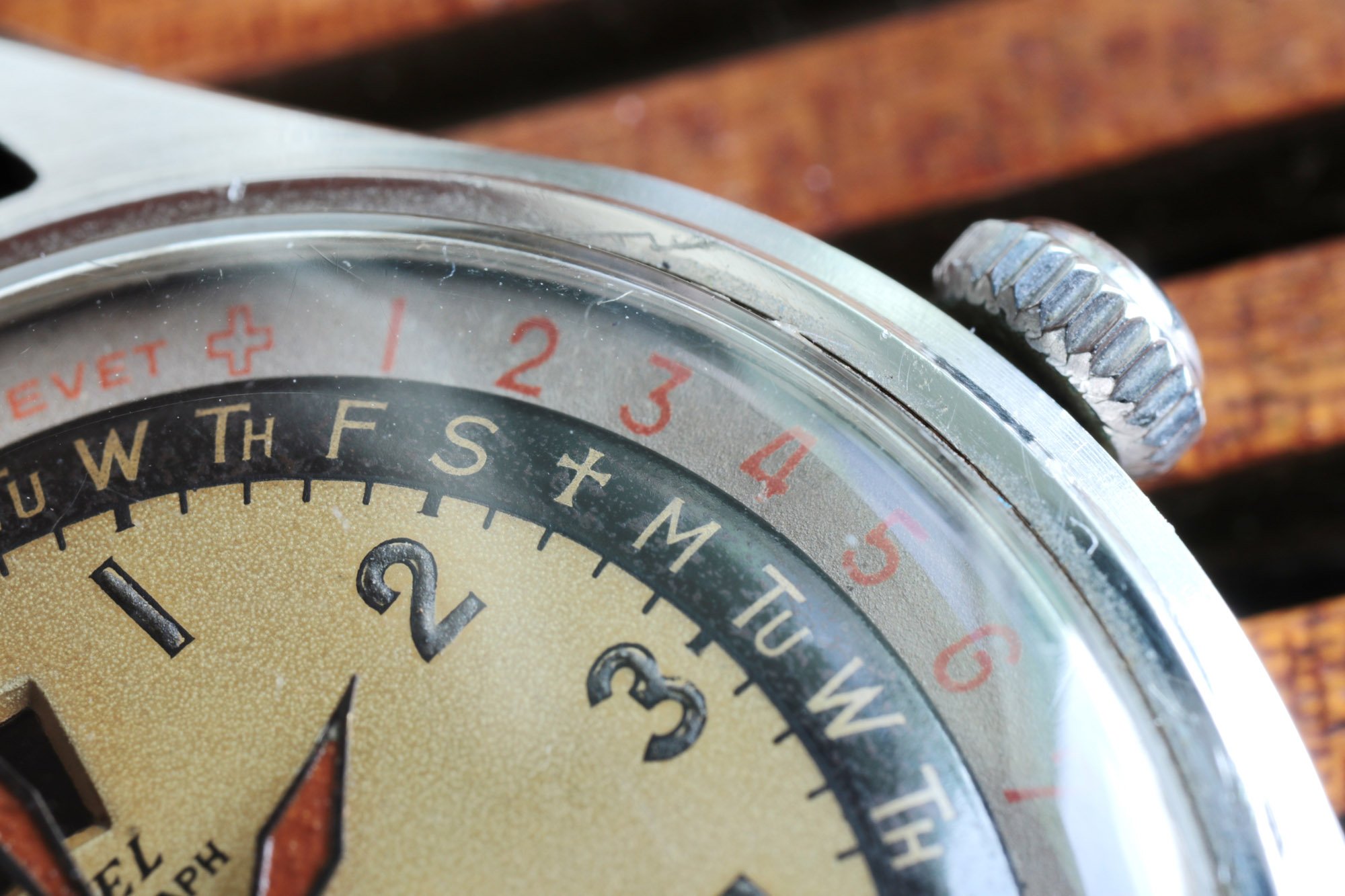 Another considerable detail puzzling my mind is the date track. To be precise, its highly lighting color. It is not orange exactly, it is not red either. It shines obsessively and attracts attention from afar. I personally named it a Harvel orange. I like the type of numerals and how they are spaced very much. The position of the date track with the BEVET inscription and symbol can be set by pulling out and rotating the crown at 10. You can turn it in both directions to easily align the date with weekdays sitting firmly on the dial. The central red date hand is operated as is usual by the crown at three. 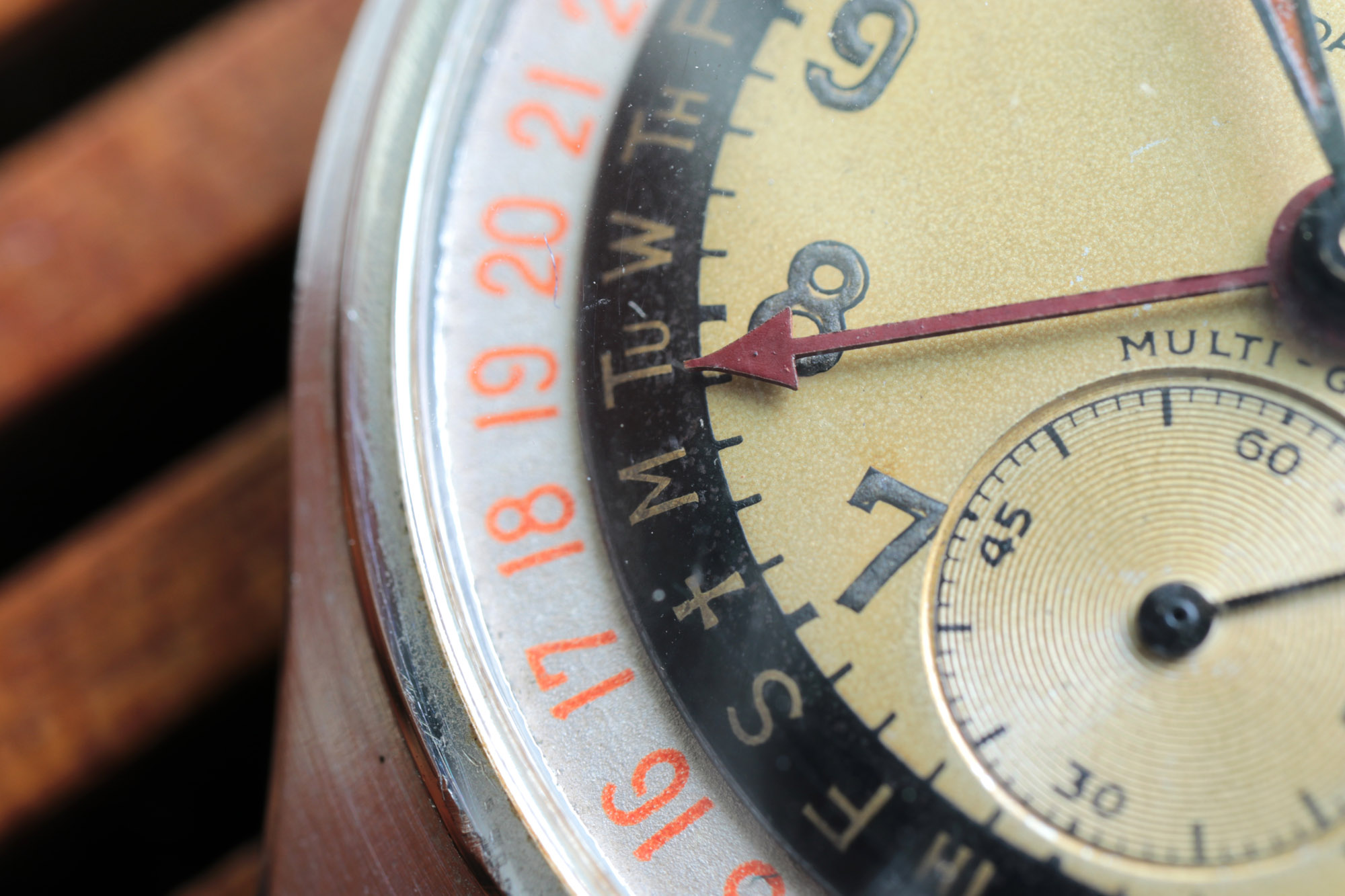 The best is yet to come. Almost every single Harvel Date-O-Graph I saw came with a Harvel signed back case. My Date-O-Graph with a pretty simple 17-jeweled manual wound FHF cal.175 is placed in an unusually signed PIQUEREZ case. After precise inspection, I was more than happy to conclude that it is one of the best-crafted 36mm stainless steel cases I have in my collection. The level of precise manufacturing is not only visible on clear lines from the frontal view, but also on the back of the watch. The lugs have the bottom outer edge cut in a very special style, producing a very delicate and gentle detail that I can imagine needs a lot of mastery to be executed properly. 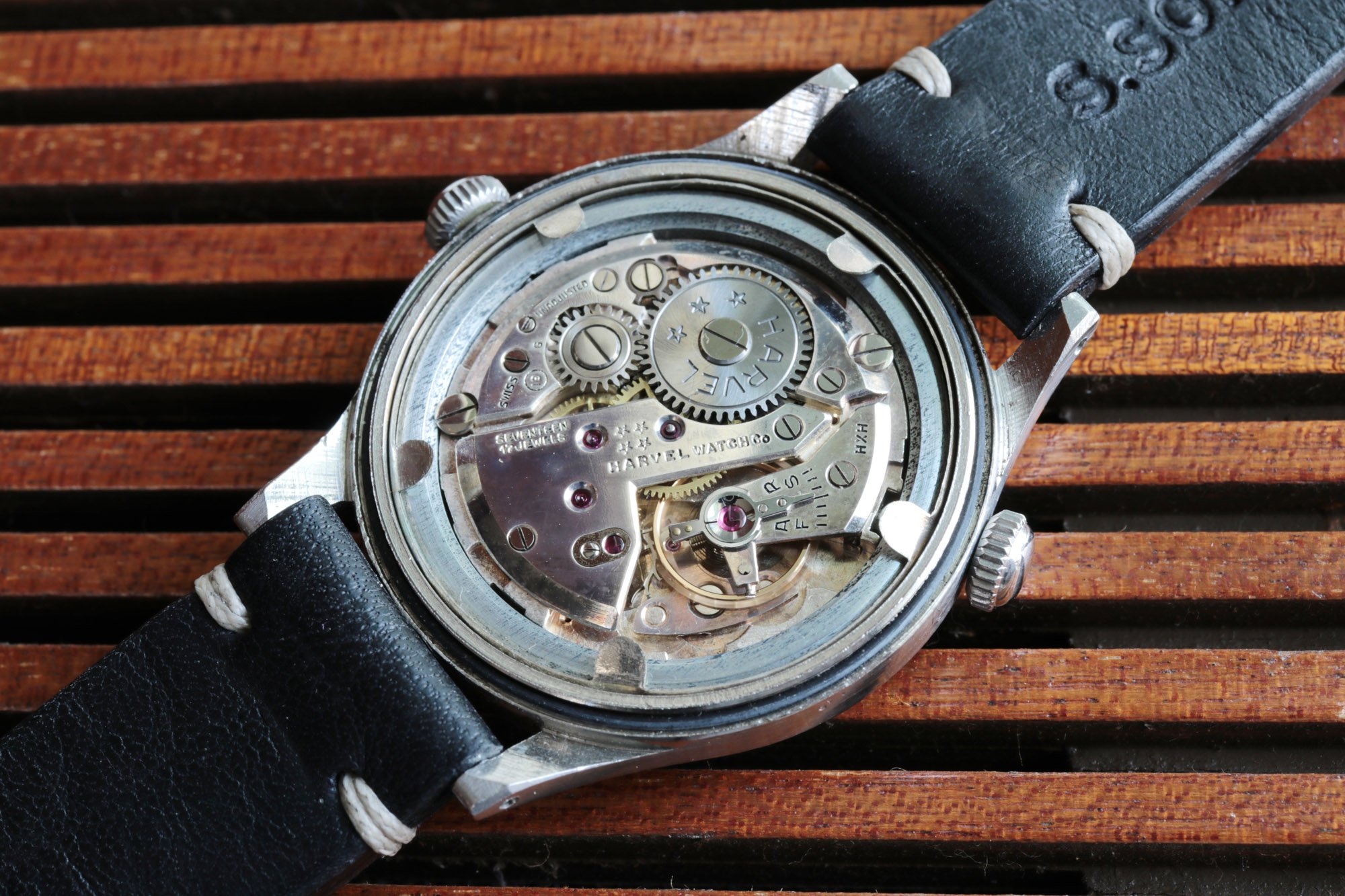 Help from collectors in Italy

My gut feeling told me that the watch case is an original, but I wanted to be 100% sure. I could not find any other example until I got in touch with three nice watch collectors from Italy. The guy I bought the watch from put me in touch with another fella that owned the watch since 2012. He connected me to a third guy I already knew from previous dealings and here we go – he confirmed he had a Harvel Date-O-Graph with the same Piquerez case. 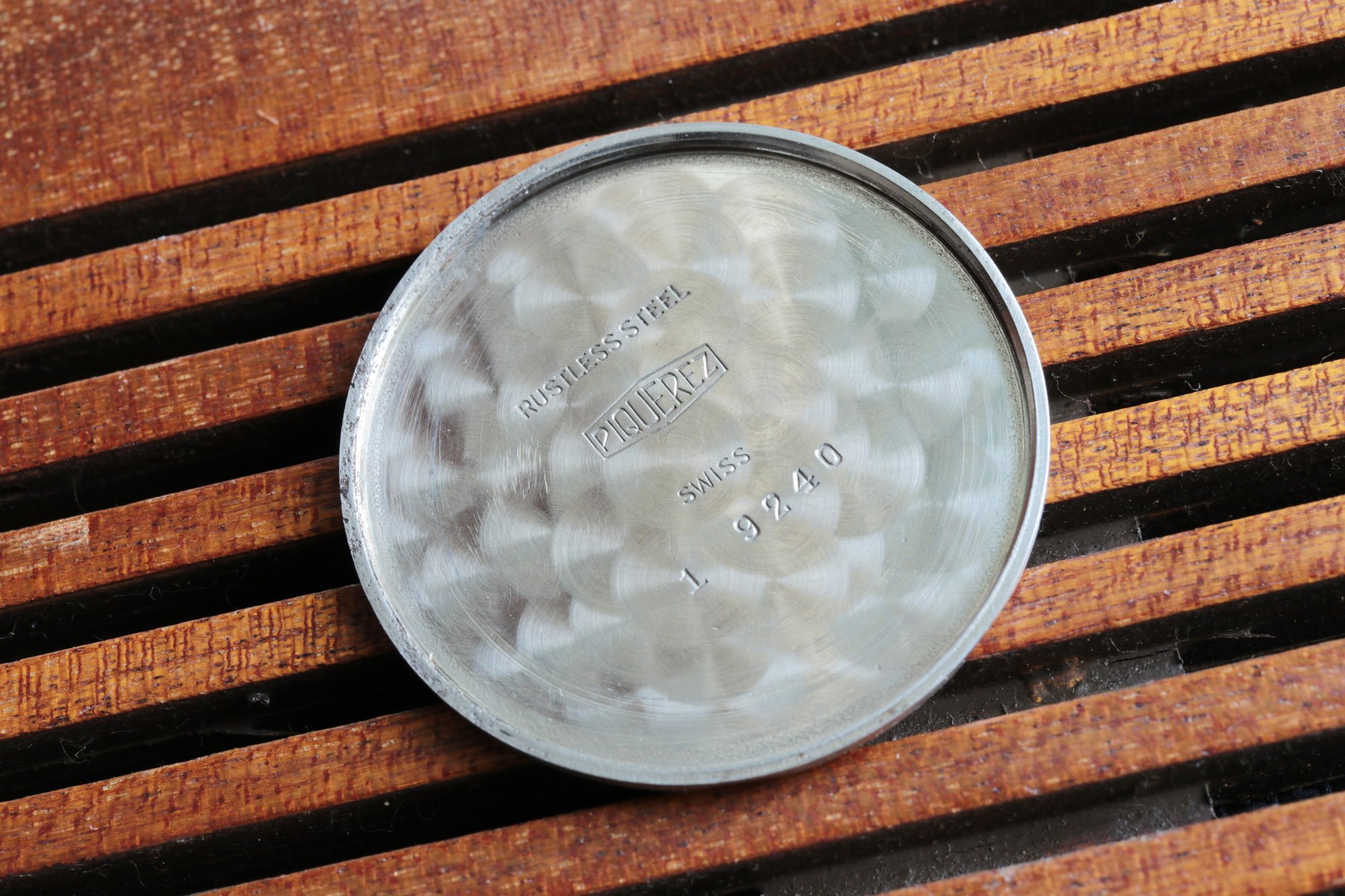 Ervin Piquerez S.A. (EPSA) achieved world fame thanks to Super Compressor cases that were in production from the mid-fifties till the early seventies. No wonder I am more than pleased to see my Harvel case signed by Piquerez. Note the RUSTLESS STEEL engraving that was used before the term stainless steel took hold. More proof of fine craftsmanship of this Piquerez case are the decent and practically invisible U-shape cuts. You can find eight of them on the very edge of the screw back case for placing the opening tool. 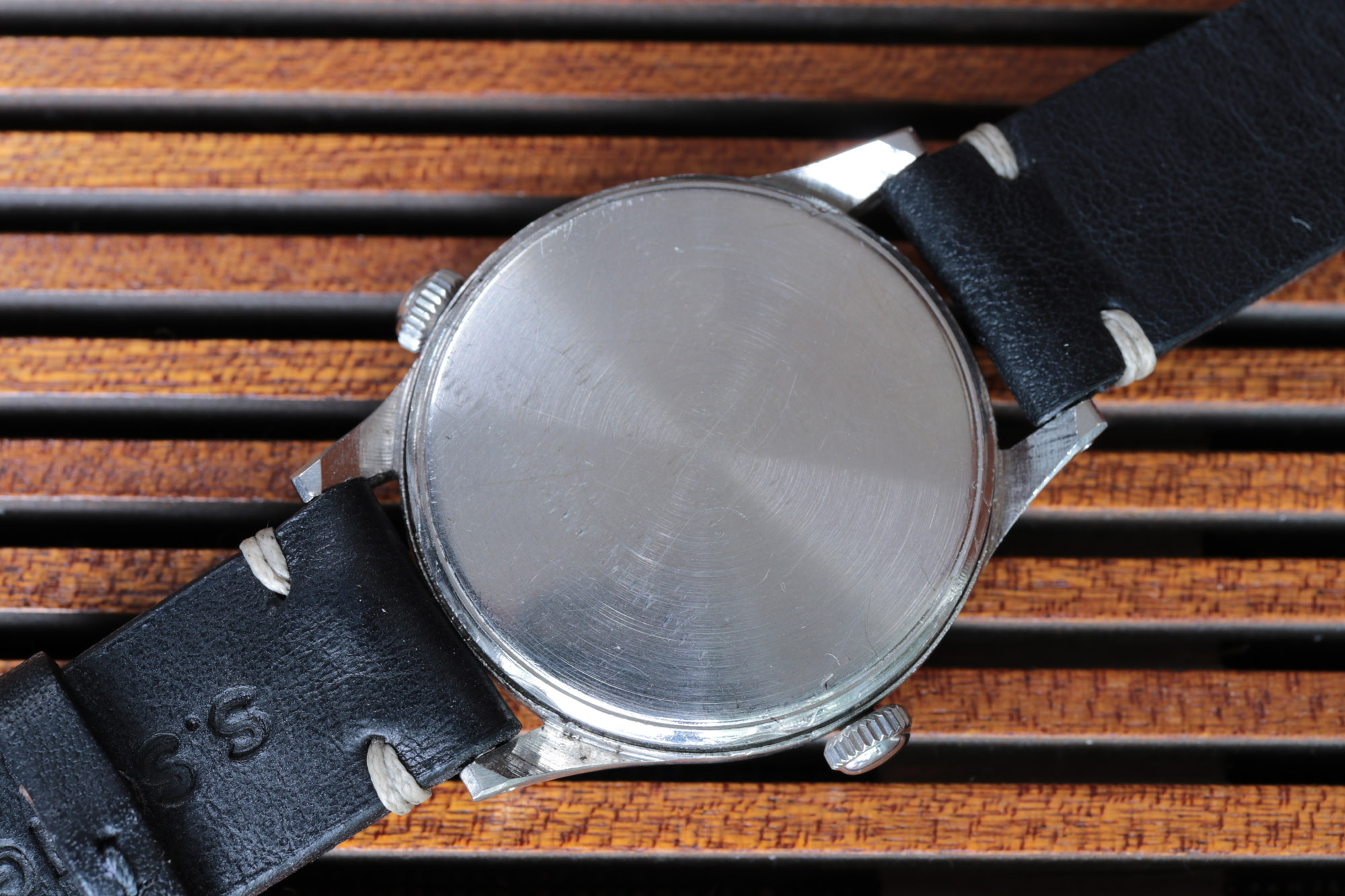 We still do not have any catalog or official pictures from that era proving this Piquerez case is original to the watch, but as we know about 3 – 4 Harvel Date-O-Graph pieces with such a case there is no reason to question it. Later Date-O-Graph models came with syringe hands, so we can assume the Piquerez case might only come with very early examples with diamond-like hands.

Do you need some more evidence of why Harvels should be on your collectors’ radar? During my research, I found out that the Mido Watch Company of America, Inc. filed a case against Harvel Watch Company Co. Mido (using Mido Multifort, Multisport or Mido Multi-Centerchrono) disputing Harvel using the Multi-Guard name above the sub-second dial. It was an expression for Harvel’s protection against water shock dust and magnetic forces. According to the final decision I googled, no “confusion on trade“ was in fact created. Simply put Harvels’ Multi-Guard name “was not held confusingly similar” to Mido’s names. 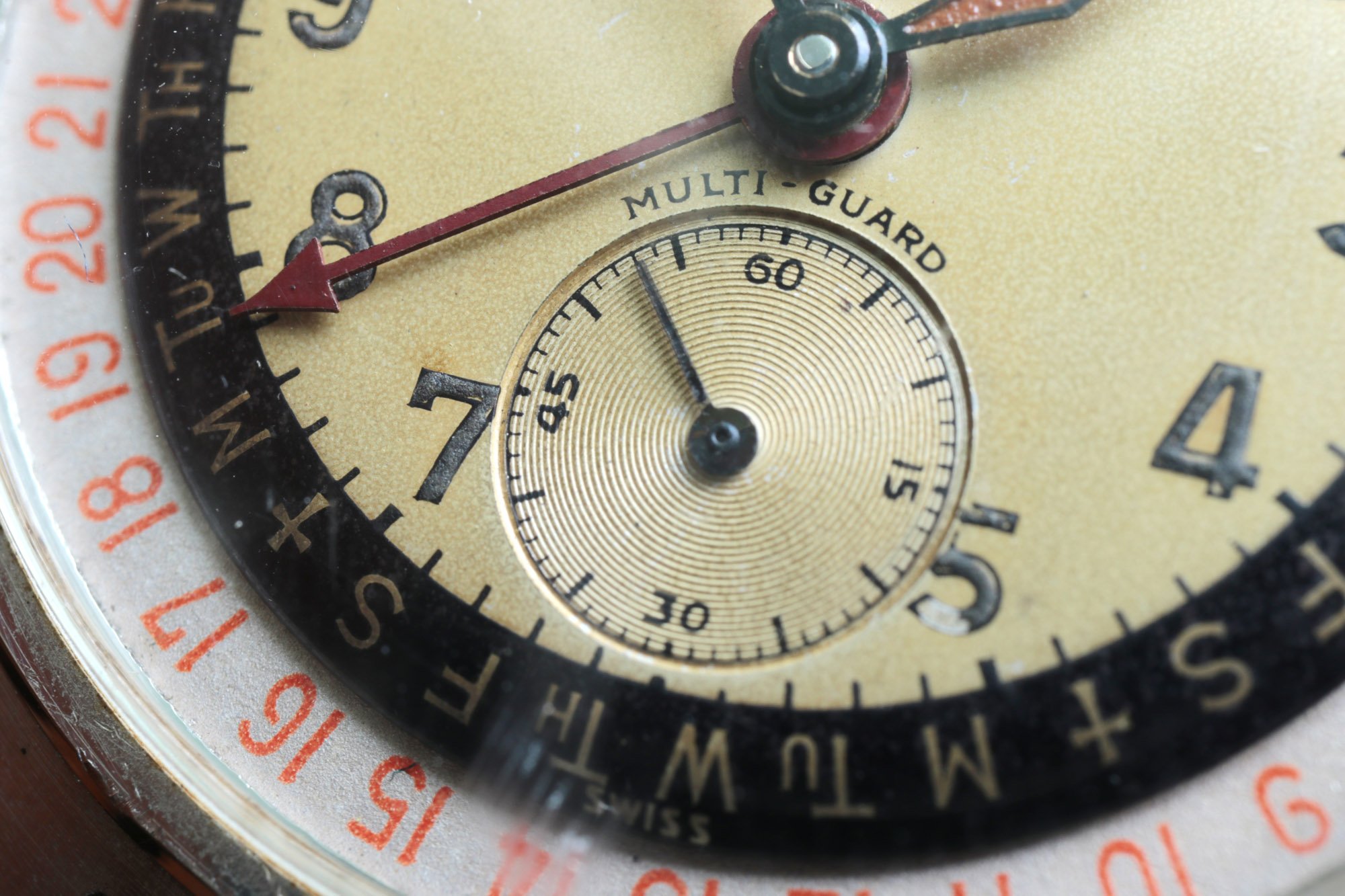 Final call on the Harvel Date-O-Graph

To be able to get such an interesting watch for anything between 700 to 1200 Euros makes it an undervalued gem. It would be a crime not to put your hands on it. For the quality of the case, the uniqueness of the dial, calendar design, and modest but audacious brand name, it is a great deal.