I’m in a good mood today; a very good mood indeed. “Why,” you ask? Well, you may have recently noticed my continued love affair with the Swiss masters of avant-garde, URWERK. So when we get wind of a new launch, my happiness levels inevitably skyrocket, as is the case today! So I’m delighted to introduce you to the new URWERK UR-220 SL “Asimov”.

Let’s address the name first of all. “Asimov” all sounds very Russian, doesn’t it? Well, if that’s what you were thinking, you’d be partially correct. The name is actually a reference to the Russian-born American writer Isaac Asimov (1920-1992). The writer’s 1941 science fiction novelette, “Into The Nightfall”. To briefly summarise, the story is about the coming of darkness to the people of a planet ordinarily illuminated by sunlight at all times. It would appear that one of URWERK‘s founders, Martin Frei, was inspired by the story as it is the proud muse for the brand’s third iteration of the incredible UR-220.

On the horizon outside the window, in the direction of Saro City, a crimson glow began growing, strengthening in brightness that was not the glow of a sun. The long night had come again. 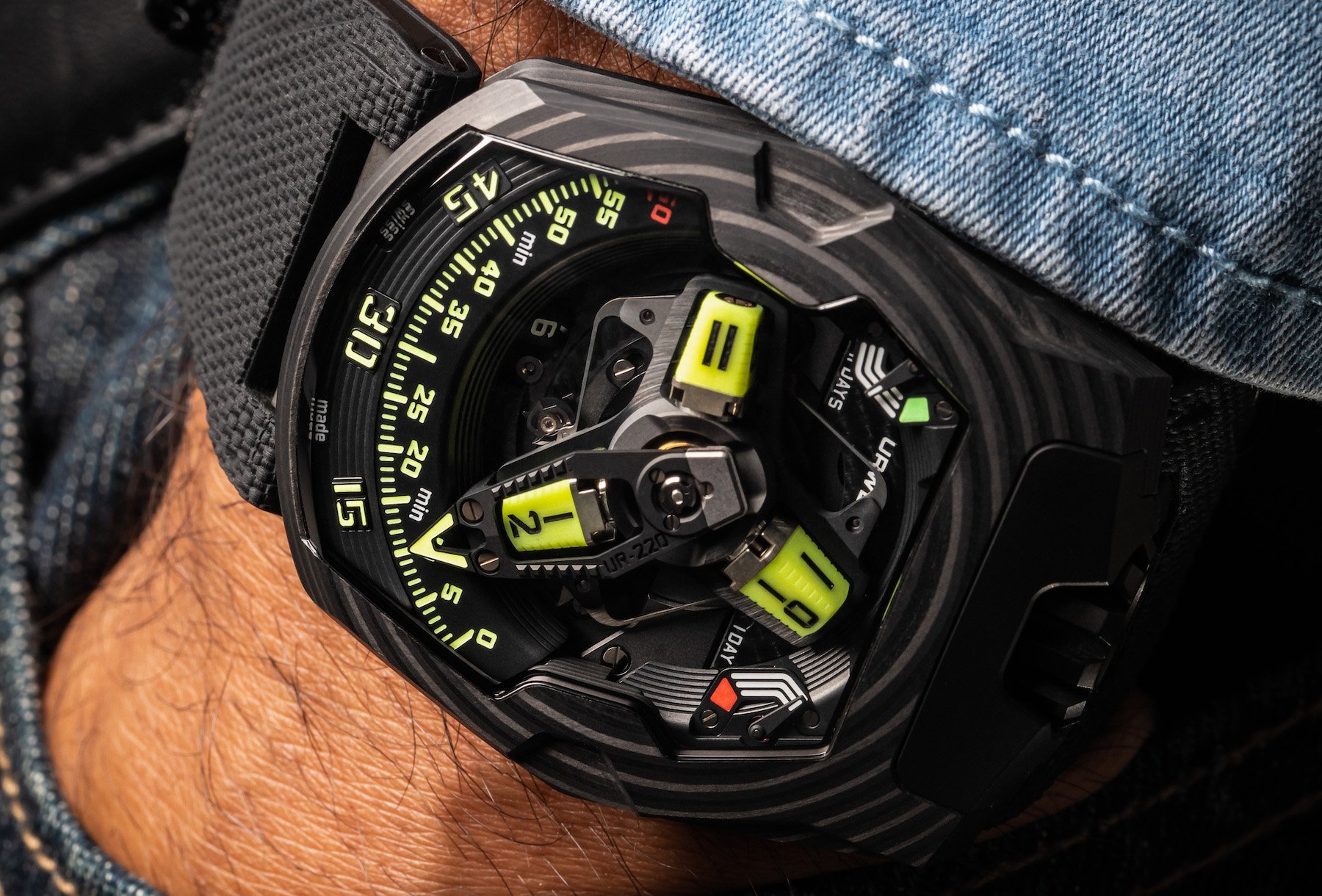 The images are a dead giveaway to the UR-220 SL Asimov’s unique character. The UR-220 SL Asimov indicates the time on pyramid-shaped hour “blocks”, hewn from solid Super-LumiNova. OK, “hewn” may be a slight exaggeration. In reality, they are cast from a silicon mould and finished by hand to ensure perfection. The degree of hardness provided to the blocks at the end of the process is close to that of ceramic. These little things are solid! 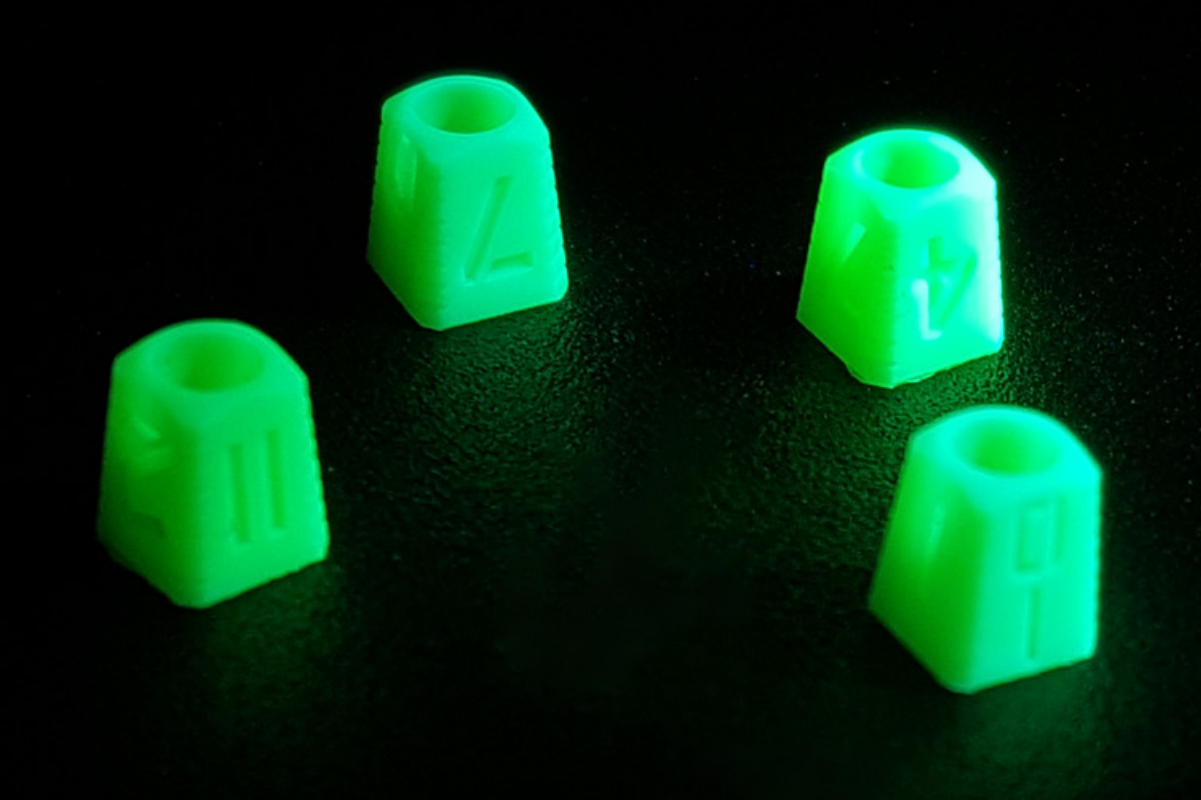 On previous versions of the UR-220, the blocks were CNC machined, and then the numerals were infilled with luminous compound. I think the new solid Super-Luminova satellite hour blocks look incredible. Despite the rest of the UR-220 SL “Asimov” receiving more subtle design tweaks, the glowing hour blocks look fantastic. 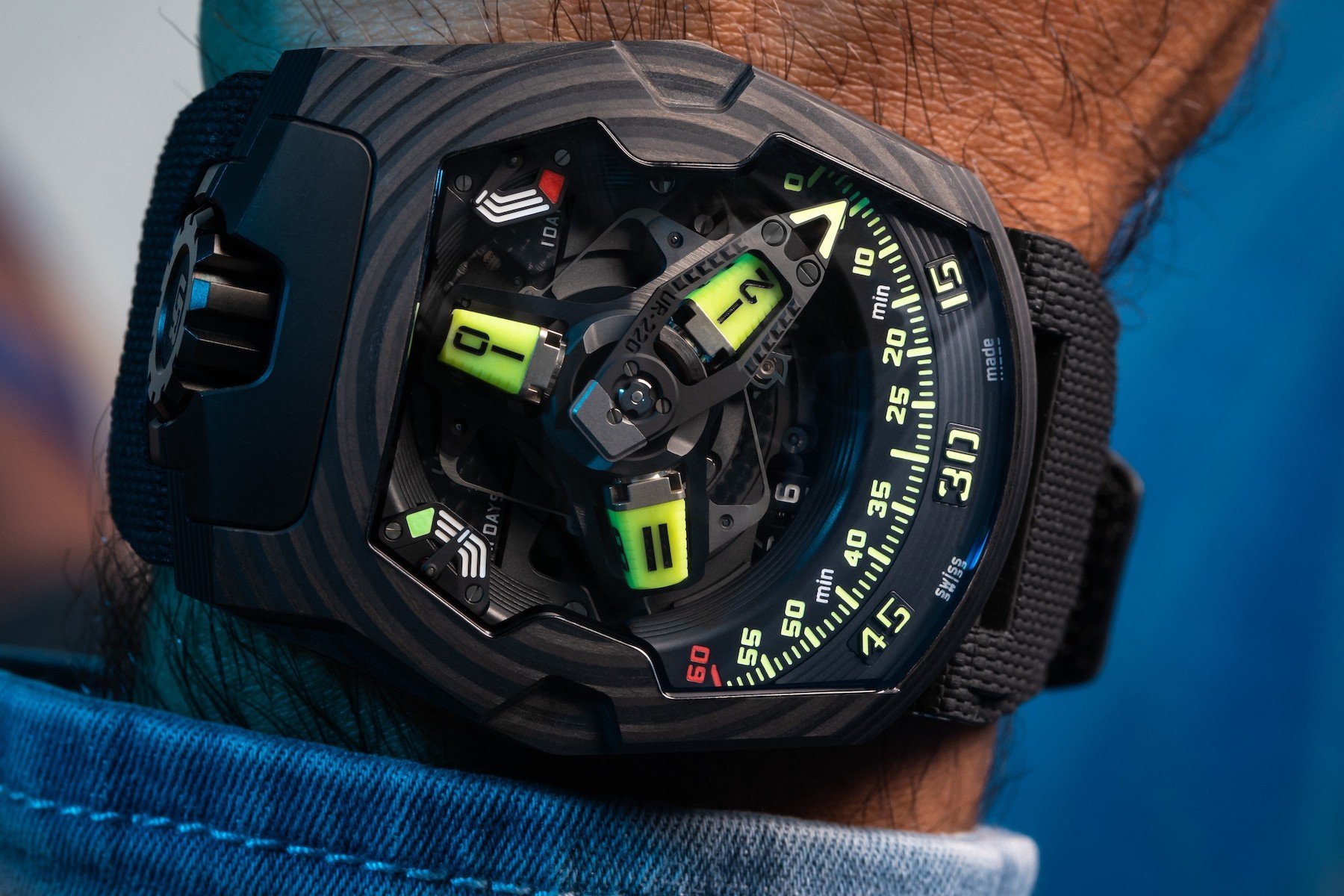 Analog or digital? The UR-220 gives you both!

One of the things I love about all of URWERK’s creations is the futuristic method of time display. It’s a combination of both analog and digital indicators. In the case of the UR-220 SL “Asimov”, the hours are displayed on the three rotating pyramid-shaped Super-LumiNova blacks. Each block is connected to a 3D minutes indicator which travels over the 120 degrees of the minute scale. When it reaches the end of the scale and the hour is complete, the indicator makes a big jump back to the “0” marker to welcome the next hour block. This retrograde minutes display is one of the most impressive I’ve ever seen. While the concept of a retrograde minutes display is not anything new, the execution here is flawless, and the operation is an absolute joy to watch. 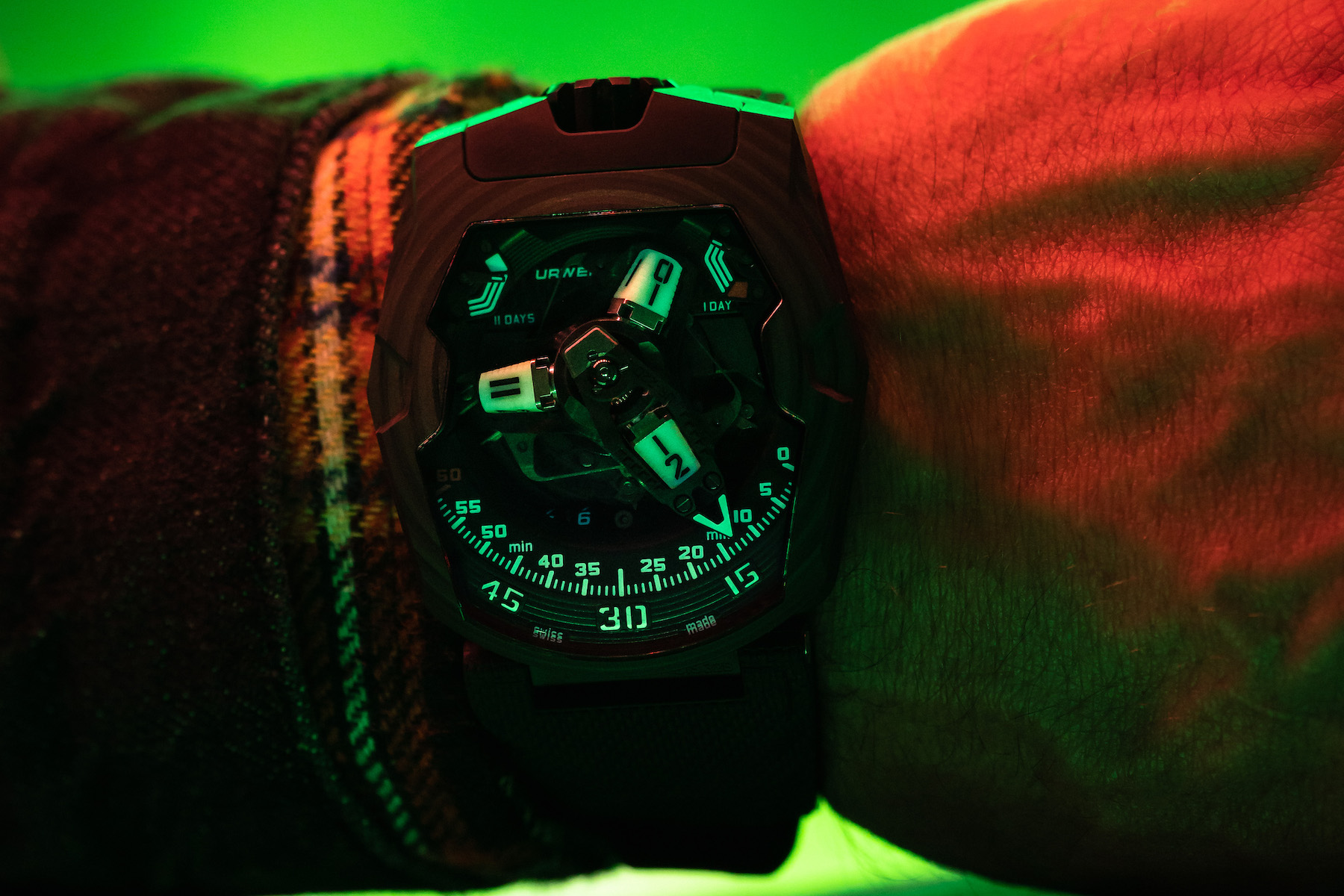 The UR-220 watches also introduced the “split” power reserve. You can see two gauges at the top corners of the dial, each representing 24 hours of power. During winding, the right-hand gauge is the first to fill up. Once it has reached the maximum level, the left-hand indicator takes over. Split between the two gauges, the power-reserve display is composed of 83 mechanical elements, showing quite how intricate the construction of this split power reserve really is. In operation, it’s quite an elegant solution to more accurately allow the wearer to know how much power remains. 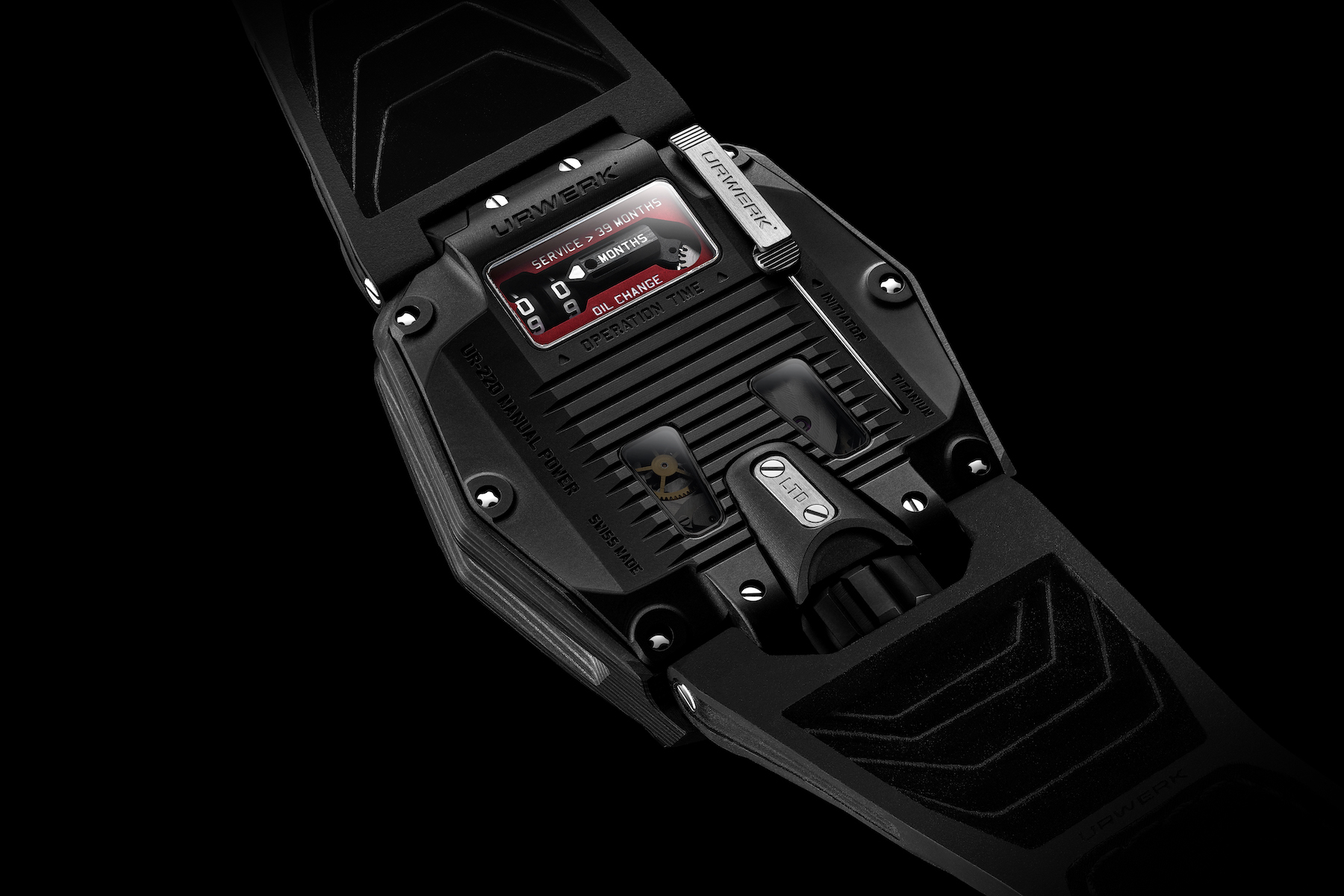 If you flip the watch over,  the familiar sight of the “Oil Change” service indicator will greet you. While the dial-side of the watch has some aesthetic differences (but thankfully keeps the exceptionally cool CTP carbon case!) over its UR-220 siblings, the movement remains unchanged. If you want to read more about the “Oil Change” indicator and the movement, take a look at my previous hands-on review of the UR-220 C81 Falcon Project. I also explain a little more about the CTP carbon material too. It’s worth a read! 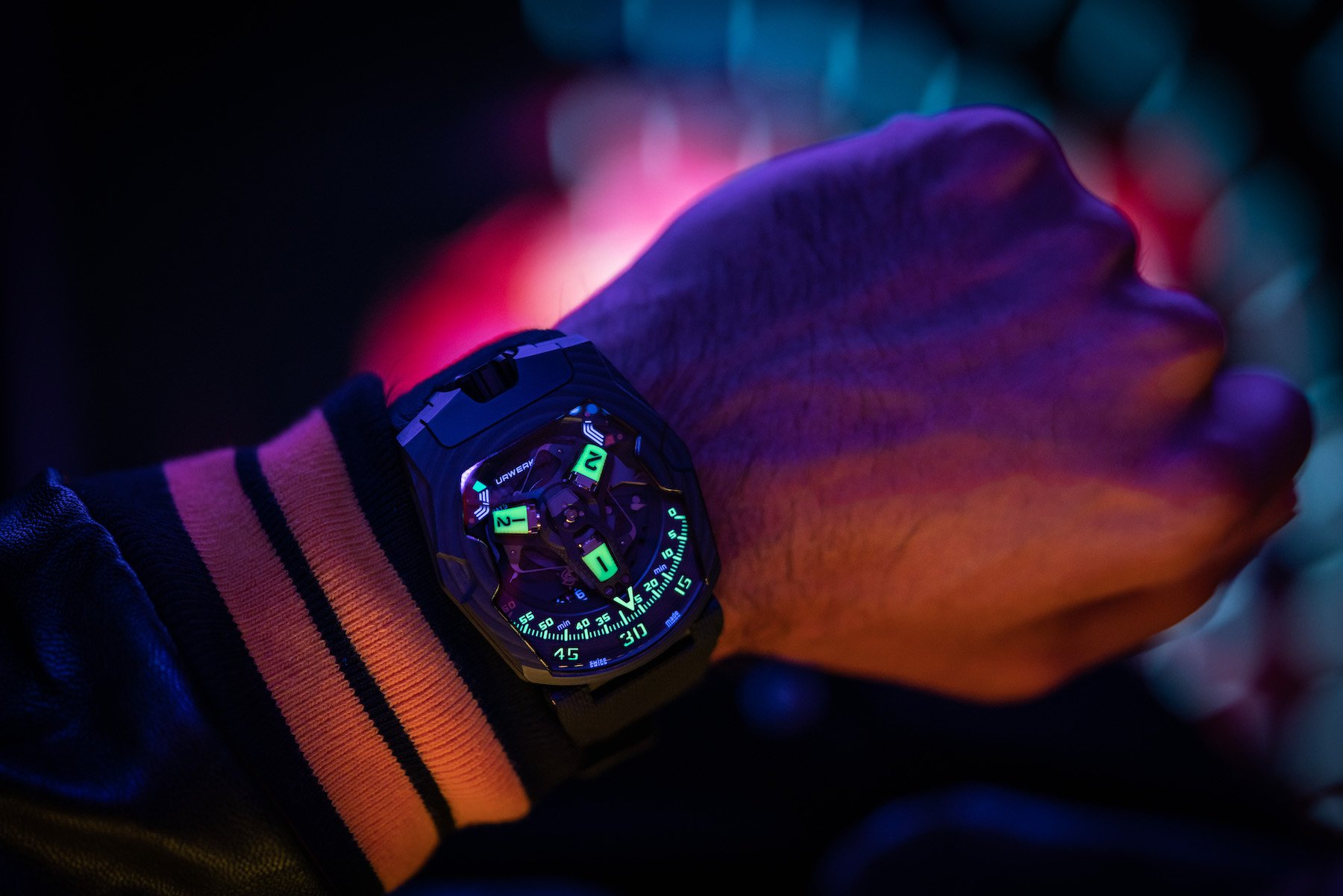 So there we have the new UR-220 SL “Asmimov” from URWERK. A watch with a unique personality that nicely fits into the UR-220 family. I’m excited to see the character of the UR-220 continue to evolve. I love seeing how Martin Frei is able to translate his inspirations into new personalities for the brand’s watches. The UR-220 is one of only 2 active model lines in the brand’s UR-Satellite catalog right now (the other being the UR-100), so you can expect to see more in the future!

For more information about URWERK, you can visit the brand’s official website here. Read more about the UR-220 here.