I have covered the Omega Speedmaster Professional Apollo XI Moonshine more than once here. That includes a long-term review on the watch after exactly a year of ownership. But never before I did an article on the bracelet alone. Here we are though: Meet the Nixon bracelet review.

The bracelet of the Speedmaster Professional Apollo XI Moonshine deserves its own article. It is that good, in my opinion. And, to be frank, I didn’t expect it to be this good. The specifications didn’t lie about the small clasp (14mm)  and got me a bit worried at first.

But boy was I worried for nothing. I mean, it is not everyday one spends the amount of a nice car on one watch. It was even the first time I discussed a purchase with my wife. Normally, she doesn’t care, but this time it was so much money (for me), I thought I should discuss it with her first. The Speedmaster Moonshine watch itself is great. I mean, what is not to like? It has the new caliber 3861 Master Chronometer movement. It has a little piece of lunar meteorite in the case back. The hour markers are beautifully cut onyx pieces. And then there’s the gold. A lot of gold. But not in a gaudy way in my opinion. The Moonshine alloy is a bit paler than normal yellow gold and suits me perfectly (more here). 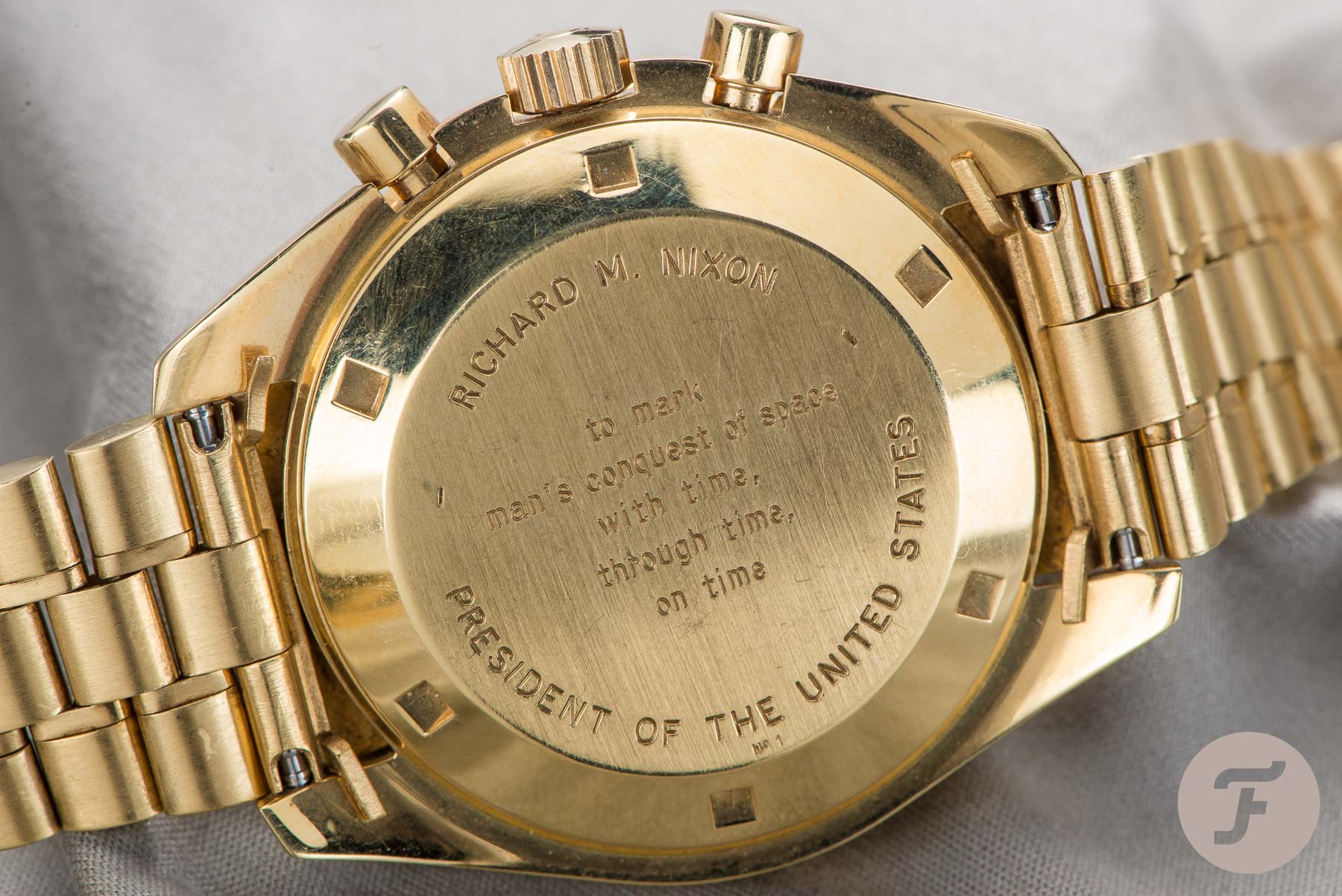 Why is this bracelet now known as the Nixon? Well, the original Speedmaster Professional in yellow gold, the reference BA145.022-69 (BA indicates yellow gold), was offered to President Nixon in 1969. He had to refuse due to the high value of this Speedmaster. Consequently, it ended up in the Omega Museum in Biel. The gold Speedmaster Professional BA145.022-69 was one of the first special Speedmaster variations I saw when I just started collecting watches in the 1990s. My then-watchmaker had one, in perfect condition. The bracelet was similar to the one of the Speedmaster Moonshine, but with hollow links. The clasp of the original gold bracelet was only 14mm wide, which always struck me as small. 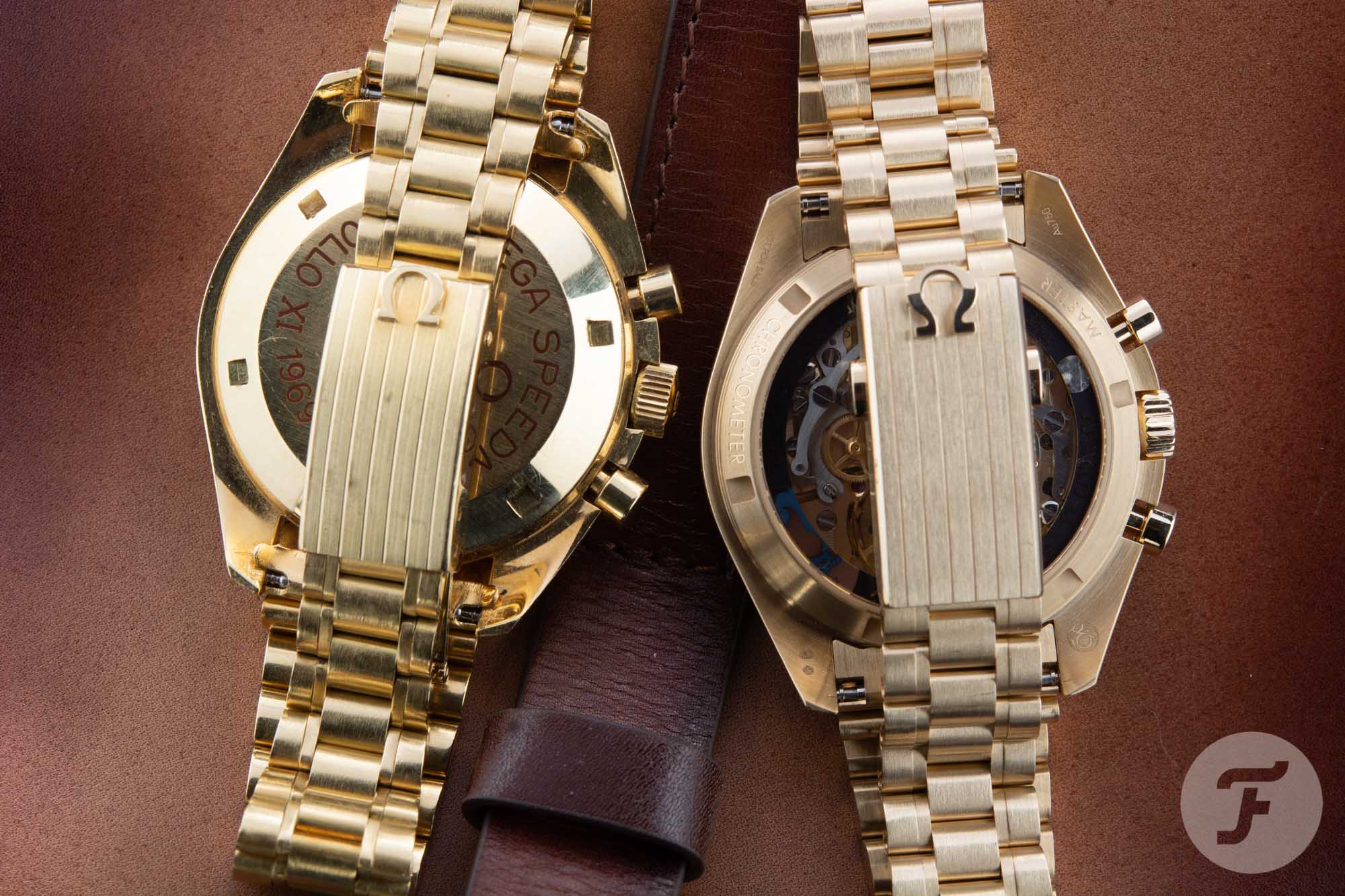 When I was shown the Speedmaster Apollo XI Moonshine in 2019, I was surprised to see that Omega kept the original width of the clasp. It was no deal-breaker for me, obviously, but I was wondering how I  would feel about it when wearing the watch. The Nixon bracelet on the Moonshine is a solid and heavy bracelet. Heavy because of the use of gold, but it has a lot of substance anyway, despite the small width of the clasp. The big pushers weren’t on the original Nixon bracelet, but those increase the width to 16.5mm. Due to the rectangular shape, they sure do add a bit of body to the clasp. 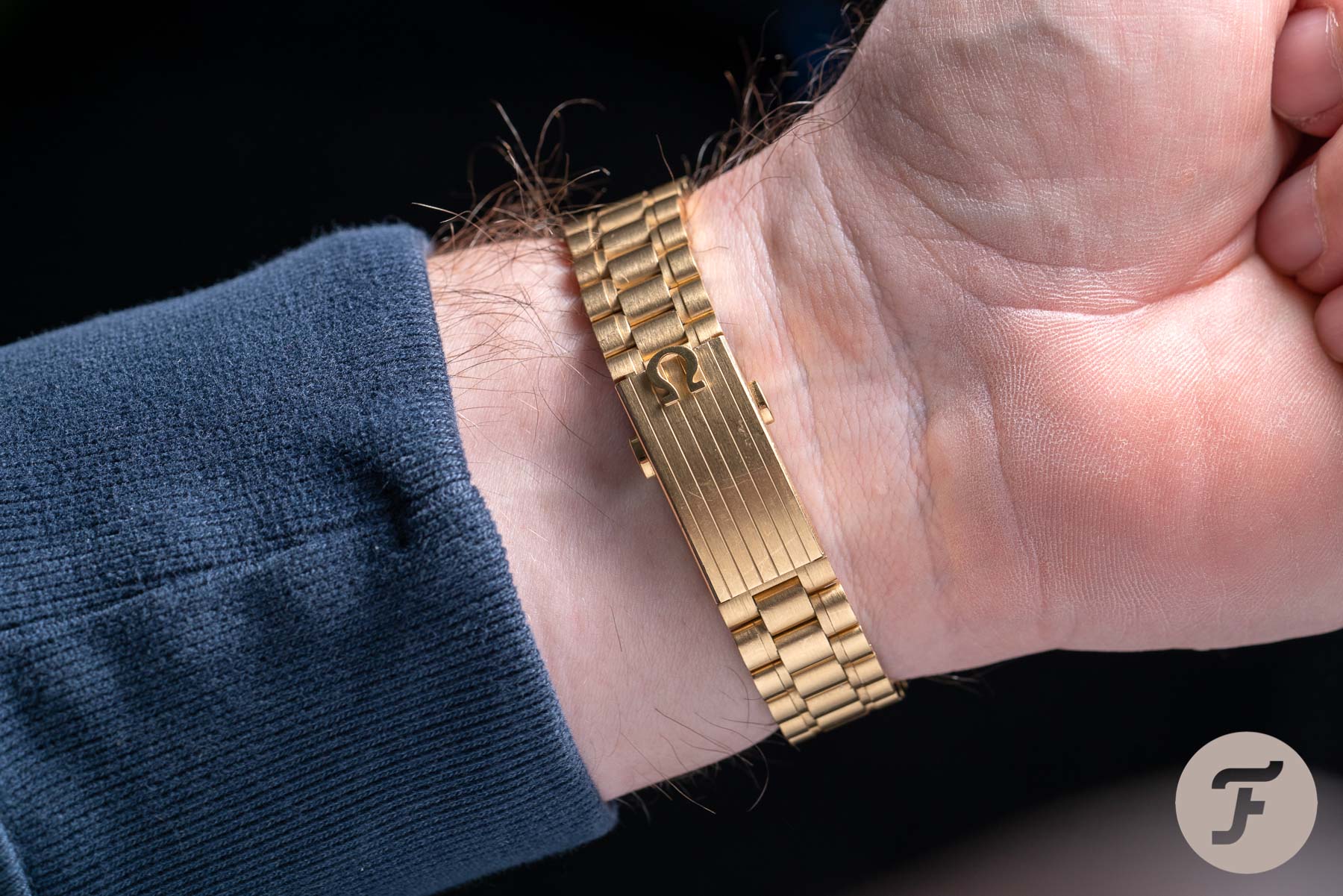 A Speedmaster deserves a proper bracelet

I have always been honest about my feelings towards the steel bracelet on the current Speedmaster Professional. It is a comfortable bracelet, but I don’t like the style. This type of bracelet has also been made in gold, but it didn’t really improve things (for me). 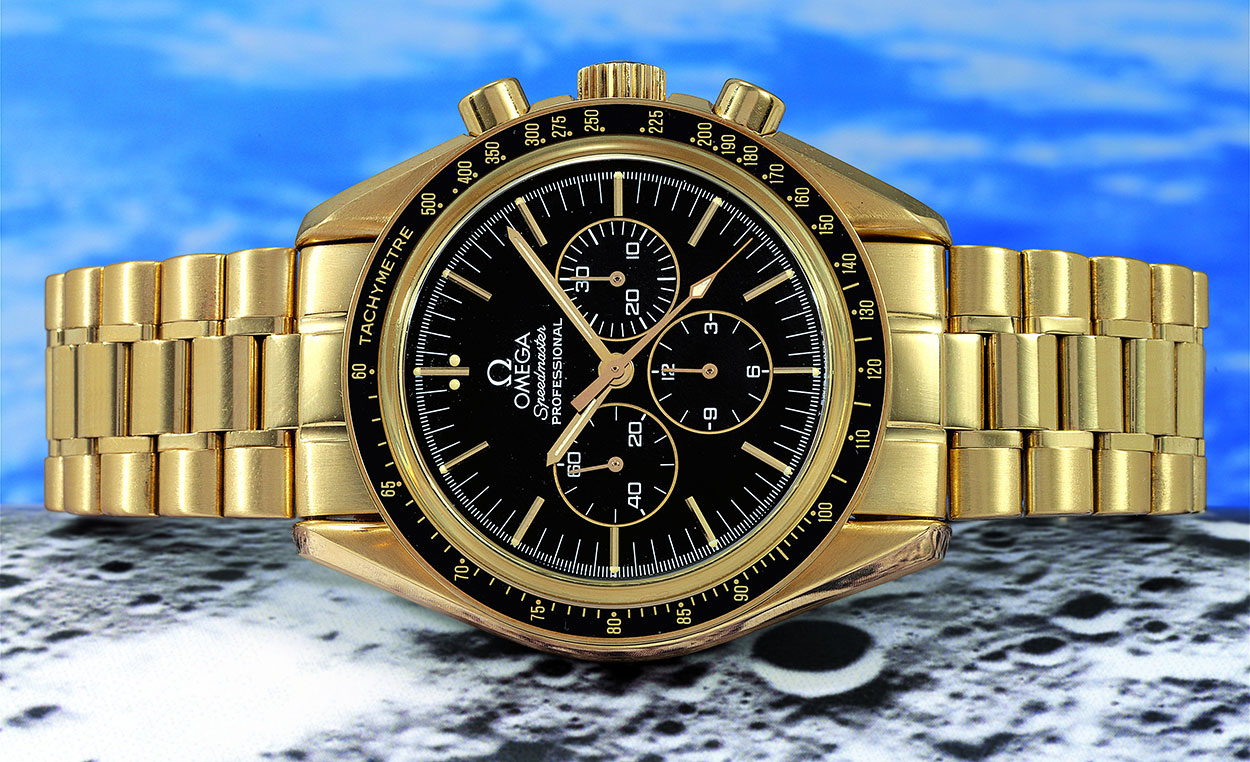 The steel bracelet that is currently used for the Moonwatch has been around since 1996. That said, the past 20 years have seen several small updates to this bracelet. Push buttons on the clasp, the use of screws instead of pins, an easy adjustment system in the clasp, and so on. But the general design of the bracelet has been used for over two decades now. The two small polished links on each side of the center link is a bit too much, in my opinion, and the bracelet doesn’t taper. At all. It is 20mm between the lugs and 20mm at the clasp. 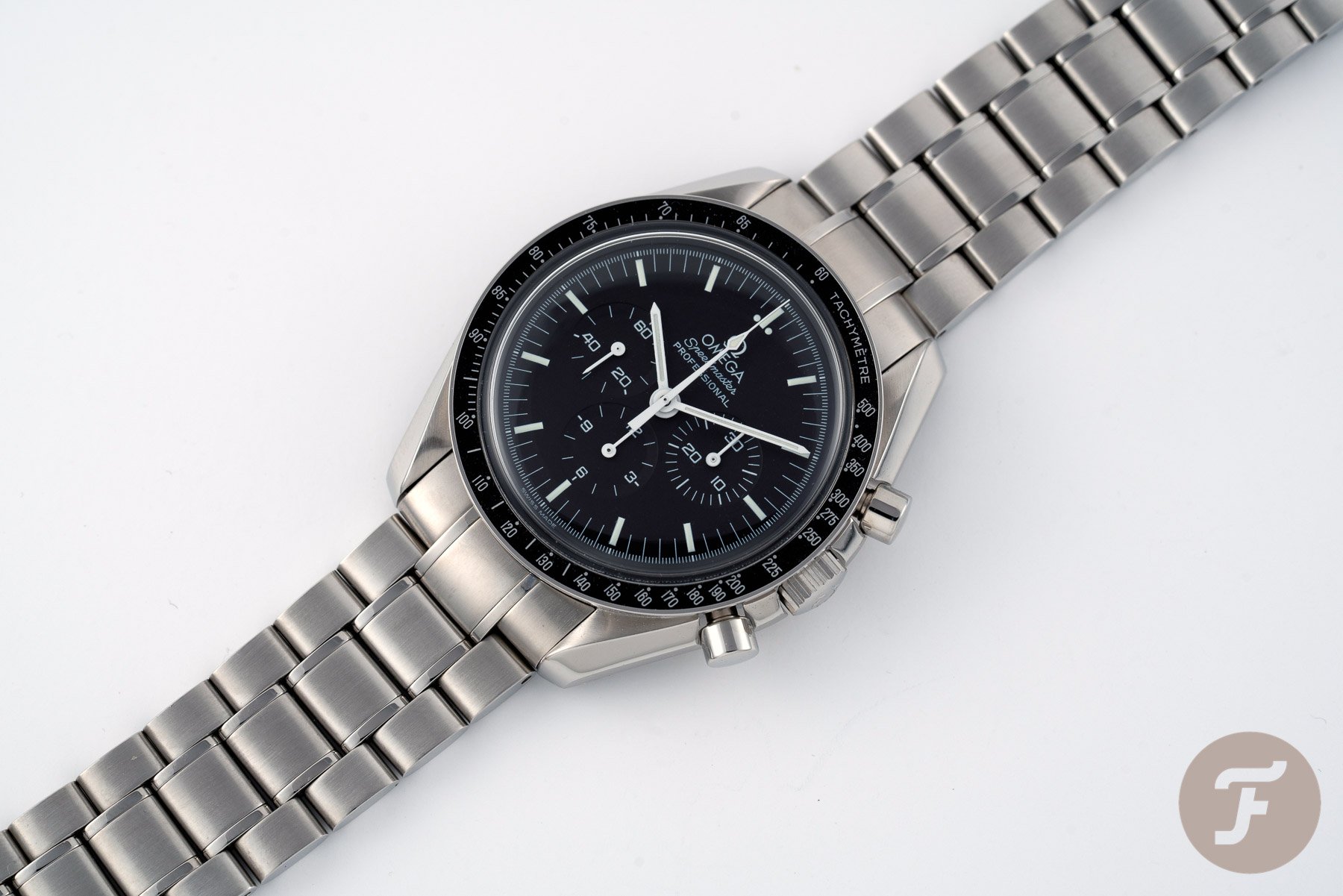 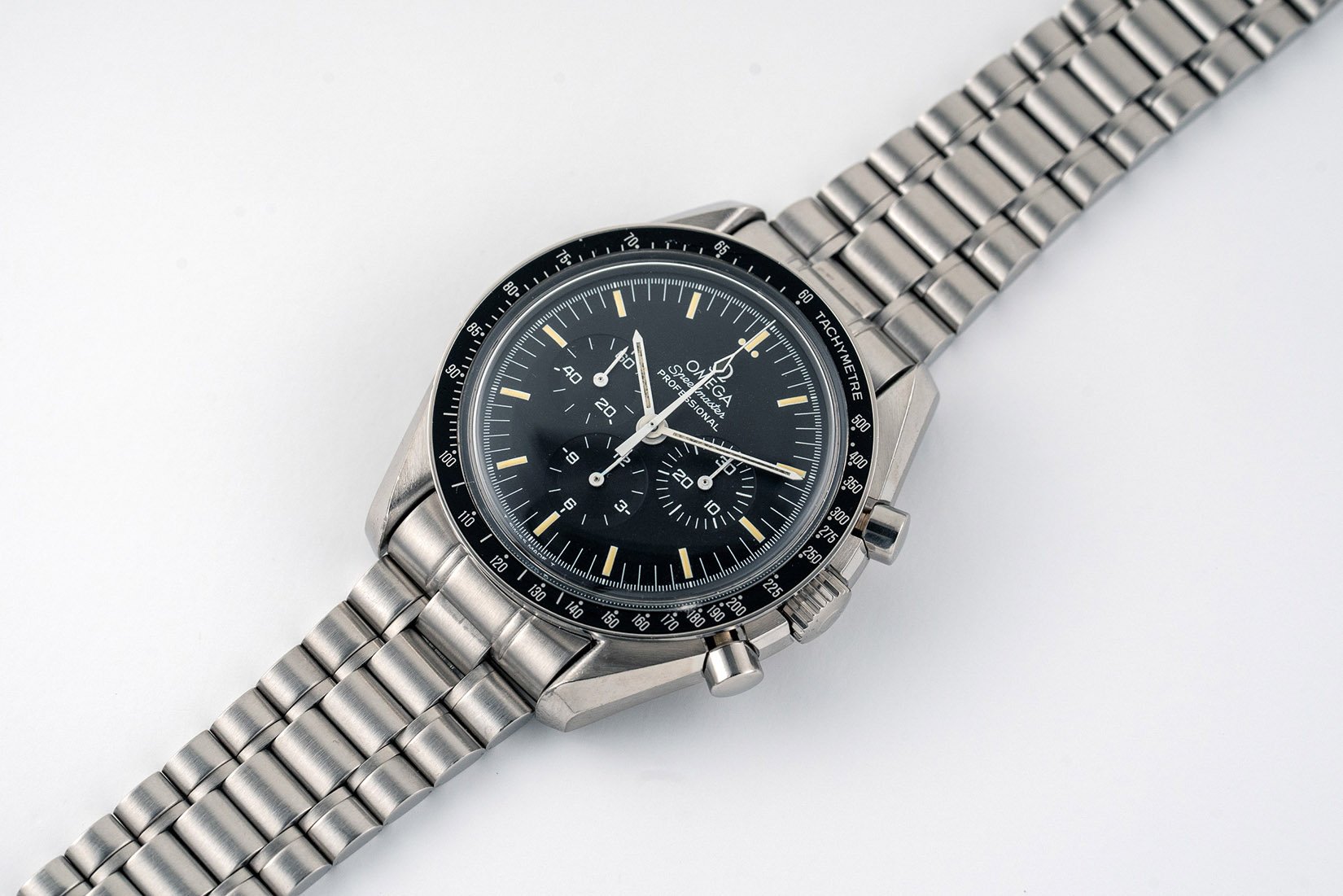 The gold bracelet used on the Apollo XI model from 1980 appears to be similar to the first Nixon bracelet on the BA145.022-69, but the links are wider and the bracelet doesn’t taper as much. The clasp on the gold Speedmaster Apollo XI from 1980 (reference 345.0802) is also very different, as you can see below. 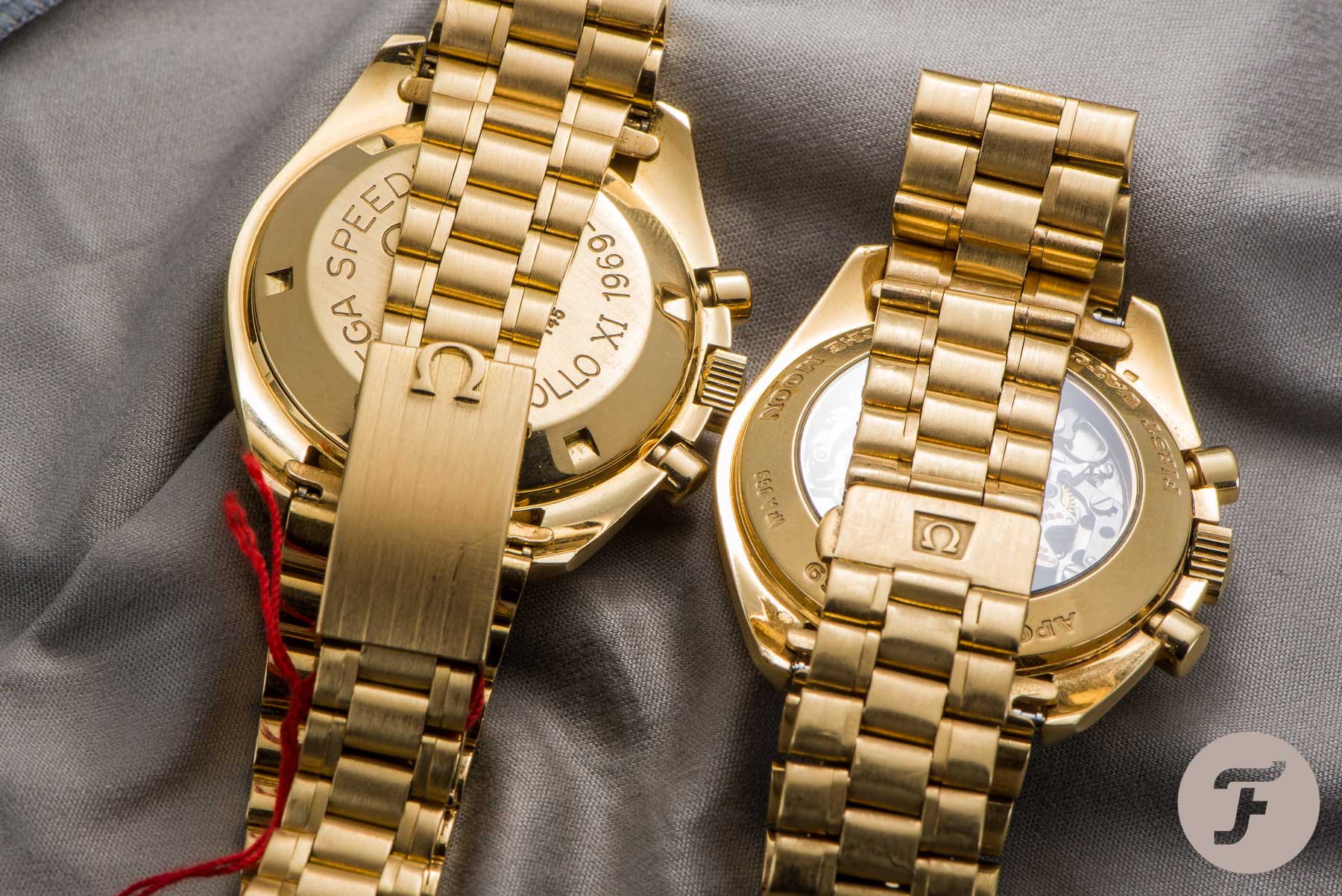 When Omega introduced the Speedmaster’57 in 2017, for the 60th anniversary of the Speedmaster, it also came on an interesting bracelet. It looked like the original reference 7077 bracelet from the Speedmaster CK2915 but modernized. Unfortunately, that means it has a bit thicker links and a big clasp. 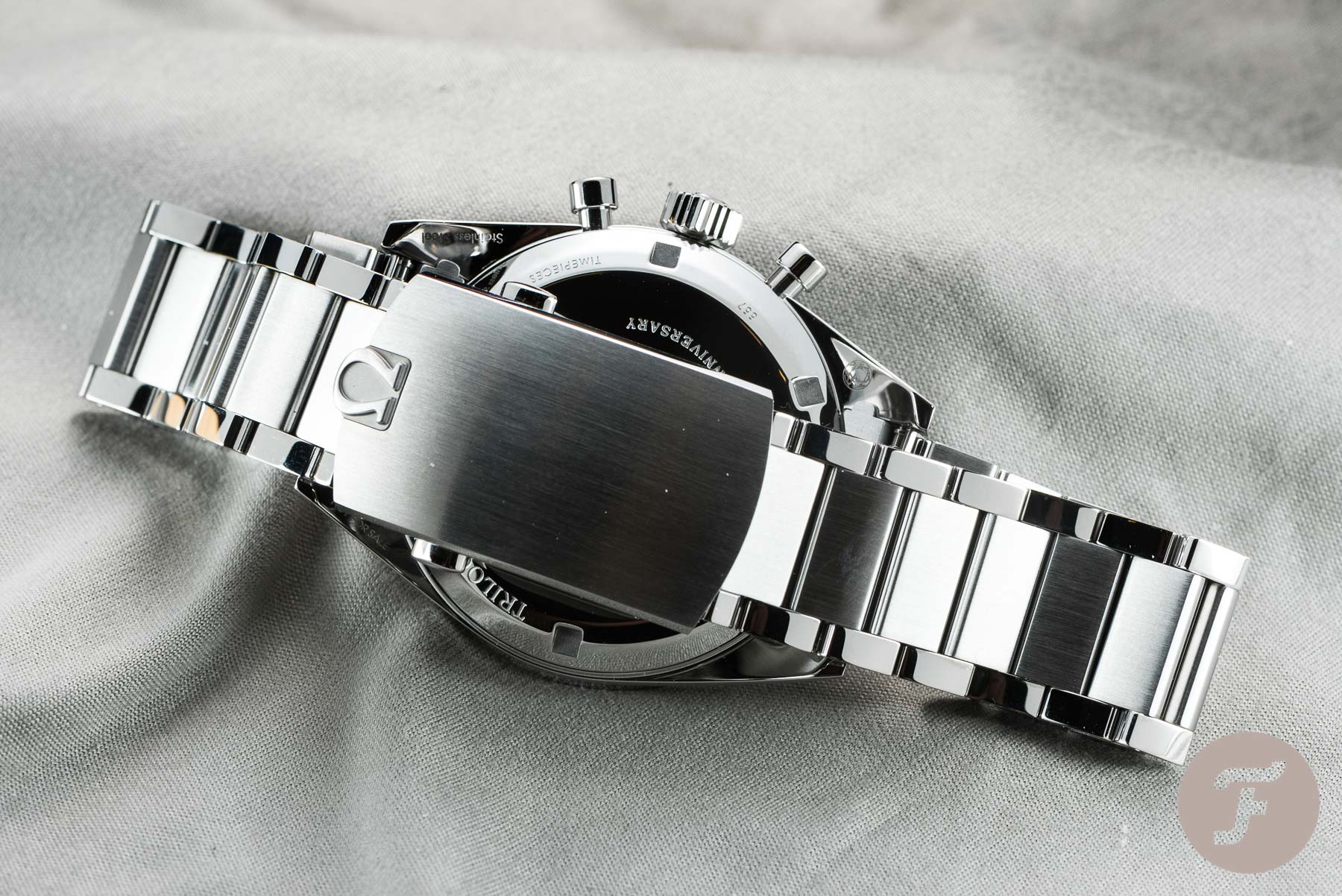 In 2019, Omega also introduced the Speedmaster Professional Apollo XI in steel for the 50th anniversary of the Moonlanding. That watch came with a very nice bracelet, based on the original reference 1039. This year, Omega introduced the new Speedmaster Calibre 321 “Ed White”, that comes with a similar bracelet to the steel Apollo XI 50th, but with smaller endpieces and a slightly different clasp. It is another amazing bracelet that I really enjoy wearing. 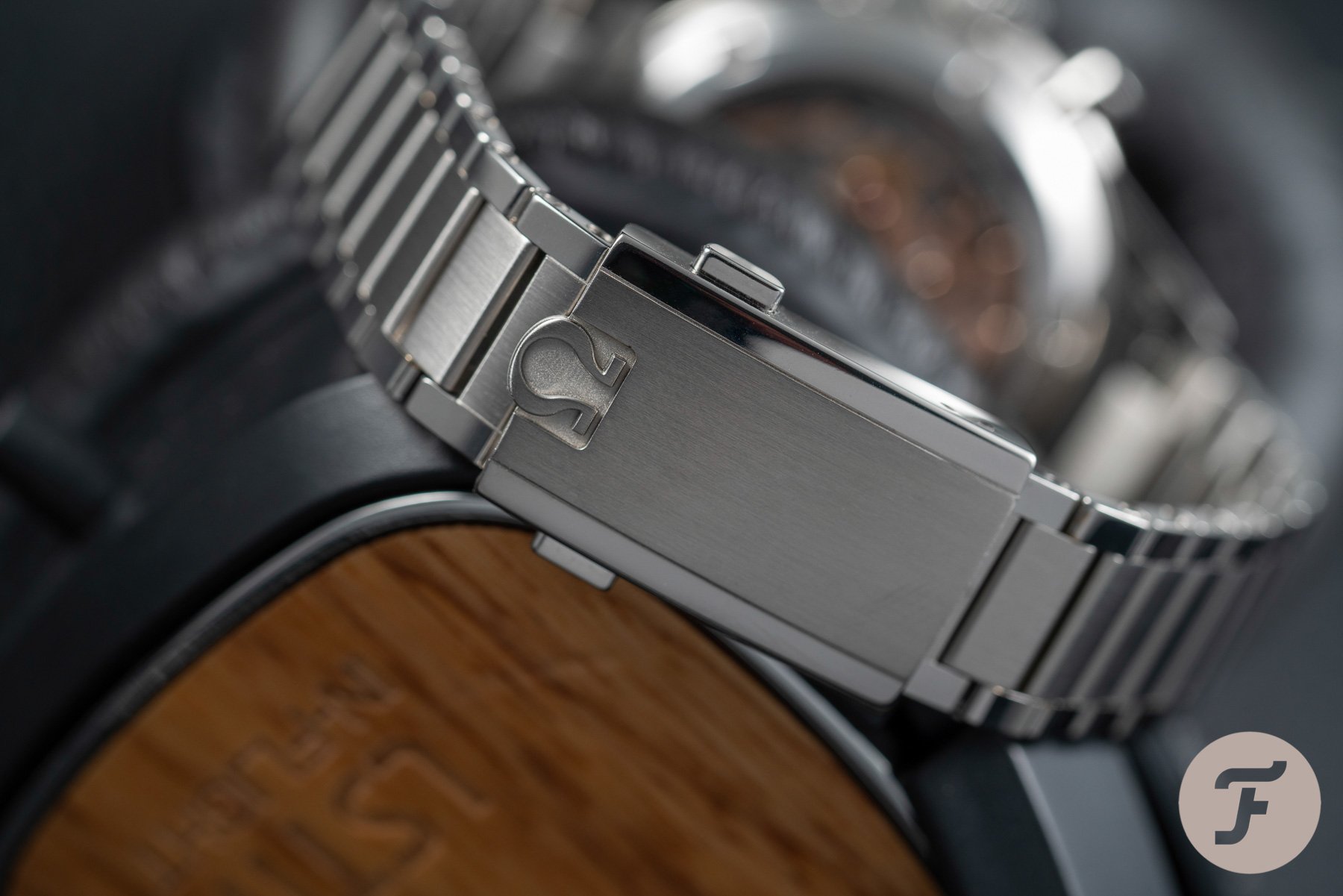 Of all of the steel bracelets above, my personal picks are those the Speedmaster “Ed White” and the Apollo XI in steel. I also love the looks of the reference 1479, but just like the predecessors of that one (1171(/1) and the hailed 1450) from the 1980s, it doesn’t meet today’s quality requirements from Omega. And having all of those bracelets in my collection, I can attest. 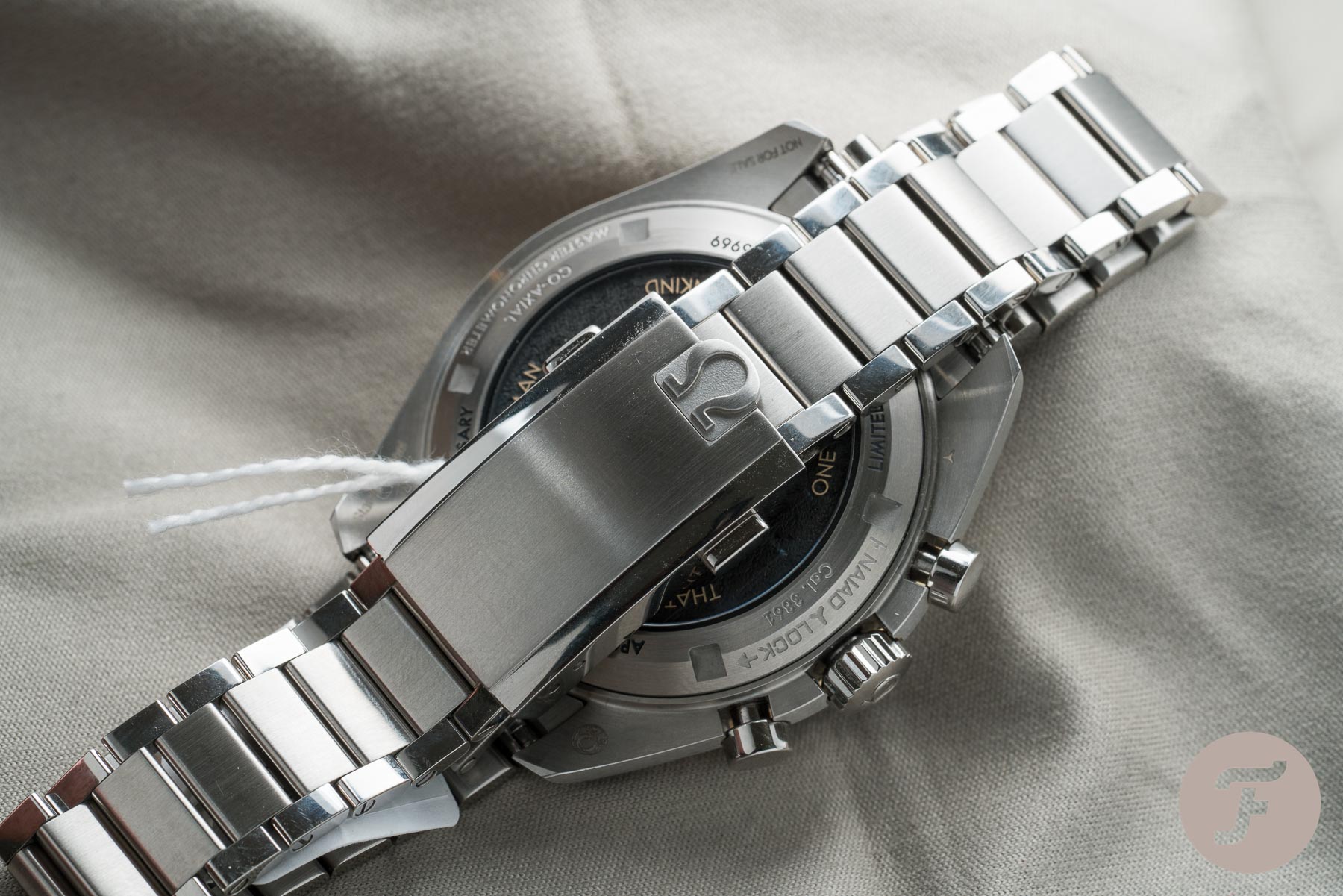 However, the Speedmaster Nixon bracelet is still the one I love the most. The tapering is very nicely done. Not only did I get used to it, but I also started to fall in love with it. Even though I have fairly large wrists, I am starting to prefer somewhat more modest sized watches and bracelets. For dive watches, I am happy to make an exception. However, when it comes to a classic looking chronograph, I think a little bit of elegance never hurt anyone. 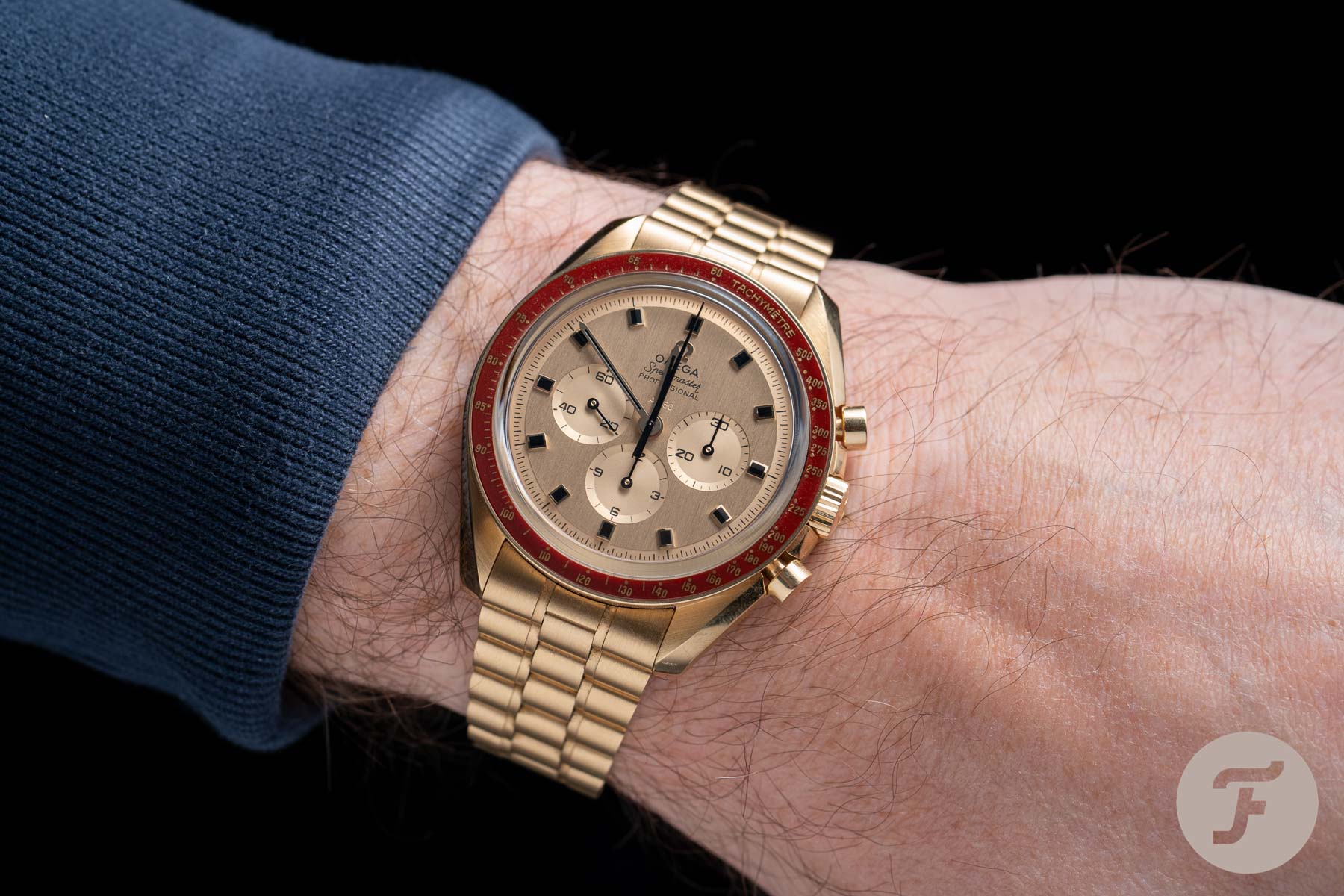 I think the clasp with its nice decoration looks stunning too. Some people complain it doesn’t have a step-less adjustment, but with the holes in the clasp, you can actually adjust it to 1/3rd, 2/3rd, and if you need more, you can add or remove a full link. I think the steps of 1/3rd of a link are small enough. 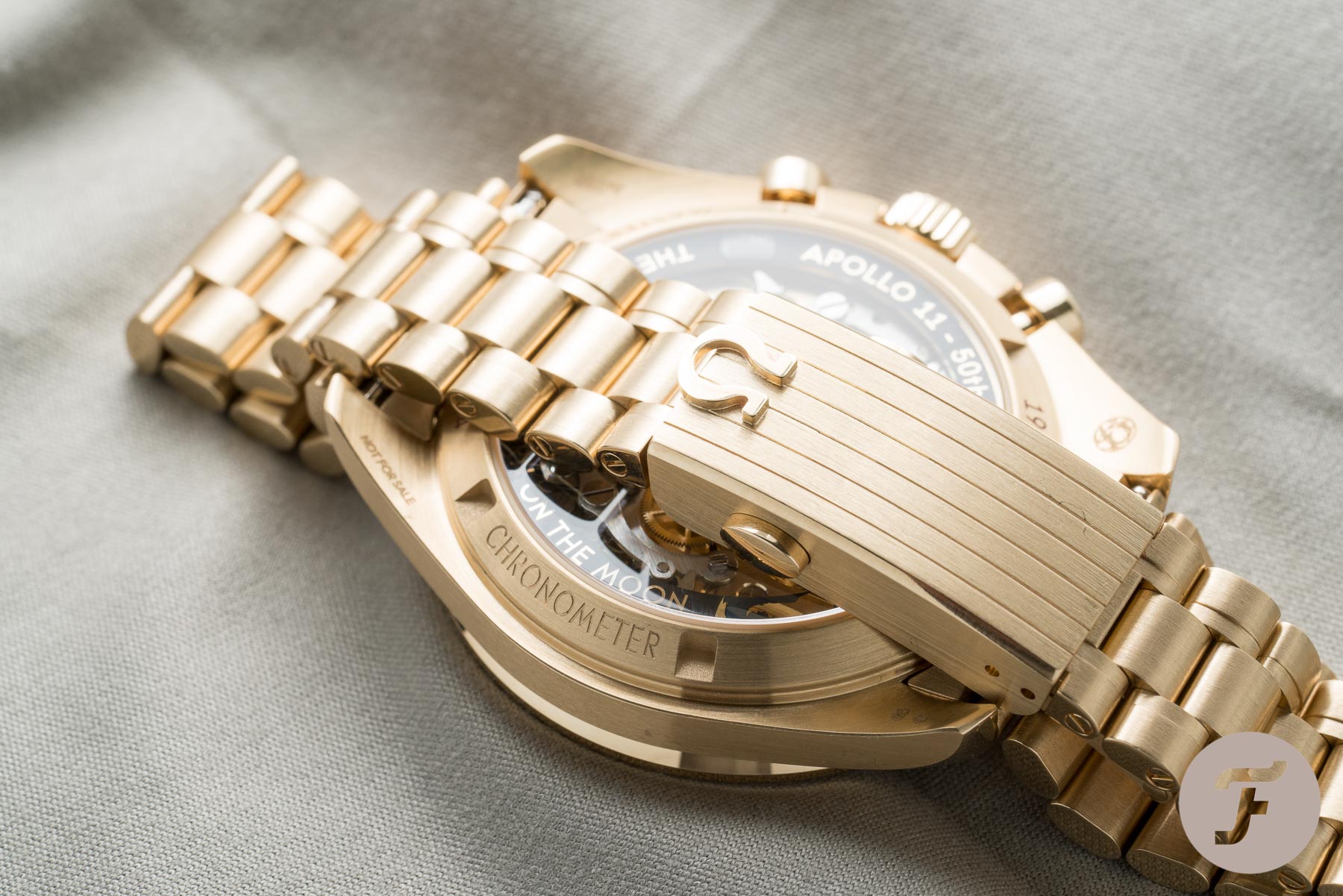 What the future holds…

A gold (Speedmaster) watch is not for everyone as it isn’t exactly an accessible watch. When my appreciation for the Nixon bracelet started to develop, I also started to hope for a steel version. As you know, the current steel Speedmaster Professional Moonwatch with caliber 1861 is about to be phased out and replaced by an updated version. As soon as we get official press information on the new Speedmaster, we will be (among) the first the write about it. 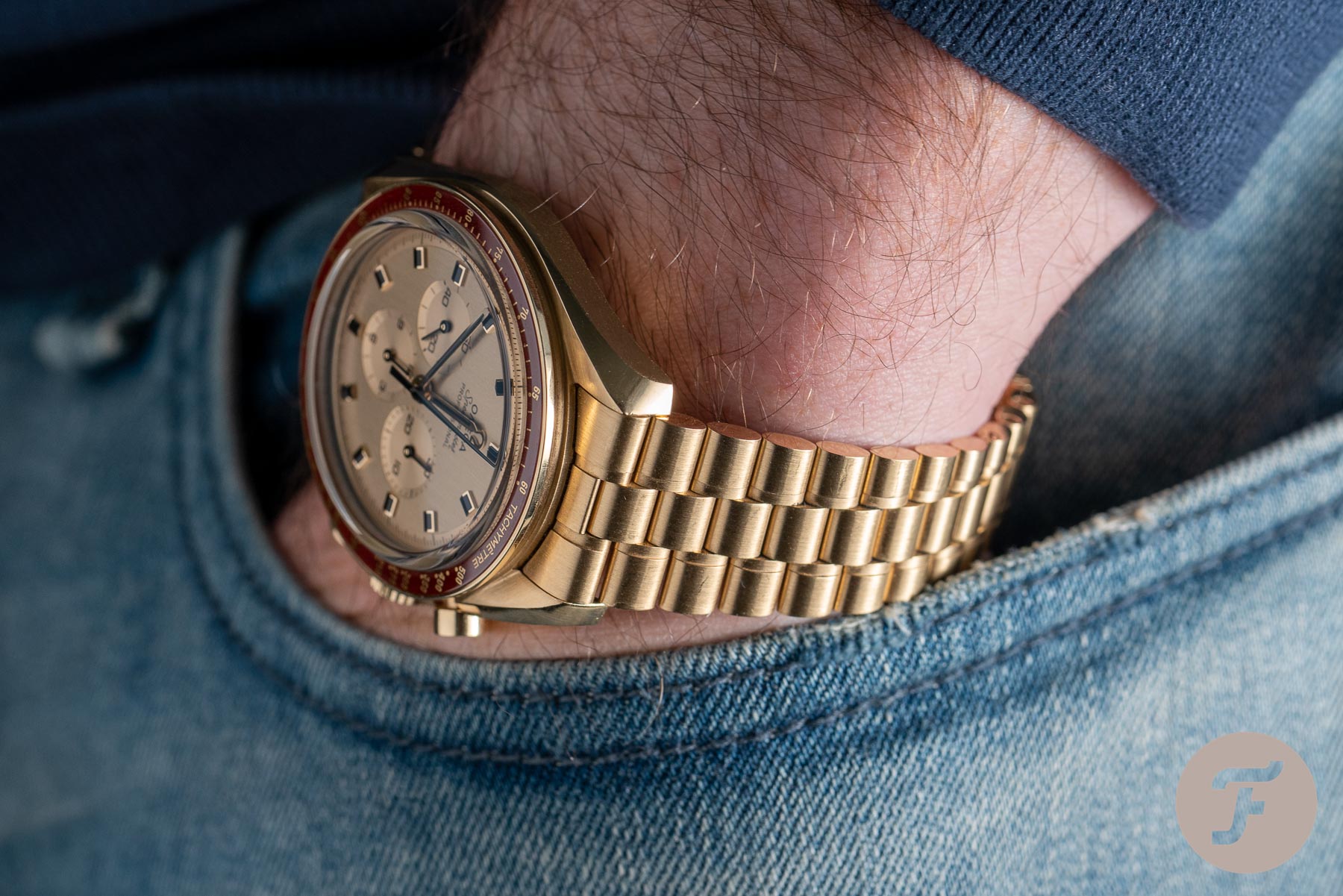 In the past one-and-a-half-years, the Moonshine has become my favorite and most worn Speedmaster, and the bracelet plays a huge role in that. The small round and thick links really feel comfortable on the skin, and the finishing looks great as well. While the bracelet has these oval-shaped links on the outside, you will find them having a few sharper angles on the inside. 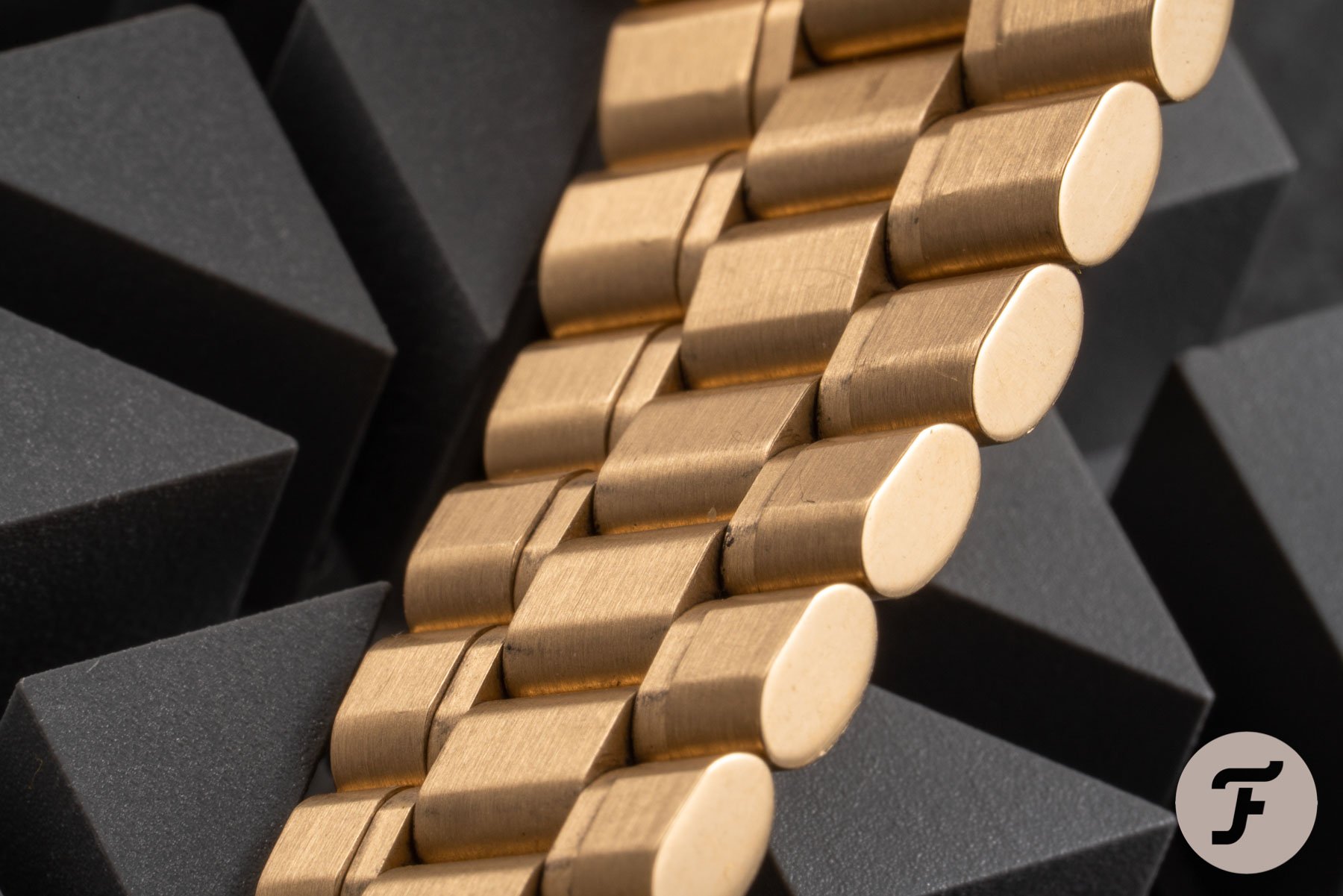 I am not sure if this is done to enhance the wearing comfort, but since it doesn’t pull any hairs, it might be done for this reason. This bracelet design fits the Omega Speedmaster Professional much better than the standard Speedmaster bracelet in my opinion. More information about Omega here. Other Speedmaster articles can be found here.