Looking at the past through rose-tinted glasses...
Rob Nudds
comments ...
Share

The world of auction houses can seem a distant, intimidating, and elite environment simply because of the sales that grab the headlines. Few of us can imagine ponying up the kinds of prices that recent blue-chip watches have commanded when they went under the hammer. But that isn’t to say auction houses are only for the rich and the famous! In fact, luxury watch auctions — whether attended in person or digitally — can be great opportunities to obtain some fine pieces at a good value. At the very least, they can be an opportunity to learn about a particular cross-section of this industry to which we dedicate so much time.

Today, we’re shining a light on Ineichen Auctioneers based in Zürich, Switzerland. Founded in 1973 by Peter A. Ineichen, the prestigious house found its name on the map just two short years later. It was then that its experts were entrusted with the collection of the Hellmut Kienzle watch museum, amassed by the eponymous Schwenningen watch manufacturer and collector between 1961 and 1975. 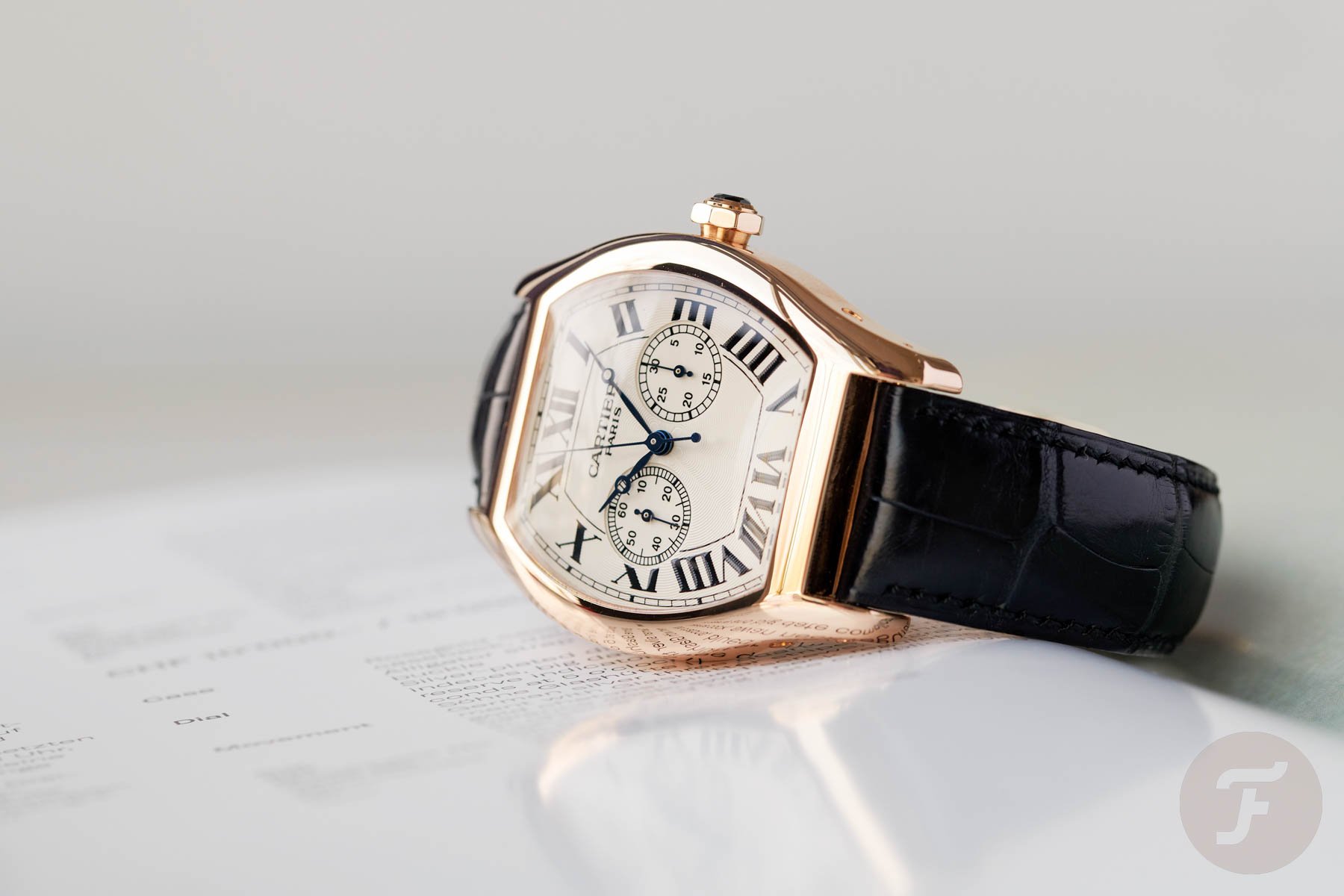 To any watch lover who has spent significant time in Germany, the name Kienzle will likely be familiar. Founded in 1822 by Johannes Schlenker, the Kienzle brand would grow to become one of Germany’s most prolific. Ten years after the first Kienzle (Jakob) would join the company as the brother-in-law of the founder’s grandfather in 1883, the company was producing some 162,000 clocks and alarm clocks and was firmly established in the area. This success would continue for many more decades and largely be to thank for Hellmut’s world-renowned assembly of watches, pocket watches, and clocks. 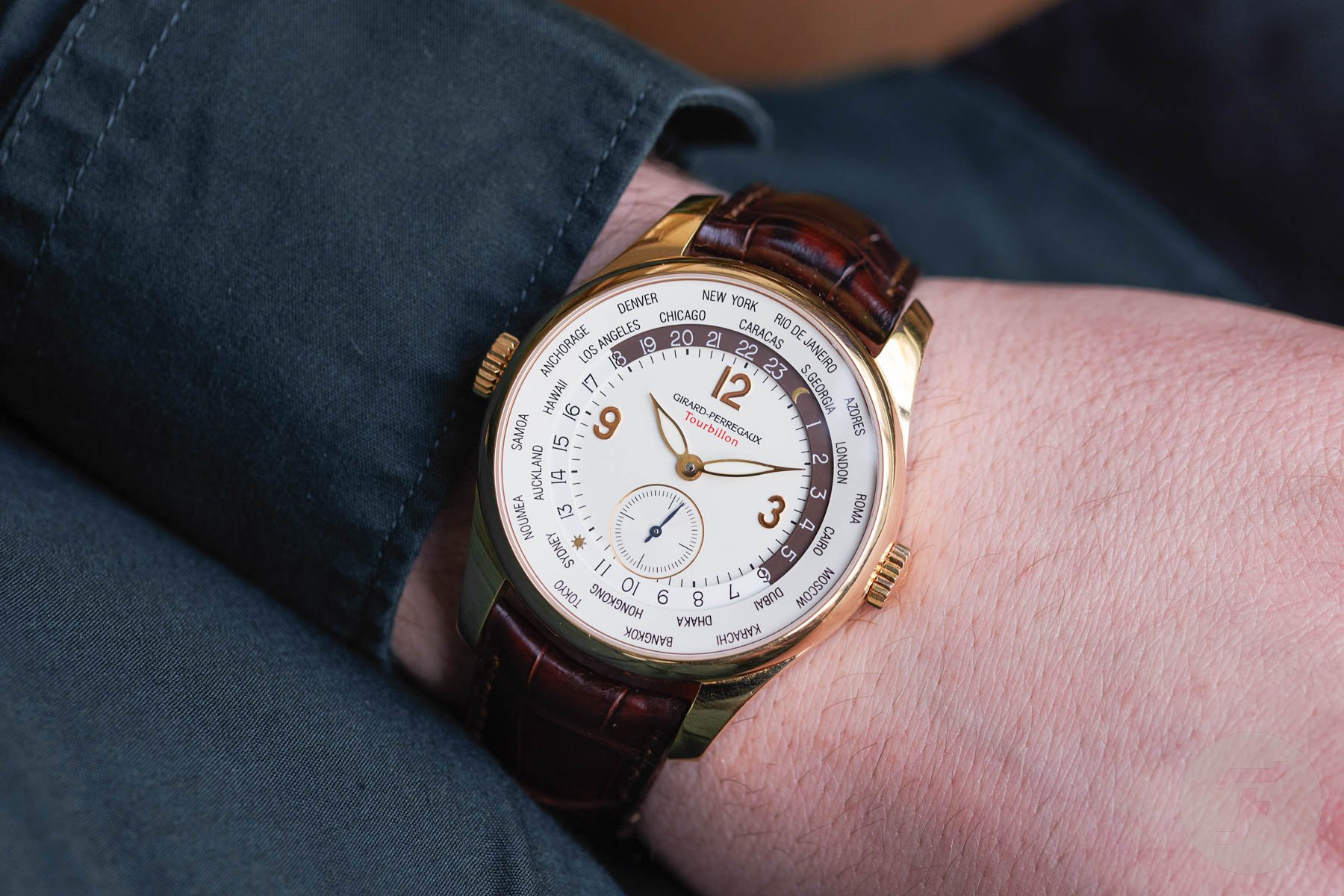 A new direction for a new era

That kind of opportunity doesn’t fall to just any auction house. Ineichen established itself as a bold business partner right out of the gate. That visionary attitude was on display again when, in 2017, the company changed hands and strategy, and committed to aligning with modern auction trends. In 2020, with a new IT infrastructure in place, Ineichen completed its most successful auction in sales in 40 years.

In 2021, Ineichen branched out into the now widely accepted online live bidding platform. A year later, Ineichen launched its in-house live bidding platform. That same year saw the house preside over the sale of the world’s most expensive watch-related NFT token, as well as the setting of five world records at its sale of rare timepieces in November 2021. F.P. Journe wristwatches set three of those records, while timepieces by Vianney Halter claimed two. 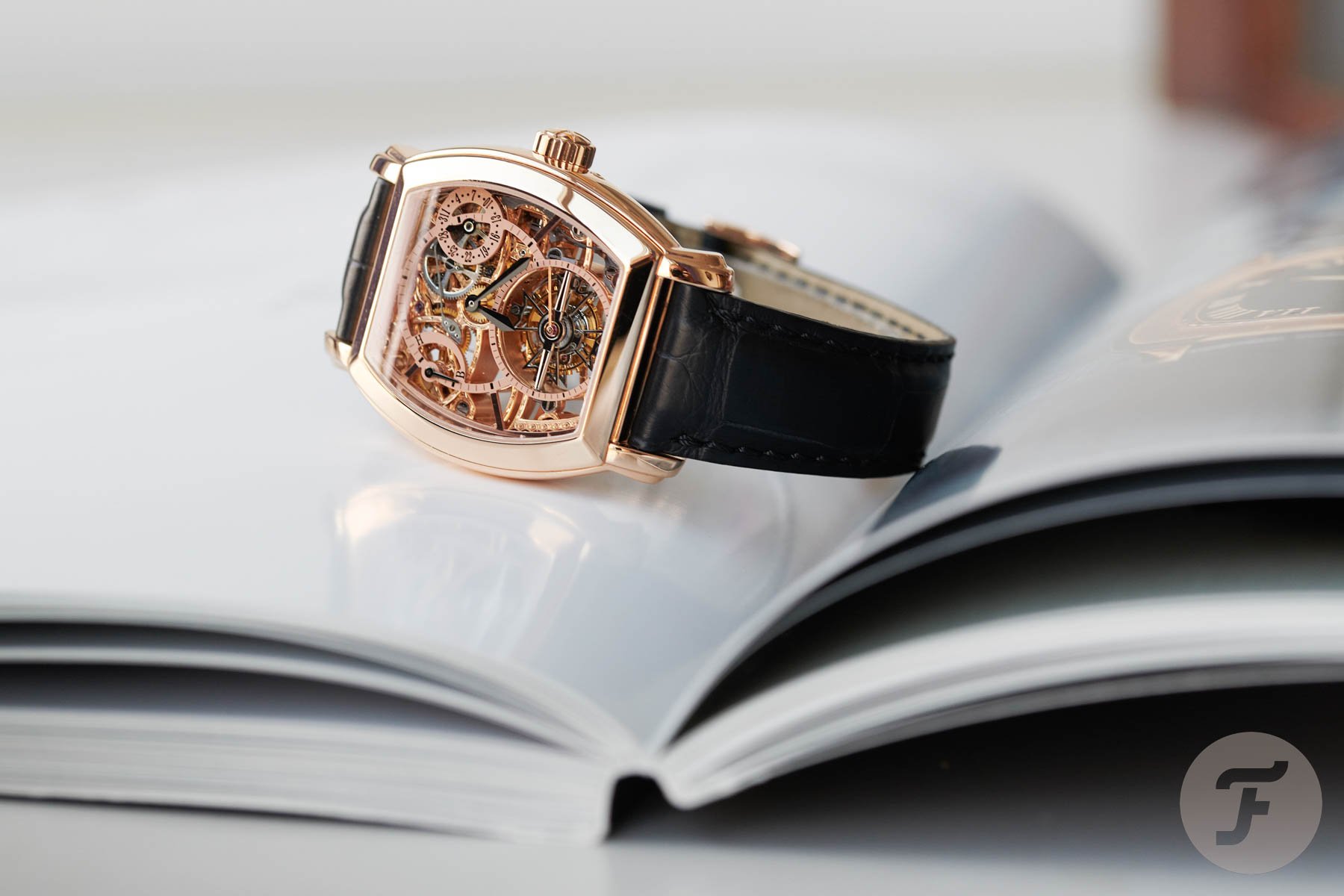 And it seems very probable that attendees will witness even more world records tumbling. Models such as the F. P. Journe Chronomètre à Résonance Sincere Limited-Edition (No. 202-RN), the F. P. Journe Octa Calendrier Sincere Limited Edition (No. 239-Q), and the Vacheron Constantin Malte Openworked Tourbillon (Ref. 30067/000R-8954) will be up for sale. Let’s take a closer look at the top five lots that will be going, going, gone come March 12th. 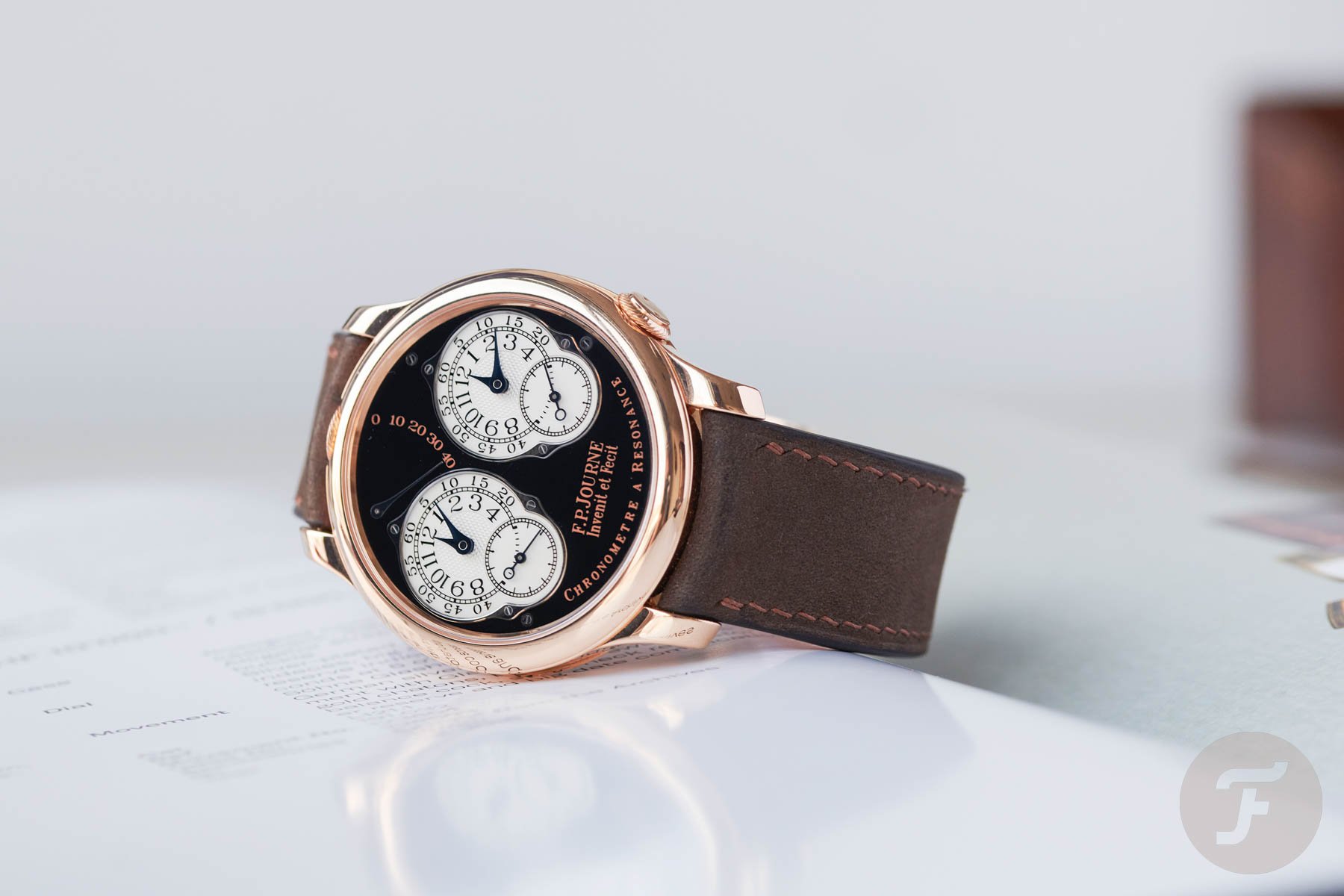 This rare, limited-edition, complicated wristwatch was first purchased in 2006. It features a 40mm × 9.1mm case in 18K rose gold, a black mother-of-pearl dial, and silver sub-dials patterned with Clous de Paris guilloché. It runs on the thin, manually wound caliber 1499.2, with mainplate and bridges in solid 18K rose gold and twin independent gear trains coupled with an aerodynamic resonance system.

Resonance is the physical phenomenon that results from the interaction between two independent systems, characterized by oscillations with close frequencies. Strong resonance enables both mechanisms to move synchronously. Caliber 1499.2 was the first to utilize the aerodynamic resonance phenomenon, and F.P. Journe is the only brand that offers serial production of wristwatches with this feature.

The caliber has a power reserve of up to 40 hours, and its indicator on the dial hearkens back to 19th-century chronometers. The pointer hand indicates the time elapsed after the complete winding of the mechanism, meaning that it points to zero when fully wound. The Chronomètre à Résonance Sincere Limited Edition is one of the rarest models in the Chronomètre à Résonance line. Only 10 pieces ever saw the light of day. 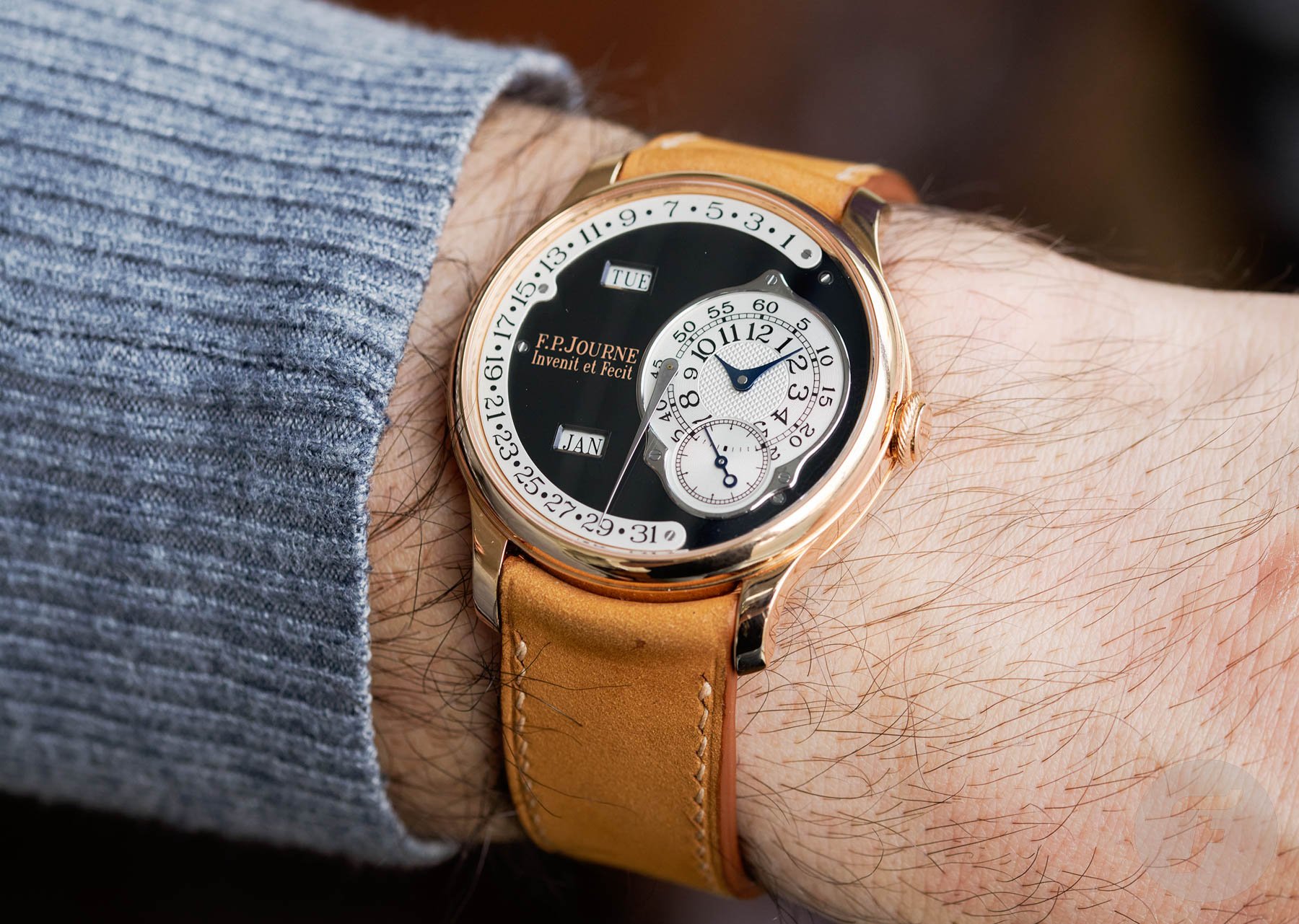 Also limited to 10 pieces, this rare model was first purchased in 2006. It has an 18K rose gold case measuring 38mm × 10.6mm, with a black mother-of-pearl dial with silver sub-dial decoration in Clous de Paris guilloché. This is one of the very few timepieces to include an annual calendar complication, automatic winding, and a five-day power reserve. Its annual calendar function indicates the date via the large central hand and advances automatically for months with 29, 30, and 31 days. In non-leap years (three years out of four) the user should advance the date manually from February 28th to 29th by turning the crown. The date then passes automatically from February 29th to March 1st. 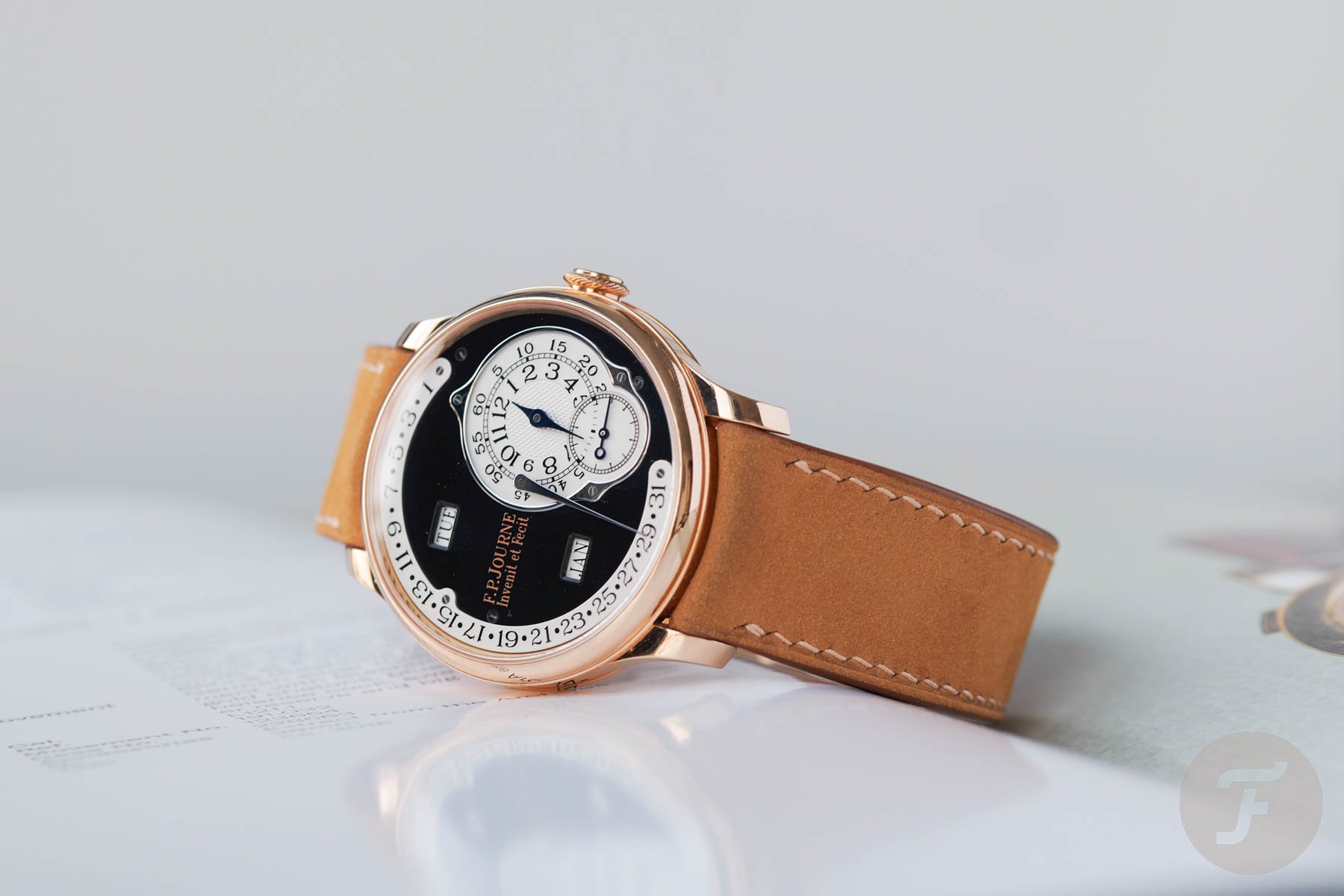 Soon after its launch, the Octa Calendrier won the Special Jury Award at the prestigious Grand Prix d’Horlogerie de Genève in 2002. Since 2004, F. P. Journe has produced its movements exclusively in solid 18K pink gold. As such, they require no protective coatings to create a flawless and non-patinated finishing of the parts. Caliber 1300.2 is decorated entirely by hand with chamfering and polishing, Côtes Circulaires on the bridges, perlage on the mainplate, and a rotor with Grain d’Orge guilloché motif. F.P. Journe ceased the production of this piece in 2015. 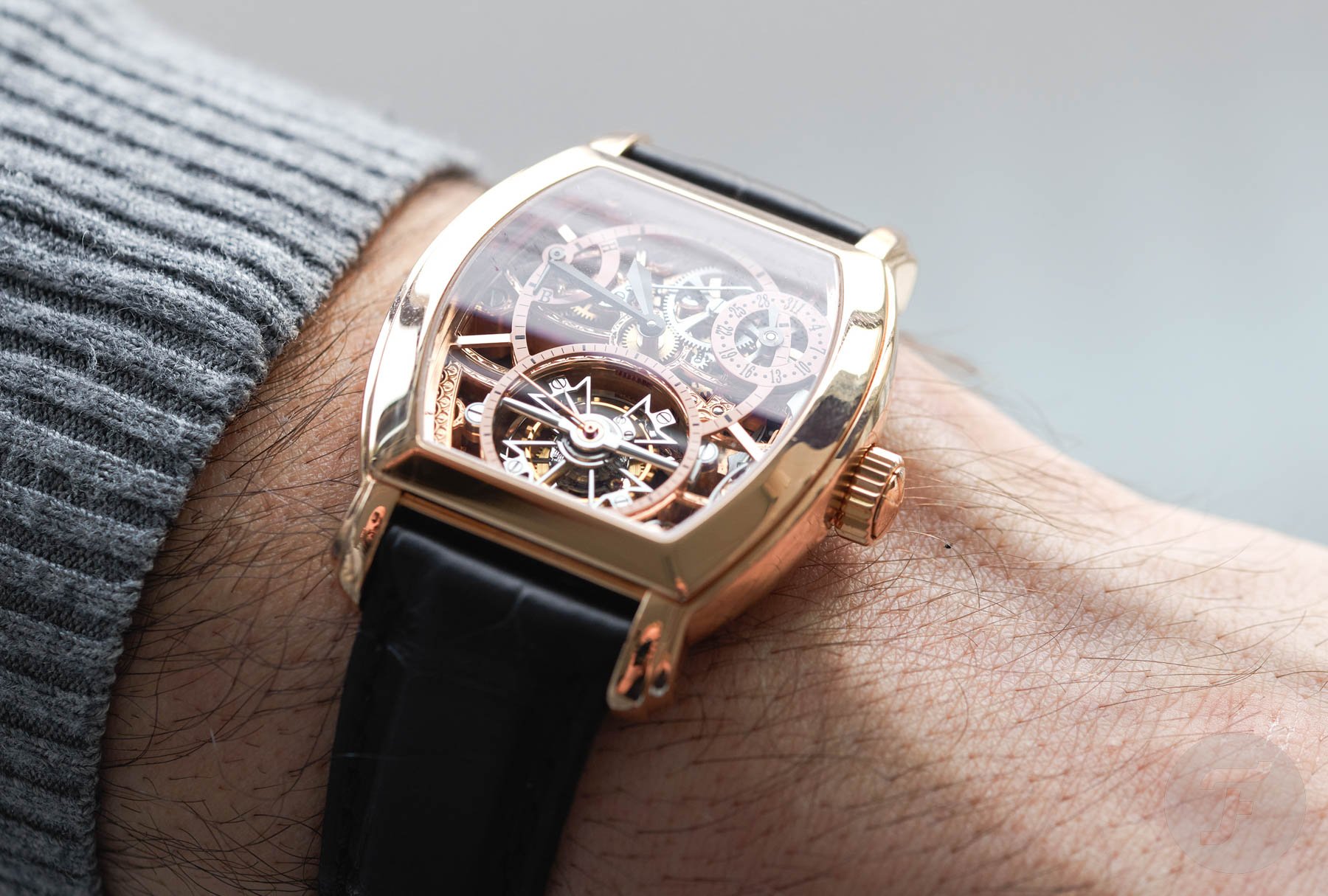 Vacheron Constantin, the world’s oldest watch brand in continuous operation since its founding in 1755, designed the Malte Openworked Tourbillon from scratch to get its tonneau-shaped movement to match the 18K rose gold case, measuring 36mm × 36mm × 11.80mm. This is a signature feature of superior mechanical wristwatches and a rarity in shaped watches. The production of this piece is estimated to be from 2000 to 2011.

Vacheron Constantin is one of the few watchmaking houses that continues the costly process of producing sophisticated mechanical watches with traditional skeletonization, baroque lines, lots of “air”, the hand-engraved “peacock tail” decorative pattern, and meticulous finishing of all components. The Malte Openworked Tourbillon Ref. 30067/000R-8954 is a compelling example of this approach. Another special feature is the caliber 1790SQ, which is one of the best traditionally skeletonized tourbillon movements with flamboyant baroque aesthetics. It’s also Vacheron Constantin’s first in-house tourbillon movement. 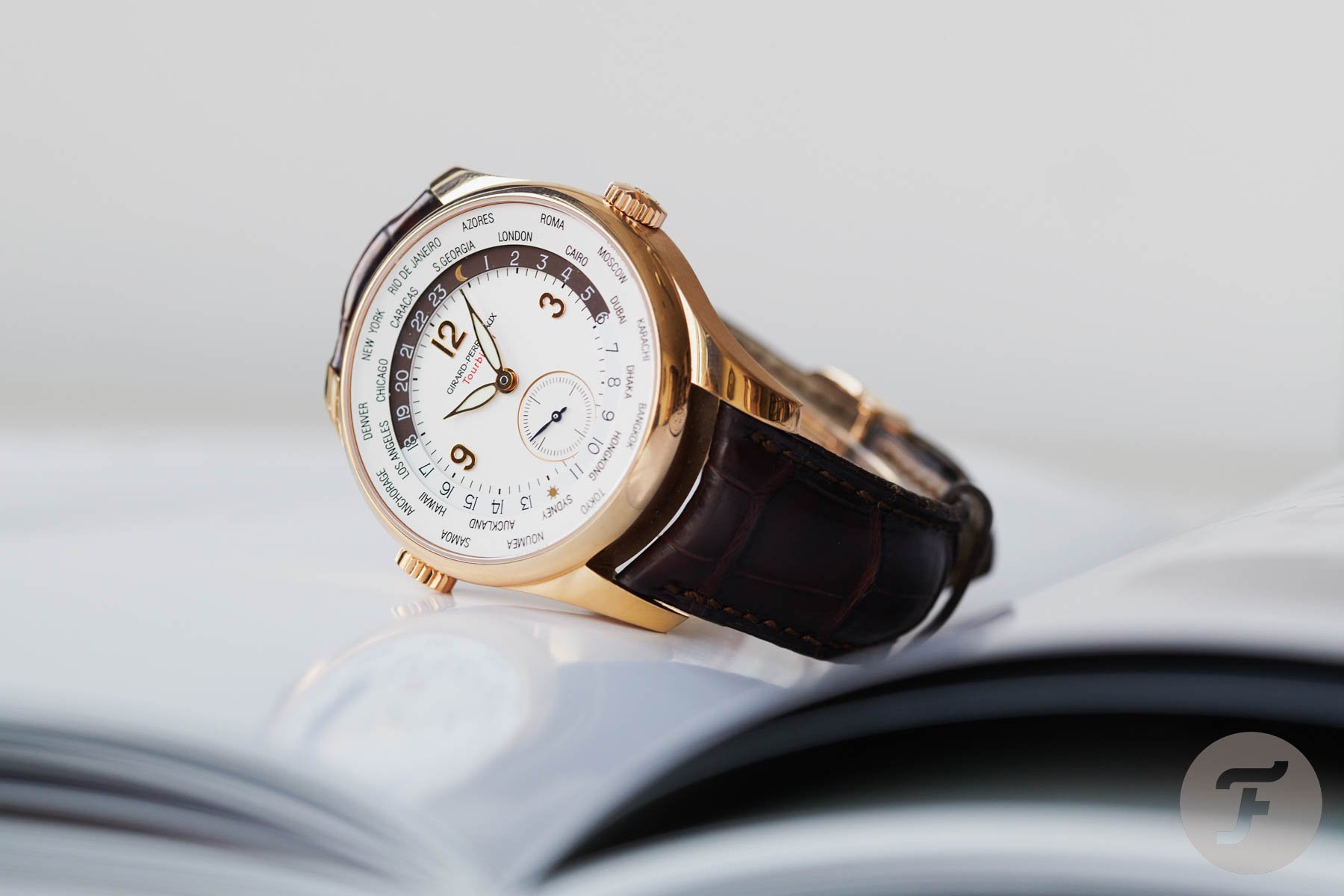 This piece features the immediately recognizable three gold bridges that appear in Girard-Perregaux’s tourbillon watches. However, this time they’re visible through the back of the case rather than on the dial side. This is in line with the design of the classic version of the original pocket watch movement, invented by Constant Girard in 1867 and patented in the US in 1884.

In 1889, the brand’s La Esmeralda pocket watch with tourbillon and three gold bridges was awarded a gold medal at the Paris Universal Exhibition.

Reference 99350 is a very rare variation of the design. The 18K rose gold case measures 43mm × 13.15mm. It displays a light cream dial featuring a world-time complication, and hour and minute Feuille hands in rose gold. Only a few pieces were produced annually from 2005 to 2010. The present lot is number 10 in the rose-gold series. 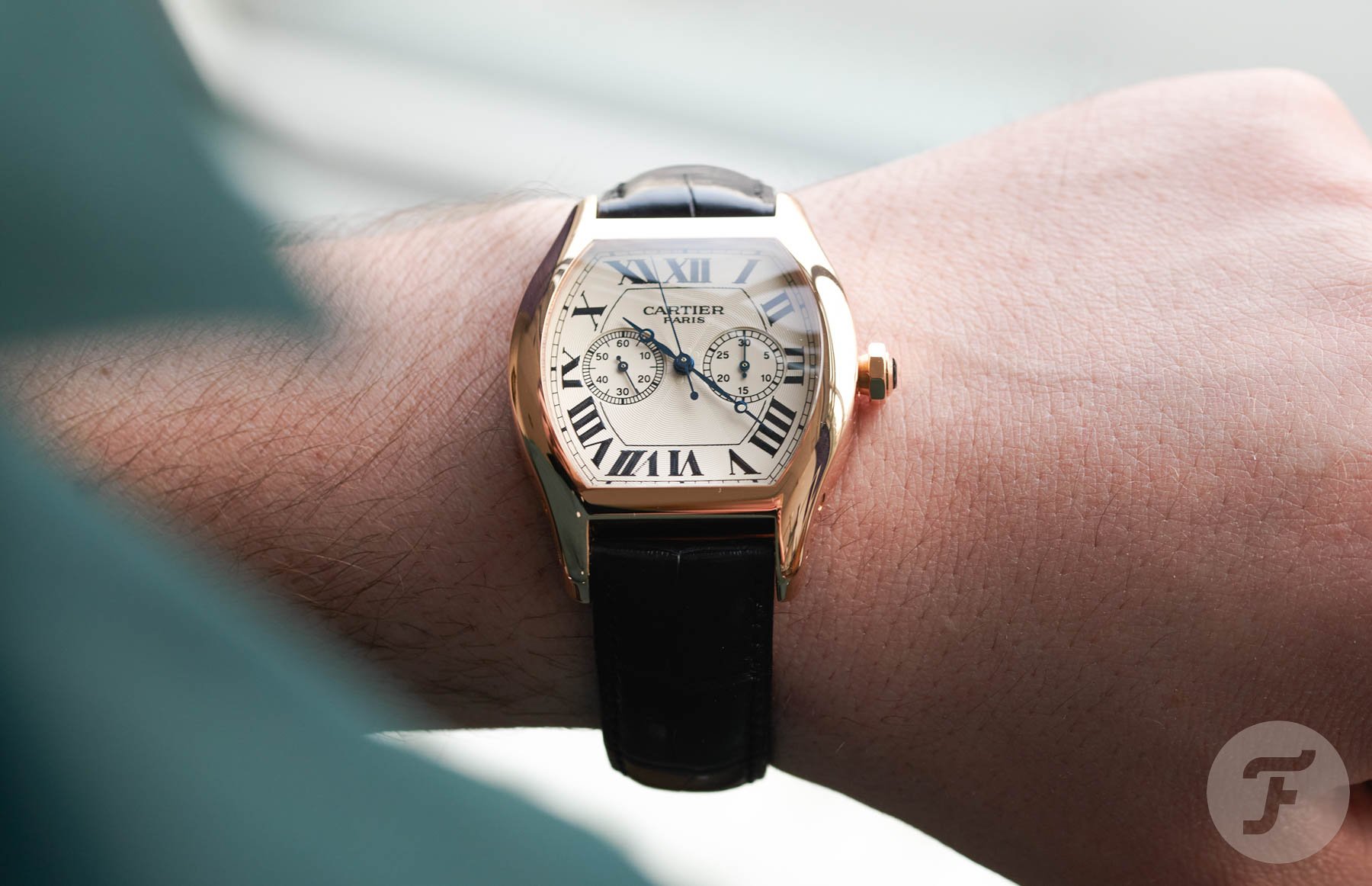 The Tortue Monopoussoir is one of the first timepieces from the Collection Privée Cartier Paris (CPCP) introduced by Cartier in 1998. The CPCP features watches based on historic Cartier designs but equipped with modern hand-wound and sometimes automatic movements, supplied by the likes of Jaeger-LeCoultre, Piaget, Frédéric Piguet, Gérald Genta, or Girard-Perregaux. The watches were produced in very limited numbers, and this model is discontinued.

The design of the Tortue Monopoussoir is based on the first wristwatch of this shape created by Louis Cartier in 1912, as well as vintage Tortue-shaped single-button chronograph wristwatches produced by the brand in the late 1920s and early 1930s. The shape resembles a turtle standing on four legs.

Watches in this line are equipped with a rare hand-wound movement, caliber 045 MC, developed by THA Èbauche — a collaborative movement manufacture founded in 1996 by independent watchmakers Vianney Halter, Denis Flageollet, and François-Paul Journe. This model features the caliber 045MC Mk2. It uses only monolithic steel springs (except for the fixing spring of the minute counter) and no additional bridge. Purchased in 2004, the case of this piece is 18K rose gold, measuring 43mm × 34mm × 10mm.

An e-catalog containing descriptive notes will be available at Ineichen.com. Alternatively, email [email protected] to request a catalog. Collectors can register pre-bids and participate in the auction live via the website. Bids can also be made online at invaluable.com, liveactionauction.com, or by phone via +41 44 298 11 44. Check out Ineichen’s official website here.

Hot Topics
Introducing: The Omega Speedmaster Super Racing With Spirate System
165 comments
New Release: The Limited-Edition Seiko Prospex SLA067J1 Diver
65 comments
My Predictions For New Omega Speedmasters In 2023
60 comments
The Best Independent/Microbrand Alternatives To The Rolex Explorer In 2023
53 comments
The Time To Buy Is Now: How The Current Economic Climate Influences Watch Buying And How You Should React
51 comments
Popular
A Question From A Reader: “Which Modern Speedmaster Is Closest To The Original Moonwatch?”
Robert-Jan Broer
14
Why Are There No Stainless Steel Rolex Watches Available?
Robert-Jan Broer
121
You Asked Us: Rolex or Tudor
Gerard Nijenbrinks
9