from the slopes of the Matterhorn
Gerard Nijenbrinks
comments ...
Share

Back in December last year, Oris invited us to Zermatt for a presentation of their 2019 models. And not only for a presentation, however, for a marvellous day of skiing as well. So far for our writing being totally unbiased.

While most of the models are under embargo and will be presented during Baselworld this year, one model was already introduced publicly by Oris two weeks ago. The Oris ProDiver Dive Control Limited Edition. 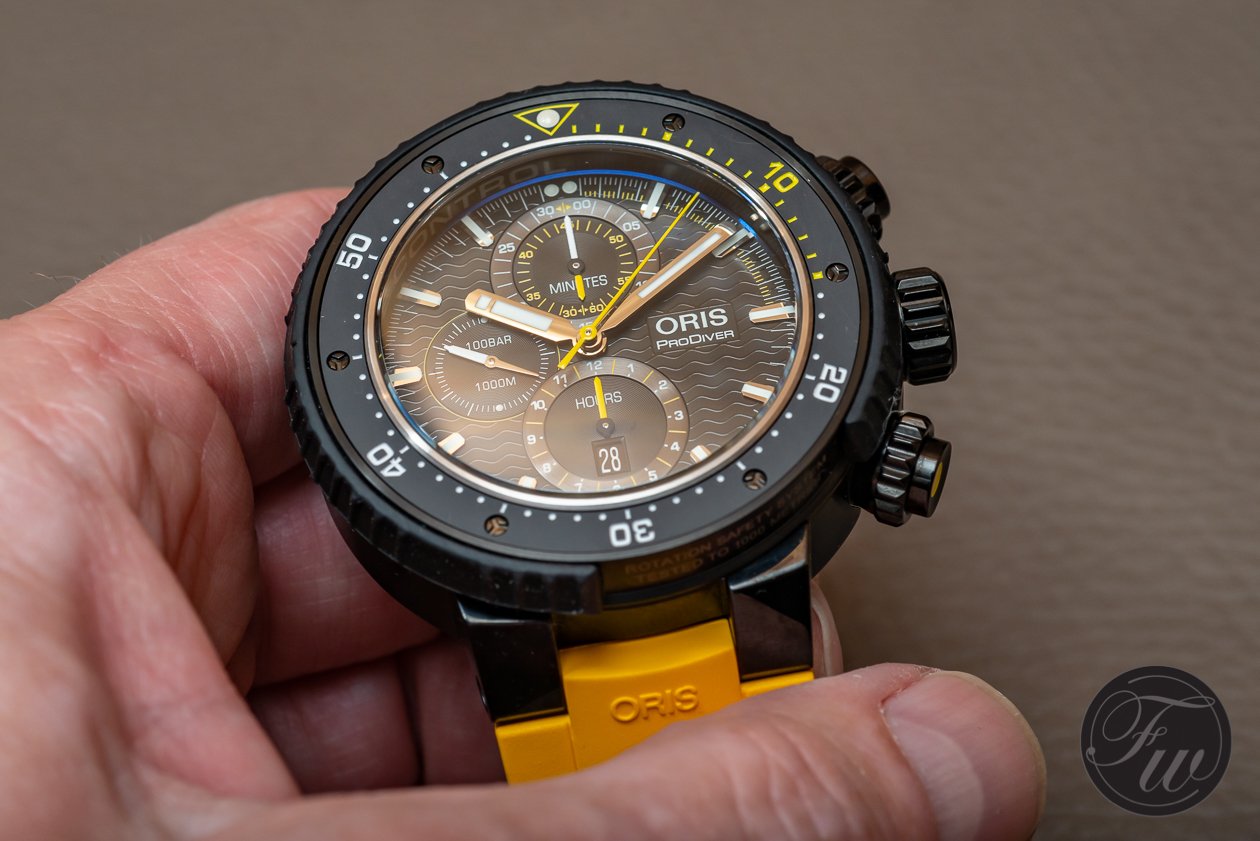 The all new and limited Oris Dive Control

The thing was that Oris introduced this model a few days before the havoc of SIHH 2019 broke loose. I see a high risk of the watch being snowed under and forgotten because of that. And I don’t think that’s what it deserves. So now, after the SIHH dust has settled down a bit, here’s our hands-on review of this professional watch. 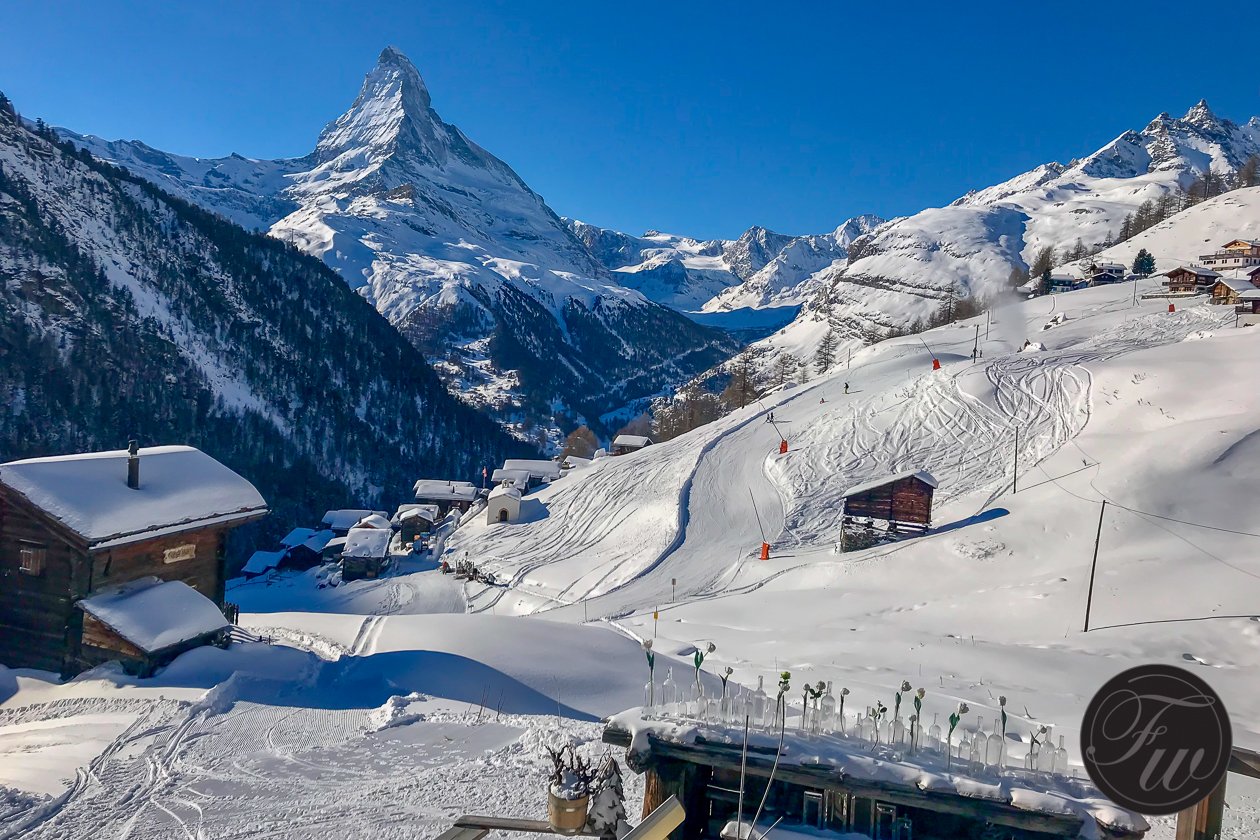 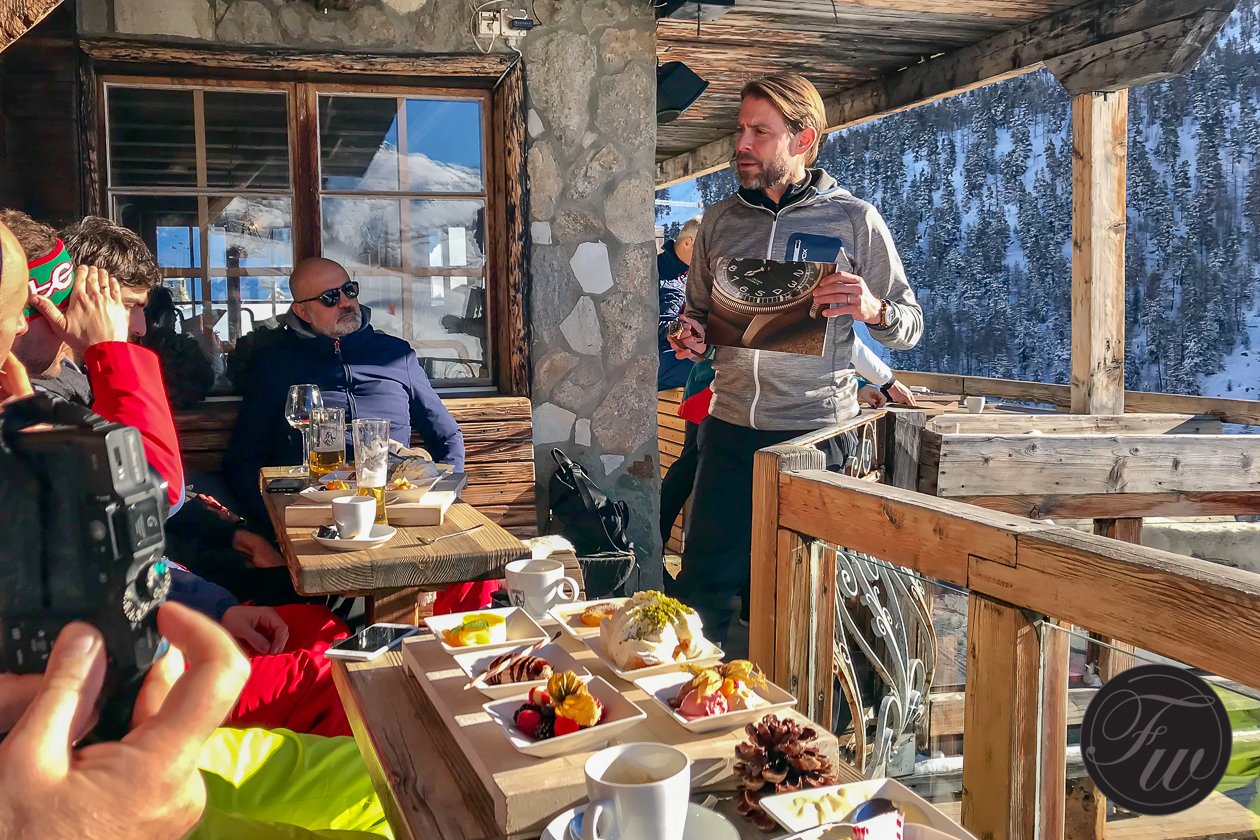 We all probably know that Oris produces divers watches for quite some time already. The current vintage-inspired Sixty-Five watch-line learns us quickly that Oris dive watches are around for way over 5 decades now. It was only in 2009 however that Oris, in cooperation with Swiss commercial diver Roman Frischknecht, entered the league of professional divers watches. The Oris ProDiver line was born. 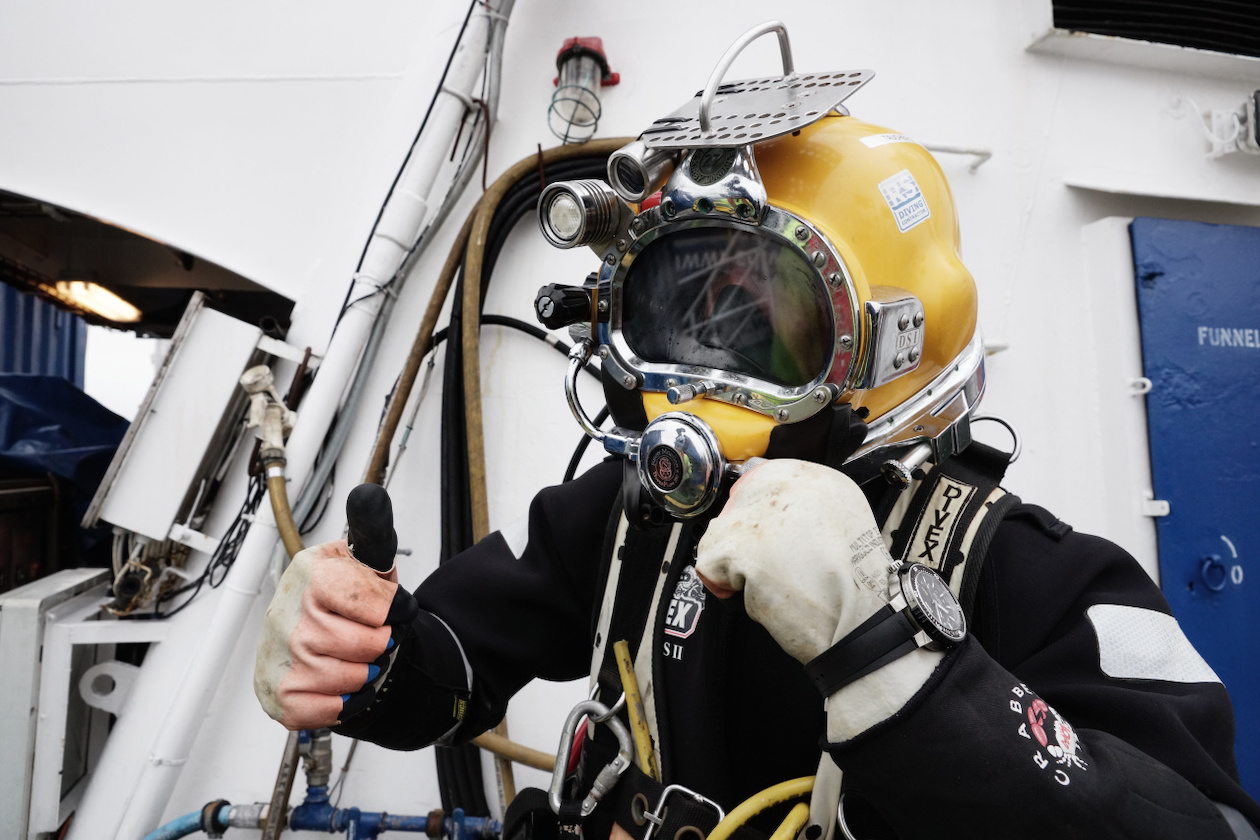 All watches in the ProDiver series have much in common. They’re all 100 bar, equals 1.000 meters, pressure rated. All models have the patented Rotation Safety System (RSS) bezel. While for the casing is chosen for grade 2 titanium, the bezels are stainless steel with a ceramic inlay. The current collection of ProDivers comprises of GMT, Chronograph and Pointer Moon models.

The real innovation of the Oris ProDiver series was the above mentioned Rotation Safety System, or short RSS. RSS is designed to lock a watch’s diving bezel securely in place during a dive and has meanwhile become an Oris signature. It can be operated as follows.

Hold the bezel’s black vulcanized rubber edge and lift it. This will release the lock and the bezel can be rotated. When lifted, a yellow ring will appear at the lower side of the diving bezel, to show that it’s free to rotate. 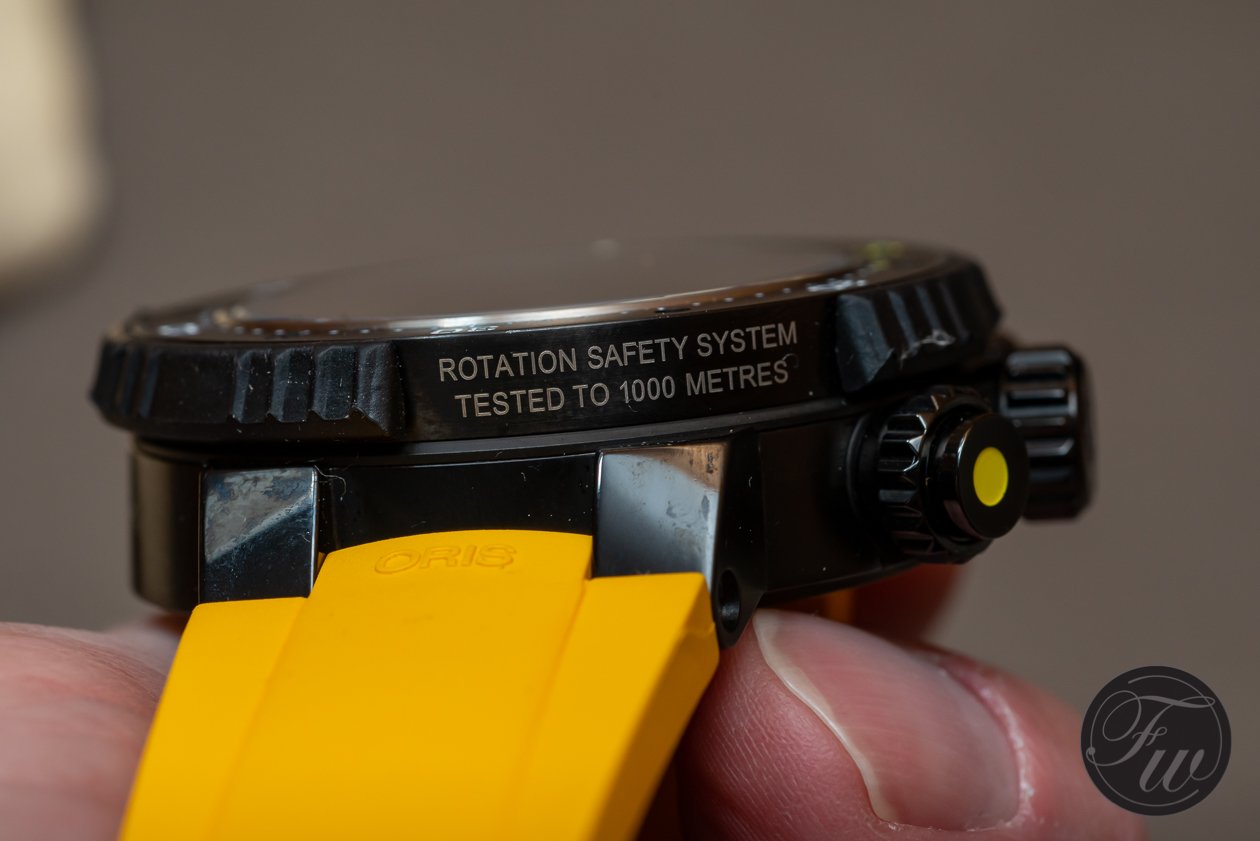 With this yellow ring now visible, the top ring can be turned anti-clockwise which allows aligning the number on it that corresponds to the available dive time, with the watch’s minutes hand.

Once set correctly, push the top ring down until it clicks into position. The bezel can’t be rotated anymore now and you are ready to begin the dive.

Of all constructions we’ve seen to secure a dive bezel – think about the red knob of an Omega PloProf or the rotating flange of a Citizen ProMaster – Oris’ RSS solution certainly is one of the more suitable and easy to operate variations. 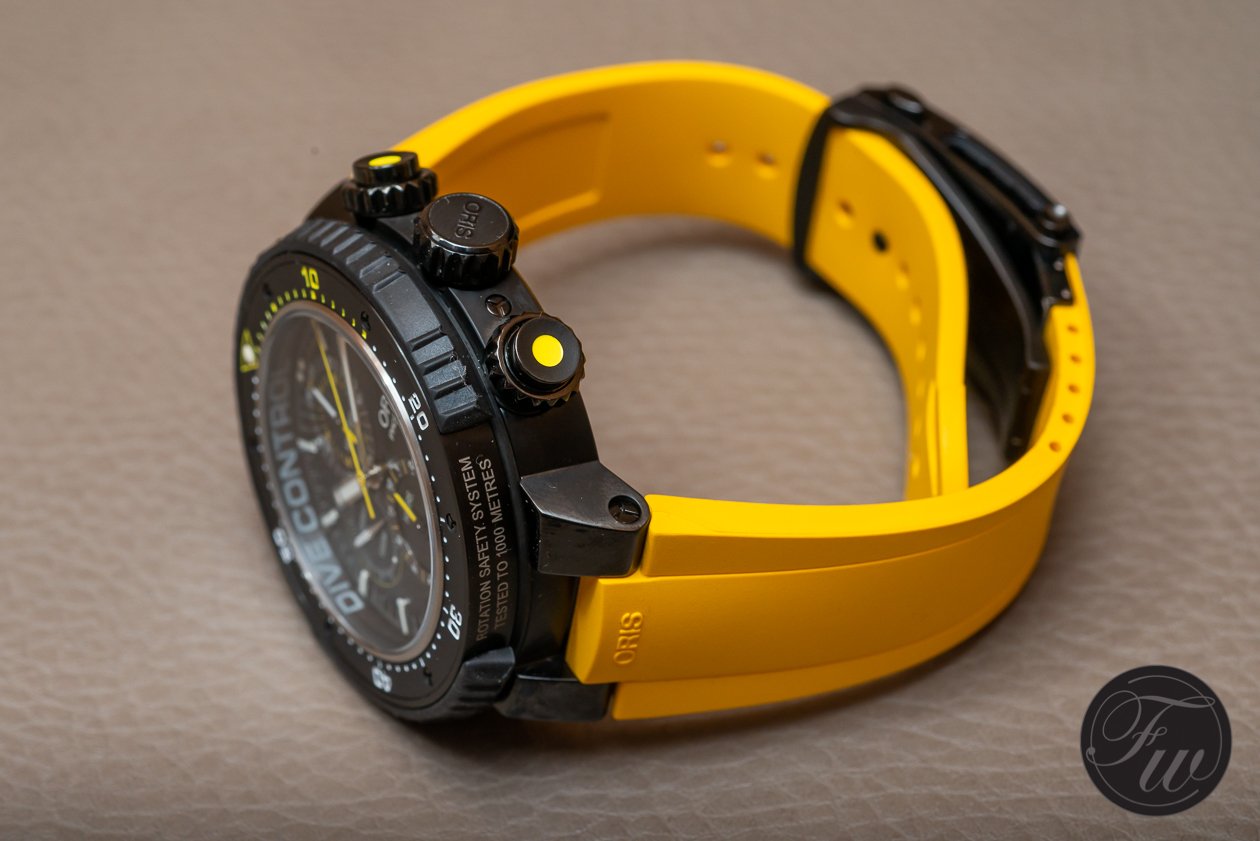 What didn’t change was the size of the watch, the type of movement, and of course the RSS locking system. The multi-piece titanium case of the Dive Control still has a whopping diameter of 51.00 mm. Which, according to the Oris website, seems to be 2.008 inches. There’s no mention of its thickness, and I must admit I forgot to measure it as well, but it’s certainly not insignificant.

The crystal is in sapphire, domed on both sides, and has an anti-reflective coating on the inside. Of course, the crown is of the screw-in type, as are the chronographs pushers. The Dive Control Limited Edition sports an automatic helium valve as well and is still pressure rated at 100 bar, equalling 1000 meters of water. 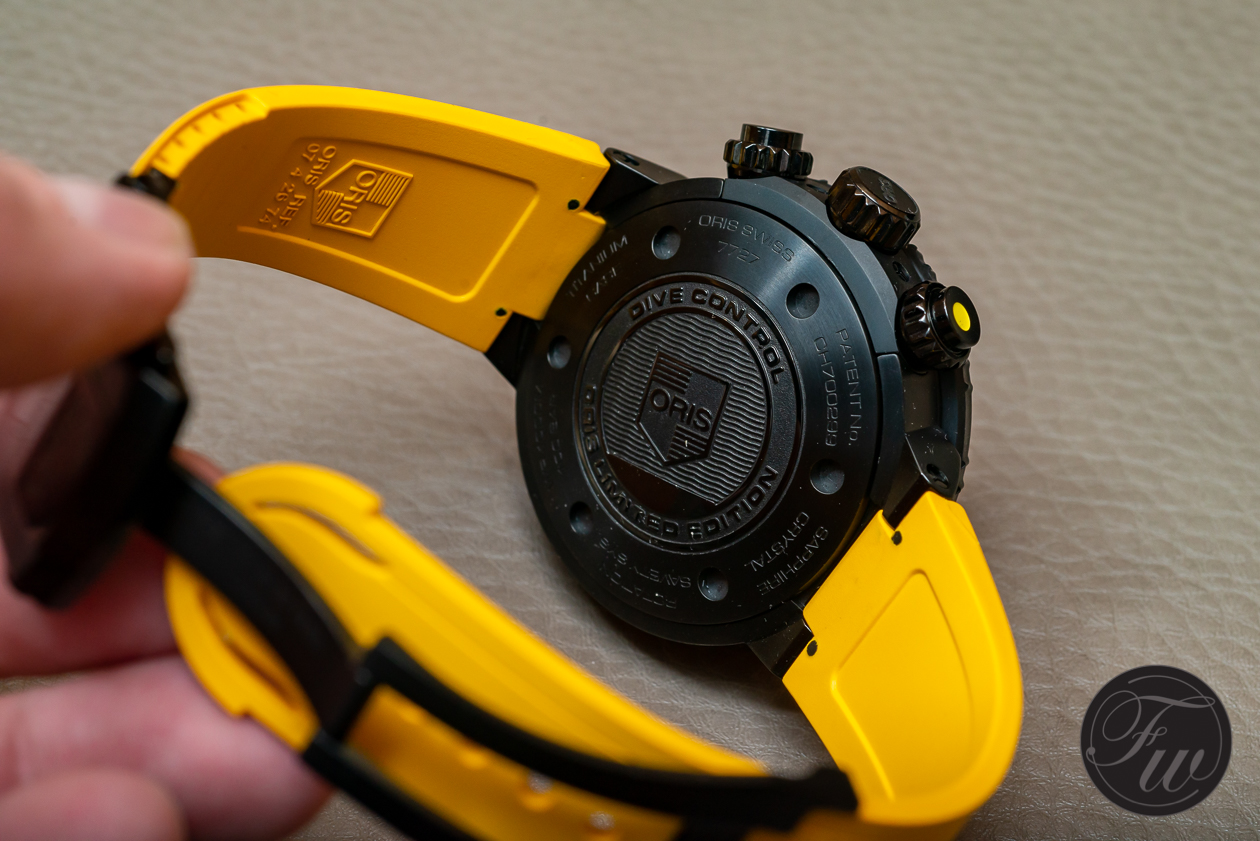 So what ís different?

The first thing that hits the eye is the color scheme of the Dive Control LE. While the regular ProDiver Chronograph is a rather monochrome appearance, the Dive Control LE is completely black with some eye-popping yellow accents. Specifically, as we pictured it, fitted to the additionally supplied yellow rubber strap. This all is mainly caused by the black DLC plating of the titanium case and bezel, the new color scheme of the dial, and some details on the pushers.

As well, only 500 pieces of the Oris Dive Control LE will be produced, while the regular ProDiver Chronograph is not limited in production numbers. 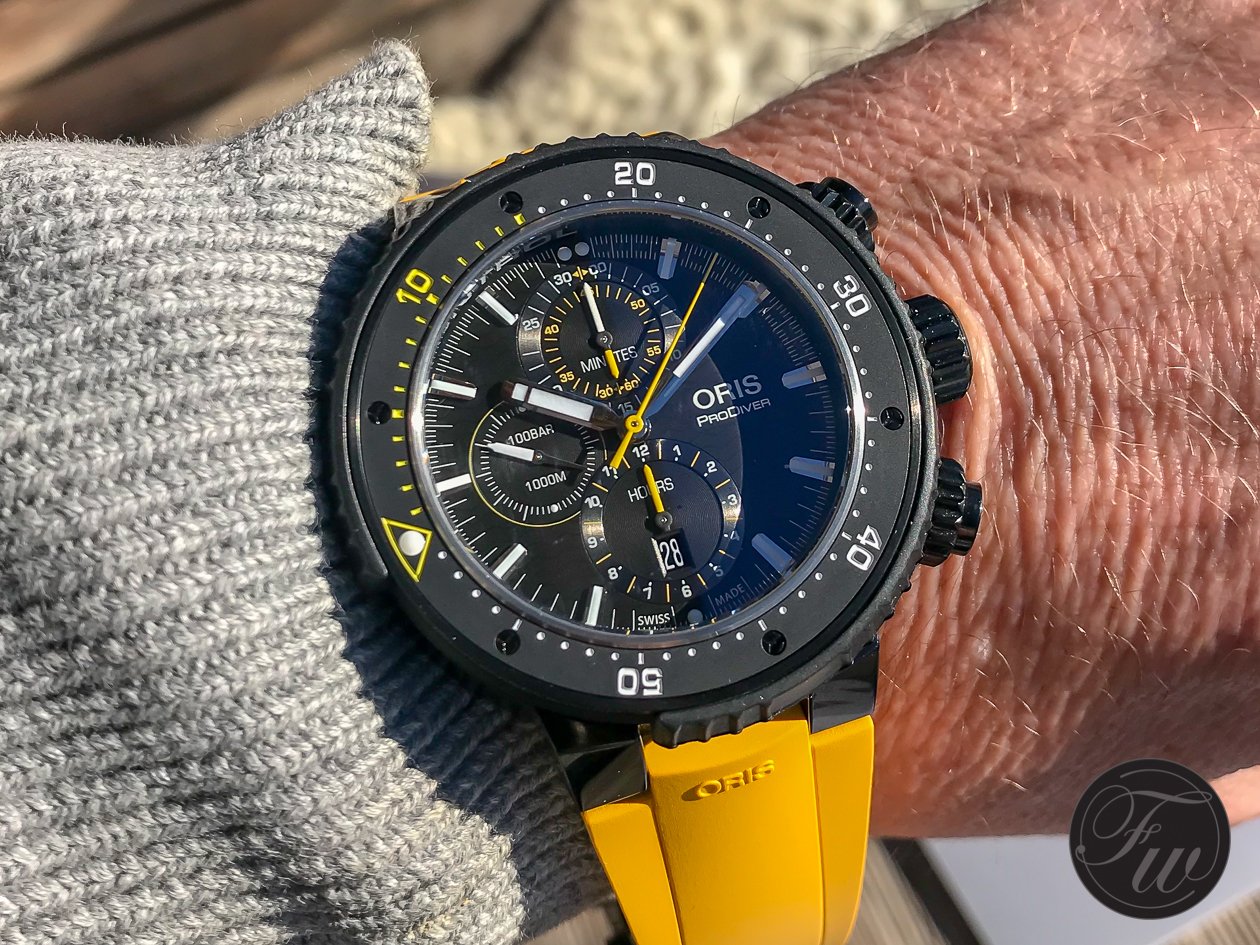 Investigation learned us that Oris had solved this in a very Oris way, with two different hands in one counter. A large white hand indicating the minutes on a white scale, and a shorter yellow hand pointing at a yellow scale. Additionally, the chronograph hour counter hand will point at white numerals while the white minute hand shows from 0 to 30. And then the chronograph hour counter hand will point towards a yellow marker indicating that the yellow minute counter hand shows from 30 to 60. I’m not sure how practical usable this is while under water, but nevertheless, a smart solution.

Leaves us to mention that the Oris Dive Control Limited edition comes supplied in a sturdy and waterproof, Peli-case-like, presentation box. It includes an additional rubber strap and professional strap changing tools. 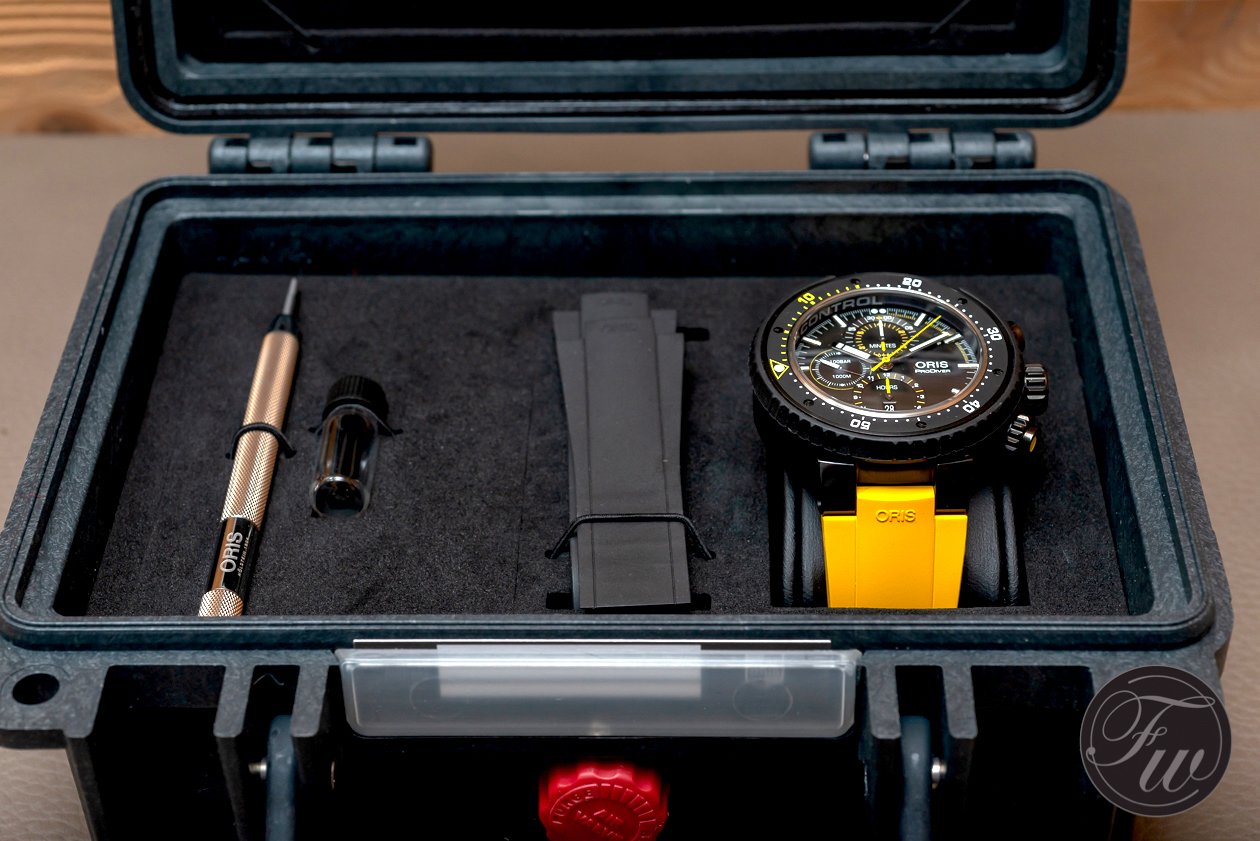 More information can be found at www.oris.ch

The all new and limited Oris Dive Control

Hot Topics
Introducing: The New Seamaster Professional 300M 60 Years Of Bond — With A Special Animated Case Back
100 comments
It’s Time To Invest In A Dress Watch — Our Picks From Breguet, Omega, Grand Seiko, And More
67 comments
Are You Still After An Omega × Swatch MoonSwatch?
65 comments
Sunday Morning Showdown: The Tudor Pelagos Provocation — Pelagos Vs. Pelagos 39
55 comments
The Rolex Waitlist Conundrum — How Much Will The Price Of Your Watch Increase While You Wait?
48 comments
Popular
Rolex GMT-Master History And Overview Of All Major References
Robert-Jan Broer
18
Certina DS PH200M – Hands-On Review
Balazs Ferenczi
23
(From The Archives) Shut Up & Read The Truth About Cartier Watches
George Cramer
21