In the first episode of our special Watch Strap Review series, we’ll take a closer look at the Doxa Expandro bracelets.

Vintage watches are awesome for so many reasons. They either represent an era in watchmaking history or perhaps connect you to a loved one as a family heirloom. Vintage watches might have a complication that is still interesting and scarce after many years. We have discussed vintage watches at a great length on Fratello. From simple 3-handers to complicated timepieces, Fratello has covered loads and loads of vintage timepieces from hundreds of brands. Do not worry, we are continuing to do that. After all, this is one of our forté. Though we have to focus on “other stuff” that comes with a watch. And what are those accessories you get/want most of the time with a timepiece? Bracelets, of course. In this resurrected Watch Strap Review series, we will look at some of the legendary bracelets we vintage collectors’ hunt to complete our precious timepiece. Like the Doxa Expandro. 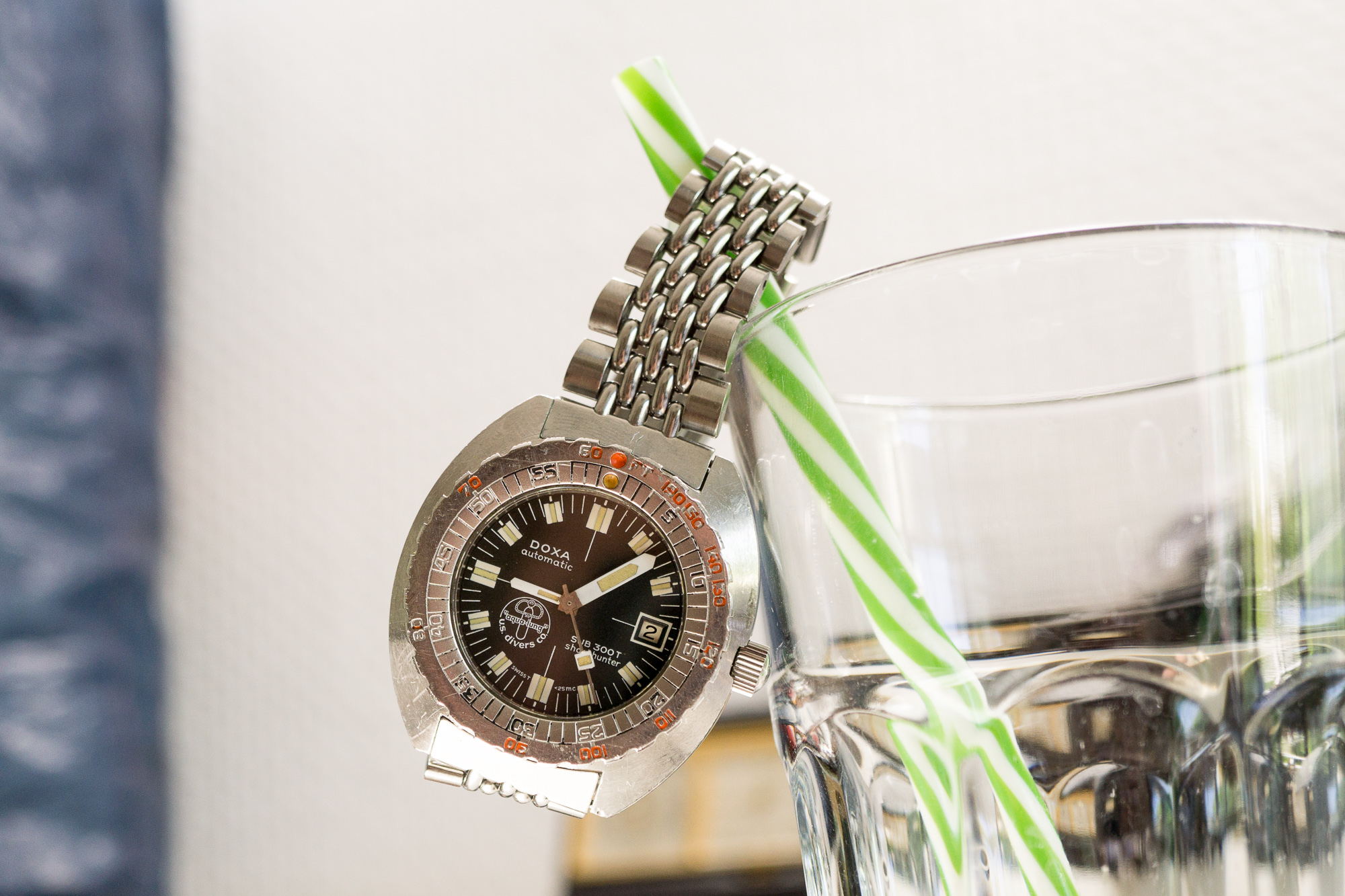 When it comes to accessories my view on the question is the following; You can’t wear a box, it adds no value to the watch to me. Unless we are talking about something really special and perhaps also with papers. If you collect something just for storing it in the safe that’s fine, but if I’m looking for a vintage watch just because it comes with a box but perhaps no papers, it is not a plus – for me. This, however, is not the case with bracelets. Certain watches can command a significantly higher price if the original bracelet and end links are there. Just think of a Rolex GMT 1675 with an original riveted oyster bracelet. Omega a Pre-Moon Speedy with a 1039 bracelet and 516 end links. Lastly, a vintage Doxa Sub 300(T) also reaches 20-30% more if its original beads-of-rice or BoR Expandro is with the watch. 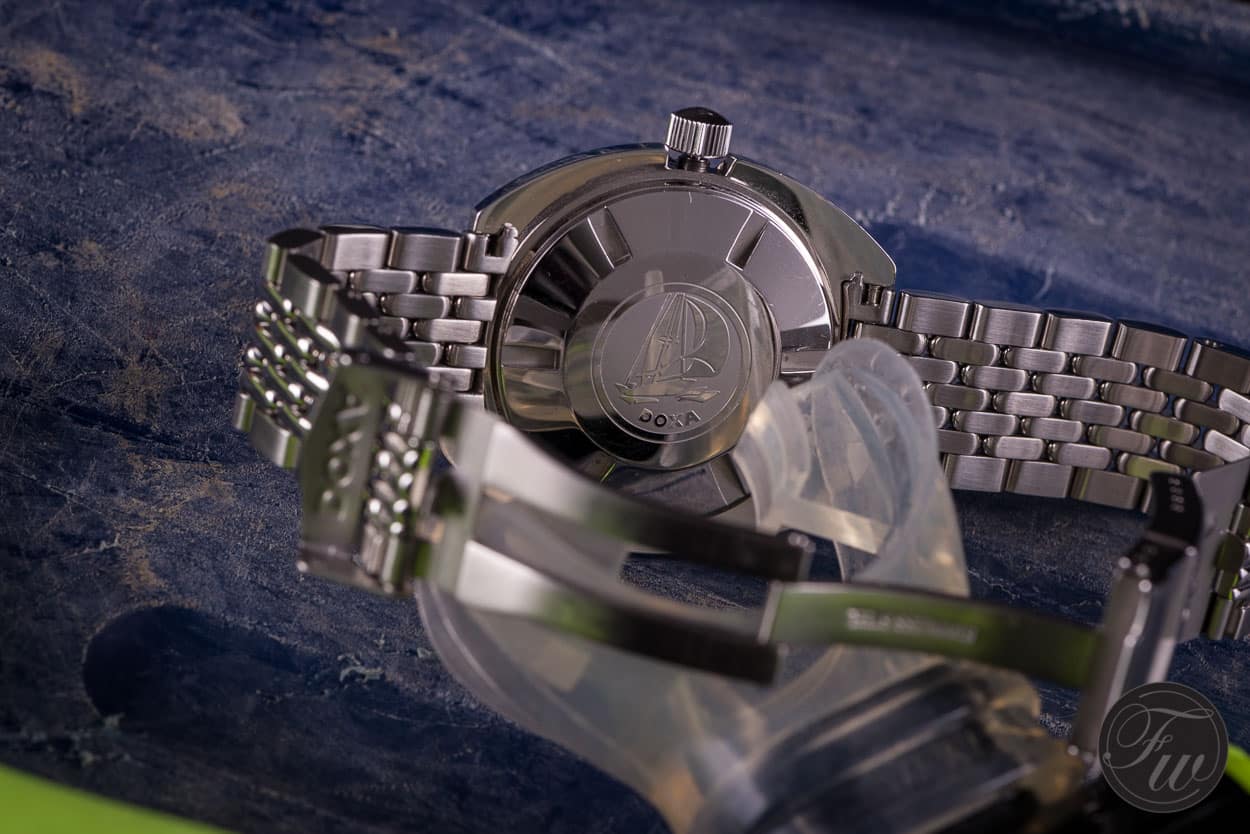 The new Doxa bracelet – the looks are there, but that special feeling is gone

There are many vintage Doxa collectors and experts out there and I’m not one of them. Therefore I do not want to get too deep into the production of these bracelets. My aim is rather to bring these amazing, technically well-developed bracelets to a wider audience. Introduce it to someone who might have not seen or heard about them. Lastly, to show how they work and what clever little tricks they contained that made them a huge favourite among Doxa wearers and beyond. I’m sure many of you have read our article on the Doxa 300 SubT Sharkhunter. There is a chapter about the bracelet in there that would give you a basic idea about them. But let’s look at them a bit closer. There are 3 different versions and 4 clasp variations. The earliest ones (like mine) had a clasp with “Doxa Sub 300” on them. 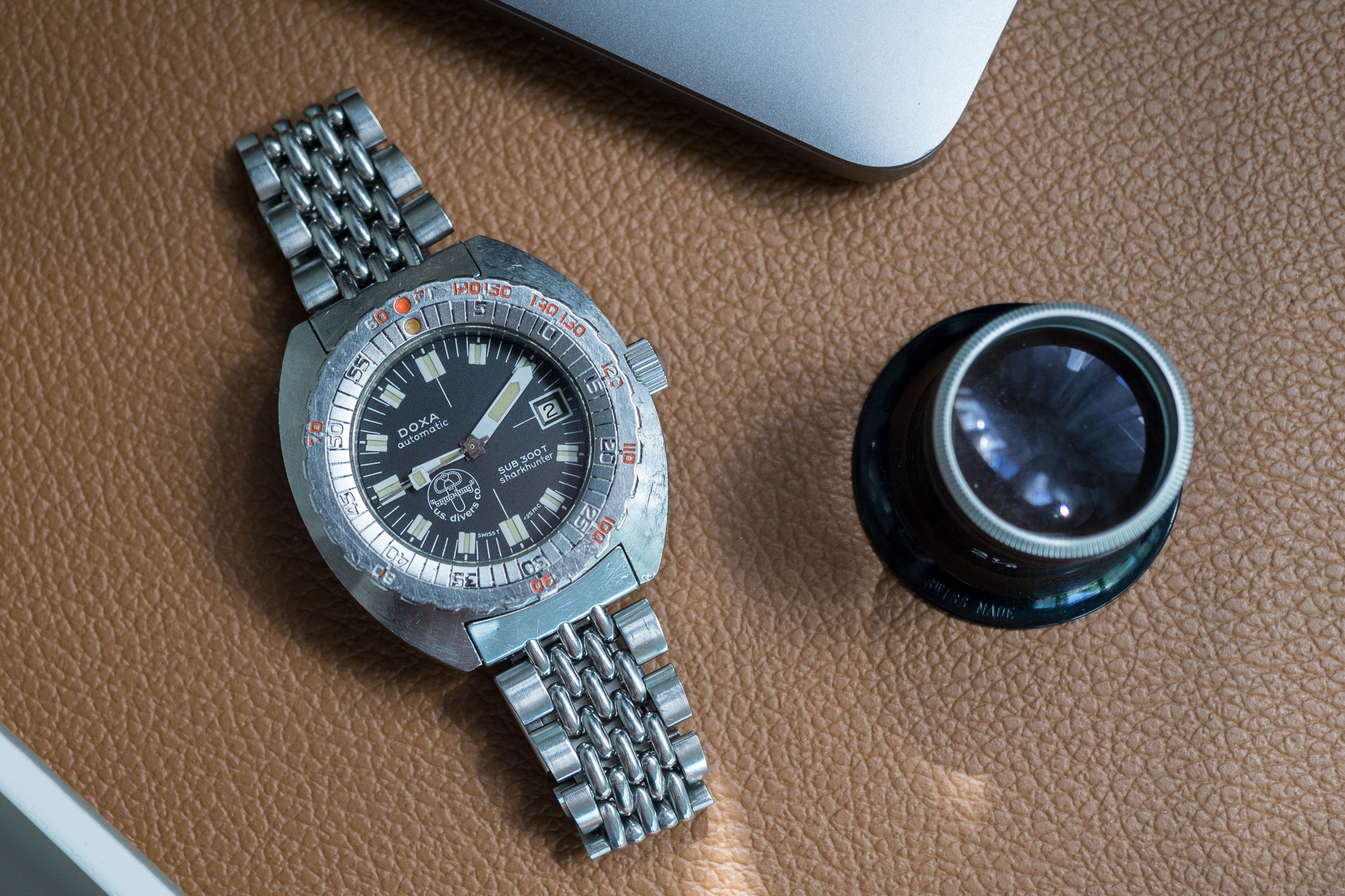 This is the one we will talk about. When the earliest Doxa Sub 300 came out in 1967 it had this bracelet on with a pair of matching end links. Those links have a reference number of 7720-4. Soon after the Sub 300, when Doxa released the second generation of Sub 300 T’s the same bracelet came with the watch but with a new pair of end links. It was the reference 7720-10 a slightly different version of the 7720-4. The T signified the presence of Tritium on the dial, such as the case with most vintage watches at the time. Collectors often refer to these bracelets as “Expandro” due to the expanding links on the bracelet however early versions were not marked as such. Mine only has a “Stainless steel” stamp on the inside of the claps. Expandro branded (made by a West German company, Kiefer-Cadman) bracelets came later.

How the expanding links work

I’m not saying that Expandro was not the producer on the early bracelets, on the contrary. The system Expandro branded bracelets used (as the company sold neutral bracelets too under their own brand name) was the same as Doxa’s. So, the connection is there. But what exactly are those features? To start with, beads of rice bracelets are among the coolest looking vintage bracelets out there. They are light but sturdy, classy yet still rugged enough to be added to a sports watch. However, looks are barely the trick here. On both ends of the clasp, you have a thick link which can be viewed as a design element, or a reinforcement of the clasp. It’s more though. Similarly, to the Omega 1039 bracelets, those links are springs inside that can expand (hence the name Expandro) to provide the watch to sit comfortably on your wrist. 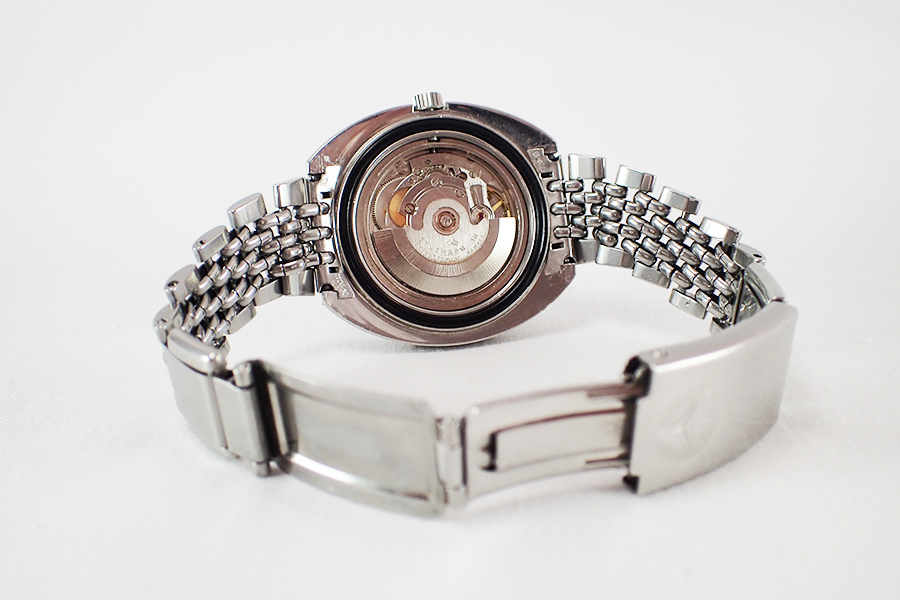 Whether you’re wearing a wetsuit or not, it’s not an issue. Diving extension from the late 60s, something you don’t see anymore. Sadly, due to their age, rust, and extensive usage, these springs tend to break, and they aren’t easy to repair. Still, if you sized the bracelet right you can wear it all year long. The expanding links, however, are only half of the trick. Remember how most clasps have micro adjustments where you can resize it by moving the spring bar? Doxa had the same micro adjustment but, just like you’d have with modern bracelets, you could do it by the push of a button. There is a ratchet system inside the clasp. The clasp also had a safety push button. When you press the button in, it pulls in a tooth allowing the ratchet to slide in or out. This way you could size the clasp.

Using the push button to adjust the clasp

On many clasps, the button is broken off, so the micro adjustment is not working anymore. This is pretty much impossible to repair unless someone welds a new push button to the clasp. Even then the functionality is not guaranteed. Other than this the aforementioned issue with the springs also happens often. Luckily enough my bracelet is working just fine. However, due to these known issues, I’m a bit reluctant to wear the watch on the BoR. A third problem also occurs often though I’d not call it a fault; the bracelet is an arm hair killer. Not sure if this is the case with everybody or I’m the only one suffering from this but it definitely not a comfortable feeling to have your arm hair pulled out regularly. This could happen due to the fact that the bracelet is very light compared to the heavy head of the watch. 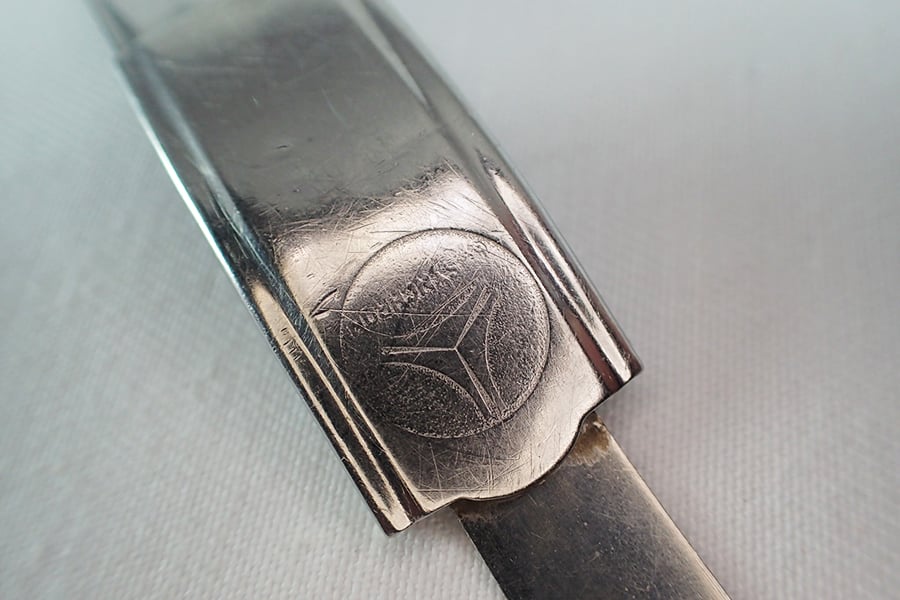 Synchron era clasp with the round logo – photo by Localtime www.gregoriades.com

As I mentioned above you can find these Expandro bracelets with4 different clasp versions. The “Doxa Sub 300” that we just took a closer look, two Synchron-era versions (with and without a circle around the Synchron logo) and one that only said “Doxa” on the clasp. It’s worth noting that Synchron S.A. bought Doxa in 1968 and owned the brand until 1978 (Synchron era). That year it was sold to Aubrey Fréres S.A. (Aubrey era) who in 1997 sold it to their current owner, the Jenny family. As a side note, in 1981 a Doxa Sub 300T on a bracelet was $490. That is the equivalent of $1,350 today. Sadly, the quartz crisis didn’t only damage the watch department of the industry but the accessories too. After that, the art of bracelet making disappeared and with it went the Doxa Expandros too.

I’d like to thank Mr. Andreas Gregoriades (LocalTime) and Montres Doxa S.A. for their help with my research.