Last year, I had the chance to go hands-on with the Linde Werdelin 3-Timer Nord. This version of Linde Werdelin’s most successful model introduced a black to blue fumé dial inspired by the North Sea’s colors. In a follow-up to that release, Linde Werdelin now releases the Spidolite Nord and Oktopus Nord. Time to find out if the characteristic fumé dials have the same impact as on the 3 Timer Nord.

Every time Linde Werdelin releases a new watch, I am all ears. Even when it is a rather straightforward introduction of a new dial color, I am always curious to find out what it looks like and if it beats my favorite versions the brand has released. But it’s not just seeing a new color that creates excitement. It’s a reminder of how much I like what Linde Werdelin has done when it comes to designing great watches. The characteristic case designs are as much functional as they are aesthetically beautiful. 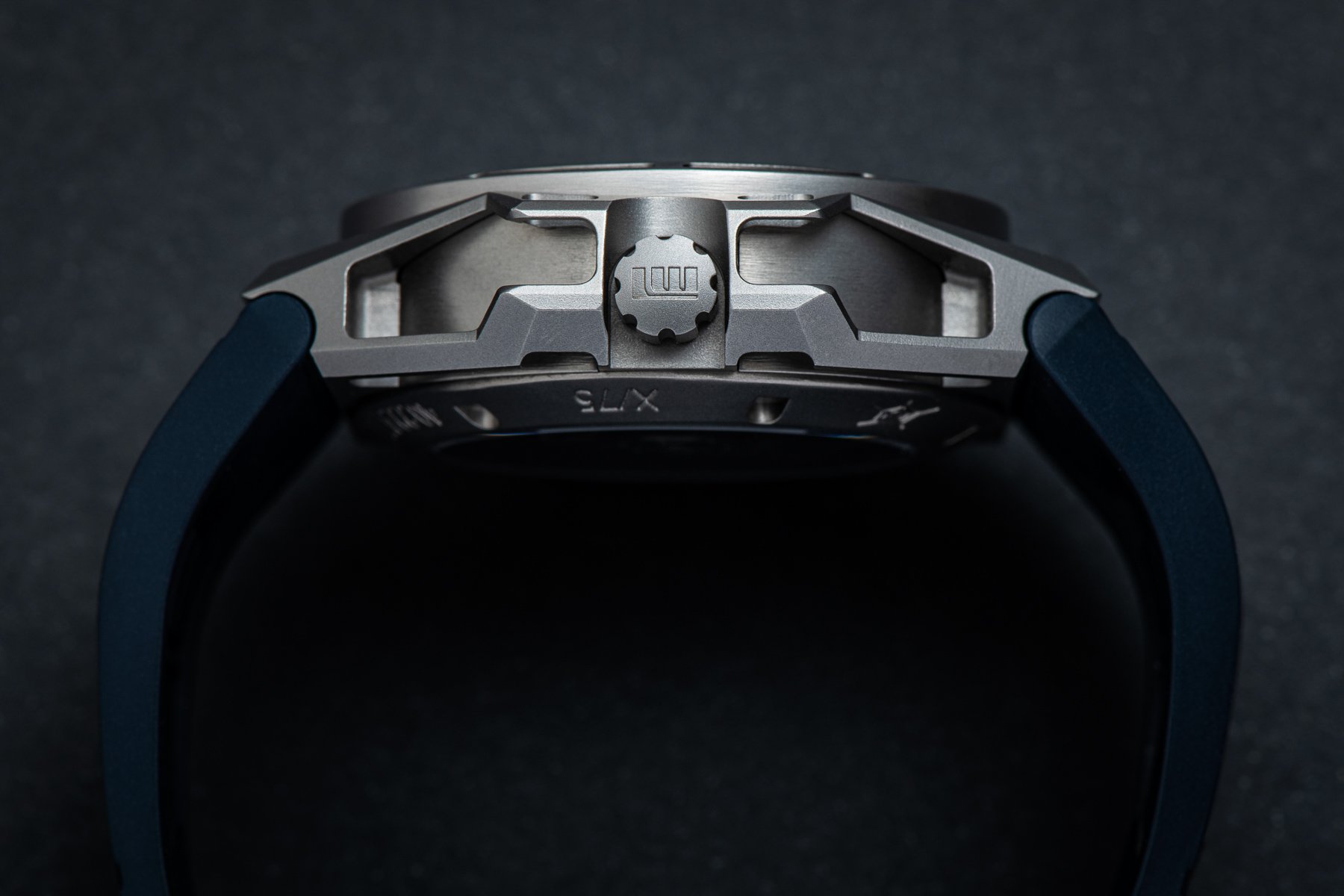 My favorite Linde Werdelin model has always been the 3 Timer. It finds a great balance between characteristic case shapes and a toned-down dial design. Additionally, it features a GMT complication which also happens to be my favorite complication. So when the brand released the 3-Timer Nord last year, I was more than happy to try it out for a review. It was a great reminder of what makes the 3-Timer such a great watch. But it also added a new dial color to the line-up that is more than just a color for me.

As I explained in the review, the black/blue fumé dial color is inspired by the changing colors of the North Sea. A fitting choice because founder Jorn Werdelin is from Denmark but lives in London, England. It’s also the city where Linde Werdelin is based. The sea between Denmark and England is the North Sea, so there is a personal touch to the dial color. It’s a personal touch that I can relate to. The North Sea is also the sea you will find if you visit most of the coastline in The Netherlands. For their latest two releases, Linde Werdelin decided to equip the Spidolite Nord and the Oktopus Nord with the same black/blue fumé dial inspired by the colors of the changing depths of the North Sea. 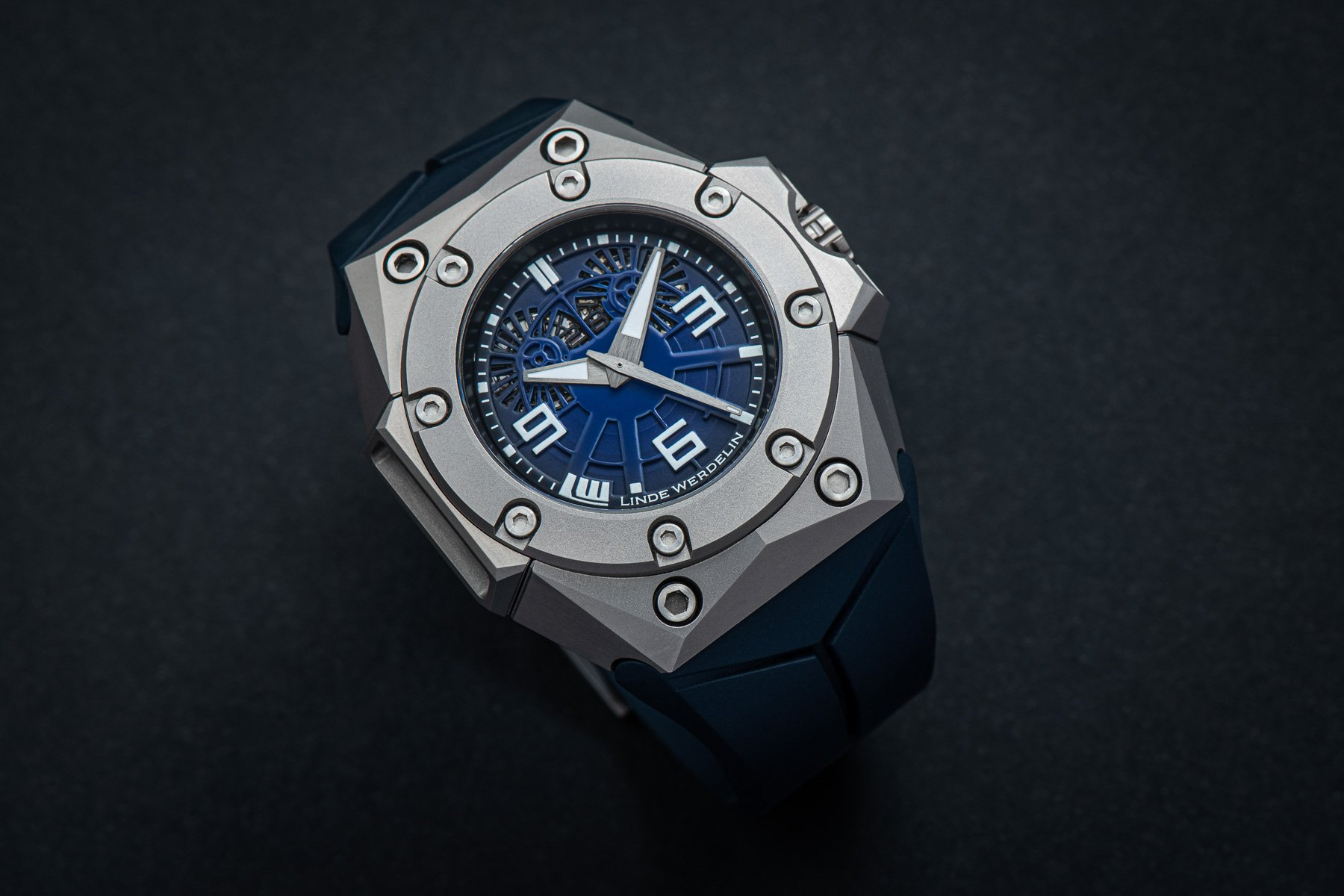 The first of the two models is the Oktopus Nord. The Oktopus line is Linde Werdelin’s line of diving watches. Within the line, there are the Oktopus Moon and Oktopus Double Date models. The Oktopus Nord is part of the latter models that are water-resistant up to 300 meters. The watch features a 44mm by 46mm sandblasted titanium grade 2 case that is 15mm thick. It is a large case that gives the watch an incredible wrist presence. But it’s effortless to wear due to the titanium that is used for the case. Obviously, this is not a watch for people with smaller wrists because of its size. But if you can pull it off, it is absolutely great to witness on the wrist. 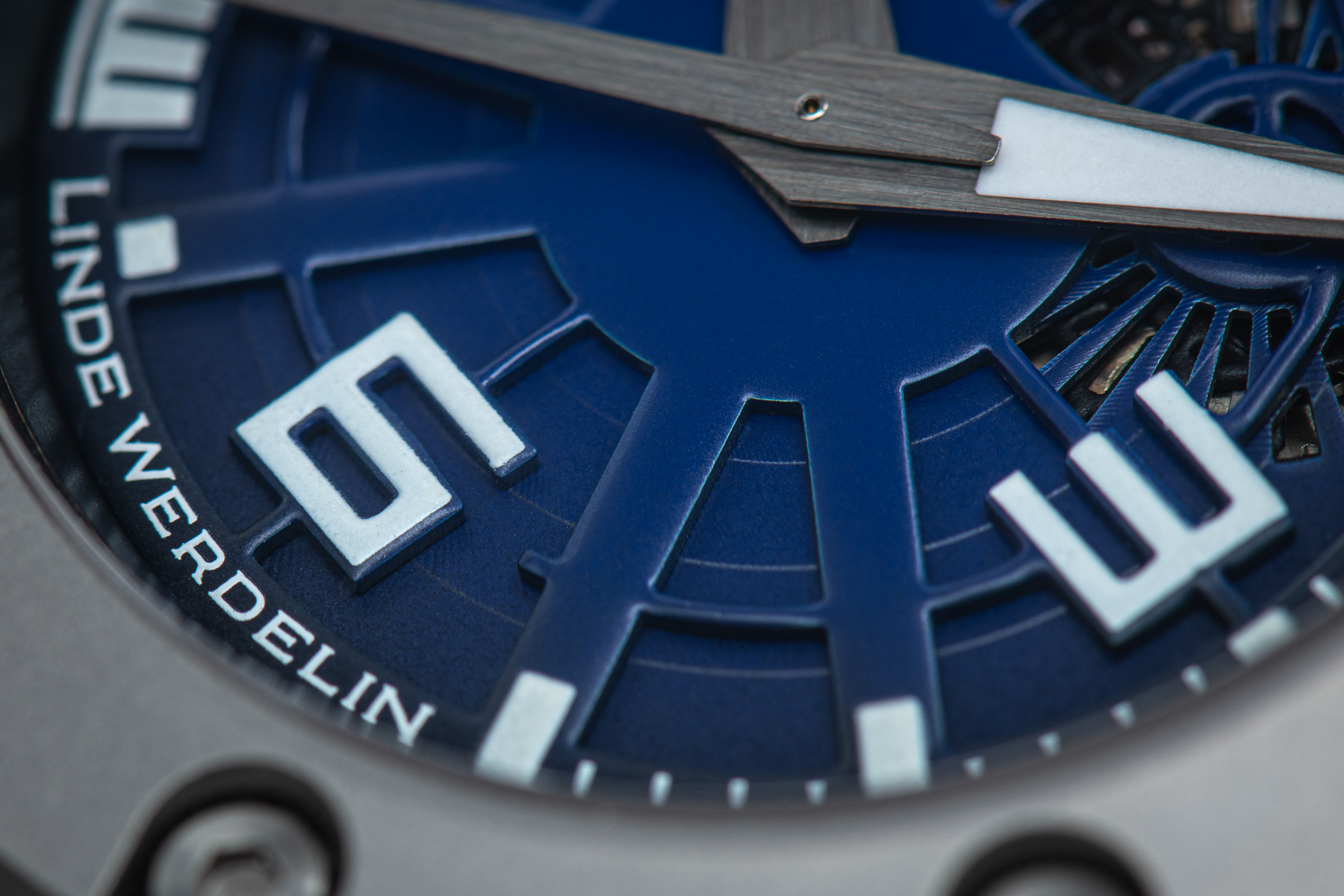 The black/blue fumé dial is more subtle than on the 3 Timer as part of the dial is open. It’s actually a two-layer dial with the upper layer laser-cut in stencil technique. The dial features large 3, 6, and 9 numerals filled with ultramarine Super LumiNova and a date dial at 12 o’clock. I have to say the fumé dial works great as it’s rather subtle. I can imagine it has you looking at the dial constantly to check out how it works in different light conditions. Hovering above the dial are the stainless steel hands that are satin finished and filled with ultramarine Super LumiNova. If you turn the watch around, you will find the closed titanium case back that features an engraved octopus drawing. Inside the fully titanium case — a first for the current Oktopus as previous models featured a ceramic bezel — a modified Dubois Dépraz double date caliber 14580 powers the watch. This automatic movement operates at 28,800vph and has 26 jewels and a 40-44 hour power reserve. The watch comes on a beautiful dark blue rubber strap that is easy to change, thanks to Linde Werdelin’s easy interchangeable strap system. A limited number of 88 pieces of the Oktopus Nord will be produced, and it is available for £8,000 or around €9,330. 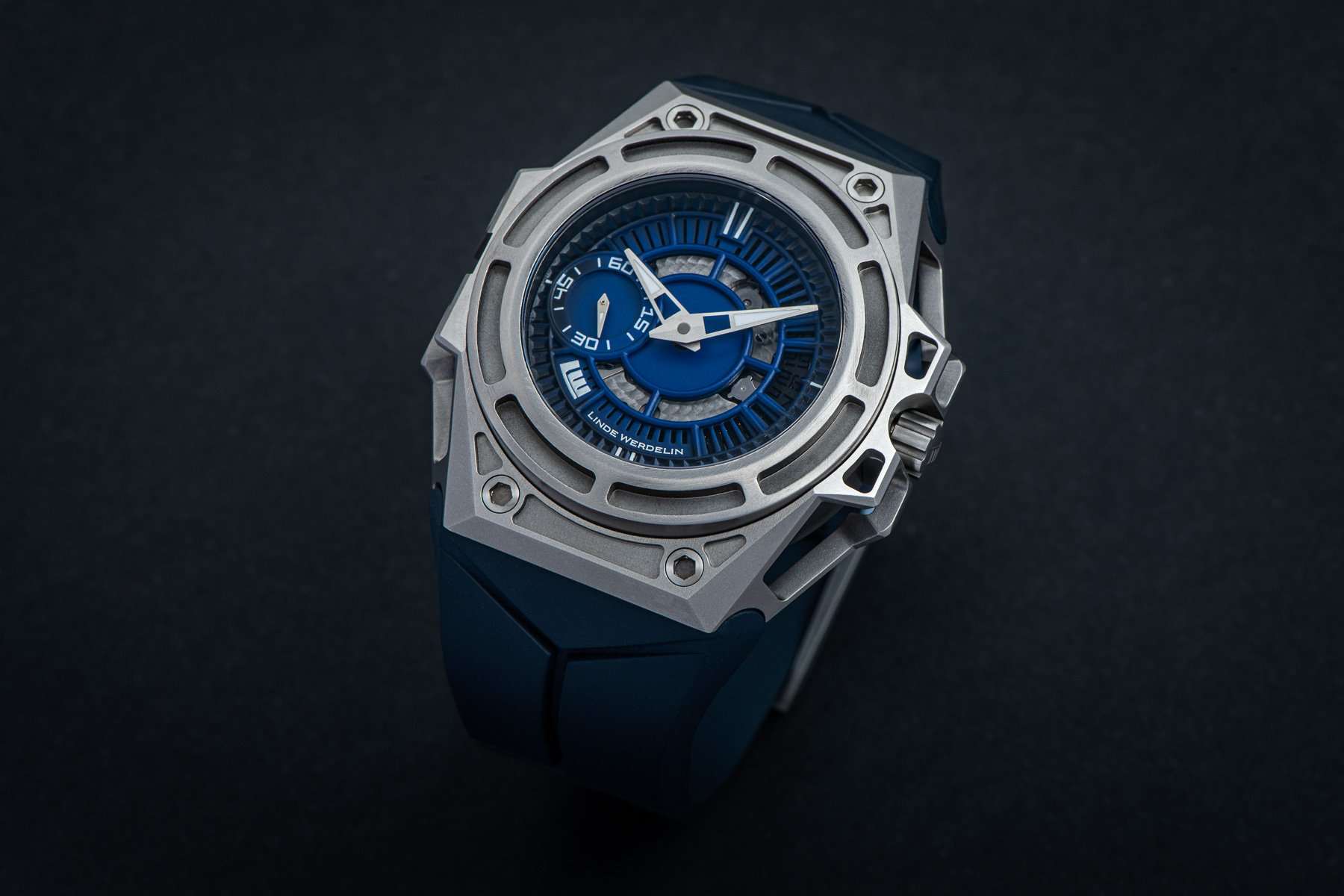 The second model is the Linde Werdelin Spidolite Nord. The Spidolite has always been a close second for me after the 3 Timer. That’s why it’s great to see this new version of the Spidolite with the same black/blue fumé dial. The concept of the Spidolite is based on reducing as much weight as possible but maintaining a robust case construction. This concept has resulted in a characteristic 44mm by 46mm case that is also 15mm thick and combines form and function perfectly. For the Spidolite Nord, the case is executed in titanium grade 2 with a satin finish that gives the characteristic case a great understated finish. 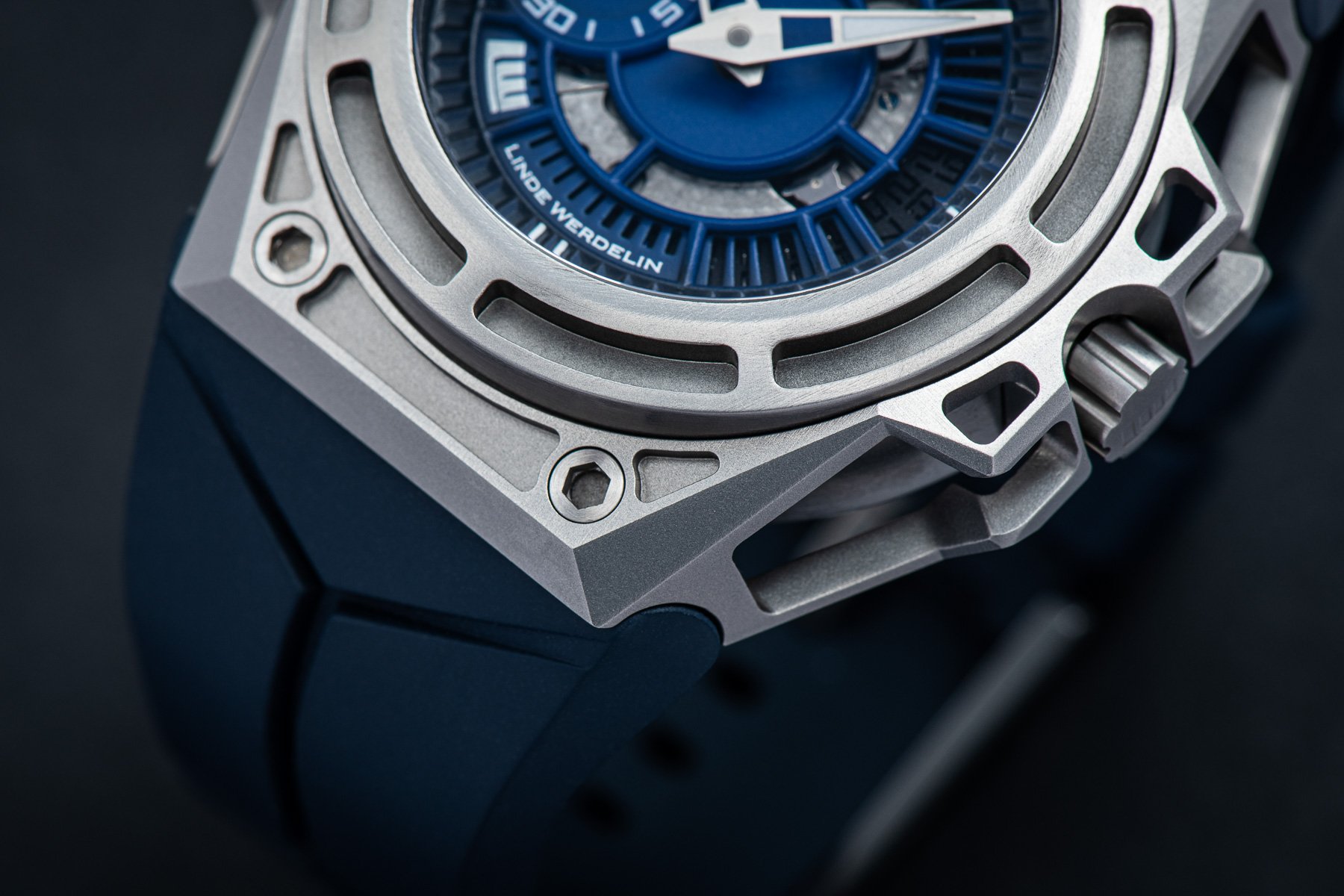 The two-part skeletonized black/blue fumé dial looks refined and minimalistic and, at the same time, keeps an industrial feel. It features a sub-dial for the running seconds at 9 o’clock. Diamond-cut galvanic-treated hands contrast very well with the darker background. The hands are also filled with ultramarine Super LumiNova. Because the dial is partly skeletonized, the fumé effect of the dia is also a lot less apparent. Or a lot more refined, as you will. When I saw the Spidolite Nord for the first time, I thought: “haven’t I seen a dark blue dial version of the Spidolite before?”.  I had to look it up, but the Spidolite Arktis Blue also features a dark blue dial and strap. After seeing the images of both, I must say that this new Spidolite Nord looks more lively at first glance, and it’s why I probably prefer it. 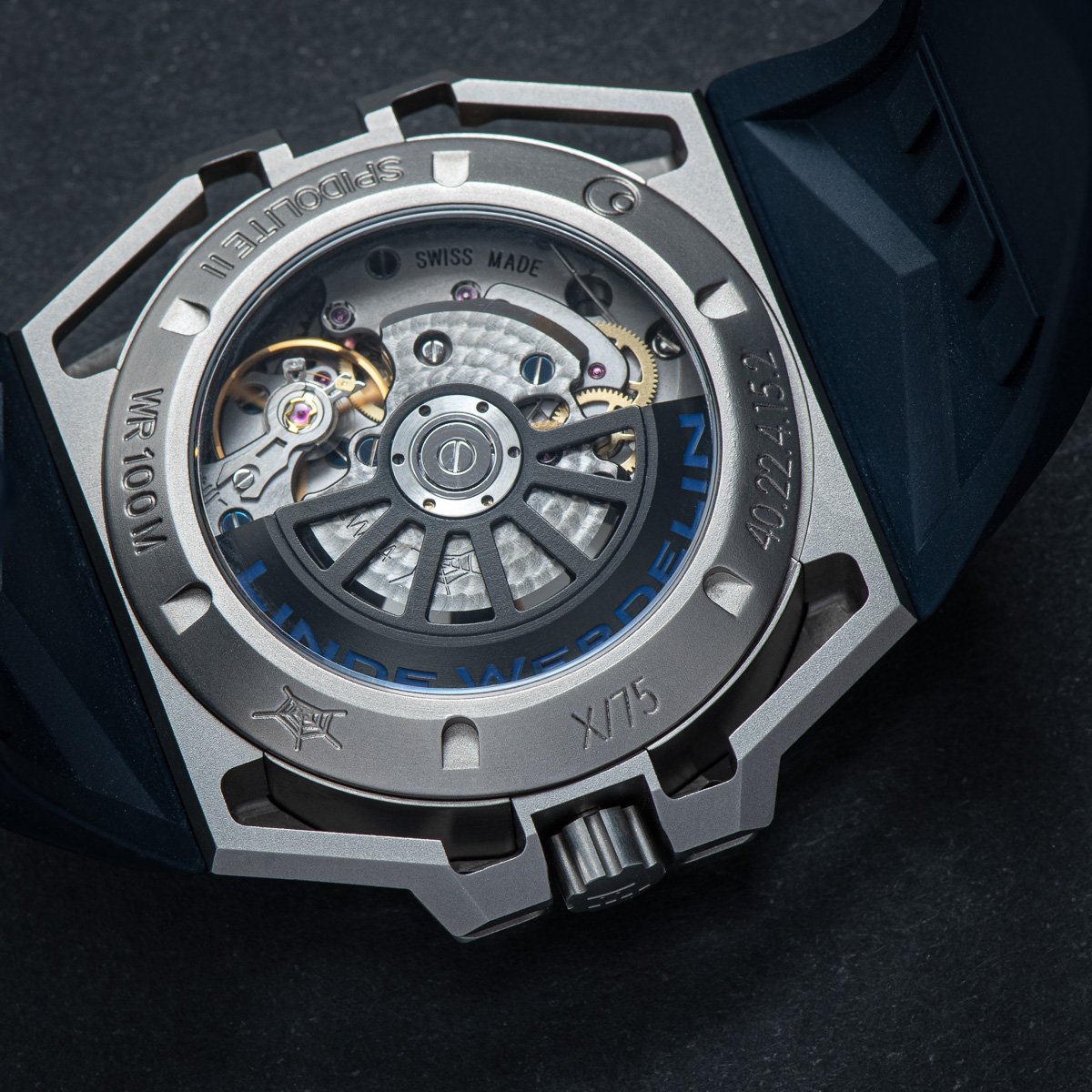 If you turn the watch around, you are greeted by the Linder Werdelin Caliber LW 04. The automatic movement custom-made for Linde Werdelin by Concepto is visible through the sapphire display case back. The movement operates at 28,800vph and features a 42-hour power reserve and a skeletonized oscillator with ceramic bearings for increased strength. The technical look and finish fit of the movement fit the overall style of the watch perfectly. The Spidolite Nord will be produced in a limited run of 75 pieces and costs £8,500 or around €9,940. 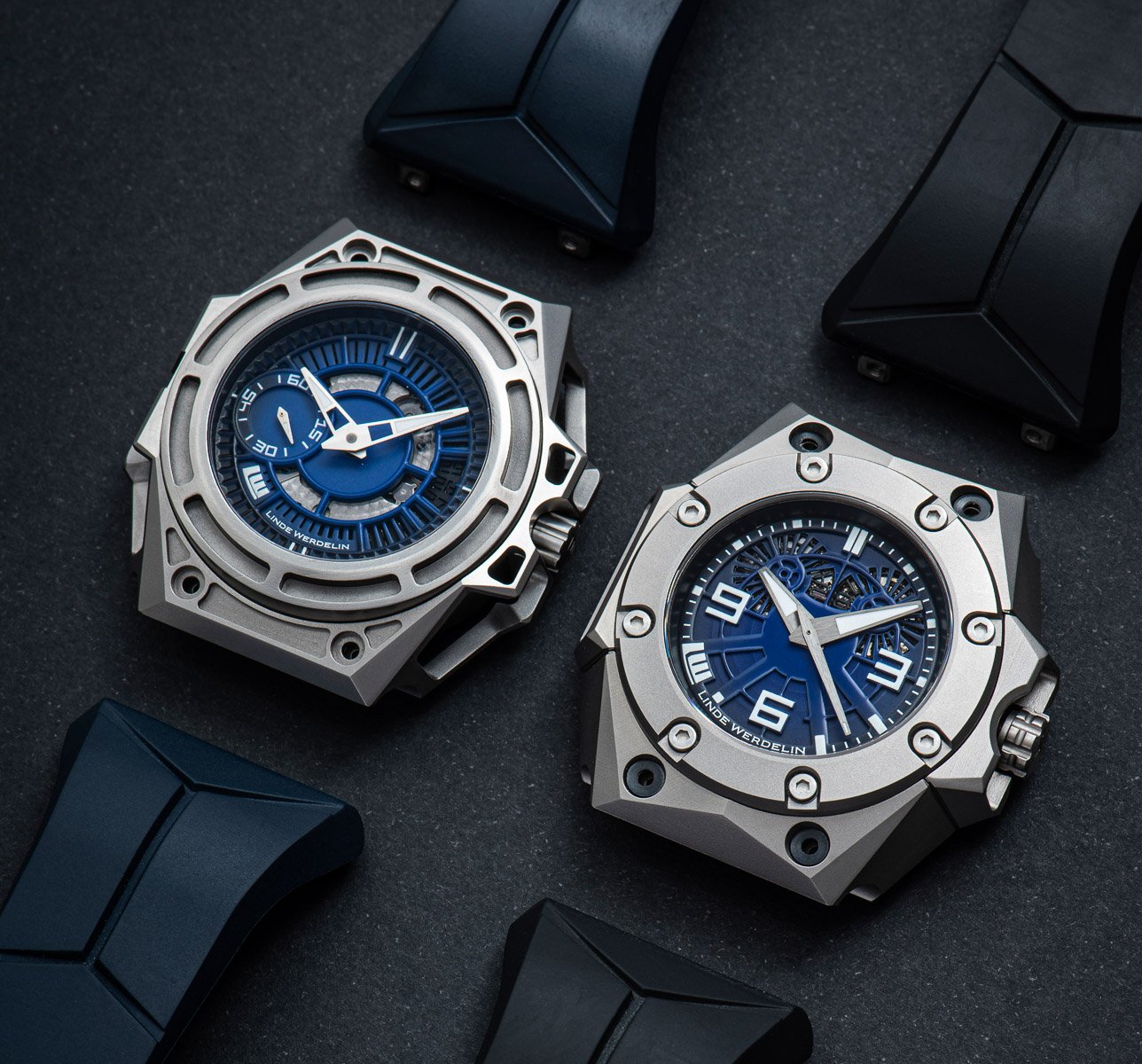 Seeing the new Oktopus Nord and Spidolite Nord together reminds me of the brilliantly designed watches that Linde Werdelin produces. What I love about the designs is that they originally came from a functional need. Often designs sparked by functional questions lead to amazing results because it’s more than just an exercise in shape. Especially with the Spidolite, this functional quest has resulted in a remarkable watch. Executed with the black/blue fumé Nord dial and blue rubber strap looks very nice. 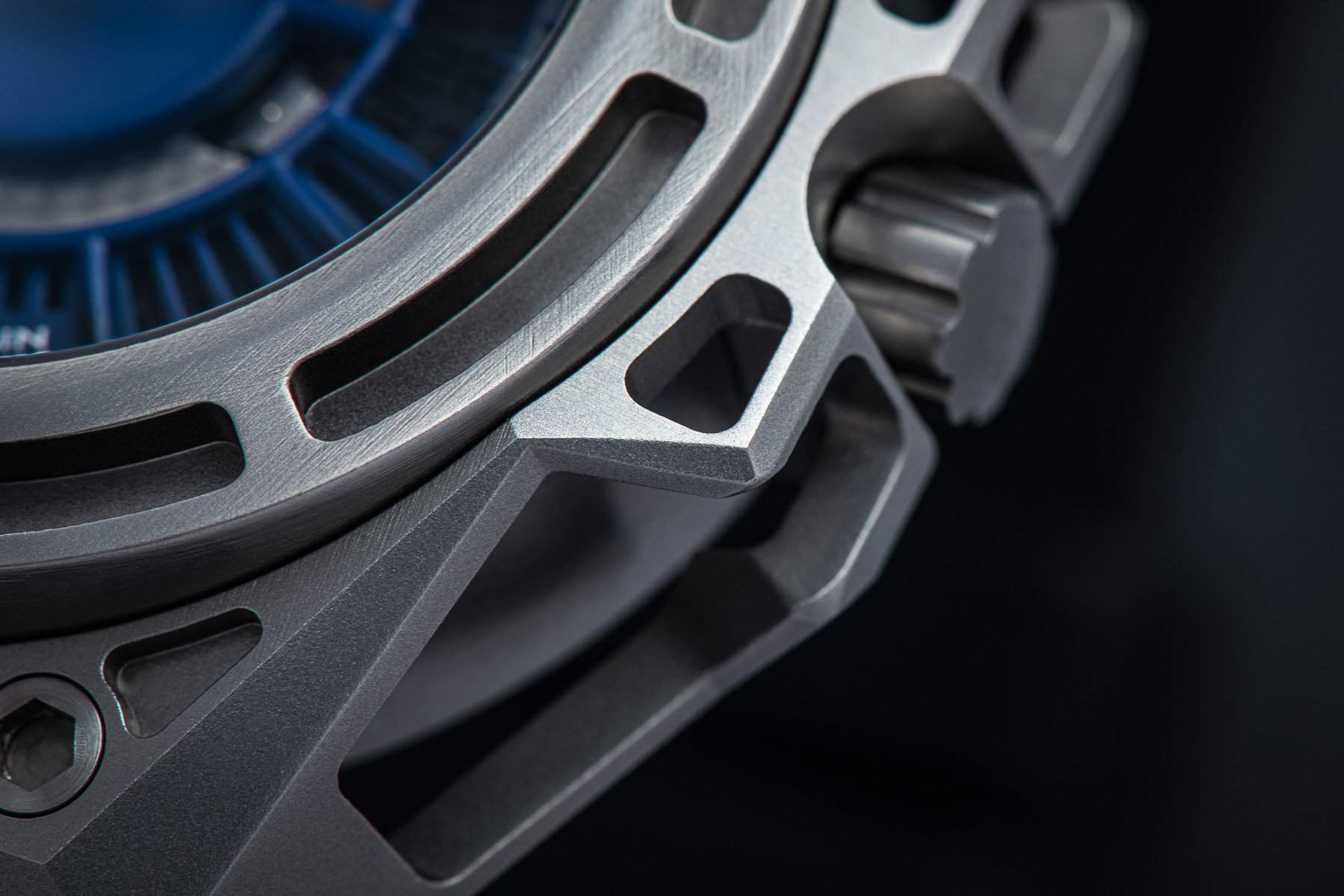 The Oktopus Nord is slightly more conventional, for lack of a better word, than the Spidolite. The case is still a stylish modern statement but slightly less futuristic than the Spidolite. Additionally, The dial is less minimalistic, and why it is a bit easier to navigate. But in the end, details will not decide which of the two is your favorite. They are both unique statements in their own right. 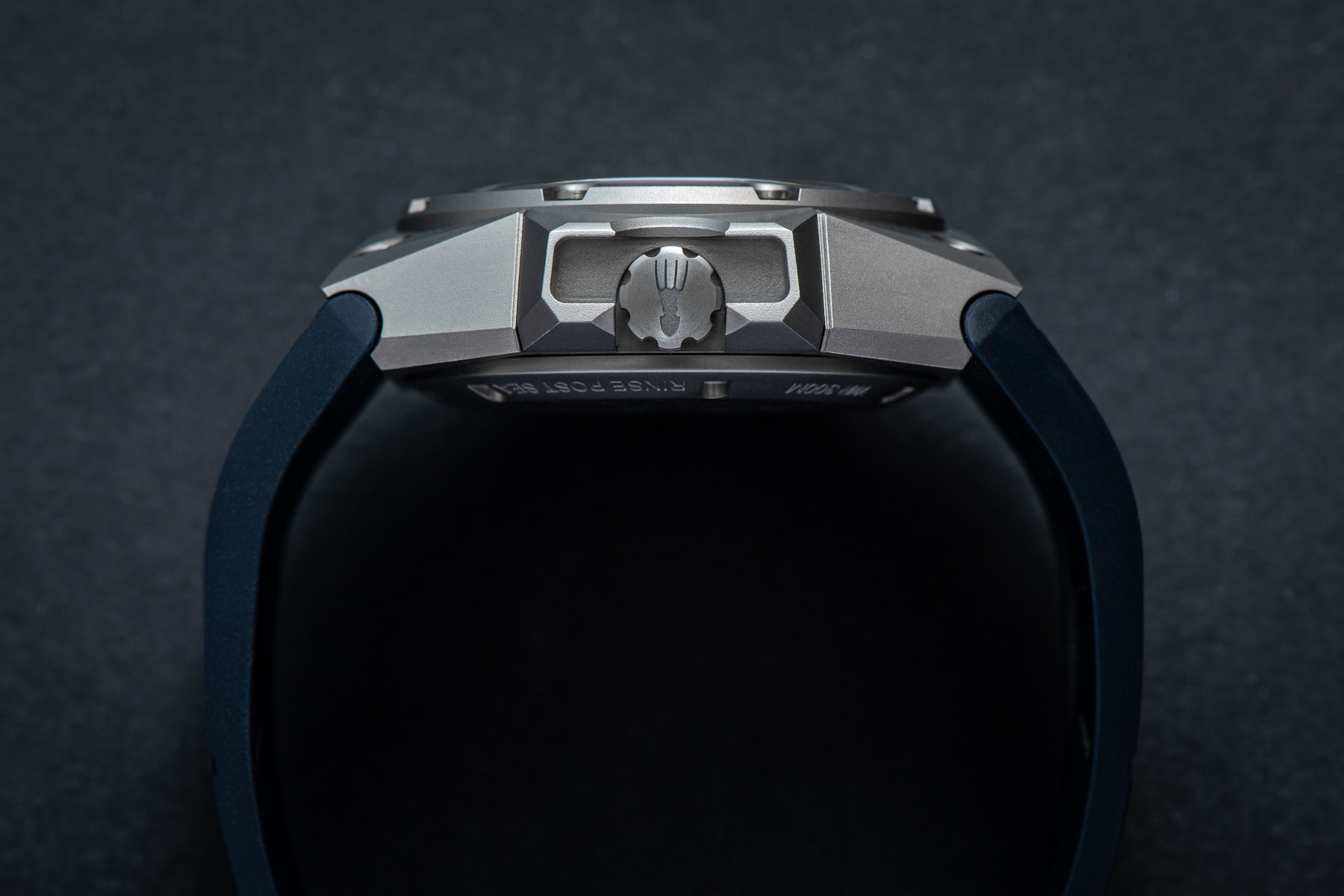 Seeing both the Spidolite Nord and the Oktopus Nord makes me want to see them side by side in the metal. The level of detail on both watches is incredible, and the special fumé dials add a welcome layer of refinement. So compliments to Linde Werdelin for creating a full Nord collection. They look amazing, and the North Sea-inspired colors add a personal touch that I love. It’s those small things that make a watch land in your heart.