Wow, this is all happening so fast. When we started the competition, we had 96 watches. Now we have started the end game! We are at the stage where our writers go head to head and hope to battle their way through to the final. At this point, each of our writers has only one watch remaining. So today, we have our very first quarter-final that sees Jorg and Balazs battle it out for a spot in our March Mania Final Four. We need your help to find out who will be one of the four final contenders. Where will your votes fall?

We’re at the sharp end now. Jorg has one watch left, as does Balazs. We need you to pick your favorite in this March Mania quarter-final. Tomorrow RJ and Gerard will have a go in the second quarter-final before Mike and Tomas step into the fray, followed finally by Ben and Bert. The Final Four stage commences this coming Monday so you’ve not got long to register your opinion. Go hard or go home. It’s time to leave it all on the court… 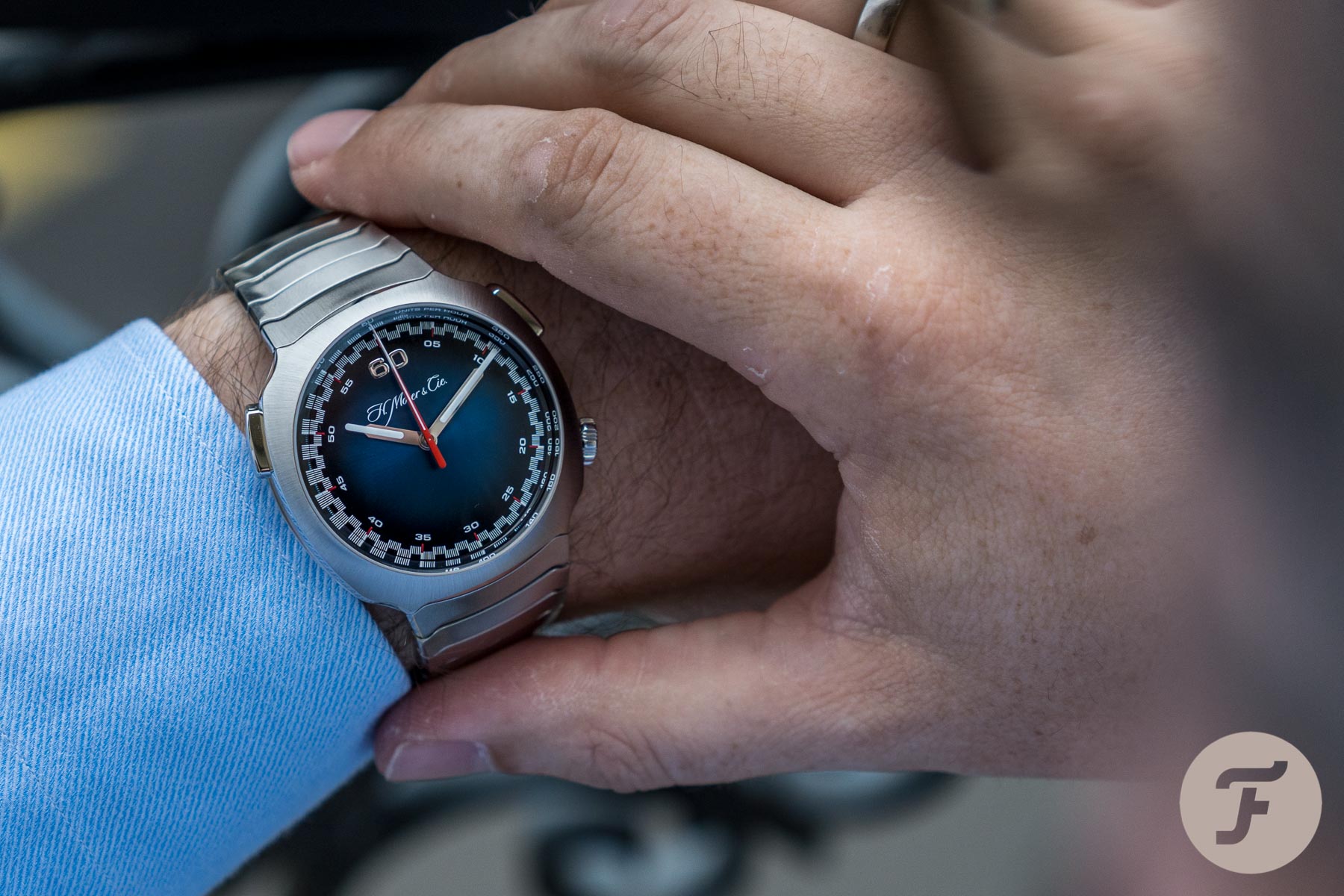 Jorg: So here we are Balazs! We hoped our favorites would make it to this stage, but it looked very unlikely that my beloved Czapek would make it past the Tudor for a while, there. And I have secretly hoped for the match-up that we have here today. I have to say that we couldn’t have asked for a better battle as these two watches are great timepieces that share a lot of common ground. Along with the Bvlgari Octo Finissimo, Rob has named this the modern trilogy of luxury steel sports watches. And who are we to disagree?

Balazs: When it comes to Rob’s statements I never disagree…anymore. Trust me, I’ve learned my lesson the hard way. But all jokes aside, this is a sweet pair indeed. I’m sad to see some of my other pieces go, but the Moser was my obvious winner and so was the Czapek in Jorg’s lineup. The luxury steel, sports watch craze that the Royal Oak started some 50 years ago (49 to be precise) is alive and well.

Jorg: Before we get down to the nitty-gritty, I have a bone to pick with you, Balazs. In my group stage, there were two watches that were my personal favorites out of the twelve. The first was the majestic  Breguet Marine Alarme Musicale 5547. And I was over the moon to see it perform very well in the preliminaries and make it into the first round. There the watch lost gracefully to the beautiful Glashütte Original Sixties Chronograph Annual Edition 2020. But to my surprise, you had the nerve to call the Breguet a monstrosity in the Instagram Live session you did with Rob. Breguet and I are keeping scores here Balazs and this will not be easily forgotten. 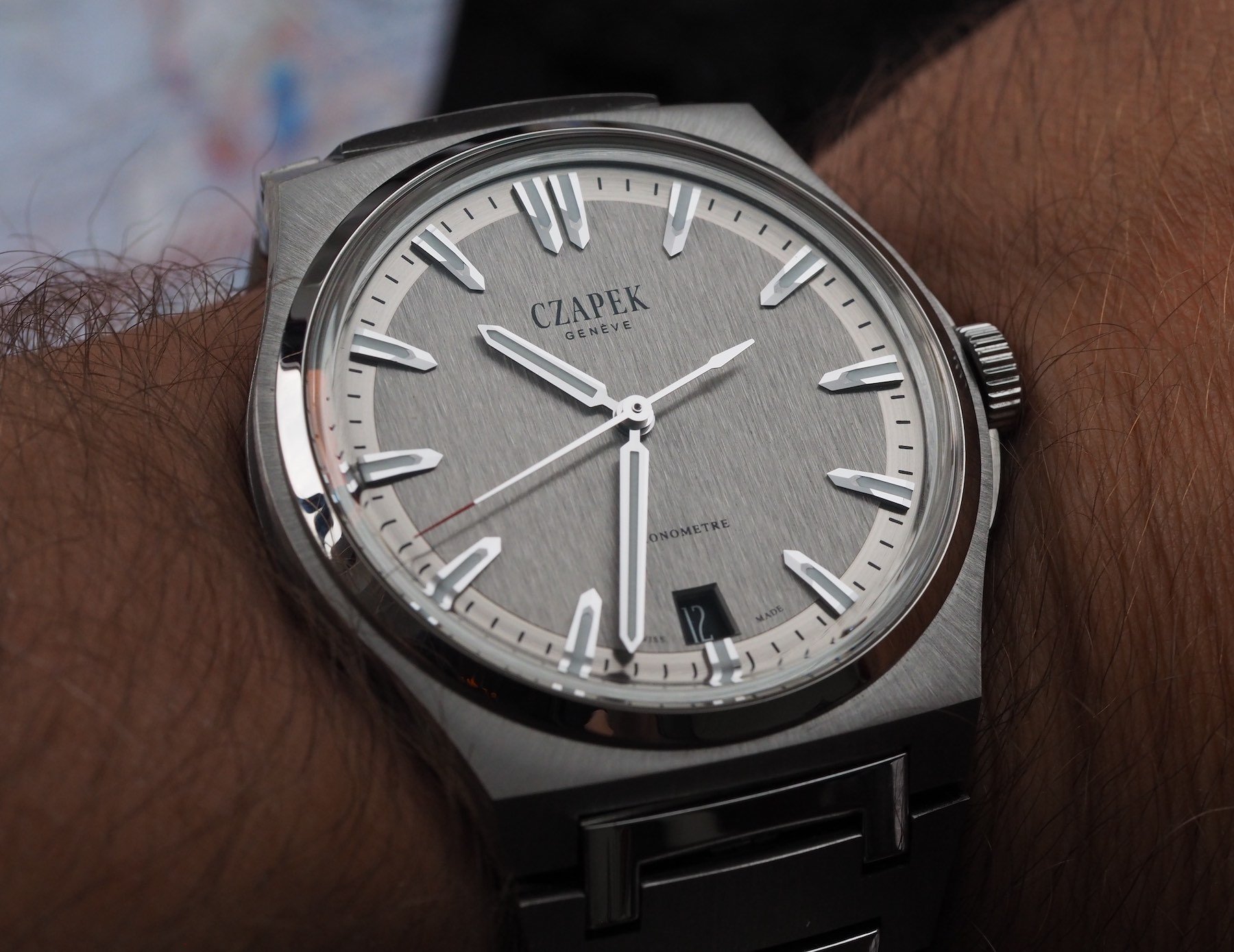 Balazs: I knew this would come back and bite me in the backside. Still, I have to stand behind my statement. That Breguet, magnificent as it may seem, is not my cup of tea. Granted, I love Breguet as a brand and I firmly believe that it represents the pinnacle of watchmaking. The history and craftsmanship that went into that timepiece alone make me want to love it but I just can’t. So, just as I told Rob in the Live, I have to join Team Glashüte on this one. Sorry, Poppa Jay.

Jorg: The second favorite in my group was the Czapek Antarctique Terre Adélie. As Rob said it deserved to topple the Tudor Black Bay 58. And it did. But no thanks to you…again! While I love the Tudor and all it brings to the table, it is no competition for the brilliance of the design, the finishing, and the movement of the Czapek Antarctique Terre Adélie. And for a moment there, my gut-feeling was that you might have voted for the Tudor because you wanted to avoid a showdown with the Czapek. Did you B.?

Balazs: Ha. I’m not that non-confrontational and you know it. Truth be told, I love the Czapek but at first glance, I find the design boring. Something you cannot say about the Tudor or my Moser for that matter. Yes, the Czapek is a marvelous timepiece and incomparable to the Tudor to many, but I love blue so when I saw the 58 my mouse instantly started to however over its name in the poll. And speaking of blue, have you seen that breathtakingly beautiful Moser Streamliner Flyback dial? A thing of beauty with a ton of character. 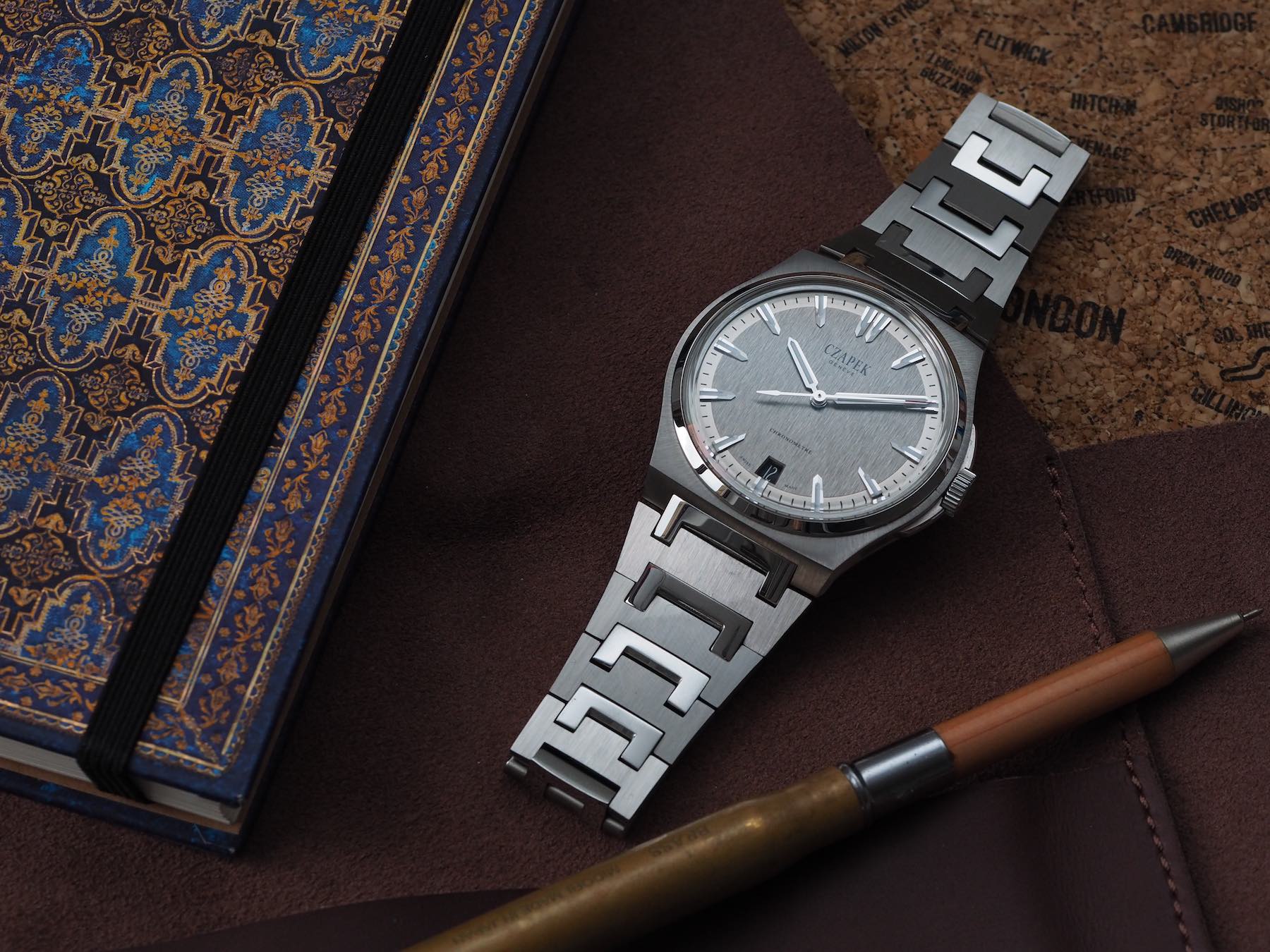 That blue dial is an absolute peach, I fully agree Balazs. Let me start off by saying that both of our contenders are amazing timepieces. But out of the two, the Czapek Antarctique Terre Adélie is without a doubt the best for me. The design is a refined mixture of recognizable influences from the past and the modern sophistication of the current age. The case design is elegant and simple with a brilliant brushed finish, only interrupted by the polished bezel. The hand-finished dial has a great level of depth and is the perfect canvas for the exquisitely finished large applied hour markers and the beautifully shaped hands that hover above it. A small splash of color comes in the form of the red tip of the seconds hand. It’s exactly enough to stand out for a split-second before gently integrating into the overall design.

On the subject of integration, the unique design of the integrated bracelet proves to be a stand-out feature in both aesthetics and comfort. It makes the Antarctique Terre Adélie a joy to wear and to look at. And if you turn the watch around you are greeted by the in-house developed SXH5.01 automatic caliber. A movement characterized by its gold micro-rotor and seven spectacular bridges of which five are open-worked so you get a chance to enjoy the movement at work in all its glory.

The end result is a clash of design that feels remarkably fresh and at the same time comfortably familiar. And to be honest I miss that comfortable feeling with the Moser & Cie. Streamliner. Great design preferably makes you feel a bit uncomfortable and then you find that click because everything falls into place. But the uncomfortable feeling has never left with the Flyback Chronograph. The design of the Flyback Chronograph feels stuck in the late sixties/early seventies. It’s like a re-issue of a watch that was never released. While I love a lot about the Flyback Chronograph — that movement is a work of art — stylistically I can’t shake this feeling of Barbarella calling from 1968, asking for her watch back.

Rob: You deserve a gold medal for that last paragraph alone. Shots fired…

Jorg: I much prefer the design of the Czapek Antarctique Terre Adélie over the Moser & Cie. Flyback Chronograph. After an initial uncomfortable thought: “Is this a 1970s German design?” every piece of the puzzle quickly fell into place. Add the immaculate finishing that is up to the highest standard in watchmaking and the spectacular in-house developed movement and I can very well imagine how nervous this showdown might have made you. But it’s too late now. The Czapek Antarctique Terre Adélie came here to win and the H. Moser & Cie. Streamliner is the next hurdle on the way to everlasting glory in our March Mania contest. 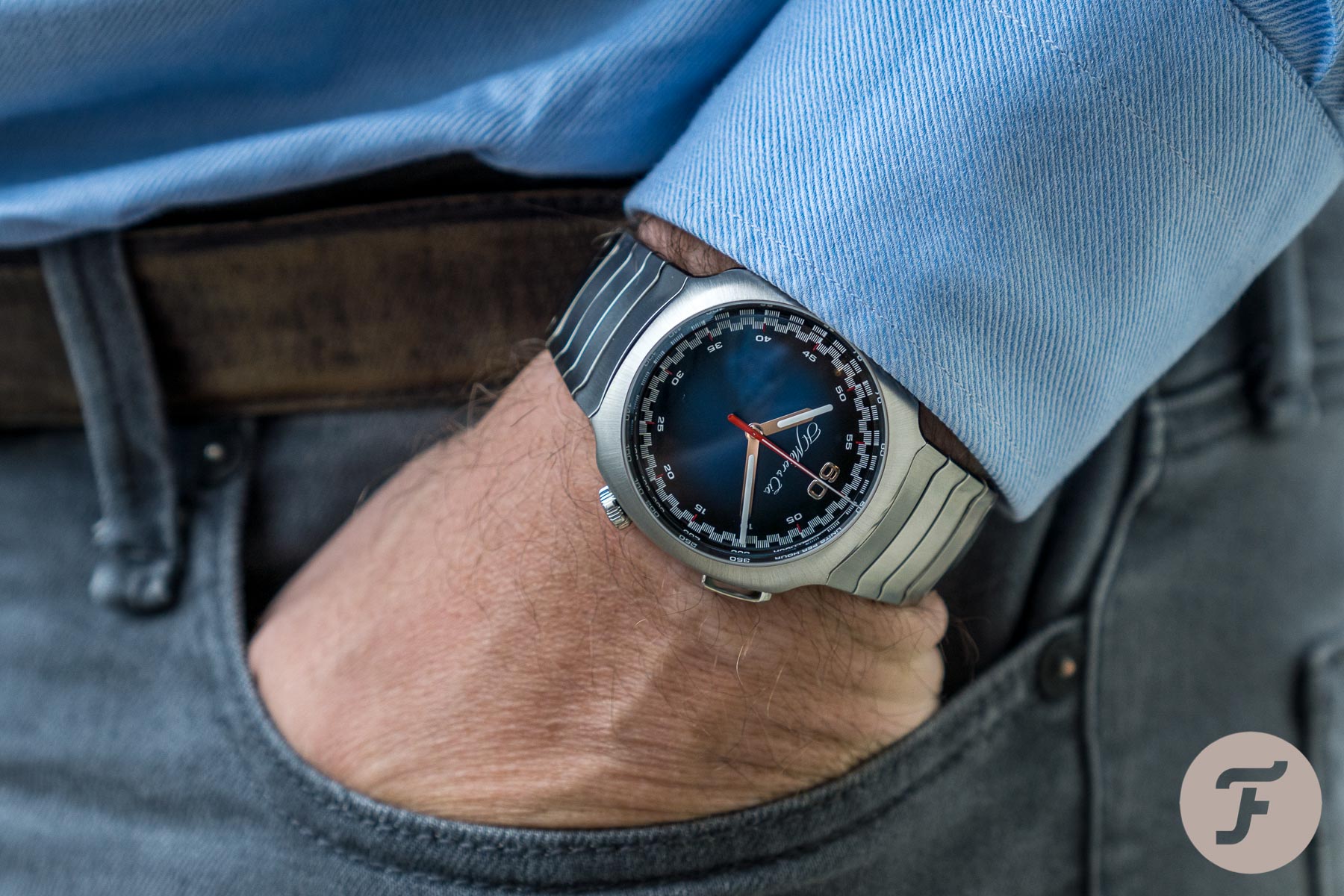 No surprises to see the Streamliner steaming into the Sweet Sixteen. I think it would have been madness to send the H. Moser & Cie. Streamliner Flyback Chronograph home in the last round even though I very openly lobbied for just that. What? You know I’m nuts. It’s hardly a secret. But talking of secrets, how about the “best-kept one” the Moser has to knock off to set-up a likely dual with the Czapek? That’s right, the plucky third seed from Omega outlasted the wasabi-dialed Oris to make it through to the third round. This is, much like the above battle, fisticuffs twixt a daily hero and an occasional superstar. Where does your vote go, I wonder?

How can something look vintage and ultra-modern at the same time without being corny? Well, scroll a bit down and feast your eyes on that photo. That’s how. As I mentioned in one of our previous IG Lives, the H. Moser & Cie. Streamliner Flyback Chronograph looks nothing like the Moser watches we learned to love. Yet, for some strange, unexplainable reason it looks exactly how I’d imagined a Moser neo-vintage chronographs would look like. I could write a whole paragraph just about that mind-blowing integrated bracelet. Still, if we stay with the watch head and look at those subtle details we forget about the integrated bracelet and get lost in the perfection of the hands or the depth of the fumé dial. 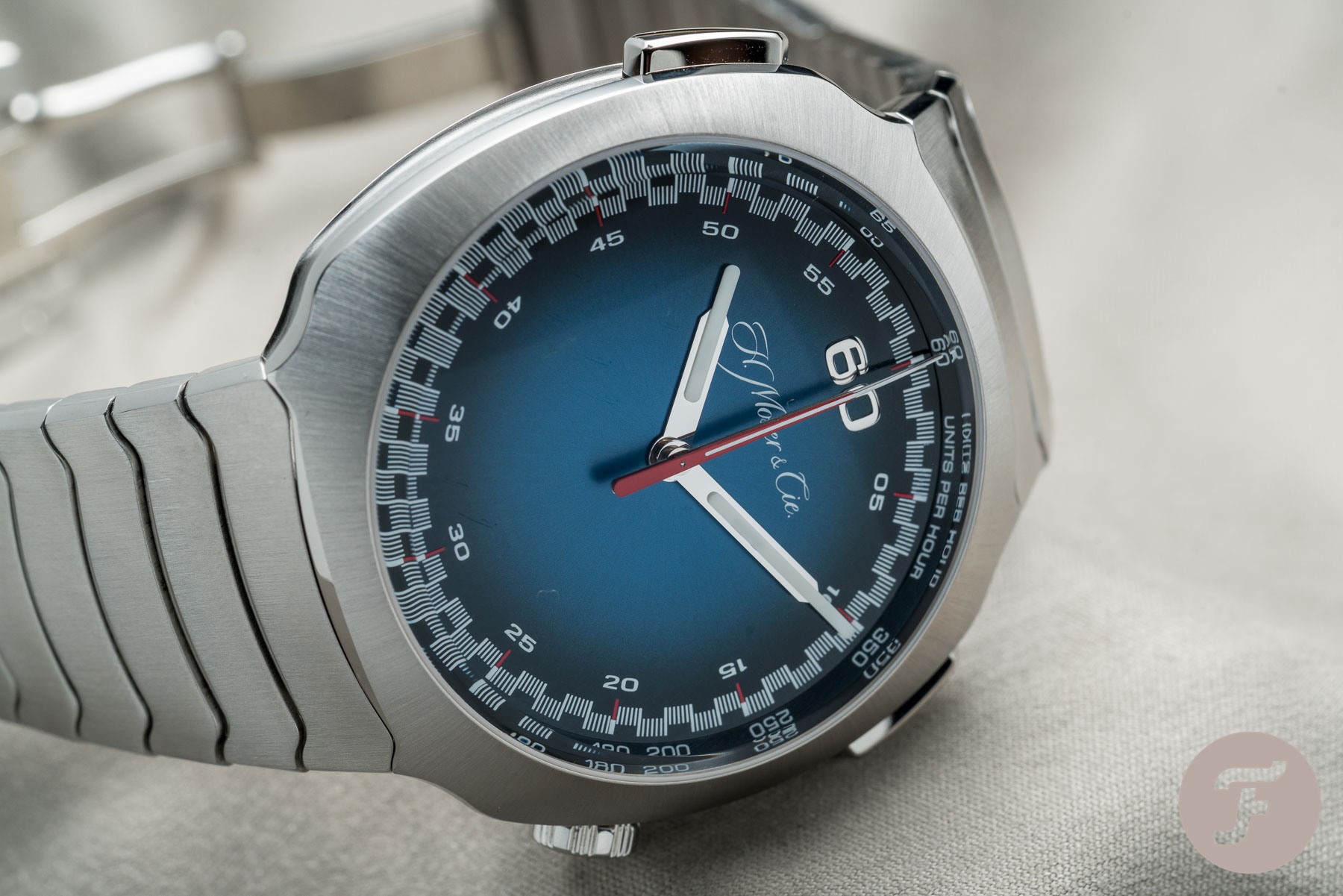 The design of that Czapek is so unique that the designers from Rolex hopped in their time machine in the early 1970s, came to the future, copied it, then traveled back in time and created the Oysterquartz. The H. Moser & Cie. Streamliner on the other hand has a bracelet integration you have not seen before. No, it does not look like the Omega Speedsonic Lobster, at all. This bracelet is much more complex than that. Just take a look at its finishing.  When you’re done with that, flip the watch and glance over the display back.  The Agenhor mechanical flyback movement will blow your mind.

Both the Czapek and the Moser are exceptionally well-made timepieces, no question about that. Yet, to win this contest the watch has to offer more than fine craftsmanship. In an ideal situation, the piece should possess something that the others lack. Call it charisma, pizzazz, or the “it” factor. In my humble opinion, the H. Moser & Cie. Streamliner is the watch with that. There’s no shame in being second, especially not in this contest, so please don’t feel sorry for the Czapek. The watch could’ve done so much more in our March Mania contest. Sadly, it had to be paired up with the Moser, and look what happened.