It’s always a good day when something new and exciting drops into our inbox from the team over at MB&F. After it finally revealed HM10 Panda for Only Watch on Monday (check out our article about the HM10 Panda right here!), today, the Swiss masters of the eccentric have announced another Pièce Unique that is going to auction, all in the name of charity: the MB&F Legacy Machine 1 “Longhorn”.

The interestingly named watch is a special version of the brand’s iconic Legacy Machine 1, built to celebrate the 10th anniversary of the LM1. There’s a twist, though. The Longhorn is based on one of the very first prototypes developed a decade ago, when the LM1 first came to life. Pretty cool, huh?

The celebratory prototype concept isn’t brand new to MB&F. In 2020, the brand developed the HM4 Kittyhawk to mark the 10th anniversary of the HM4 collection. This elusive piece was sold to one of the brand’s passionate collectors in a private sale. However, with the anniversary of the LM1, MB&F saw the opportunity to do something different and give its fans and collectors worldwide a fairer chance to own this exceptional watch, all in the name of charity. On Sunday, November 7th, Phillips in Association with Bacs & Russo will auction off the LM1 “Longhorn” Prototype, with a significant portion of the proceeds going to Save the Rhino International. 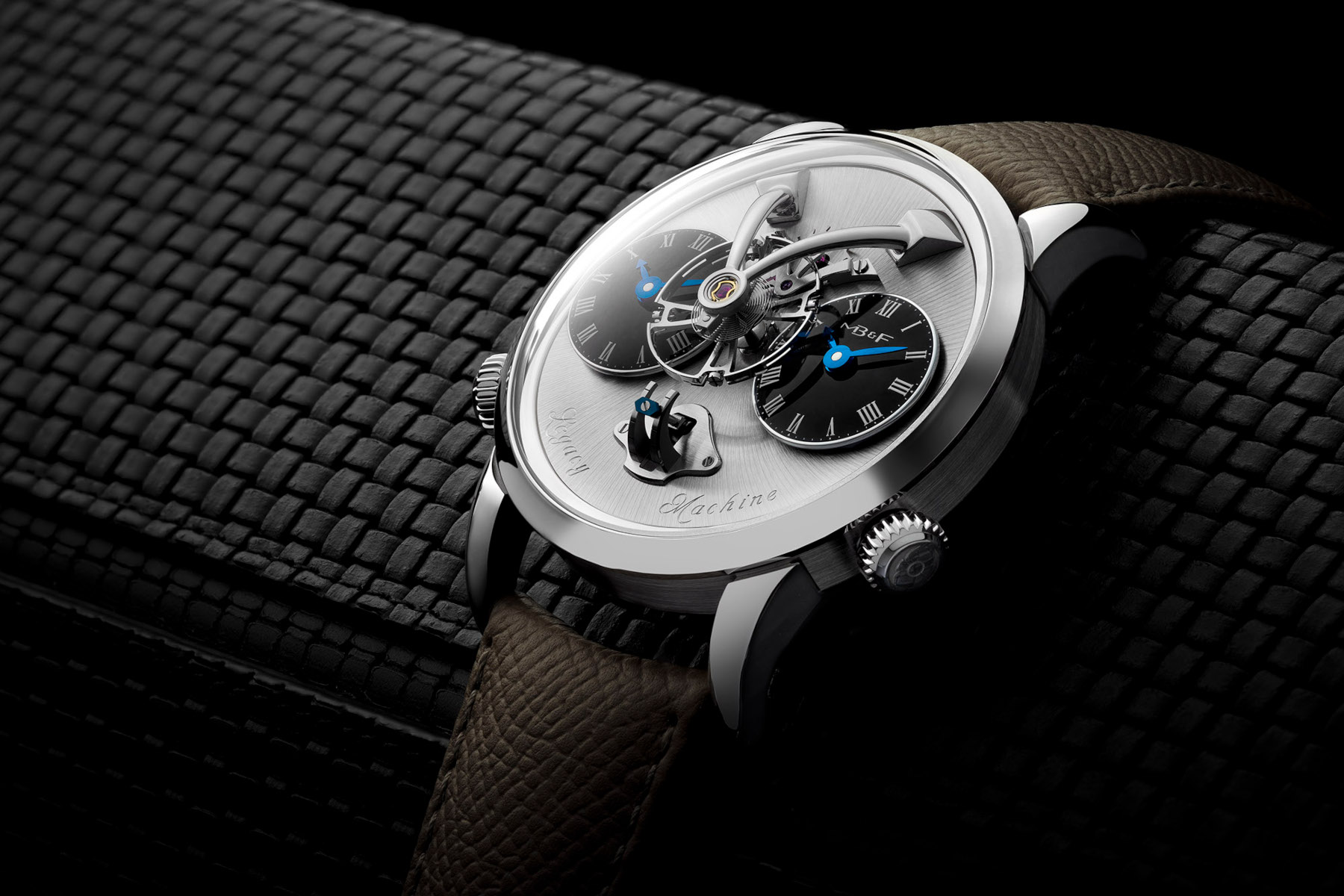 You may be wondering about the name “Longhorn”. Well, it refers to the long lugs, also called horns. MB&F explored the idea of using long horn-shaped lugs during the initial design phase back in 2009; however, it caused some problems for the strap placement. How so? The team couldn’t agree on the placement of the spring bar holes. Such a seemingly benign factor caused the MB&F design team to lose countless nights’ sleep. Should they be close to the case or positioned towards the tip of the lug? Depending on the size of the wearer’s wrist, both options could lead to a poor fit. There was no single position that covered all bases. In the end, MB&F opted for the path of least resistance and went with shorter lugs instead of the long horn-shaped ones, negating the issue. 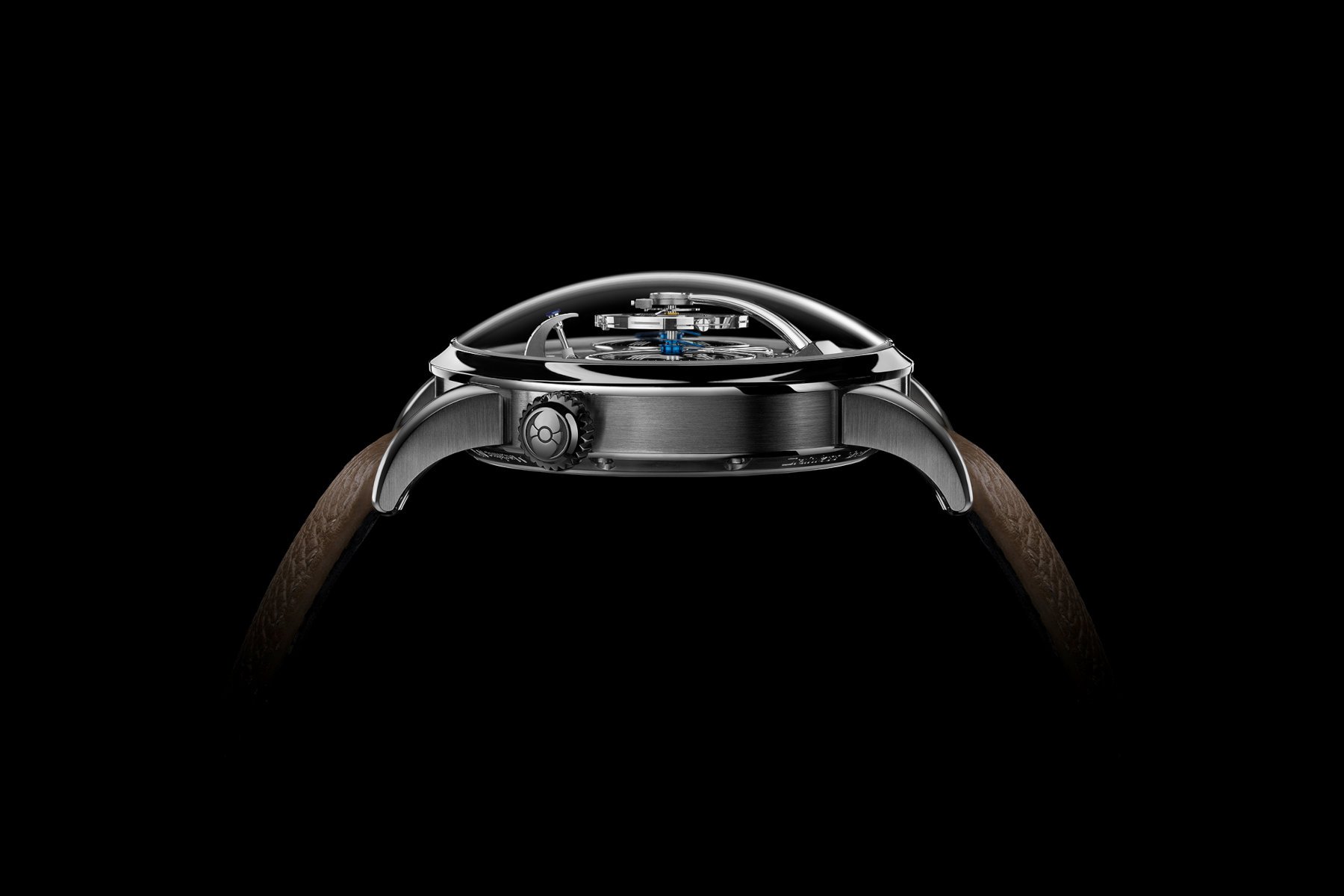 A dream that wouldn’t die

That said, as I’m sure any other creative can attest to, the dream of the longer horns was always at the back of Max Büsser’s mind. It was a concept that wouldn’t allow itself to be put to bed. He explains: “During one of our recent brainstorming sessions, I suddenly had the idea to drill two holes in the long horn for the spring bar – one hole at the tip of the horn and the other closer to the case – and then let the customer decide. I don’t know why I didn’t think of this 10 years ago!”. Sometimes it’s so easy to overthink things and look for a single solution. Still, in this case, the actual path of least resistance was “both”! 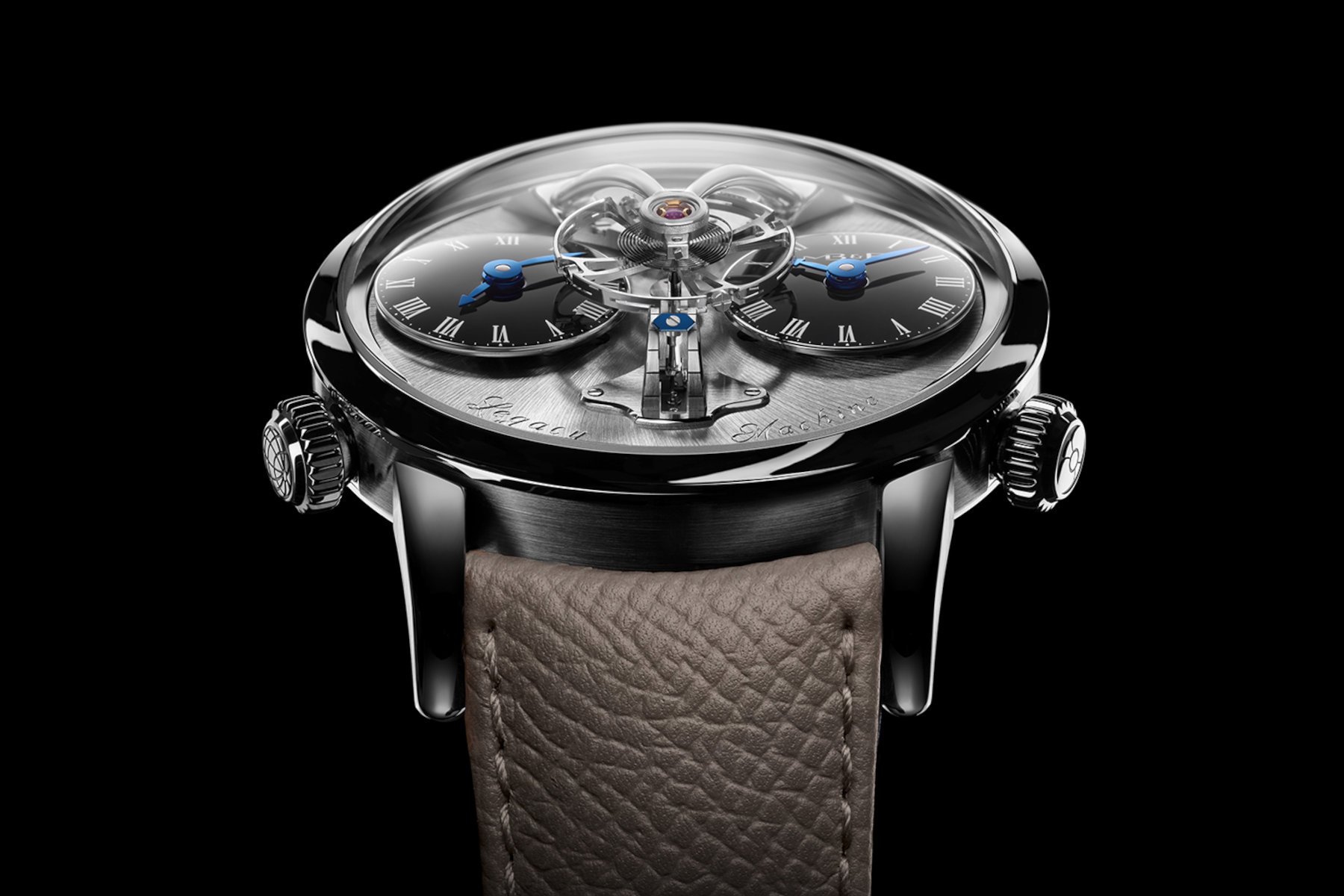 Aside from the lugs, there’ more to the LM1 Longhorn than meets the eye. Lugs alone do not maketh a watch! The LM1 Longhorn prototype features a stainless steel case, which departs from the “regular” LM1 models. Pretty much all of the regular production models used other metals for the cases: white or red gold, platinum, and titanium. The only other LM1 models to use stainless steel for the case were the 18 “Final Edition” models released in 2017.

But wait, there’s more! Traditionally, the LM1 featured glossy white lacquered sub-dials. For the LM1 “Longhorn”, however, the sub-dials are shiny and black. A first and a last for the Legacy Machine 1 series! A final tweak is a redesign to the signature flying balance wheel, which has a smooth and organic shape, almost reminiscent of horns themselves. A subtle yet wholly appropriate update. 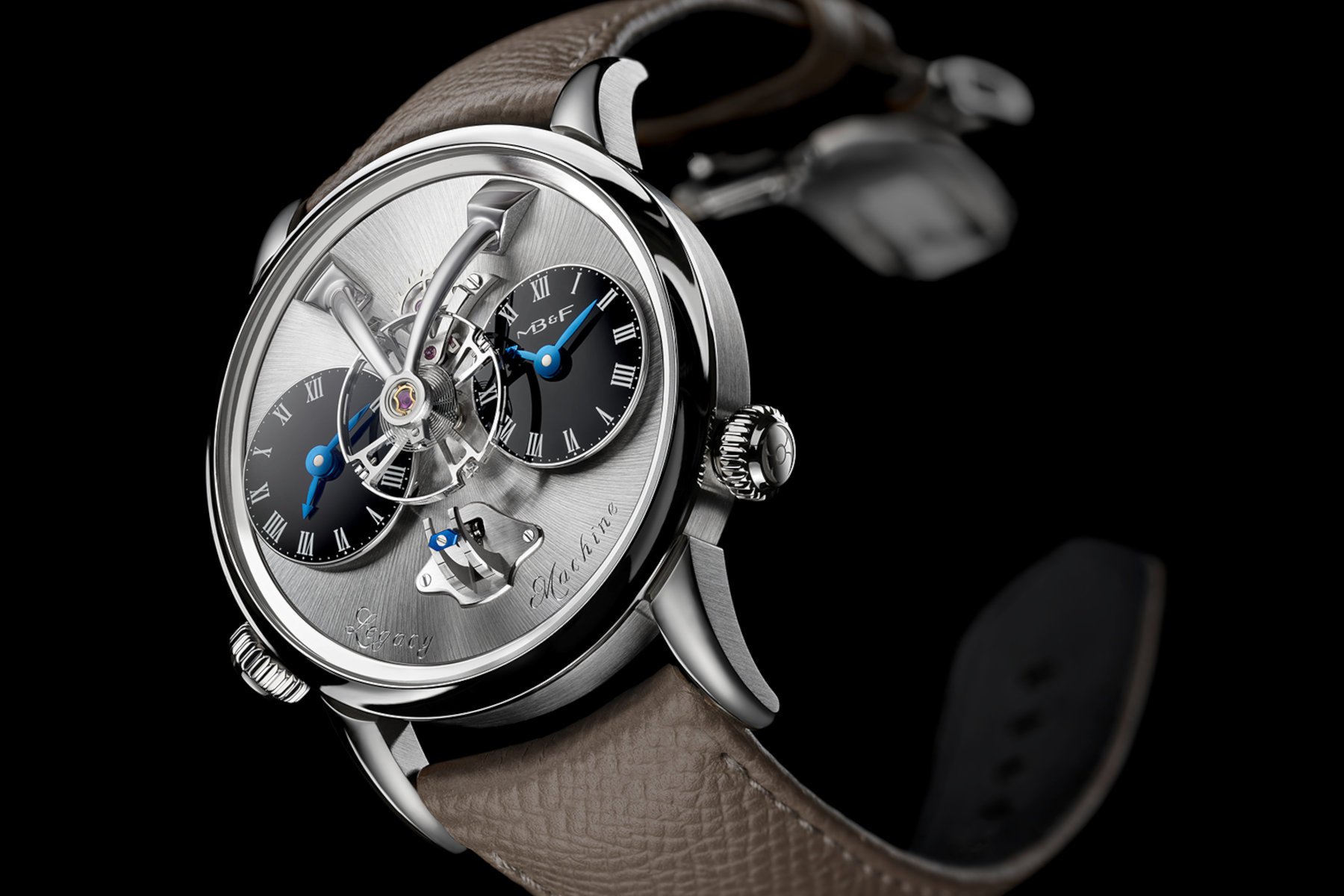 So, where did the rhinoceros connection come from?

This one is actually a little simpler than you might think. Obviously, MB&F decided it wanted to ensure the one-off LM1 “Longhorn” Prototype benefitted a charitable cause; that much was given, but which charity should it benefit? Well, rather naturally, the idea came from the long, horn-shaped lugs bearing a resemblance to the long horn of a certain land mammal. Yep, you guessed it; the rhino. MB&F selected Save the Rhino International (UK Registered Charity Number: 1035072), a London-based organization striving to protect all five species of rhinoceros in Africa and Asia. By stopping poaching and habitat loss, Save the Rhino International aims to take rhinos off the Critically Endangered species list. 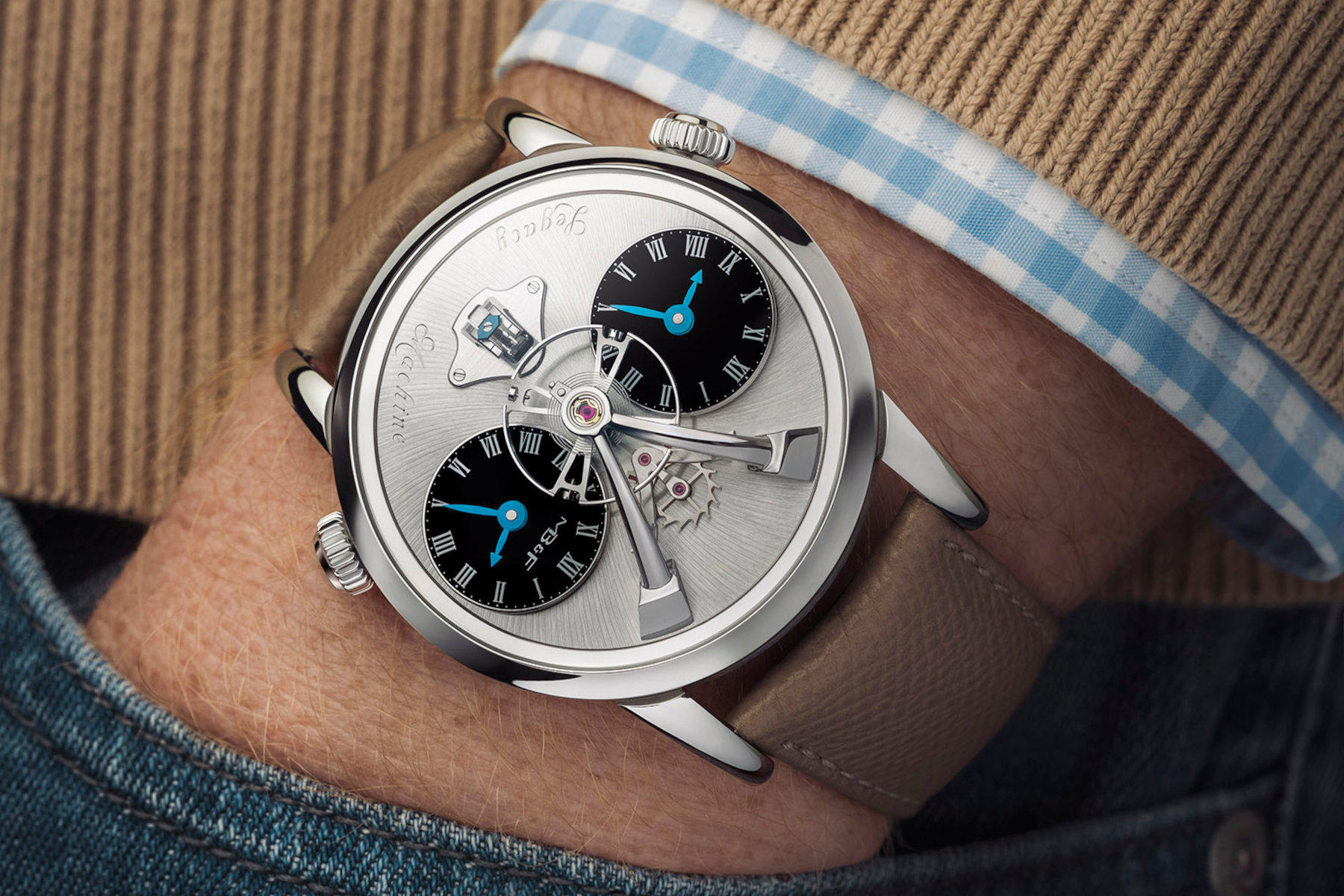 The Longhorn will be a hit

Personally, I like the tie-in, even those it might be classed as “tenuous” by some. What’s not to like here? A stunning watch that enabled MB&F to finally solve a problem that’d been niggling away at the design team for over a decade, and a charity dedicated to the conservation of the majestic rhinoceros getting a helping hand. It’s all gravy in my books…

The MB&F Legacy Machine 1 “Longhorn” Prototype will be auctioned by Phillips in Association with Bacs & Russo on Sunday, November 7th, 2021. You can find out more info about Save The Rhino here.