When you think about MB&F, “sporty” and “wearable” certainly aren’t the first words that come to mind. The watches that the brand usually presents to the world are pieces of art on the wrist. They take on the most unusual shapes and forms, integrating some of the most advanced movements into amazing cases. And while these qualities carry over into Legacy Machines (LM) line, the watches in this collection are certainly a bit closer to the round-wristwatch archetype. Today, MB&F is adding two Split Escapement EVO models to the LM collection. And yes, the EVO line is indeed MB&F’s more sporty and wearable line of watches. Let’s take a look.

Up until now, the MB&F EVO collection basically consisted of two incredibly complex watches. First, there was the Perpetual EVO, the brand’s sporty version of a perpetual calendar. I think Thor is still recovering from the fact that it came on a rubber strap. MB&F then introduced the Sequential EVO, the brand’s first-ever chronograph, only a few months ago. That watch also comes on a rubber strap, just like today’s releases, accentuating the sporty and more wearable character of the EVO line. But the Legacy Machine Split Escapement EVO we’re talking about today isn’t actually a completely new watch. 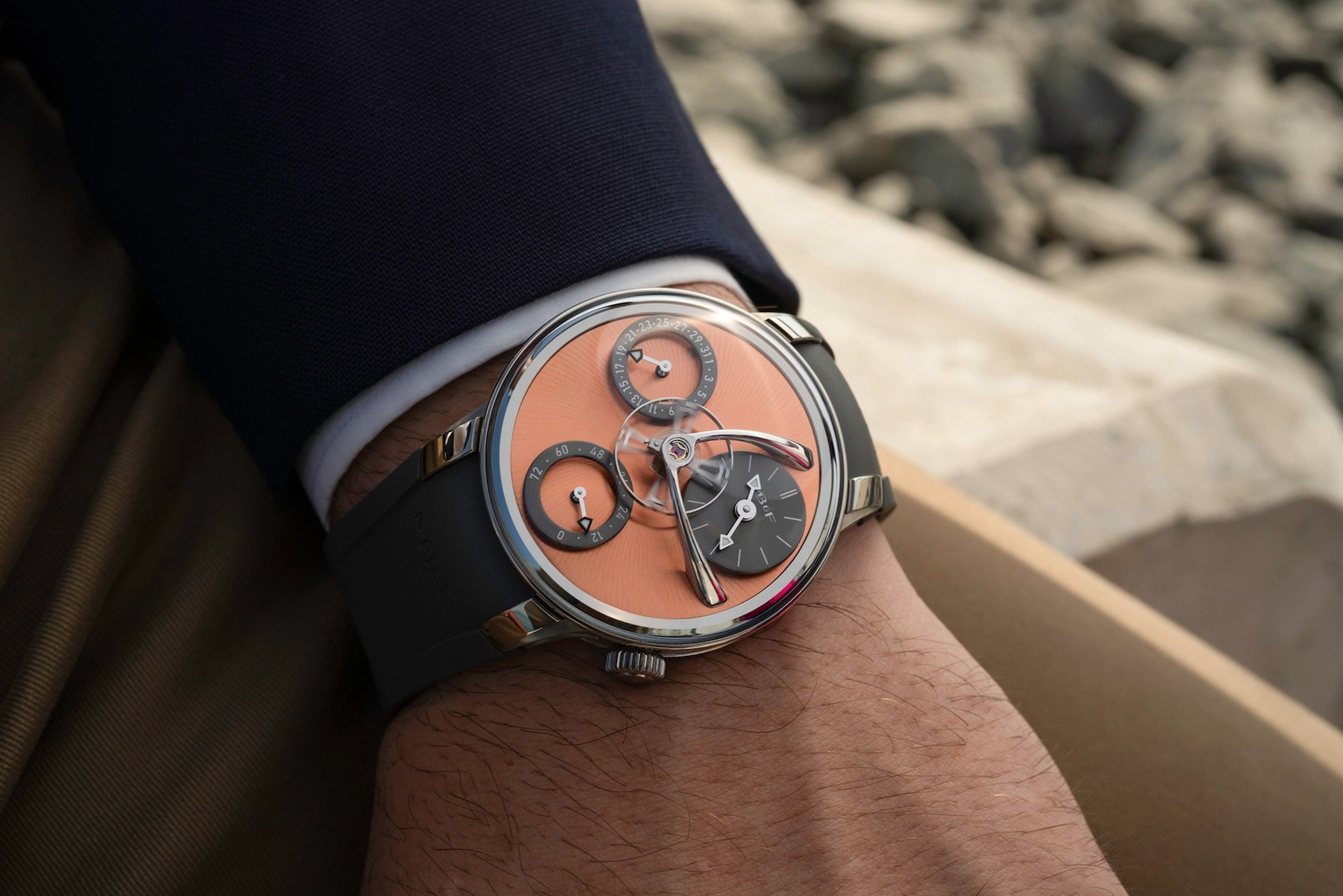 In December of last year, MB&F launched a 10-piece limited edition of the Split Escapement EVO. The watch honored the 50-year jubilee of the United Arab Emirates and came with a salmon-colored dial. The two watches that MB&F is releasing today are identical in construction, with only their color configurations differing from last year’s Split Escapement EVO. But before we take a closer look at these new versions, let me first explain where the name comes from.

MB&F first used this split escapement in the LM Perpetual from 2015. Watchmaker Stephen McDonnell had found a way to display both the balance wheel and the perpetual calendar on the dial side. He did so by separating (splitting) the escapement from the balance wheel by using the world’s longest balance staff. This way, the balance wheel could be on display and the anchor and the escape wheel could do their job backstage. But because of the complexity of the LM Perpetual, the split escapement didn’t really get the attention it deserved. In order to properly highlight this innovation, MB&F introduced the Legacy Machines Split Escapement watch in 2017. 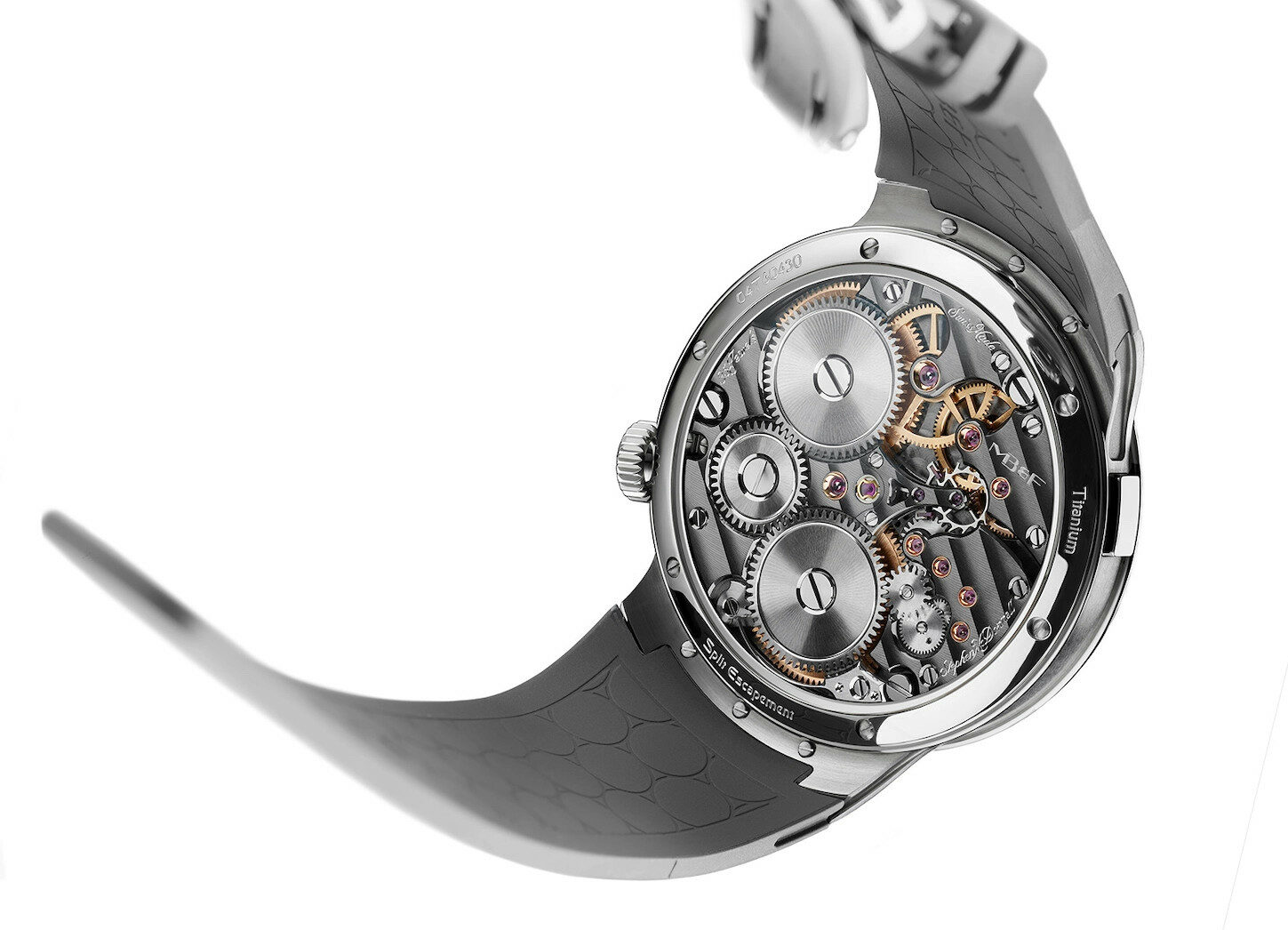 The EVO version of the Split Escapement watch houses the same manually wound 298-component movement. Two barrels provide a power reserve of 72 hours, which, besides the time and the date, is shown on one of the sub-dials. The date, which is operated through a button on the side of the case, is, as MB&F says, foolproof. No matter the time at which the wearer adjusts the date, doing so will not and cannot damage the movement.

As I said, the EVO collection is MB&F’s more sporty collection. That’s why the movement is housed in titanium. This 44mm case, in addition to comfort and robustness, also offers 80 meters of water resistance. This is thanks in part to the addition of a screw-down crown. But Max Büsser and his friends went even further to make wearing the LM Split Escapement EVO even more carefree. Inside the case, the movement is held by a new monobloc shock-absorbing “FlexRing” system. This will absorb both vertical and horizontal shocks caused by any abrupt movement or impact.

I mentioned that MB&F is introducing two new versions of the LM Split Escapement EVO today. One is limited, and the other is not. 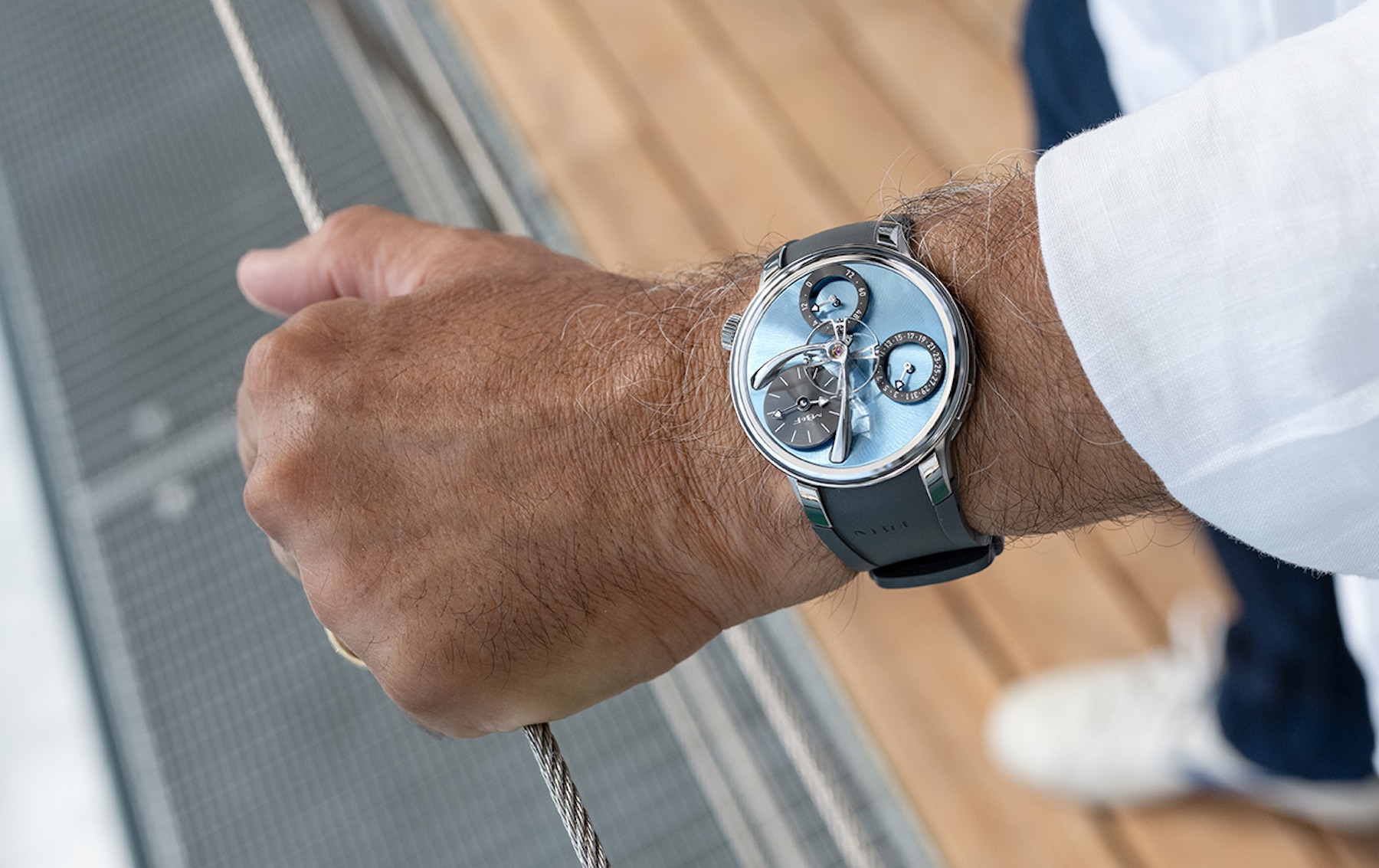 Let’s start with the non-limited version, which has an icy-blue base plate and dark gray sub-dials. But since the movement is as interesting to look at as the dial, MB&F has also paid special attention to its finishing. The majority has been darkened and the moving wheels are finished in rose gold to increase the contrast and the more sporty character of the watch. The back of the limited-edition version looks identical to the non-limited one. 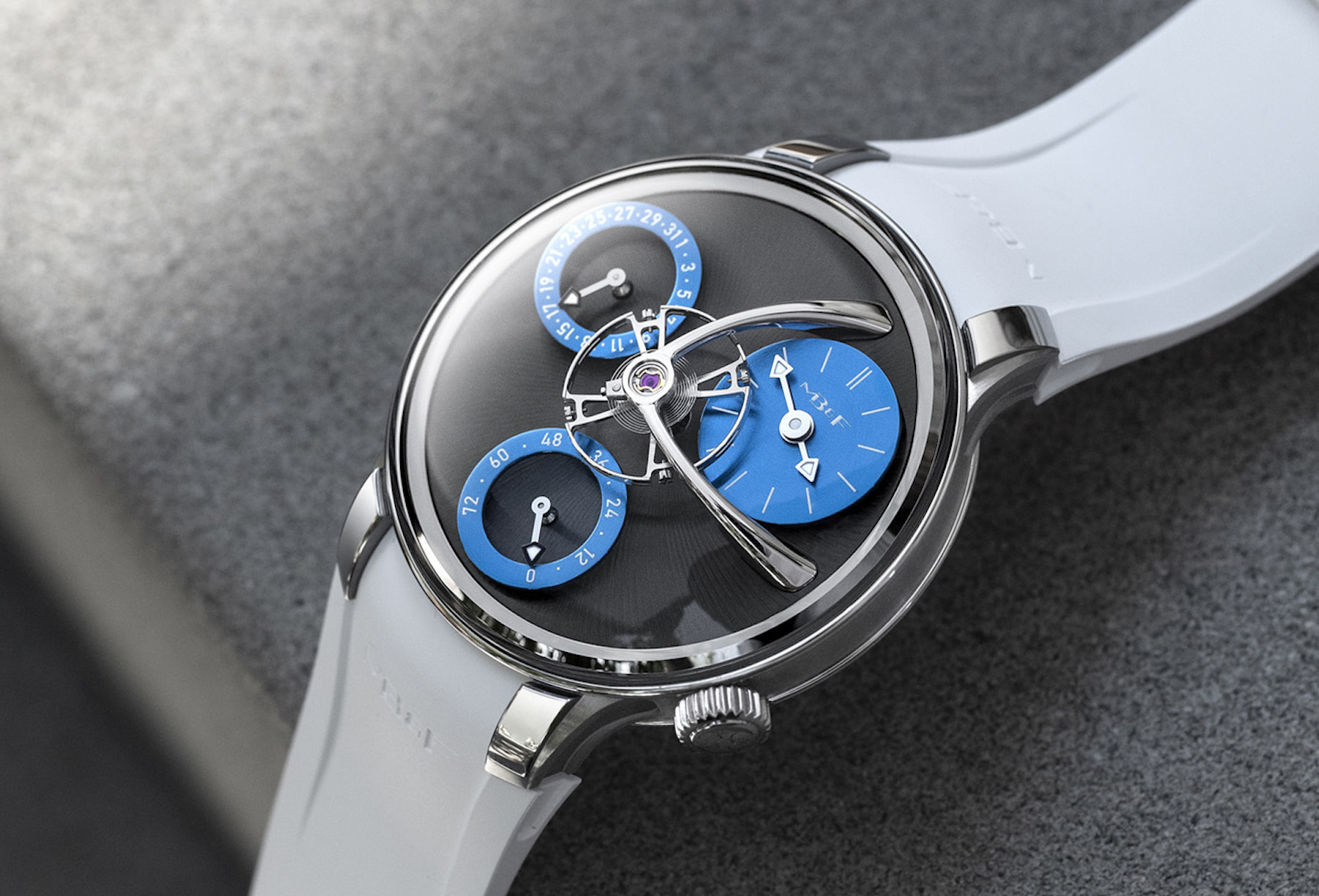 But the dial of the limited edition certainly looks different, and there is a very good reason for that. Black and blue are the corporate colors of Westime, whose Beverly Hills location is hosting one of MB&F’s first LABs. This is a retail concept introduced for locations that aren’t big enough to host an actual M.A.D. Gallery. To celebrate this occasion, MB&F introduces the Beverly Hills limited edition in collaboration with Westime. There will be 25 pieces of this version with a black base plate and blue sub-dials. 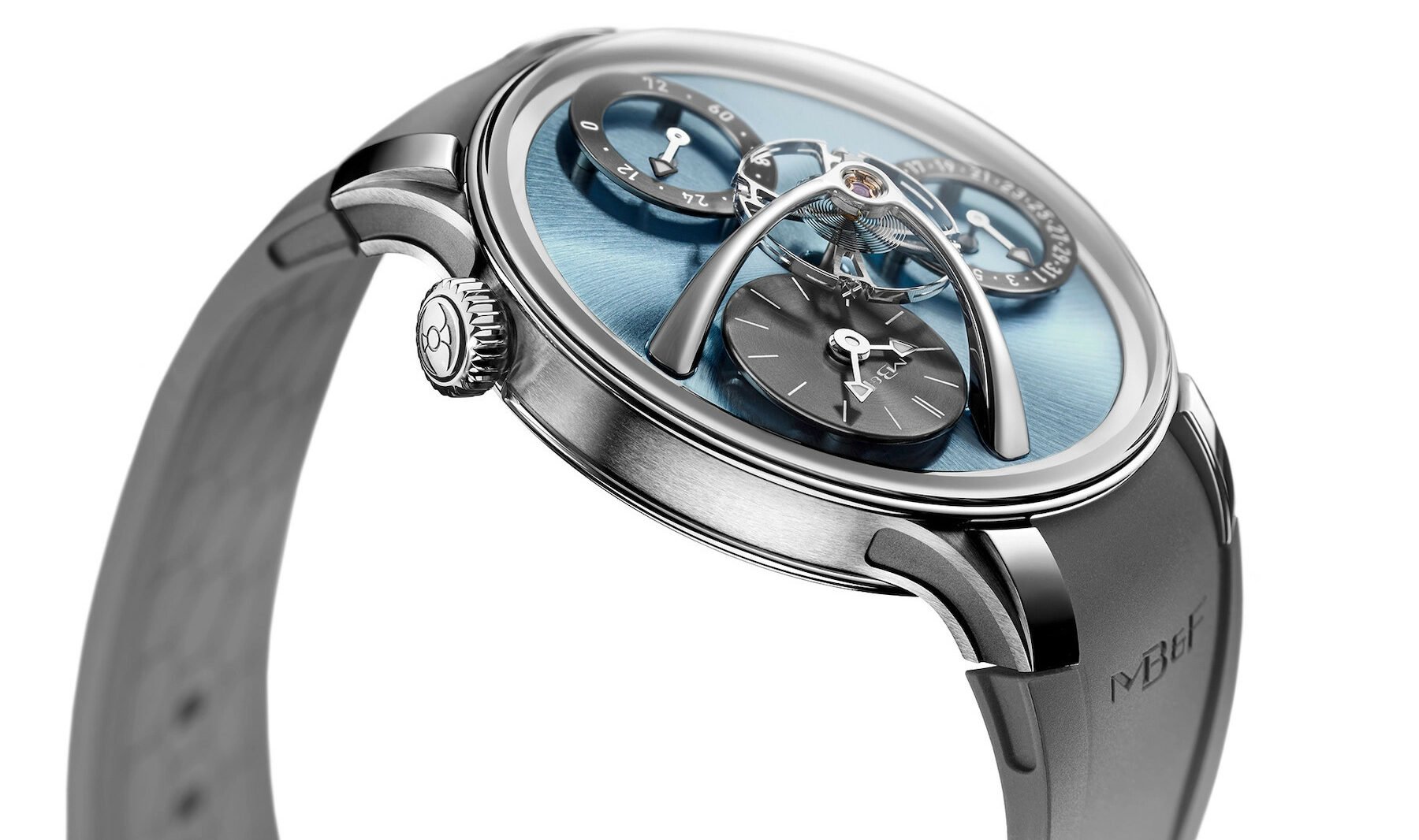 The Legacy Machine Split Escapement EVO is the most stripped-down watch in the EVO lineup, but I think the calmer dial looks more elegant. Moreover, it also allows you to fully appreciate its sub-dials and that magnificent balance wheel at its center. At 44mm wide and 17.5mm tall, it would surely have quite a prominent stance on my 17cm wrist. Then again, something this beautiful is made to be seen. I think the price, though, is going to be a factor that will stop me from buying either one of the new EVOs.

At US$80,000, I’m not saying these are expensive watches for what they are, but they’re certainly too expensive for me. If you’re interested in learning more about these Legacy Machine Split Escapement EVO models, make sure to check out MB&F’s official website. The icy-blue version is available from the brand’s webshop as of today, August 29th. The Beverly Hills version of the watch will only be sold through Westime’s Beverly Hills shop.

Let me know what you think of MB&F’s new LM Split Escapement EVO models in the comments!

Hot Topics
Introducing: The Omega Speedmaster Super Racing With Spirate System
149 comments
Design Vs. Specs — Which Is More Important To You When Buying A Watch?
85 comments
The Updated Bracelet For The Omega Speedmaster Professional 3861 — Here Is What’s New!
52 comments
The Time To Buy Is Now: How The Current Economic Climate Influences Watch Buying And How You Should React
49 comments
Introducing: The New Cartier Tank Française
49 comments
Popular
The Ultimate Sports Rolex – The Explorer II Reference 1655
Robert-Jan Broer
17
(From The Archives) Shut Up & Read The Truth About Cartier Watches
George Cramer
21
Hands-On With The Seiko Prospex Dawn Grey Series
Robert-Jan Broer
12