MeisterSinger has released two new variants in its Neo collection in a bold green hue. The Neo is the leanest and one of the most minimalistic pieces in the German brand’s lineup. With its thin, round case and single-handed dial, the Neo has a timeless style that looks as if it has been around for decades. The simplicity of its dial is the master stroke of Manfred Brassler, the founder of MeisterSinger. Since relaunching in 2015 with a design renovation, the Neo has offered classic retro expression with modern touches. 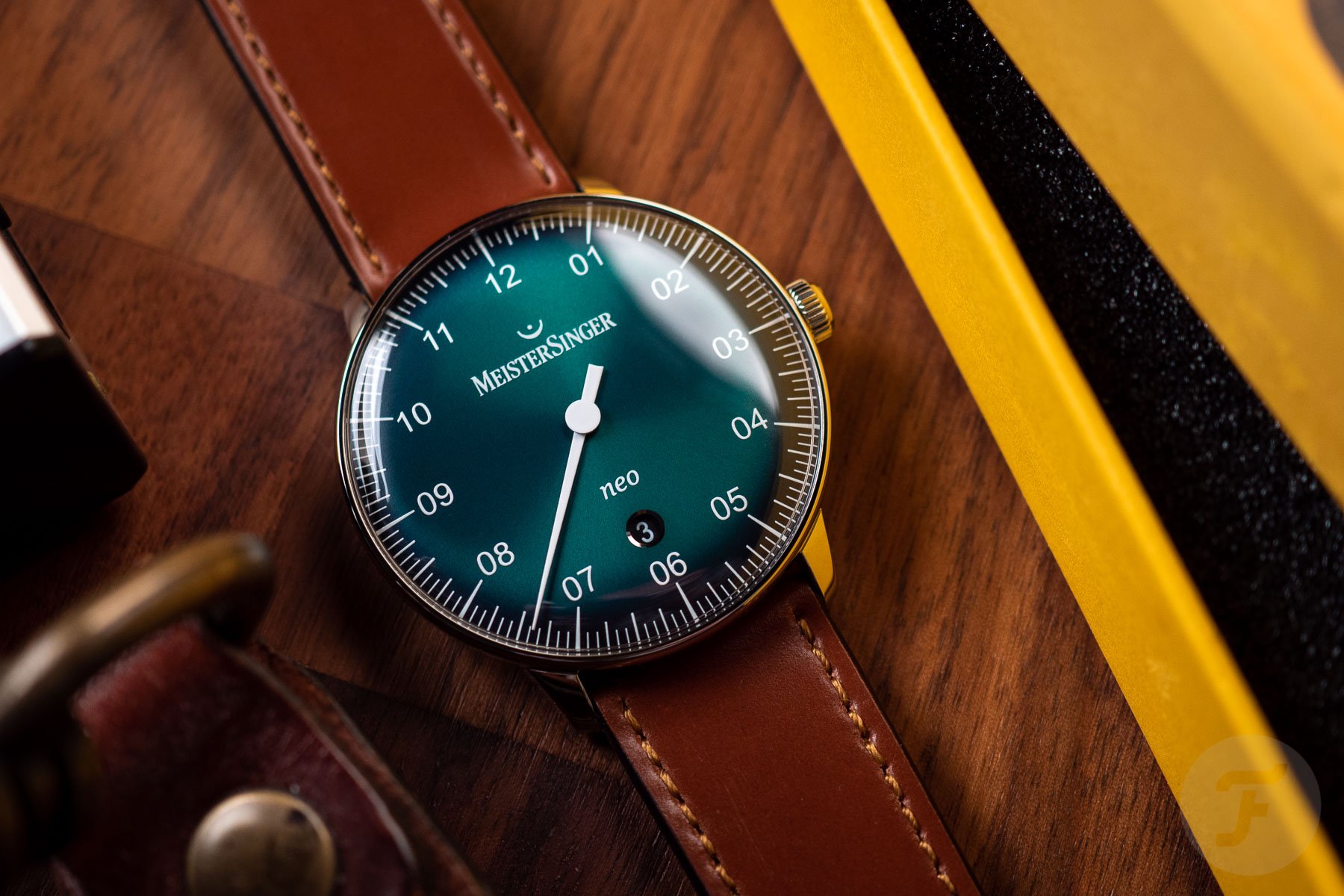 The Münster-based watchmaker has been busy with its high-mechanical watch launches of late. First, there was the Singularis with its in-house movement, then came the Bell Hora with a chiming complication. The new green Neo model hit the market without much fanfare. But for a longstanding solid offering that practically sells itself, perhaps it just didn’t need any. Anyhow, we wanted to get both sizes in the office to see them for ourselves. 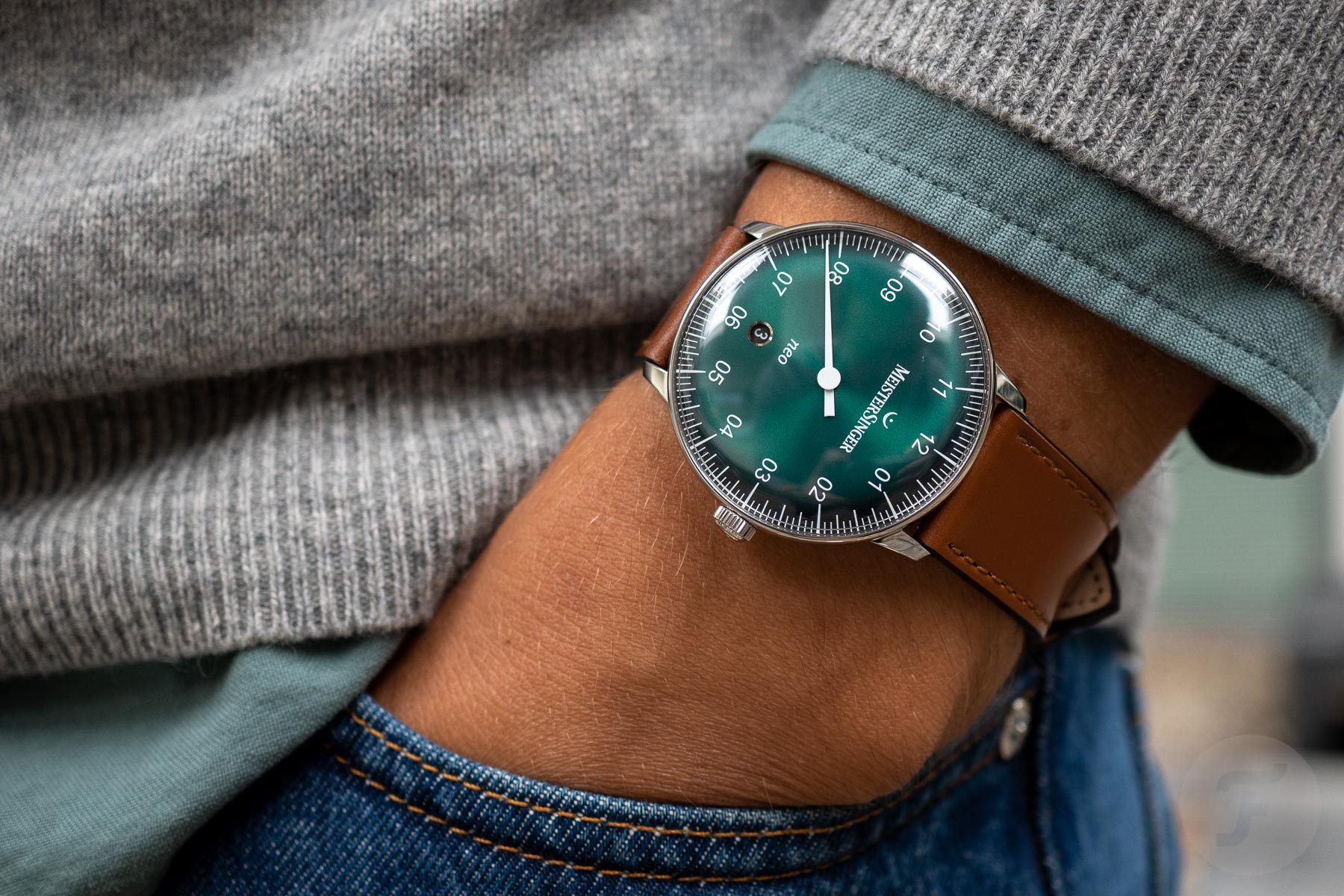 Known for its single-hand timepieces, MeisterSinger has a distinctive brand identity. Forfeiting the minute hand, the Neo is rooted in the independent brand’s philosophy to convey time in a calm and intuitive manner. In a market where precision is the name of the game, MeisterSinger makes watches that display time only to the nearest five minutes. In its latest iteration with a green sunburst gradient dial, the Neo aims to embody style elements of the 1960s. 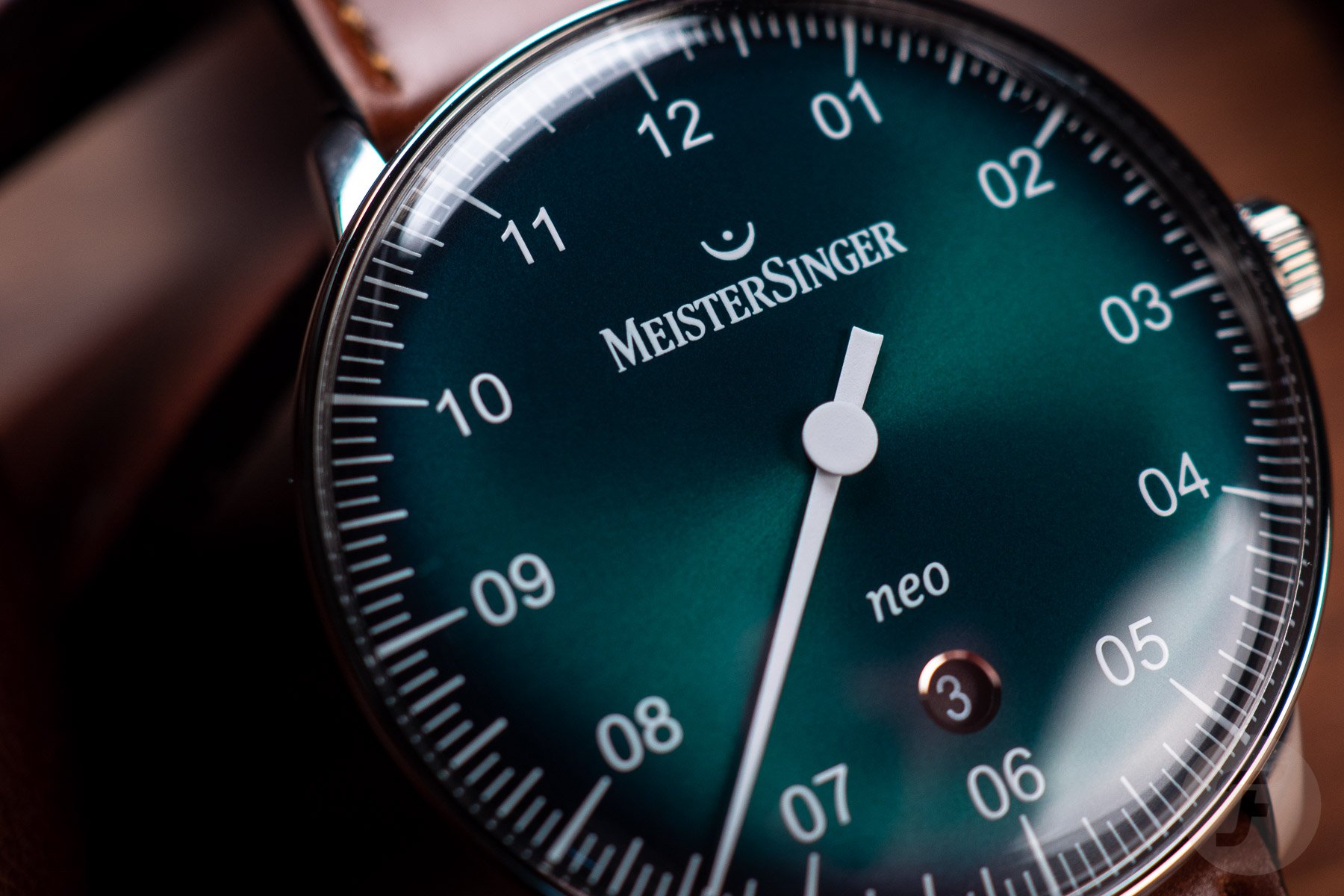 The technique to apply the gradient color is known as dégradé, which MeisterSinger uses to reference a popular design aesthetic in the ’60s. The vibrant green hue darkens as it radiates from the center to add a sense of depth to such a striking color. Moreover, it creates a soft balance and nuances in contrast with the clean and simple dial. While dégradé dials are no novelty to us, the Neo one is nonetheless beautifully executed. 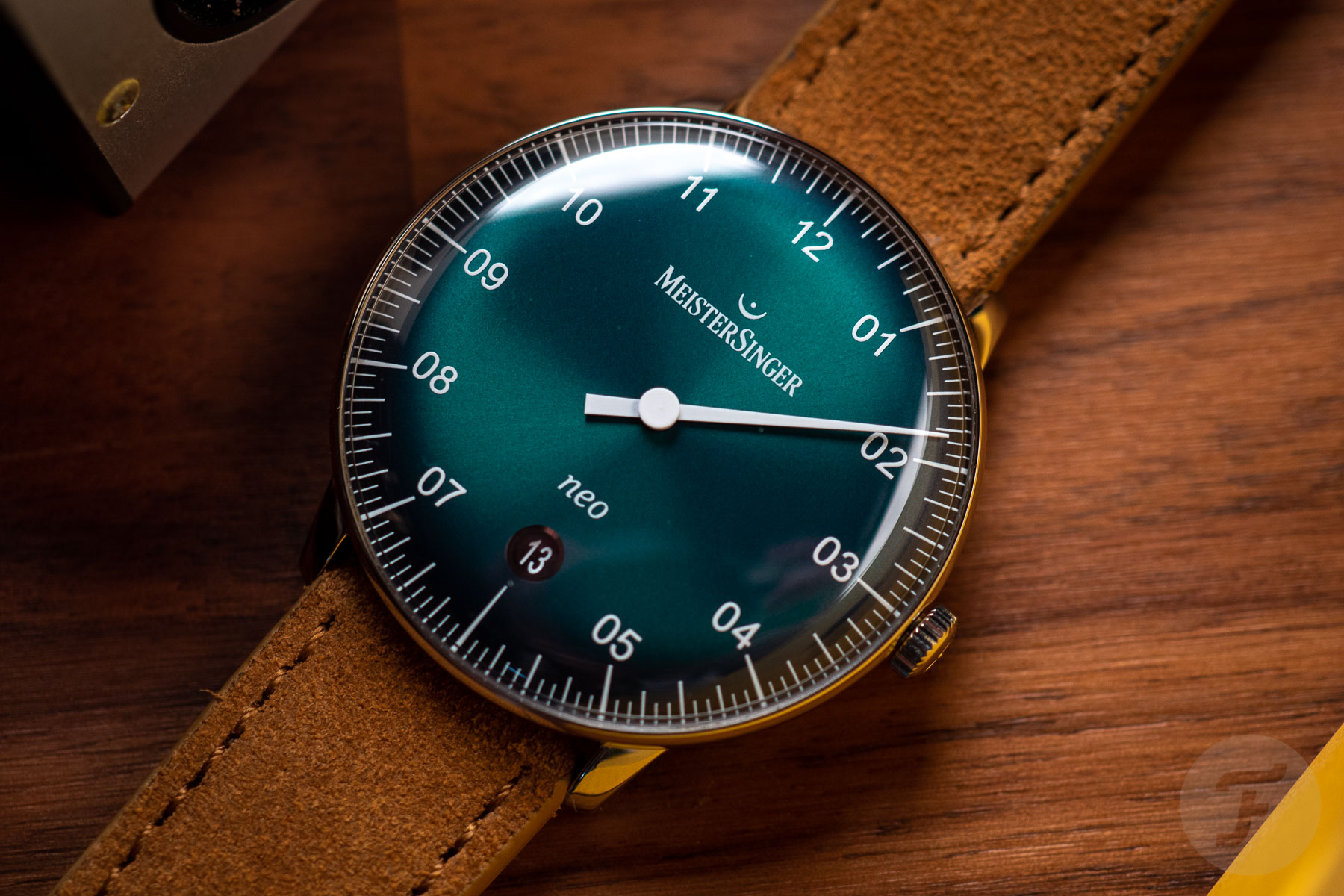 Another signature feature of the Neo is the graphic element on the dial. Characterizing the modern-day Neo is the sans-serif Helvetica font for the atypical double-digit hour numerals from 01 to 12. According to the German creator, it is a typeface chosen during the design update for its use since the ’60s to represent sober and factual messages. Interestingly, this is a typography style that has become super popular among luxury and global brands in recent years. 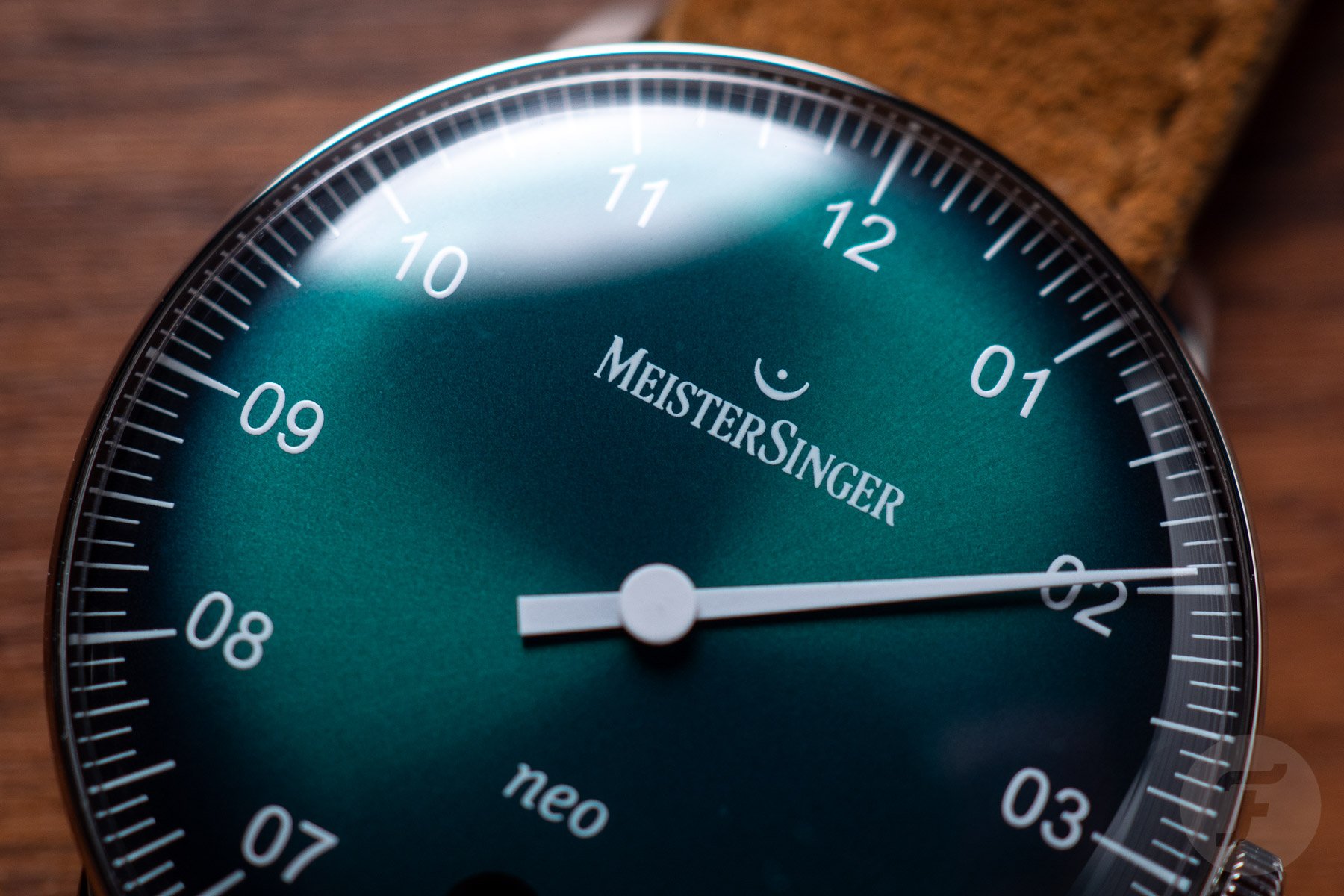 The Neo features a round date window at 6 o’clock to match the shape of the case. Of course, we cannot forget the hallmark single hand, which is longer and thinner than normal watch hands as it tapers to a needlepoint. The hand sweeps around the dial and touches each of the demarcations to tell time to the nearest five minutes. How do you know the precise minute of the hour, you may ask? You don’t. That is the whole concept of a MeisterSinger timepiece. You have to let go and relax, knowing that time elapses without you watching it. You just have to be in the moment and make the most of it. 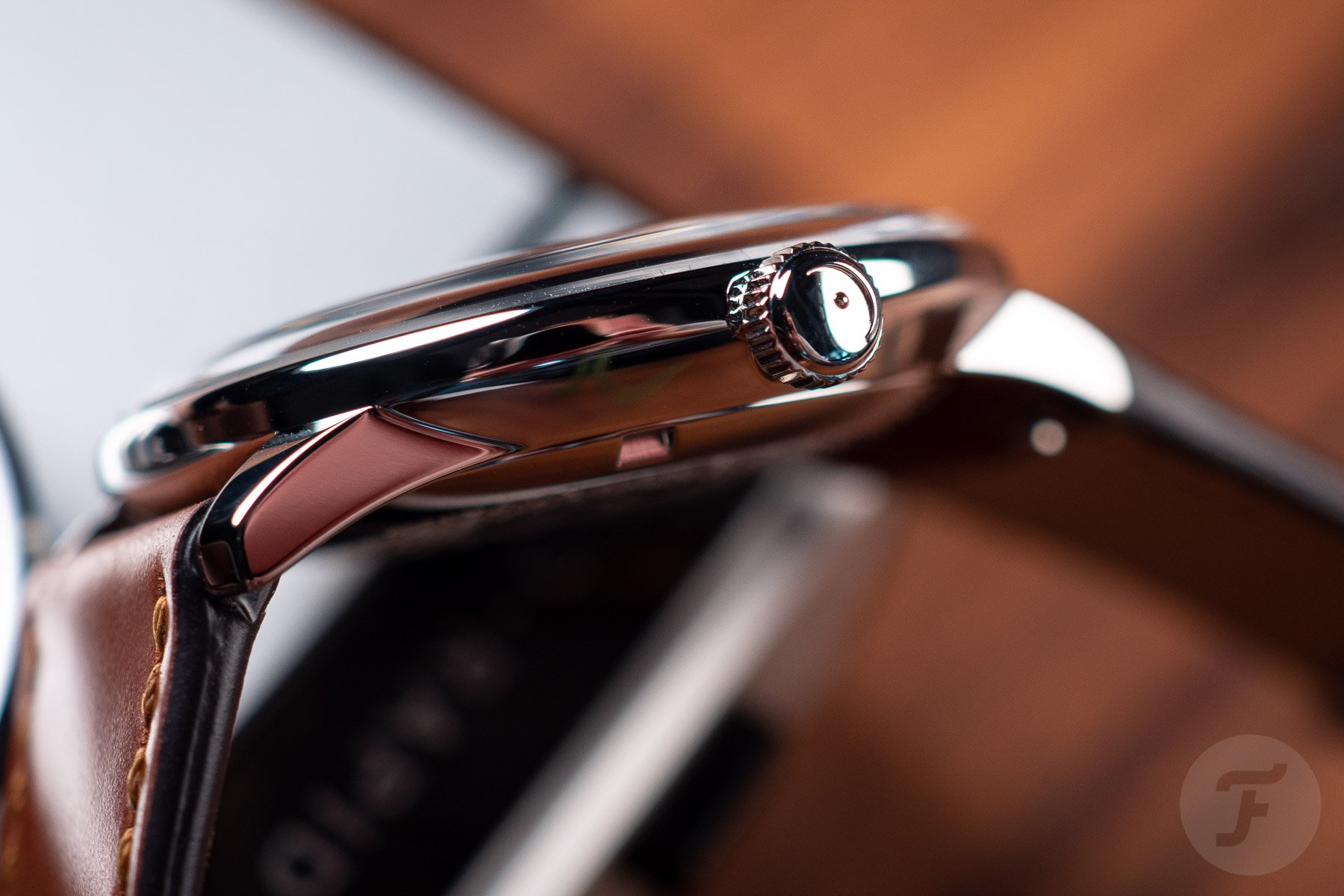 Not only on the inside but also on the outside, the case of the Neo pays homage to the classic watches of the ’60s. MeisterSinger says the two-piece construction and the domed hardened acrylic glass hark back to that time when they were popular. The polished steel casing only consists of a round body and a solid back cover, bereft of a bezel. Its 36mm sizing was also typical in those days. And it wasn’t until 2017 that the 40mm Neo Plus joined the line. So for the Neo Green Dégradé, both sizes are available, and both come with a thickness of just 9.7mm. The slim case profile nods to the era when slender watches represented elegance and refinement. The case also provides water resistance of up to 30 meters. 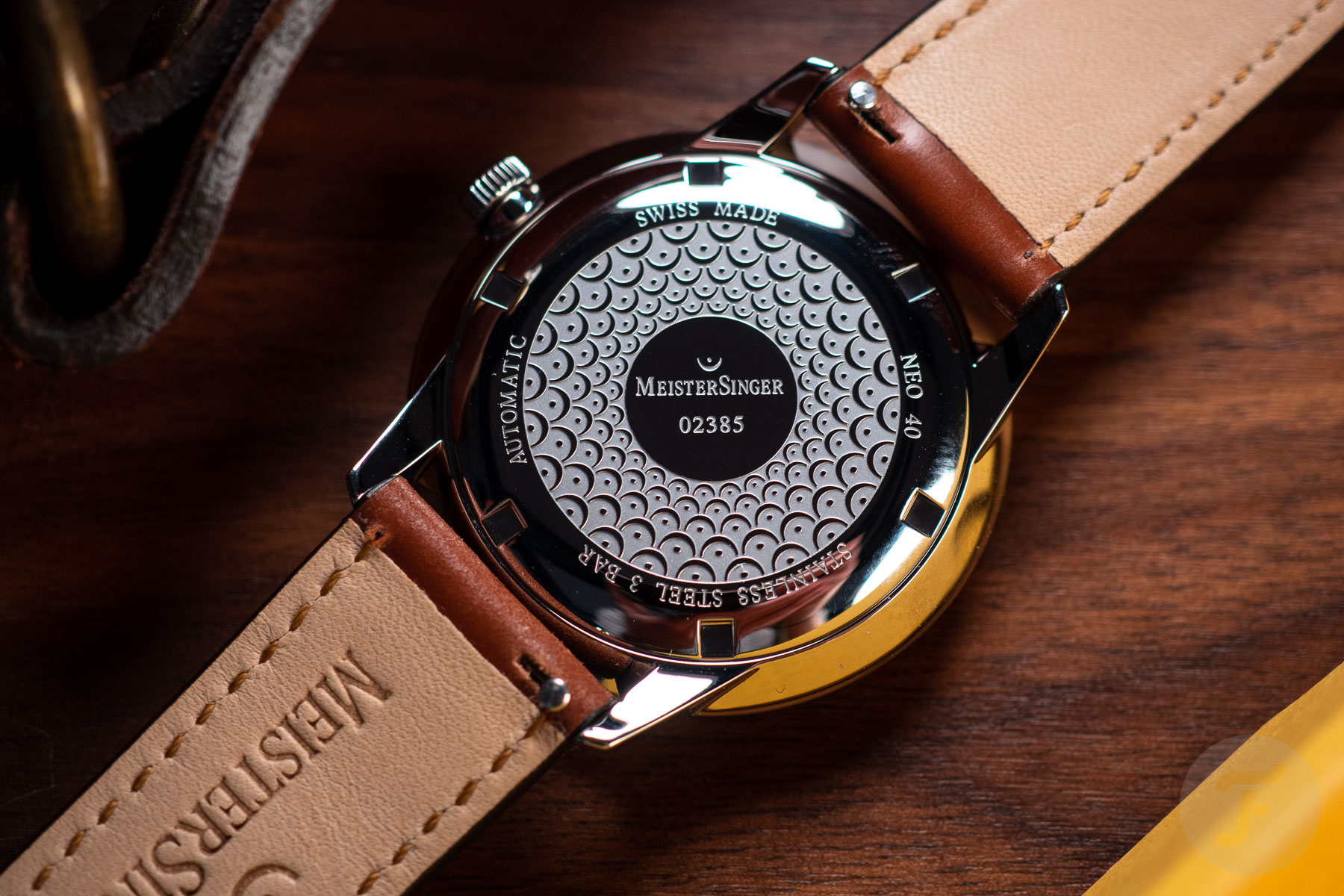 As for the case back, it is engraved with a beautiful pattern of the fermata motif from the MeisterSinger graphical logo. A fermata, meaning “pause” in English, is a symbol used in music to indicate the prolonging of a note. With this emblem for the brand, need one say more? Underneath the closed back is the Swiss automatic Sellita SW200 caliber, which is specially modified for the brand’s single-hand watches. This reliable movement beats at the frequency of 28,800vph (4Hz) and guarantees a power reserve of 38 hours. 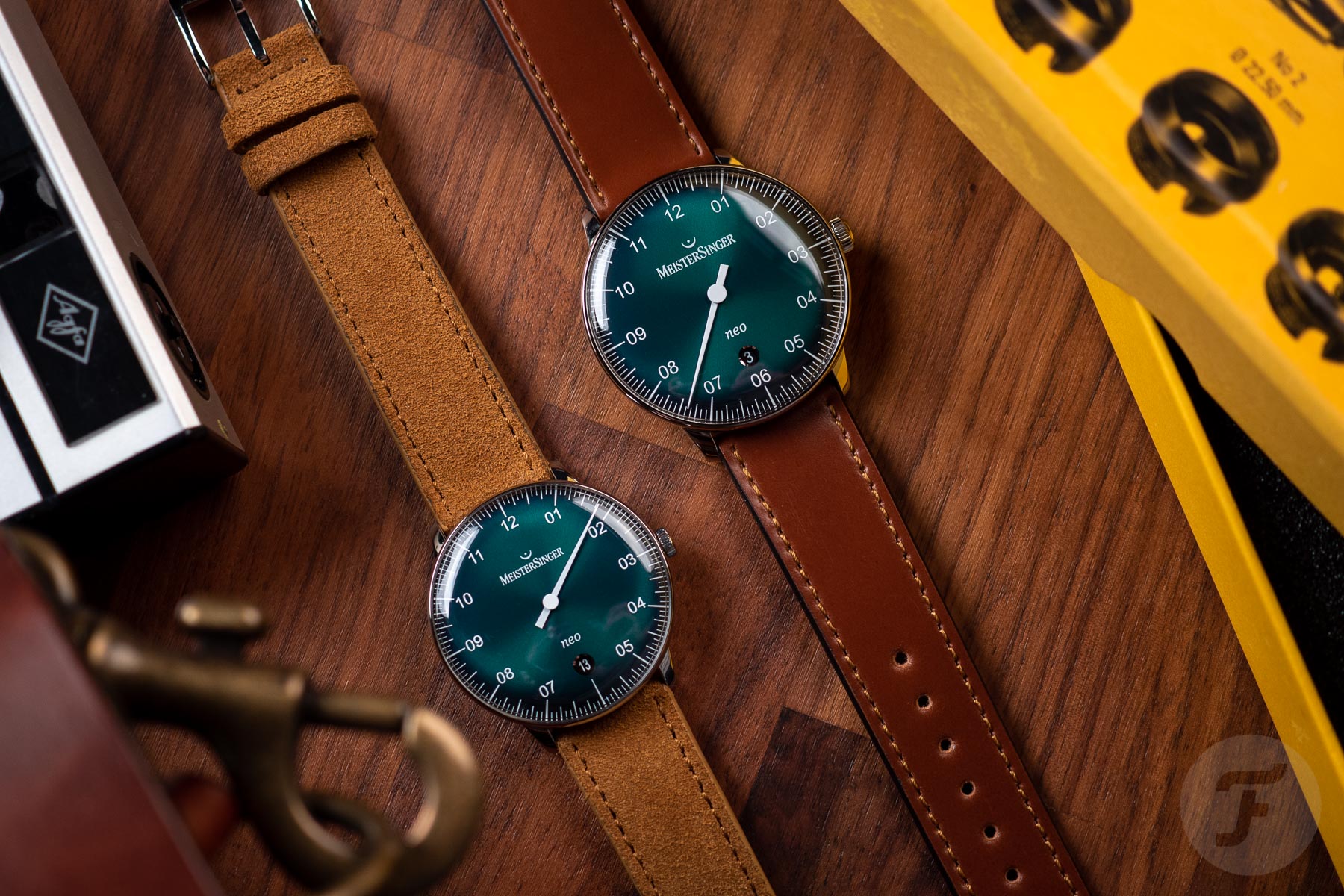 MeisterSinger as a brand may not be stereotypically “German”, but its designs are certainly as Bauhaus as it gets. The Neo won’t give you all the bells and whistles. What it offers you instead is the meaning of time. The price of the Neo 36 with a brown suede leather strap is €1,190, while the 40mm Neo Plus with a dark brown Cordovan leather strap is €1,290 including VAT.