My colleagues’ articles on grail watches here on Fratello have shown that “grail” doesn’t mean the same thing for everyone. Therefore, I will introduce you to a story from my past to illustrate what a “grail” means to me. To imagine that my path to Montblanc’s 1858 Split Second Chronograph had already been paved since my childhood almost frightens me, but viewing it as consistency in my life feels acceptable.

Several of the watches that I own are very special to me. Equally, a number of watches that I considered grails in the past have faded from my mind or have become much less desirable when I look at them today. From time to time, a watch impetuously sparks my desire to own it. But often, that will just be my next purchase if I don’t discard the idea completely. Therefore, selecting the watch that I truly consider a grail turned out to be more demanding than I had expected. Thus, I let my mind wander through my past, hoping to find something resembling the concept of a grail. Suddenly, I remembered the story of my childhood grail as clear as day. Working from that, I knew precisely the only watch that I could truthfully call a grail.

I’m taking you clearly off-topic here. But for me, history has repeated itself, as it is proverbially credited to do. So, please, let me take you on a little journey into Andreas’s past. 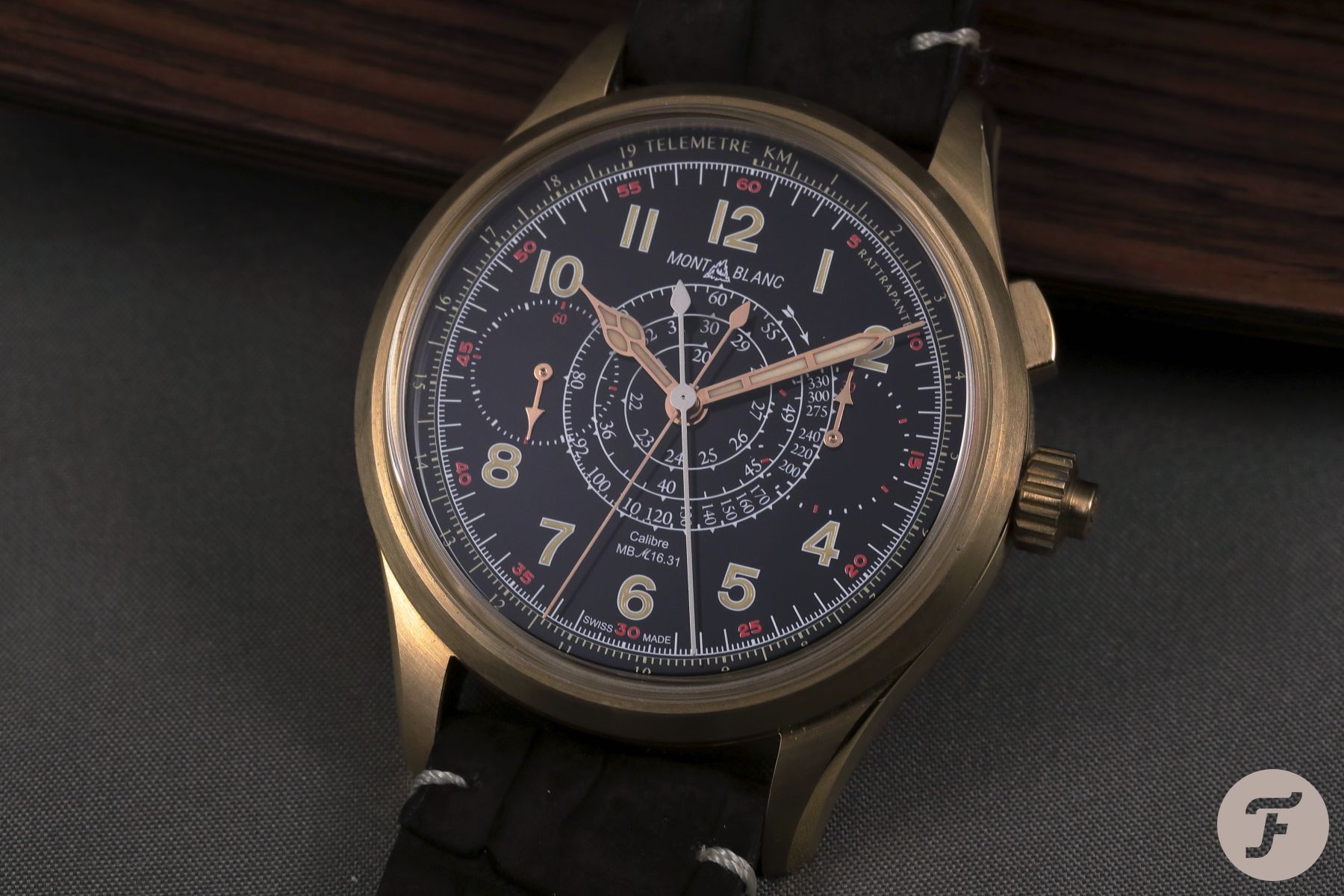 When I was a child, I, like many boys, was a fan of dinosaurs. Soon, my interest extended to other animals from those ancient times. To support my enthusiasm for this topic, my father took me to local trade shows where fossils and minerals were sold. It certainly would have been fantastic to own my own dinosaur skeleton, but I realized that the skeleton of such a huge animal would not fit into my room at home. Still, there were other animals that fascinated me. Trilobites are small animals that populated the sea floor many millions of years before the first dinosaur appeared on earth. You can buy a simple trilobite at such a trade fair for a few euros, making them perfect gifts for enthusiastic children. Similar to watches, these fossilized trilobites are relatively small objects that bear a lot of interesting details to discover.

I was a lucky boy because my father even took me to the Senckenberg Museum of Natural History in Frankfurt. In the first big hall of that museum, you meet several huge skeletons of dinosaurs. When you’re a little boy, they appear even bigger, so those dinosaurs didn’t lose their charm for me. Whenever I was visiting that museum, though, another exhibit soon enticed me away from the dinosaurs — a small trilobite carrying the scientific name Ceratarges armatus. This trilobite has long spines extruding from his body. A fascinating miniature monster, it was an extremely rare find from Germany. Owning such a trilobite was my greatest dream. I was realistic about the fact that this was a dream, though. This specimen was much too rare that a little boy could own it. And even if someone had decided to sell it, the price would have been astronomical. 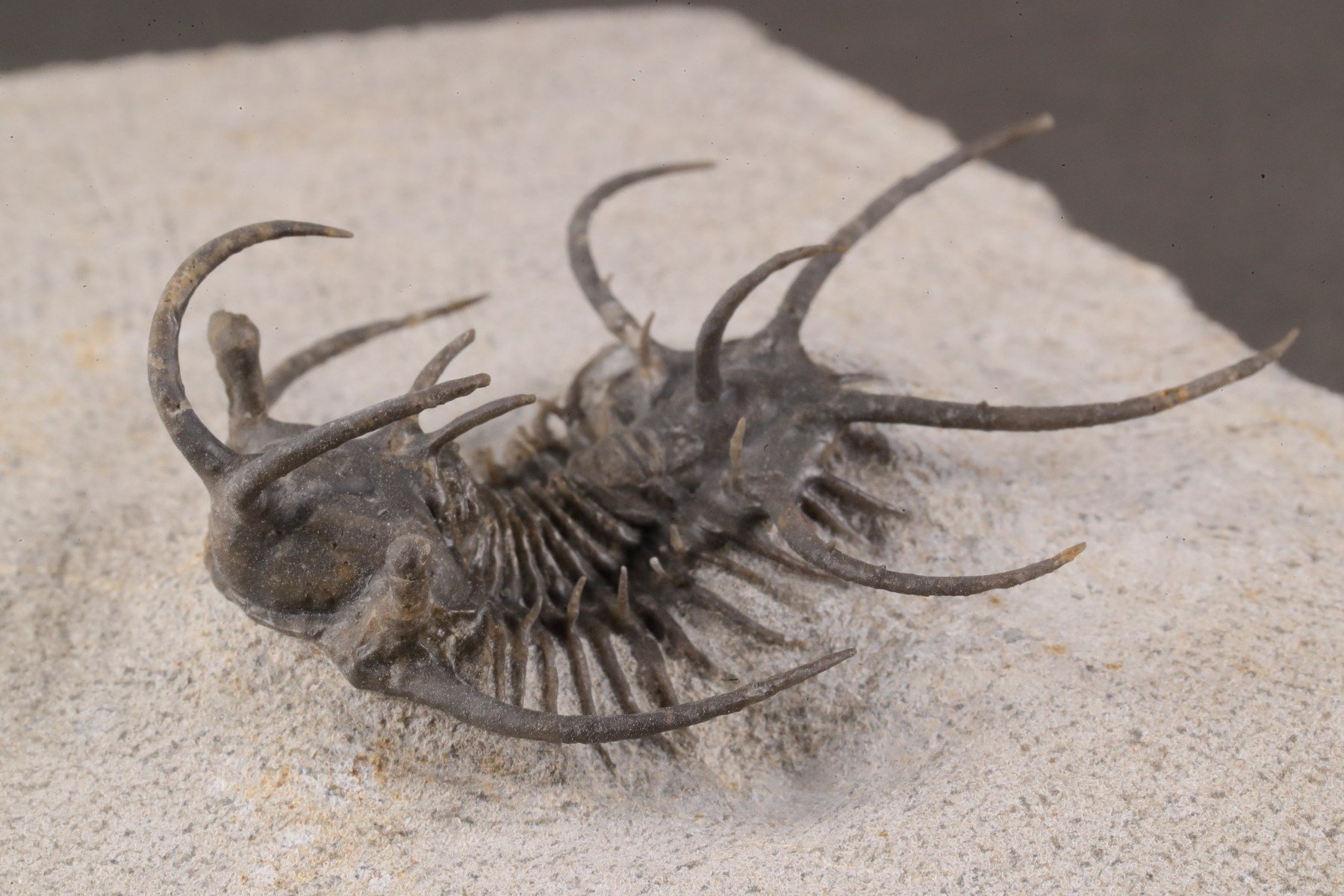 Many years passed, and my interest in dinosaurs and fossils declined. Then, almost incidentally, I visited an exhibition in Hamburg where extraordinary fossils were shown, and among them, trilobites. But what kind of trilobites those were! They were spiny trilobites that I had never seen before, and they were fantastically preserved. Back home, I searched the internet for these creatures. I found sites that offered such spiny trilobites for sale. Wow! I was back into fossils and absorbed all available information. I learned that many spectacular trilobites offered on the internet were fakes (do you notice the similarities to watches?).

So I returned to that trade fair where fossils and minerals were sold. After meeting a few experts, one of them guided me to a booth of a highly respected master preparator. He had several breathtaking spiny trilobites on offer. Which species did I ask for? Correct — Ceratarges armatus. And he had one, perfectly preserved, masterfully prepared from the enclosing stone. At that time, such fossils had been found in Morocco in a much better state of preservation than those from Germany. Well, that seller offered the Ceratarges to me at a good price, and it became mine.

What still deeply impresses me is that my originally unattainable childhood pipe dream not only became a reality, but I even exceeded it. My Ceratarges is much better preserved and exhibits many more details than the one displayed in the Senckenberg Museum. This story told me that seemingly impossible wishes could become a reality if you are patient. 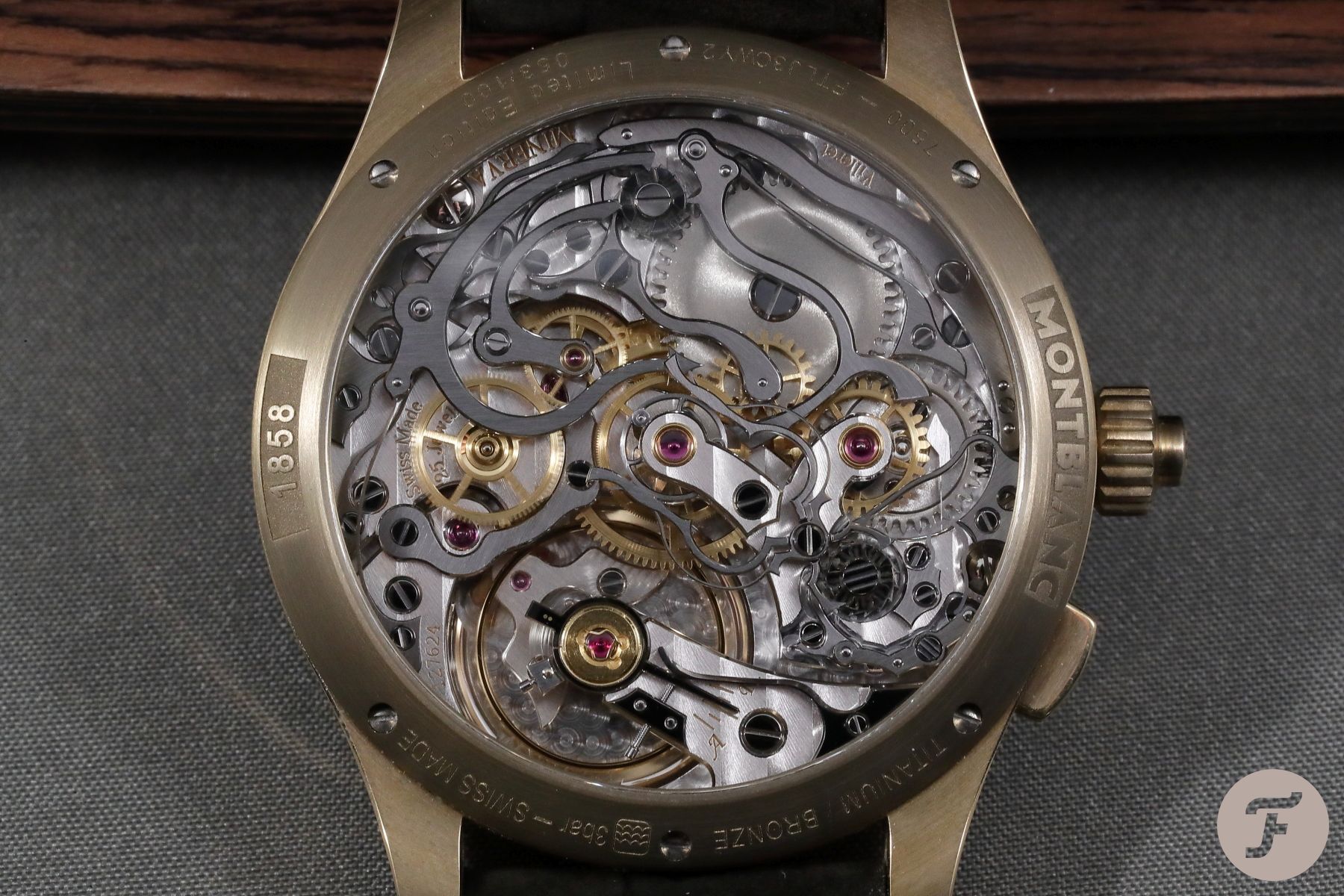 A growing passion for watches

When my passion for watches evolved, I surpassed the phase of falling in love with a single brand and the phase of focusing solely on the design. My interest in actual watchmaking and traditional decoration grew. I became interested in watch movements and learned to appreciate and recognize hand finishing as the pinnacle of traditional high-end watchmaking. I learned that Montblanc, after Richemont bought Minerva and made it part of the brand, was offering high-end chronographs with hand-finished movements at surprisingly fair prices. One of those chronographs then joined my collection.

Few brands offer split-seconds chronographs, and of those who do, only a fraction produce them with high-end, traditionally finished movements.

I have always extended my watch collection by adding watches that were different from those I already had. The reasoning behind that is simple: if I had several almost-identical watches, how should I choose the one to wear next? So, what could I have added to my collection after obtaining that chronograph? Well, the extension of a chronograph and the pinnacle of the complication is the split-seconds chronograph or rattrapante. Few brands offer split-seconds chronographs, and of those who do, only a fraction produce them with high-end, traditionally finished movements. At that time, Vacheron Constantin and Patek Philippe offered split-seconds chronographs with impressive movements. But these watches cost several hundred thousand euros. That was clearly beyond the amount of money I could spend. Was it the end of a dream? 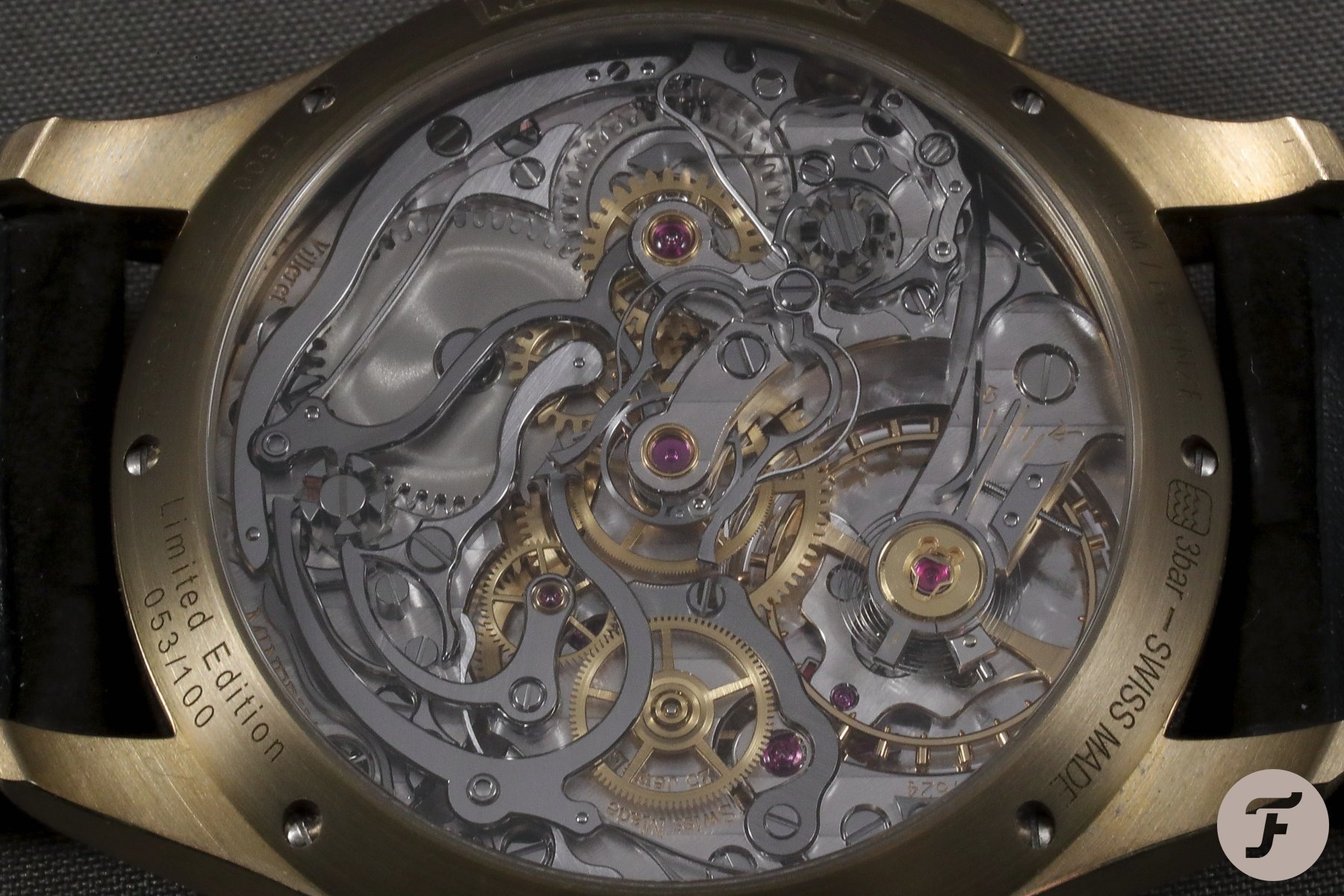 During a visit to the Montblanc manufactures in Le Locle and Villeret, I learned what Montblanc is capable of. From then on, I kept watching out for all the novelties from this brand. In 2019, Montblanc presented the 1858 Split Second Chronograph. I could hardly believe it — a full-fledged traditional rattrapante with a dazzling, hand-finished movement! The price was €33K. Even if you are super rich or a completely manic watch enthusiast, this is a crazy amount of money to spend on a watch. But that was a fraction of the price other brands asked for similar watches. It seemed to be within reach.

I spent a weekend analyzing my financial situation and my mental health. One week after Montblanc presented the watch, I placed my order. I am aware that people spend similar amounts on average Rolex watches these days, but that’s a different category of buyers. I had to be quick as this watch was limited to 100 pieces, and, as I came to find out, only four were delivered to Germany. Three watches were allocated to the Montblanc boutiques in Berlin, Hamburg, and Munich and had probably already been promised to faithful Montblanc customers. One was left over, and that one became mine. 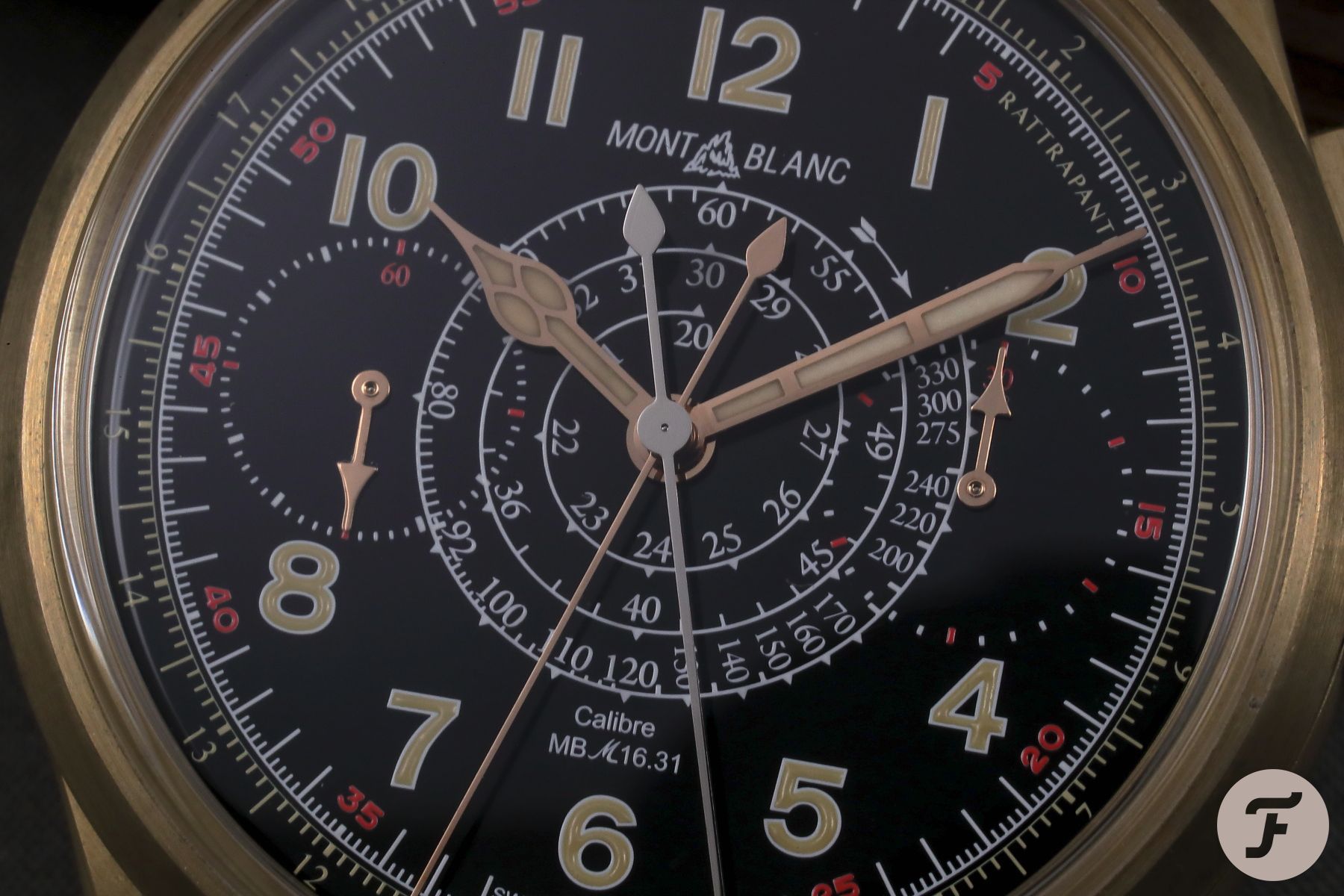 This first edition of Montblanc’s 1858 Split Second Chronograph came with a bronze case. Bronze was just becoming quite popular when the brand launched this watch. This case material matches the vintage feel of this model brilliantly. Even if Montblanc had offered the same watch with a gold case for the same price, I would have preferred bronze. I like the combination of a black dial and a case in a warm tone. The Arabic-numeral hour indexes are not my favorite choice, but they are okay for me in the context of this design. The spiral scale at the center of the dial screams vintage, and it appears oh-so appropriate to me. The sub-dials are almost hidden, but they also match the vintage theme. I also appreciate that the luminous paint on the hands and hour indexes is not white but beige to create a harmonious overall appearance. 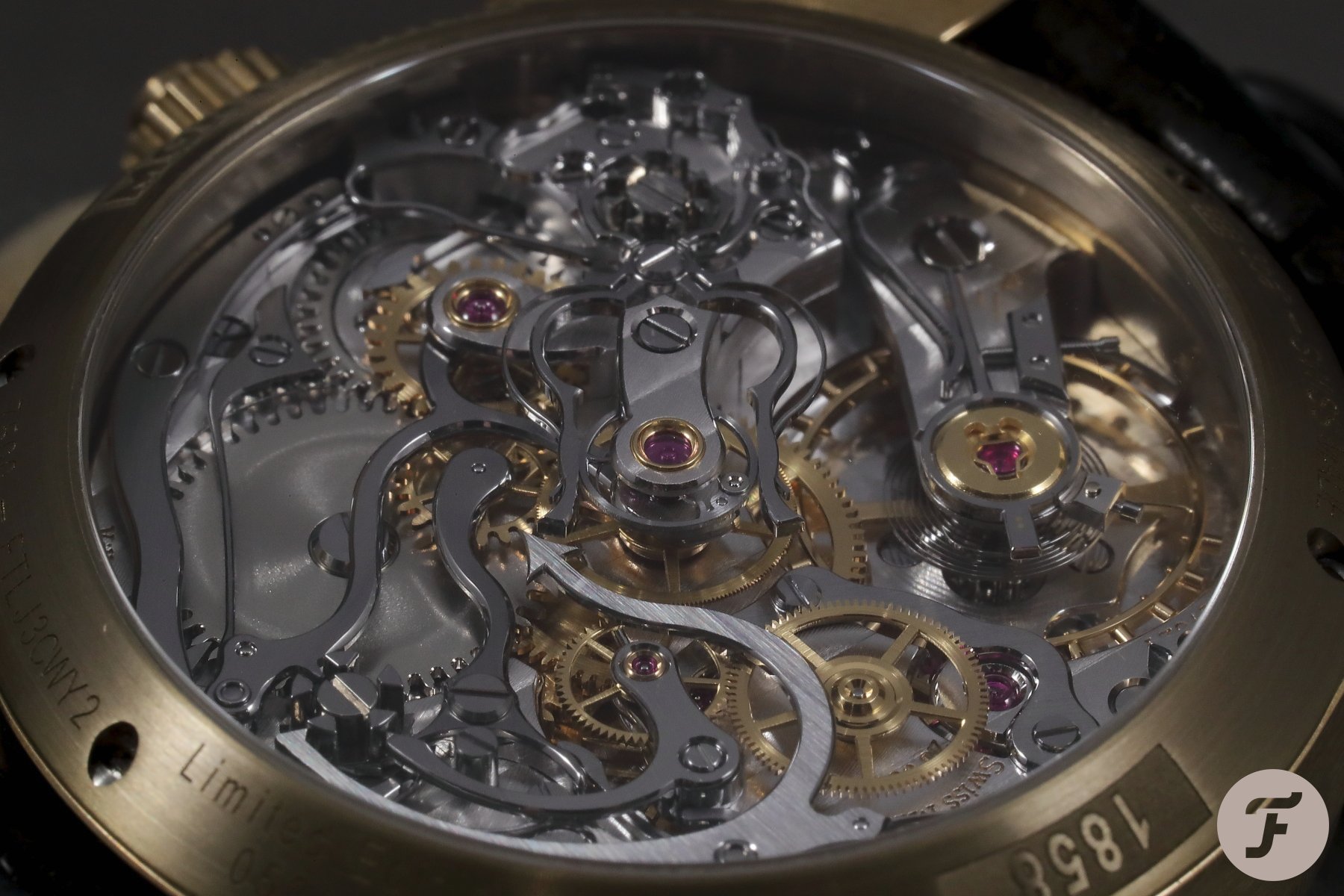 Since then, Montblanc has offered this model in several other case materials and dial colors. So, in theory, there should be a perfect choice for everyone interested in this watch. But, as the production capacities for the movements at Minerva are limited, all these watches are limited models as well.

This watch is big. It’s big in both diameter and thickness — 44mm × 15.2mm, to be exact. The M16.31 pocket watch movement inside requires these dimensions. While this size is still acceptable to me, it might render this fantastic watch unwearable to you. I, however, wouldn’t want this movement to be any smaller. Its three-dimensionality is just stunning. All the perfectly decorated surfaces stand out brilliantly. If you know what to look for when searching for top-notch hand-finishing, you will find everything you could expect in this movement. Minerva produces even the hairsprings in-house. 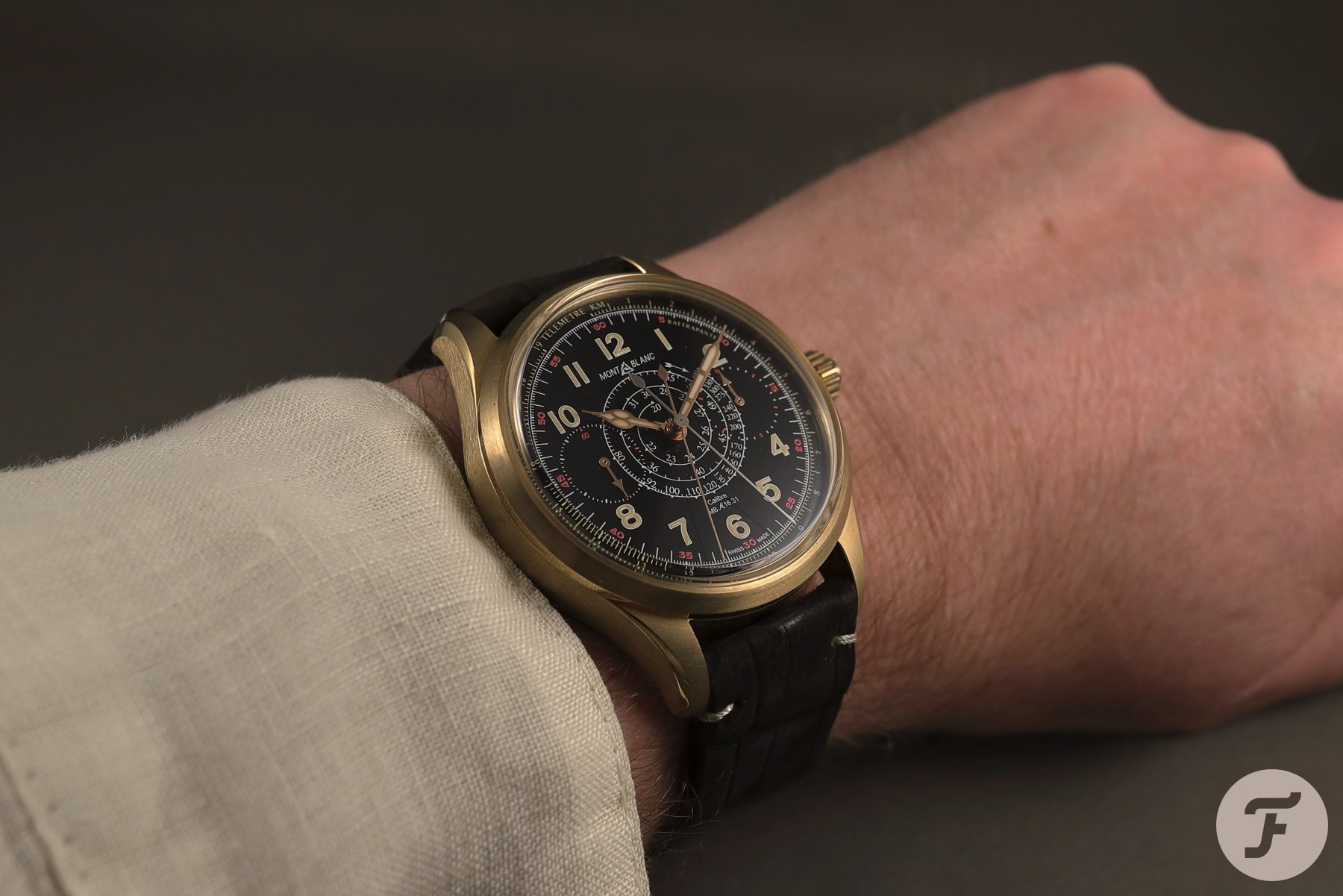 History has repeated itself for me

This watch is a dream — and a dream that came true for me. The story behind this watch is quite similar to that of my childhood pipe dream of the trilobite. Again, I was able to acquire something that seemed completely out of reach. And again, the result exceeded the piece that sparked my desire, as the hand-finishing at Minerva today is at a higher level than at Patek Philippe. This factor also makes it clear that this watch is no poor man’s version of a classic complication but a masterly execution of it. Montblanc is increasingly utilizing the heritage of Minerva and offers the resulting watches at remarkable prices. If you are interested in high-end watchmaking, I can only recommend that you keep an eye on this brand.

Have you experienced anything similar? Was there any watch or other collectible that you considered far out of reach but were eventually able to get hold of? Or does a grail (watch) mean something entirely different to you? Are you an absolutely straight-thinking, rational person who doesn’t chase rainbows but makes decisions and defines targets? Please, share your thoughts with us.

Learn about Montblanc’s achievements in the past here and visit the brand’s homepage to get an overview of its current offerings.