A 500-meter diver without the bulk
Fratello
comments 3
Share

When I first encountered Delma, I was in the early stages of my writing career. I’d managed to secure a hands-on review of the Blue Shark III, a watch of which I’d previously been unaware. I’d been pretty confident that the watch I was due to receive would be little more than the standard kind of Rolex homage we see smaller brands churning out ten a penny. However, having the Blue Shark III in my hands changed my perception entirely. I’m keen on novel and ambitious design, yes, but anyone that reads my work frequently will know that I place an even greater emphasis on execution. It was there that the Delma excelled and exactly the reason I was keen to see the Delma Cayman Bronze in the metal.

Despite the fact I only have two bronze watches in my collection, I have quite a soft spot for the material. Funnily enough, while I was spending some time with the Cayman bronze, I was also in the process of reorganizing my collection. It sounds like a quaint enough Sunday afternoon activity, but with 77 watches in my collection, spread over several locations for security reasons, it was more of an undertaking than you might think. 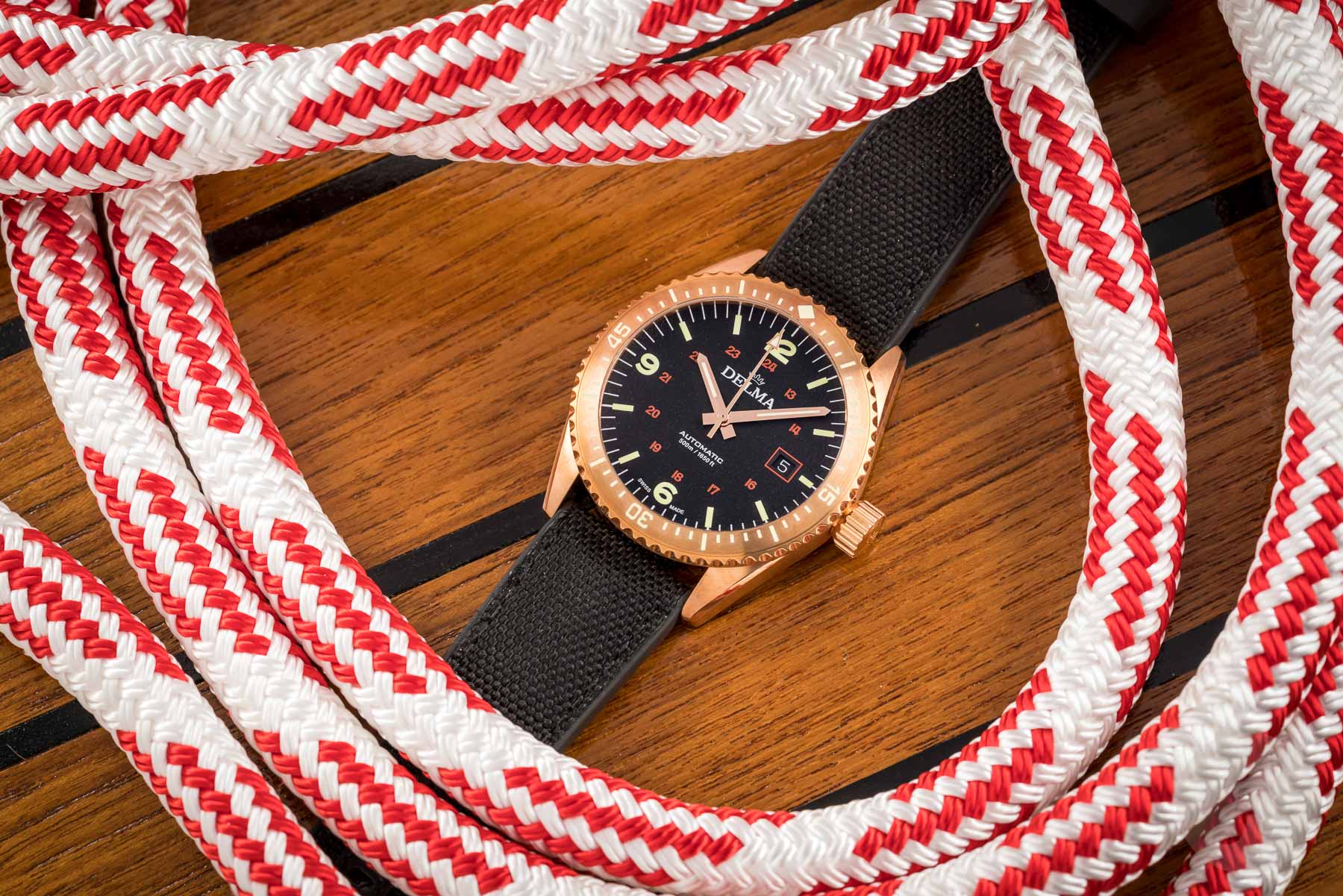 There’s nothing wrong with a little obsession

Obsessively anal as I am, I decided to split up my collection into groups of “favorites”. Yes, I know, I am perhaps just one pair of socks and sandals away from building a shed to house the train set I haven’t yet bought (but frequently dream of), but this is the truth. I’m baring my soul to you in full acceptance of the ridicule that might befall me because my point is this: despite bronze-cased watches numbering just two in that hoard, both featured in my “Top 8” pieces and, perhaps more impressively, both featured on the very select list of watch I would simply never part with under any circumstances. 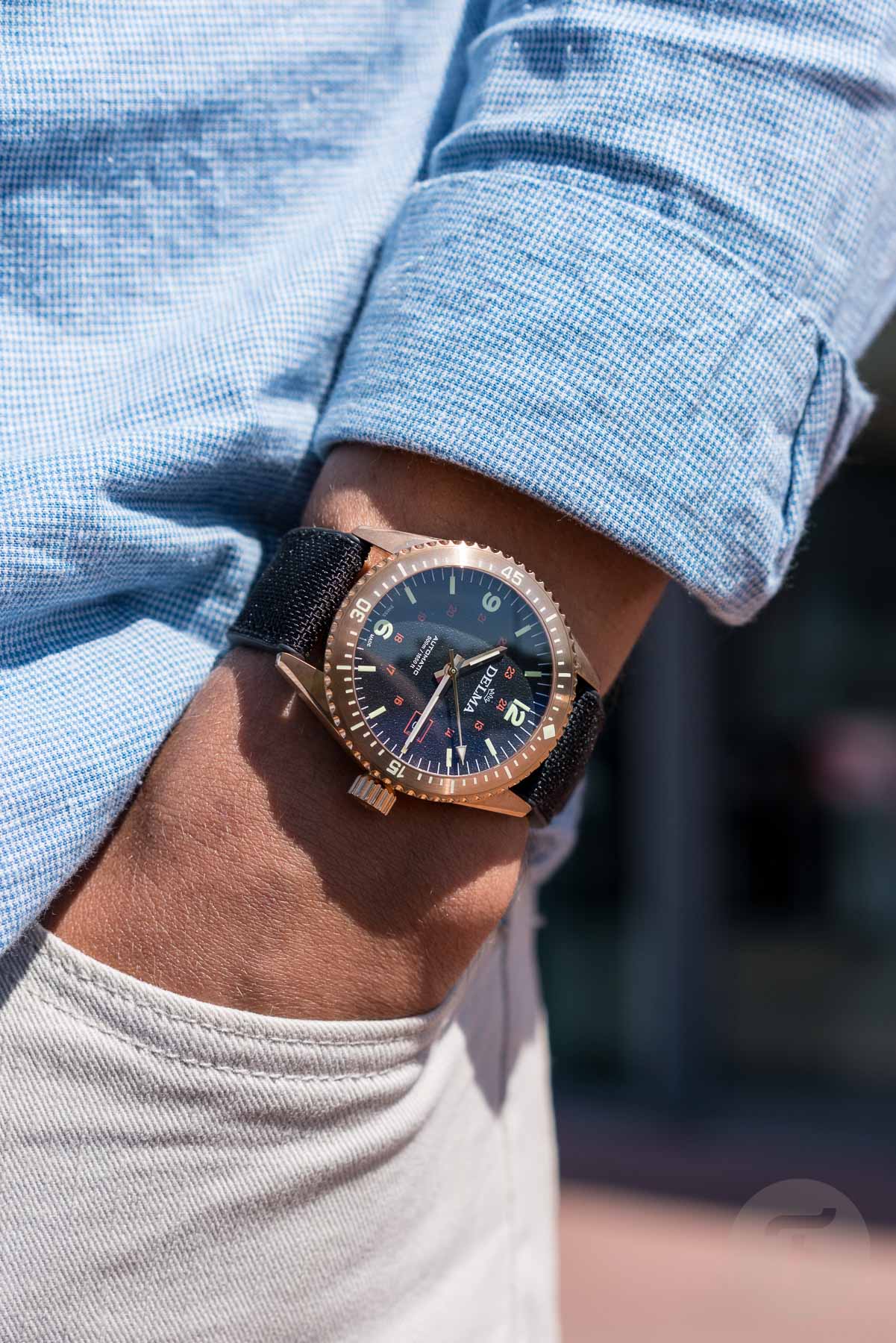 Those two bronze watches that stand so proudly amongst the ranks of steel stalwarts? The Schofield Beater B4 — in a heavily patinated and beautifully bloomed bronze — and the Laventure Sous-Marine. Now, for those of you that know me, those picks will be thoroughly unsurprising. They come from probably my two favorite brands in the world. As such, getting anywhere close to challenging their position in my collection is tough for all-comers. It’s even tougher for a watch crafted from the same material. How could I not draw a line between my beloveds and the Delma Cayman Bronze? Ignoring the connection would have been impossible… so I didn’t. 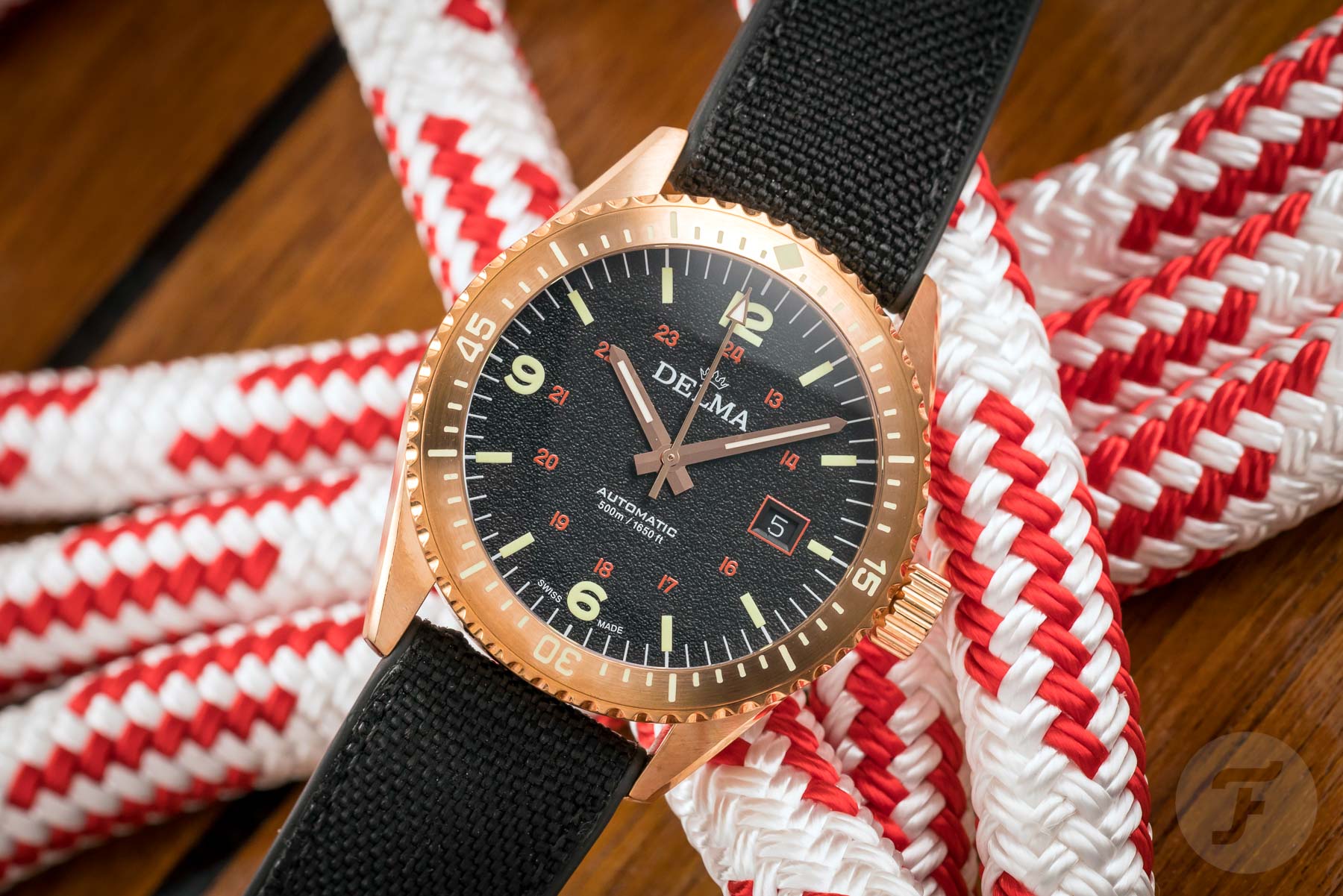 Breaking down the bronze

The first thing to note, especially if you’re new to bronze watches in general, is the color. There is a huge amount of variation in bronze tones and their level of out-of-the-box patination that can change your opinion of a piece in a heartbeat. To simplify things, there are two main types of bronze used for watchmaking (and various qualities thereof within these distinctions). 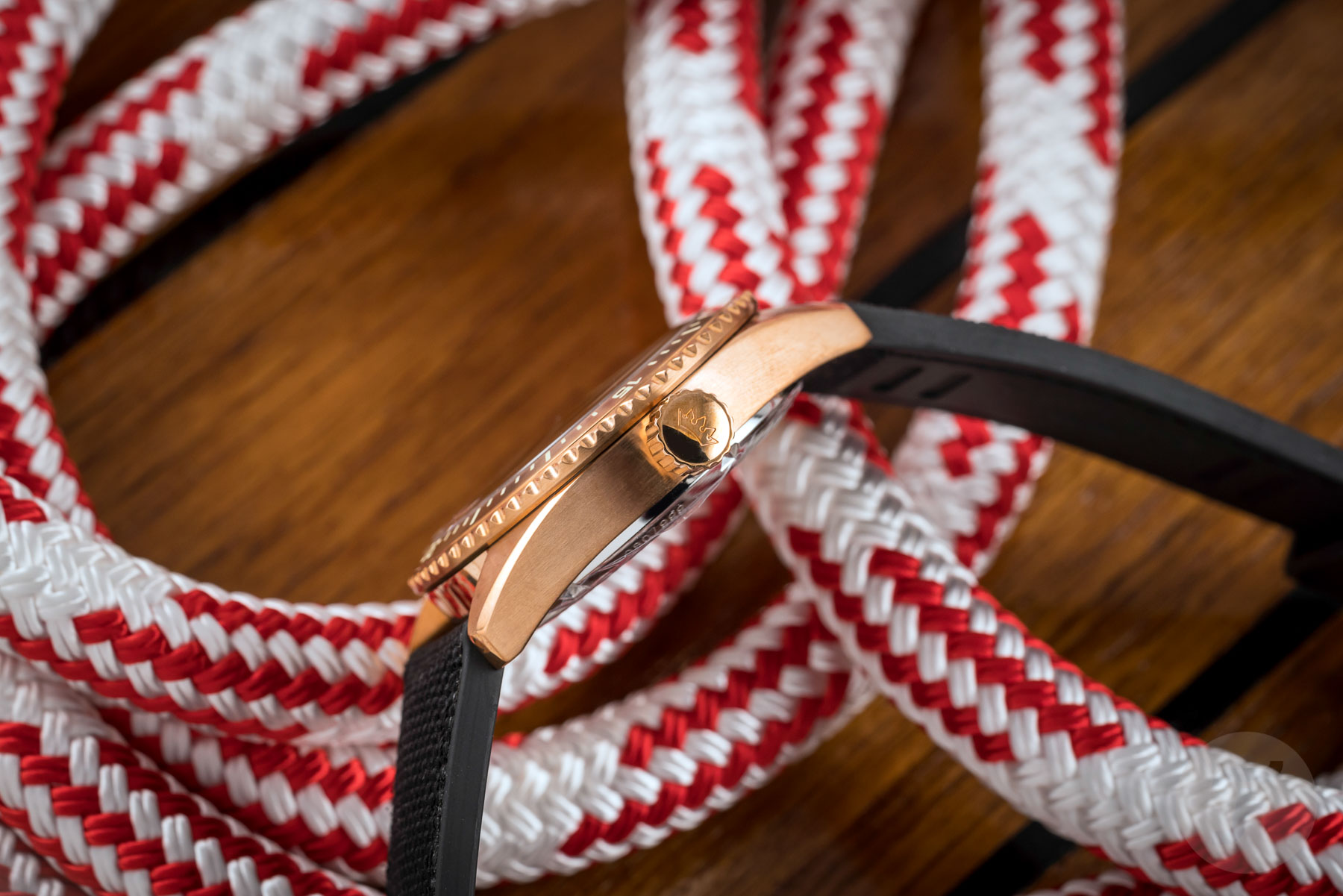 Bronze is an alloy. Its main ingredient (and the one that gives it its reddish tone) is copper (Cu). When it comes to watchmaking, brands tend to add either aluminum (Al) or tin (Sn) to the copper along with other ingredients to create a stable and machinable material. Technically (and if I’m wrong here, I hope some material experts will correct me in the comments), I believe aluminum bronze has higher tensile strength and supposedly withstands wear and corrosion better. Meanwhile, tin, which is far denser than aluminum, adds a bit more weight to the finished product and perhaps holds the fine finishing associated with watchmaking a little more elegantly than aluminum bronze. 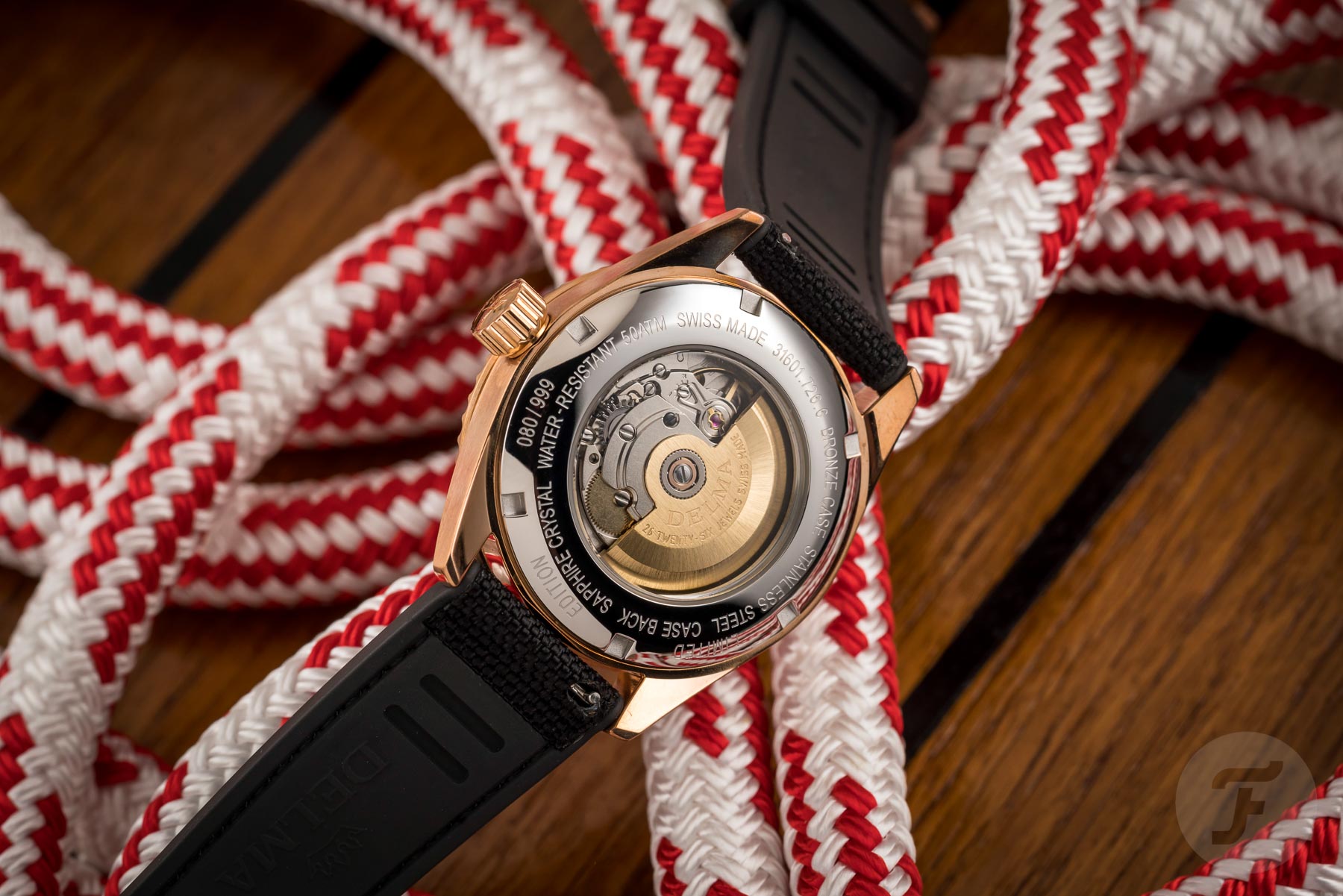 The biggest difference, however, is the color and how the materials age. Aluminum bronze is much brighter, more yellowy, and decidedly brassier in comparison to tin bronze. Tin bronze, on the other hand, is redder, browner, and patinas very evenly to attractive, muddier tones. Although that doesn’t sound particularly “luxurious”, the aging process of a bronze watch is part of the fun. Personally, I like my bronze watches to look like they’re been hauled off the seabed rather than spent years of hard labor in a factory in New Jersey. To me, you achieve the former with tin bronze and the latter with aluminum. 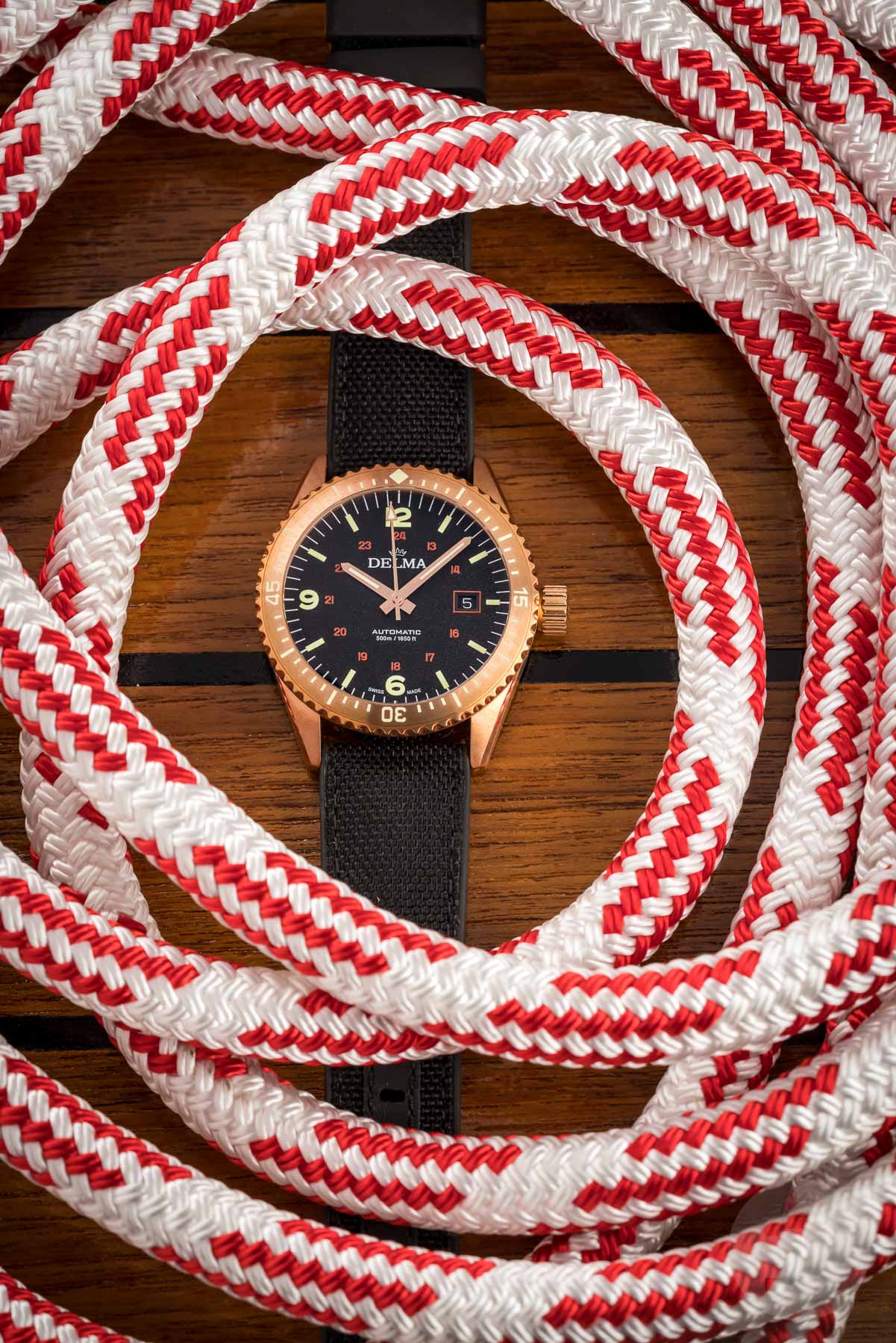 Where this model sits and fits

So this 42mm diver is of the tin variety. Its chemical composition is CuCn6, which means 6% of the alloy is tin. My absolute favorite type of bronze is actually CuSn8, which has a slightly higher note of tin. However, this composition results in a very handsome pinky tone right out of the box. It will age into a warmer brown with, presumably, less violent blooming (the flourishing of blueish or purple splotches on the bronze as it patinas) than a CuAl model.

Beneath the sapphire crystal, we can see a clear and legible dial. That’s something for which Delma, a brand that boasts a very solid history in the skin diver sphere (as Balazs explains in this recent article about the Oceanmaster Antarctica Special Edition), has become known. Standing 13.3mm tall on the wrist, this diver is not the slimmest, but neither is it gargantuan. Its compact lug-to-lug and rubber strap meant it felt well balanced on the wrist. An SW-200 movement winks at us through the otherwise stainless steel case back display window. 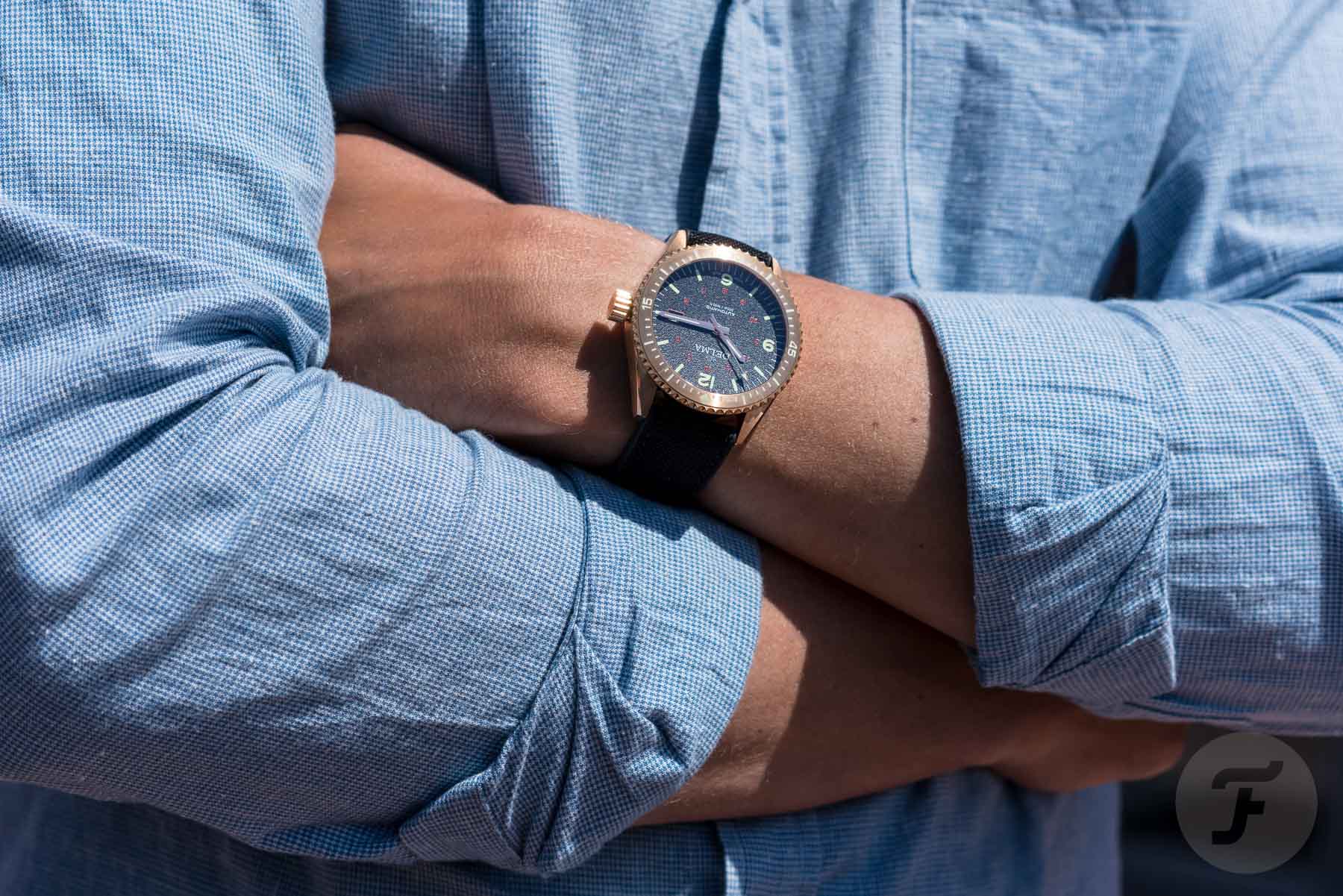 The Delma Cayman Bronze is offered in four dial colors — black, blue, Bordeaux/red, and green — and it retails for €1,490. But does the watch itself, branding aside, stand up to that price? Well, in keeping with my previous experience of the brand, I would say that the price is, at least materially, at the top end of fair. The movement may be a little pedestrian, but as a tool watch, it is a fine choice.

I think the main competition for this will be the Titoni Seascoper. That watch, with a more unusual caliber within it, is from a brand that has similar visibility in Europe, and both are doing their best to outgun the big boys in the price bracket by placing an emphasis on sharp machining. In that regard, the Delma Cayman Bronze does not disappoint, so I will say this: For just shy of 1,500 Euros, you’re getting a watch of sufficient quality. Only one question remains: do you like it more than the next diver on the list or not? Let us know your feelings in the comments below and for more information, check out the Delma website.