Blame it on my sharing nature while writing this story, but I fear my wife wants to remortgage the house. OK, I might be exaggerating a bit. But that is the Italian way, after all, and she’s from Milano. I am only wearing one ring (and a bracelet or three; call me metrosexual), but it is a B.zero1, and so is hers. Yes, Bulgari made our wedding rings, I didn’t really have a say in the matter. So I should have been more careful about sharing this watch. She’s smitten with it, and it’s all my own fault.

And you know what? Maybe she’s on to something. MB&F and Bvlgari just had a beautiful love child, and its name is the LM FlyingT Allegra. I am wearing a tool watch today, so I don’t know about you, but these pictures do something to me. I feel the need for a serious re-calibration of my horological senses, as the glimmering, domed visage has captivated me. 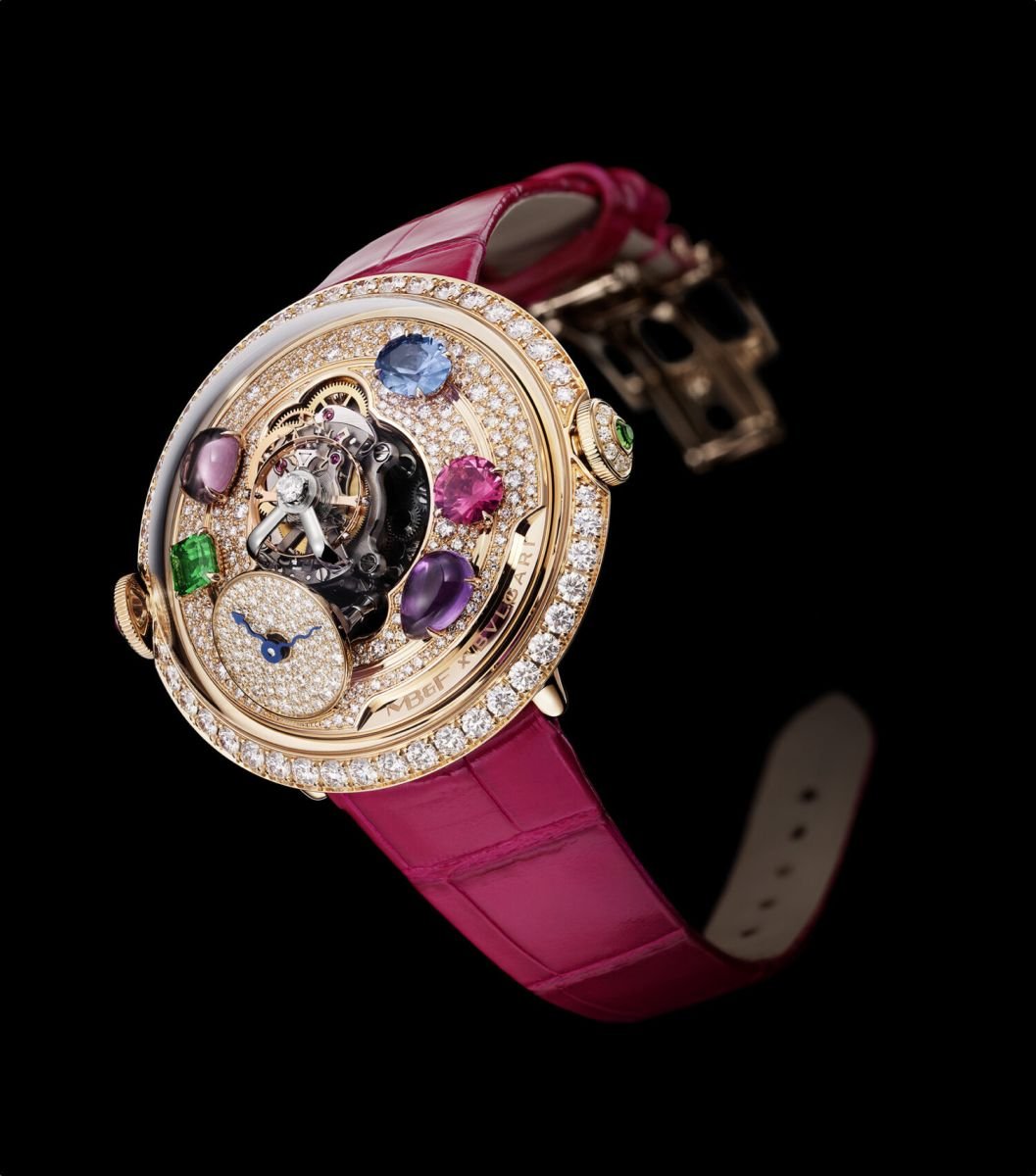 Bvlgari started life as Italy’s answer to Tiffany or Cartier, where heads-of-state and nobility would go for their select jewelry pieces. For some members of the #watchfam, the brand’s watches are still seen as a side gig (under what rock have they been hiding?). But even with the mildest form of watch addiction — in my case, the medicated kind — the Octo, Octo Finissimo, and Aluminium cool sports series have changed everything. The mind-boggling ease with which Bvlgari has elevated the Finissimo to multi-award-winning status is unique. But this is something very, very different. The Allegra series from Bvlgari is the gem-set pinnacle, on the thin line between haute horlogerie and haute joaillerie, with some delicious pieces released for Watches and Wonders earlier this year. 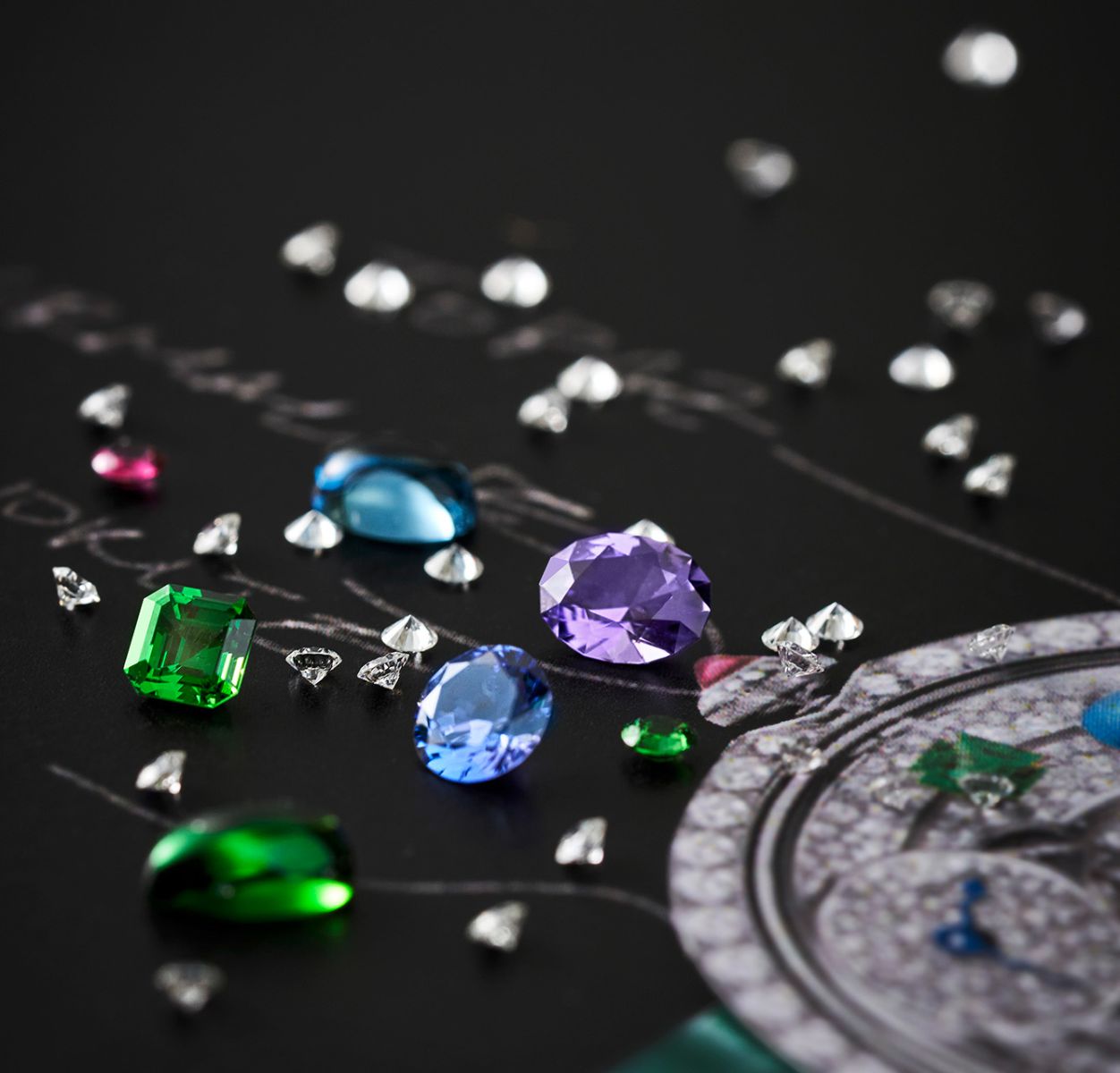 A marriage made in horological heaven, but for her wrist alone

For once, I can’t really desire a watch for myself, but I’m happy nonetheless. We all know that some smaller watches are still sold as ladieswear, and I’ll happily wear one for sheer comfort alone. But this? Not unless you are an artist like Tyler The Creator or have long enough cuffs to hide your personal pleasure. For these 20 limited pieces in pink or white gold, Bvlgari jewelers have carefully selected cabochon-cut precious stones. Tourmaline, tsavorite, diamonds, rubellite, amethyst, tanzanite, and topaz form a circle around the movement. The dial, paved with snow-set diamonds, will compete with the sun itself for attention. This one is for her, and deservedly so (is she standing behind me now?), but that shape isn’t from Bvlgari, is it? No, this is the rather splendid LM FlyingT, one of the most delectable collabs this year. It’s a glittering lovechild, sharing half of its genes with Max Büsser and Friends. 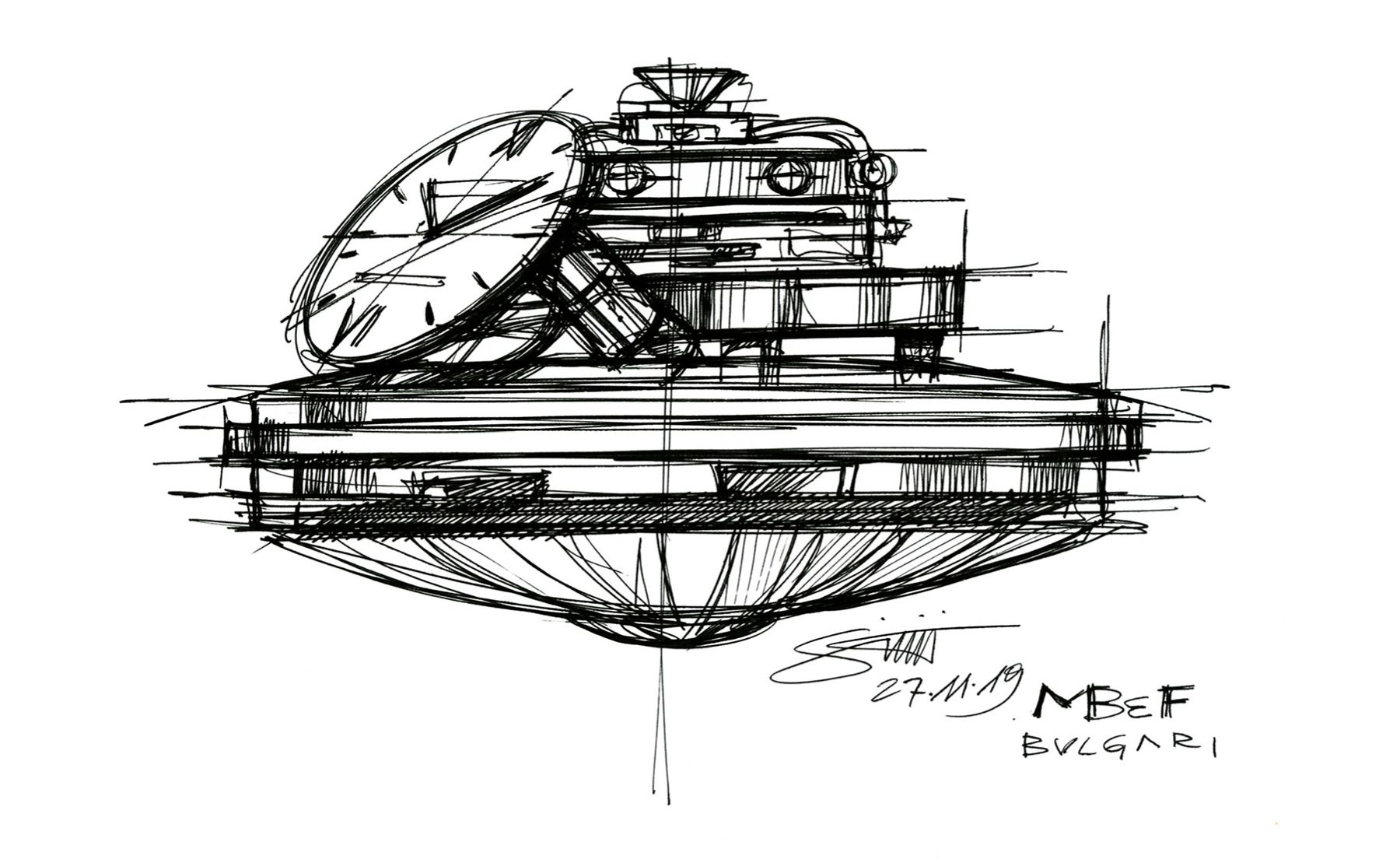 Whichever variant you choose, the MB&F × Bvlgari LM FlyingT Allegra is a stunner. In either white or rose gold, this release is a double whammy. It simultaneously underlines the intricate possibilities of Bvlgari’s gem-setting knowledge and re-imagines the already standard-setting qualities of the Legacy Machine FlyingT. This is not the first time we have seen an MB&F flying tourbillon as part of a horological marriage. Do you remember the abyss-like depths of the H. Moser × MB&F version from last year? On its own, the FlyingT will stop you in your tracks. With this one, however, you will need sunglasses. Forget about “stealth wealth” and all that. Come on, let’s just celebrate! Imagine actually being near the end of these two years of lockdowns and quiet contemplation of life. What we need now is pure, colorful, and dazzling maximalism, not monochrome solitude. 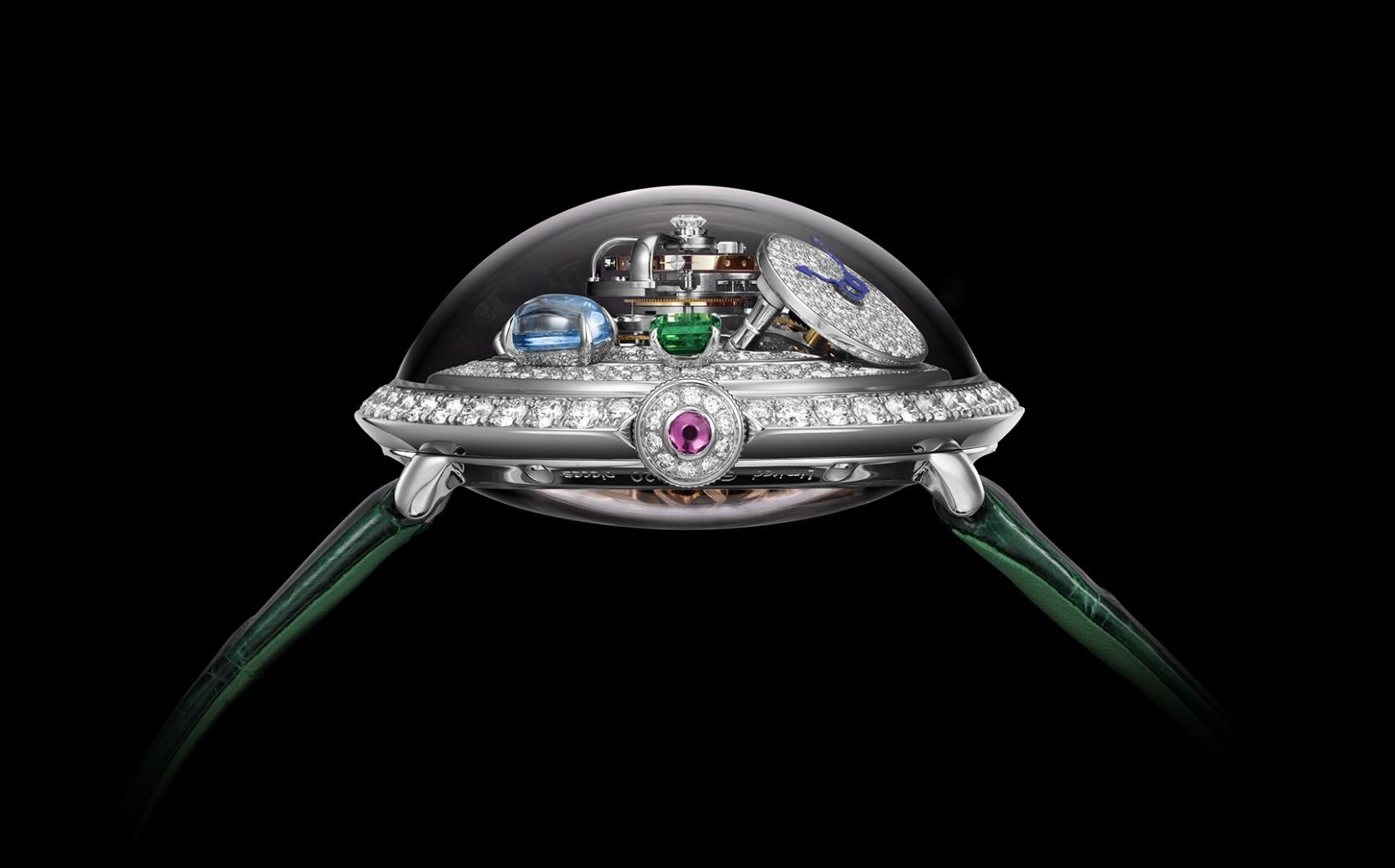 The #watchfemme zeitgeist is important, and non-gender-specific marketing is a good thing. But let’s make this piece a beautifully focused exception. The MB&F × Bvlgari LM FlyingT Allegra is a precious celebration of femininity. I might even be tempted to wear it myself, surreptitiously hidden under a dark navy merino jumper, sneaking glances at it like an illicit affair. My wife, however, would love wearing this magical, large-domed beauty prominently on her wrist. A soft alligator strap with a butterfly clasp holds the almost zero-lugged watch on the wrist, and yes, it does actually show the time. But do we care? Maybe not. Nevertheless, the time-telling aspect is eminently practical, with an inclined dial effortlessly available with only a slight flick of the wrist. 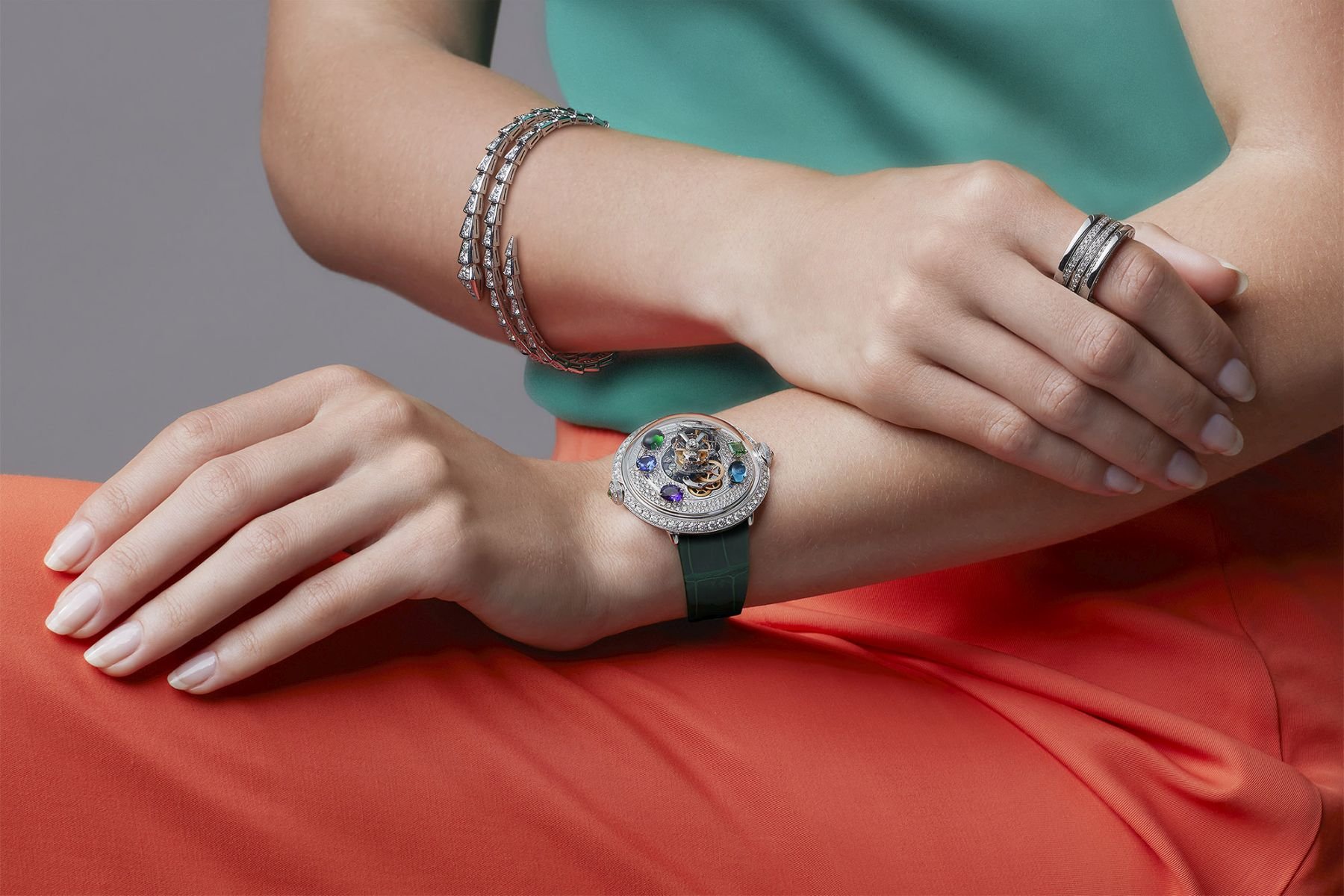 A medium-sized 39mm ensures comfort with almost non-existent lugs. But the height? A whopping 20 millimeters of dome negates any long-sleeved apparel. But seriously, the MB&F × Bvlgari LM FlyingT Allegra deserves to show off its horological theatre. And my earlier philosophical meanderings aside, the technical aspects of the FlyingT are a complex delight. The movement is vertically built along a central axis orchestrating the overall architecture of the entire visible mechanism. 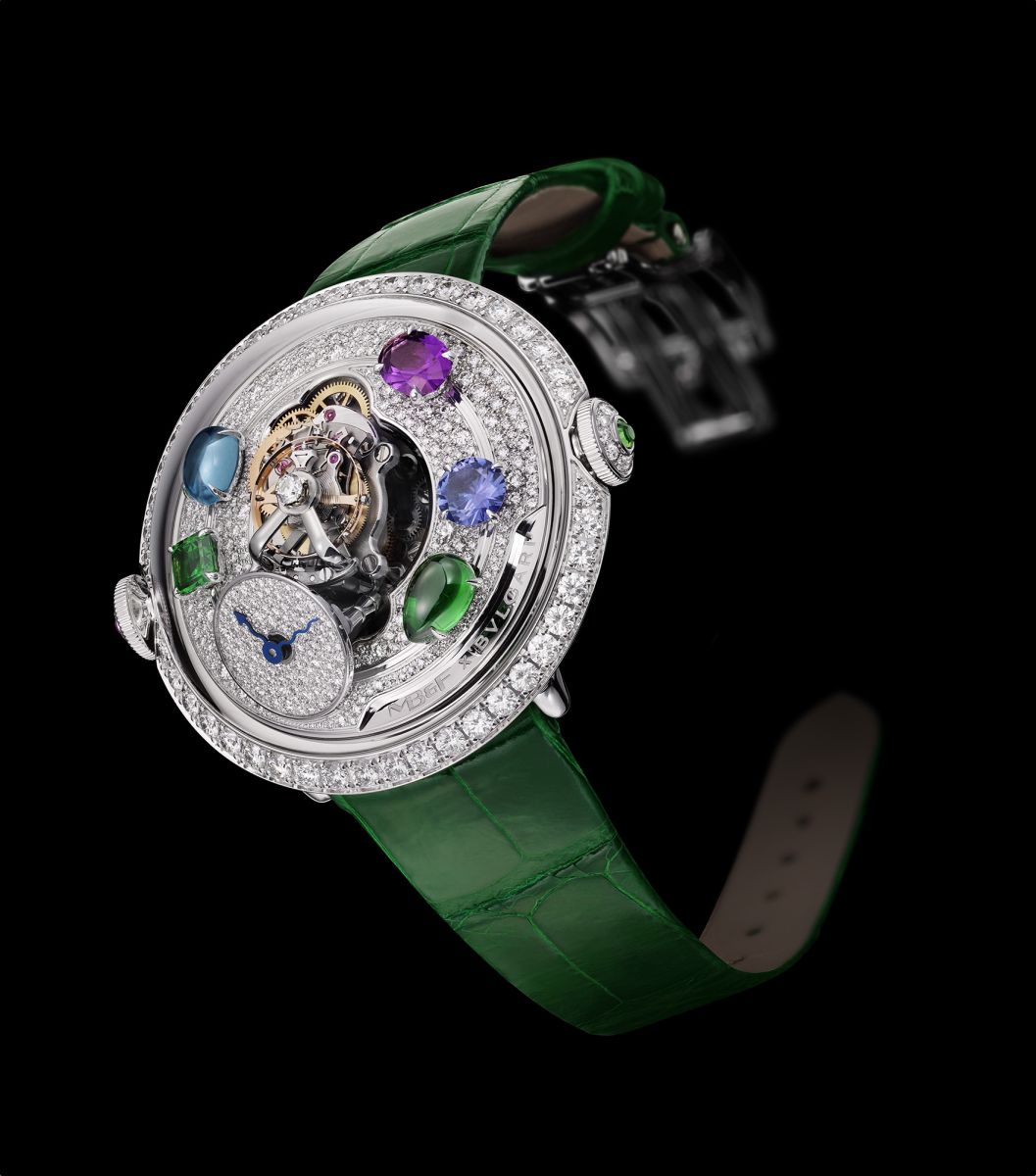 The upper end of the axis carries the diamond-set flying tourbillon and the balance. What is this, if not horological theater? It’s a lit stage on which the dial is set at a 50-degree angle, precisely defined so that the wearer alone can view the time. To make this work on an inclined dial, conical gears transmit torque from one plane to another. The 280-component caliber has a very solid 100 hours of power reserve. And the price? At CHF 160,000 before VAT, an investment in sparkly joy might still be OK. We are nearing the peak of a property bubble here in Norway, so why not take advantage of it?