It has been four years since I last saw this chronograph without pushers listed in an auction. Although I won the auction in 2018, I never received the watch. The fascinating Nicolet Landeron 251 movement thus became even more elusive. And I became even more committed to finding it…

Every few weeks since 2018, I’ve dug through eBay, Google, Yahoo, or you-name-it-listings in my routine check-in on the Nicolet Landeron 251. Not a single result. Nothing. Zero. Nill. I am moderate in my use of the term “rare”, but this watch is truly super rare. Many dealers claim this or that watch is rare, but they appear at least from time to time at big auction houses and are hammered for skyrocketing prices. This is not the case for watches with the Landeron 251 caliber, which most collectors haven’t even heard of yet. 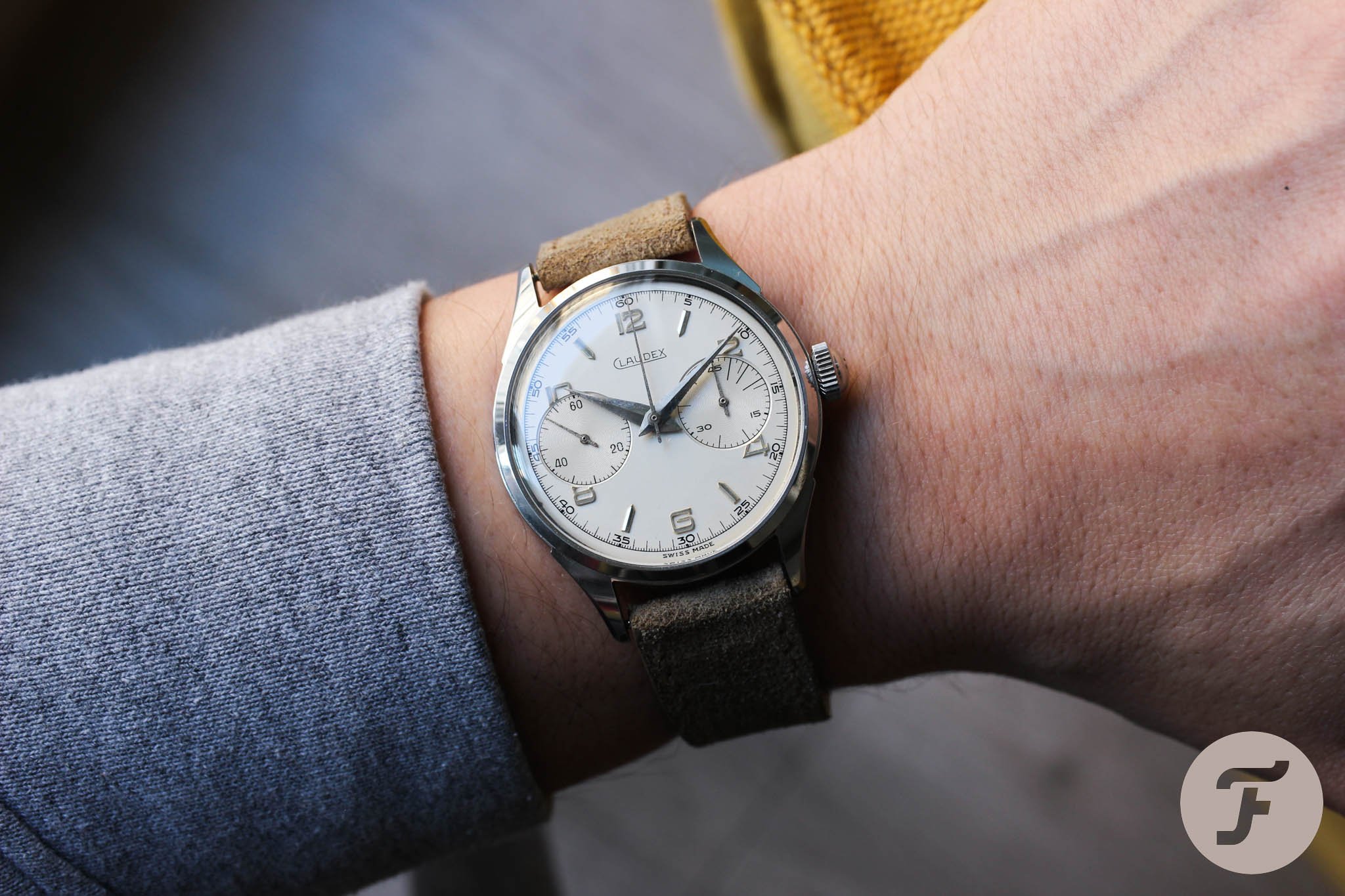 A few weeks ago, I did my regular Landeron 251 “round” and found a new Google result that I hadn’t seen before. I found a Claudex no-pusher chronograph with the Landeron 251 listed by a Dutch dealer. I instantly messaged him, only to learn that he’d sold it a week prior to someone in Spain. You can imagine how super angry I was that I had missed it.

Yet, I did something that I had only done once before. I asked the dealer to contact the buyer and try to buy it out for me. While it worked for me in my first attempt a few years ago, this time, the buyer didn’t respond to the offer. Hurt and sad like an abandoned puppy, I went back to the old routine of searching Google every few days. To my greatest surprise, I found the very same Claudex chronograph listed by a Spanish dealer. I had not expected to see it ever again. I would have bet that it went into some fine private watch collection. 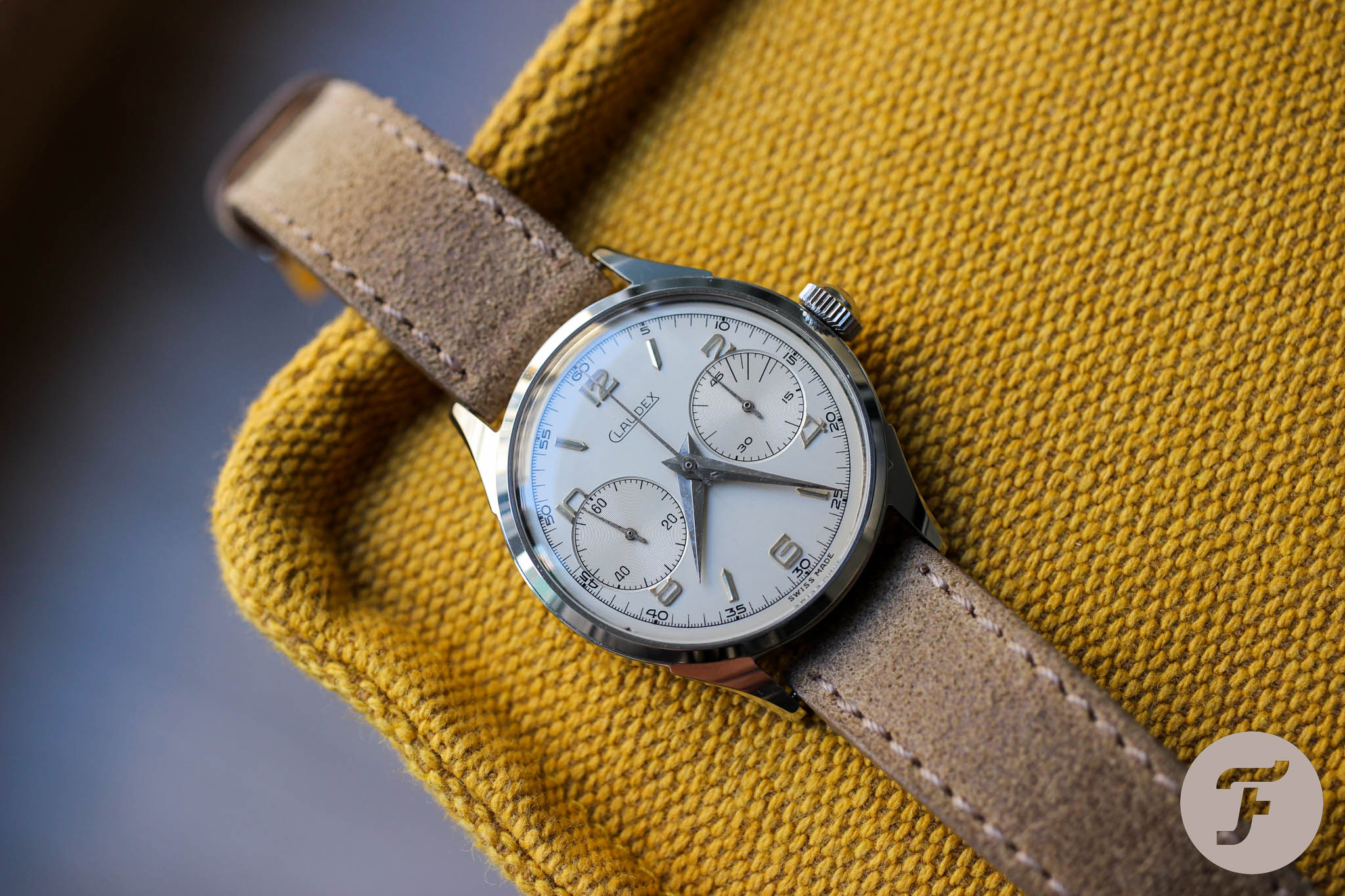 The only problem was the price tag, as the dealer had priced it at almost three times what he had paid. If I hadn’t known that he got it for €1,200, I wouldn’t have hesitated to buy for it a moment. But I had a huge problem paying €3,000 for something I could have had for one-third of the price a few days ago. “It was posted on our site in May 2021. We never had any reaction to it, as probably no one knows this watch,” explained the Dutch dealer, John.

I calmed down over the next few days. It’s part of the game, right? Sometimes I’m the lucky one, and other times, it’s someone else. So while the rest of the watch world was flipping MoonSwatches, one well-educated dealer made €2,000 on a watch 99% of collectors have never heard of. If I were feeling cheeky, I would say that my decision to buy the Claudex definitely disrupted the Landeron 251 prices.

I’d been trying to chase down a Landeron 251 for years. The last time I’d seen one pop up was in April 2018. Do the math. That’s four years of nothing. Back then, I even won the auction and the French dealer allegedly sent it. I got the tracking number, but the watch never left France. The dealer was not really responsive and claimed repeatedly that the watch was sent. It never reached me despite five or six weeks of waiting. In the end, I was lucky I was protected by the auction site, which refunded me fully. That was another reason why I had to buy the Claudex, regardless of the price tag. I realized I was not ready to wait another four years for the next Landeron 251 to pop up. During those few days of thinking, I realized that the Landeron 251 really sat on the top of my wishlist. Not to mention, this one cased under the Claudex brand is almost minty. 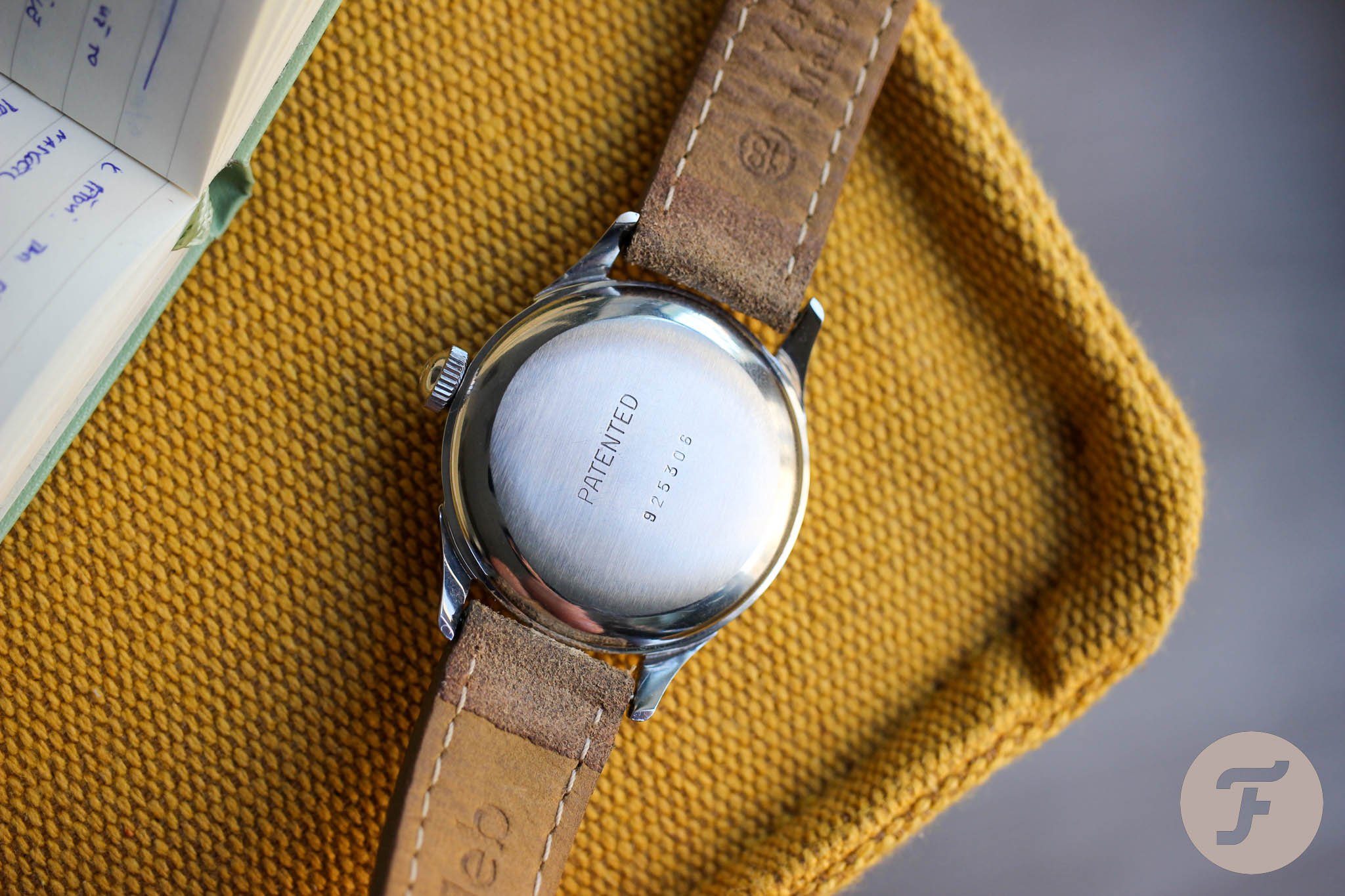 I admit that the idea of a chronograph without pushers sounds equally ridiculous as a car with no wheels. But there was some common sense when Nicolet first introduced its no-pusher chronograph to the market in 1955. The idea was pretty simple — to minimize the penetration of dust and dampness into the watch case through the pusher gaskets.

Until I bought my Landeron 251, I had never tried one with my own hands, let alone even seen one in real life. Using a chronograph, however, is quite a sensational moment for me. I used to study every aspect, from the sound and the pressure to the length and response of the pushers upon use. For years, I was imagining what it would be like to start the chronograph by turning the crown backward. I could not imagine stopping it by turning it the forward or resetting it to zero with another turn in the same direction. 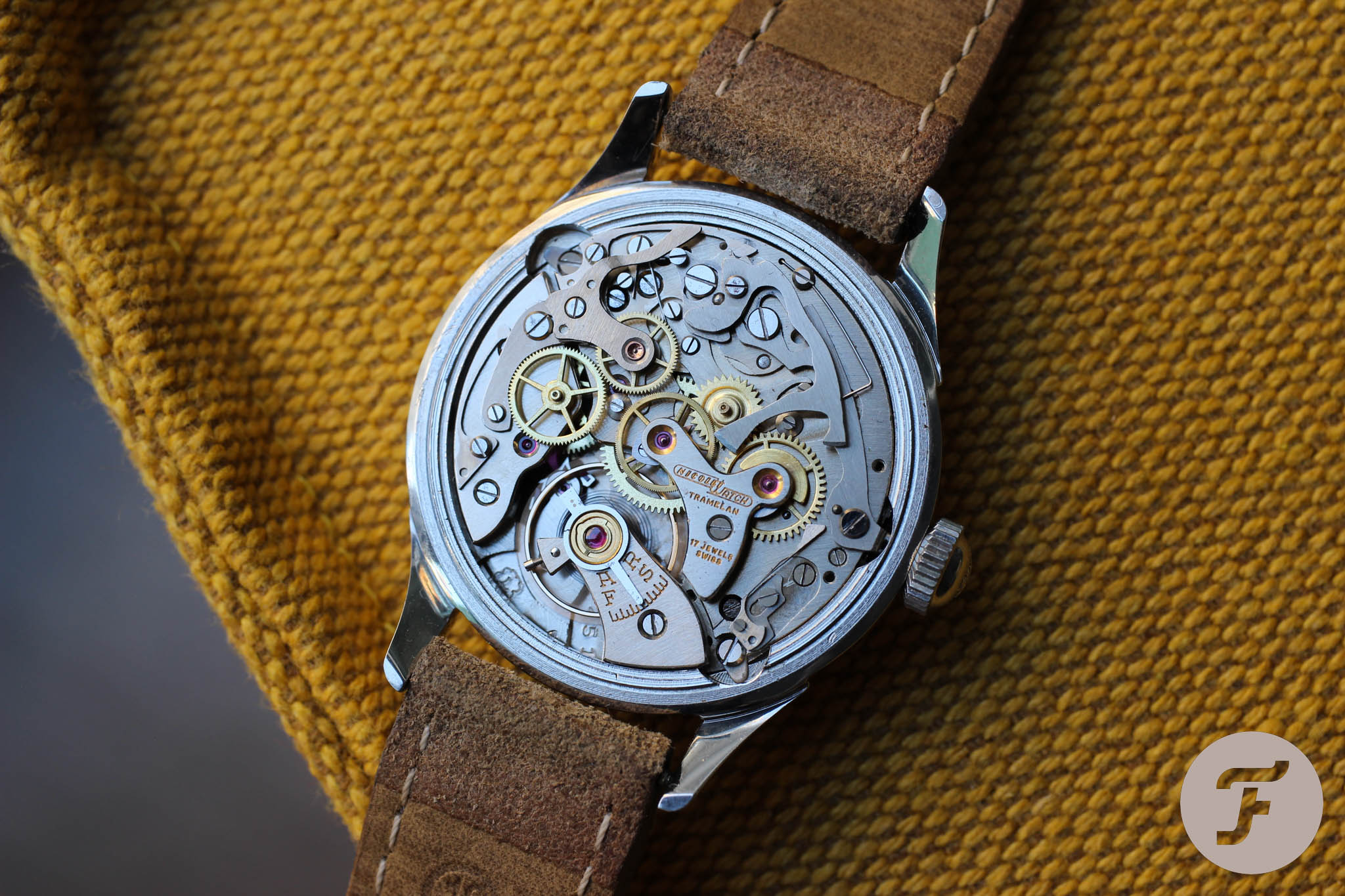 The base movement itself is no mechanical wonder. The Landeron 251 is built on top of the basic 248 caliber, which is a movement you don’t get very excited about when you find it in any chronograph. But to see a central chrono hand and a minute counter without a pusher completely redefines the rules.

The “hat-shaped” Nicolet crown is easy to grab. Don’t expect it to be a real turn, like a watch-winding kind of turn. You just need to apply light pressure backward to make the crown click, and the central chronograph hand will start running. I am not sure what the sensation is like on worn pieces, but on my NOS example, it’s short and precise, like a switch.

The movement forward to stop the chrono reminds me more of a turn than a click. The crown gives way more counterpressure, so you really need to turn it a bit. Once the chronograph stops, you will feel the crown moving back a bit to its initial position. If you want to reset the chronograph, you need to turn it forward once more. When doing so, I feel I have to make an even longer turn with similar pressure applied.

Honestly, I don’t know what I expected as I could not even imagine it working. Now I can tell you it’s simply genius. It’s not shaggy, wobbly, or random like shifting in a beaten VW Golf from 1983. On the contrary, it’s short, precise, and surprisingly solid. I am not afraid I will break something or that the chrono will start running unintentionally anytime I touch the crown. 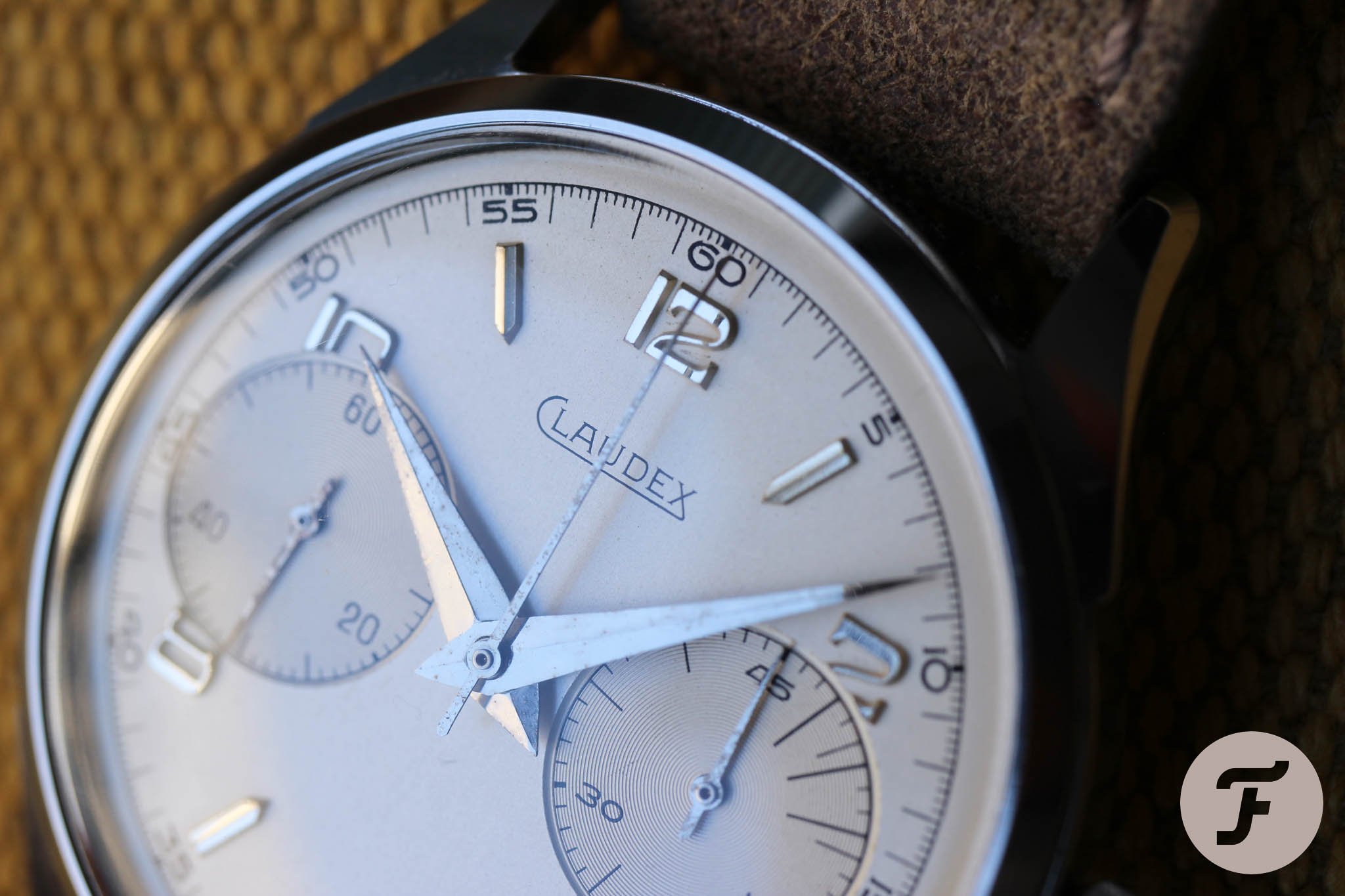 Are there any drawbacks? Well, once you stop the chronograph, you can’t start it again without resetting it. That’s definitely a significant detail, but not a big deal for me. Winding the watch is quite an experience as well. Usually, you have to pull out the crown into the first position to set the hands. Here, you have to do it to wind the watch. It’s the most romantic demolition of a watch stereotype I have seen in years. If you pop the crown to the next position, you are allowed to set the time.

Are you a bit confused about what the relationship between Nicolet, the Landeron 251, and Claudex is? Landeron was the movement producer, and my understanding is that Nicolet did the rest. Nicolet even licensed it and branded it for others. Besides the Claudex, I also found this exact dial style with the Nicolet-signed crown branded as Sapho, or even more bizarre, a watch branded BKM. Don’t ask me any more about Claudex. Not even Mikrolisk.de has any records on it. And Mikrolisk has quite a lot of records, if you know what I mean…

Nicolet had multiple designs of its no-pusher chronograph, and they were available in gold-plated, steel, and gold cases. I was surprised to learn in Joel Pynson’s & Sébastien Chaulmontet’s book that it remained in the Nicolet product range for more than 15 years. Judging by the rarity of the watch, I can hardly understand that. Where are they all? There are none. Or all of them already sit in private collections with minimal sales that take place outside the typical channels. My guess is that these watches only trade face-to-face between more quirky and well-educated collectors. 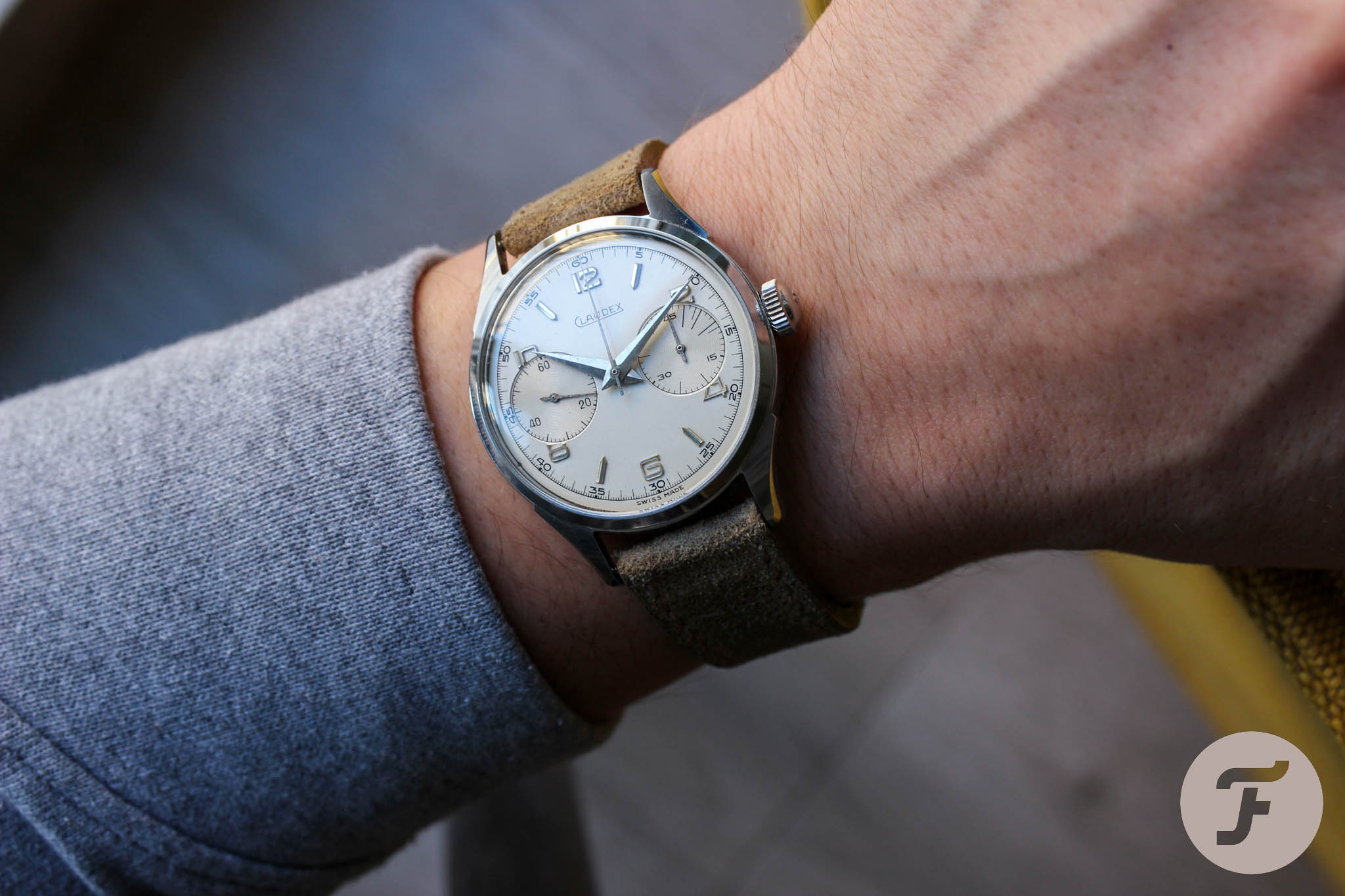 I have many watches. I have many weirdo and bizarre watches with unusual complications. Often, it’s just the complication that makes them “nice”. But the Claudex is really special. All steel with a 38mm case diameter, uniquely designed indexes, and almost big-eye sub-registers, the Claudex no-pusher chronograph is one hell of a dresser. Its wrist presence and style are quite “highborn”. No kidding, I already know that this one will hold a special place in my collection and enjoy a lot of wrist time. 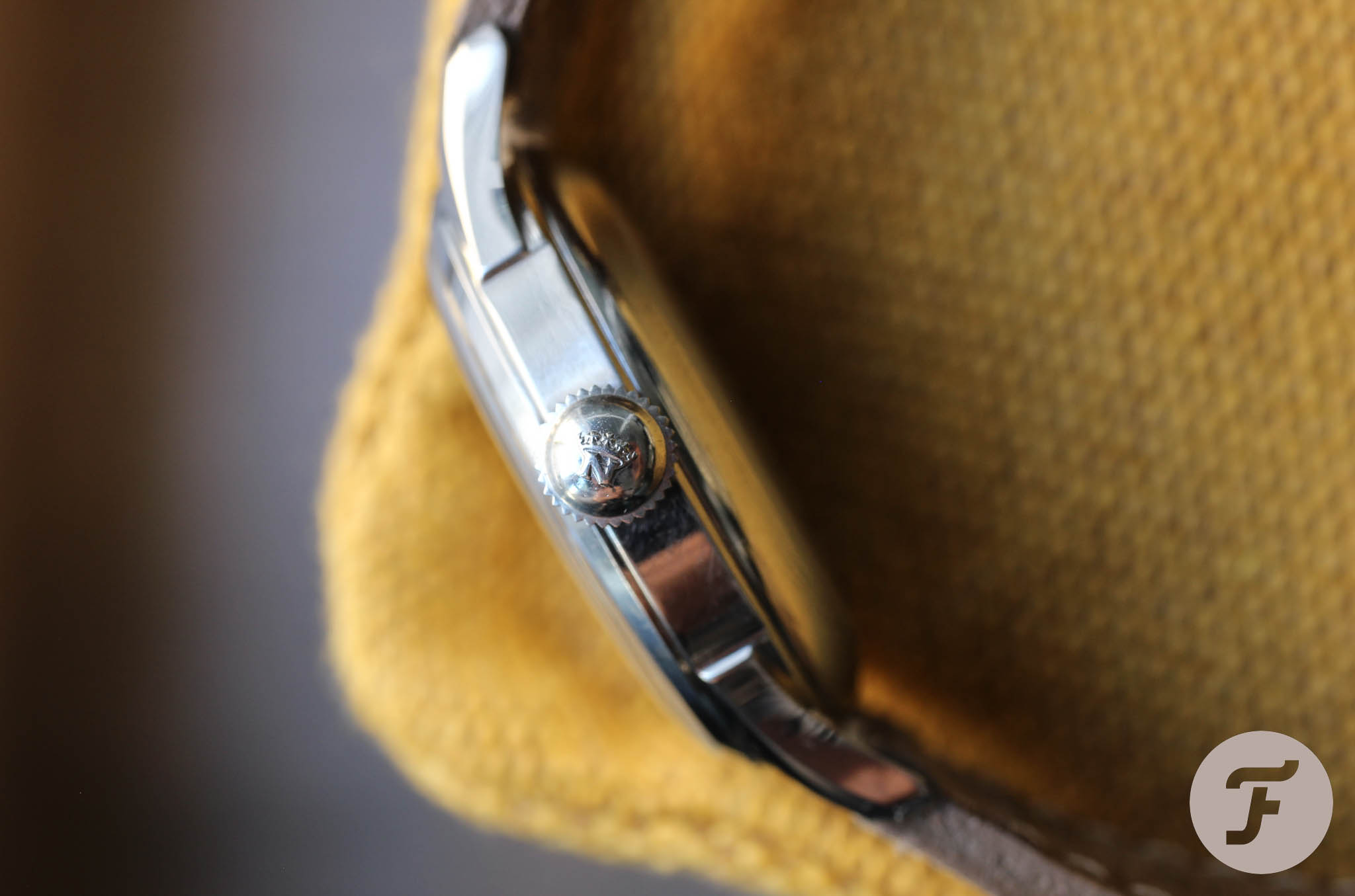 Finding a special complication is always amusing. Consider my latest $100 Avia Ajustor, my few-thousand-euro Mido Radiotime, or many others featured on #TBT. For collectors hunting highly regarded chronographs, they all might look and sound irrelevant.

But the Landeron 251 is completely different. First of all, it’s a beautiful chronograph. Second of all, it embodies a mind-blowing idea that redefines the standard. And to my greatest surprise, it even works magically. And what’s most important, it’s so rare, you probably have to equip yourself with years of patience to get one.

If you are not up for waiting that long, there is also a modern alternative. Maria and Richard Habring are great admirers of Nicolet’s no-pusher chronograph. “Our COS took inspiration from the Nicolet without sharing its weak points,” says Richard. For those interested, here you can find some technical documentation for the vintage role model patented by Nicolet. Happy hunting.

Hot Topics
Introducing: The Omega Speedmaster Super Racing With Spirate System
165 comments
New Release: The Limited-Edition Seiko Prospex SLA067J1 Diver
65 comments
My Predictions For New Omega Speedmasters In 2023
60 comments
The Best Independent/Microbrand Alternatives To The Rolex Explorer In 2023
53 comments
The Time To Buy Is Now: How The Current Economic Climate Influences Watch Buying And How You Should React
51 comments
Popular
You Asked Us: Rolex Submariner vs Omega Seamaster
Robert-Jan Broer
25
Why Are There No Stainless Steel Rolex Watches Available?
Robert-Jan Broer
121
You Asked Us: Rolex or Tudor
Gerard Nijenbrinks
9