Omega Genève Dynamic watches from the ’70s are fun, exciting and still very much under the radar.

Mind you; it’s not an easy task to search for Omega Dynamics on the web. The brand released various models at a different point in time, all under the name; Dynamic. Most of you probably remember the latest Dynamics (III) that first came out around 1995. It went on to a few years with the last model (a Targa Florio edition) coming out in 1999 if I’m correct. You had time-only and chronograph version, with large pump pushers and vintage-style dials. They came in a capsule; collectors often refer to as the “tin can”. I have to say, while those watches are not everyone’s favourite, they represent excellent value for money. Before that, in the 80s, came the Seamaster Dynamic II. Less successful, with a quartz movement and somewhat quirky looks. However, the models I’m about to review are even older than that. Let’s go back to the 60s. 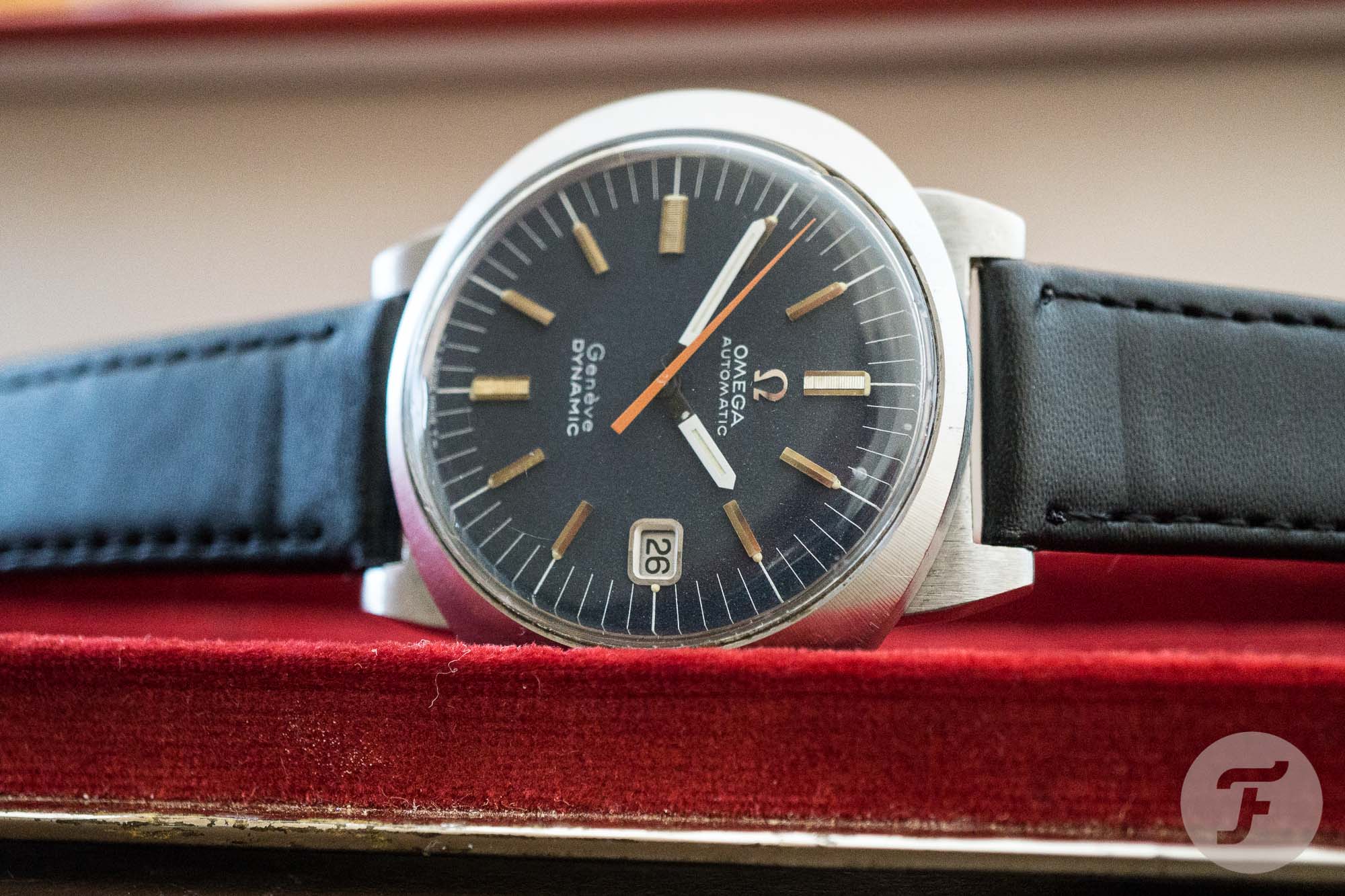 The Omega Genève Dynamic watches were created in 1967 and launched to the public in 1968. The designer of the collection was Raymond Thévenaz. The name, Dynamic, refers to the shape of the case, which was the result of an in-depth study of the anatomy of the wrist. Thévenaz wanted to create a timepiece that sits on the wrist comfortably. For this, creating the Dynamic meant different tricks and tweaks. The line became a success and went on several years. Omega still released newer Dynamic models in 1977, eight years after the first watches came to the market. It’s also worth mentioning that while the very first Dynamic models were incorporated into the Genève line, somewhere in the 1970s, Omega rebranded them to De Villes. The looks also received an update then. 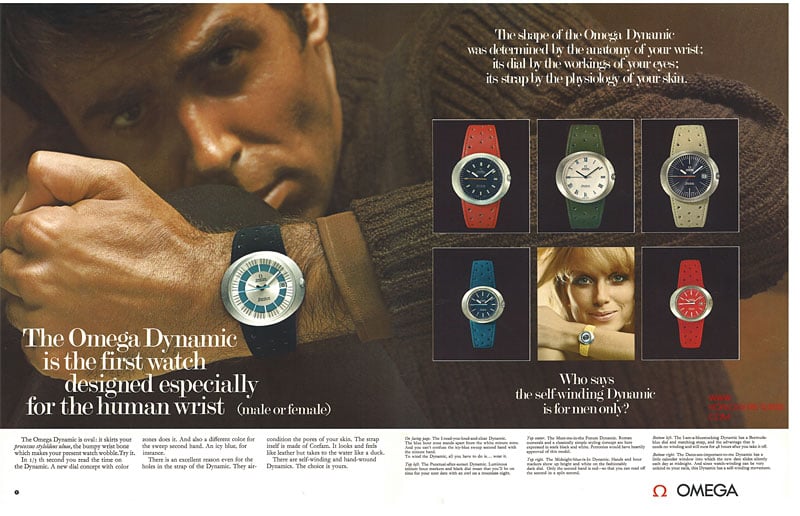 As I mentioned above, the core idea behind the Dynamic was to create a watch that fits the human wrist anatomically as much as possible. For this, several changes had to be made with the case of the watch. First and foremost, the shape. What makes the Genève Dynamic so distinct is the architecture of the case and the strap. While the case shape is an ellipse, the dial and the movement are round. Fernando Fontana (Sesto Calende), an Italian case maker is responsible for the production of the housing. They had sunburst finish on the top and linear brushed finish on the bottom. The crown’s integration into the watch body’s side makes the piece much more aerodynamical. Dynamic. Get it? It’s worth mentioning that the watch was water-resistant to 30m, thanks to its hermetically sealed crystal and Unicoc (or Monocoque) case.

This means that the case back is solid; you can only have access to the movement from the dial side. Trained watchmakers can open the watch, but it is not easy. One needs to pull out the crown and remove it entirely with the stem. Then, while securing the crystal, one needs to blow high-pressure air into the crown tube. This will pop the crystal off, and you can remove the movement – with the dial and hands. This is something most of us won’t be able to do at home. So, photographing, adjusting or even just looking at the Dynamic’s movement requires a trained watchmaker. Another fun feature of the case is the ring on the back. I will talk about this in greater length below when I take a look at the strap. It’s a quick-change system that allows you to swap bracelets in no time. 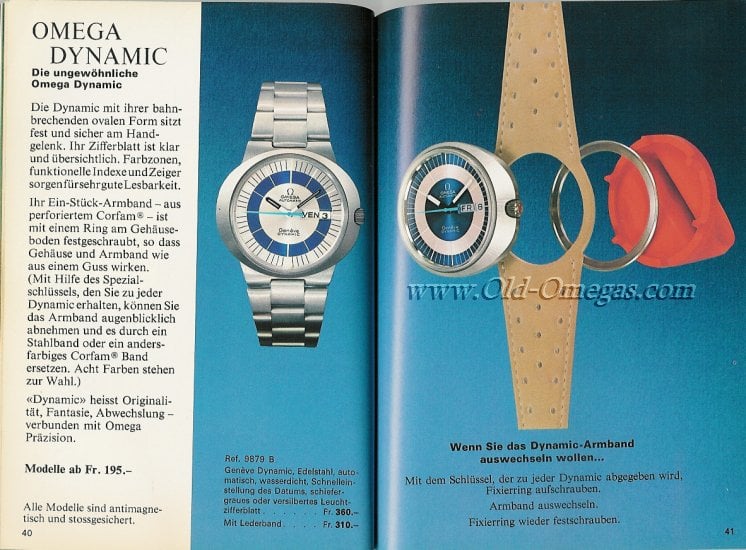 A page from a vintage Omega catalogue – photo credit: www.old-omegas.com

The usability that was so important when designing the Dynamic continues with the dial. Some of the models had plain dark dials, just like my example. These are usually the earlier, ~1969 models. But Omega fans who know the Genève Dynamics also notice that the most common dial version is the two-tone. Here, we have two contrasting colours (usually white + navy blue) and three segments. The other ring, the contrasting inner ring and the middle of the dial. The “time zones” as Omega calls each section between two hours are marked with long painted indexes that divide the dial, creating clear partitions for each hour. My dial is an earlier version with a dark grey/black base colour, applied metal indexes, and Omega logo. The branding is below the logo under the 12. While the model name is just above the 6. On 2-tone dials the logo is painted. 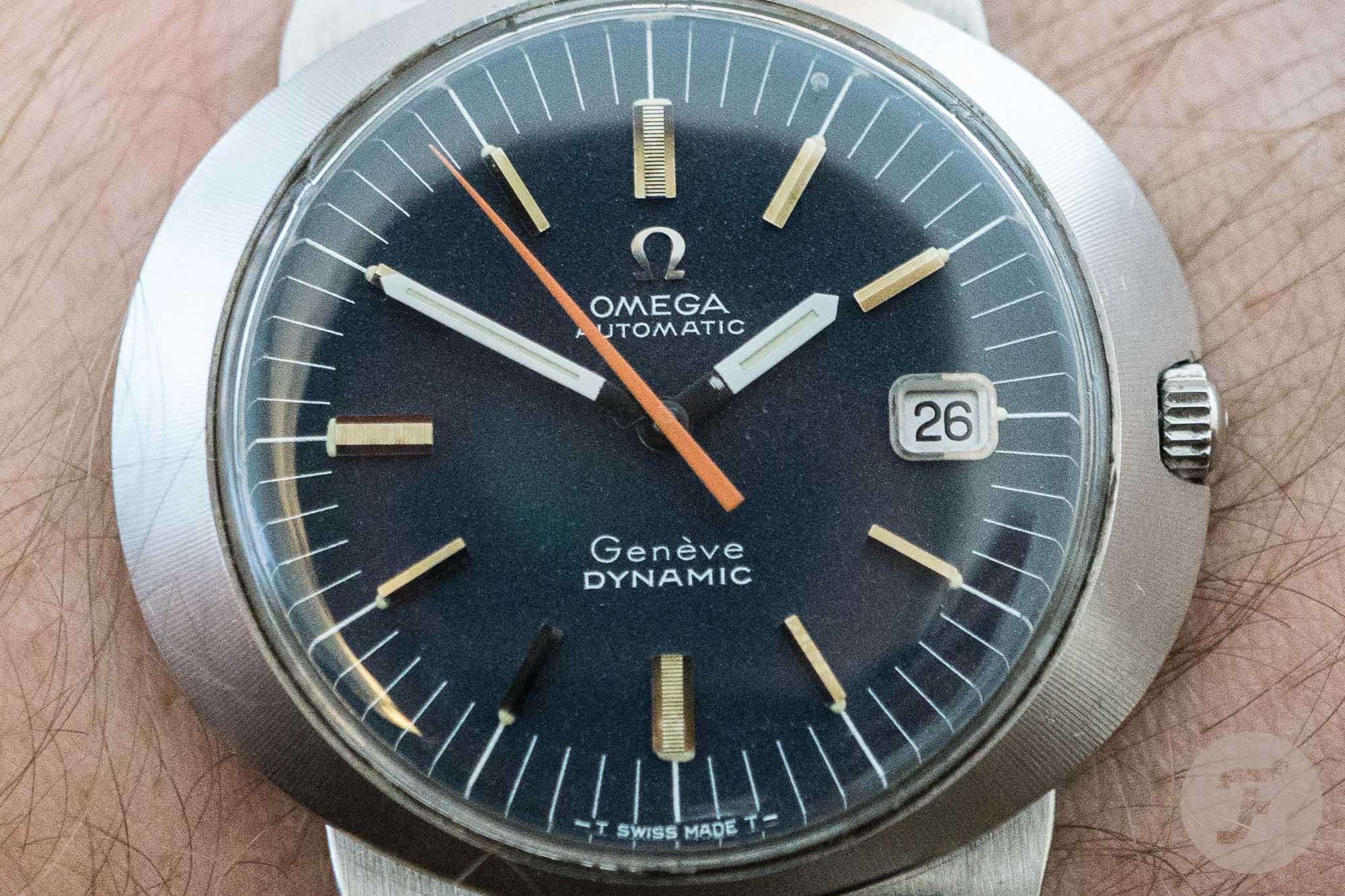 One interesting thing worth mentioning when talking about the Omega Genève Dynamic is the free and broad usage of calibers in them. During my research, I came across a dozen different calibers that, at one point in time, Omega built into these marvellous little machines. While the calibers vary from 3-digit to later 4-digit 10XX movements, the fundamentals of the watch in terms of their looks never really changed. So, it is possible to have two timepieces next to each other than more or less look the same. One would have a cal. 552 the other a cal. 1481. Of course, most of the movements were automatic, but in some cases, you can find a Dynamic with a hand-wound 601 movement (ST 135.0033). Also, some models had no date; others had a day-date function or only a date aperture. See, they’re starting to look more distinct. 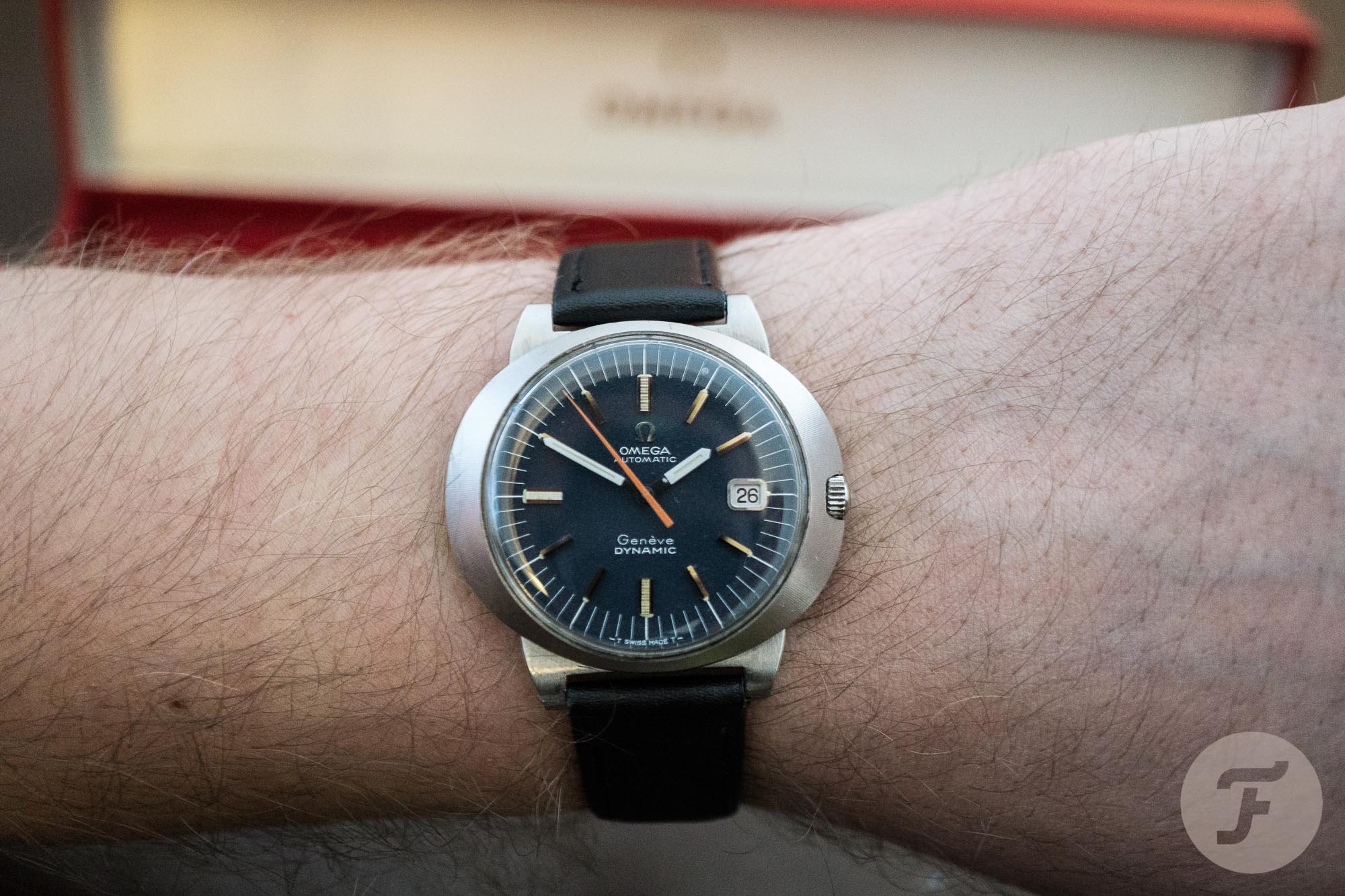 The Dynamic was designed to be worn with a bracelet or a strap where the owner can screw the ring off of the case back that holds the bracelet in place. Pop the case out and put on, let’s say, a leather strap. Then the ring goes back on, and you’re good to go. I need to mention that unless you have a case back tool, you are not going to be able to swap between straps. Lest you don’t mind scratching the back while screwing the ring off with, let’s say, a tweezer. Please don’t do it, though. Back in the days, Omega would supply a little red plastic tool to help you with that. Nowadays, they are super rare to find. Anyone with some design skills and a 3D printer could make a great side business printing these. 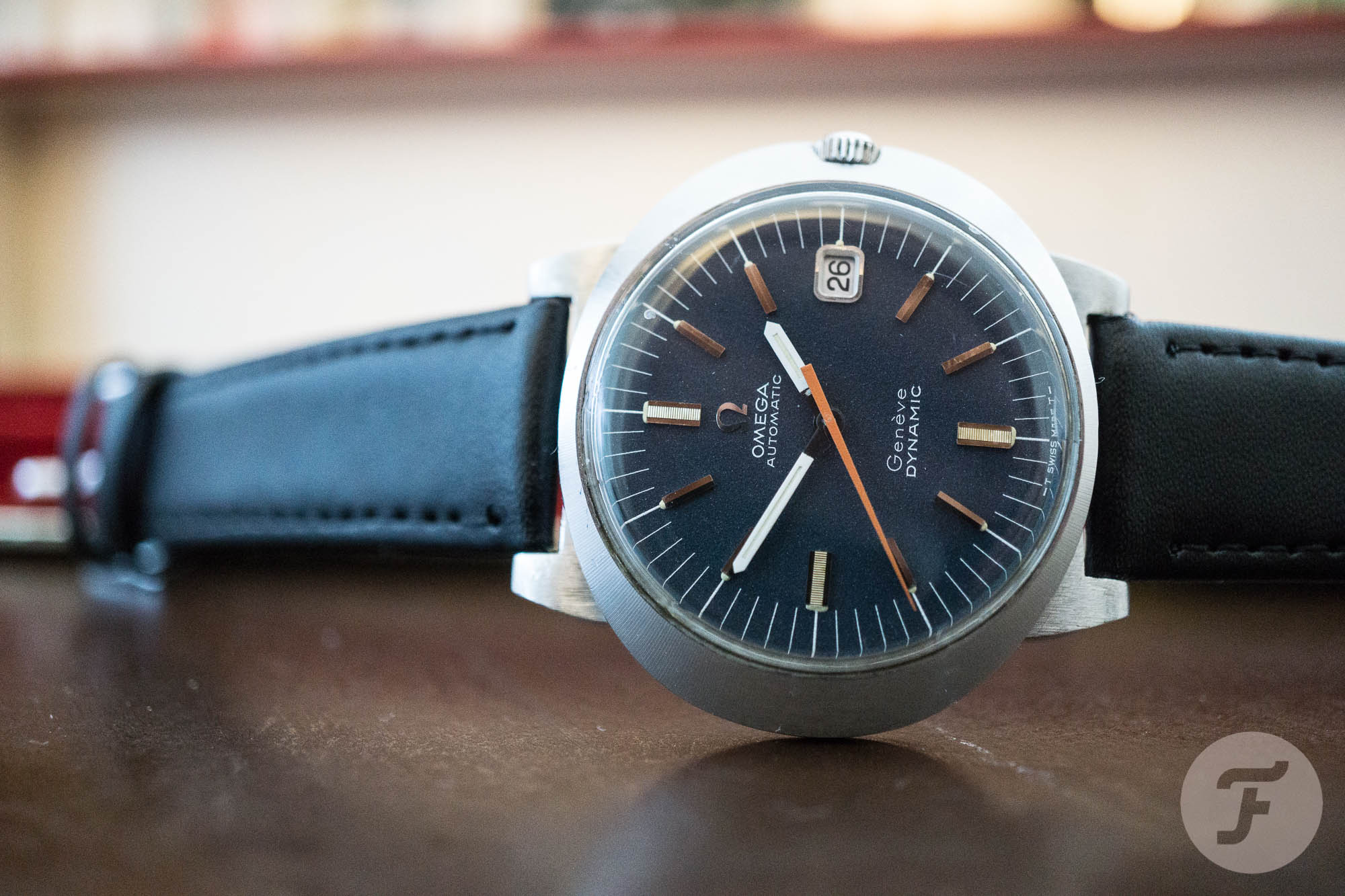 But getting an ok-ish case back opener that does the job won’t set you back more than €20. There are three types of straps/bracelets one could buy with their Genève Dynamic. The simplest option was a bracelet where an integrated metal ring connected the two bracelet parts. The watch case would sit in this O-ring then the ring that secures the bracelet to the case comes to the back and done. If you wanted a leather on it, and Omega offered many in various colours that were also not a problem. These were not real leather, rather Corfam – a synthetical leather-like material that the brand often used in the ’60s and ’70s. It’s a one-piece strap, again with the ring in the middle, perforated with tiny holes for more comfortable wearing and Omega steel buckle. A third lesser-known option was the strap ring. This is what I have. 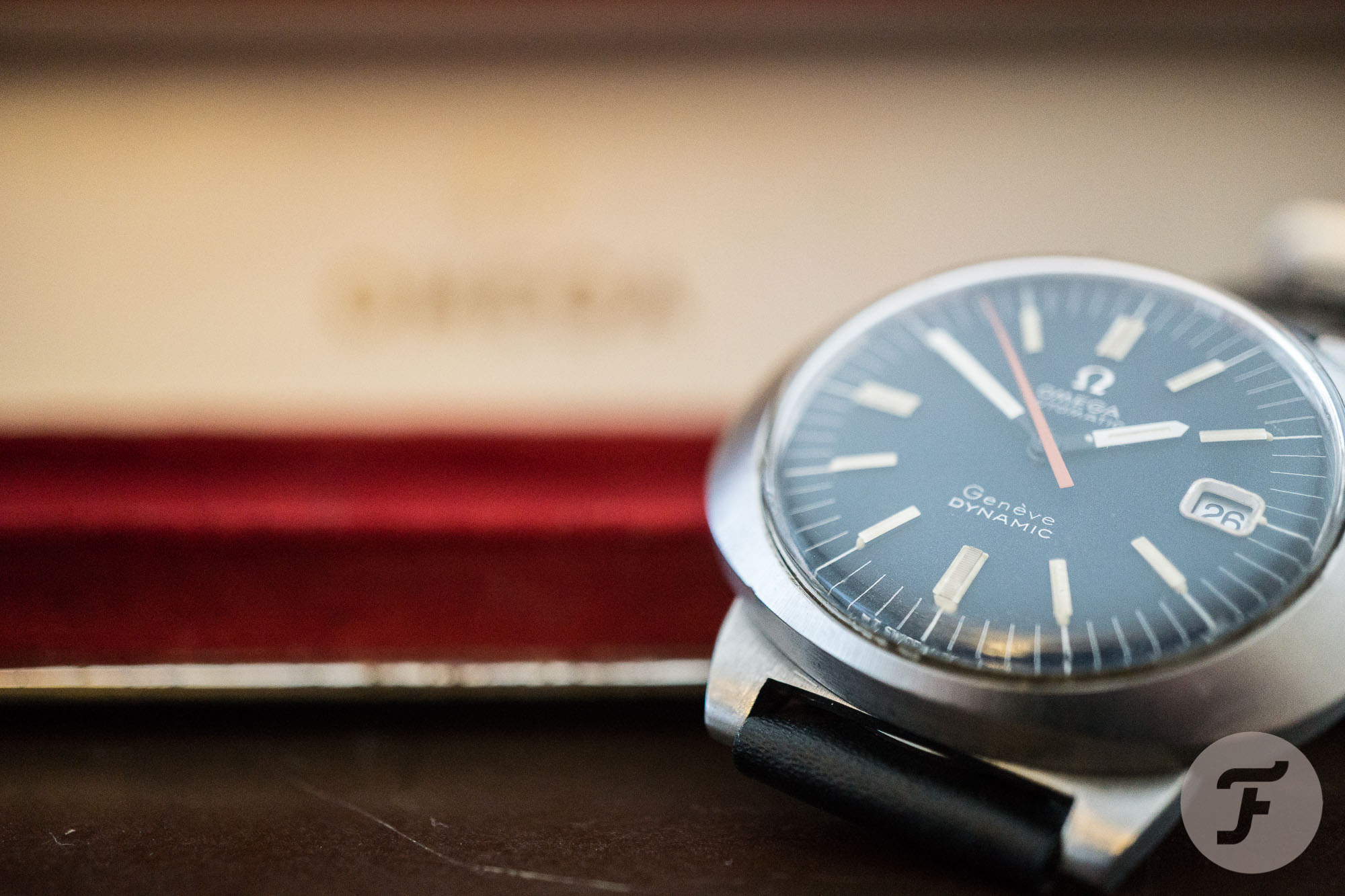 The strap ring is the same O-ring that the case sits into. Though, instead of having an integrated bracelet attached to it, it ends in short lugs with 18mm space between them. This would allow the wearer to attach a regular 18mm strap to the watch. Let that be leather, Corfam, nylon, or whatever else you can find on the market. I often used this ring to put a nato strap on my Dynamic. It gives the watch a sporty feel and changes the otherwise somewhat quirky look of the case a bit. I love this option but keep an eye out if you want one. They are hard to come by, just like the screw-in tools.

As I said at the beginning of the article, towards the ’70s, the Genève Dynamic became part of the De Ville line. As such the model name was no longer Genève on the dial and a bunch of other shapes and dials also came to the market. From 1968 almost until the end of production you could buy a gold-capped version as well. Not too common these days.

Nevertheless, a steel Dynamic is. You can pick them up at almost all platforms for a few hundred euros. There are some ridiculous asking prices out there so please do your research. But a proper example is not more than €300-500 depending on condition and accessories. For instance, if the crystal is original Omega, the little logo should be in the middle like you’d have with Speedmasters or Seamasters. There are also a bunch of NOS parts on the market. 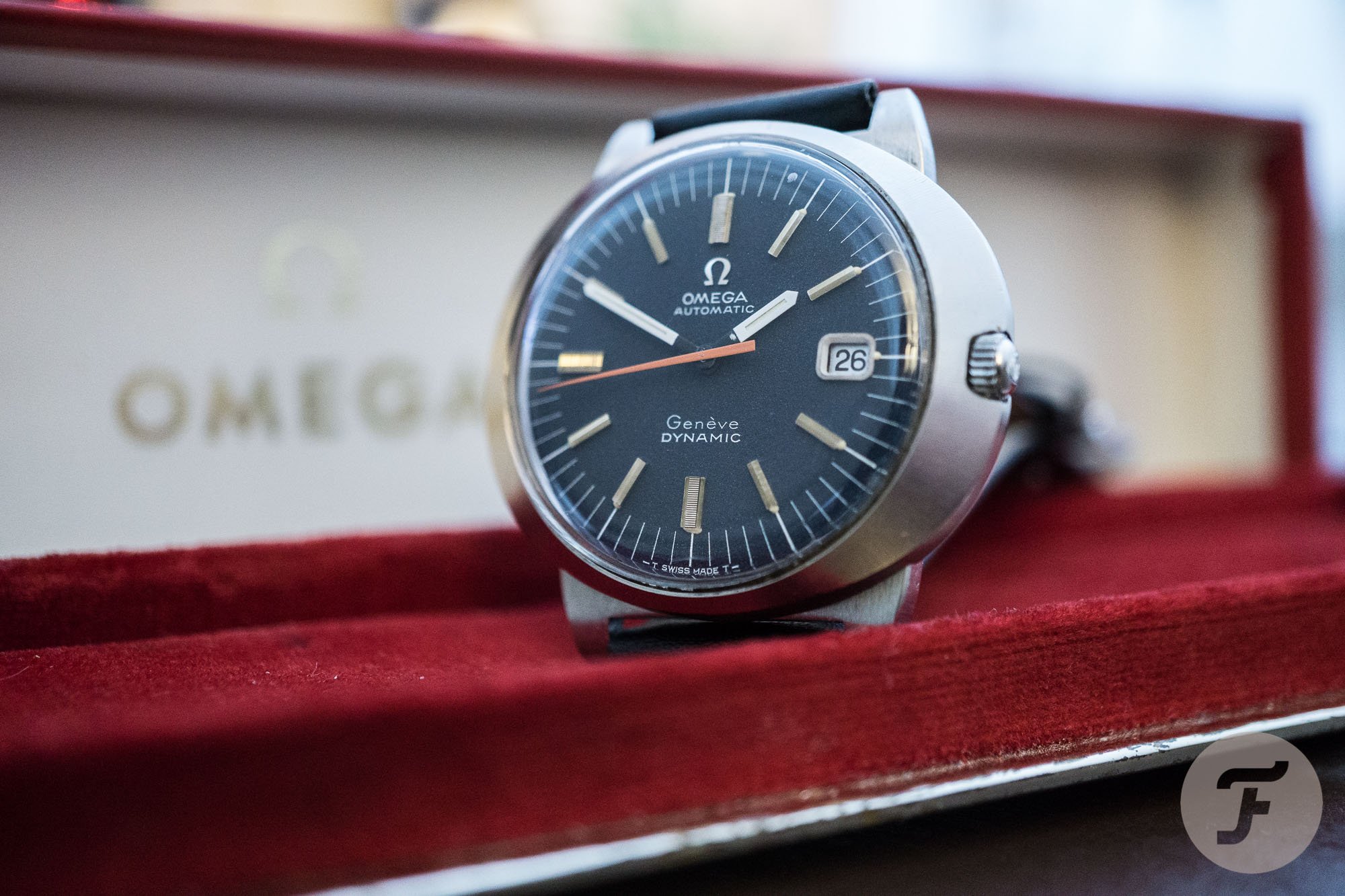 If you fancy, you can build a watch you like. It’ll not be cheap, nor original (in the classical sense). Since Corfam straps were fake leather with time, they would break and tear. But many aftermarket straps are available in a bunch of different colours. Last but not least, do not be surprised if you see a very similar model with a different brand name. Omega wasn’t the only one, albeit I believe the first one, who made such timepieces. At a later point in time, both Certina and Tissot had similar models. Certina’s example was the revelation that looked precisely like the Dynamic with a minor change in the case shape. Tissot’s version, the 7 Seven, was a tad bit different. But the strap changing system with identical on that model as well. Regardless of whichever model you get, these are fun and -for the time being- cheap watches.