Why The Omega Genève ST 166.0190 Makes Me Wish For More TV-Dialed Watches

Because nothing beats the cool '70s style of a TV dial!
Nacho Conde Garzón
comments 13
Share

Before you reach for the remote to change the channel, hear me out for a second. Watches featuring TV dials were big in the ‘70s. And though, admittedly, the square case design has held up better over time and even made a comeback, this dial shape has not received the love it deserves. That being said, who knows? Maybe it will be the next big thing! In any case, today I’ll be showing you my Omega Genève ST 166.0190 and you can make up your own mind on the subject.

Before I make my case for TV dials and square cases, let me tell you about the watch that introduced me to the brilliant format itself. One of my first purchases as a watch-obsessed student living in Münster (shout-out to MeisterSinger), and one of those instances where you take a risk and it pays off nicely. My Omega Genève ST 166.0190 was described as a broken old hand-winding watch, and listed on eBay for €60 including shipping. Now, you might think that in today’s day and age, where endless information and resources are available to anyone with an internet connection, people who list watches for sale will know exactly what they are selling. This is certainly not (always) the case. And that, dear Fratelli, is the unicorn that some of us chase. With enough time and patience, you might just end up catching one! 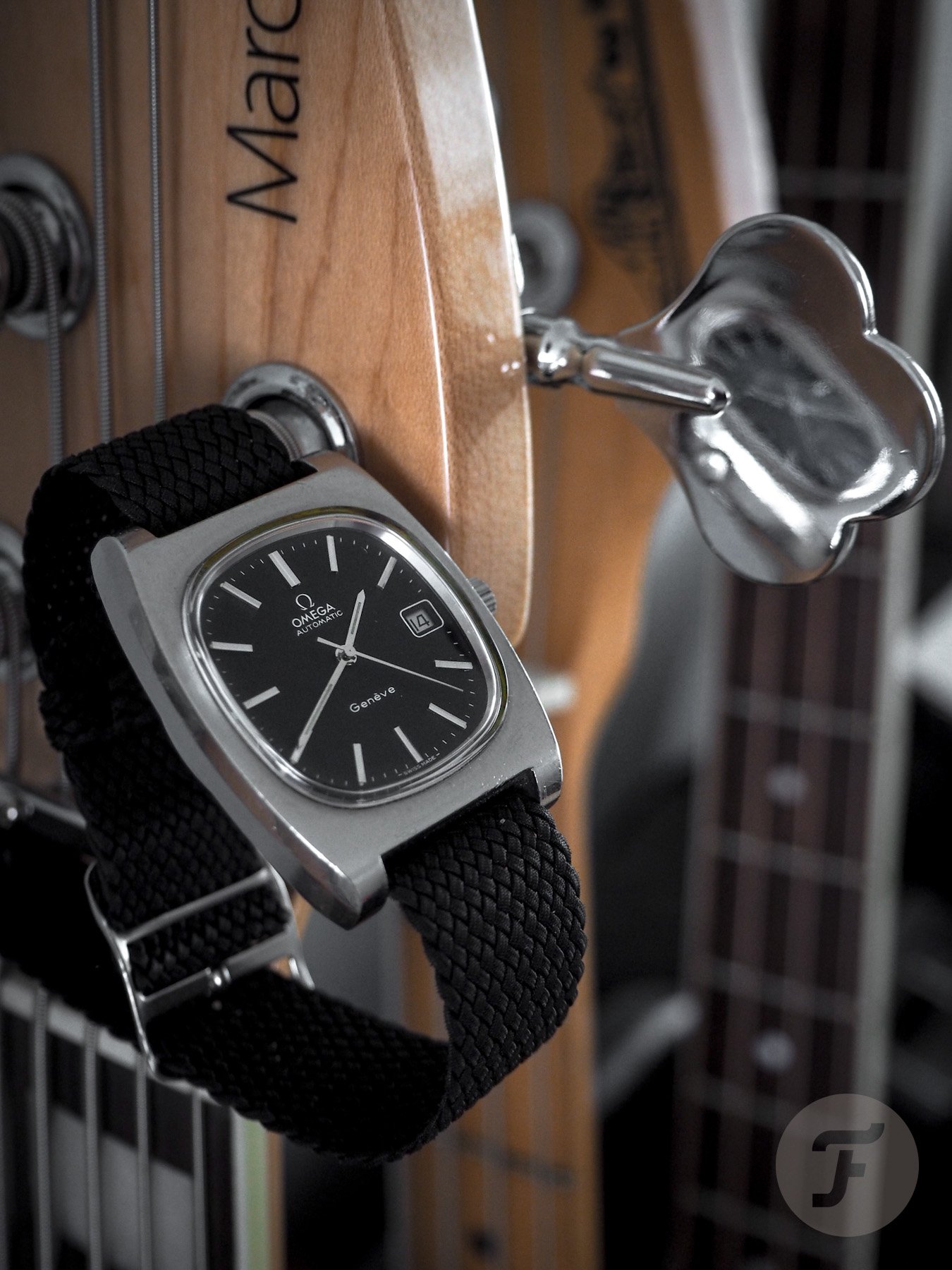 Fast forward to three to five working days later, and I received a small bubble envelope. Every time this happens (and it has happened a few times since then) there is always a split second where your mind goes to the worst-case scenario. Have I been duped? Is there even a watch in there? Even if there is, will it be in a million pieces when I open the envelope? Luckily my track record with irresponsible watch shippers has been quite good, and whether luck or underestimation of the protective powers of those bubble envelopes, every watch I’ve received including this Omega, was in one piece. That being said, take this as a PSA: please don’t ship your watches like that! For more on watch shipping malpractice check out Tomas’s article here. 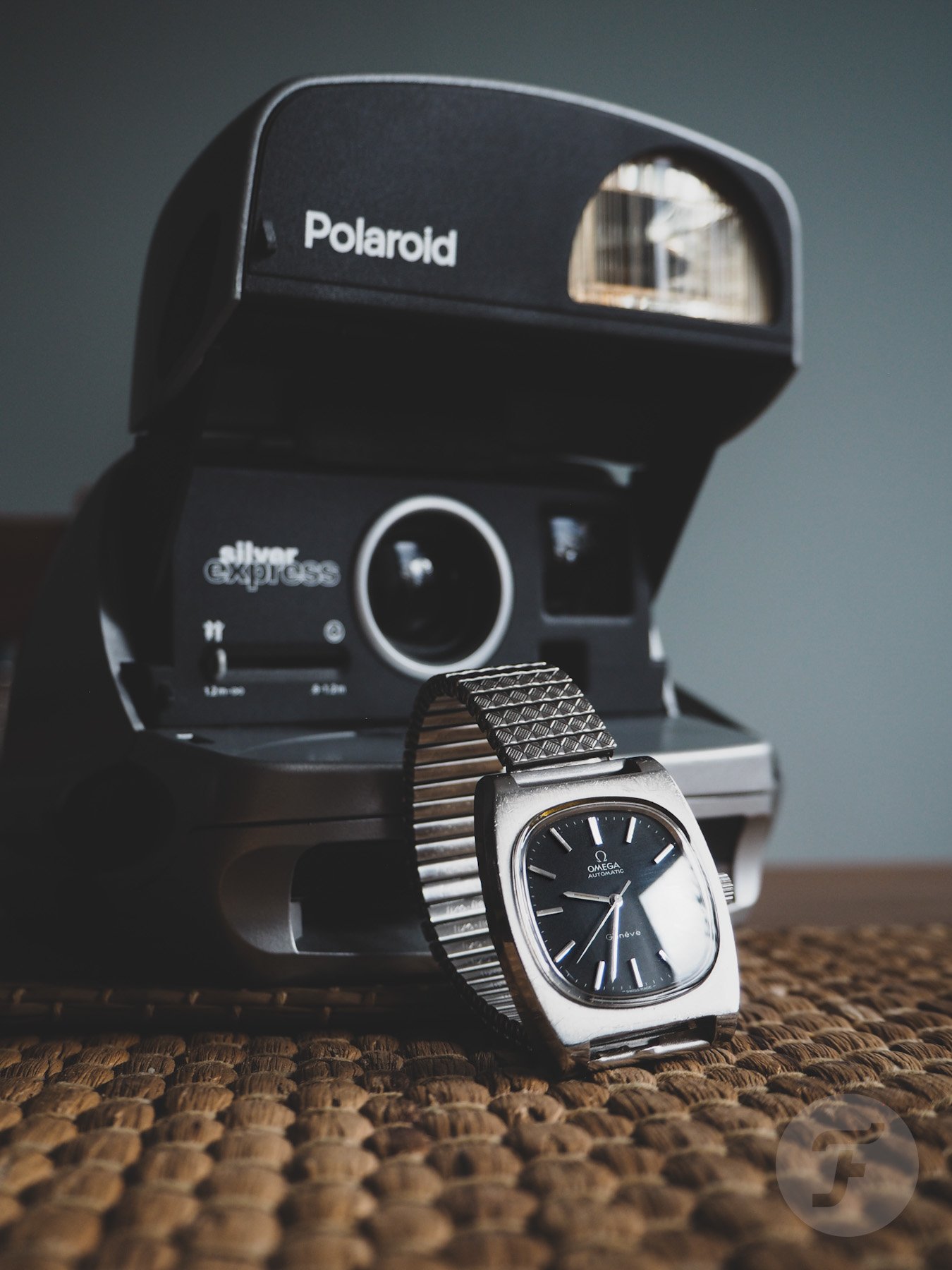 Peering inside, I found the square-cased watch looking right back up at me. The pictures from the listing had not revealed much due to their shockingly bad quality. So first impressions were good. A textured Fixo-Flex bracelet was hanging off of one of the two spring-bars on the watch, with another fragment of it also in the envelope. As I flipped the watch over a wave of relief washed over me when I saw the seconds hand sweeping along. At least the thing worked! I knew it might require some degree of service, so I assumed the worst, so seeing the seconds hand making its rounds over the dial was already quite a good sign. 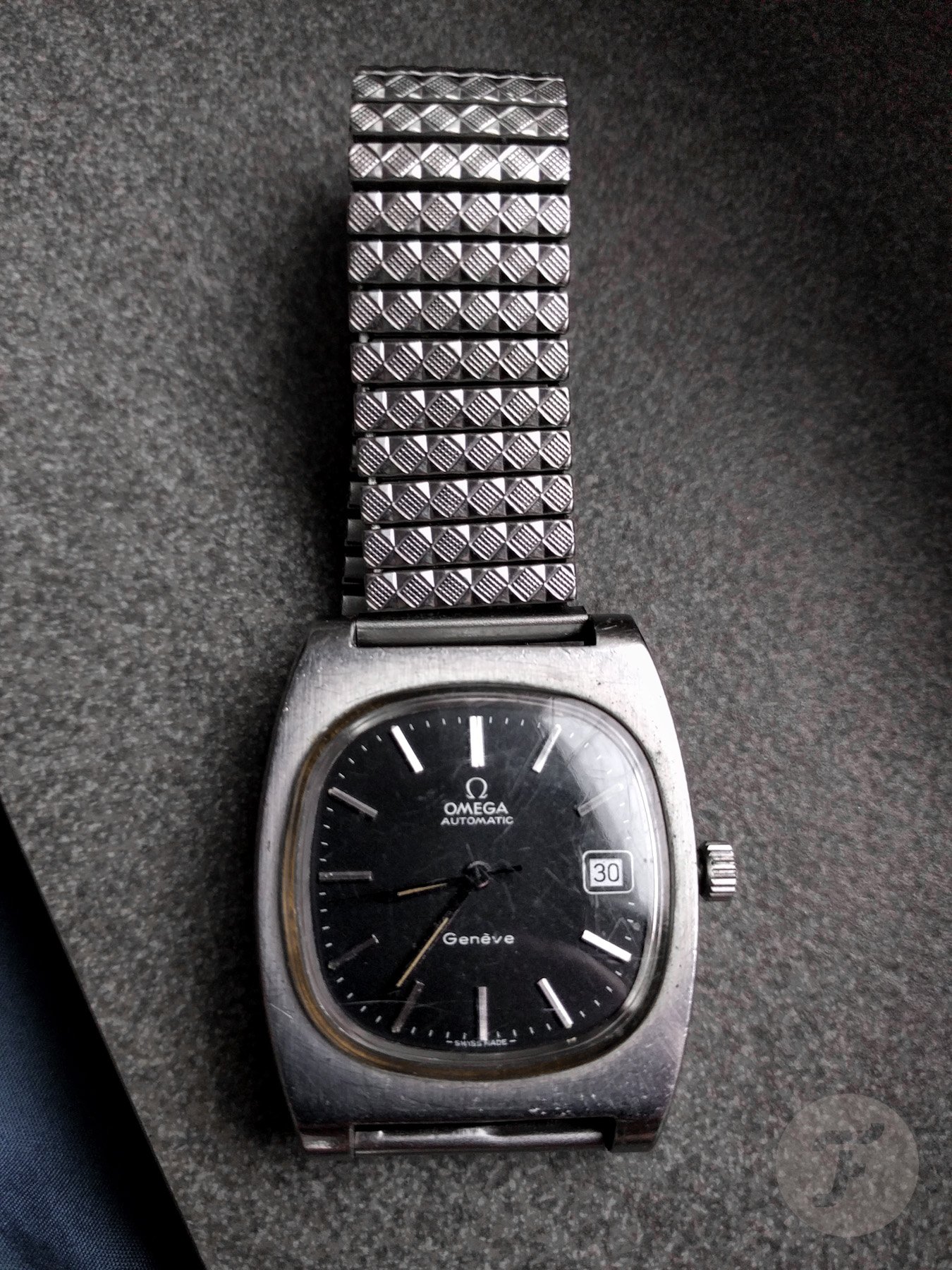 The watch was running, which was already good news. First impressions were, that other than the original scratched plexiglass (which looked great after a quick Polywatch polish) and the good amount of honest wear and tear on the case, the watch was in good condition. The crown, however, had popped free of the case, so it was held in place, somewhat awkwardly by the gaskets, and would have been easily lost. A quick bit of research revealed the solution. The crown on this Omega Genève ST 166.0190 could be popped back into place using a small button inside the case on the movement. It was worth a shot, I thought, as the watch was going to need a service either way. I carefully unscrewed the case back, used a sewing needle to press the pusher, and with a soft click, the crown stem was back in place.

I screwed the case back onto the watch and proceeded to proudly inspect my work. The crown no longer protruded from the case and giving it a twist wound the movement as expected. The real test came when trying to pull it out. Would it click into the first date-setting and second time-setting positions? Or would it pop right out of the case? The answer was a little bit of both. The first time I tried pulling the crown out, it worked exactly as intended. The second time, it fell out again. My solution was then to set the time then put the crown back in, close the case back, and keep it wound. 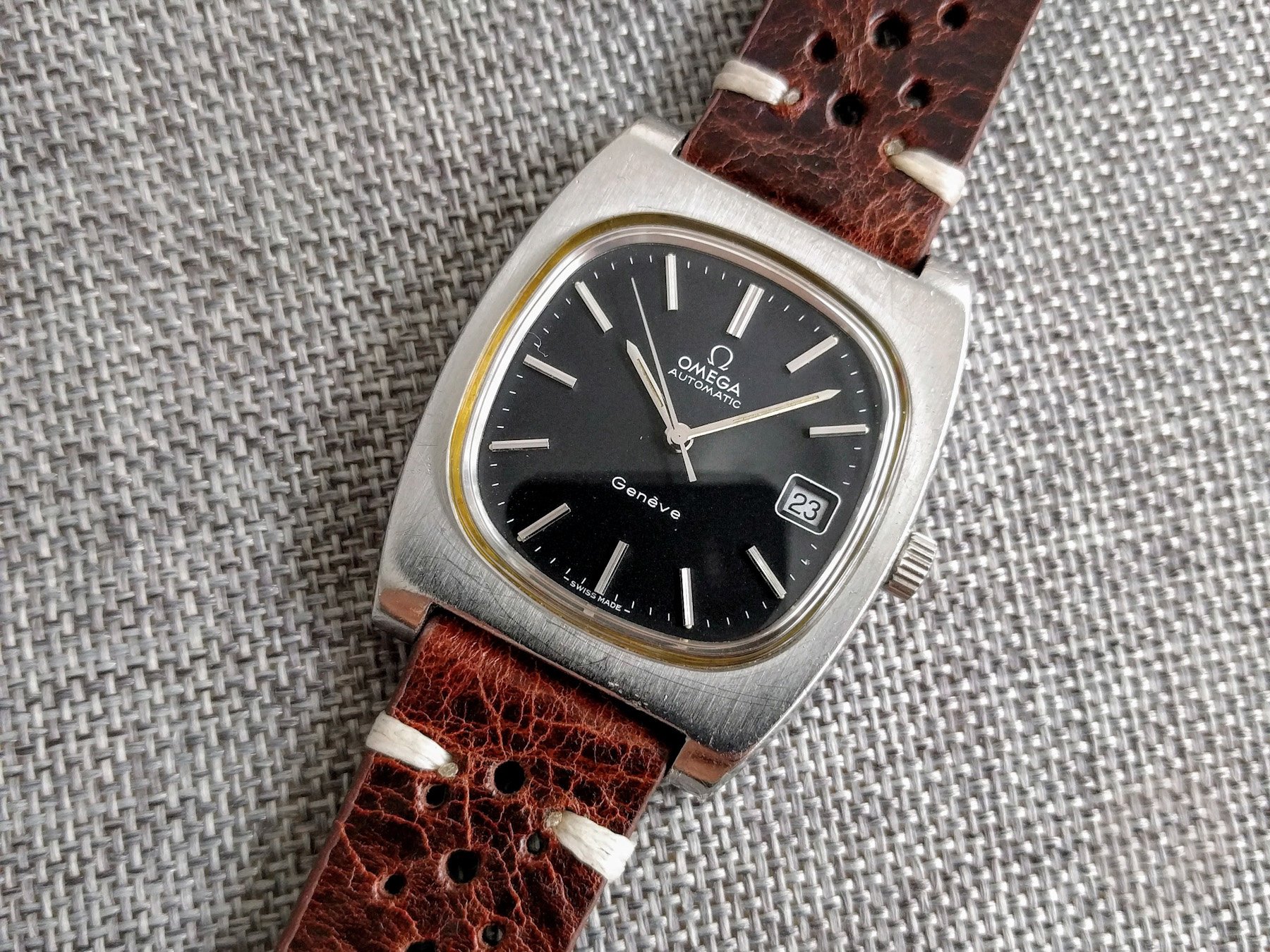 When good sense does not prevail

You might be thinking (or even screaming at your screen), that I should have had it serviced right away. However, being a student, paying the €400 service fee (as estimated by a local watchmaker) was just not something I could consider. So what happened was that I ended up wearing the watch only occasionally. Waiting for the time to come around to the time on the watch before winding it. It was about as impractical as it gets, but I was so excited to wear an Omega watch that I simply didn’t care. I could set the date in the first position without risking the crown popping out, but adjusting the time was a no-go. 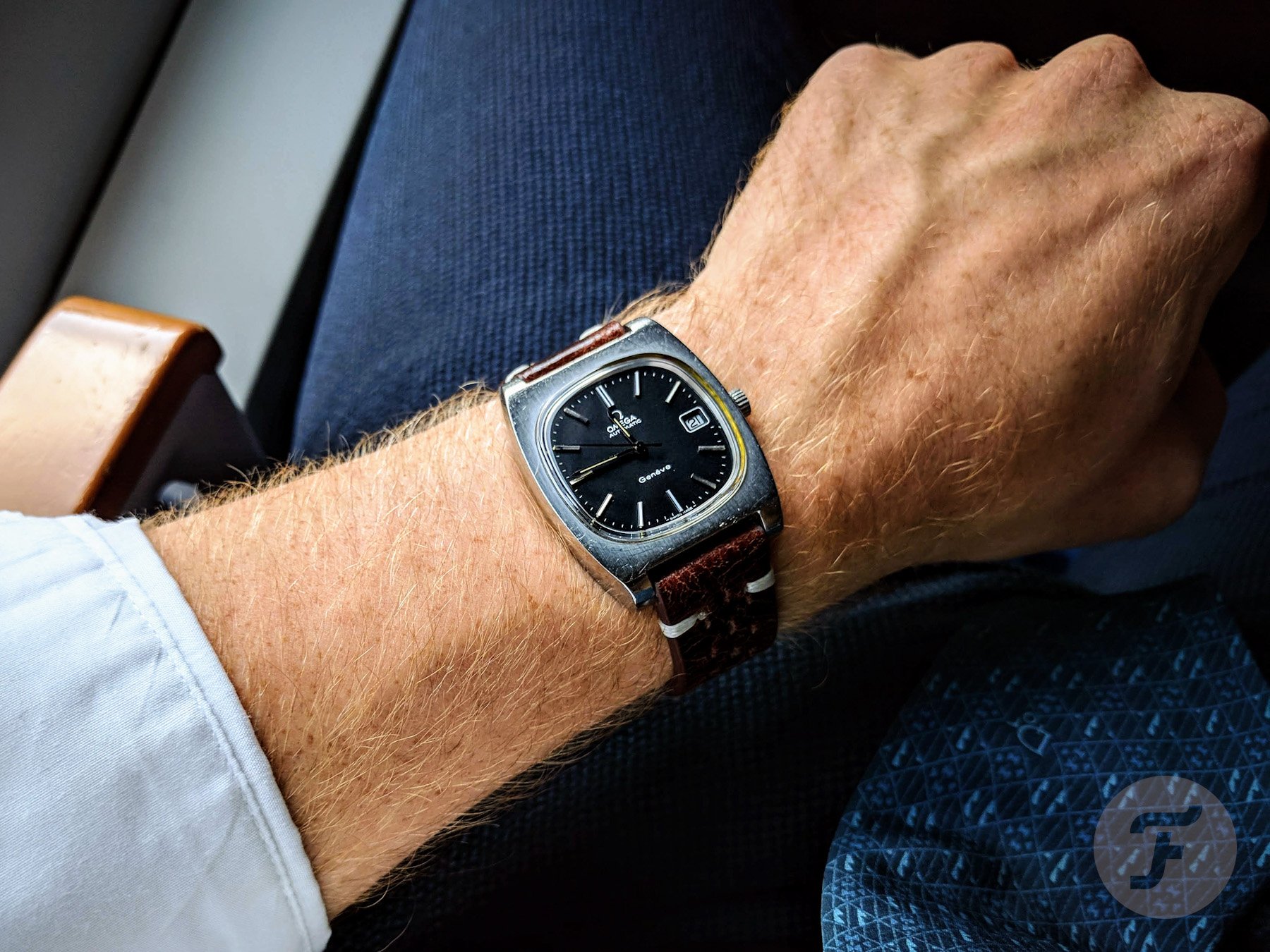 For the last year and a half, the watch has sat in my watch box, waiting for its turn to get a service and some much-needed TLC. However, even today, the prospect of shelling out €550 for an official Omega service for a watch that cost 10% of that sum, and that I only occasionally wear didn’t exactly motivate me. So for now, this piece will only come out on rare occasions, in wait of getting some well-deserved care. But that doesn’t stop me from taking pictures of it or talking about it today. Also, one cool detail is the case back engraving, which shows that this watch was likely a retirement gift to someone who worked at a German car dealership called Autohaus Köster for 25 years to be precise. 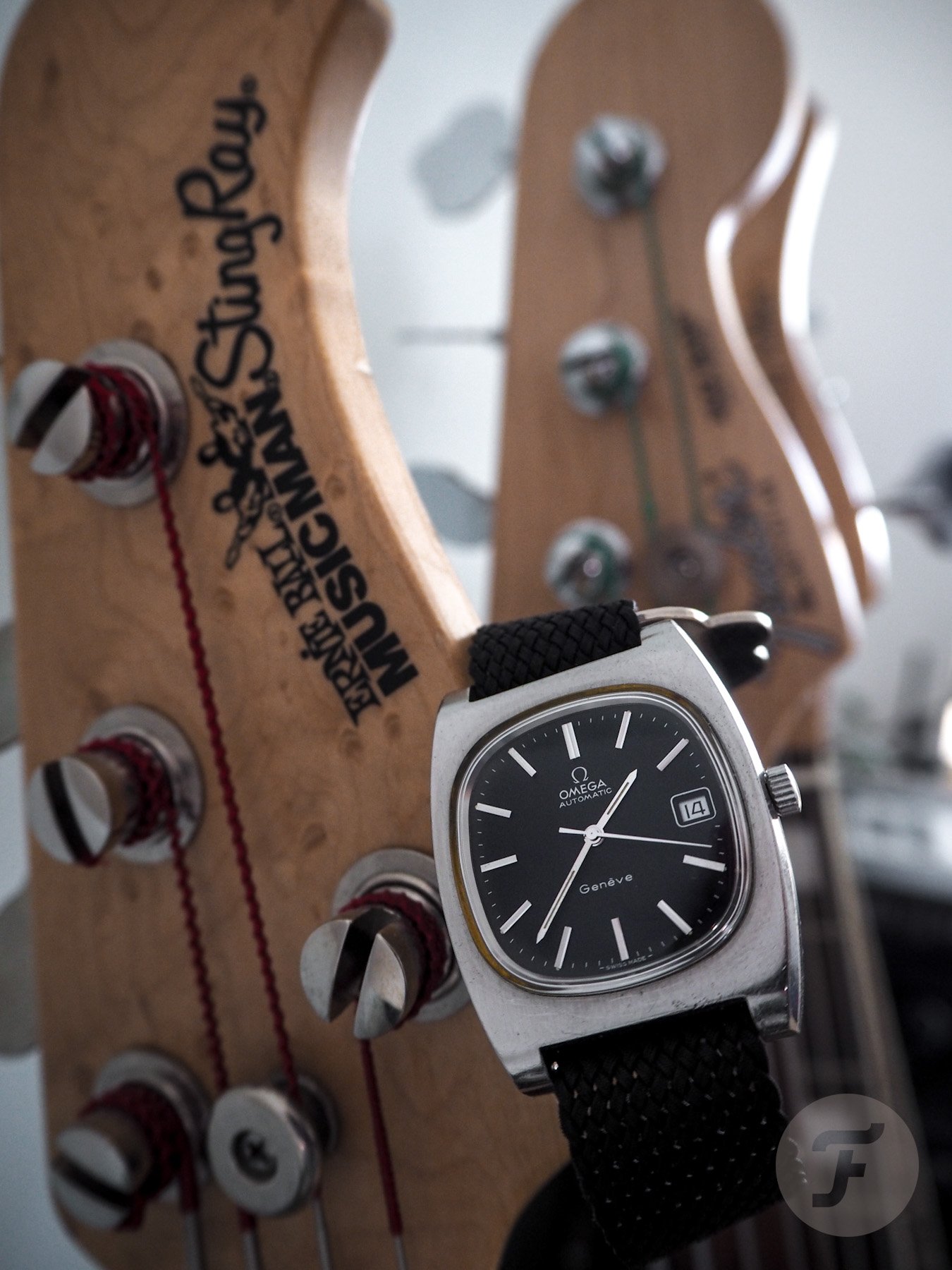 So let’s take a look at the watch itself. The Omega Genève ST 166.0190 brings some rather particular shapes together, with the 36mm wide by 44mm lug-to-lug tonneau case and TV-dial. It’s a true work of ‘70s watchmaking. According to the Omega website, it was only produced for the international collection between 1974 and 1975. Two things on my particular example are not original to the watch. One is the unsigned replacement crown, and the other is the appropriately funky Fixo-Flex bracelet. I actually managed to fix the bracelet, and still use it on the watch. Something about the look of it on the watch makes it too good to swap out. Although the watch does work very well on a leather or perlon strap too.

Inside this lovely Omega, is the automatic caliber 1012. This movement has a quickset date and a hacking feature. It runs at 28,800 VpH and has a power reserve of 42 hours. It also has a signed rotor and has the salmon copper color of older Omega movements, which makes it rather pleasing to look at. Even despite the lack of service, the movement ran only slightly fast, gaining about a minute every five days. Not ideal, but something that a service won’t be able to fix. 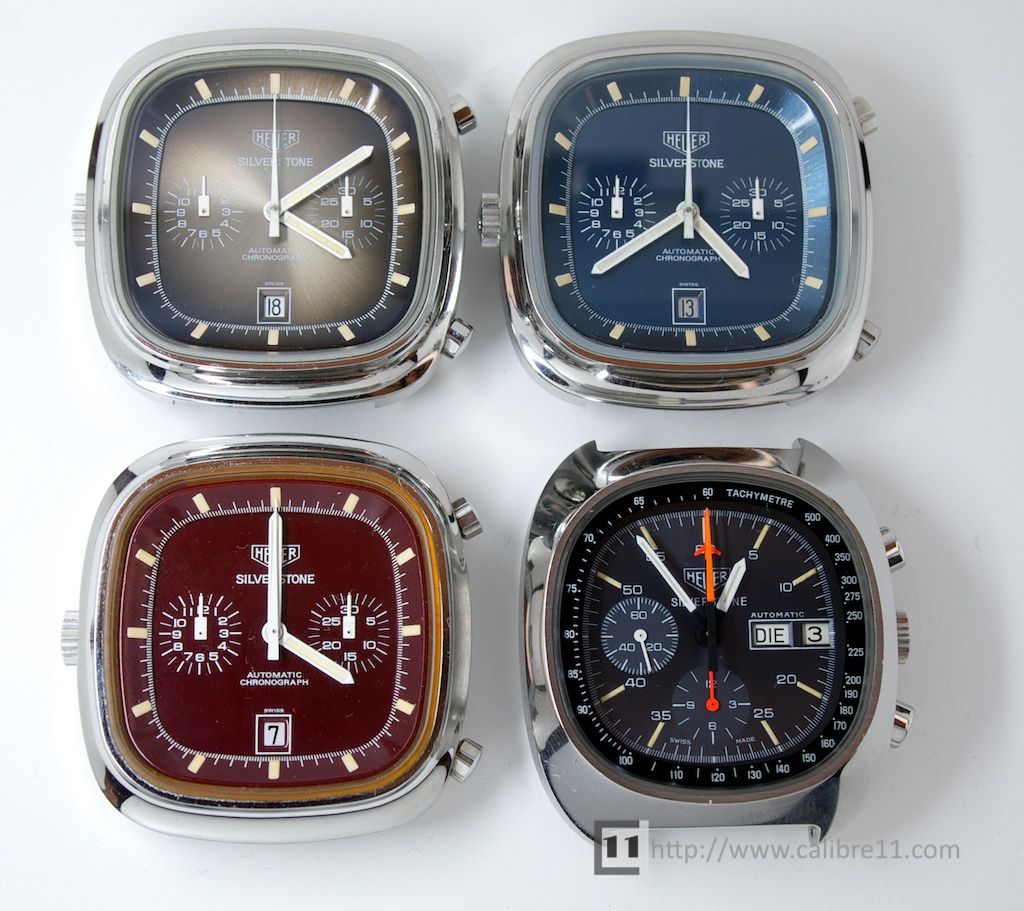 So now that you’ve read the story of my €60 Omega, humor me further, and let me make the case for TV dials. Though this particular watch may not help the case, there are a number of brilliant watches which feature this distinctive dial shape. Omega especially made a number of models in the Seamaster, Genève, and Constellation lines with TV dials in the ‘70s. For the sake of keeping this short, I’ll only mention three that are my absolute favorites. The first of these comes not from Omega, but from Heuer. That’s right! I’m talking about the Heuer Silverstone. Calibre11 published an insightful piece on the Silverstone here. 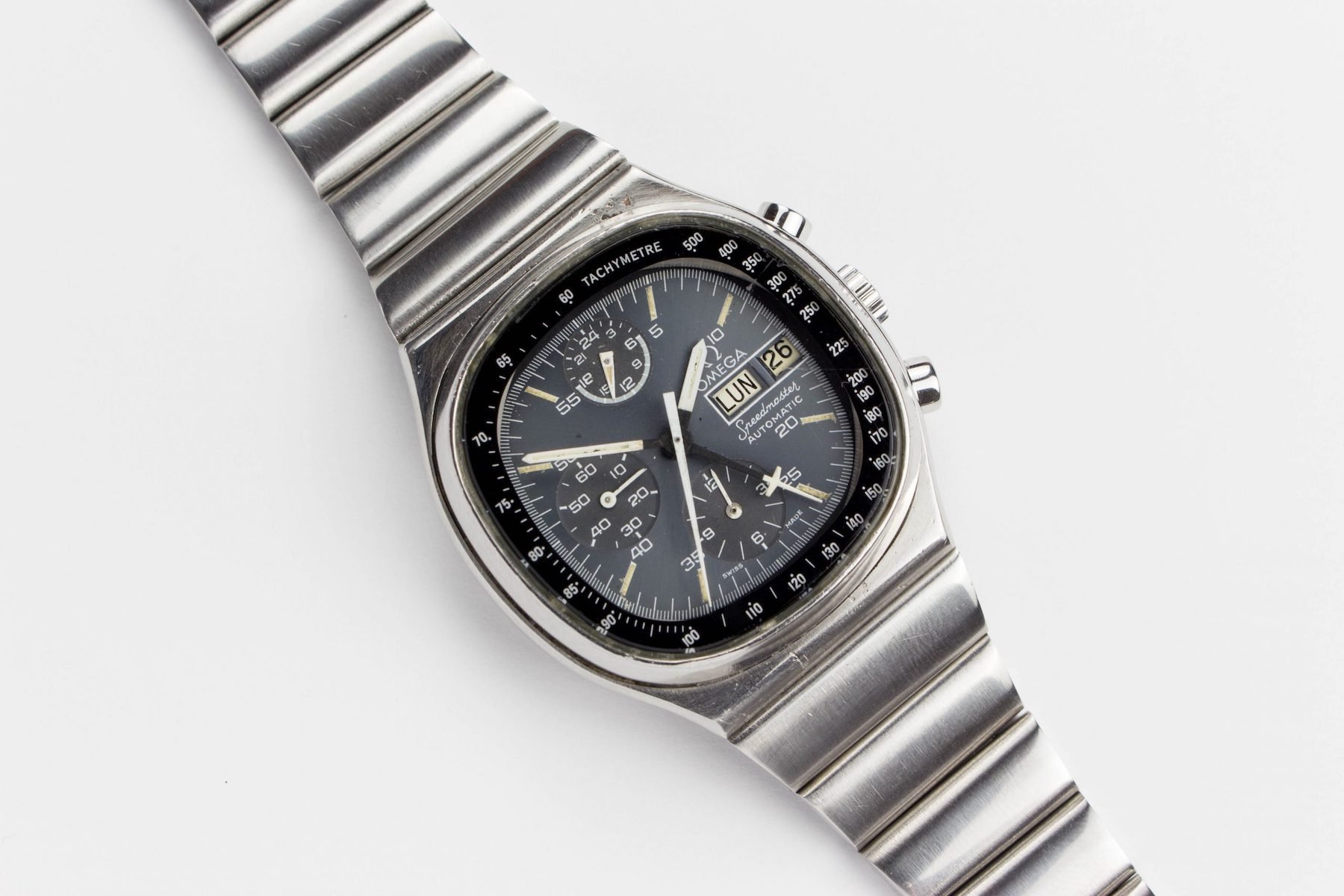 My second pick is the Omega Speedmaster TV 176.0014. Talk about not getting anywhere near enough love! This wonderful TV-dialed automatic Speedy is just incredible. Down to the tapering integrated bracelet, and weird but wonderful dial layout, this is definitely a conversation starter. Jorg wrote about this one in more detail in his article here. 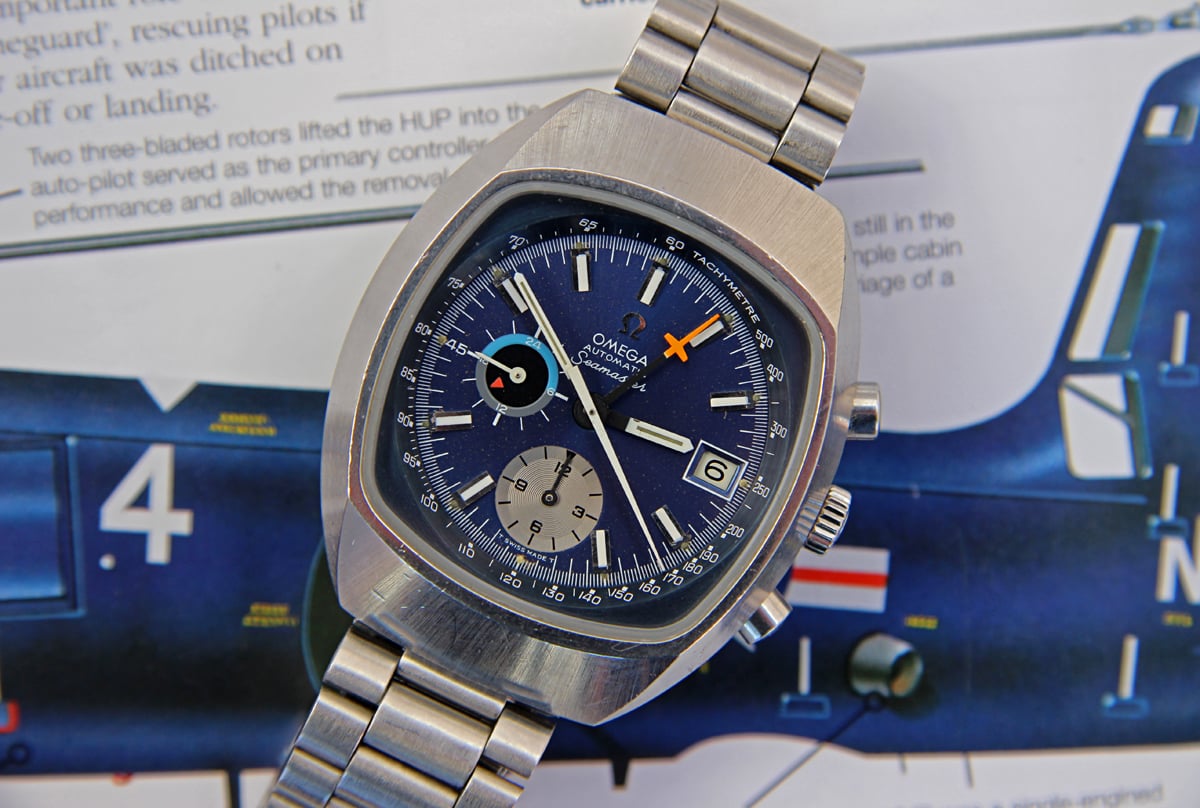 The final pick and my favorite TV-dial watch out there is the Omega Seamaster 176.005 ST chronograph. Now, you might argue that this isn’t a true TV dial, as the dial itself is actually round, but thanks to the crystal’s TV shape, I would argue that this counts as one. The more traditional dial layout makes it easier on the eyes than the TV-dialed Speedy, and the blue, red, and orange details make it one funky number. This is one I would love to call my own someday. One last watch worth mentioning which could be said to feature a TV dial would be the Patek Philippe Nautilus! Not exactly round, and not exactly square, perhaps more refined than the designs we have looked at today, but once you see it, you can’t unsee it. 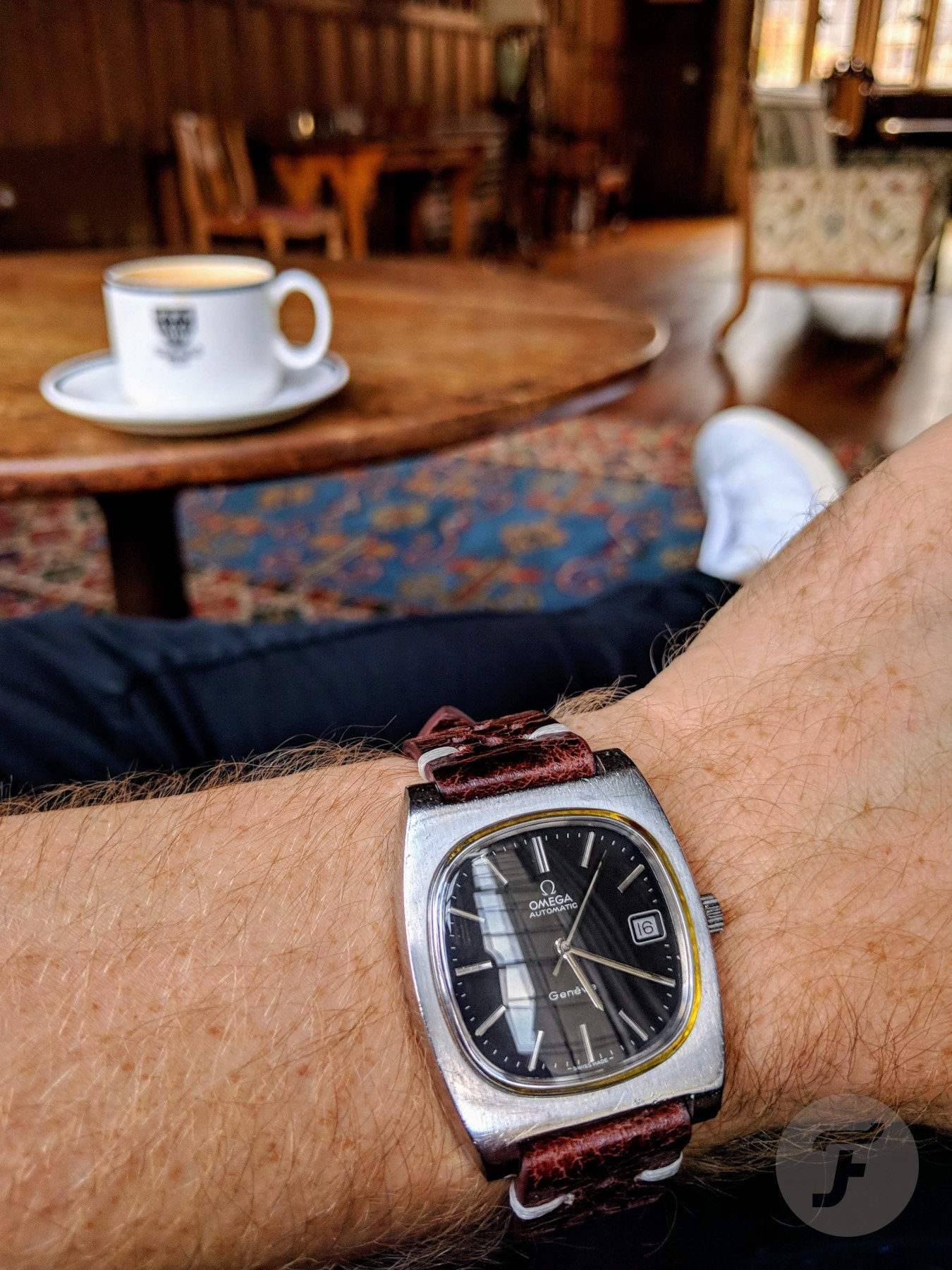 TV dials are definitely not for everyone. I stumbled across one when a beat-up old Omega Genève made its way into my collection, and it was certainly not love at first sight. Instead, it’s one of those things that slowly grows on you. It also proves that different sometimes is indeed better. Similar watches exist with round dials, and I find them rather unremarkable. It’s the combination of the case, dial, and crystal shape that adds to the undeniable yet somewhat antiquated charm of TV-dialed watches. So if you’re interested, remember that this particular Omega can be had for well under €1000 on the vintage market.

Lucky for me, I’m not the only crazy TV-dial advocate out there! It seems that Mr. Jonathan Ferrer of Brew Watch Co. shares this taste for this trait of ‘70s watch design! The Retrograph, Retromatic, and Metric models all feature this peculiar dial/crystal shape. In the case of the latest release, the Metric, you can really see the Omega Seamaster 176.005 ST lent some inspiration! 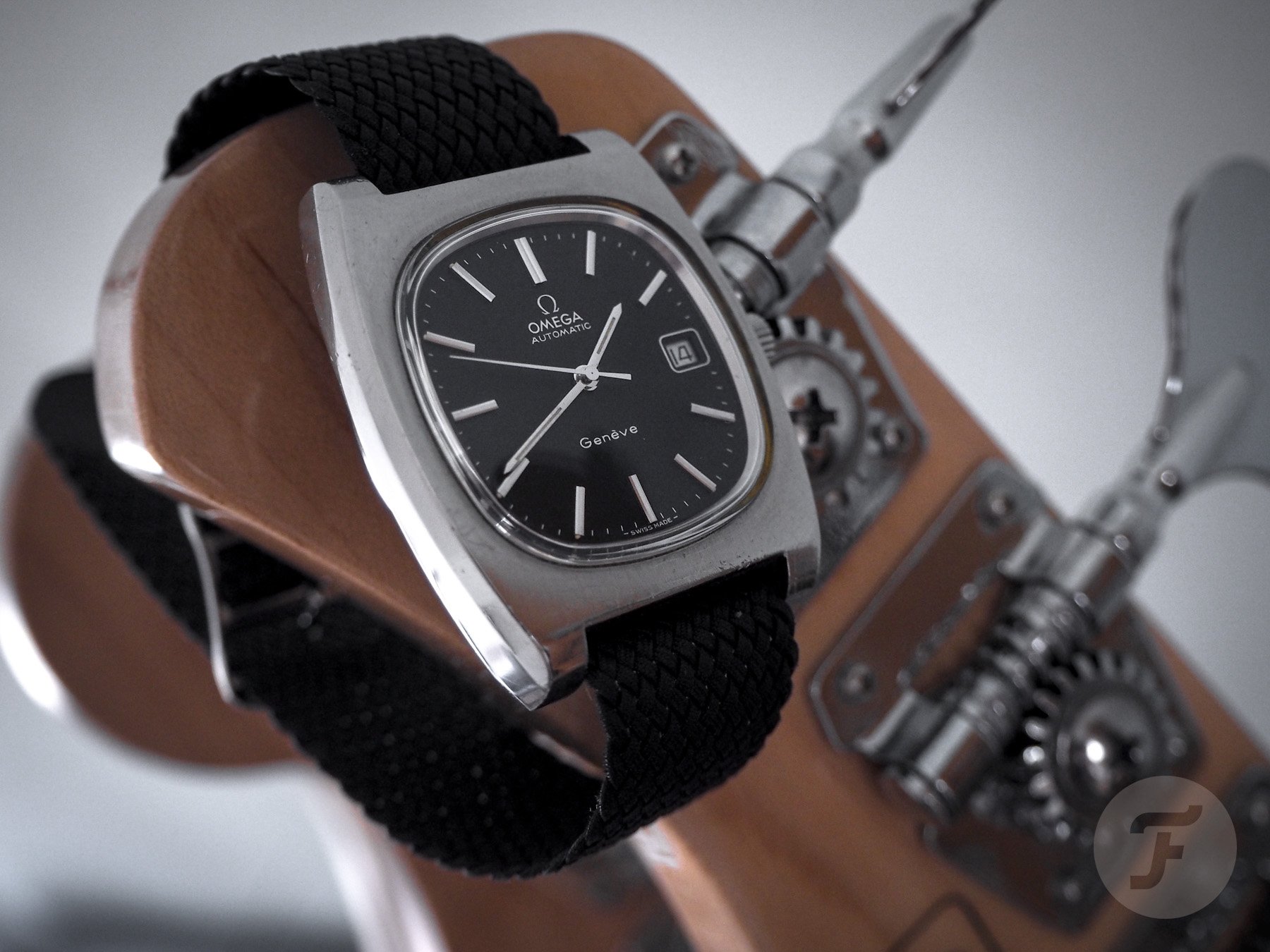 What do you think of TV dials? Do you wish they had been abandoned and chalked down as a no-go sign of poor taste? Or do you dig their particularly groovy aesthetic? Let me know your favorite TV-dial watch in the comments down below!