The Omega Museum Collection is an interesting assembly of timepieces. The idea is simple and something other brands also implement; let’s take some of the most iconic designs of the company’s past and rerelease them, updated to modern standards. You can look at these watches as simple reeditions. But they’re more than that, I think. This watch, the Omega Museum Collection Milestone 1941 Officer’s Chronograph, is a perfect example of that…

For instance, its design, rooted in the 1930s, is not as popular as the first Speedmaster’s or Seamaster 300’s from 1957. The Milestone 1941 has a distinct look. It is something you don’t see anymore. However, a lot of modern watches take inspiration from pieces from a bygone era. Even according to those standards, the ’30s seems a bit outdated. Yet, the piece is a true wrist candy. So, I will try my best to explain to you why.

The Museum Collection by Omega has been around for decades. You might remember the 1938 Aviator Reedition, which was in production between 2000 and 2008. Perhaps my favorite, the square Omega Cosmic Moonphase model from 2002, was a limited edition of 1,951 pieces. The list goes on and on, often featuring reinterpretations of cornerstone models from Omega’s rich past. Yet, for some reason, we tend to overlook them. Just like we did with the Seamaster 1948. However, these timepieces deserve our attention, for they are exceptional in more than one way.

And I’m not the only one to think this way. When I lasted visited the Hague this past September, Jorg and I talked a lot about the Museum Collection. He is a fan, just like me. Subsequently, this article is the result of that chat. Hopefully, it will be the first of many dealing with this model line. 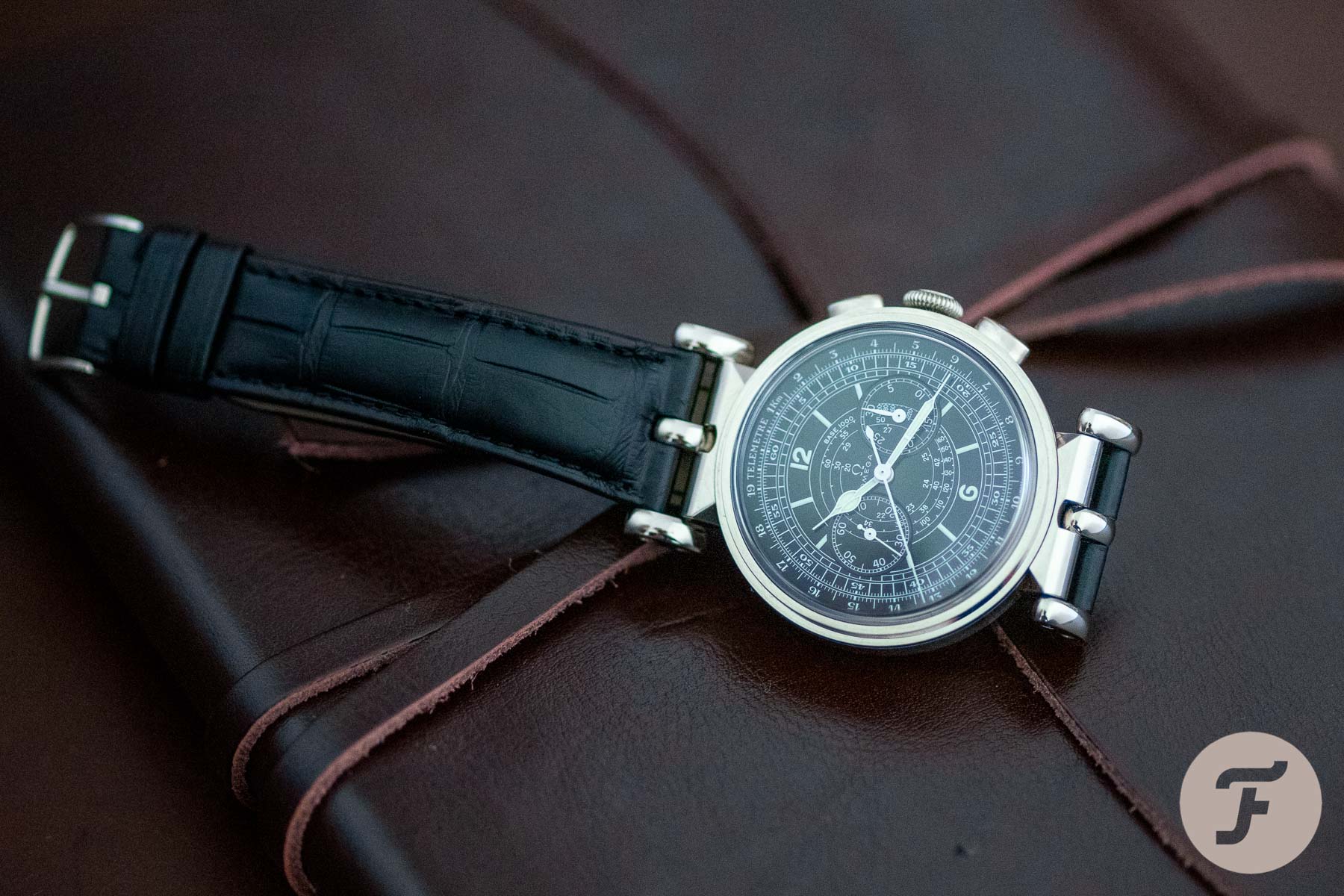 You can find three models in Omega’s current Museum Collection. Out of these three, I chose the one that stands out the most. Firstly, it has a black dial, contrary to the light dials on the other two. Not only that, but it’s a military-inspired dial. A rare one in Omega’s line up. In general.  Secondly, the case material, albeit looks steel is white gold. The only such material in the Museum Collection. I love this precious metal for its inconspicuousness. Lastly, its overall looks. While the other two models in the collection are rather similar in looks, this one stands out quite a bit. Certainly, a detail many of you appreciate is the swing lugs. Additionally, the Milestone 1941 is the only watch here with flat chronograph pushers. So, it’s safe to say that this is the one that stands out the most in the current line up. 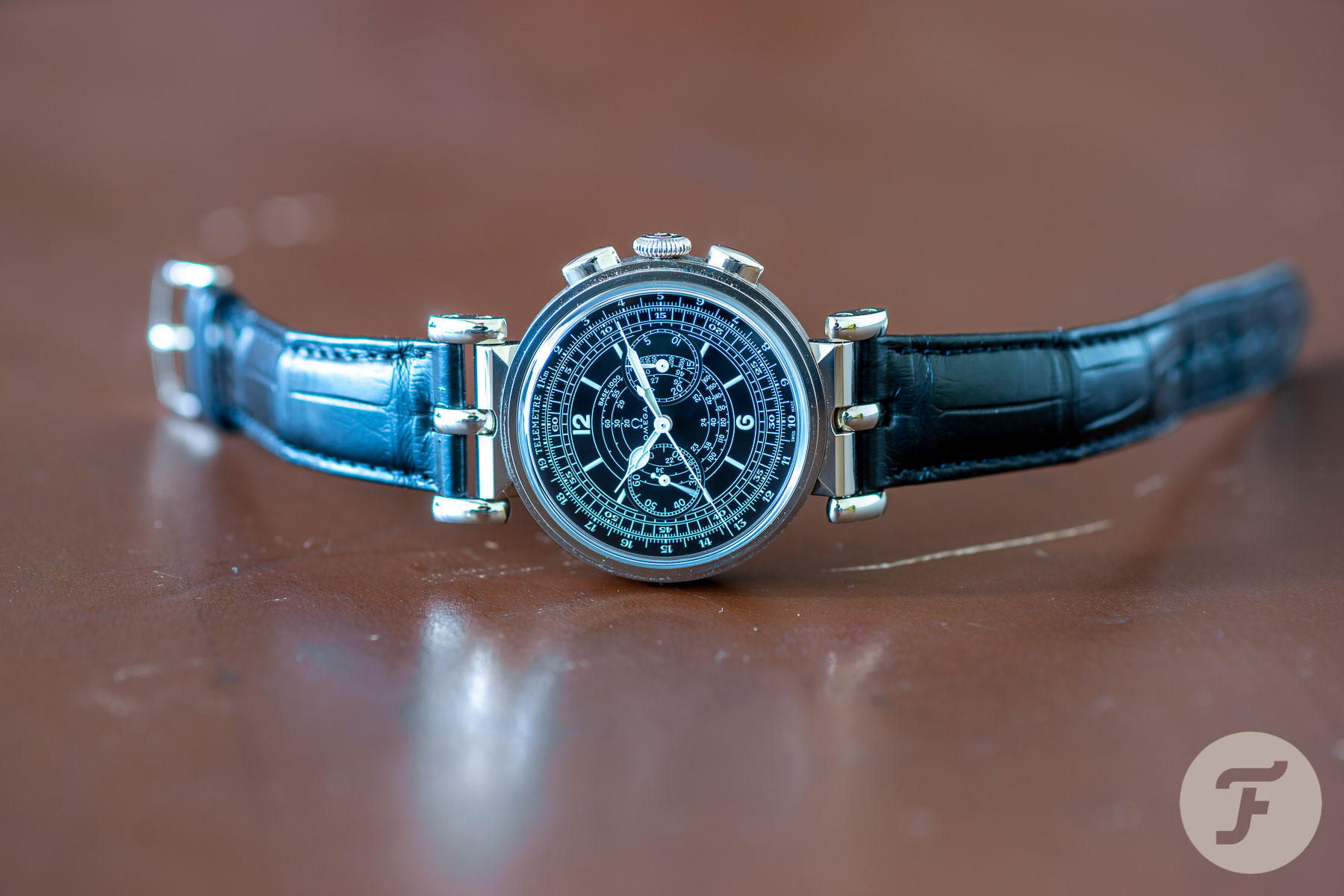 Here’s something you don’t see too often these days. Swing lugs were very common back in the 1930s and early 1940s. However, this trend fell victim to the new wave of wristwatch design. I’m not an expert on the topic. Though I’m guessing that the origin of swing lugs is from trench watches — pocket watches converted to wristwatches used by military officers. In any case, the Omega Museum Collection Milestone 1941 comes with such extravagant lugs. Such a watch went under the hammer during the famous Omegamania Auction in 2007. As the catalog reads, “Lot 78 CHRONOGRAPH WITH TACHOMETER AND TELEMETER” had an estimation of CHF 7,000–10,000. Eventually, the watch sold for CHF 59,000. Our watch here is the spitting image of that vintage piece from 1941 with only a few minor “upgrades,” if you will. 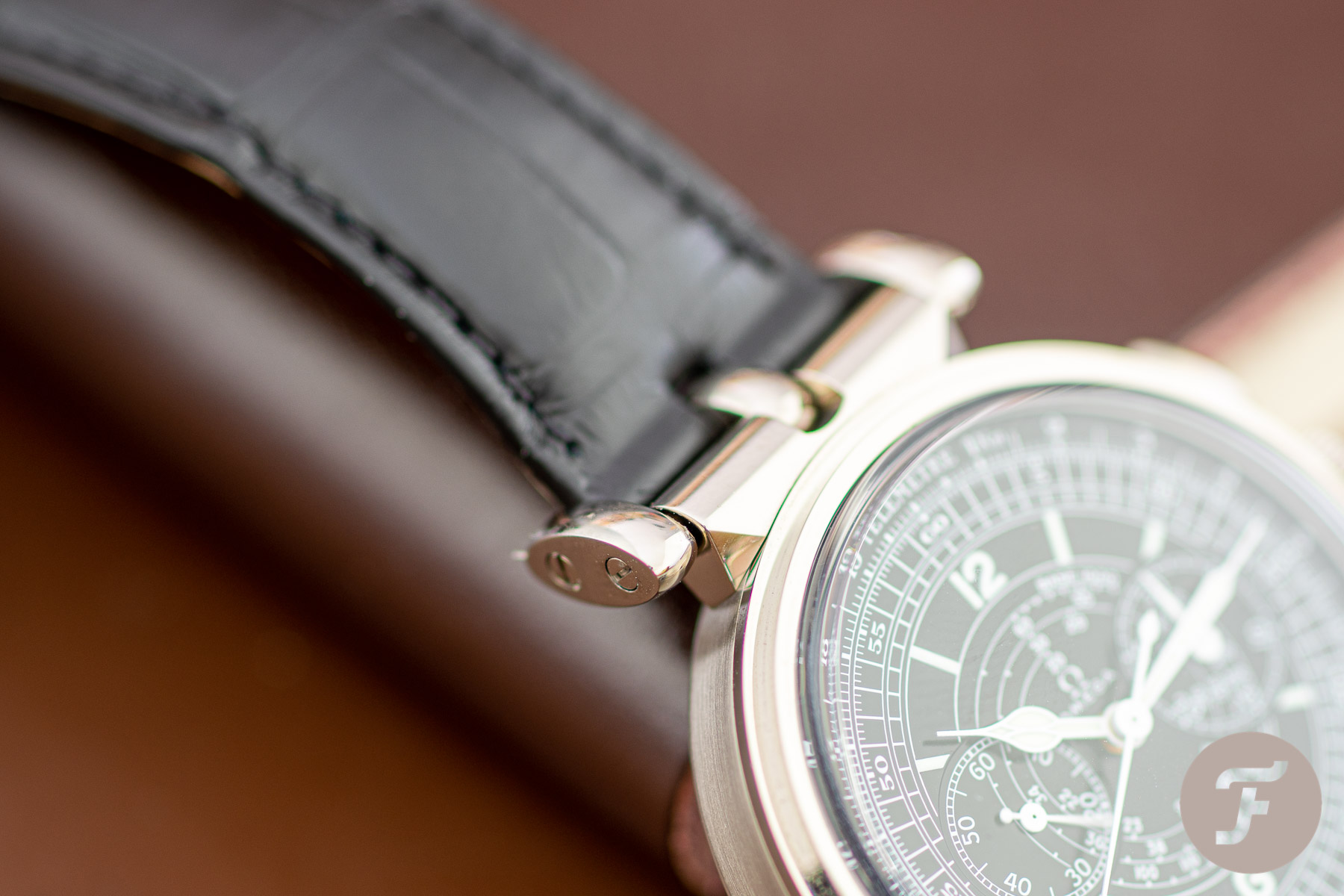 We have a case width of 38.1mm with only 12mm of thickness. Also, the lug-to-lug length is 44.7mm. However, if we take the end of the swing lugs as tips, the measurement is an inflated 55mm. All in all, the Milestone 1941 is a very comfortable watch. It fits perfectly on the wrist, thanks to its flexible lugs.

Due to the white gold case, the watch is a tad heavy. To be precise, it weighs exactly 100g on an 18mm leather strap. While the swing lugs are, of course, articulated, the Milestone 1941 is not as fragile as its vintage counterpart. If you have handled watches from the early 1940s, you might remember how light and delicate they feel. That is not the case with this piece. Omega tried to stay as close to the original in terms of looks as possible. Hence we have a solid case back with only minimal text. 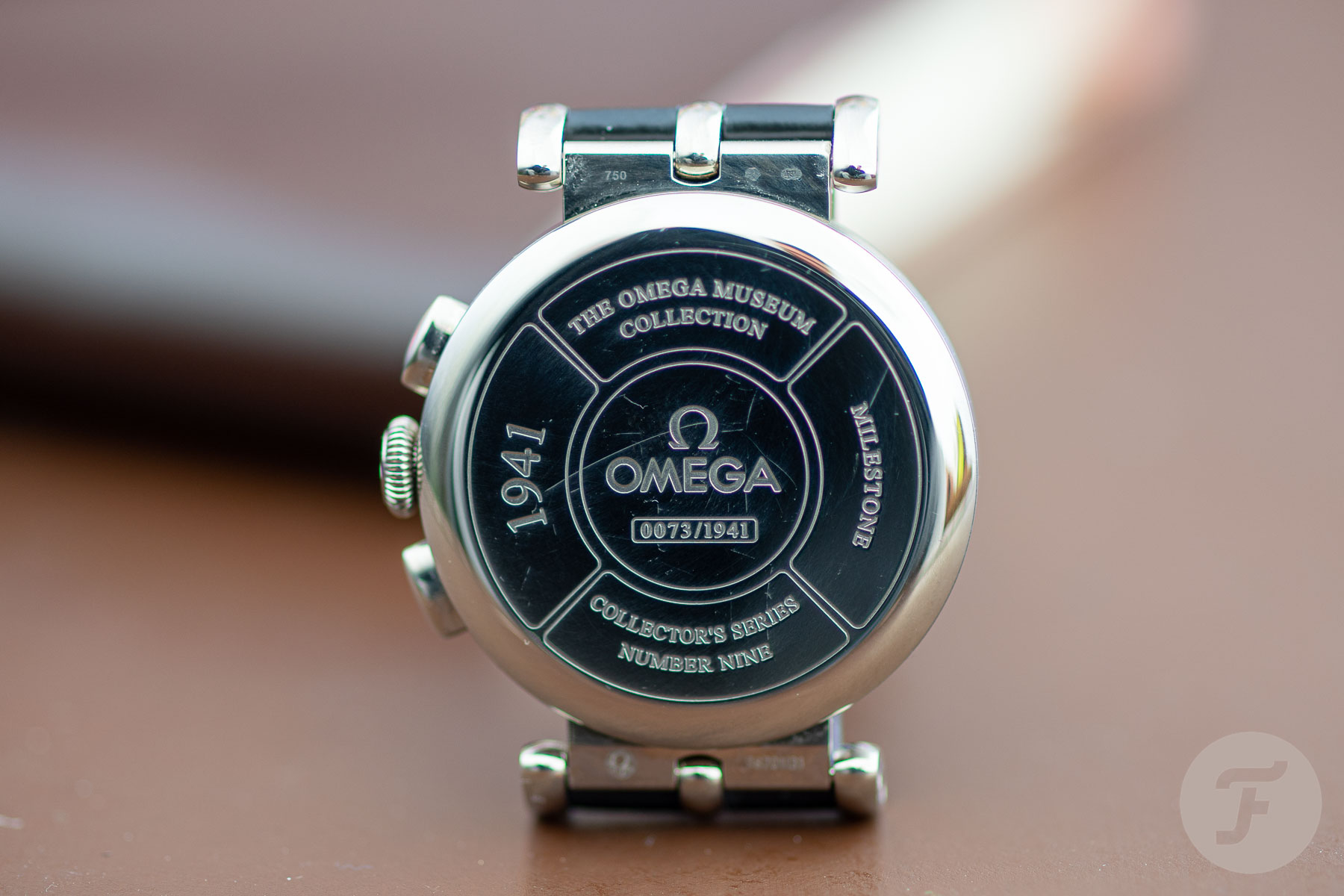 Another part we mentioned above is the dial. Not only the color, but its layout shows a striking resemblance to the vintage piece. Here we have a 2-register chronograph dial with the continuous seconds at 9 and the 30-min counter at 3. Towards the center, you can find the Base 1000 (Tachymeter) scale. This would be used to measure speed.  In addition, at the rim of the Milestone 1941’s dial, is a Telemeter scale.

Heavily used by military personnel, this scale would help you determine the distance to remote objects (like artillery). Under the Telemeter scale was the chronograph’s 60-second measure. And only after that came the watch’s indexes with only two numerals, the 12 and 6 being visible.  Yes, it looks busy at first glance, but trust me it is not. Thanks to the large cathedral hands, reading the time is super easy on the Milestone 1941. 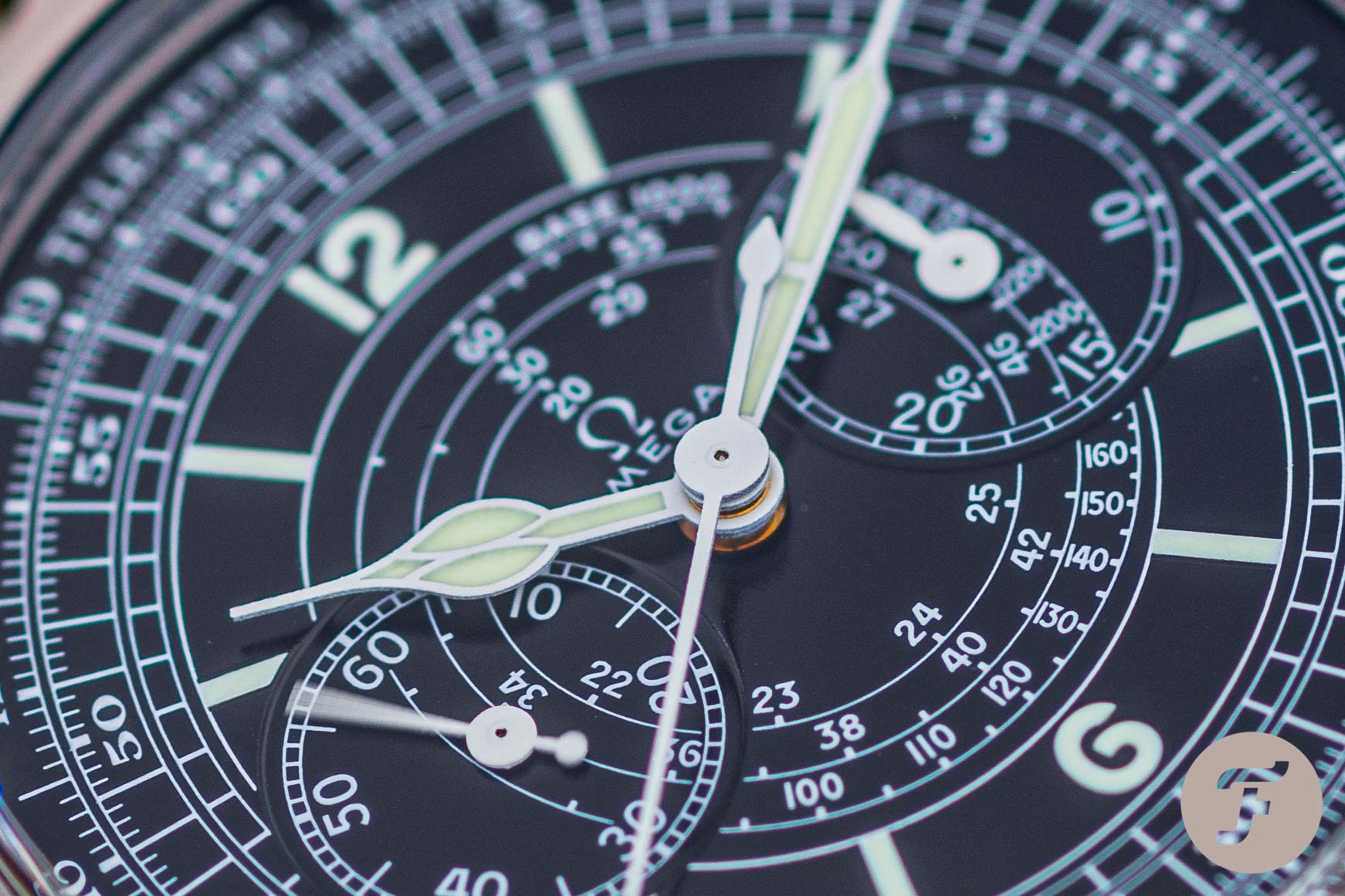 Although due to the solid white gold case-back we don’t get to gaze upon it, the watch has a special caliber inside. The original 1941 officer’s chronograph was a watch equipped with everything needed at the time. Equally so, this new model had to have a caliber that is state of the art.

In other words, Omega chose to equip the Milestone 1941 with a caliber worth talking about. Inside the timepiece beats Omega’s 3203 caliber. Don’t worry if you are not familiar with this movement. Omega only used them in Museum Collection chronographs. This is a manual-wind, column-wheel chronograph movement with Co-Axial escapement. The 3203 has 55 hours of power reserve, 33 jewels, and 28,800vph. Moreover, the caliber is chronometer-certified. The base is the same Piguet 1285 Omega modified for other calibers. That movement alone is worth its own article. 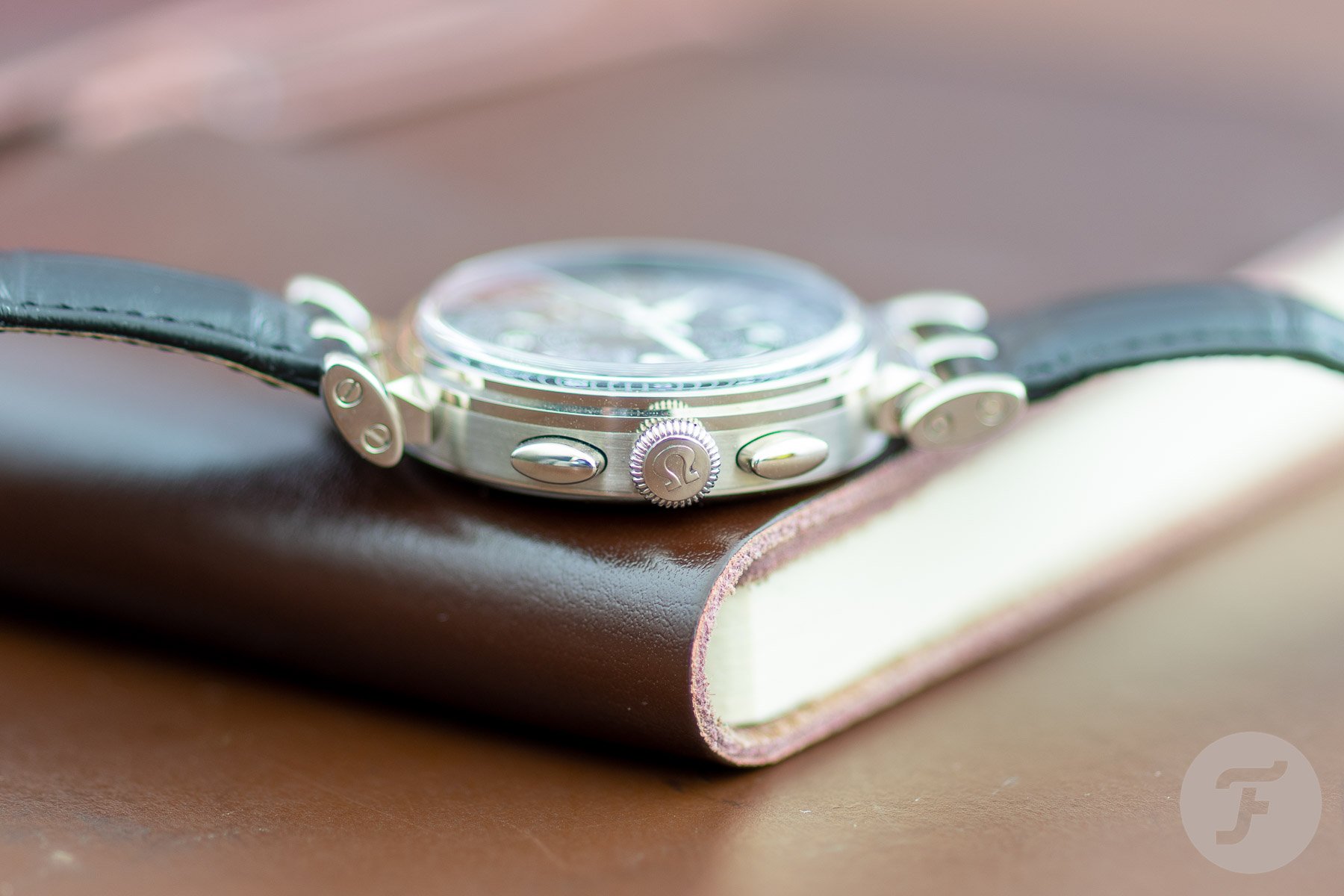 As you would have it with every Museum Collection watch the Milestone 1941 is limited to only 1,941 pieces. You can find the LE number on the center of the case back. As the watch is still in Omega’s current collection, securing one at an Omega Boutique should not be too difficult. However, this timepiece, as you might have guessed, comes with a hefty price tag.

Due to its precious metal case, limited nature, and overall low production number the price is €17,550. The Milestone 1941 is part of a Collector’s Series. Hence there is a marking on the back which tells us that this edition is number nine. Equally so the red gold chronograph from the Museum Collection is number eight, while the yellow gold chronograph is number ten. In any case, the Milestone 1941 is a lovely timepiece with vintage charm in a modern interpretation.