Back On Stage: The Omega Speedmaster Platinum Moonphase Master Chronometer

Already in 2018, we showed you the new Omega Speedmaster platinum moonphase watches, in green, blue and red. These watches were presented to us on platinum bracelets, with a weight of approximately 500 grams each.

We don’t exactly know why those watches (we showed them to you in this article) never made it to the market, but during the Time to Move event for press, Omega showed them once more. This time, with a leather strap and platinum clasp. Aside from the missing platinum bracelet, we didn’t spot any other changes of the Omega Speedmaster platinum moonphase. However, we thought it was time to take one up close and share some of my thoughts with you for this Speedy Tuesday article. Meet the new Omega Speedmaster platinum moonphase watch in blue. 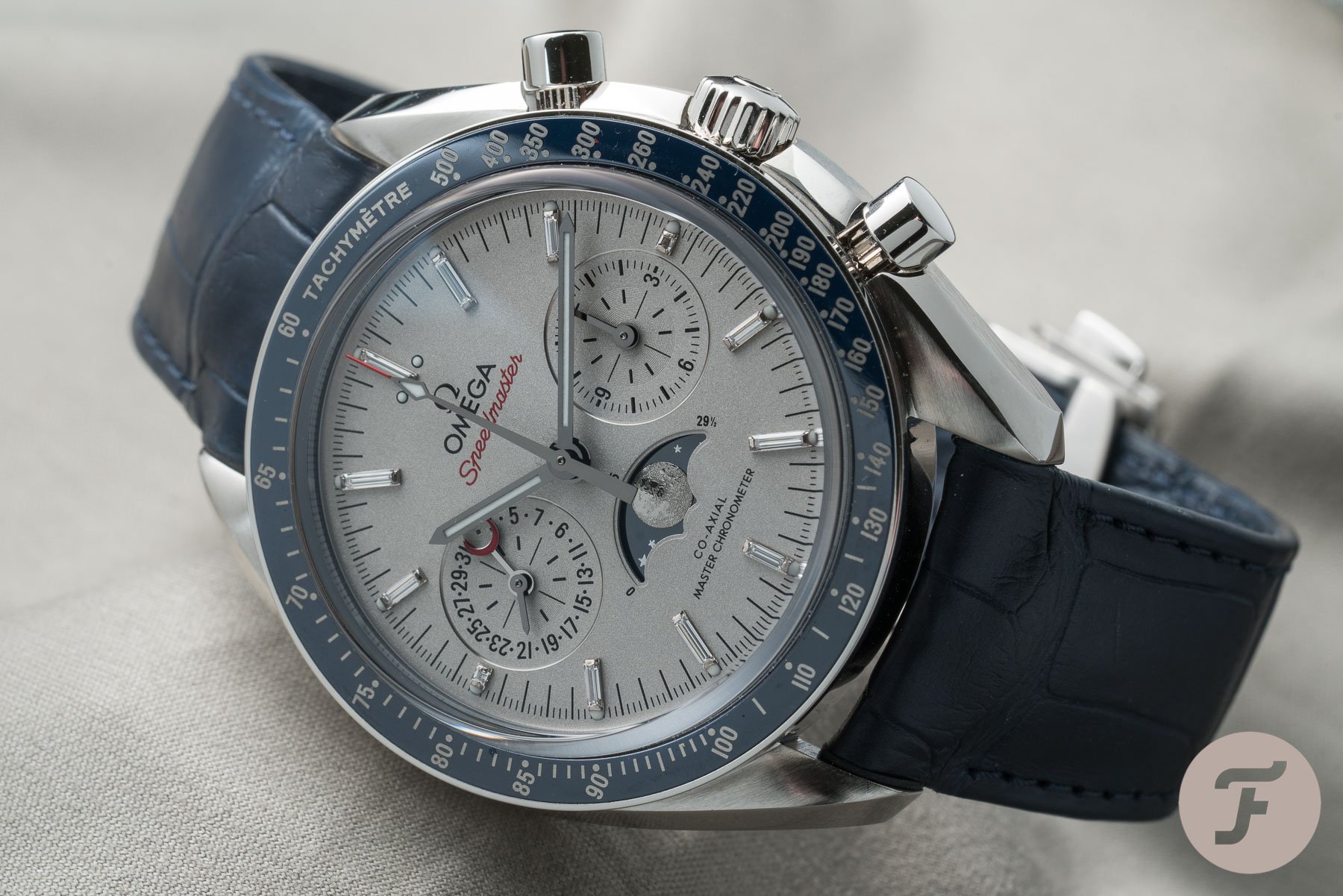 The official full name of this Omega model is even longer and slightly different, as it is the Speedmaster Moonwatch Omega Co-Axial Master Chronometer Moonphase Chronograph 44.25mm.

I decided that this is way too long and confusing (using Omega seemingly random within the model name, although I understand it is to indicate the in-house movement) and keep it at Omega Speedmaster Platinum Moonphase. I’ll add Master Chronometer, to show it’s indeed their latest movement with a co-axial escapement and METAS certification. I am also of the opinion that this watch has little to do with the Moonwatch and it is a bit of a riddle why they categorize it as such. It surely has design elements of the original hand-wound Moonwatch, but that’s about it. All this might sound a bit of harsh criticism or negative, but Speedmaster Platinum moonphase (and pick a color) covers the load perfectly, and there’s no-one on Earth going to an Omega boutique and asking for the Omega Speedmaster Moonwatch Omega Co-Axial Master Chronometer Moonphase Chronograph 44.25mm with reference 304.93.44.52.99.004. No one. 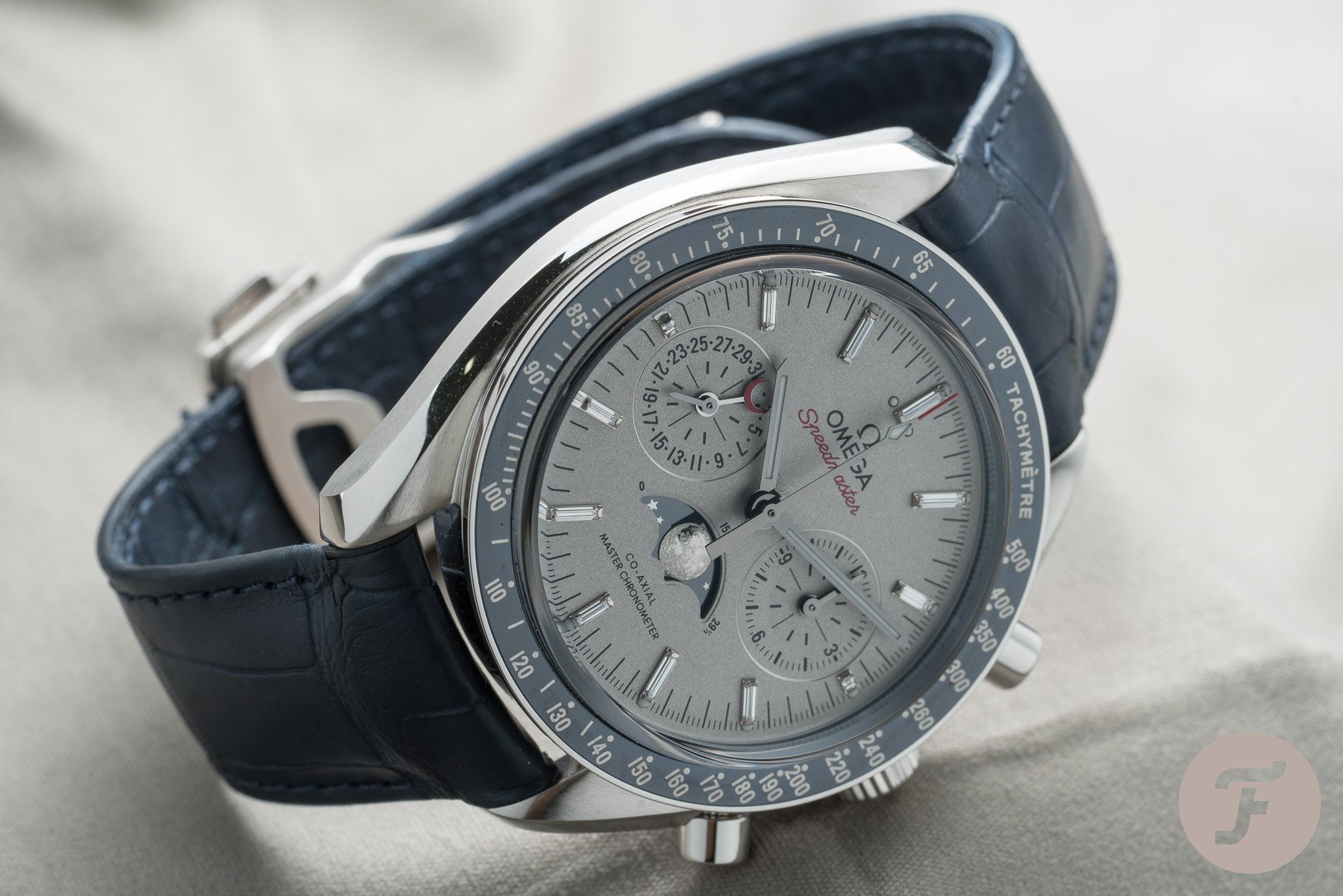 It is not the first time that Omega comes with a platinum Speedmaster model, we’ve seen and covered them in the past here on Fratello. Already in 1994, Omega introduced a Speedmaster in platinum. Two versions actually, one with a black aluminium bezel inlay (50 pieces) and one with diamonds (only 10 pieces).

In 2003, Omega did a run of 57 special edition Speedmasters made of platinum again. Both of these models were skeletonised entirely, by artist Armin Strom (who also did other projects with Omega). Then, in 2009, Omega celebrated the 40th anniversary of the Apollo XI moon landing (and thus the Moonwatch) with a patch model in stainless steel, and one in platinum with a platinum bracelet. Only 69 pieces, with a gold medallion on the 9 o’clock subdial. These originally sold for $135,000.-USD. Years ago, I saw this watch on display in the Omega boutique in New York, and if I am not mistaken, the box was signed by Buzz Aldrin for this special occasion. Then, in 2016, Omega already added a red bezel Speedmaster platinum moonphase to their collection, which we covered here. 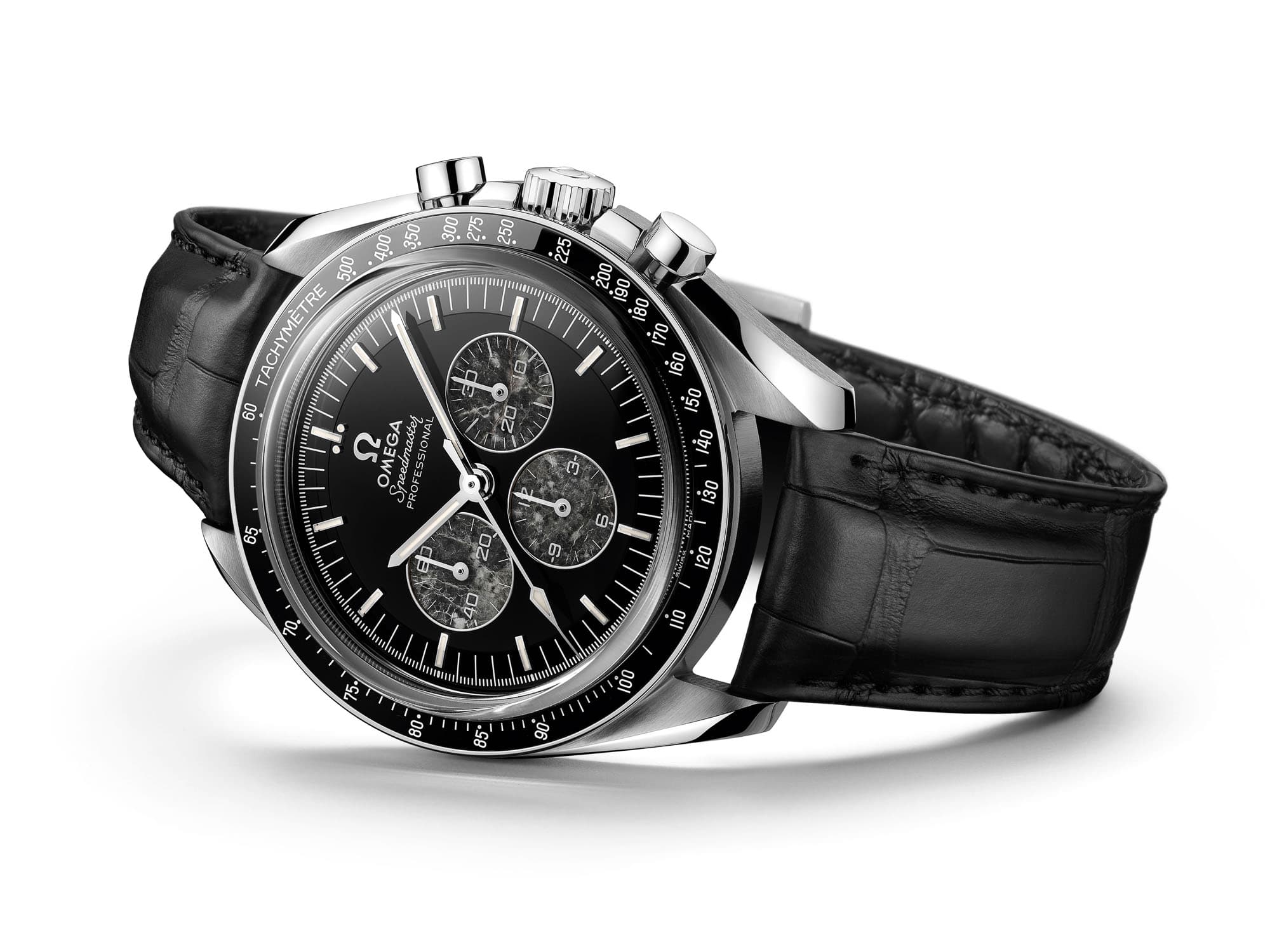 The eye-catcher of this Omega Speedmaster platinum moonphase is, of course, the dial with moonphases indicator. There are two moons, made of platinum using the LiquidMetal technique, on the blue ceramic disc. However, that’s not the only eye-catcher. There’s the dial made of platinum (hence the engraved Pt950 indicator above the center pinion) and the white gold hour indexes are set with baguette-cut diamonds. The platinum dial and baguette-set hour markers might even take away a bit of the shine of the beautiful realistic looking moon on the ceramic disc at 6 o’clock. 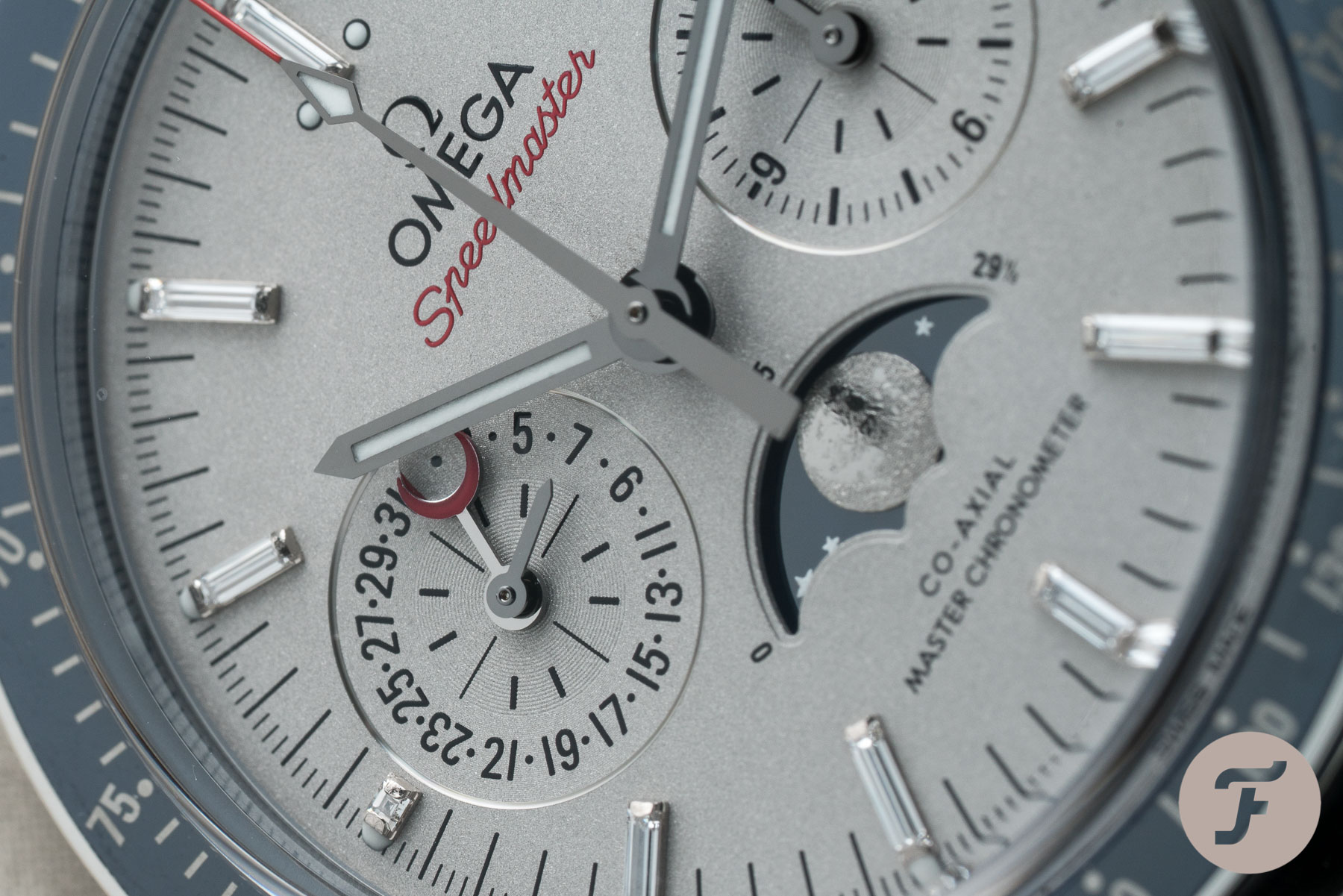 On the dial, besides the time and chronograph, you’ll find of course the beautiful moonphases indicator, and at 9 o’clock, there’s also a date indicator. This date indicator uses a small magnifying glass inside the red ‘croissant’.

As the official model name indicates, the diameter of this Speedmaster Moonphase in platinum is 44.25mm. That’s the same size as the Dark Side of the Moon or any of the other caliber 9300/9900 movement-based Speedmaster models. The last digit can be replaced, based on the material of the case, for example. When a watch is made of gold or platinum, the movement will have a gold rotor and bridge. For this Speedmaster platinum Moonphase, it is the Omega caliber 9905 movement. Anyways, the diameter of the watch is quite OK on the wrist. I usually wear only 42mm Speedmaster models myself, but on my 18/19cm wrist, I can handle a 44.25mm Speedmaster as well. As always, it is recommended that you first try it on your wrist before you purchase the watch. The 44.25mm diameter sounds more substantial than it wears in this case, you’ll be positively surprised. 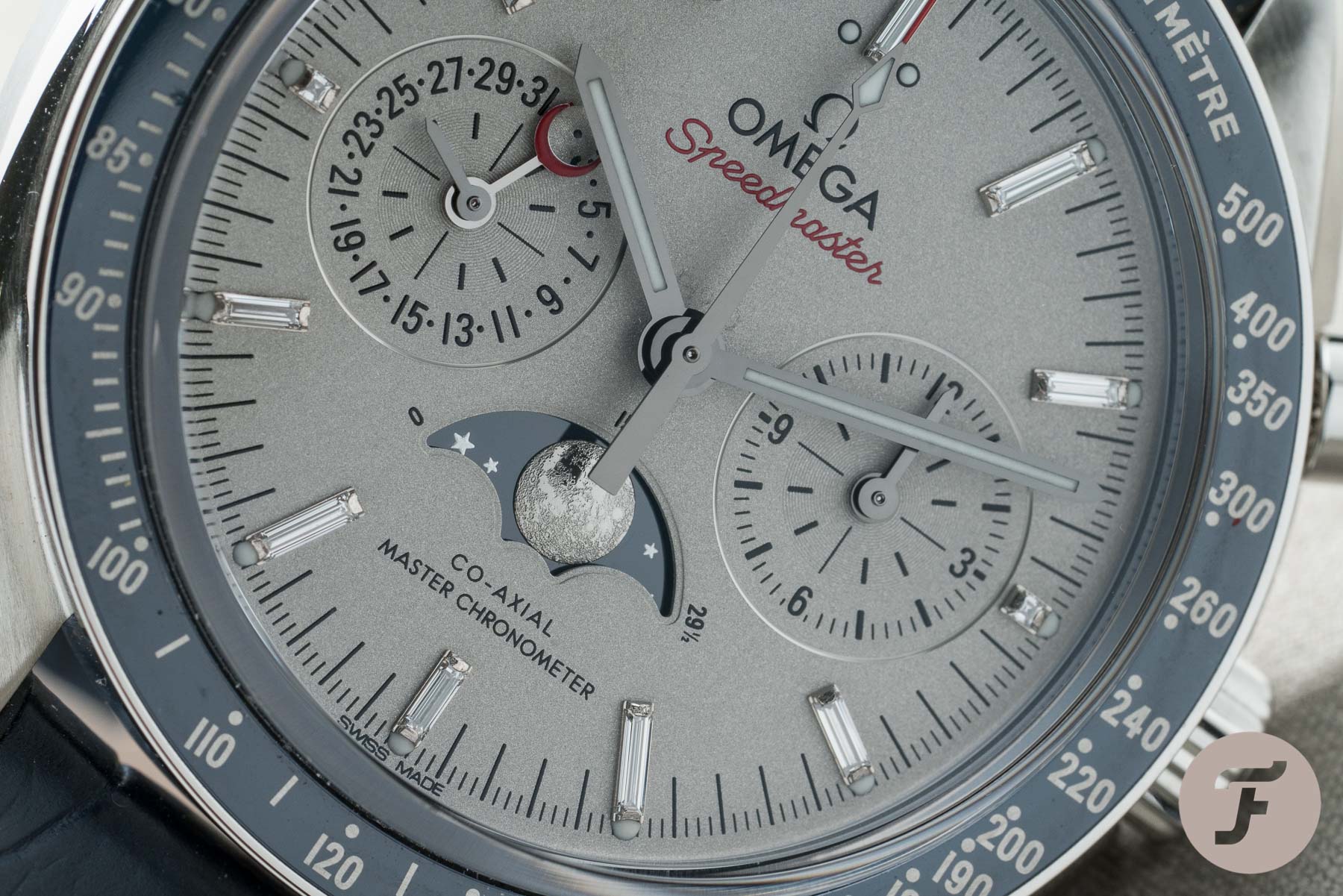 The white gold coloured hands give enough contrast on the platinum dial for a quick and easy read-out. But, to be honest, I think reading time on this watch is not a priority. You wear this because you love the platinum dial, the baguette-set hour markers and the colour blue (in this case). For me, it would be the green version with emerald I prefer, so the colour scheme plays an important role. This particular model comes with a blue ceramic bezel and blue alligator strap.

As previously mentioned, the movement inside this Speedmaster platinum moonphase is their caliber 9905 with Master Chronometer certificate. The METAS organisation is involved in testing all watches against Omega’s high standards and once passed; it will be certified as Master Chronometer. The Co-Axial escapement, use of silicon and the anti-magnetic movement materials used all play a significant role in the accuracy of the watch and its resistance against magnetic fields. Accuracy is guaranteed to be between 0 and +5 seconds per day on average, no matter its exposure to magnetic fields (up to 15,000 gauss). Omega warrantees their watches for 5 years. 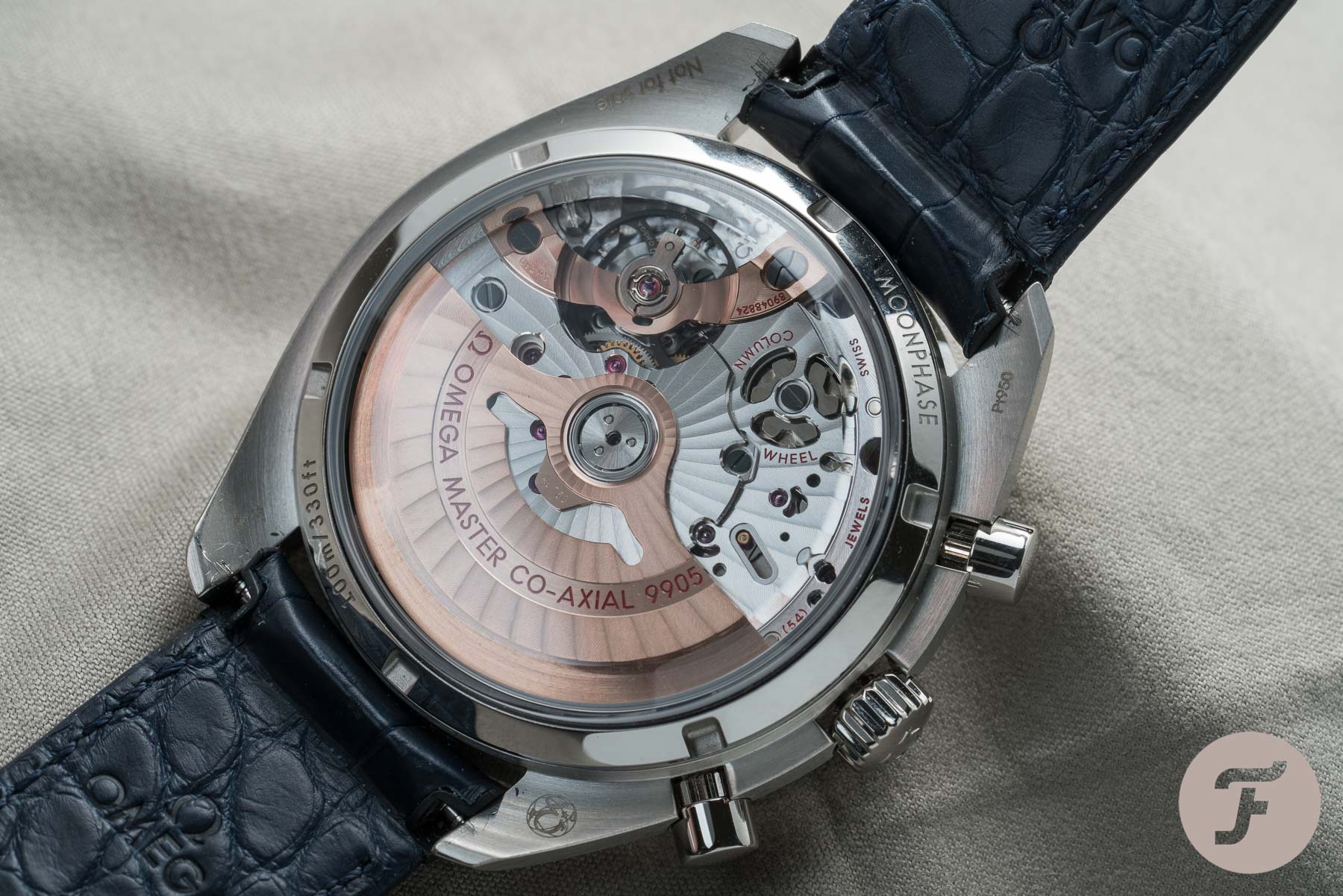 A sapphire case back shows the 18-carat Sedna gold rotor and balance-wheel bridge. The movement is finished with beautiful Geneva waves in arabesque. You are also able to see the column-wheel mechanism of the chronograph. Two barrels mounted in series result in a total power reserve of 60 hours.

The thought that a Speedmaster needs to be in steel is outmoded. A few decades ago, a steel Moonwatch was a tool. Today, like it or not, a watch like the Speedmaster is a luxury item. You don’t need it, you want to need it perhaps, but from a functional perspective, a wristwatch is quite obsolete today. That said if you are a true believer that a watch that was once a piece of professional equipment needs to be in steel, stick to steel. I mean, I love steel watches, and I love the look of a tool watch (or a watch that was once a tool watch), it is one of the reasons the Speedmaster Speedy Tuesday received its brushed case finish. So nothing wrong with the nostalgic feel towards steel for watches such as the Speedmaster for example, but I also am a firm believer that these watches are perfectly fine in precious metal as well. 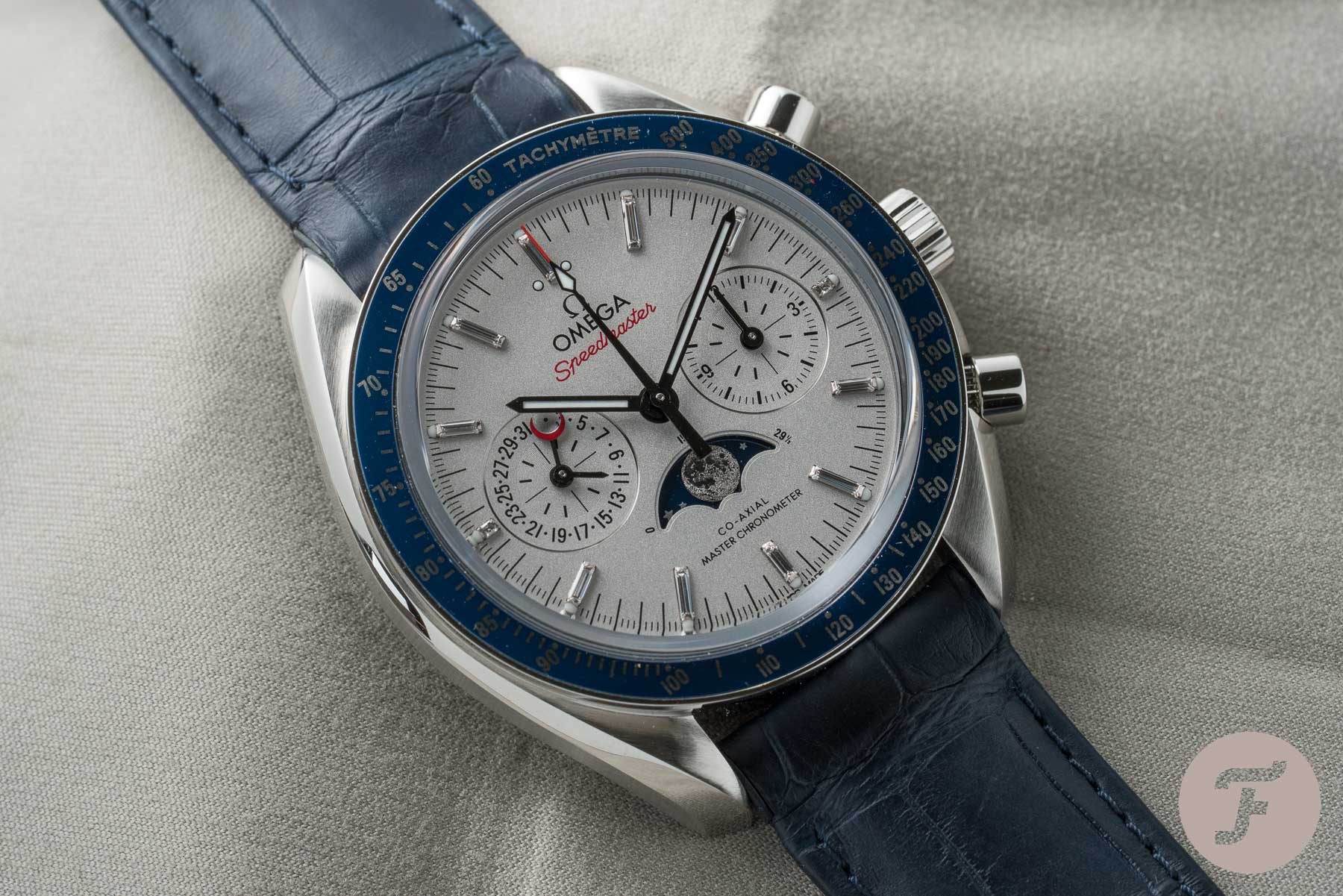 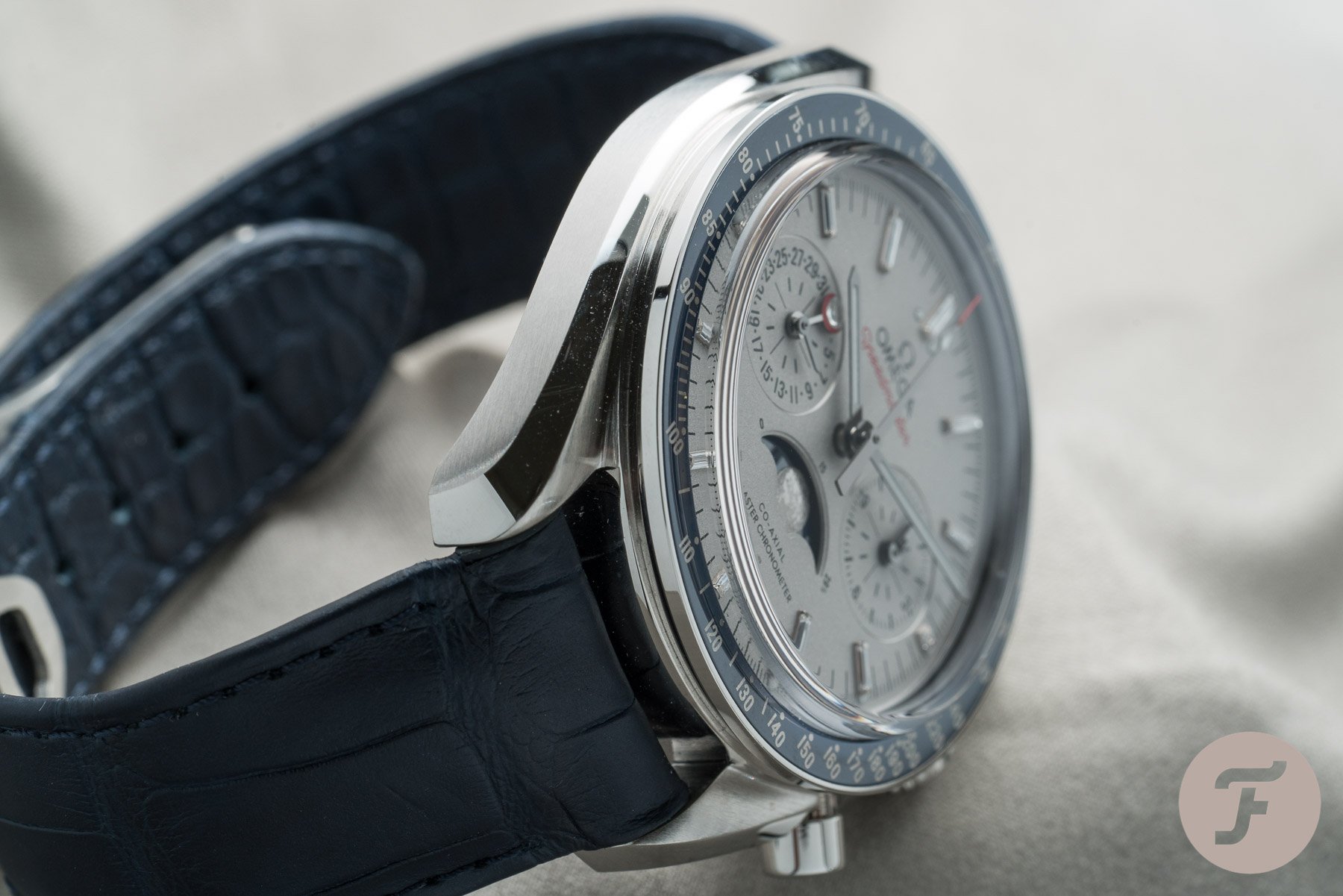 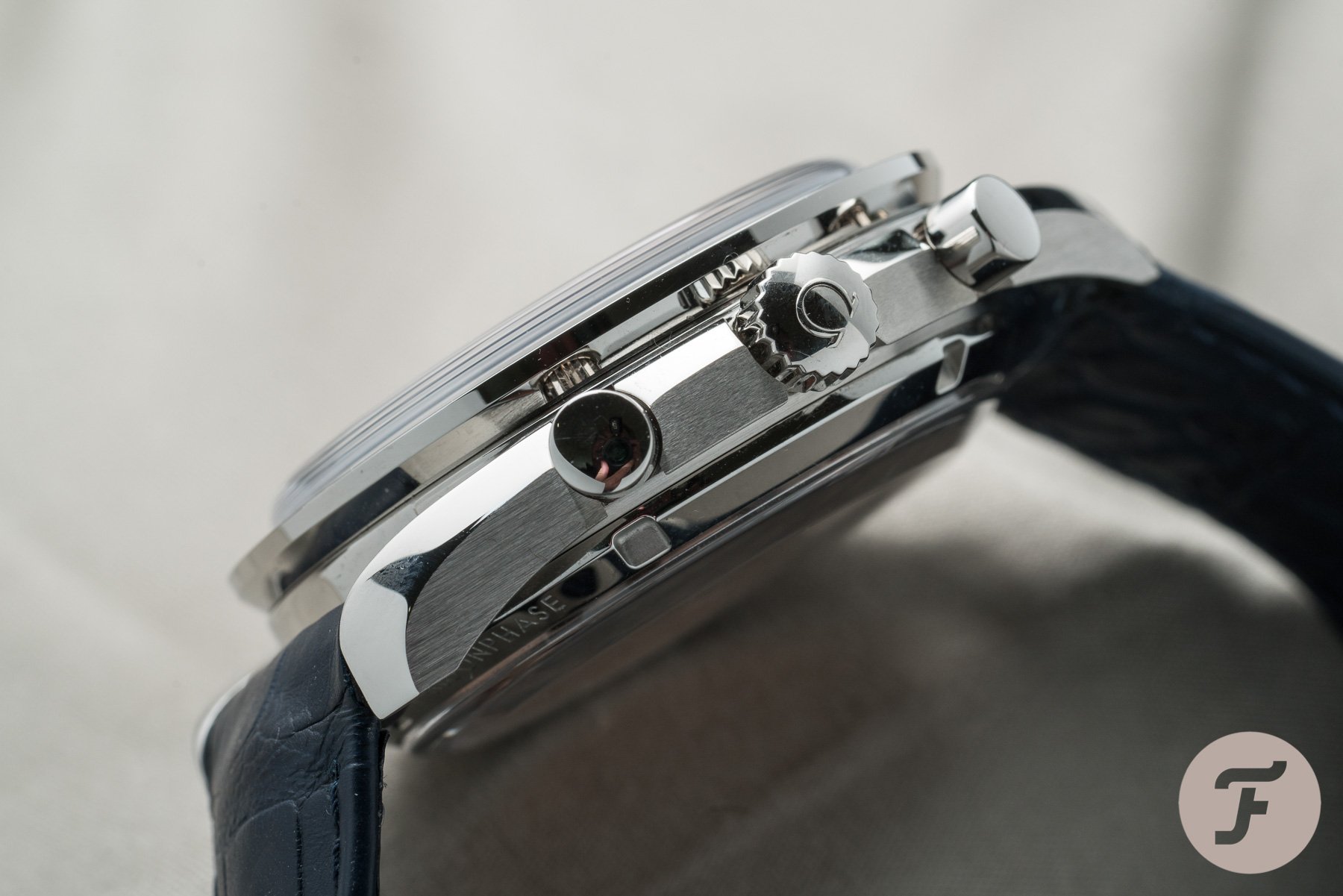 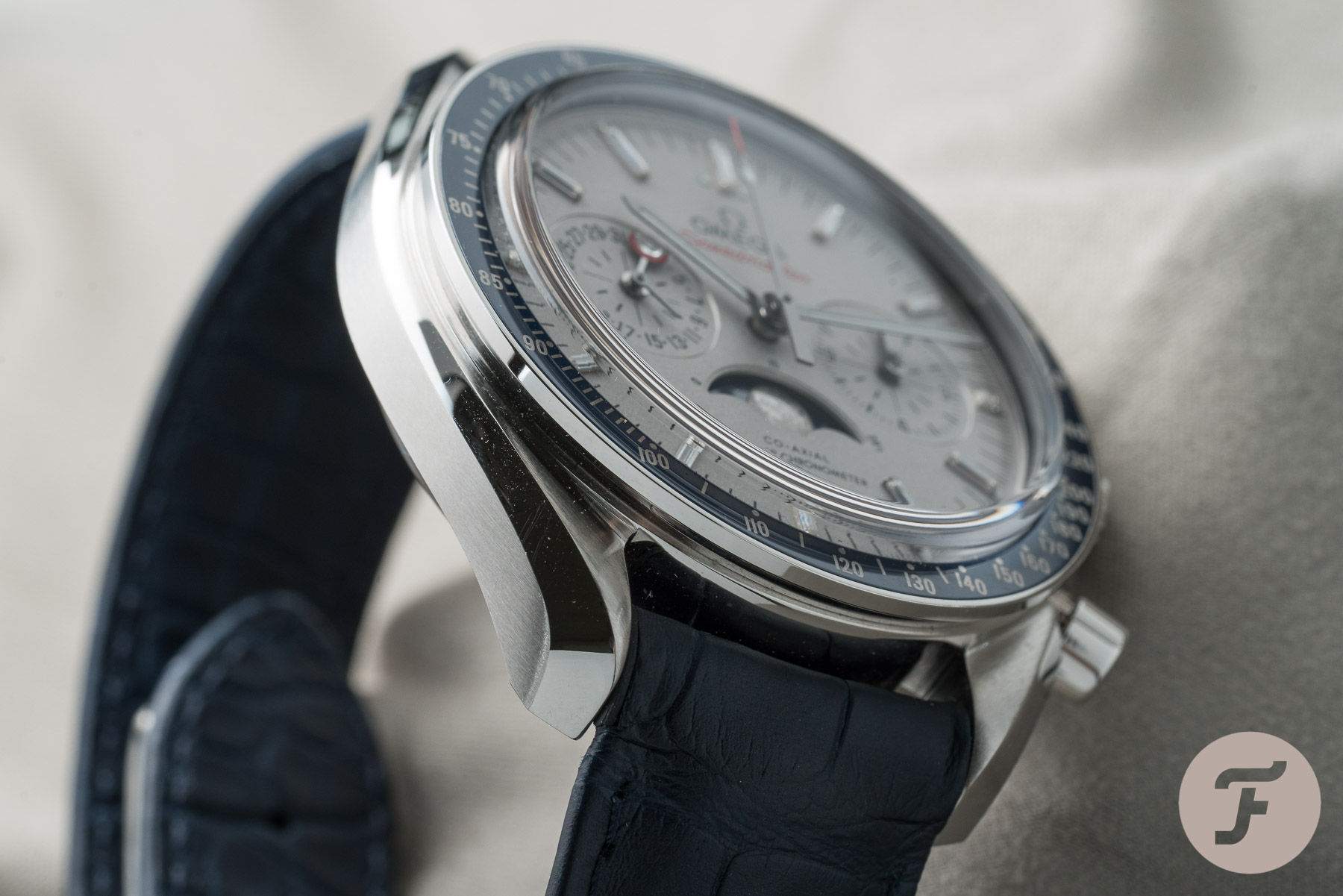 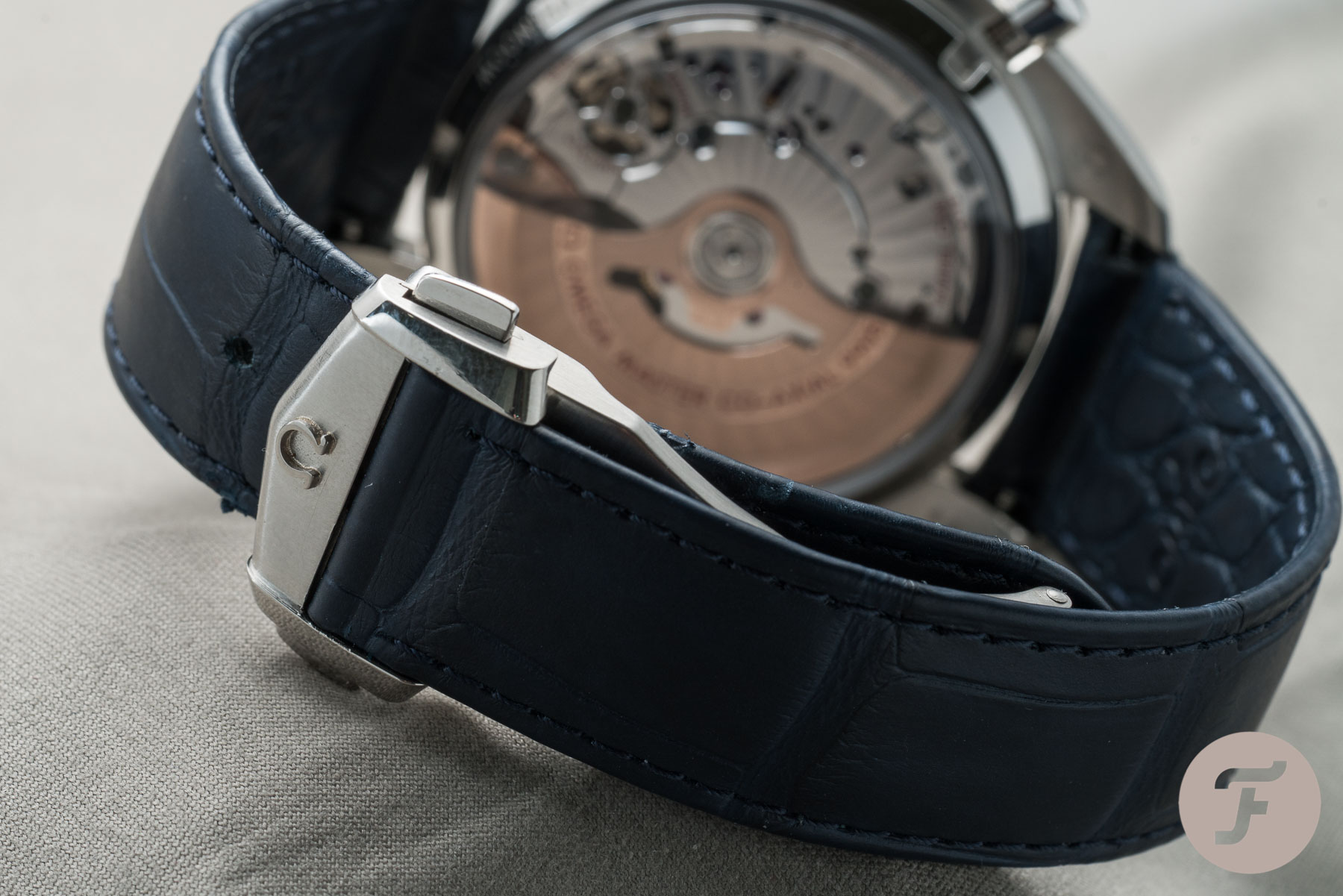 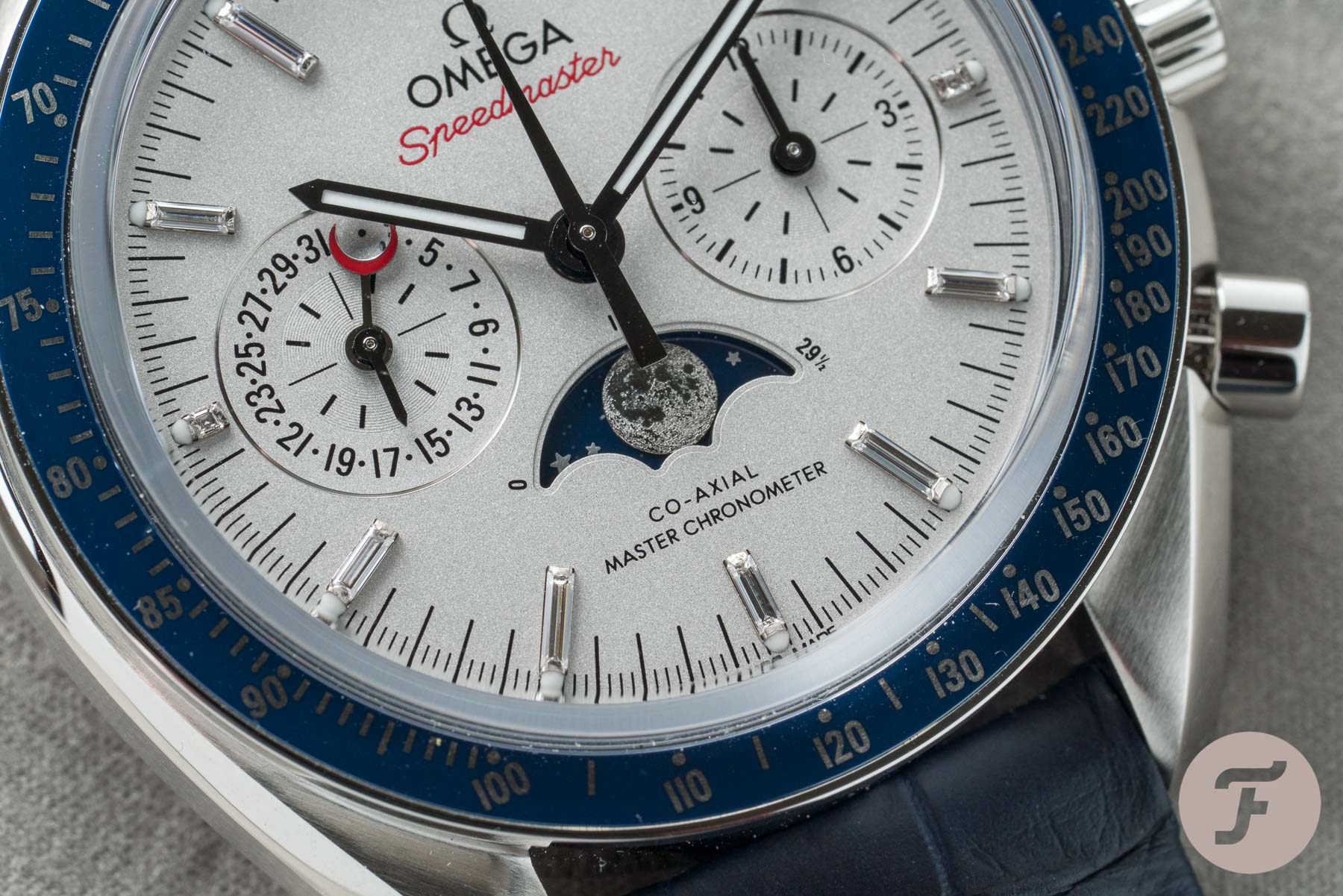 With a retail price of €51.300,- (including VAT) for this blue Speedmaster platinum Moonphase, it has the same price as the red version with baguette-cut rubies on the hour markers. Only the green version with its baguette-cut emeralds is more expensive, at €58.400,-. If you are into larger watches, with precious stones and a moon phase, this is the Speedmaster to aim for. However, for around the same price, Omega recently introduced their Speedmaster caliber 321 in platinum. That has a stunning onyx dial and lunar meteorite subdials. That would be my pick, for sure. Not only because of the caliber 321 movement (as that one will be available in steel as well), but the onyx dial is simply stunning! Also, the design and dimensions of that particular watch are based on the Moonwatch 105.012 reference. I think the bigger point is that Omega has made some Speedmaster models available in this costly segment, as they feel the market is ready for it. Would I have preferred the initially introduced version on a platinum bracelet? Perhaps so, but I also remember from that time that a watch that weighs half a kilo isn’t comfortable.

All specifications can be found below, and more information can also be found via Omega online.

Do you want to share your story about your Speedmaster with us? Make sure to drop us a note.