You choose who marches on to the Quarter Finals!
Ben Hodges
comments 26
Share

Welcome to the Speedmaster World Cup. In the absence of Euro 2020, we thought our beloved readers might enjoy a tournament of a different kind. We’ve assembled eight groups (A – H), each governed by a different Fratello team member. Each writer has been assigned four watches, which they will pitch to you during the group stages.

All we need you to do is vote for your favorite to move on in the competition. The next round will be the quarter-finals, which will see the eight group winners go head-to-head for your votes. The four winners progress to the semis. Following that, a third-place play-off will precede the final round, due to be held on Sunday, December 13th (get the beers in …).

If you haven’t done so yet, also make sure to cast your votes for the Speeedmasters in group A, group C, and group D.

In some ways, I have a lot to owe to the Fratello Watches #SpeedyTuesday social movement — not in the way you may think, however. You see, social media is a gateway to see personal pictures of anybody with an account. But as it is widely used for a variety of topics, it is easy to get lost. By having a dedicated hashtag used exclusively by Omega Speedmaster enthusiasts, I was able to focus on that hashtag and view many owner’s pictures. What I discovered was a fascinating array of Speedys that covered the breadth and width of all the generations and rare editions.

The Omega website listed the current watches in the range, but not necessarily historical models or Speedys with limited availability. To add to this, the catalog images were very static with fully lit studio lighting. For good reason, of course, to show each facet of the watch in explicit detail. But I had no sense of what they looked like outside in the real world. My Group is a testament to the spirit of the #SpeedyTuesday movement — unconventional versions of the Speedmaster that pay back the community with the same level of enthusiasm.

Without further ado, as RJ would say, allow me to present the watches of Group B. 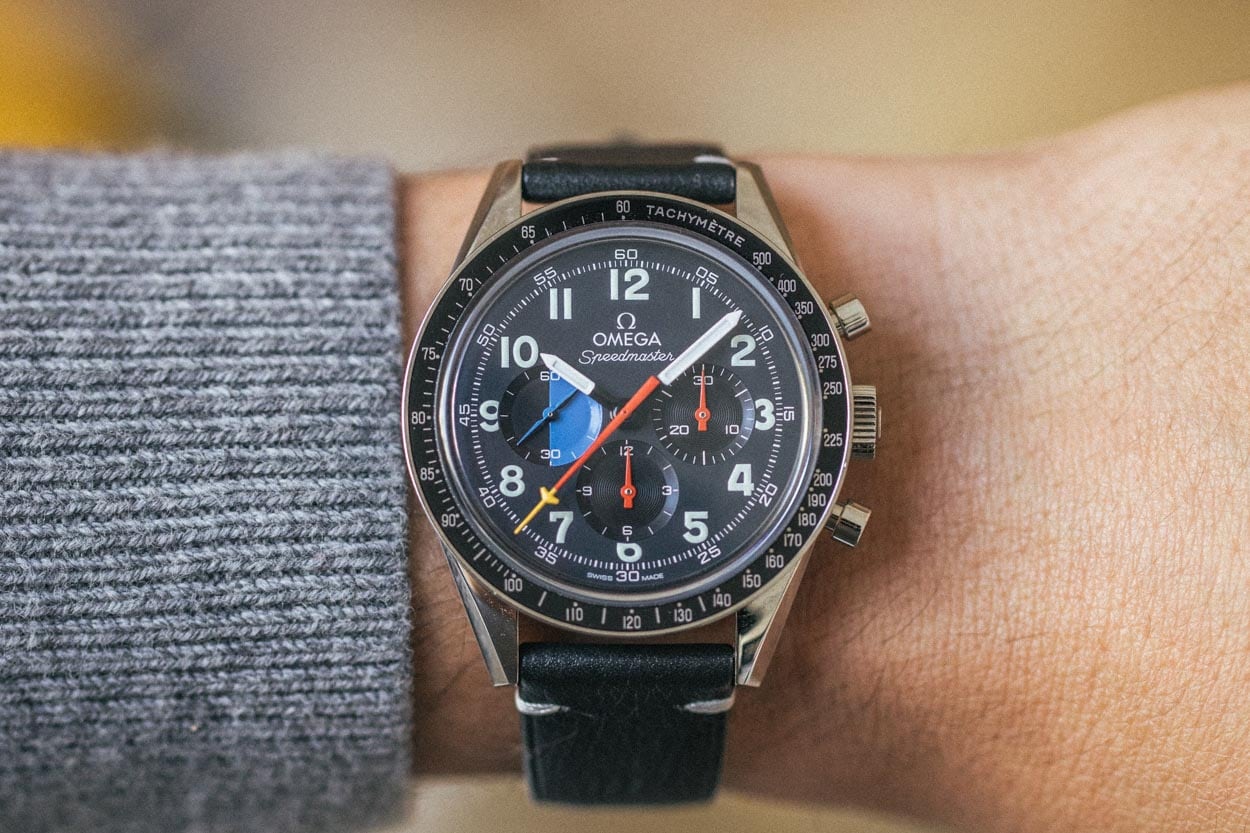 On the 5th September 2018, Hodinkee announced a special edition Omega Speedmaster to mark its tenth anniversary. Within eighteen minutes, all 500 pieces had sold out. To backtrack, this Speedmaster took things to a personal level. The H10 took inspiration from the first Swiss watch that Hodinkee founder Ben Clymer received from his grandfather when he was sixteen. The “Mark 40”, or reference 3820.53, Speedmaster from 1996 had the Valjoux 7750 automatic calendar. This Speedy was technically impressive, but not particularly sought after. Yet, it sparked an interest in Clymer that led to the creation of Hodinkee in 2008.

Ten years later, Hodinkee would become a powerhouse of luxury goods and media. While watches were the kindling, Hodinkee represents an aspirational lifestyle in multimedia, with a vast array of limited edition and vintage products in its e-commerce shop. 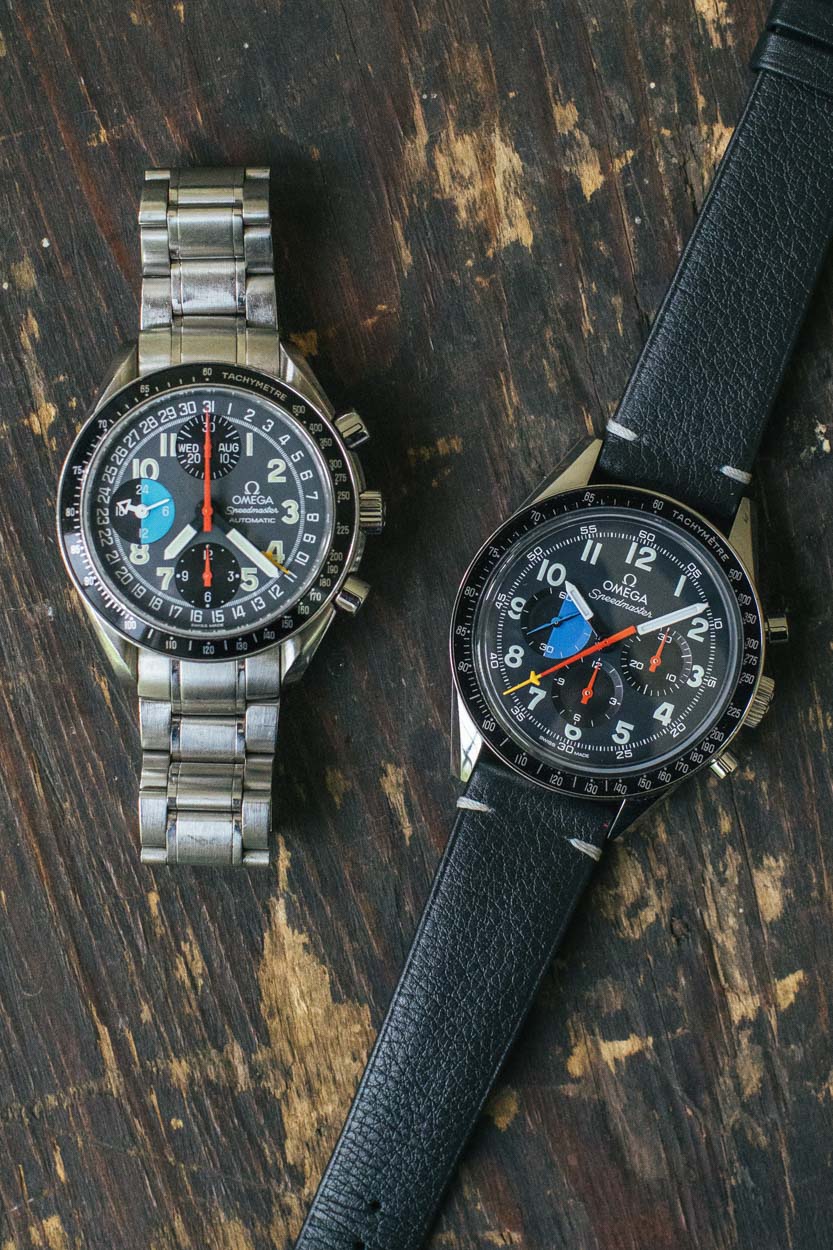 When Hodinkee approached Omega to collaborate, there was only one watch design in mind — the Speedmaster “Mark 40”. Essentially, the base of the re-edition Speedmaster H10 is the “First Omega in Space”. The H10 shares the same 39.7mm steel case, caliber 1861 manual wind movement, and black aluminum bezel. However, the dial is where the H10 pays homage to Clymer’s watch. A half-moon blue/black running seconds sub-dial and minute track mimics the peripheral date function from the 1996 “Mark 40”. And rare, for a Speedmaster, are the Arabic numerals at each marker.

Red represents the stopwatch functions, including the hours minutes and seconds.

The layout of the hands and colors was interesting. Red represents the stopwatch functions, including the hours and minutes. The central chronograph seconds hand combines the red of the central seconds hand of the “Mark 40” and the yellow arrow tip from the date hand. Quite a cool combo to include this despite the lack of date feature on the H10. The H10 dial also has more of a blue to grey hue rather than the typical matte black.

It may not be a direct vintage re-edition, but the H10 does retain the printed Omega logo rather than an applied logo — just like the original. At retail, this model was $6,500, which was $1,200 more than a “First Omega in Space”. However, the price included international shipping, an extended warranty, and two additional straps — a gray NATO and a twin-stitch leather that both fit the 19mm lugs. 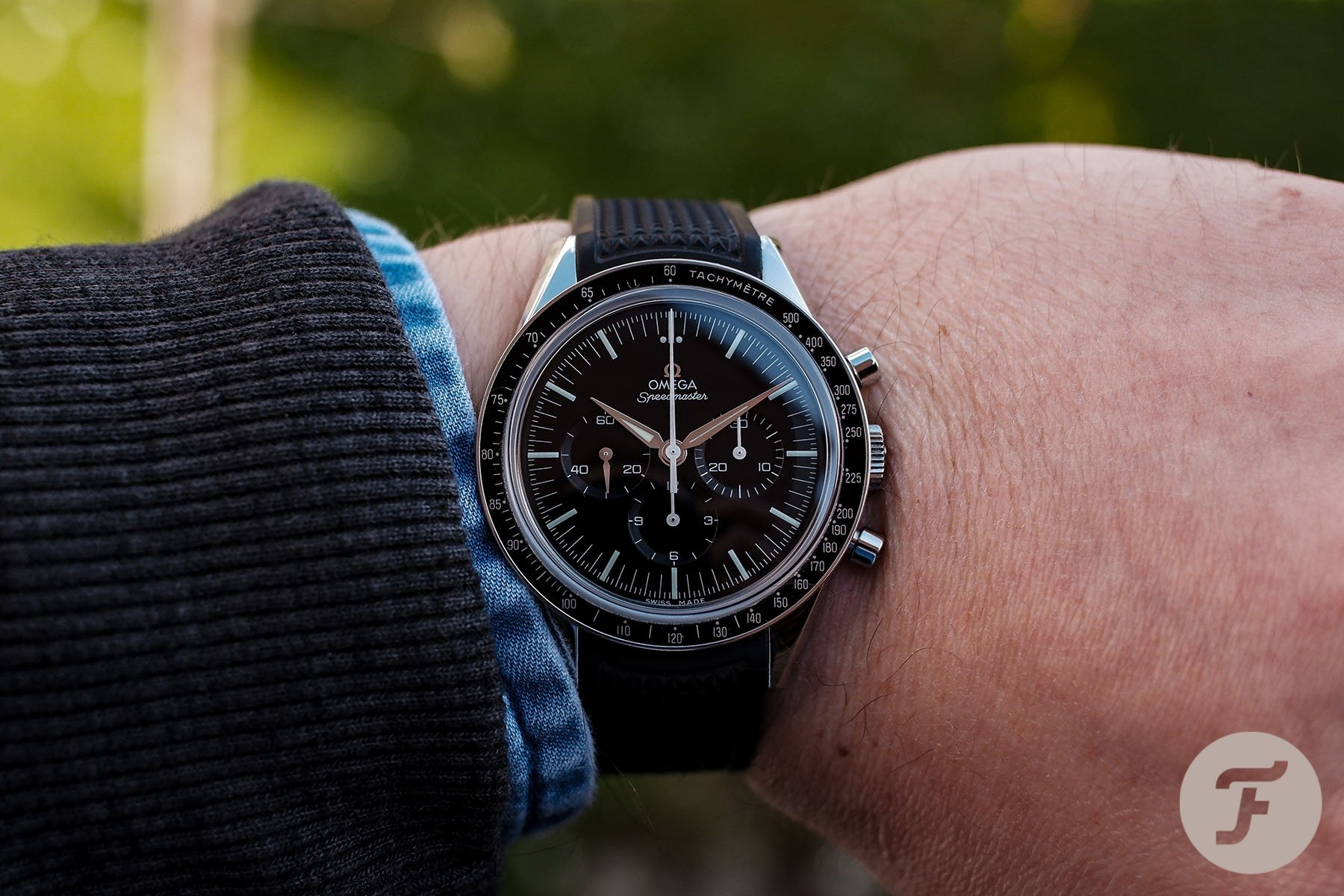 This is the watch that celebrates fifty years since Walter Schirra orbited the Earth six times in his Sigma 7 capsule. Not only that, but Wally was wearing the first-ever Omega to break through the stratosphere.

Walter Schirra was a character. An astute mathematician, an adept pilot, but also a real man’s man. You get the sense he led, and others followed. Schirra first used an unmodified Hasselblad 500C camera with a Zeiss lens on his Mercury-Atlas 8 mission. Long before Hasselblad became the defacto choice for the Apollo missions. And on his wrist was the Omega Speedmaster CK2998 that he bought in Houston in 1962 — two years and five months before the Omega Speedmaster was flight-qualified for manned space missions. 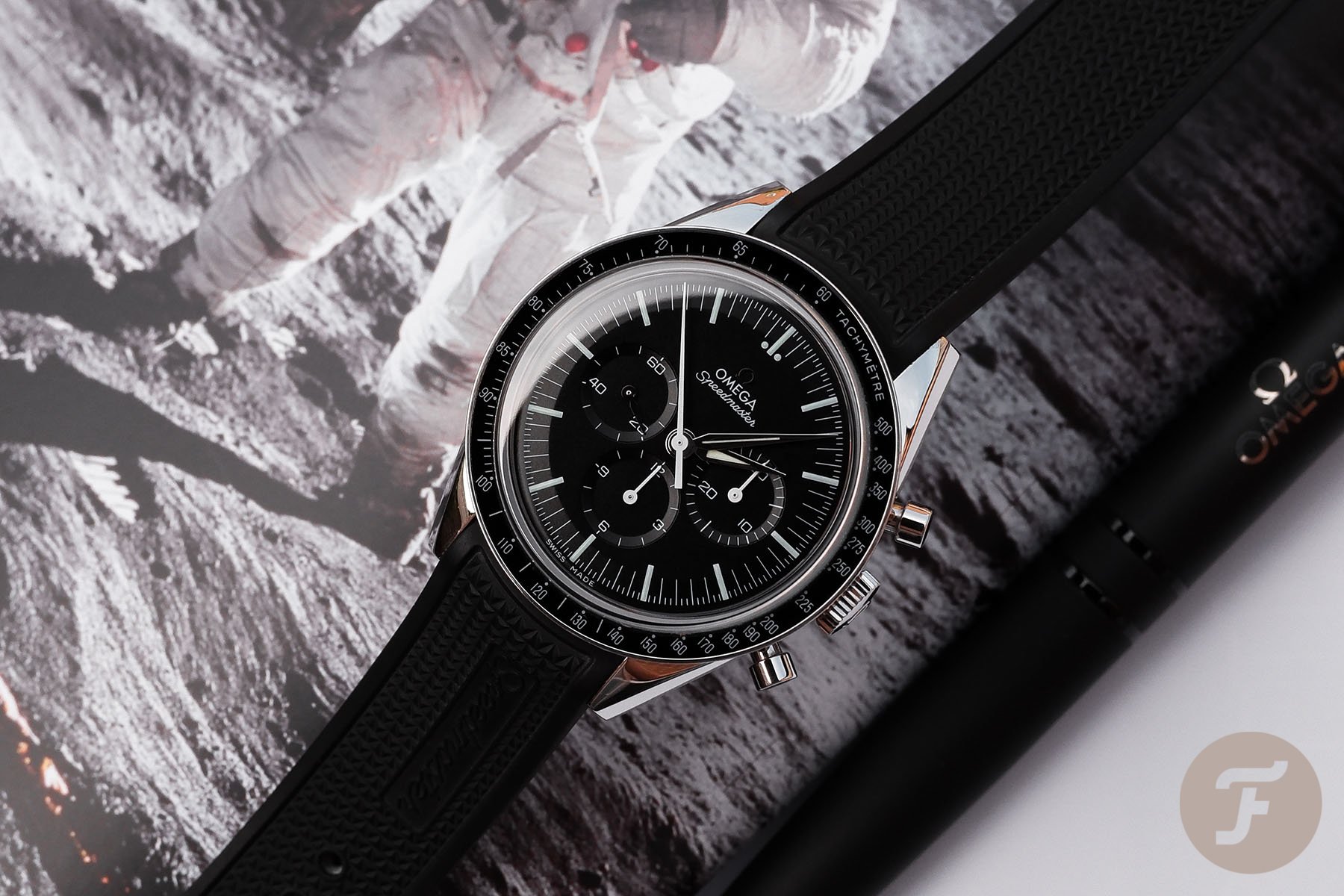 The Fratello team was present and correct for the launch. The “First Omega in Space”, that is, not the Atlas rocket. We covered the specifications here. I am glad that the First Omega in space is in my group for the World Cup. After five years of ownership, I have never once written about it.

I was on the hunt for a mechanical chronograph at the time. I was also swept up in the wave of passion that was emanating from the Fratello Watches #SpeedyTuesday social movement. A search for the hashtag eventually brought the FOIS to my full attention. Coincidentally, both this watch and #SpeedyTuesday started in the same year — 2012. 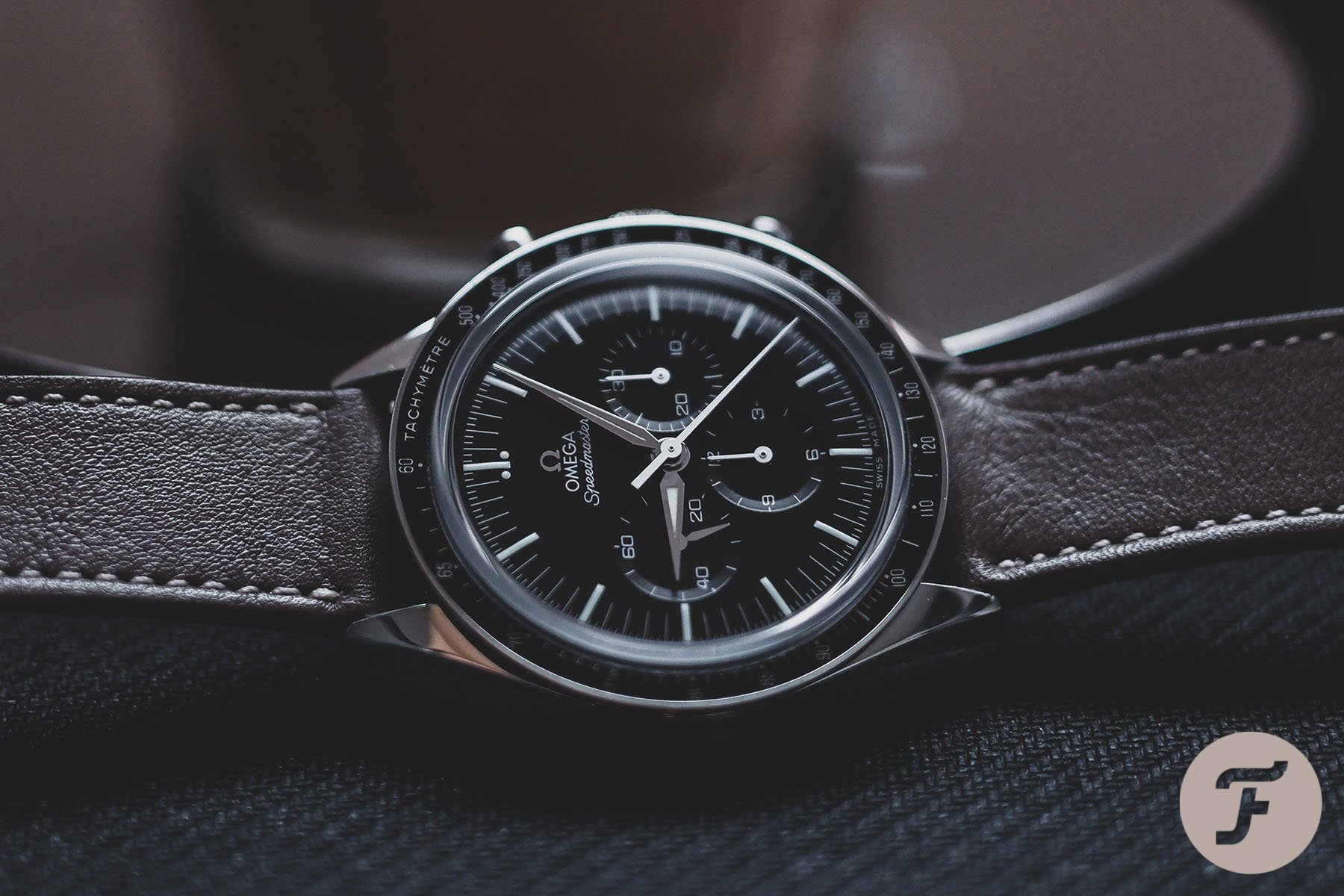 The “First Omega in Space” pays homage to the Omega Speedmaster CK2998 that Schirra bought in Houston in 1962. Alpha hands, no professional on the dial, and no crown guards — all features that appealed to me over the standard Speedmaster Professional. I was also more drawn to the sapphire crystal and applied Omega logo too. But, weirdly, the feature that had me reaching for my wallet was the sub-dial design. On the “First Omega in Space” the sub-dials appear slightly more recessed — a bit like deep moon craters, if you will. These features stood out to me through the portal of social media apps. And when I saw the real deal, it impressed me even further. My wallet was less impressed with the $5,300 deduction. 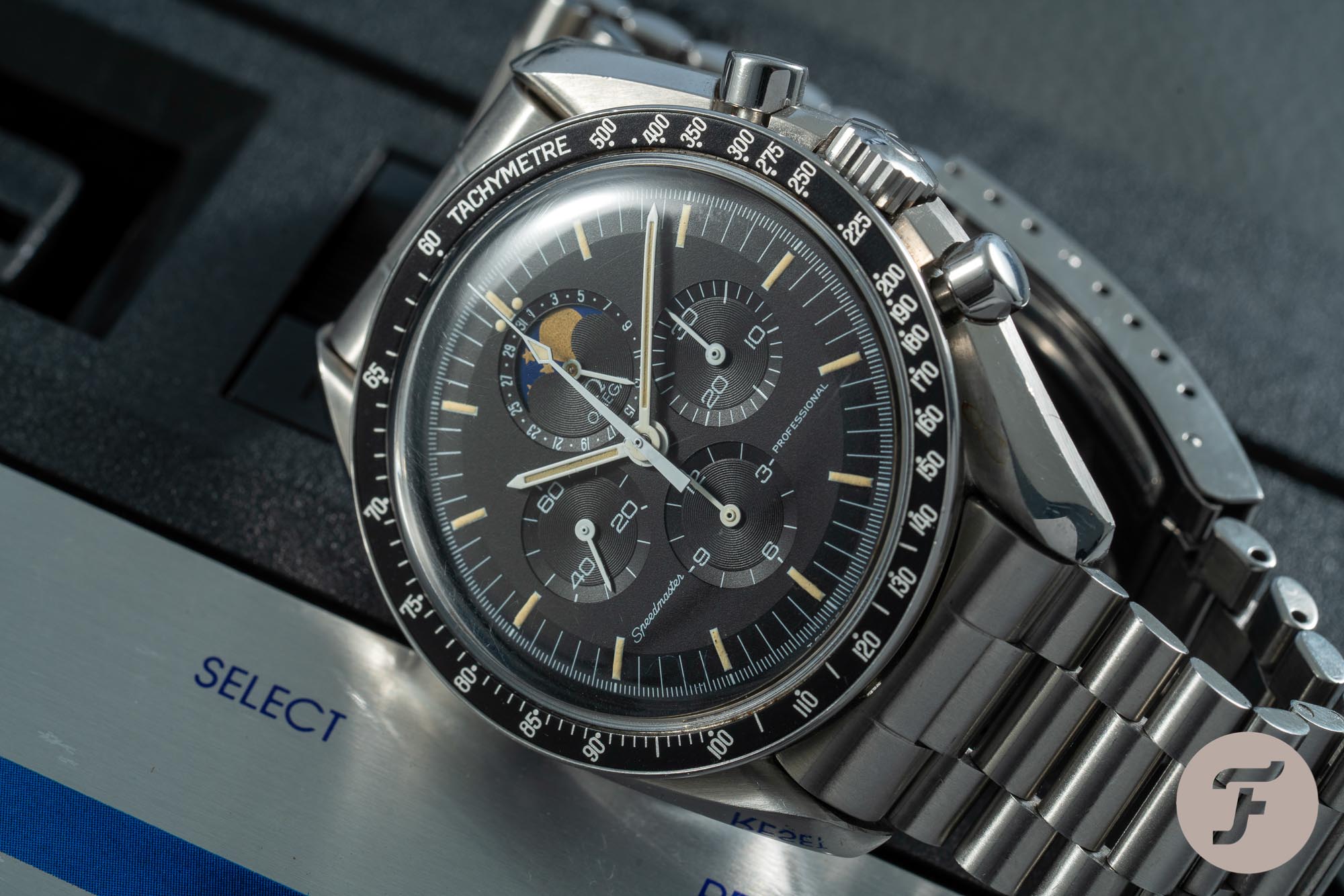 Well, it only makes sense for a moon-phase indicator to be on an Omega Moonwatch. I’ve always been interested in watches illustrating solar and lunar phases. It amazes me how an object so small can indicate something so grand. The moon phase indicator may have limited usability, but, as a yachtsman, I’ve personally used moon phase indicators to understand the possible tidal differences.

Omega Speedmaster 345.0809 dial not only adds a splash of color but is a useful tool to check the lunar cycle just from a glance at your wrist.

The English Channel has large tidal fluctuations. Knowing the high and low tide can be the difference between being able to enter a marina at the desired time or having to moor elsewhere (or on a buoy). And unless you know the current lunar cycle dates, you cannot easily tell if the moon is waxing or waning by merely looking at it. Thankfully, a beautiful moon phase indication on this Omega Speedmaster 345.0809 dial not only adds a splash of color but is a useful tool to check the lunar cycle just from a glance at your wrist. 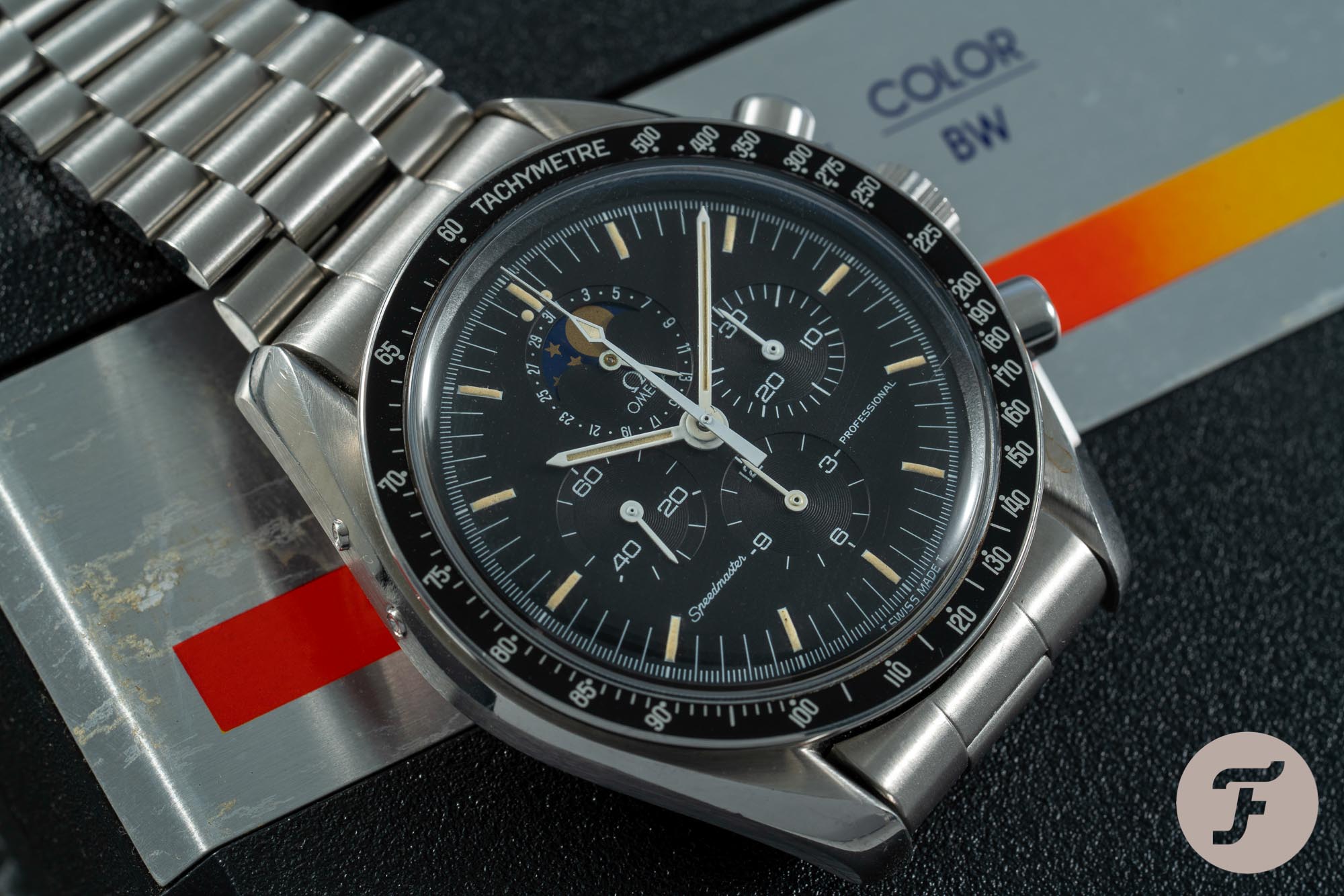 Limited to 1,300 pieces, the Speedmaster Moon was a child of the ’80s, just like me, that was produced from 1985 to 1989. The limitation of the watch and desirability of the date and moon complication, makes the Ref. 345.0809 quite an auction darling, with prices around $15,000. Having a moon-phase Speedmaster in my group gives me quite an advantage. While the dial may seem complex at first, I find Omega’s spacing of the sub-dials evens out the typical 3, 6, 9 layout without seeming top-heavy. 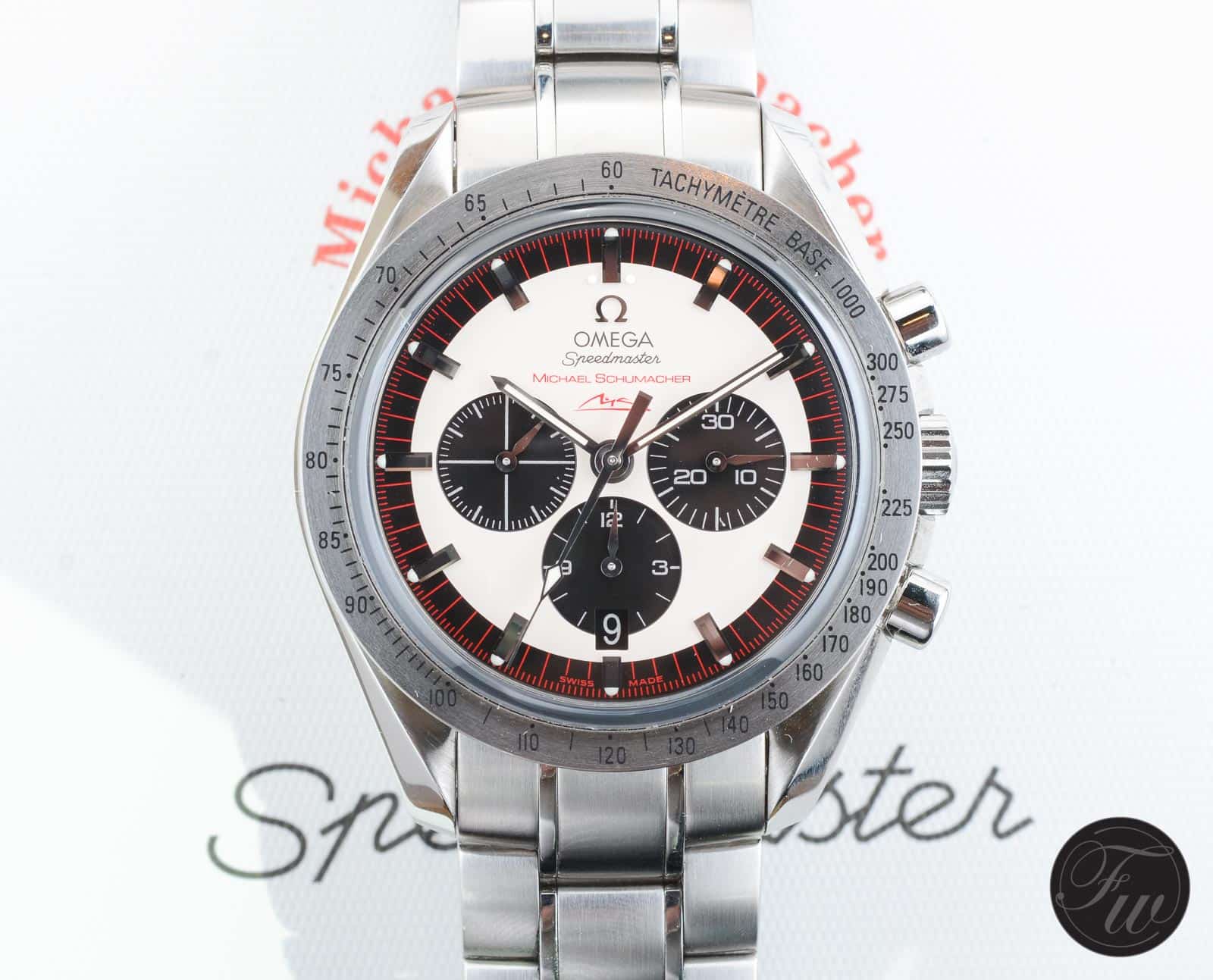 Last in my group is possibly as far from the Moonwatch as it’s possible to get. But let me entertain a theory. If — somehow — the Omega Speedmaster had never been qualified by NASA, motorsports would still be the main crux of the collection. While the Speedmaster Ref. 3553.32 certainly lacks space credentials, I feel it would’ve been the natural evolution of the racing Speedmaster of 1957. As if it bypassed NASA.

There’s no getting around it, the results look remarkably similar to the early Rolex Daytonas with “Exotic” dials.

Omega would still be aiming for great heights, however. And there is possibly no peak greater in motorsports than Michael Schumacher’s dominance in a Ferrari in the early 2000s. Schumacher had a hand in designing this Special Edition Speedy when he was an ambassador for Omega. But there’s no getting around it, the results look remarkably similar to the early Rolex Daytonas with “Exotic” dials. But its been open season on that front ever since Rolex gave up the “Exotic” dials in the early ‘80s. 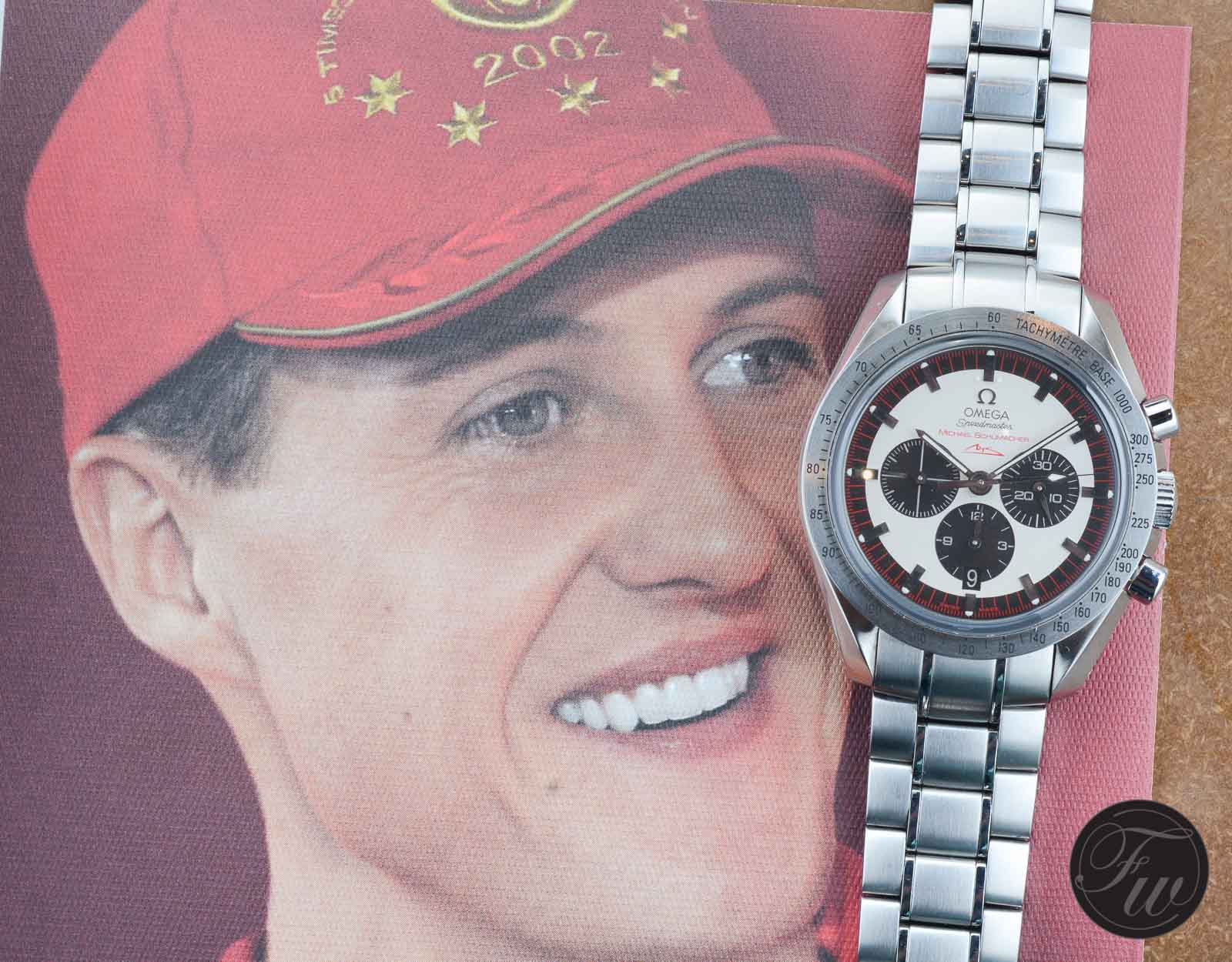 This particular Speedy reference commemorates Schumacher’s sixth world title and Ferrari’s fourth constructor’s title in succession in 2003. Unlike the previous seasons at the turn of the millennium, the 2003 season was a close battle. Regulation changes brought McLaren into contention and runner-up, Kimi Räikkönen, finished two-points shy of Schumacher by the final race. Initially, 6,000 pieces of the Ref. 3559.32 celebrated the championship. But my selection for this group is the far rarer 3553.32 of 500 pieces.

Both have a panda dial, steel bezel, and red outer track. They also share the Omega caliber 3301 with automatic winding and date at 6 o’clock. Yet, the little red Schumacher signature below “Professional” garners huge demand due to the limitation and provenance of this piece. Learn more about Omega by visiting the official brand website here.

Now the ball is in your court. Who is progressing to the next stage from my group? Vote below and let me know your choice in the comments section.

If you haven’t done so yet, also make sure to cast your votes for the Speeedmasters in group A, group C, and group D.