Opinion On The New Calibre 400 From An Oris Aquis Owner

Could this spell the end for the Sellita-powered Aquis?
Ben Hodges
comments 5
Share

The end of October brought a flurry of news surrounding the new Calibre 400 Aquis. A lot of the usual press channels covered the details. But what was interesting was the number of influencers on social media sharing their shots of the watch. Oris, in its wisdom, sent out examples of the new Aquis to many in the community to maximize its reach under COVID-19 restrictions. Smart move, but with the dust settling and social media checks clearing, what do current Aquis owners think of the new Calibre 400?

Robert-Jan Broer went into great depth with his hands-on review of the new Aquis Calibre 400. I am pleased, but not too surprised that he was captivated by the blue gradient dial. The sunburst Aquis dials are something I have been bleating about for the Aquis for a couple of years now. The effect is something else. It’s not always apparent from the press images, but the way these dials interact with light is really very special. What’s also unclear are specific details that Oris are keen to highlight in the press kits. 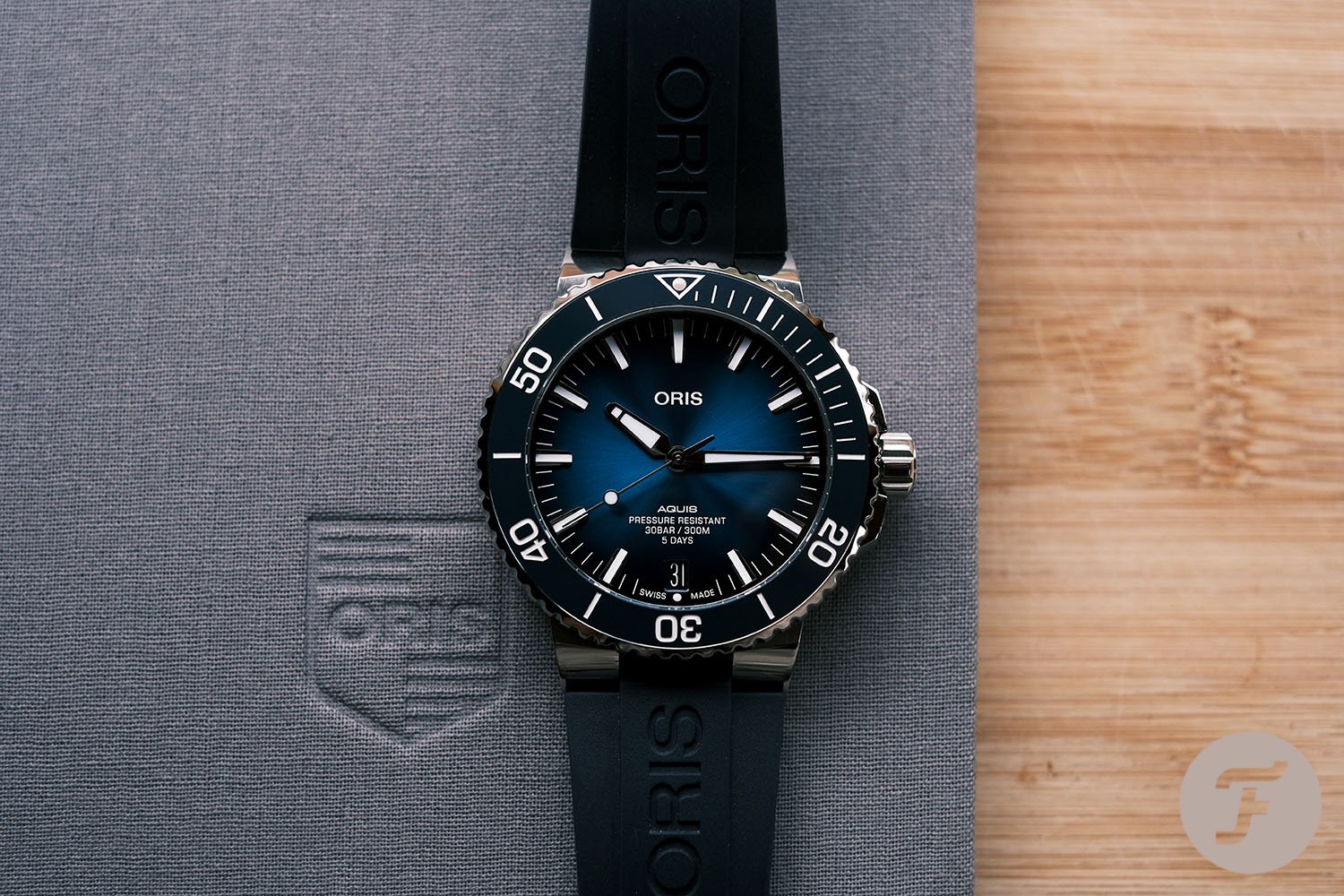 The Calibre 400 — more of a whisper than a shout

Oris went to great lengths to explain how the date window now had white numerals on a black date disc and that the window was slightly bigger. I am not too sure about either fact, as I have seen color-matching date windows in the Aquis before. And the window may be bigger but almost imperceptibly so. More importantly, in my view, is that the movement proportionally fills the case-back view. That allows the position of the date window to move towards the outer edge of the dial.

The only discernible difference is the “5 Days” after the pressure resistance.

First impressions then — I have to say, the dial of the Calibre 400 was somewhat underwhelming. Not the layout, nor the color, but simply because it did not feel different enough. We have seen an incredibly similar gradient shade in the form of the Aquis Clean Ocean and Clipperton before, albeit a slightly lighter, greener hue. The only discernible difference is the “5 Days” after the pressure resistance. It’s commendable that Oris has placed its faith in the new movement to distinguish this watch from its forerunners. That’s a vote of confidence, for sure. However, I must admit I would have liked to see something more aesthetically novel to celebrate such a milestone occasion for the brand. 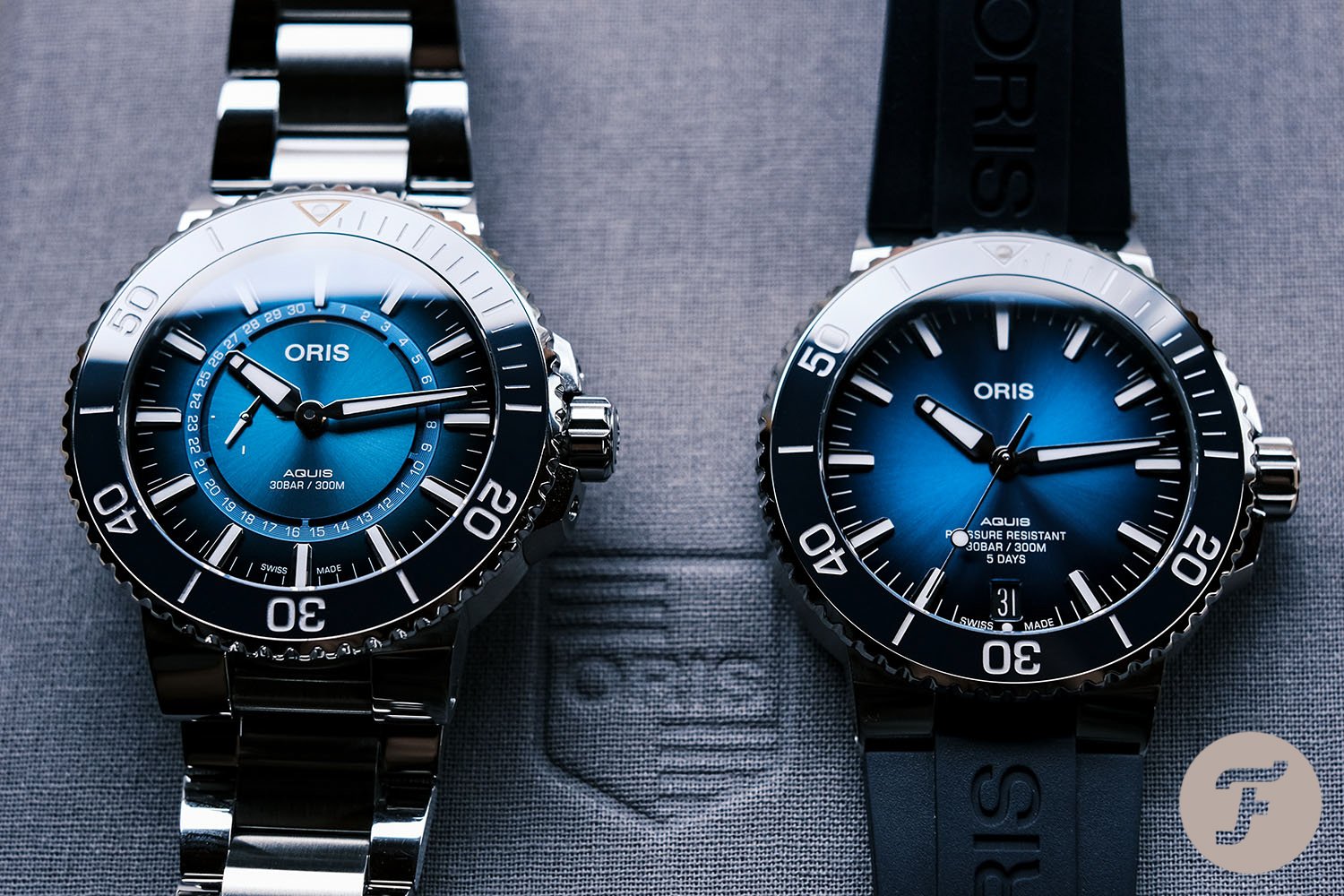 Comparison with my Aquis

For this op-ed, I felt the need to put the Calibre 400 up against my own Aquis Great Barrier Reef III. I went into depth about how the GBR3 struck a chord with me. For all you “too long; didn’t read”-ers out there; basically, I got drunk with Kristian Haagen before my Oris Basel appointment and barely registered anything — until I studied the shots afterward. The Great Barrier Reef III, stood out as a fascinating execution of its intended theme.

Many onlookers appreciated the turquoise ombré dial of the GBR3, but I saw it a different way. The off-beat running seconds sub-dial was new for the Aquis. Not only that, but the double-edged seconds hand resembled a surfboard. Both these features truly reflect a laid-back Aussie lifestyle that I covet, yet ties-in with the conservation efforts of the Reef Foundation. It’s that character, and subtle touches that I feel is lacking in the new Calibre 400. The Pro Pilot X, for example, was a new design concept to unveil the Calibre 115 movement. 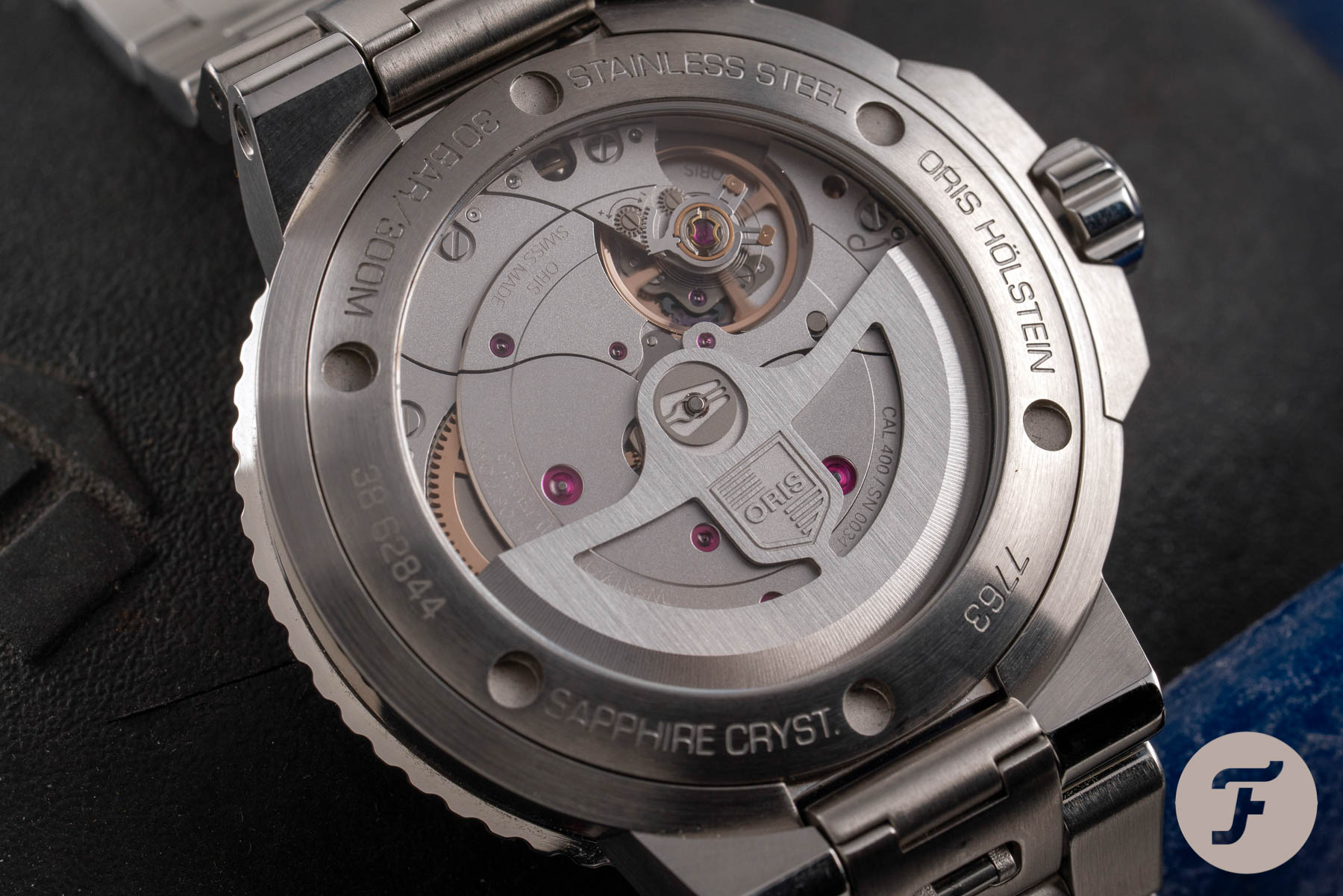 So, what about the movement? A lot has been said about the three headline grabbers. To recap, that is five days of power reserve, anti-magnetic up to 2,250 gauss, and a recommended ten-year service interval. But I want to look past these flashy statements. First up, in my view, is the accuracy. As RJ stated, the watch is not COSC-certified. For me, that does not change my confidence in its performance. But to many, that is the signifier for superior watch regulation they can trust. Rolex, Breitling, and Tudor would not print the chronometric certification on the dial otherwise.

Over five days, the Calibre 400 only gained three seconds.

Yet Oris risks a bit of bragging in keeping the costs under control. And requesting chronometer certification may push the Aquis into the pricing territory of the Tudor Pelagos. Even without independent regulatory checks, I experienced an incredibly low rate of deviation. Over five days, the Calibre 400 only gained three seconds — that is less than a second a day. The only reason I could not test further was due to the need to adjust the time to account for daylight savings. Anti-magnetism is a little harder to try, at least with homemade apparatus. So, I am happy to take Oris’s word on that. 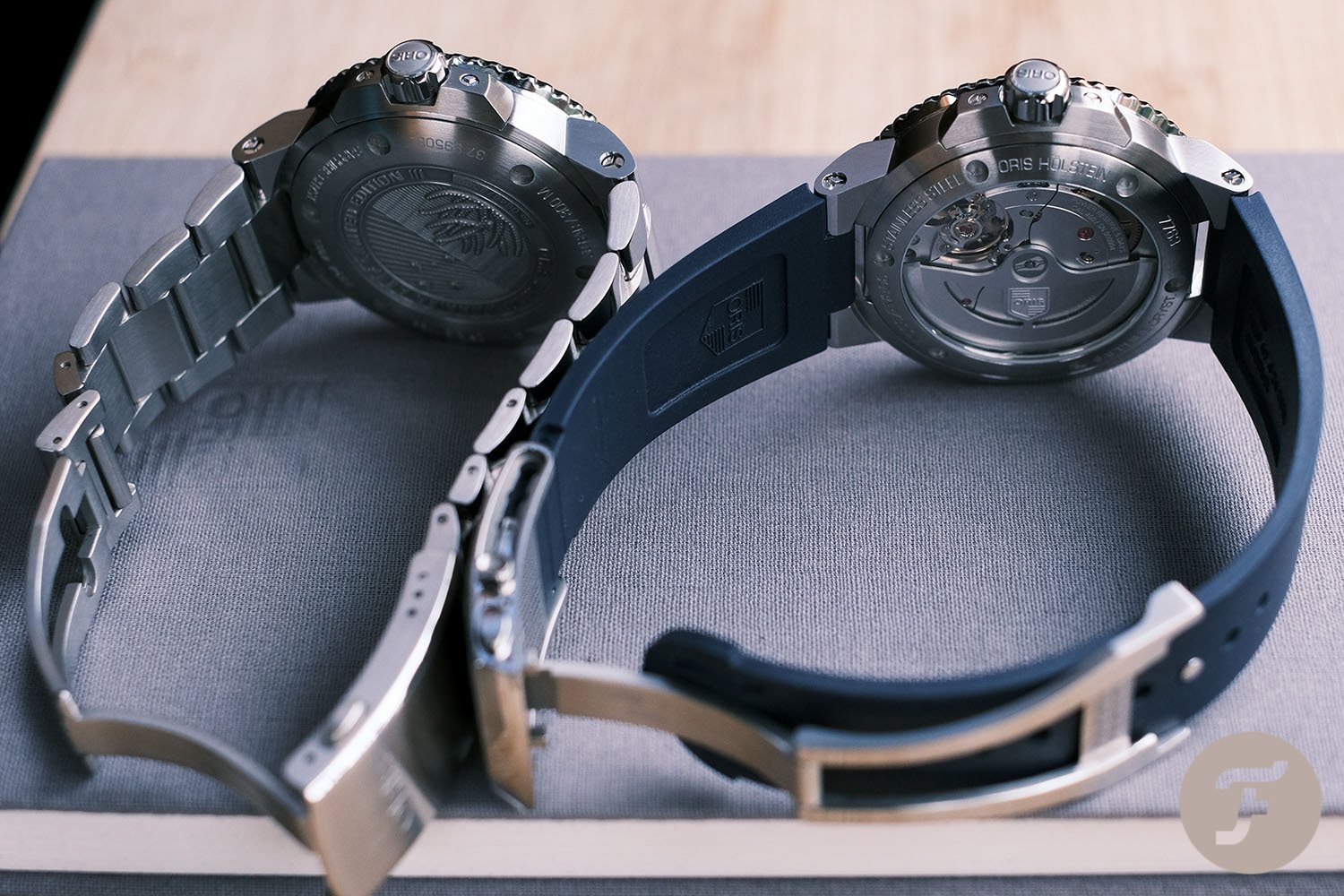 What I do appreciate, however, is the five days power reserve. Of all the upgrades, the double-barrel strength is the one that separates the Calibre 400 from the regular Aquis. I do love my GBR3, but with only 38-hours from the Sellita SW200-1, constantly winding it after rest days does get a bit frustrating sometimes. I rotate through my watch collection in the week, and I am forever finding myself setting my Aquis. Whereas, the rest of my watches have at least 60+ hours to keep them going for longer. 120-hours in the Calibre 400 is a welcome boost that is the most tangible benefit to the new movement.

The twin barrels with corresponding jewels does resemble the Oris bear mascot.

The finishing of the movement is very minimal, and I do miss the iconic red Oris rotor from the sapphire case-back view. But placing the twin barrels with the corresponding jewels and correctly positioning the rotor does resemble the Oris bear mascot. Rolf Studer reliably informs me that this was purely coincidental and not intentional. Immediately it was noticeable how different the Calibre 400 winds and sets. It has a satisfying click and ratchet that’s more precise than the “sandy” feeling regular Aquis when winding.

The new movement was christened the 400 as it was a previously unused calibre reference from the Oris archives. As a number divisible by a hundred, I can imagine, this calibre will form the base of movements to come, whether that be GMT or even chronograph complications. For now, this movement fits in the 43.5mm Aquis case. But could also slot into the 39.5mm Aquis case — maybe even the Divers Sixty-Five one day. I can only assume that this will force out the Sellita movement in Oris dive watches, at least for the larger cases. 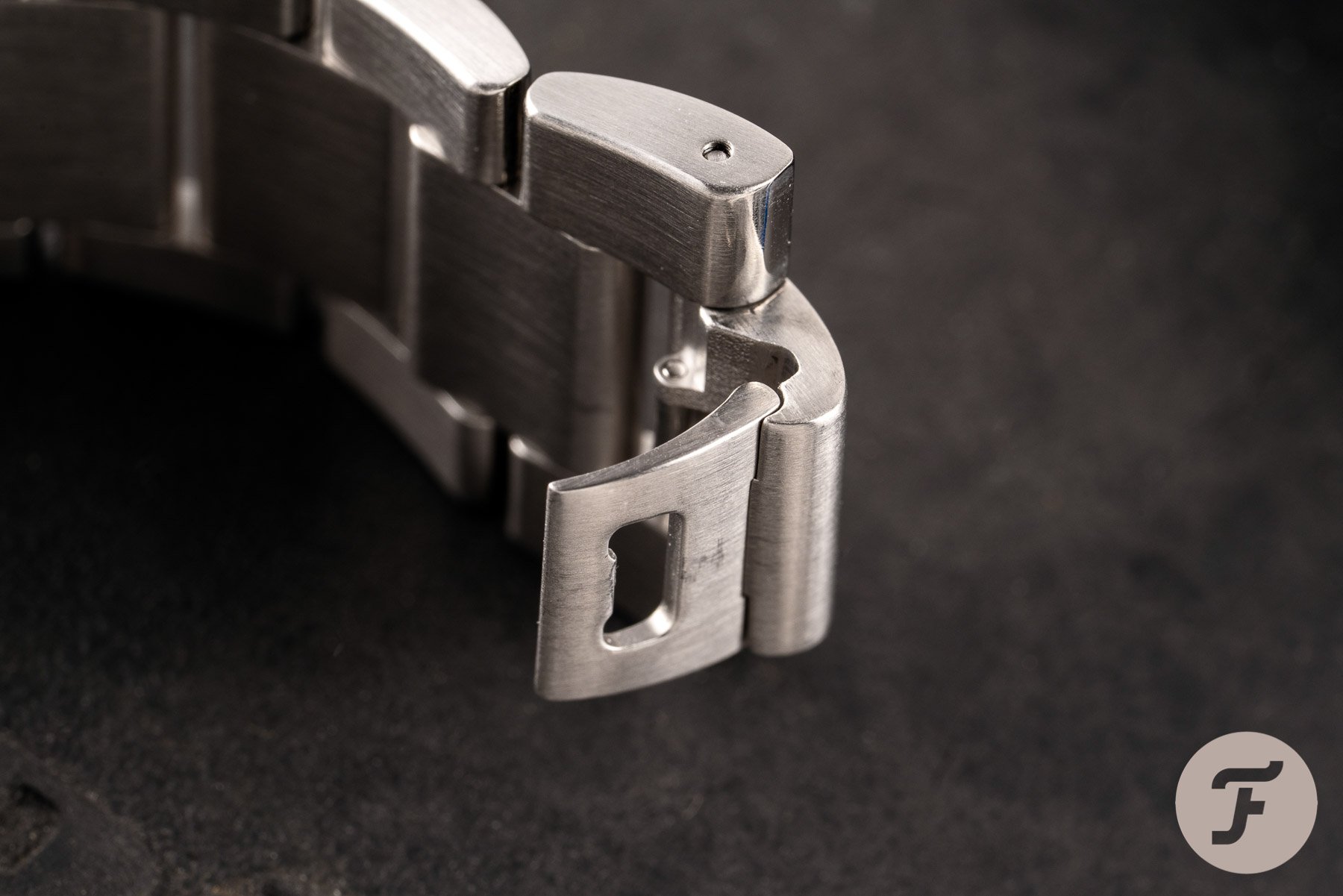 The movement is not the only upgrade. On the underside of the bracelet is a quick-release flap that allows the bracelet to be swapped out for the rubber strap. That does not mean the traditional tri-wing locking screw and collar system has been discarded. You can still swap the integrated bracelet with older Aquis rubber and leather straps. I want to point out that the case is slightly more scalloped to accommodate the quick-release system. Therefore, fitting older straps with the quick-release shows a gap between case and strap. Previously, the two sat flush. I did not have a problem with wearability, but it did leave a noticeable space, that may annoy those that have been collecting various straps for the Aquis. 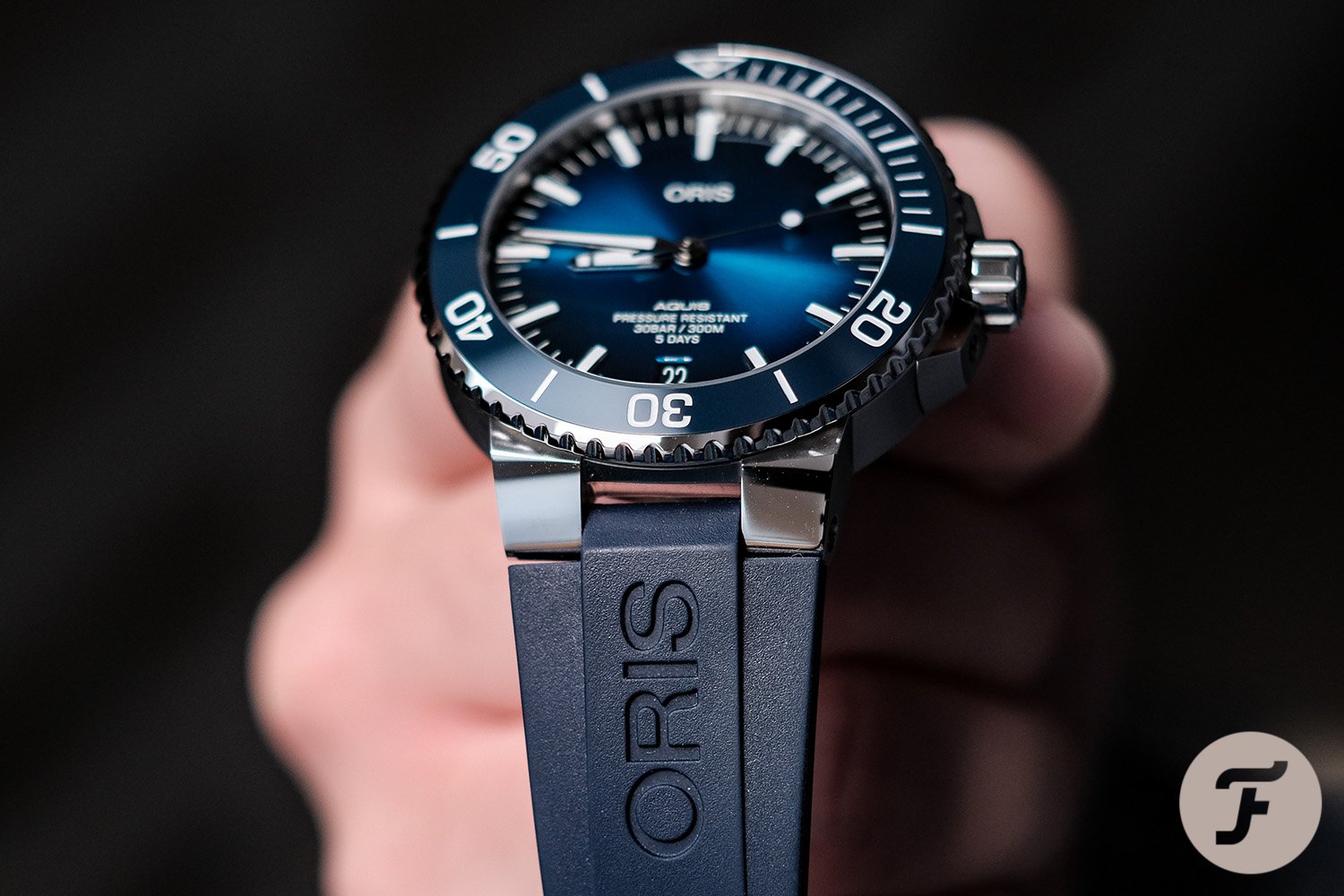 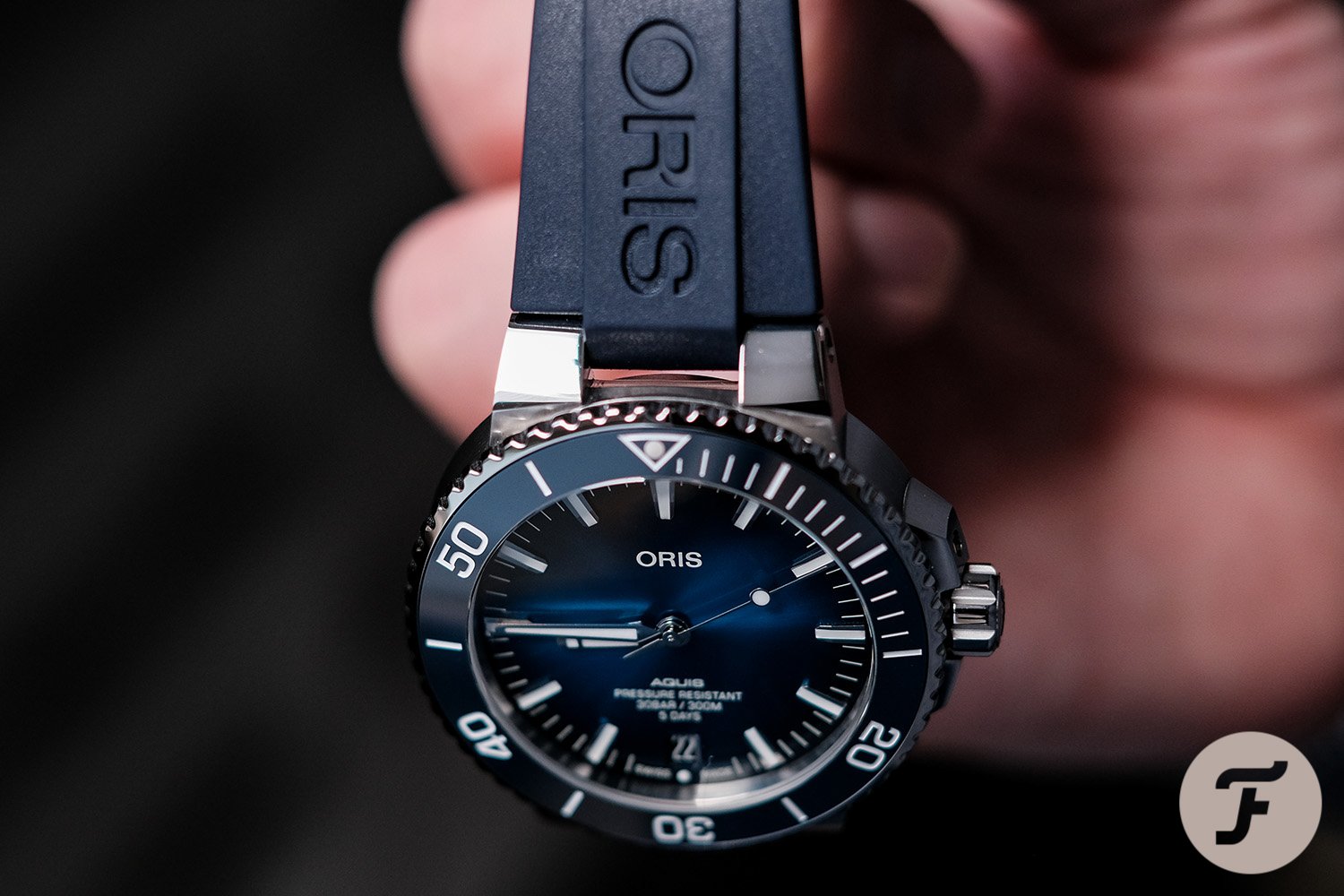 With a price tag of CHF 3,200, the Calibre 400 is pushing up another bracket. However, I feel the sub-2,000 Sellita-powered Aquis was always an unbelievable bargain. That did come with a proviso. As an independent manufacturer, Oris has to operate reasonably lean. That means official service centers can be relatively limited. There has often been a complaint that a routine service can take longer than expected, leaving the owner without their watch. Rather than exponentially increase global service locations, Oris is keen to ensure the watches see a service center less frequently. 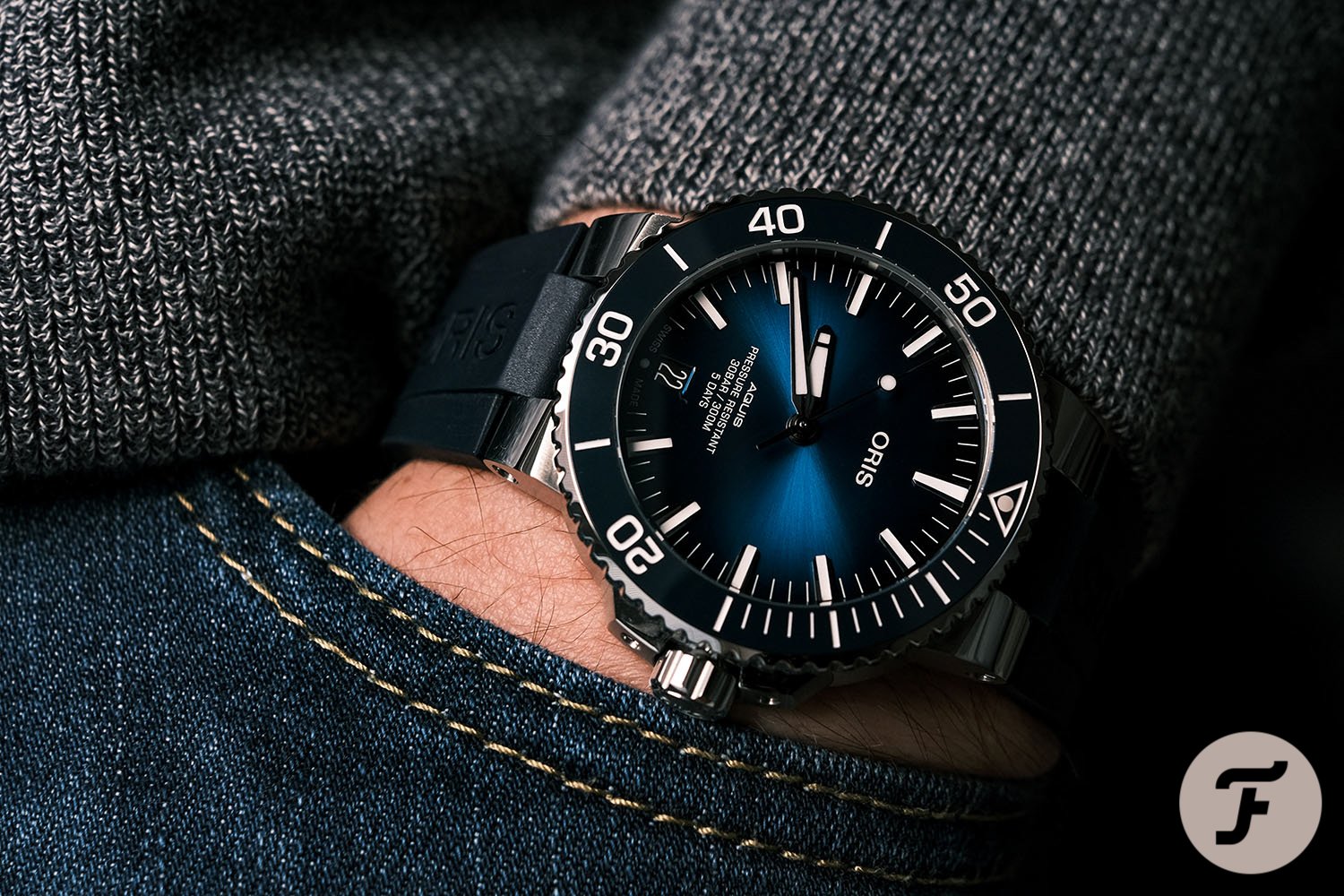 So, would I trade up my Aquis Great Barrier Reef III for the Calibre 400? No. Sorry, I love that dial too much. But would I like to have 5-days power reserve, a higher tolerance for magnetism, and more prolonged continuous usage? Yes, to all three. Consequently, I am keen to see the iterations for the next generation of the Aquis and the expanding range. Oris is moving in the right direction with the new Calibre 400 movement and it’s only just the beginning. Check out more on the Oris website here.

Hot Topics
Introducing: The Omega Speedmaster Super Racing With Spirate System
165 comments
Design Vs. Specs — Which Is More Important To You When Buying A Watch?
86 comments
My Predictions For New Omega Speedmasters In 2023
54 comments
The Time To Buy Is Now: How The Current Economic Climate Influences Watch Buying And How You Should React
51 comments
A Regret-Free Guide To Buying Your First Luxury Watch — Part Three: Higher-End Options From Omega, Rolex, Grand Seiko, And More
48 comments
Popular
An Overview Of All Omega Speedmaster Apollo XI Models
Robert-Jan Broer
17
(From The Archives) Shut Up & Read The Truth About Cartier Watches
George Cramer
21
Speedy Tuesday – Omega Speedmaster Professional 145.022 Buyer’s Guide Part 1
Robert-Jan Broer
14