Hands-On With The Tudor Pelagos 25600TB

For a few years in a row now, Tudor is one of those brands that’s getting a lot of love from watch enthusiasts during the annual Baselworld exhibition. In our article of last week, where we featured our team’s favorite watches (25 in total) and 5 let-down watches, Tudor also got a number of mentions. Not only did Tudor introduce the new North Flag watch (we talked about it here), but they also introduced a revised Pelagos collection.

Not long after Tudor introduced the Pelagos 25500TN, I wrote a review about it here. I was quite impressed as, as it felt like it was a modern interpretation of the – then discontinued – Rolex Sea-Dweller 4000ft/1220m. This year, Tudor decided to put their in-house developed movement (caliber MT5612) in a new line-up of Pelagos watches, reference 25600TN (black version) and 25600TB (blue version). In short, this 70 hour power reserve movement uses a silicon hairspring and has been chronometer certified (COSC). This industrial looking – because straight-forward finished – movement is replacing the ETA 2824-2 movement in the 25500TN model. According to Tudor, the replacement process of the 25500TN with the new Pelagos 25600TN and 25600 TB references is already in progress and that it won’t take long before all Tudor Pelagos models available in shops and boutiques will be the new black and blue versions.

Besides the technical changes to the Tudor Pelagos 25600TB and 25600TN, there are also a number of changes that have been made to the design of the watch. A change that is much discussed among watch enthusiasts is the 4-line print on the dial of the new Tudor Pelagos 25600TB and TN models. Where the previous model only indicated the ‘Self-Winding Rotor’ and depth indication, the new Tudor Pelagos 25600TB and TN watches now also mention the model name on the dial as well as the fact that the movement has been chronometer certified by COSC. This change is much discussed, as some purists prefer to have as little text on the dial as possible and others applaud Tudor for indicating chronometer certification and a mention of the model name. To be honest I actually have no preference, perhaps the printing could have been done with a bit smaller font size, but it certainly is not something that make me stop from buying the Tudor Pelagos 25600TB or TN. 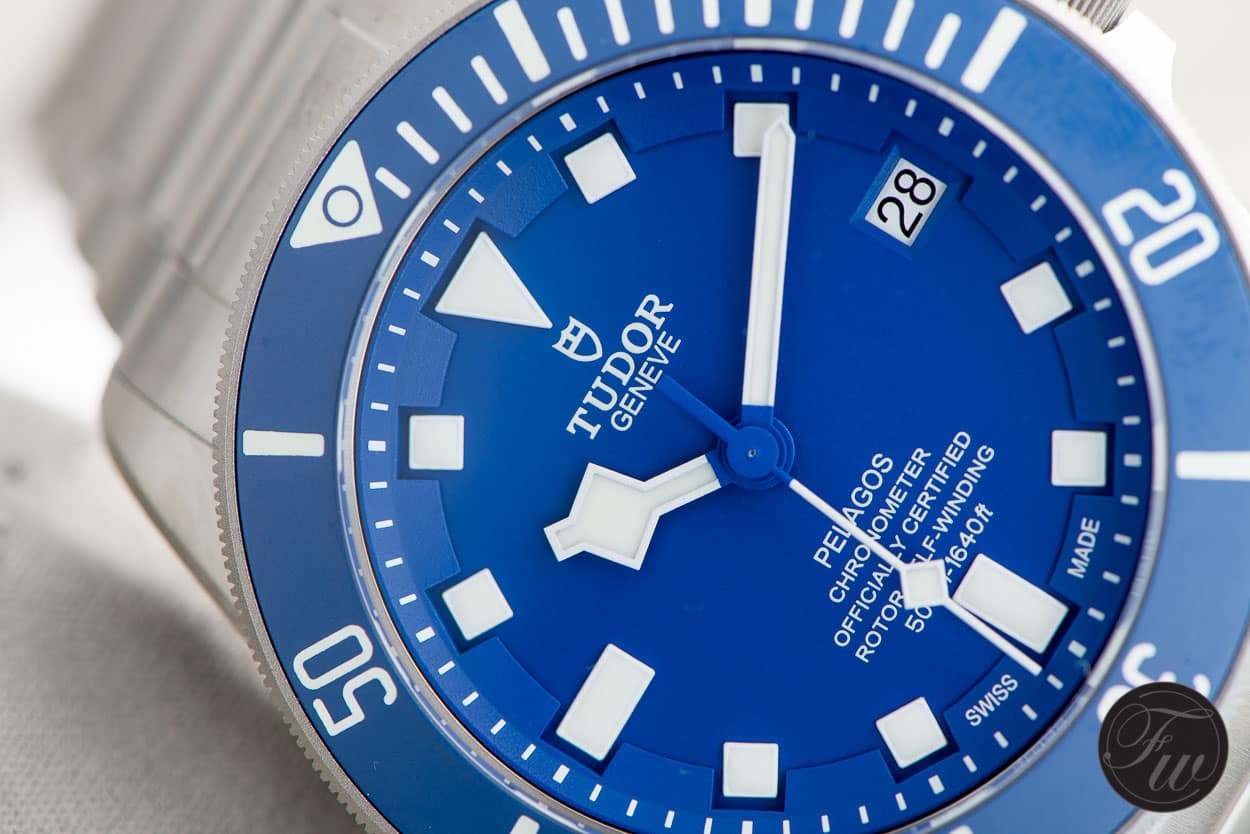 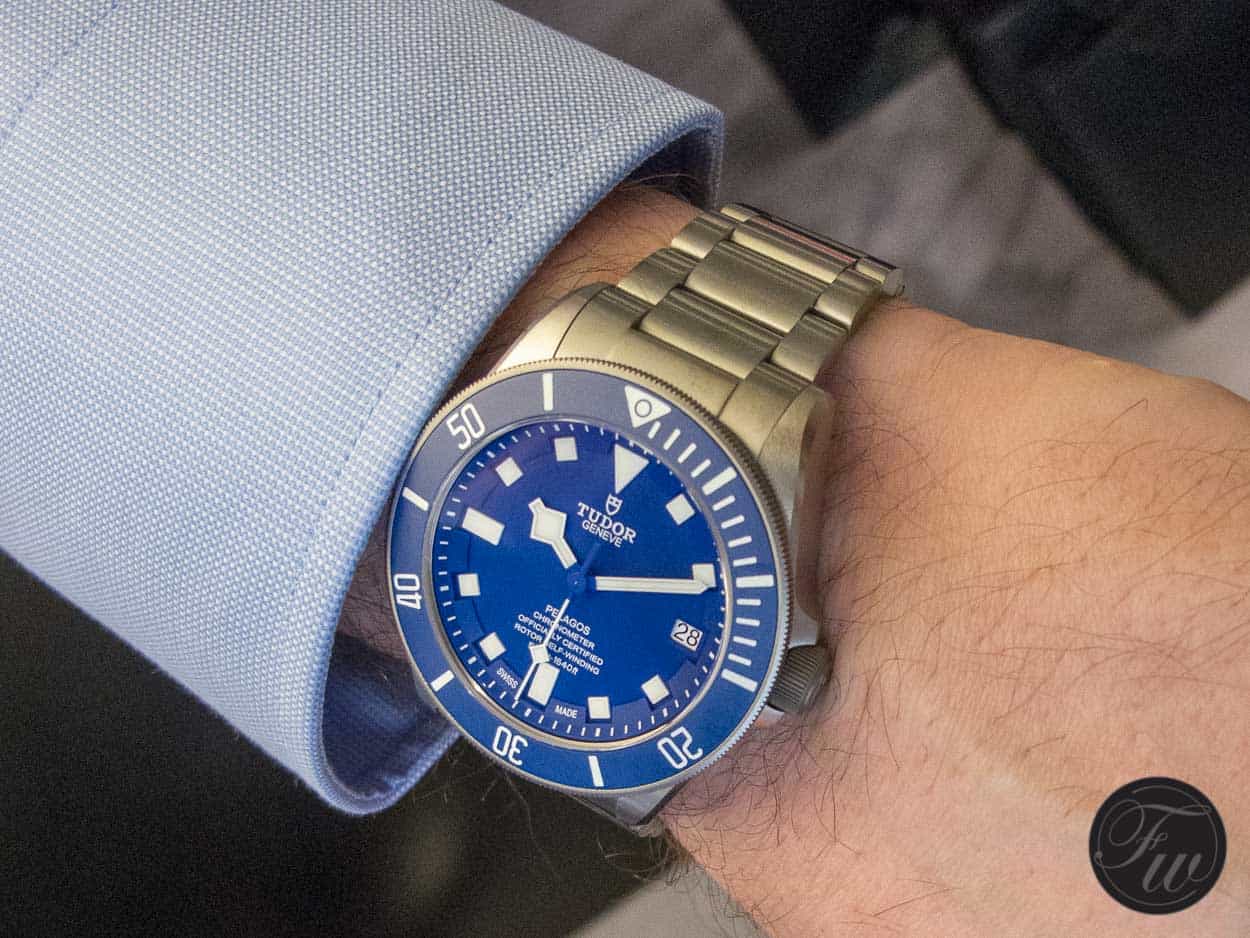 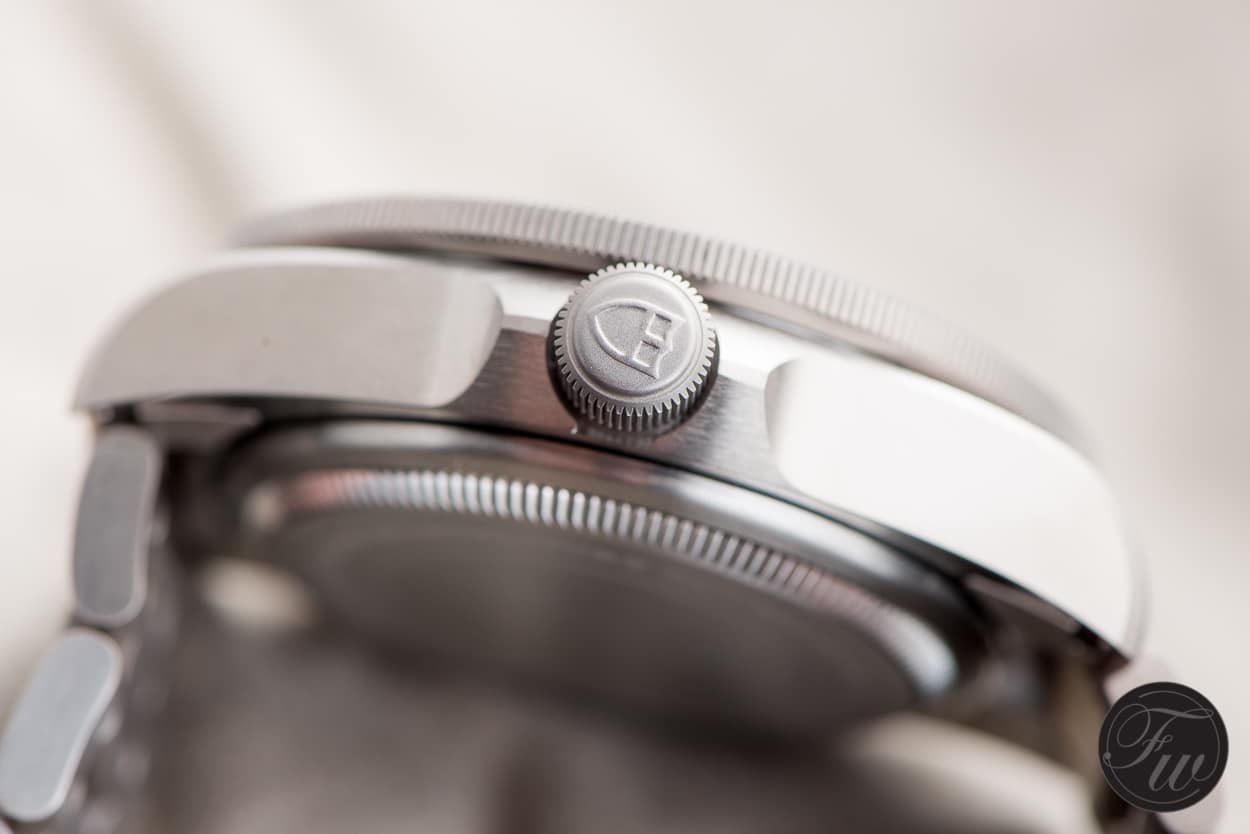 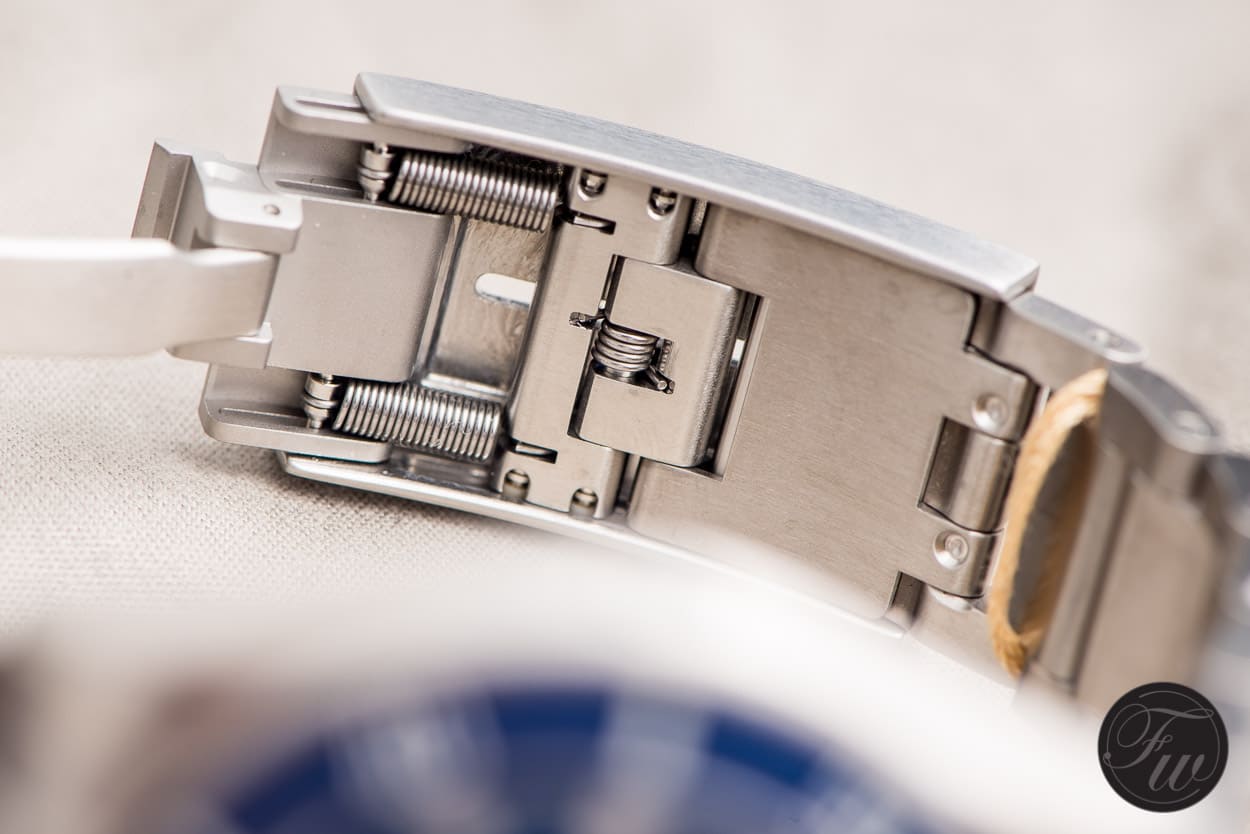 The new Tudor Pelagos 25600TB and TN gives people a bit of choice of colors as well. The classic black looks beautiful and gives this 42mm titanium watch a real tool-watch look, but the blue version really makes the watch pop on the wrist. Although I’ve seen a number of new watches using blue, it isn’t something really new of course. Some blue dialed (and bezeled) watches have turned into classics in the past and I don’t see why this Tudor Pelagos 25600TB can’t do the same in the future. 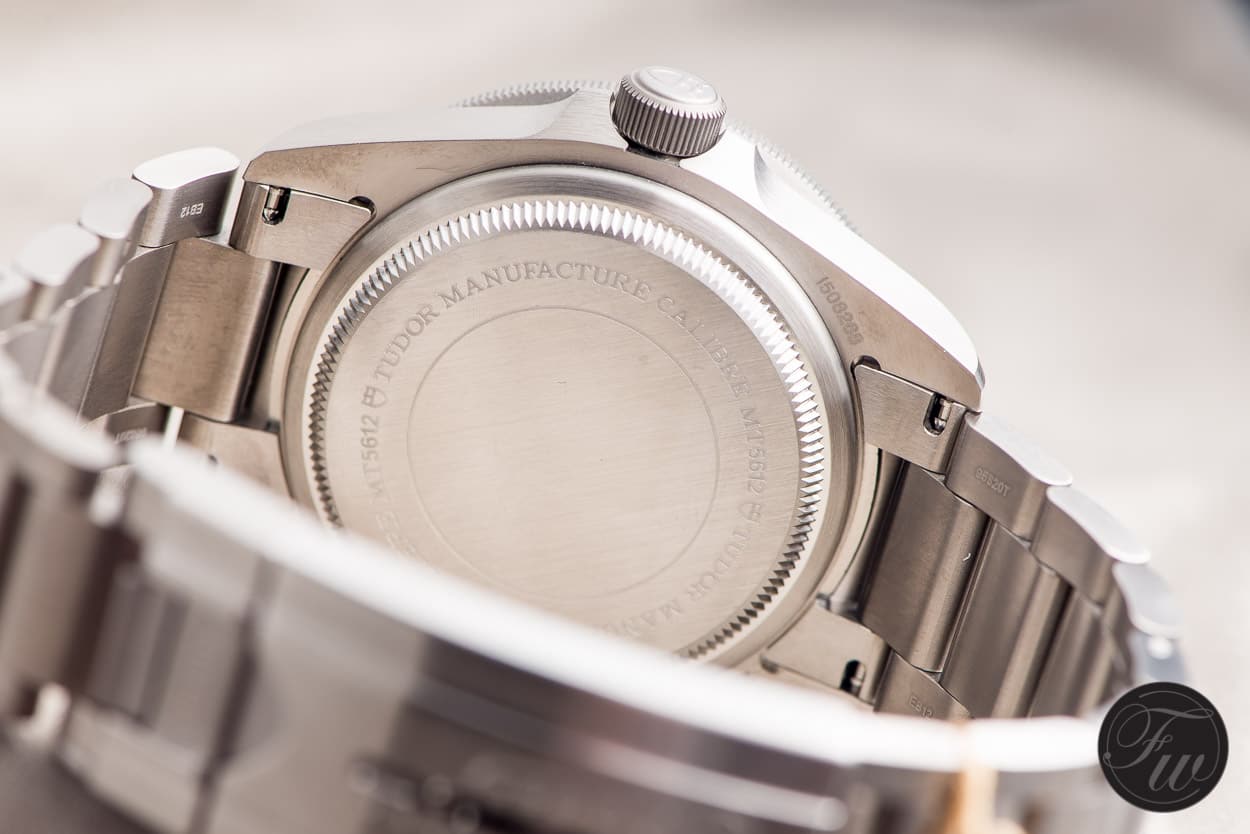 Tudor engraved the case back of the new Pelagos with all relevant information, such as the new in-house manufactured caliber number (MT5612).

The new Tudor Pelagos 25600TB and TN has a list price of CHF4.200,- Swiss Francs and that makes it a very interesting timepiece for those who want a solid sports watch with an in-house movement. The Pelagos is a modern sports watch and has all features such a watch needs. It will be also very interesting to see how the demand for the previous Pelagos will develop and of course what will happen to the market value of those. Will it become a cheaper alternative for this CHF4200 Swiss Francs model or will it become a collectors item with dito price tag?

Michael Stockton
14
Read next latest →
Former Feyenoord Footballer Michiel Kramer Sells His Rolex For His Own Safety
Robert-Jan Broer
3
The Best Watch Brands In The World: Which Companies Strike The Balance Between Product And Presentation
Rob Nudds
9
Have Watch Enthusiasts Lost Their Sense Of Adventure? Or Is The Hype Surrounding Brands Like Rolex and Patek Philippe Giving Us Tunnel Vision?
Lex Stolk
5
8 Comments