A Patek Philippe Nautilus Tiffany & Co. Versus An Ingenieux Liaison HodieNFT At Auction

When collectors say “yes!” and “no!”
Lex Stolk
comments 18
Share

The auction house Christie’s was very pleased to announce that it beat the competition last weekend. It was, of course, a weekend of big watch auctions organized by all the major auction houses. Christie’s organized two of them. The house’s Legendary and Unique Watches auction realized CHF 31,877,418, and the Rare Watches auction realized CHF 23,669,670. The over CHF 55 million that these two auctions brought in came thanks, in part, to selling 17 lots above CHF 1 million and the help of 40% new bidders. What also helped was the Patek Philippe Nautilus Tiffany & Co. that reached CHF 3,174,000 — quite a bit for a steel 5711 with a light blue dial, right? Collectors were all over it. They were also all over the Ingenieux Liaison HodieNFT that came under the hammer at Antiquorum’s Important Modern & Vintage Timepiece auction… But in a very different way. And for good reason.

Call it an homage. Call it a collision of styles. You call it whatever you like, but watch fans that lay eyes on the Ingenieux Liaison HodieNFT will call BS. Ingenieux is the brand of Italian entrepreneur Marco Mavilla. He’s the man that founded ToyWatch in 2005, producing plastic watches that looked like familiar luxury timepieces that made their way to hundreds of stores worldwide. As of 2007, fellow Italian Andrea Tamburini was responsible for the design of the various ToyWatches inspired by the world and colors of fashion. And Tamburini is also responsible for smashing an Audemars Piguet Royal Oak together with a Patek Philippe Nautilus. The result got the name Genius Genta Legacy. The top half is a Nautilus, the bottom half a Royal Oak. Now the name Genius Genta is gone from the dial, but the travesty that is the watch remains. 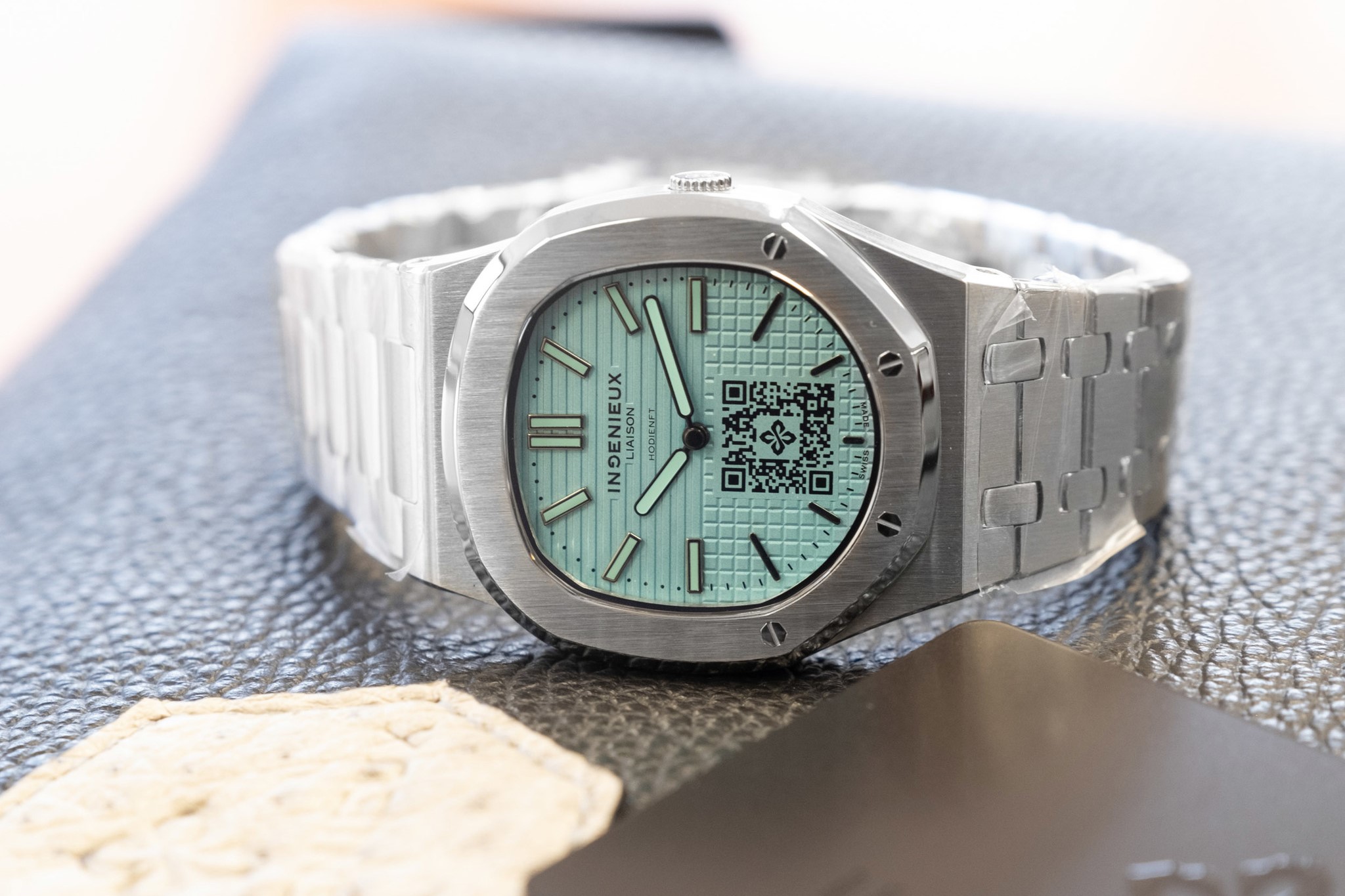 A Patek Philippe Nautilus Tiffany & Co. but only half of it, sort of…

Genius Genta became Ingenieux, and the Legacy was renamed the Liaison. According to the brand’s website, it’s not just merging forms, it’s also colliding talents. That’s weird because the Nautilus and the Royal Oak were designed by just one talent, Gerald Genta. The merging of two iconic shapes was done in such a way that it looks like an accidental collision.

But according to the brand, it was sophisticated technology and complications that bring the rarest timepieces of all time together. That’s also weird because the Royal Oak and the Nautilus are still in production. They’re desirable, yes, but not rare, per se. Anyway, just when you thought it couldn’t get crazier (and uglier), the Ingenieux Liaison HodieNFT was presented to the world. The watch is half a Patek Philippe Nautilus Tiffany & Co. with a QR code on the Royal Oak half of the dial.

This steel watch, with its Pantone 1837 C Turquoise dial showing misaligned indexes at 12 o’clock, will not only be an abomination in the real world. No, my friends. Because it’s also an NFT, it will also terrorize the digital space. The first watch in the Liaison series, number 0 of 99 in total, was sold last weekend at the Antiquorum Geneva auction on November 6th, 2022.

Antiquorum holds a special place in the world of watches. The auction house, established in 1974 in Geneva by Osvaldo Patrizzi, organized many a memorable auction. The Art of Patek Philippe auction in 1989 helped establish Patek Philippe’s reputation as the undisputed king of high horology and viable investment. The fact that Antiquorum put the Ingenieux Liaison HodieNFT up for auction as lot 400 caused a lot of reactions. The watch community immediately responded in the comments when the watch appeared on different social media accounts. Collectors collectively said “no!”

Still, no matter the criticism and outrage, Antiquorum auctioned the Ingenieux Liaison HodieNFT during the sale on Sunday, November 6th. The watch sold for a staggering CHF 35,000. Yes, the buyer also got the NFT, a unique token represented by an animated digital artwork created on the Bitcoin Liquid sidechain, but still. It could well have been a marketing investment by the brand itself. I mean, on Monday, November 7th, the rest of the 99 pieces of the Sellita SW200-equipped and NFT-certified Ingenieux Liaison HodieNFT became available on Hodienft.com for a price of €7,000. For €7K, you’re invited to pick up the Liaison HodieNFT at the store in Milan, where a VIP experience awaits. If Ingenieux manages to sell all Liaison HodieNFT watches for €7,000, that amounts to €693,000 in sales. That’s CHF 35,000 of well-spent marketing money! 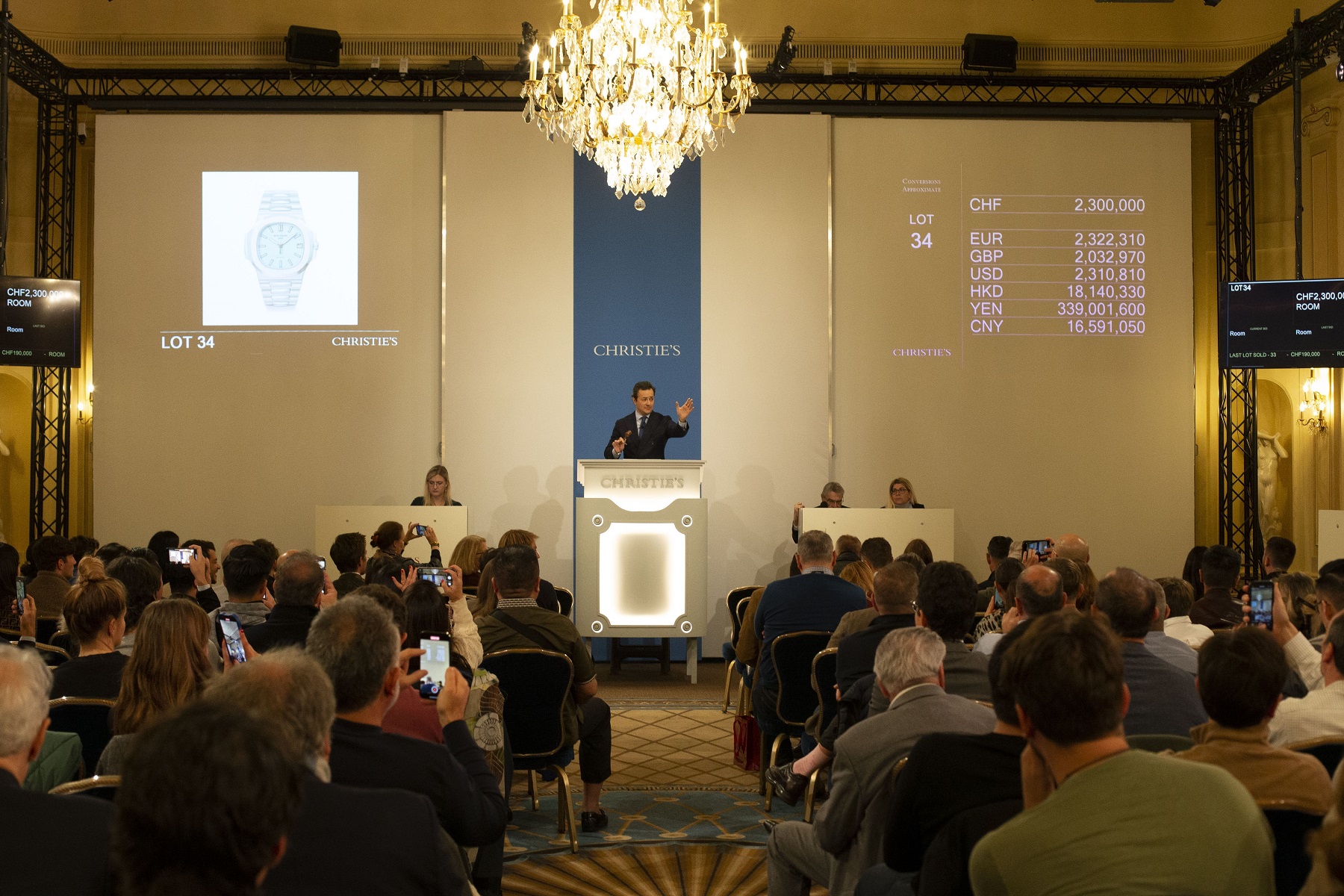 It did help Christie’s to become the winner of the unofficial Geneva Autumn 2022 watch-auction competition with CHF 55,548,348 / US$55,540,232 / €56,302,789 / HK$433,841,034 in sales. And the buyer of lot 34 must have been over the moon because of the outlet price of the watch. Please keep in mind that the first Nautilus with the Tiffany & Co. signature, auctioned off by Phillips in Association with Bacs & Russo in New York in December of last year, reached US$6.5 million. Last weekend’s lucky buyer got a multimillion-dollar discount!

Please tell me in the comments how you feel after reading and seeing all of the above. You can also find and follow me at Lex Stolk • Instagram.