Following my preview of the Antiquorum & Phillips watch auctions, my brother and I took a look at Christie’s upcoming auction catalog, but sadly did not have the pleasure of viewing the watches in person yet as they are currently traveling. The Christie’s team have focused more on vintage versus modern in recent auctions following a continued global trend from collectors. This trend does not seem to be slowing, but rather deepening as a slump in modern watches is evident.

Also, on the occasion of the 40th anniversary of the Patek Philippe Nautilus, Christie’s has organized 40 Nautilus watches to be auctioned in 4 different catalogs. So at the end of each of the four catalogs (Dubai, Geneva, Hong Kong and New York), a section of 10 rare or top condition Nautilus watches are placed together for a total of 40. This is a pretty understated way of having a thematic sale. I would imagine that it would have been more impactful to have all 40 pieces auctioned in Geneva or New York. The Dubai results for the 10 Nautilus was good by regular auction standards, but not the dazzling results of a thematic auction either.

The Christie’s watch auction, which takes place on Monday November 14th in Geneva, is comprised of 326 lots in the catalog, which is about 50 more pieces than in May. Out of these 300+ lots, there are 84 Rolexes (70 in May), 114 Patek Philippe (47 in May) and 25 Omegas (same as May) making up almost 70% of the catalog. So, there is a little less variety than last time and granted the 10 Nautilus have added to the Patek count, there are more than double the amount of Pateks than in the previous sale. Just some interesting numbers that could be very indicative of market situation based on the results. We will be watching closely and are always excited and curious to see what happens at auction.

Here are some of the interesting wristwatches we are particularly fond of and decided to share:
LOT #33 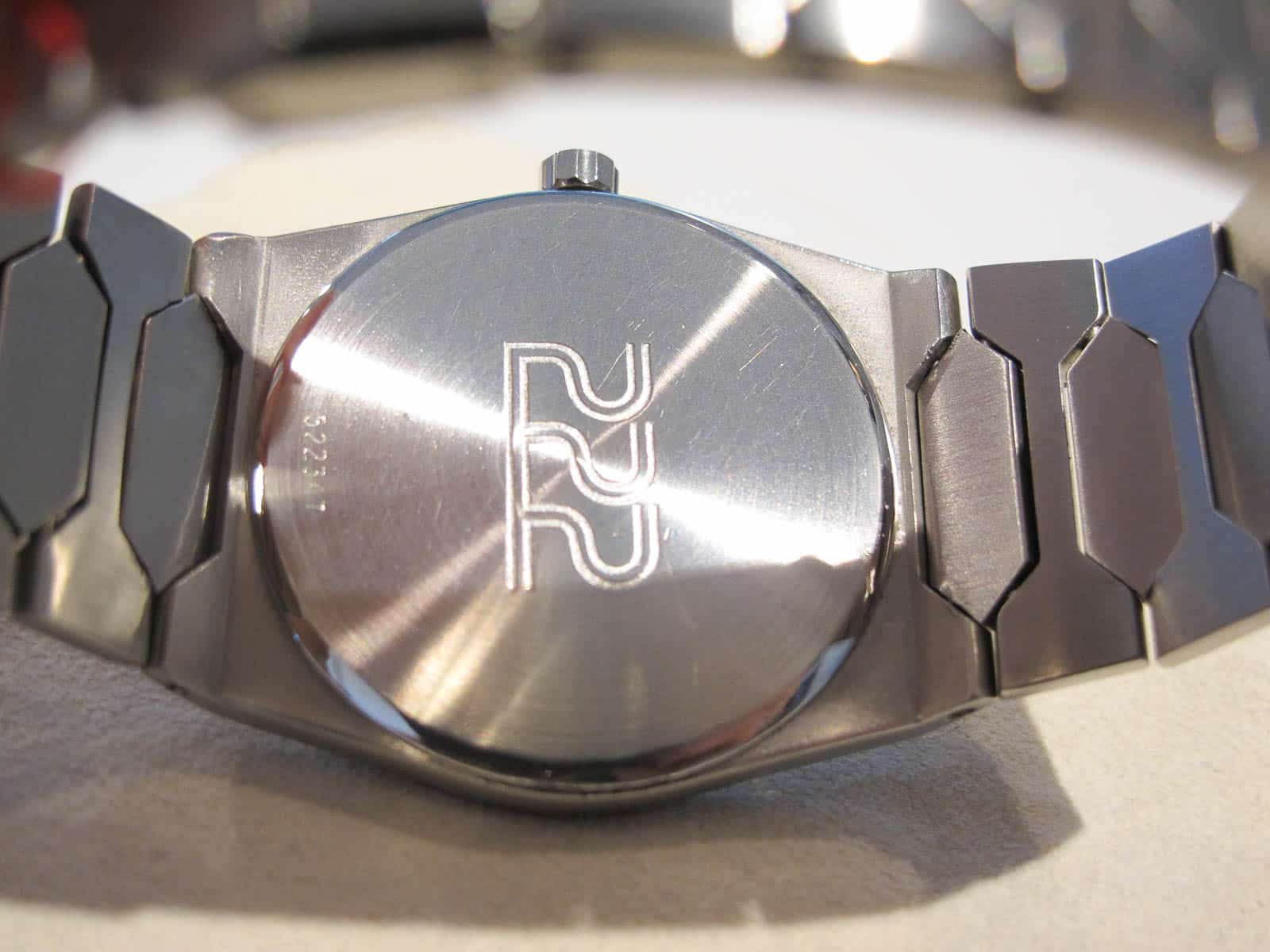 The iconic sports or casual luxury watch of the 70’s share similar attributes and are more similar than most people realize. For example, Gerald Genta designed the Audemars Piguet Royal Oak (1972), Patek Philippe Nautilus (1976) and the IWC Ingenieur Jumbo (1976). However, the Vacheron 222 (1977) was designed by Jorg Hysek. It was a celebration of the 222 years of Vacheron Constantin and like the others was a stainless steel time-only bracelet watch. The 222 had the same Jaeger LeCoultre ultra-thin caliber base as the Royal Oak and the Nautilus. Each company named the caliber differently, but essentially used the same ebauche. The IWC differed from the others as it had its own in-house Pellaton movement. The two most famous of the four are the Royal Oak and Nautilus, but my brother and I are a bit partial to the Vacheron 222. It is the lesser known and cooler one to own. 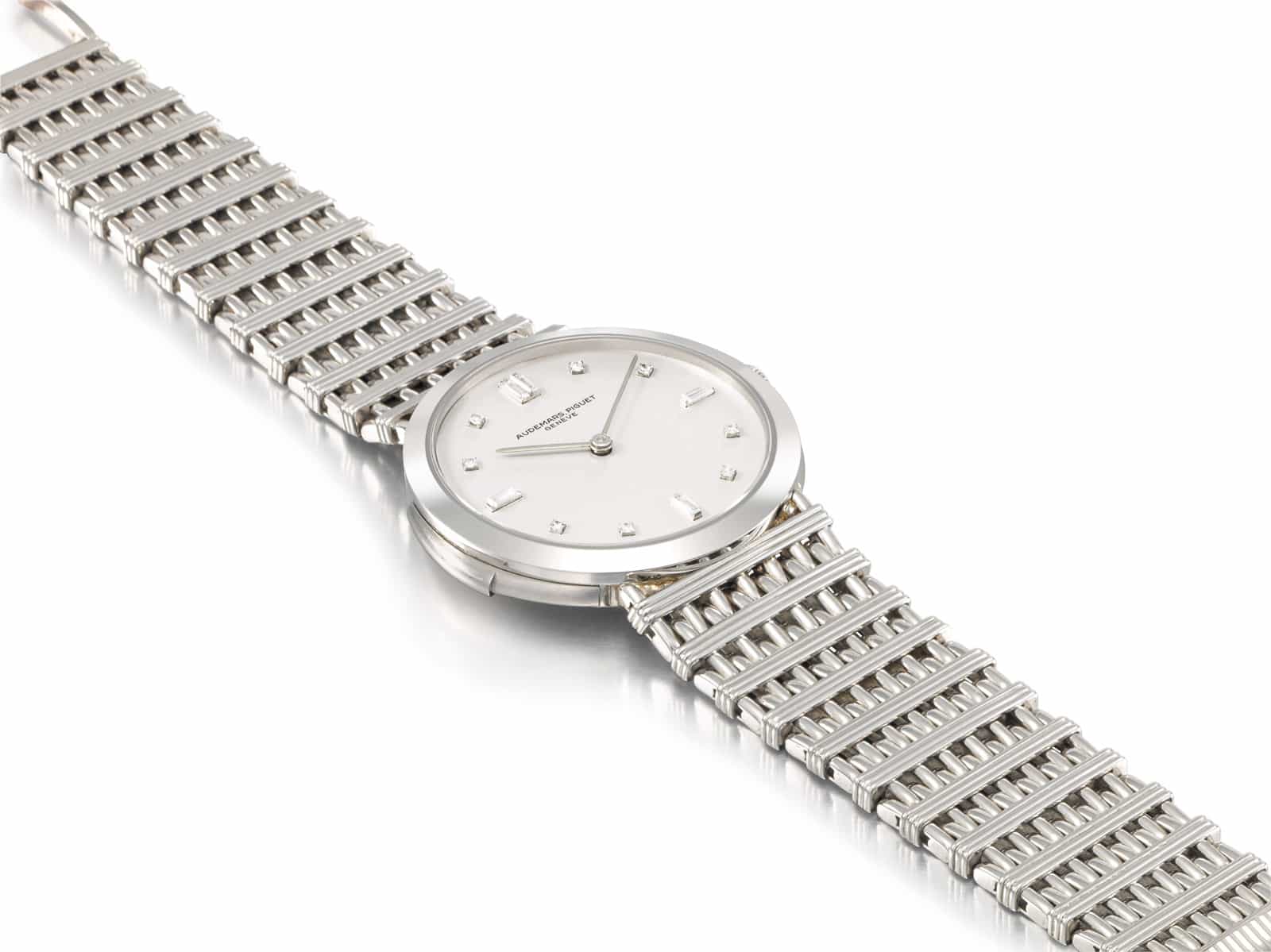 After receiving our copy of “Audemars Piguet Miniature Chiming Watches 1882-2002” we coincidentally noticed that one of the watches in the book was in this Chrisitie’s sale. We learned some pretty fascinating things. How rare is a vintage minute repeater wristwatch from Audemars Piguet? In 100 years from 1892 to 1992, only 35 pieces were made. That alone blew us away, we both guess way way more. The last one was delivered in 1960 and was actually the present example. The case is the original one, one request of of one of the previous owners, the bezel has been changed. From a brilliant-cut diamond set bezel to the current sloped one. Also the bracelet changed in a later stage. The before and after pictures can be found in the book. 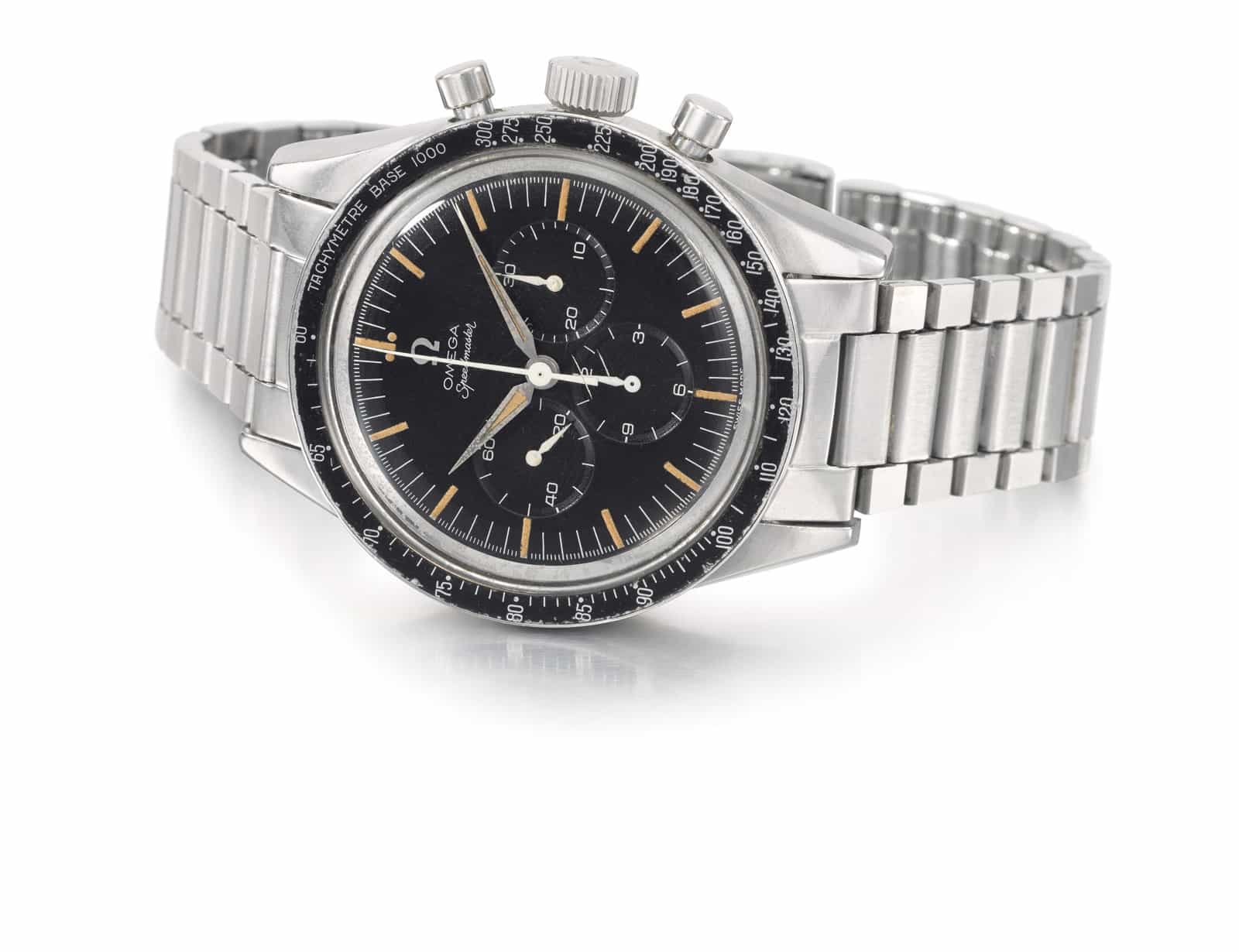 The majority of Speedmaster aficionados associate the 2915 reference with the broad arrow hands and the steel bezel typically found on the -1 and -2 references. However, the black sheep of the 2915, the 2915-3, is an equally important one in regards to the evolution of the Speedmaster. The Speedmaster, launched in 1957, was the first chronograph wristwatch with a tachymeter on the outside as part of the case versus on the dial. This design was intended for automobile racers to measure their speed as the name of the model indicates. The first steel tachymeter bezel was not easy to read. Omega therefore opted to modify this design flaw on the 2915-3 with the first black tachymeter bezel in 1959. As this black tachymeter bezel is still part of the design today (with some evolutions of course), it is considered a big turning point in the design of Speedmasters. They also did away with the broad arrow hands in favor of alpha hands at the same time.

This rare and less known 2915 is the forefather of black tachymeter bezels we commonly see today. The present example is quiet stunning and along with other 2915 is very rare.

We also picked two of our favorite watches from the ten in the Nautilus section at the end: 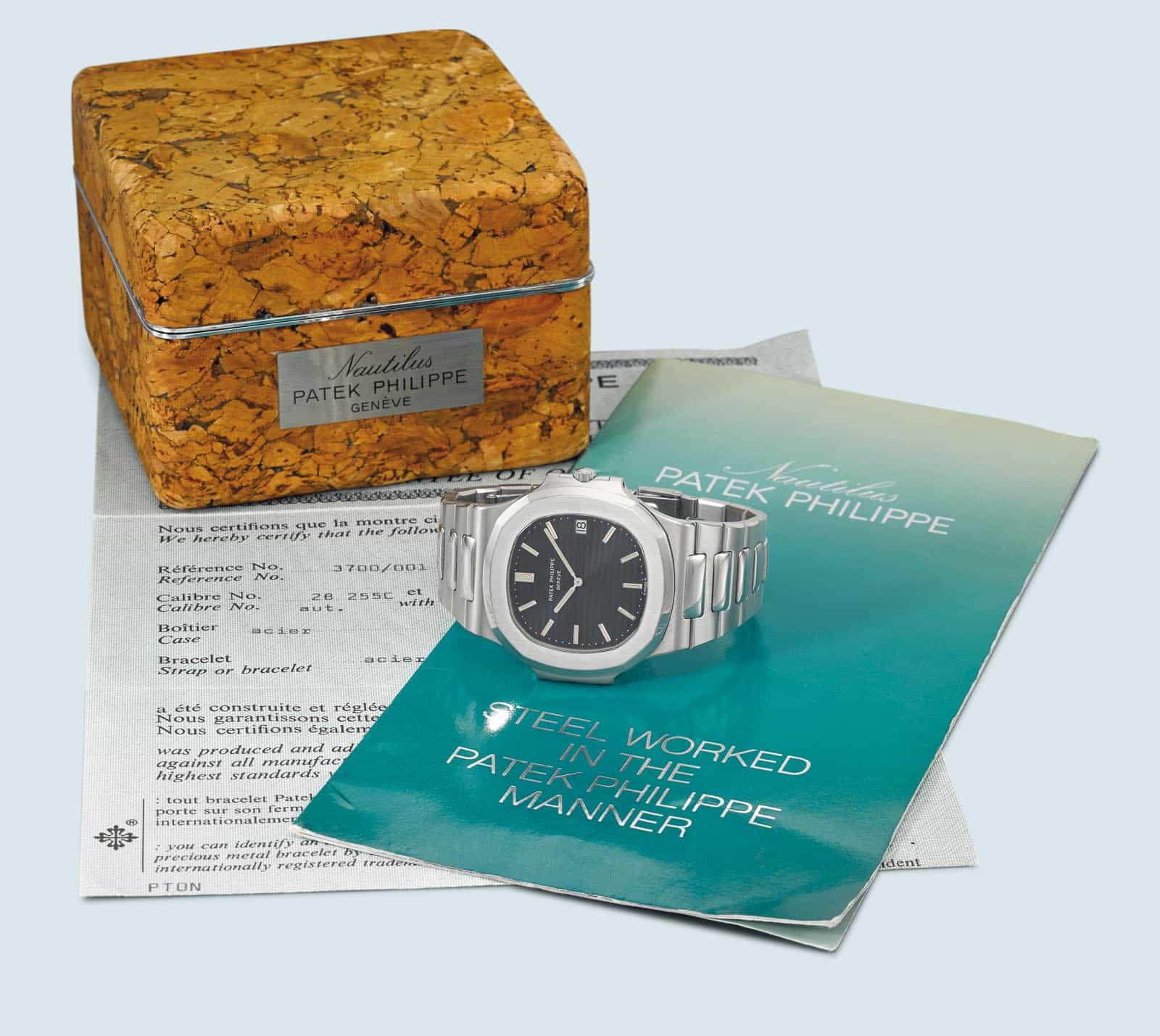 As part of the 40th anniversary Nautilus sale, the must-have model was, of course, the original stainless steel Jumbo and this excellent condition example with its box and original warranty as well as a Nautilus pamphlet make this a wonderful collector piece. The true sign of a good design is when it remains the same for forty years and people are still waiting in line to get one and paying a premium to get one. The official waiting time for a Nautilus steel Jumbo 5711 at the Patek Philippe boutique here in Geneva is three years. Many opt to buy them in the secondary market at a premium of 10-15% over list. It is no surprise that getting your hands on an original vintage one in such stunning condition is far more difficult. 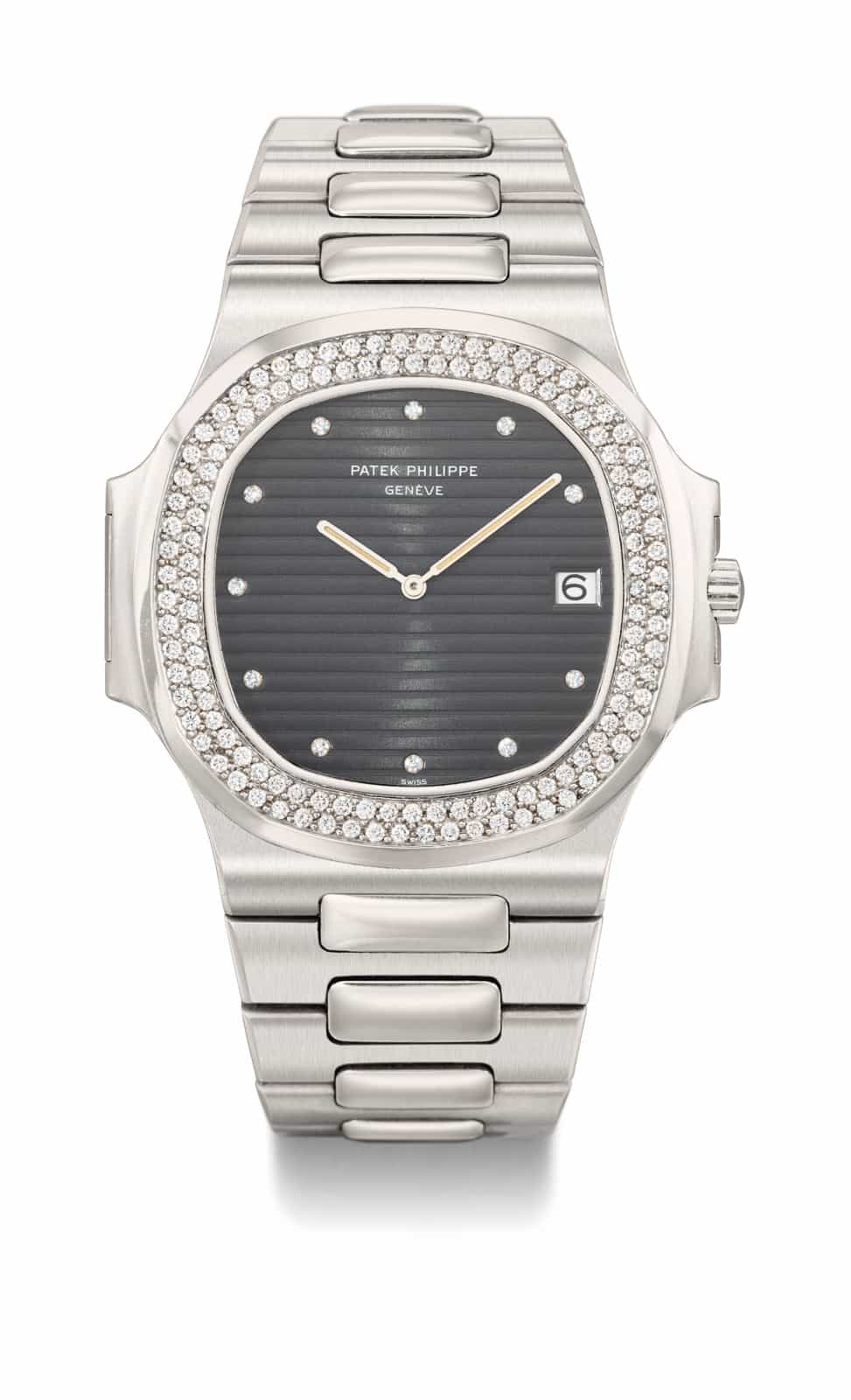 In terms of rare Nautilus watches, the platinum Nautilus is the unicorn. The only one ever to appear at auction in 2013 (case number 552,214), was sold by Christie’s for CHF 783,750 and had a diamond index dial. There were an estimated 4 platinum cases made for the 3700 reference and this one (case number 552,218) is only the second to appear. It is likely it was the only one to have a diamond set bezel making it a possible unique piece. The rarest of the rare, this watch is set to have an impressive result. Logically, it will surpass the previous result. It will be an exciting lot to watch auctioned off and we will make sure to include the result in our auction wrap-up article after the auctions.