Hands-On With The Raketa Space Launcher — Now With Added Space!

Space — the final frontier. Here at Fratello, we love watches (obviously), and we love space. The two are connected at various points in history, and a love of one invariably leads to at least an interest in the other at some point. So, what’s cooler than combining the two interests? Watches that went into space! When I say that, I mean literally went into space. What on Earth am I on about? Well, let’s take a closer look at the Raketa Space Launcher and find out.

Let me start by saying that ROSCOMOS did not commission this watch. Russia does not use its homemade watches to accompany its astronauts into space. So what do I mean when I say these watches went to space? Well, what if I told you that some of the materials Raketa used to make the watches actually went into space? Do I have your attention? I thought so. 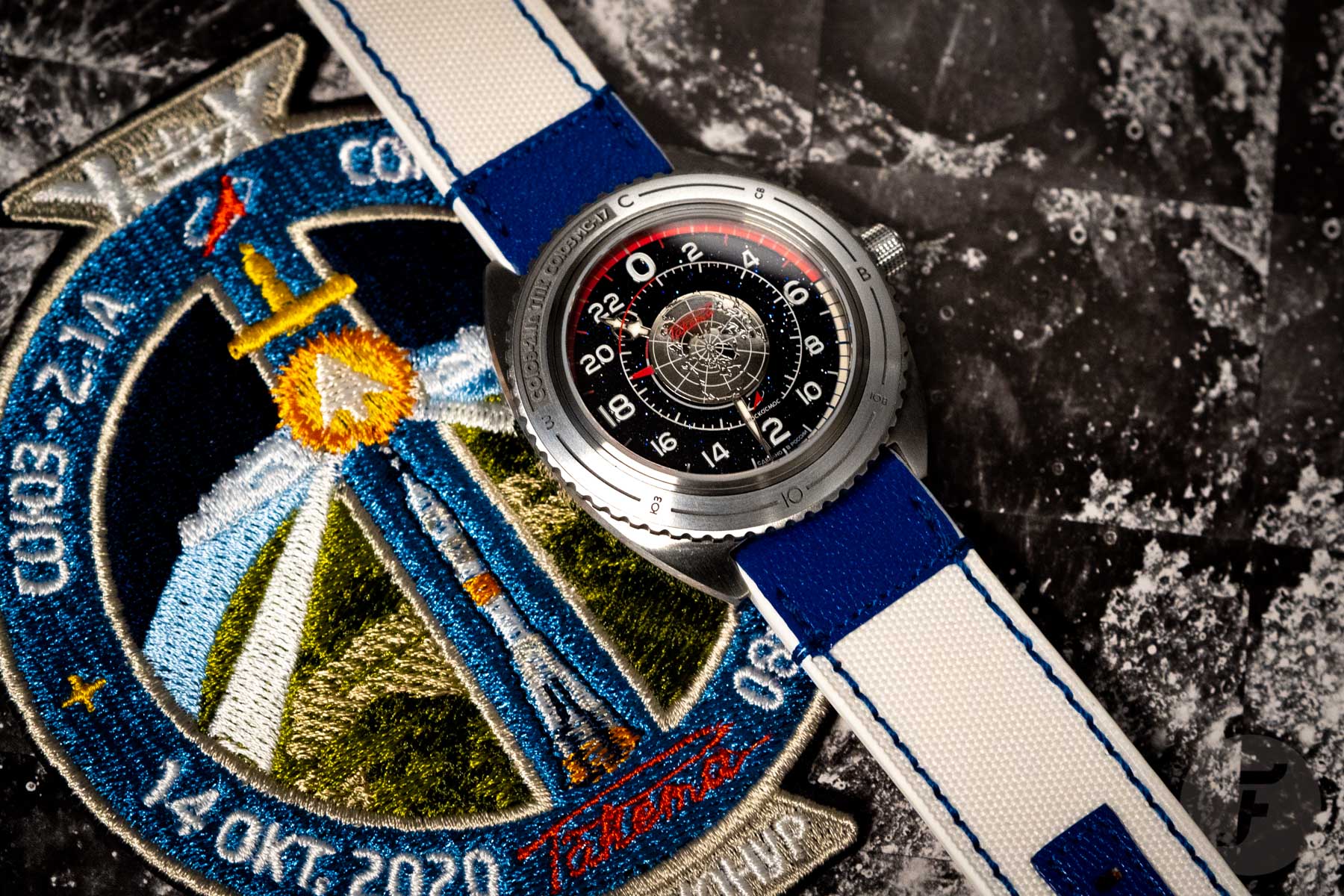 Russia’s space program (ROSCOSMOS, formerly Soviet Space Program) has achieved a great deal over the last 60 years. However, all of this would not have been possible without the iconic Soyuz rocket. Soyuz (Russian for “Union”) has made over 1,900 flights since its introduction in 1966 and remains the most frequently used space launcher ever to this day. The Raketa Space Launcher is a tribute to this vital part of space history. 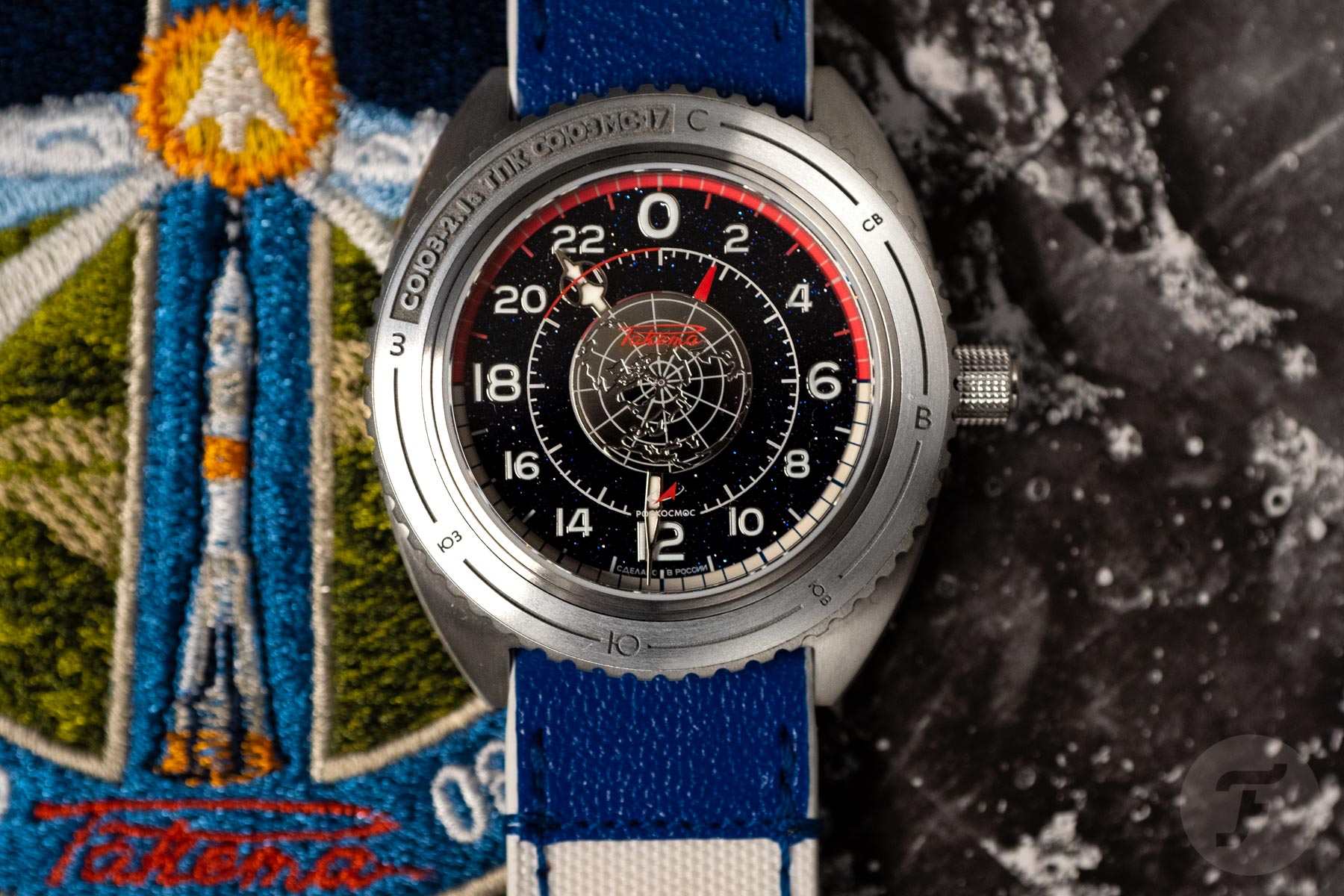 The Raketa Space Launcher’s bezel is made from a metal piece of the space-flown “Soyuz-2.1a” rocket. The Soyuz-2.1a took off on October 14, 2020, and made a record-breaking three-hour flight from the Baikonur launch pad in Kazakhstan to the ISS. The Cyrillic inscription on the bezel is the Russian spelling of the rocket name and the mission. The case itself measures 43mm in diameter, 13.15mm thick, and 47mm lug-to-lug. 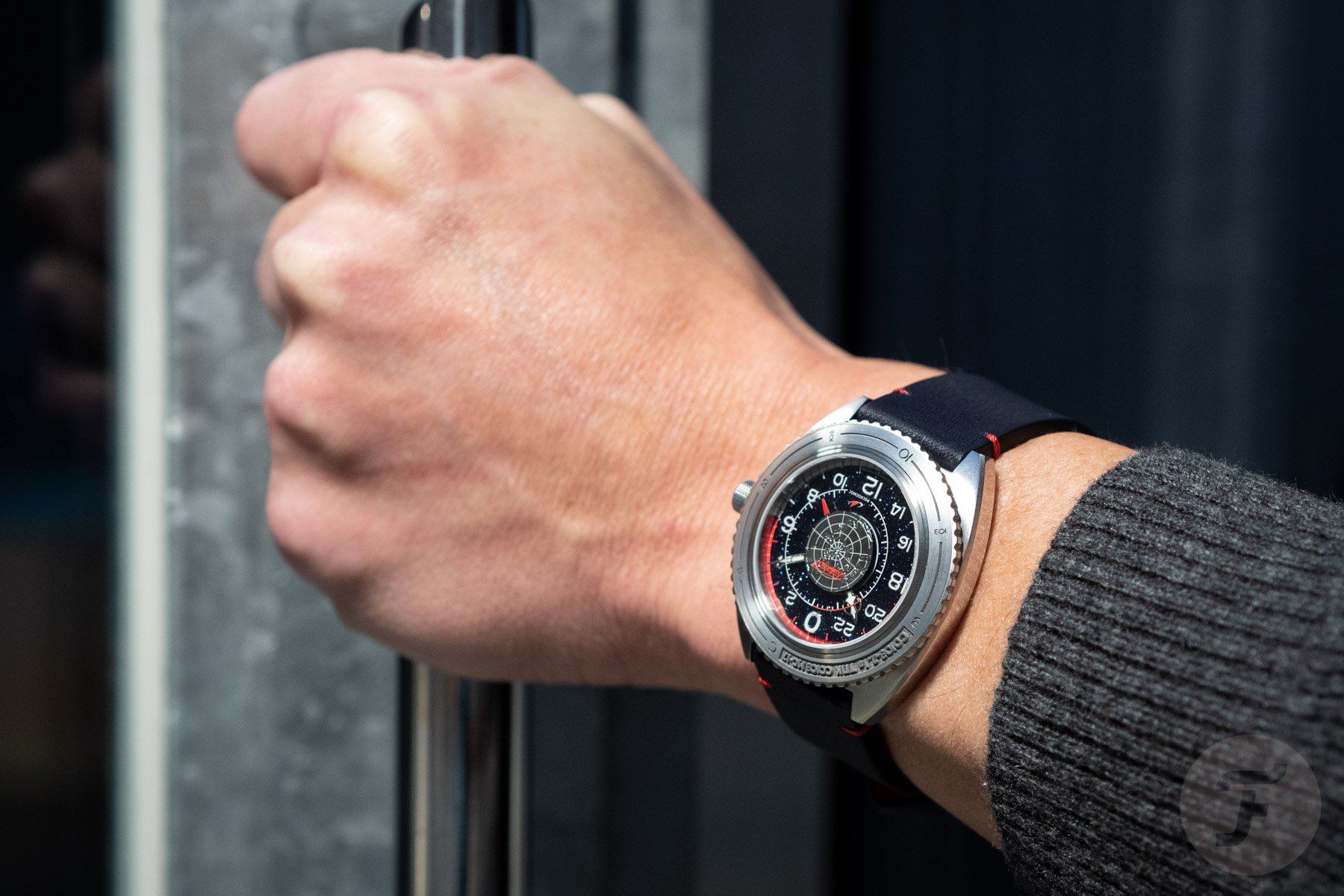 Designed in association with real cosmonauts!

Two of the Russian cosmonauts from the Soyuz MS-17 mission actually contributed to the design and production of the Space Launcher watch. Sergey Ryzhikov and Sergey Kud-Sverchkov insisted that the only complication needed in space is a 24-hour movement to distinguish day from night on the ISS. There’s nothing quite like 16 sunrises and sunsets every 24 hours to throw your perception of time and internal clock right out of kilter. 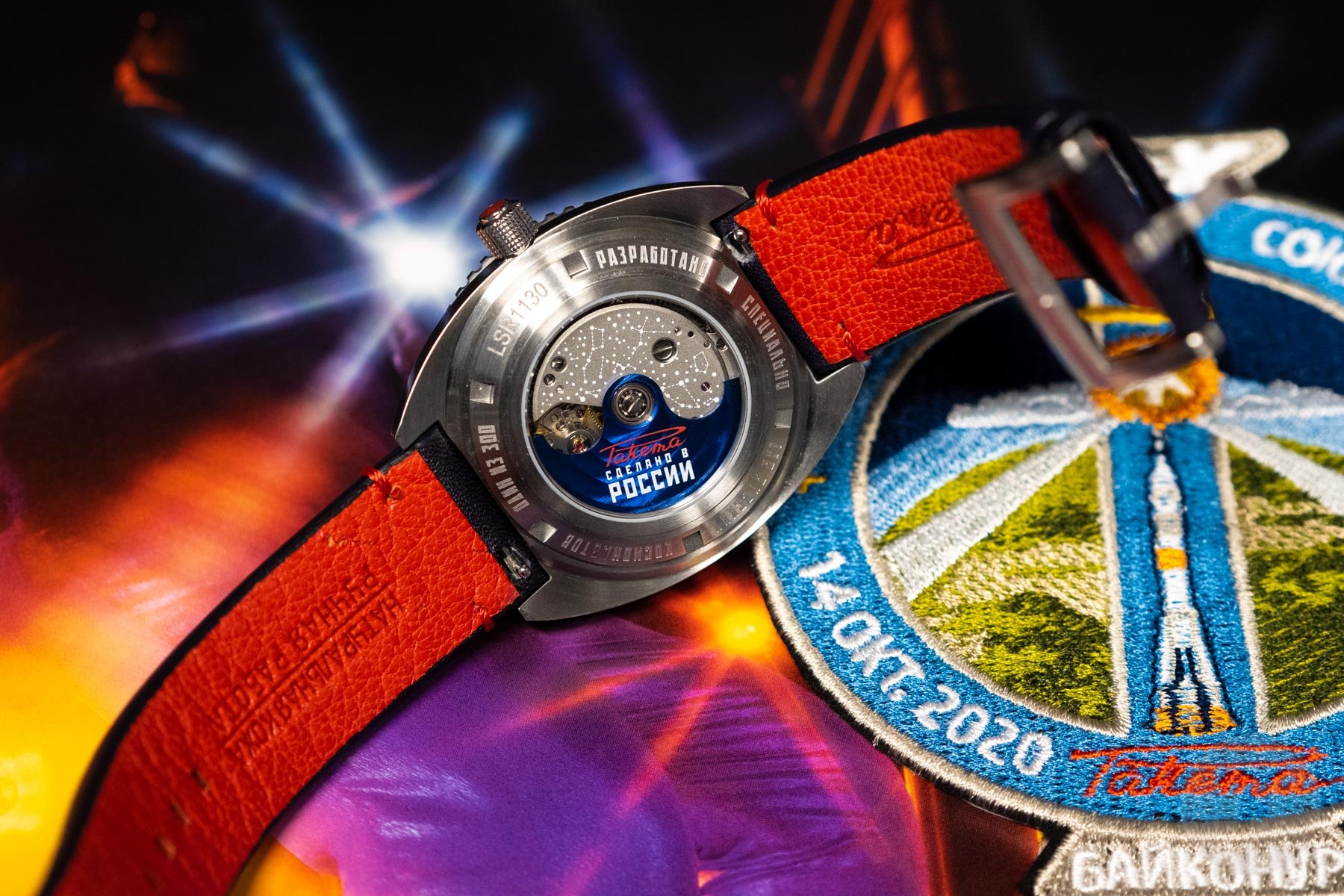 Raketa has made two variations of the Space Launcher watch. You have the choice of a white dial, which is probably my favorite of the two, or a blue aventurine glass dial. The reason I slightly prefer the white dial model is that the blue globe motif (top-down view of the North pole) in the center of the dial looks a little better, in my opinion. The globe rotates, functioning at the seconds hand, with a little red arrow denoting the passing of each second. The aventurine glass dial has a silver globe and a red hand. The aventurine glass dial itself is excellent, though. It’s a logical choice of material, reminiscent of the endless starry skies above us. 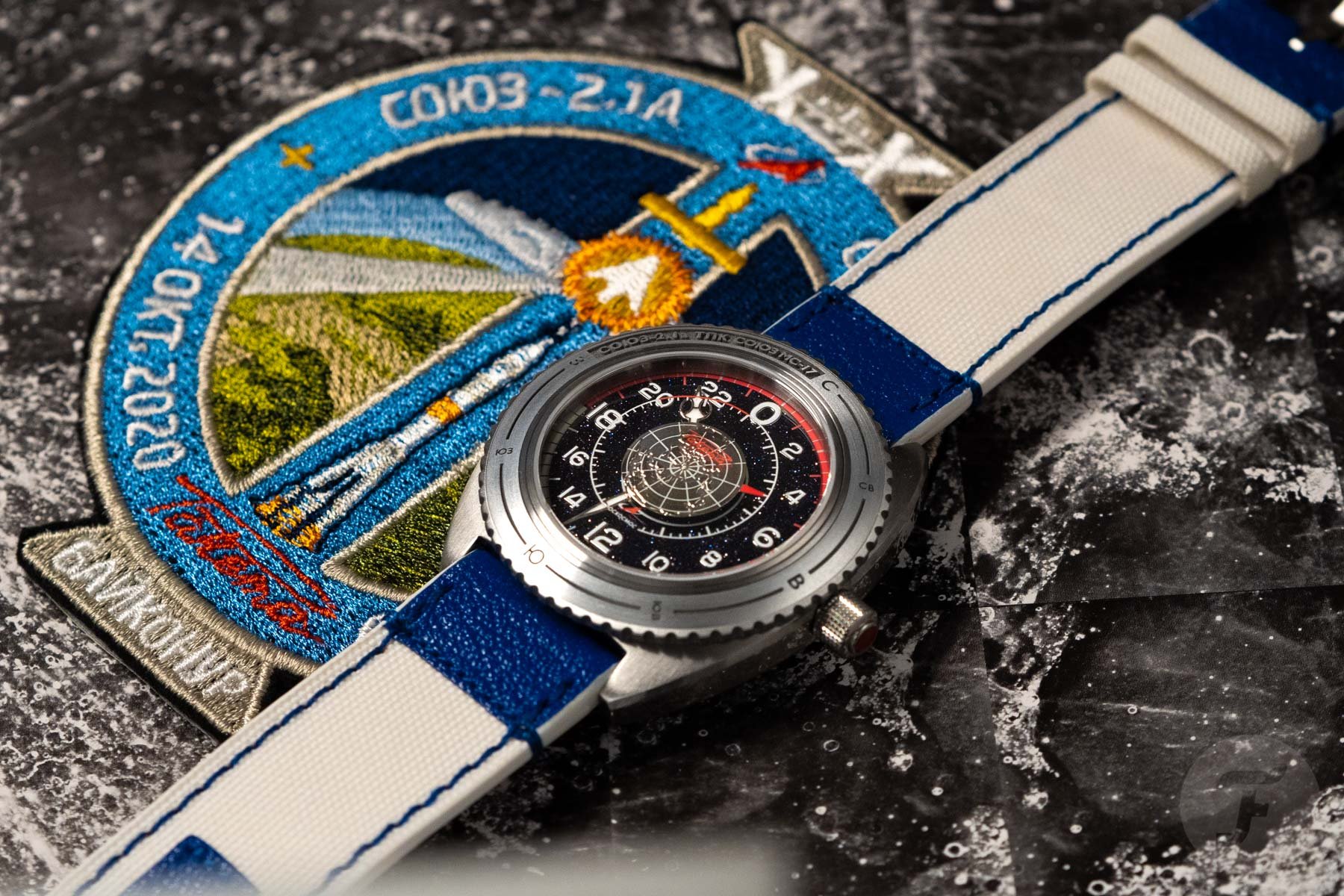 The Raketa Space Launcher comes with two straps that I like to affectionately refer to as “business” and “leisure”. The “business” strap is the white one you see in the images. It’s pretty special, as Raketa used the same fabric as used for the Russian “Sokol” spacesuits. It’s a very strong yet flexible nylon canvas and adds extra credence to the space themes at play in the watch. To some, it may seem a little cheesy, but if you’re buying this watch, you’re embracing the whole package, and the spacesuit strap just adds to the experience. 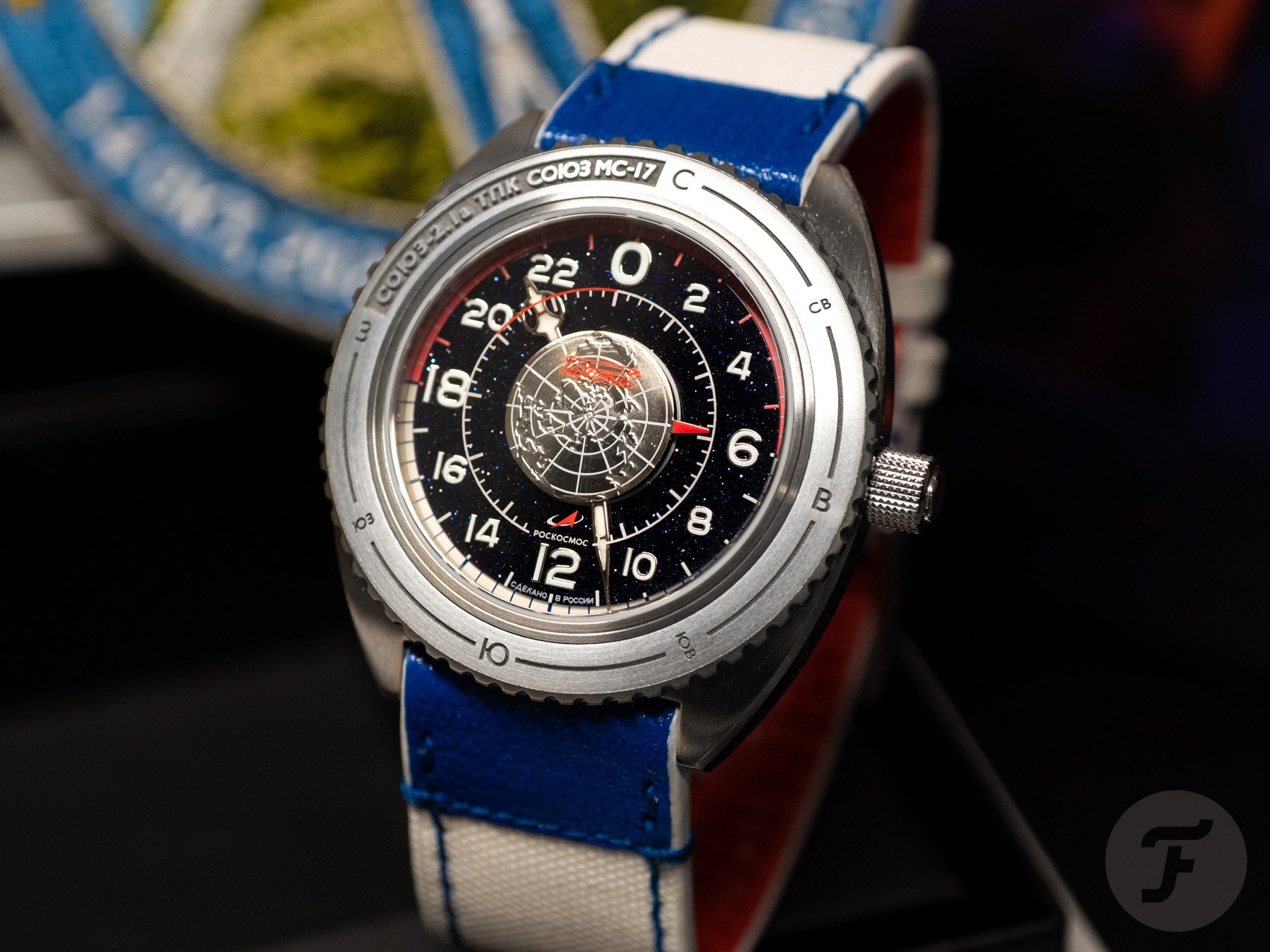 We had the version with the blue aventurine glass dial in for review. So, our “leisure” strap is a nice, simple black leather affair with red side-stitches when you want to be a bit more subtle. It’s a nice-enough strap, but I think that blue leather would have been a better choice here — just my personal opinion. The white-dialed watch comes with a grey leather strap with a blue quadruple side stitch. 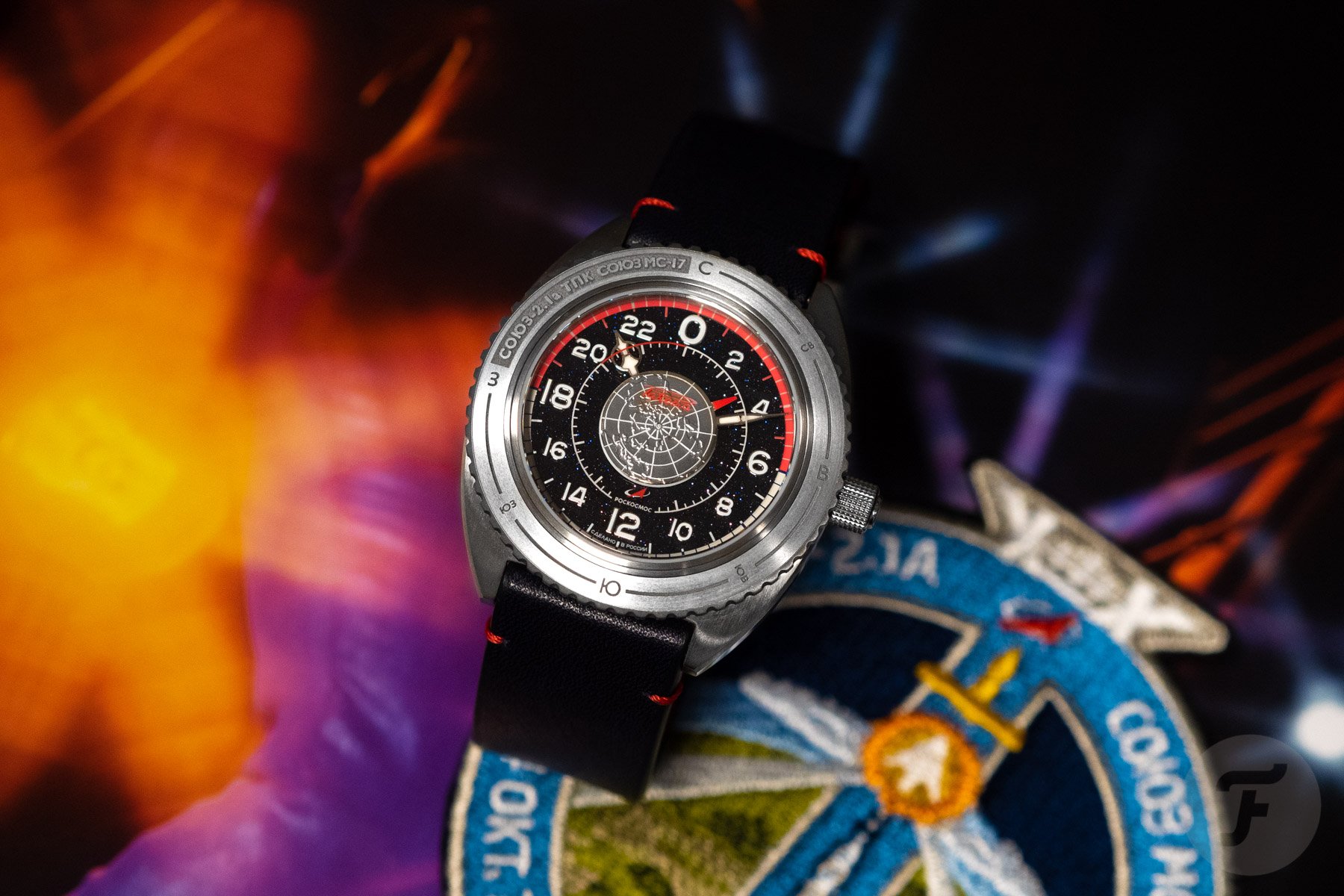 I actually saw this watch back in September at Geneva Watch Days. I wish I’d been able to get more photographs of it there and then, but the lighting in the hotel was terrible. And I mean terrible. But that’s another story. While chatting with the Raketa team, I was informed that everything was made in Russia. The straps, the cases, the movements, everything. That’s right; the Space Launcher uses an in-house movement, the Raketa caliber 2624A.  It’s rather nicely decorated, too, with constellations printed on the bridges and a unique, vivid blue rotor. It operates at 18,000vph, with an average rate of -10/+20 seconds per day. It also has a 40-hour power reserve. 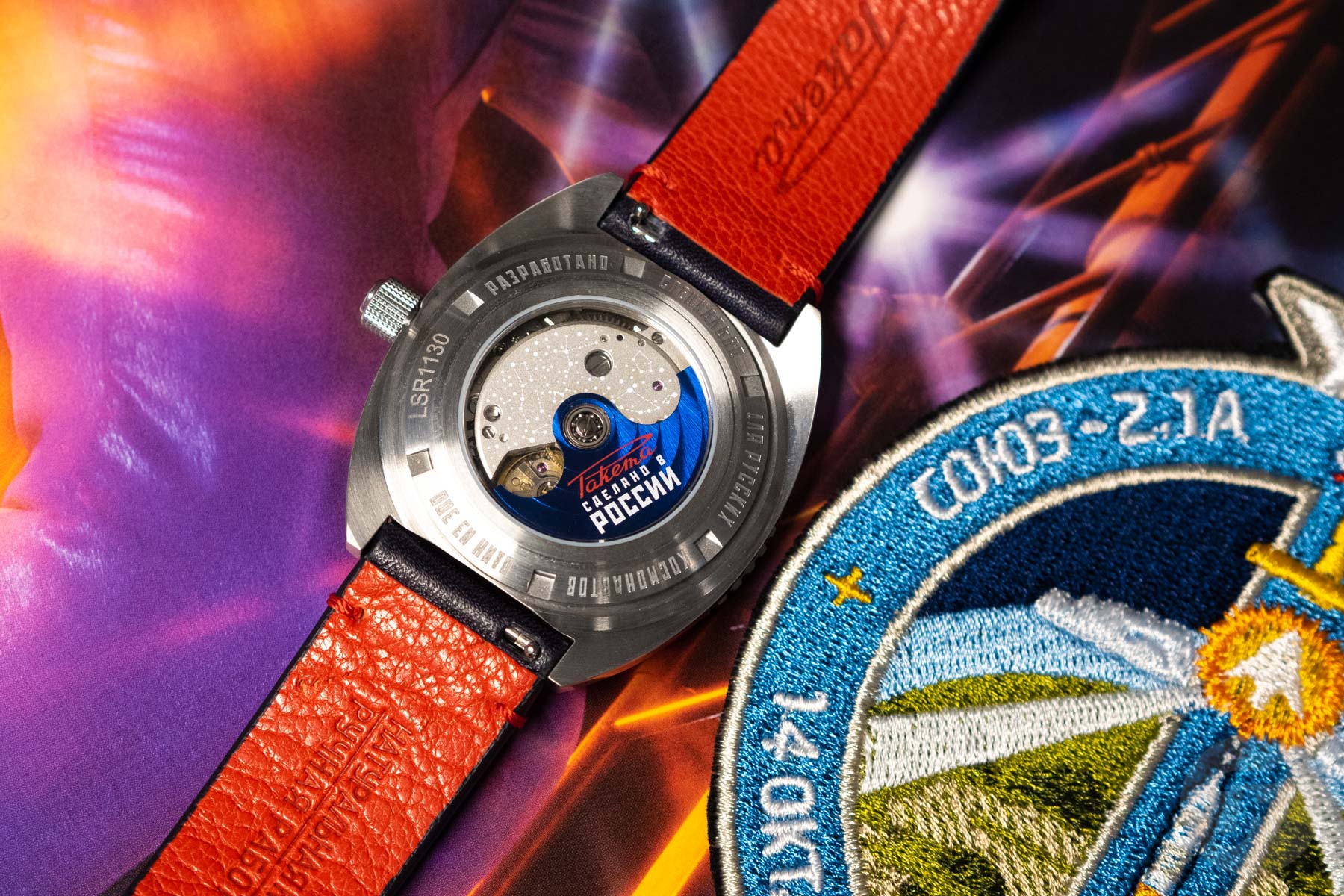 The entire package is made in Russia too, and it’s one for the collectors. As well as the watch and the two straps, buyers get an official mission patch and a letter from ROSCOSMOS certifying the origin of the Soyuz metal bezel and the spacesuit fabric. 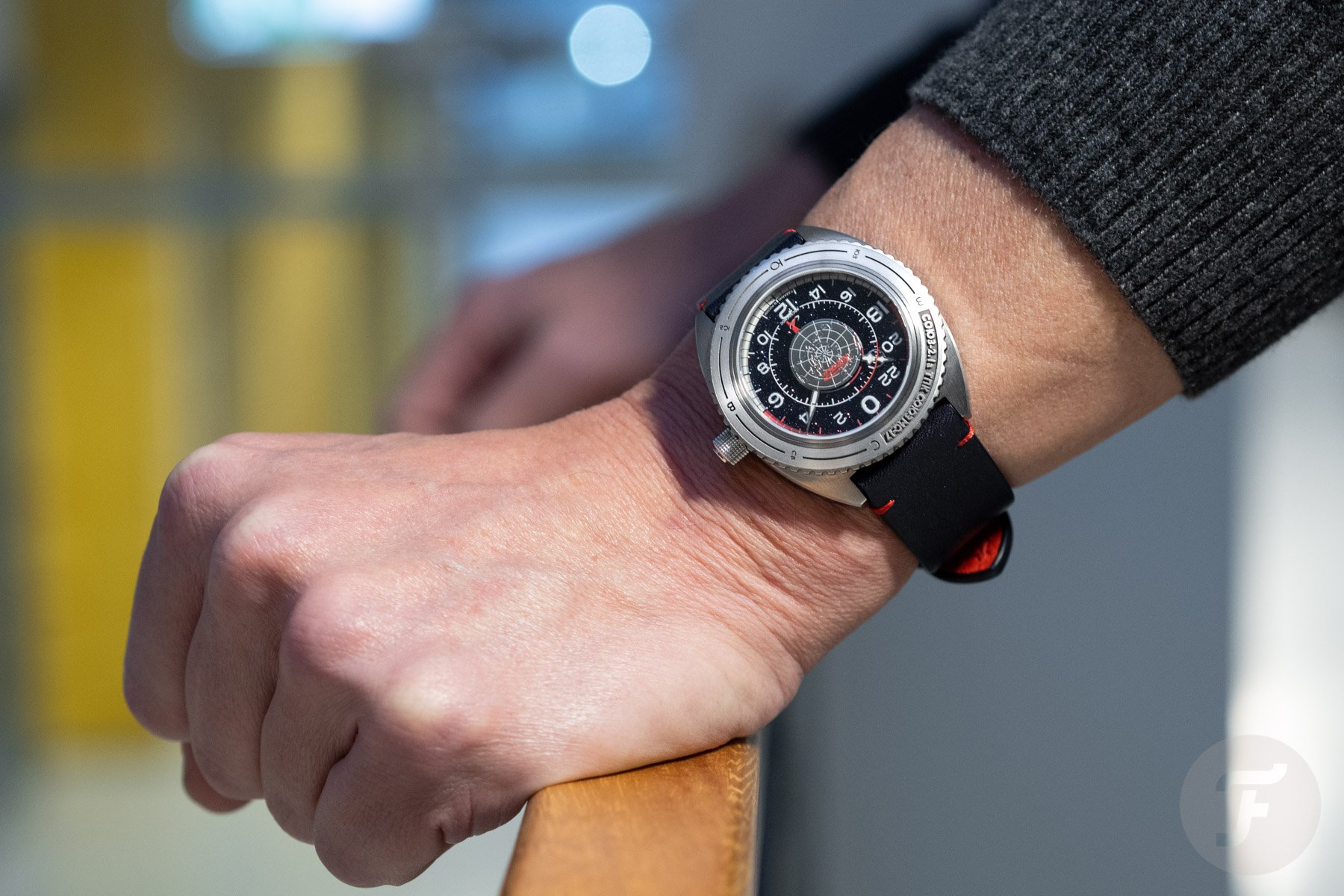 2021 marked an important milestone in space history. Blue Origin, Virgin Galactic, and Inspiration4 took civilian crews into outer space. As the civilian space race heats up, tickets into outer space will set you back several million euros. Nevertheless, I’m sure the price will come down. And hopefully within our lifetime, as I’d love nothing more than to go to outer space. Until that day, the Raketa Space Launcher brings a little piece of space history to you in the comfort of your own home for a fraction of the price. 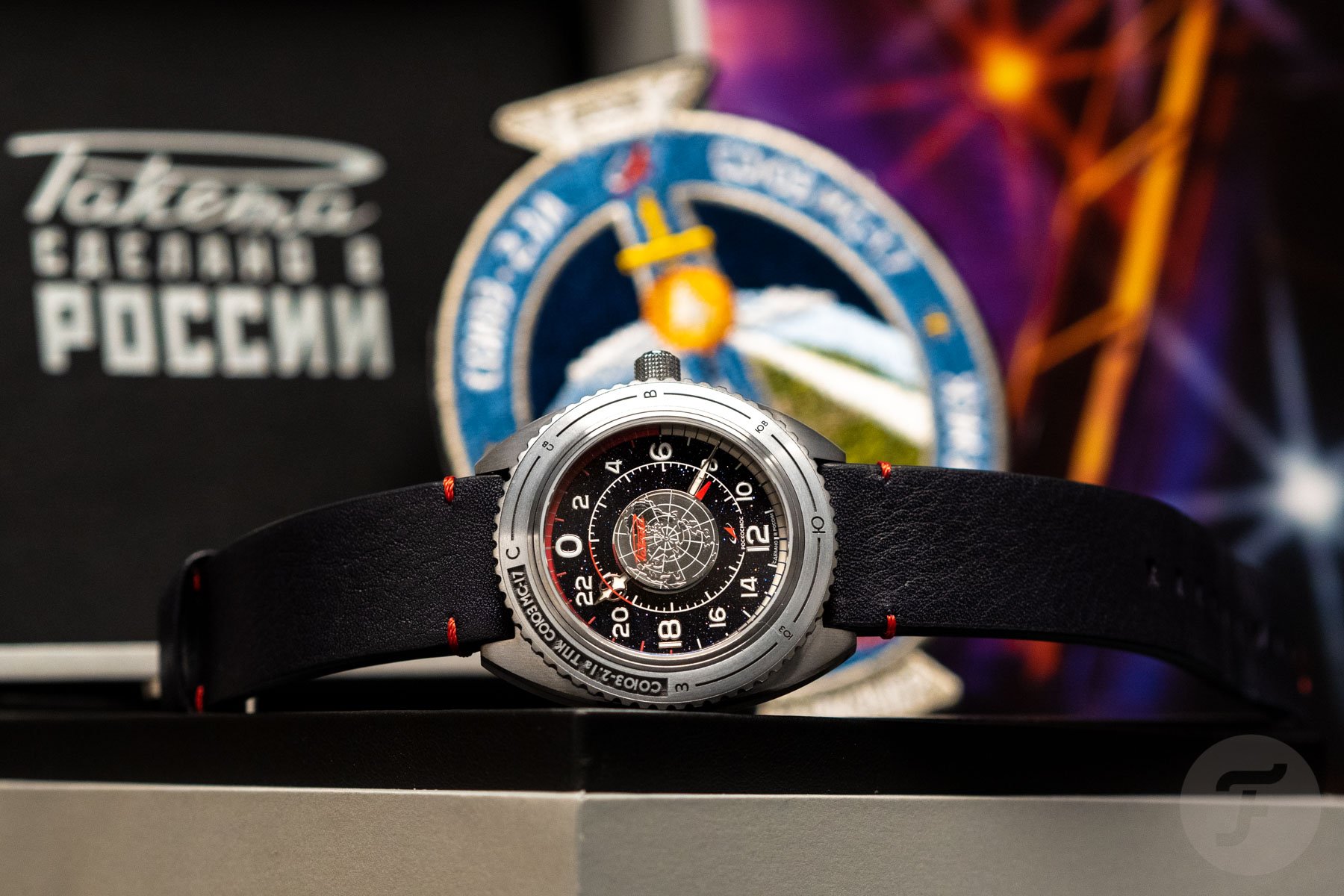 Visit the Raketa website to find out more about the Space Launcher watch. The aventurine glass model shown in this review costs €1,542 excluding taxes.