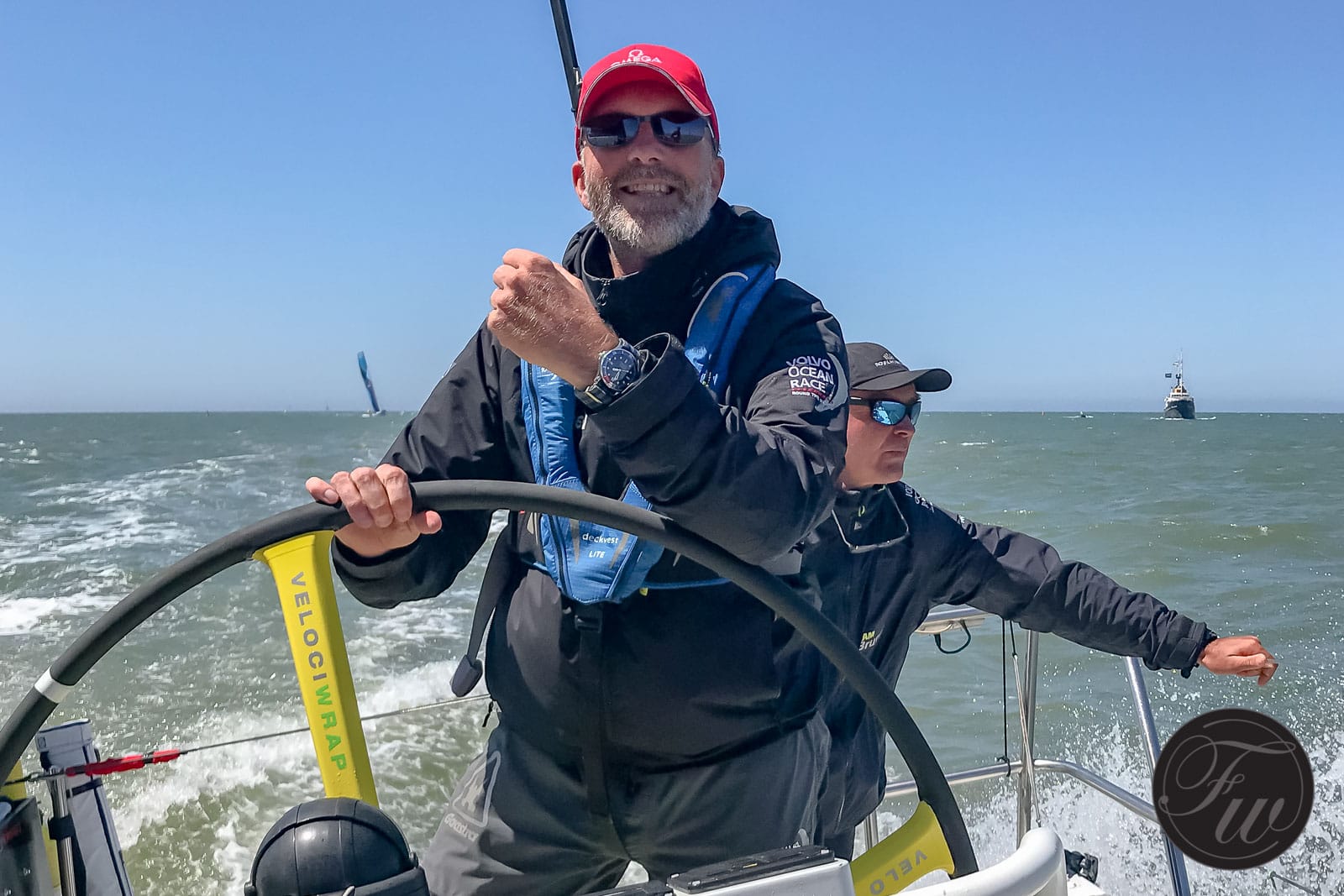 Gerard has quite some sailing experience, but I went in quite blank, to be honest. But, I can already tell you know, that the whole event did not leave me unaffected. I just wish I had been able to watch some of the coverage of the race up front before I would step on board on one of the Volvo Ocean Race boats for a 2-hour long sailing competition. After seeing some of the videos and coverage shot by the teams during the prize ceremony a day later, I found myself truly moved by the sacrifices these sportsmen had to make. In retrospect, the few hours I was on board on the ship that actually sailed 45.000 nautical miles around the world, across four oceans, are even more special now that I have seen that on-board coverage than during the sailing. Which was already impressive, to say the least.

Formula One On The Water

But back to that Friday morning June 29th. Gerard and I use our bicycle to go to Scheveningen (The Hague), where the Volvo Ocean Race village is located for approximately a week. Using your car isn’t an option, with only limited parking space and the fact that thousands of spectators will try to do the same. We meet with the representatives from Omega in the morning, and only a few minutes later we find ourselves entering the Volvo Ocean Race boat from the MAPFRE team. A lot of carbon fibre, for weight purposes, and I am amazed how they can host 8 to 11 people on board this ship for so long. Everything is highly efficient, including the kitchen and ‘bathroom’.

It struck me that the Volvo Ocean 65 race boat is just like an F1 car, but on the water. Everything is high-tech, light-weight and highly efficient. All to be able to be as fast as possible. And safe.

Now, it was time for some action. Omega arranged that we could join a race with the Volvo Ocean Race teams. We would actually be part of the Team Brunel crew. After we received the appropriate clothing and safety instructions, we were brought to the boat by a RIB. 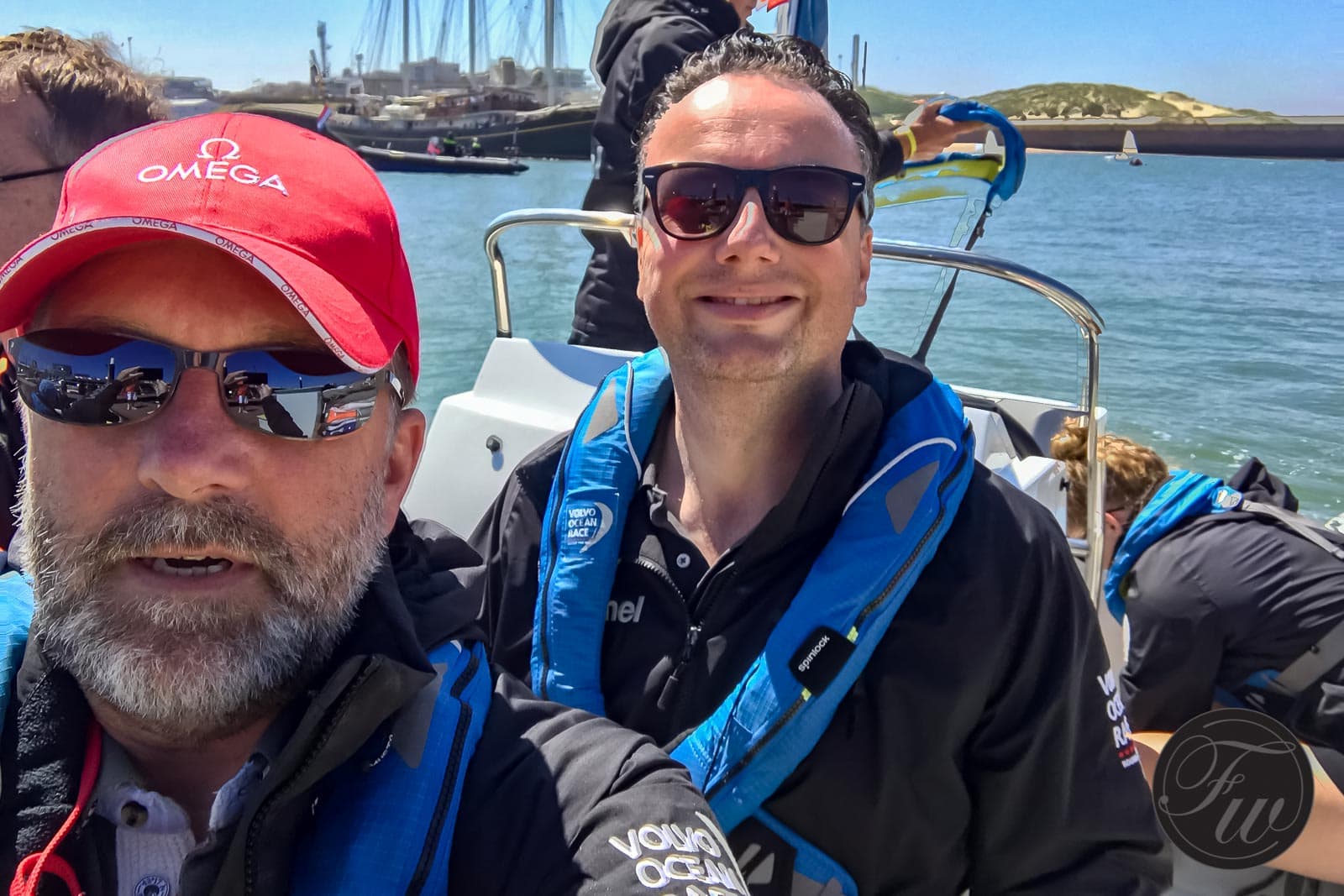 We followed a race prior to ours and noticed that the Dutch King was actually on the ship we were about to enter. After the King left the boat, we were brought on board. It was actually quite exciting and I noticed I was actually a little nervous, as I just witnessed how these Volvo Ocean Race boats are almost lifted out of the water during the sailing. But once on board, the crew told us what to do and more importantly, what not to do (keeping an eye on certain lines on board the ship). I was also happy that Gerard was joining me, as he is an experienced sailor. Different ships, but I guess the concept of sailing remains the same. Strapped with our Omega Seamaster 300M watches, we were ready for some action on the North Sea.

Omega is the official timekeeper of the Volvo Ocean Race. That doesn’t mean every skipper was wearing an Omega watch, but what we did notice, is that they actually do use their wrist watches for countdown purposes. I always wondered whether they would use watches on board, as you can easily get stuck behind a line with your watch, but the sailing suits cover it up quite nicely. One of the sailing crew used her watch to do a countdown out loud when something needed to be done by the crew. She was wearing a digital watch though, not an Omega.

After just a few minutes, it was ON. I’ve never witnessed such a speed before on the water with a sailing boat, and it wasn’t even doing that fast according to the crew. When hanging with your feet over one side of the ship to compensate for the weight, you can really enjoy the speed and peace of sailing. The weather was awesome and we weren’t encountering any (big) waves. The Team Brunel crew had enough trust in the guests, as we were asked if we could help to grind during sailing and if we would like to be behind the steering wheel. Since that’s probably a once in a lifetime opportunity, we did not want to disappoint the crew and you (for the pictures). Everyone really enjoyed the race and no one felt the urge to feed the dolphins. Perfect! I can only imagine how this must be when there are huge waves or even during a storm. I don’t envy the professionals during the Volvo Ocean Race and looking at some onboard footage we were presented, later on, I kept wondering how crazy these guys (and girls) must be to do this. It is not without risk or danger (one of the sailors passed away when he fell overboard during the Volvo Ocean Race 2018, leaving behind a wife and kids). 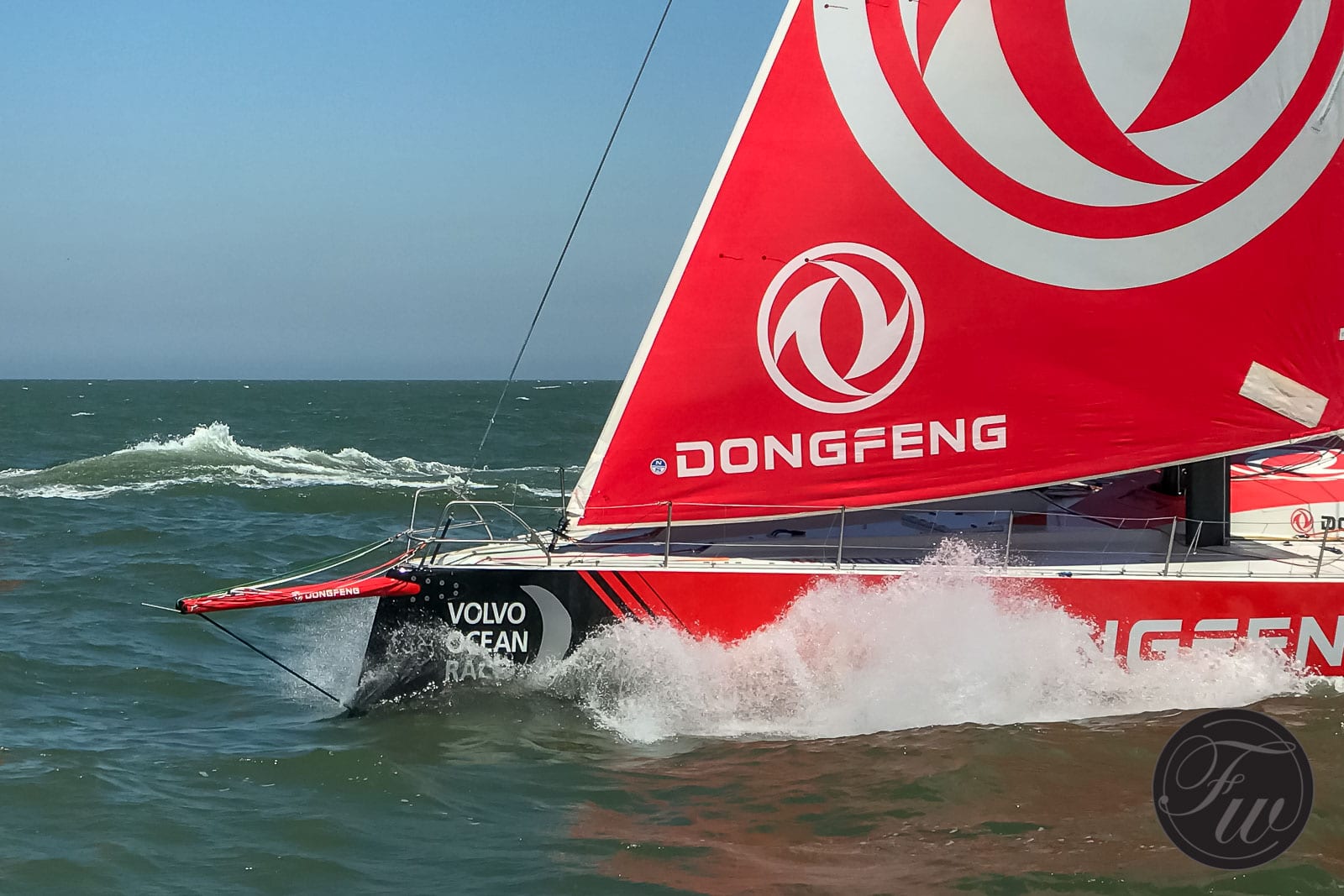 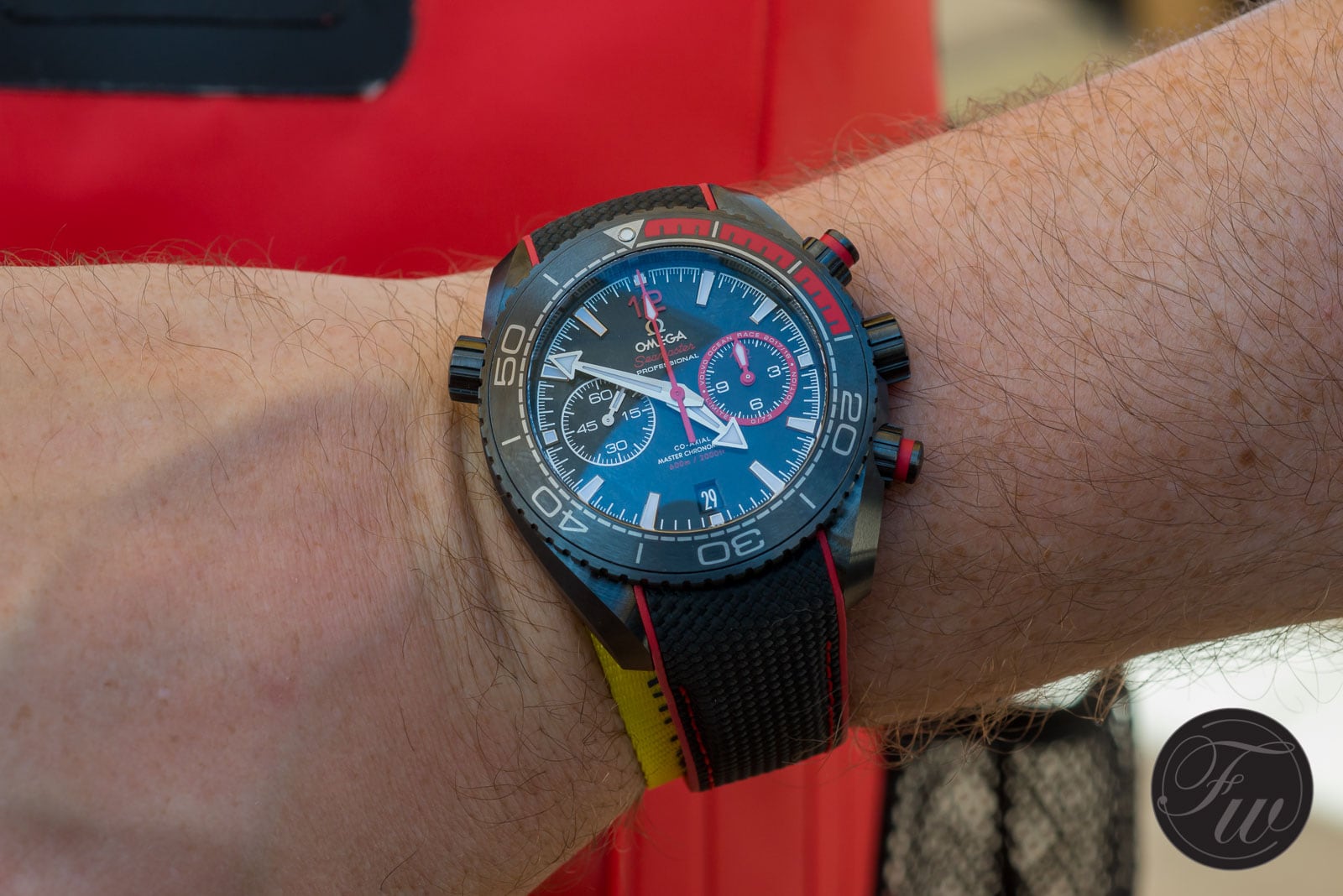 Before heading over to the Awards Night that was held in The Hague, we were able to play around with the Omega Seamaster Planet Ocean Deep Black Chronograph limited edition for the Volvo Ocean Race 2018. The Omega Brand Manager responsible for the Benelux market made sure to bring one so we could see and try the watch.

Limited To 73 Pieces Only

Although Gerard and I wore our Seamaster 300M watches (a 2531.80 and 2296.80 for those who are interested), the official Volvo Ocean Race 2018 award watch is this Planet Ocean Deep Black chronograph. You might remember the introduction of the Deep black two years ago, but that wasn’t a chronograph.

Omega created a special watch for the Volvo Ocean Race 2018. A Seamaster Planet Ocean Deep Black Chronograph Volvo Ocean Race with Calibre 9900, limited to 73 pieces only. This number might strike as odd, but it refers to 1973 when the first race was held (then Whitbread Round the World Race) where the late Sir Peter Blake was one of the sailors (and later on became a valued ambassador for Omega). The winning team (Dongfeng) of the Volove Ocean Race received this watch and they all seemed very happy with it (of course). The remaining number of this limited edition Seamaster Planet Ocean Deep Black chronograph is being offered through Omega’s retail network. 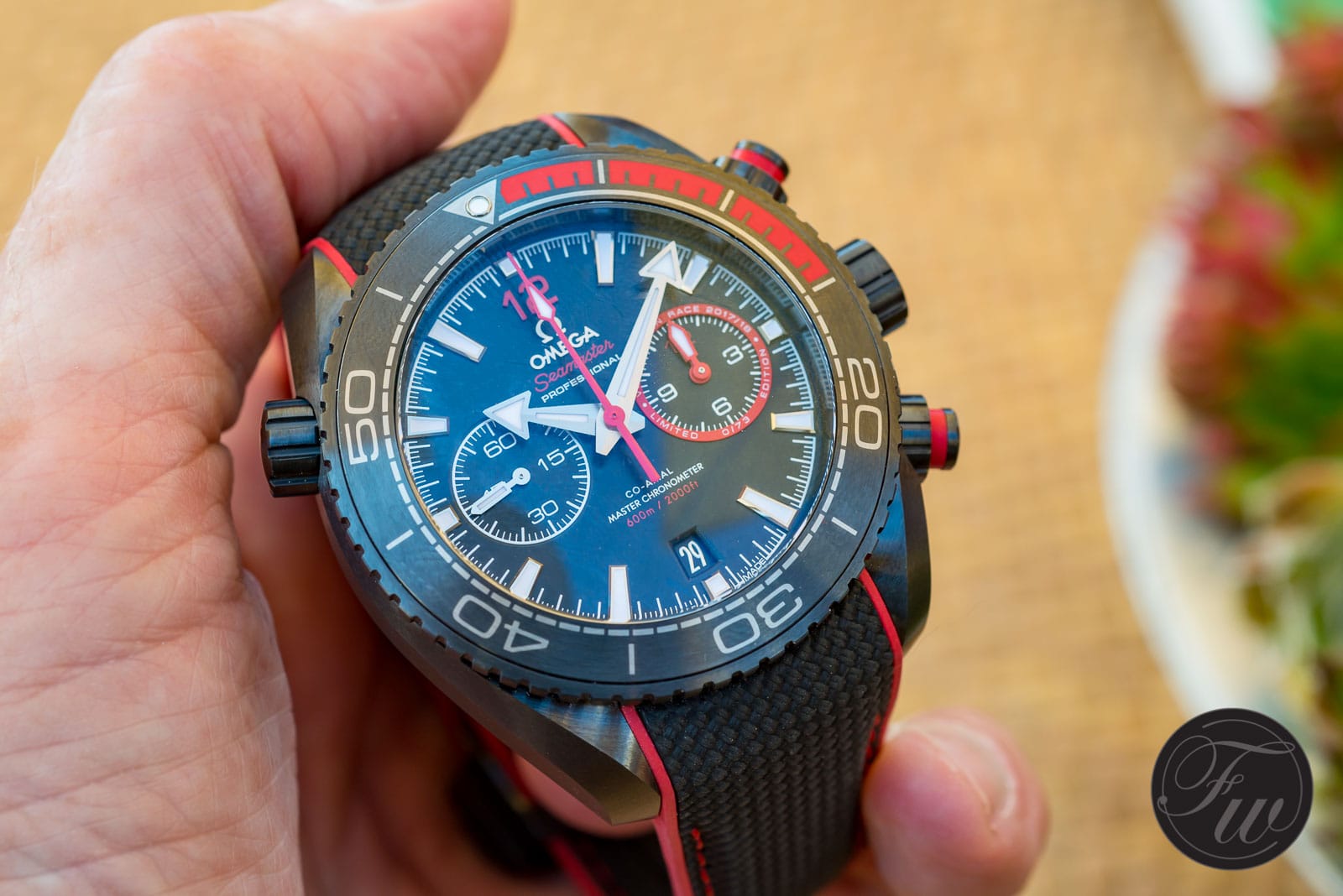 It is the first chronograph model of the Seamaster Planet Ocean Deep Black series and specially created for the Volvo Ocean Race. The black and red look awesome and on the dial, we find the very recognizable two counters. One for the running seconds, and one for the elapsed hours and minutes. Hands and hour markers are made of white gold, of course. The dial indicates that it is a Master Chronometer and has the Co-Axial escapement. Furthermore, you will find the Volvo Ocean Race 2017/2018 inscription on the red ring of the hour recorder at 3 o’clock, including the unique number of the specific watch. The red ring, the red chronograph second hand and red ’12’ on the dial match perfectly with the red rubber inlay in the ceramic LiquidMetal bezel and the chronograph pushers. 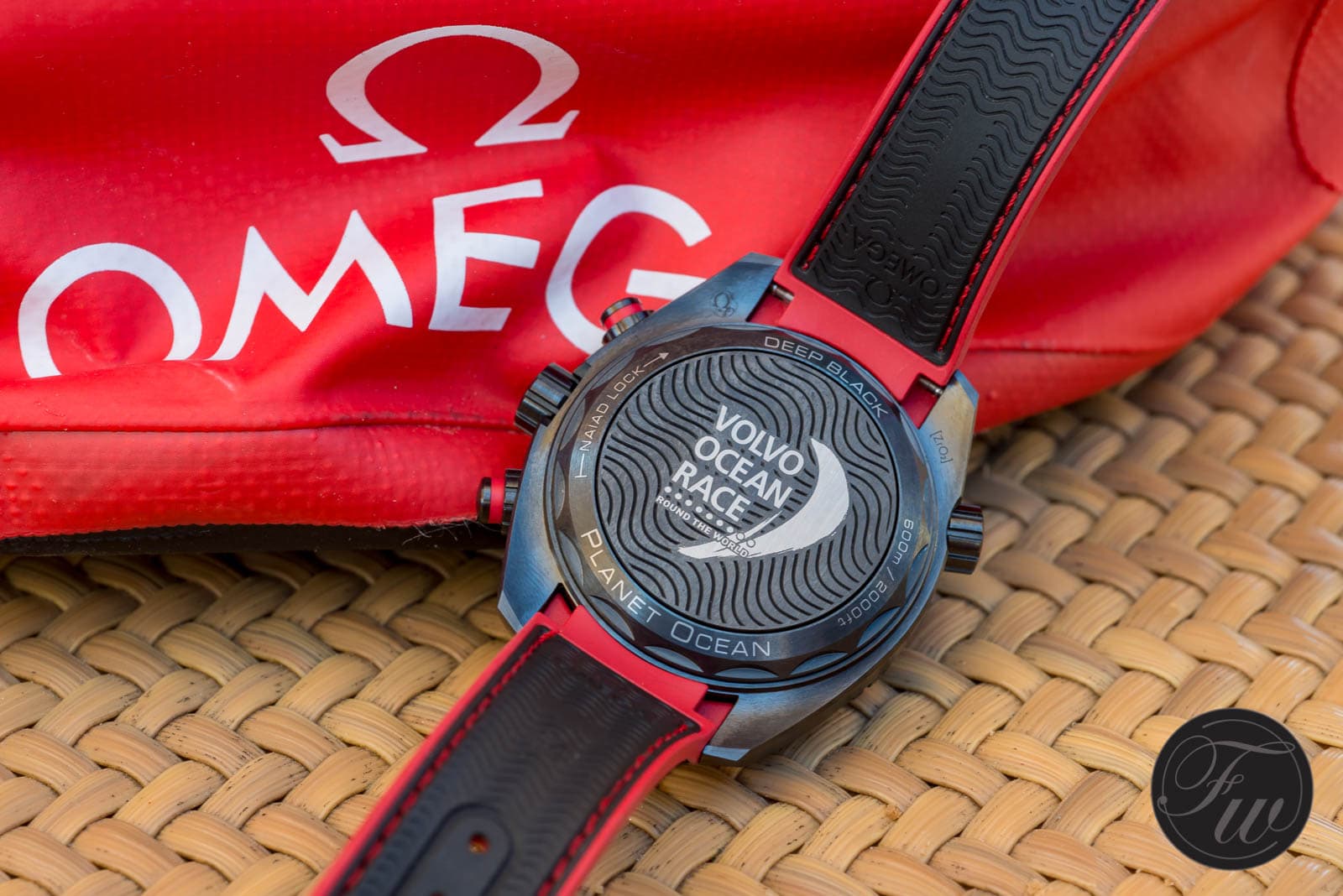 The caseback also makes it special, with the ‘Volvo Ocean Race Round the World’ inscription. Just like the other Deep Black models that we reported about, this watch also has the NAIAD Lock. This way, the caseback is always aligned when closed. In this case, it means that the inscription is always straight. The Seamaster Planet Ocean Deep Black Chronograph Volvo Ocean Race watch is mounted to a rubber strap with red accents. This 45.5mm diameter watch is very present on the wrist, but not only due to the size. The black and red make it stand out! Like all Planet Ocean models, the water resistance is 600M.

The awards night was something I’ve been looking forward to. Around 2000 guests: the sailing teams, their staff, their families, the organization, press, fans and HRH King Willem-Alexander of The Netherlands. Since it would be more than awkward to show up at this event in our sailing outfits, we went home to change and headed back to the congress centre in The Hague where the ceremony would take place. Suited up and with a fitting watch, I was seated next to the Benelux Omega team and Gerard of course. Gerard took some images as close as possible during the event, as you can see below. 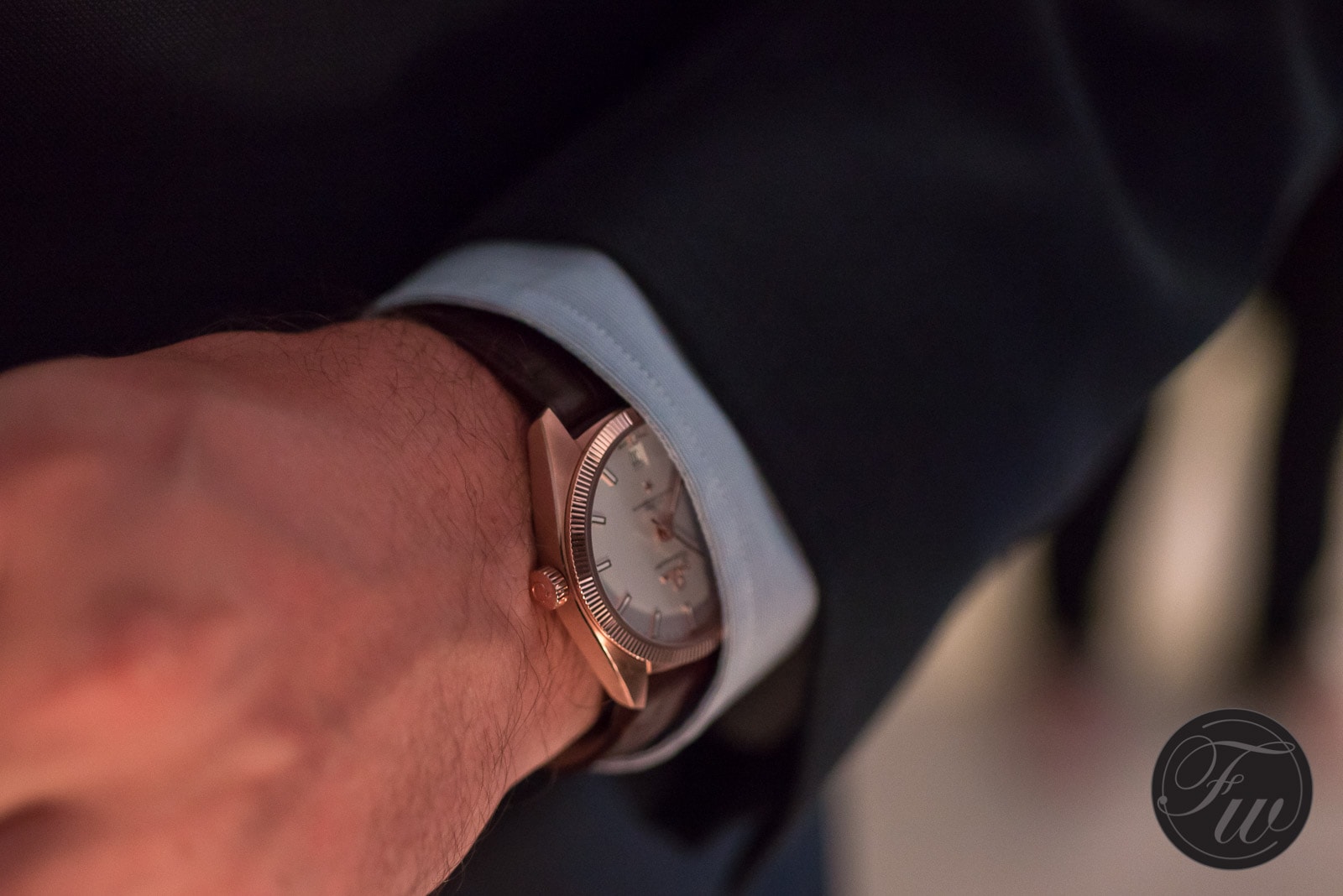 After a warm welcome, with a drink and a bite, we were directed to one of the large auditoriums in the Congress building. With 2000 thousand people, we were welcomed by the Volvo Ocean Race organization and some of their sponsors. Teams were introduced on stage and we saw some stunning footage from the Volvo Ocean Race 2018 on the large screens. Some of it was quite emotional, as sailor John Fisher from the Team Sun Hung Kai/ Scallywag was lost during the 7th leg on March 26th as he was swept overboard, 1400 nautical miles west of Cape Horn. A short interview with him was shown as well as a tribute was paid to this great sportsman.

As the evening continued, with great stories, interviews and live music, finally the winning team was asked on stage for the official award ceremony. After Omega’s representatives handed over the Omega Seamaster Planet Ocean Deep Black Volvo Ocean Race watches to the winning crew of the Dongfeng team, HRH King Willem-Alexander was asked on stage to congratulate them and hand over the Volvo Ocean Race Trophy.

The evening ended with a wonderful dinner in a different section of the building, with live music and the possibility to hit the dance floor. No need to say that it got very late that night. 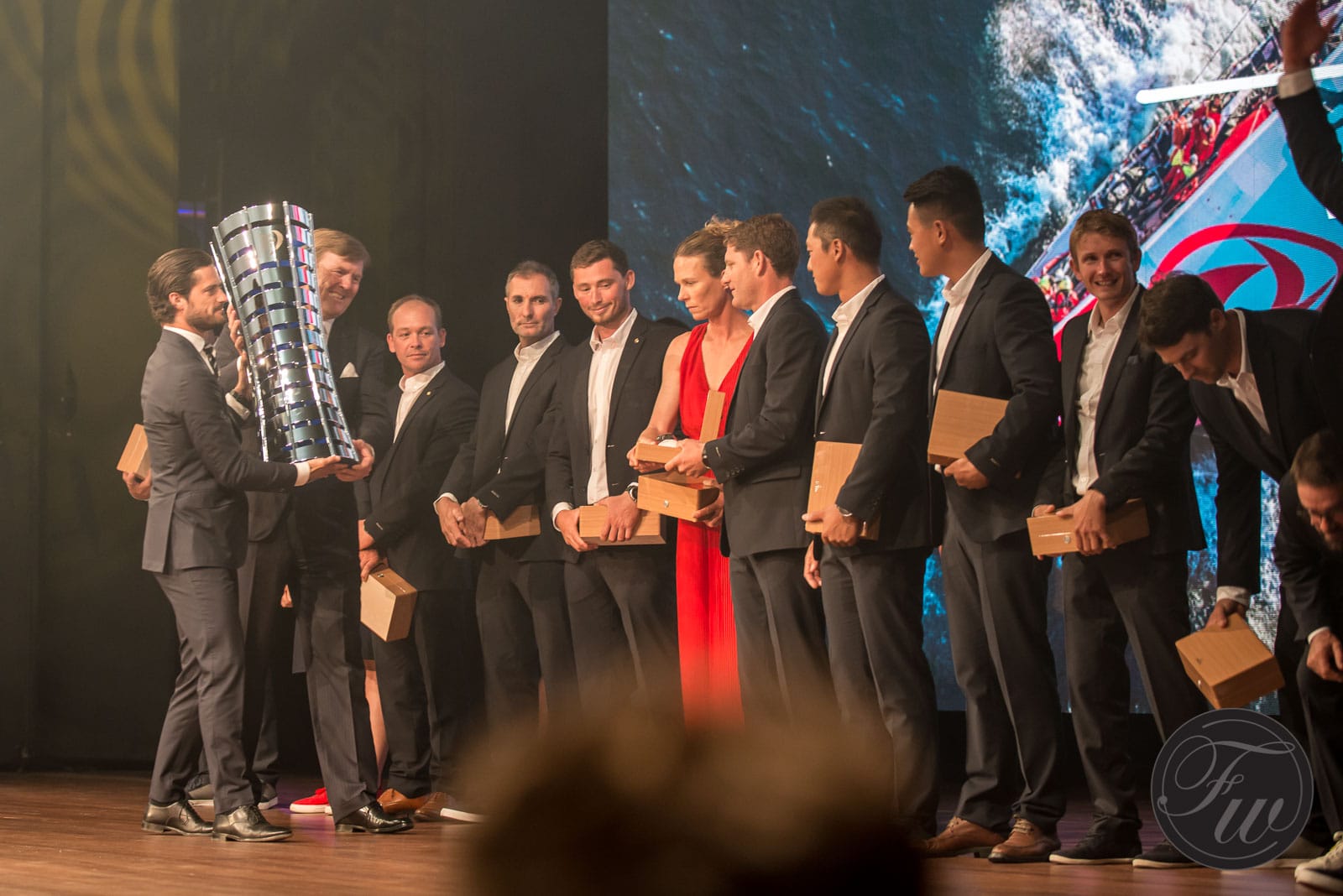 One Of The Most Impressive Experiences

Sailing on a Volvo 65 race boat has been one of the most amazing things I’ve ever done. This work for Fratello Watches has allowed me to race cars, be in helicopters almost touching snowy mountain tops, going to places where I would normally never be able to visit and I am very thankful for that. Over and over again and I realize that this is very special and all because I love watches and decided to start writing about them. My wife and daughter (hopefully) understand as I have to miss them for quite some time every month with all the travels. This was a home game for Gerard and me, so I was lucky that this was so convenient. It also means I was not prepared to witness something so impressive, to be honest. Japan, Dubai, China, New York, Capri etc. and other exotic places have impressed us so much, that I didn’t even think about how epic this sailing weekend could be in my own hometown. Once we were on the Team Brunel boat, sailing out of the harbour with a comfortable yet impressive speed, it struck me how beautiful and special this was. During the awards night, it became even more clear to me that being on a boat where the men and women worked so hard and experienced happy moments, as well as very emotional situations, is very special. A big thank you from both Gerard and me to Omega and all involved but also to the Volvo Ocean Race organization that hosted a wonderful event in The Hague.