You probably know that Omega introduced the Seamaster in 1948 and that it looked nothing like the dive watches of today’s collection. Actually, those first Seamaster models were based on Omega watches that were supplied to the Royal Airforce during WWII. The British’ required reliable watches with high precision movements and, water resistant cases. René Bannwart, head of the creation department at that time and responsible for the Omega Centenary models, was asked to come up with a watch that would be robust and sporty. However, at that time, even though the lugs were beefier than the Centenary and the bezel and case were much thicker, it still doesn’t really correspond with the idea of a water resistant watch that we have today. Water resistant was also quite relative. Weird, as Omega knew how to make divers watches already since 1932 with their rectangular “Marine” model. 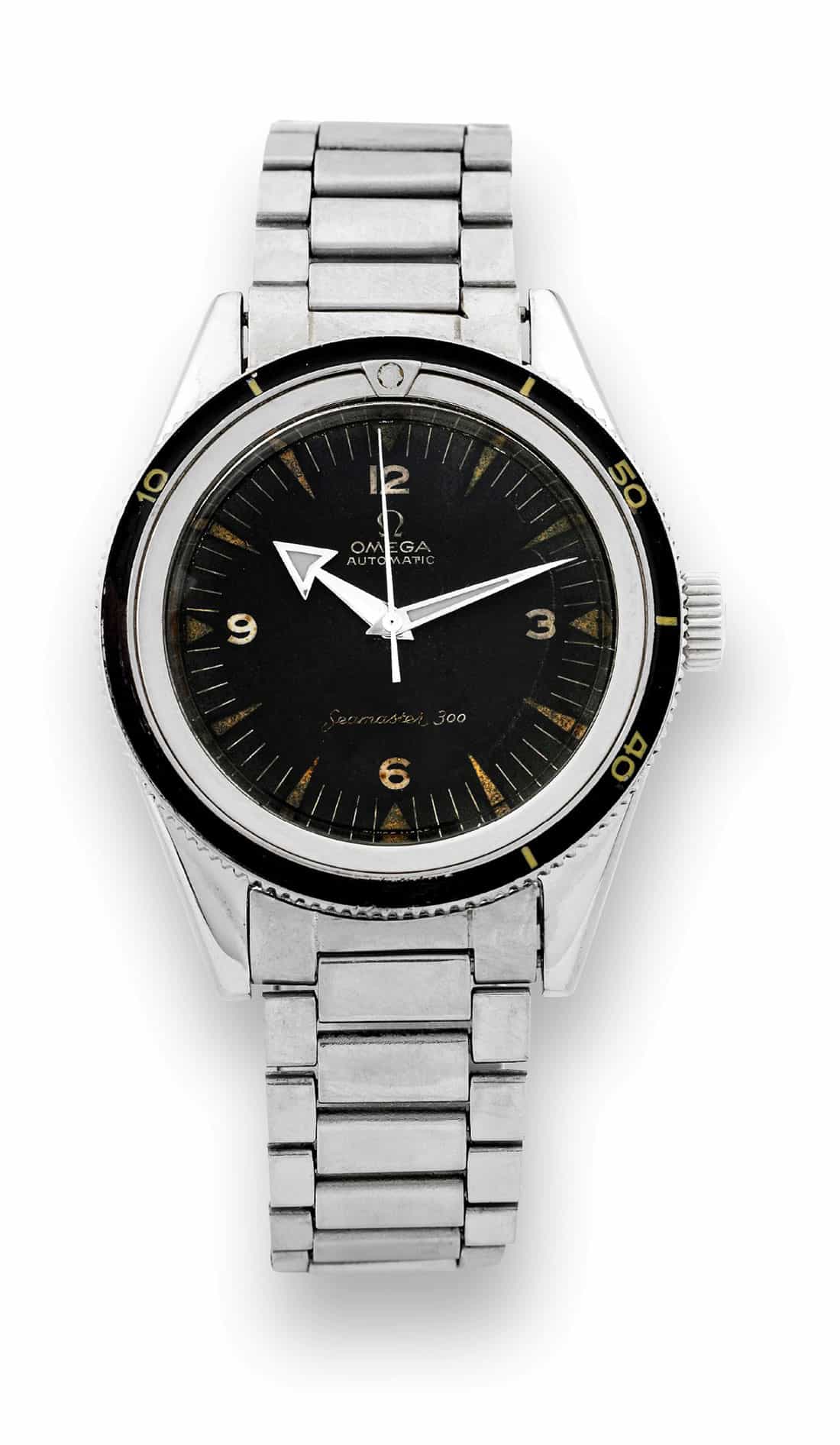 The Seamaster 300 from 1957 was water resistant to 200 meters (no typo) but named 300 meters as it is said to have out performed the testing equipment at the time. Those were only limited to 20 bars. The crown system (“Naiad”) and high resistance of the crystal were for the large part responsible for this. Furthermore, the Seamaster 300 had of course a rotating bezel with diving scale on it. The bezel also tightly locked the super domed crystal on this watch. 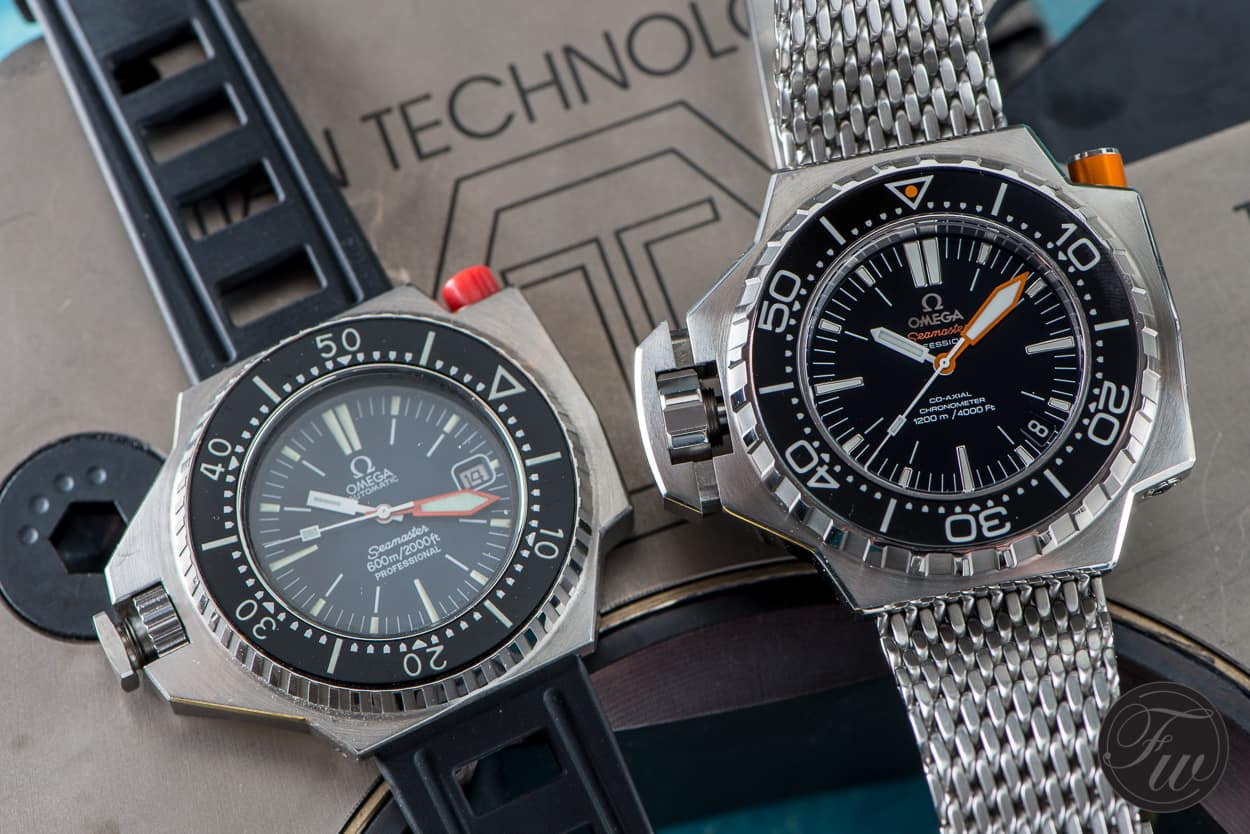 Omega kept on developing their divers watches, with the help of COMEX and Jacques Cousteau. One of the most famous and talked-about divers watches was the 1970 Omega Seamaster PloProf (we did an in-depth review of the modern and vintage version here).

Fast forward 1993, when Omega introduced the Seamaster Professional 300M. A model that is still in the collection today, but updated with a Co-Axial movement and with a ceramic bezel. However, that Seamaster Professional 300M – later became the Bond watch, in 1995 – put Omega on the map again for a lot of people in the 1990s, that something I dare to say so. We called it the sleeper watch a while ago, as prices started to increase on these reference 2531.80 Seamaster Pro 300M watches and regaining popularity again (click here for that article). I personally have the chronograph version of the Seamaster Pro 300M in titanium, a watch that I call a hommage to chronograph legend Chuck Maddox (and here is why). It remains to be one of my all-time favorite do-it-all watches. Light weight, strong, sturdy 7750 movement and an iconic design. You could say the bracelet is a bit 1990s, but very comfortable and easy to replace with a nice rubber strap. The Seamaster Professional 300M, or Diver 300M as Omega calls the collection today, has a helium valve at 10 o’clock, uni-direction diving bezel and a highly legible dial.

Many variations of the Seamaster Pro 300M have been created, for the Olympics, for the America’s Cup, for James Bond (find an overview of all JB models here) and even a pair of stunning GMT and regatta versions.

The Seamaster Aqua Terra came to life in 2002, and heavily influenced by the heritage of Omega’s Seamaster collection but not a genuine divers watch. 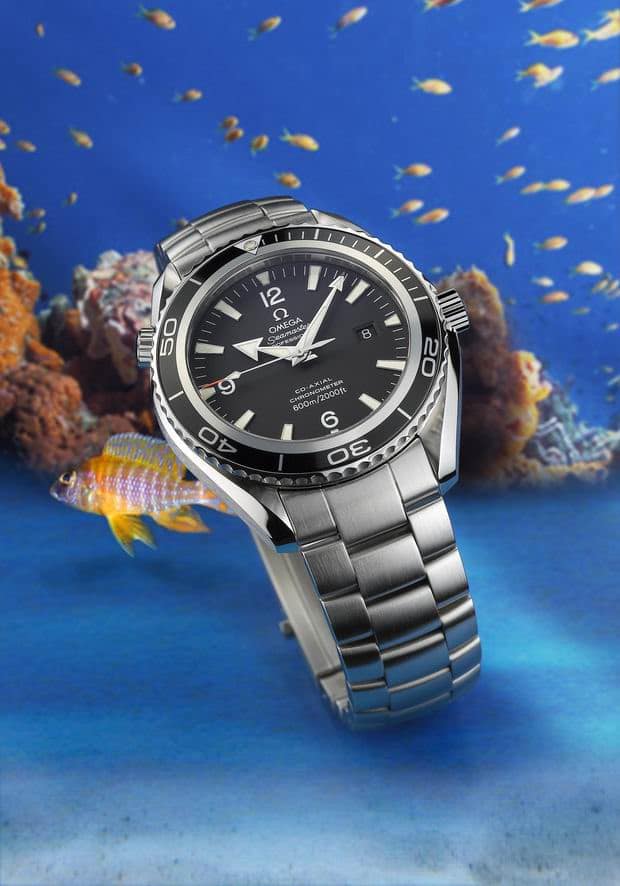 An early 2005 teaser of the new Planet Ocean 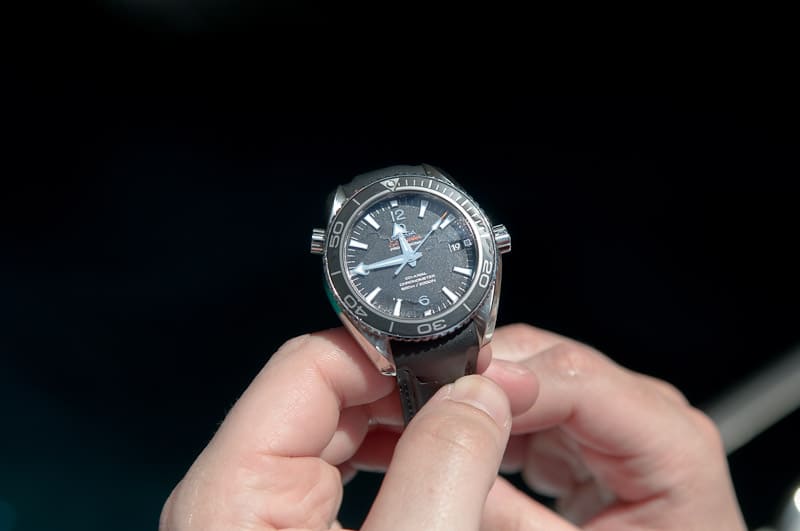 With further improvements of materials, like ceramics and Ceragold, the Seamaster Planet Ocean is a very interesting alternative to some of the other established divers watches out there. The use of in-house manufactured caliber 8500 and 9300 movements made it one of the best value for money diving watches out there, that definitely frowned some eyebrows in Geneva and Schaffhausen. 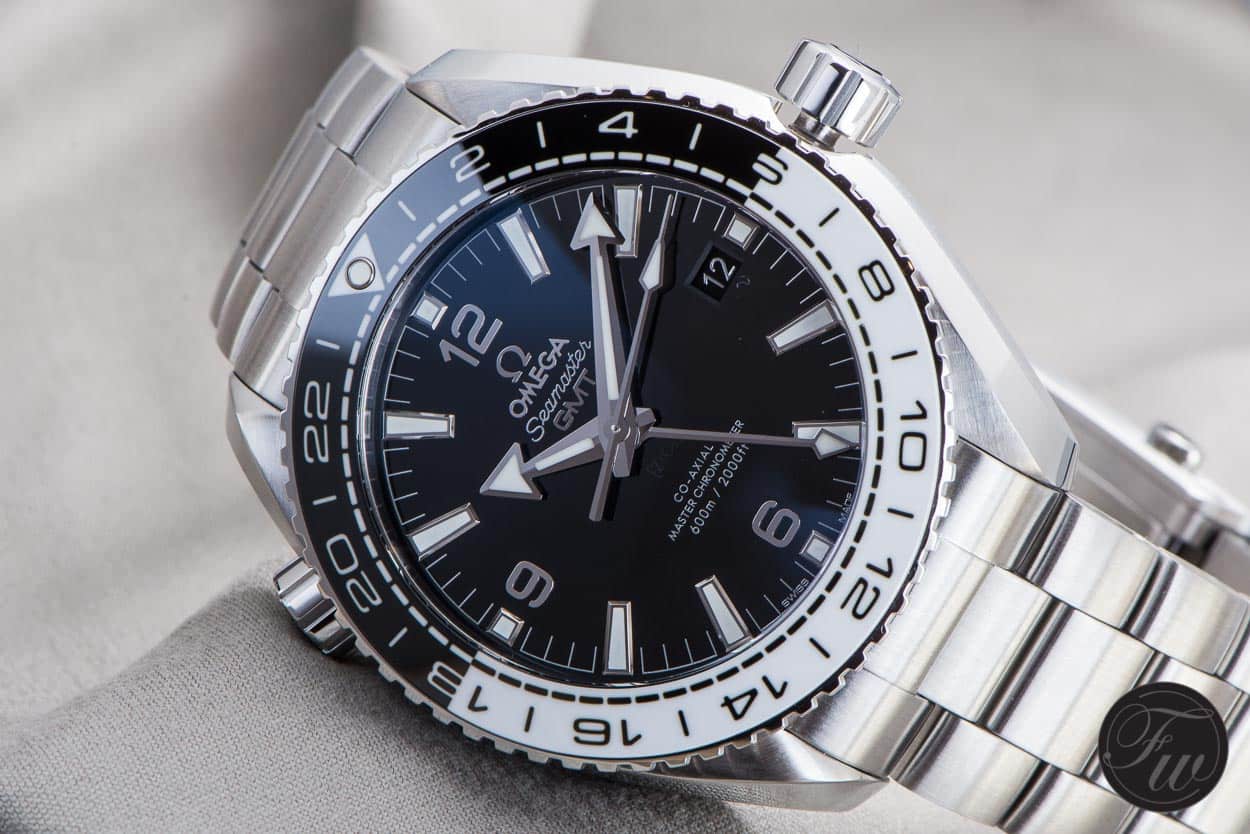 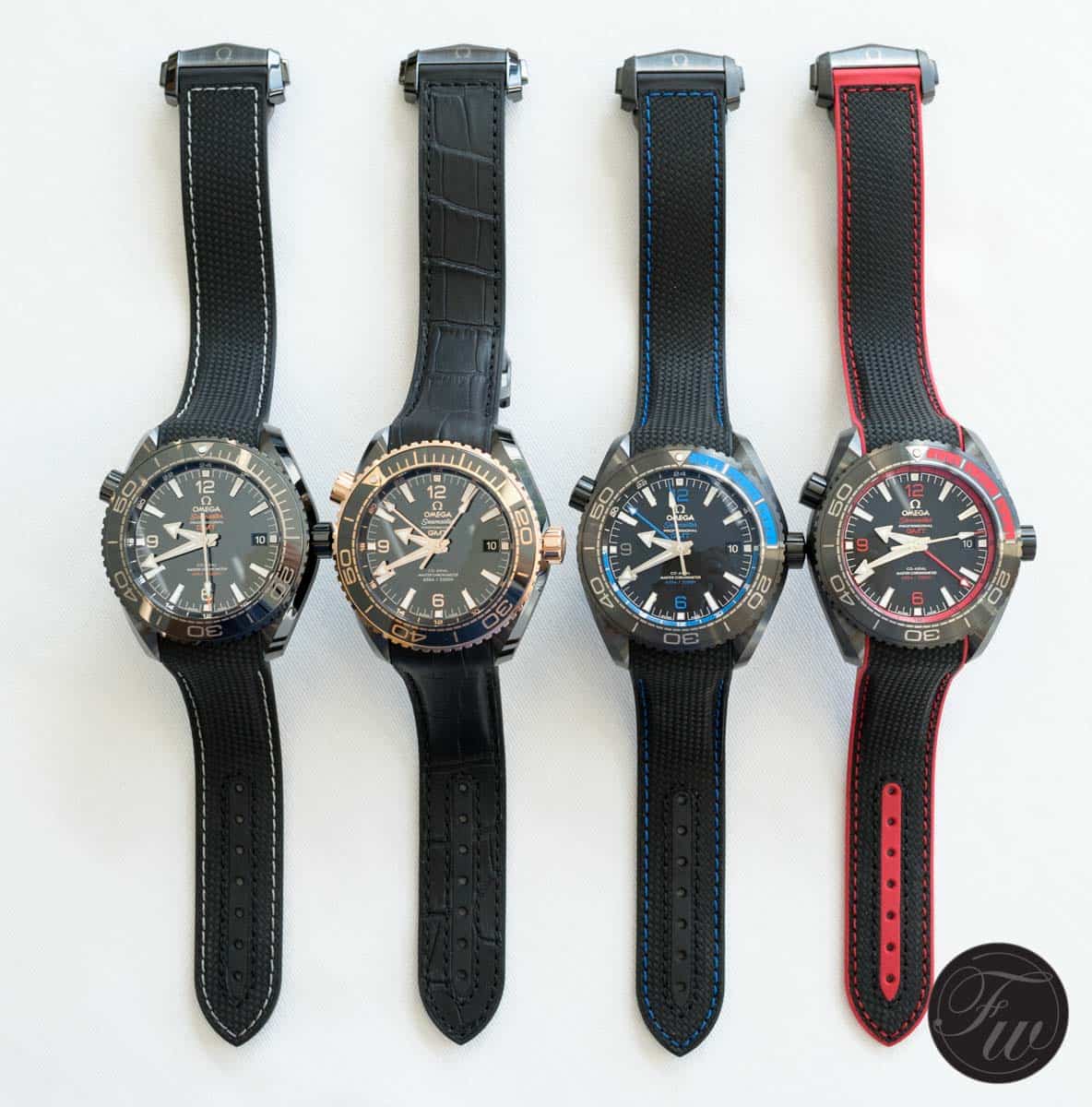 The Omega Seamaster Planet Ocean Deep Black is a 45.5mm watch, crafted from one solid ceramic block and able to withstand pressure at a depth of 600 meters (~ 60 BAR). Just like the Dark Side of the Moon, the dial is also made of ceramic.

This new generation of Omega Seamaster Planet Ocean models uses the new Master Chronometer movements, certified by METAS (more on the METAS standards here), liquidmetal for the diving scaled bezels and – of course – ceramics. For the Sedna gold version, Omega used their Ceragold method to blend the 18 carat gold with the ceramics of the bezel. On the blue and red versions of the Omega Seamaster Planet Ocean Deep Black, the blue and red are made of rubber and has been blended into the ceramic bezel. 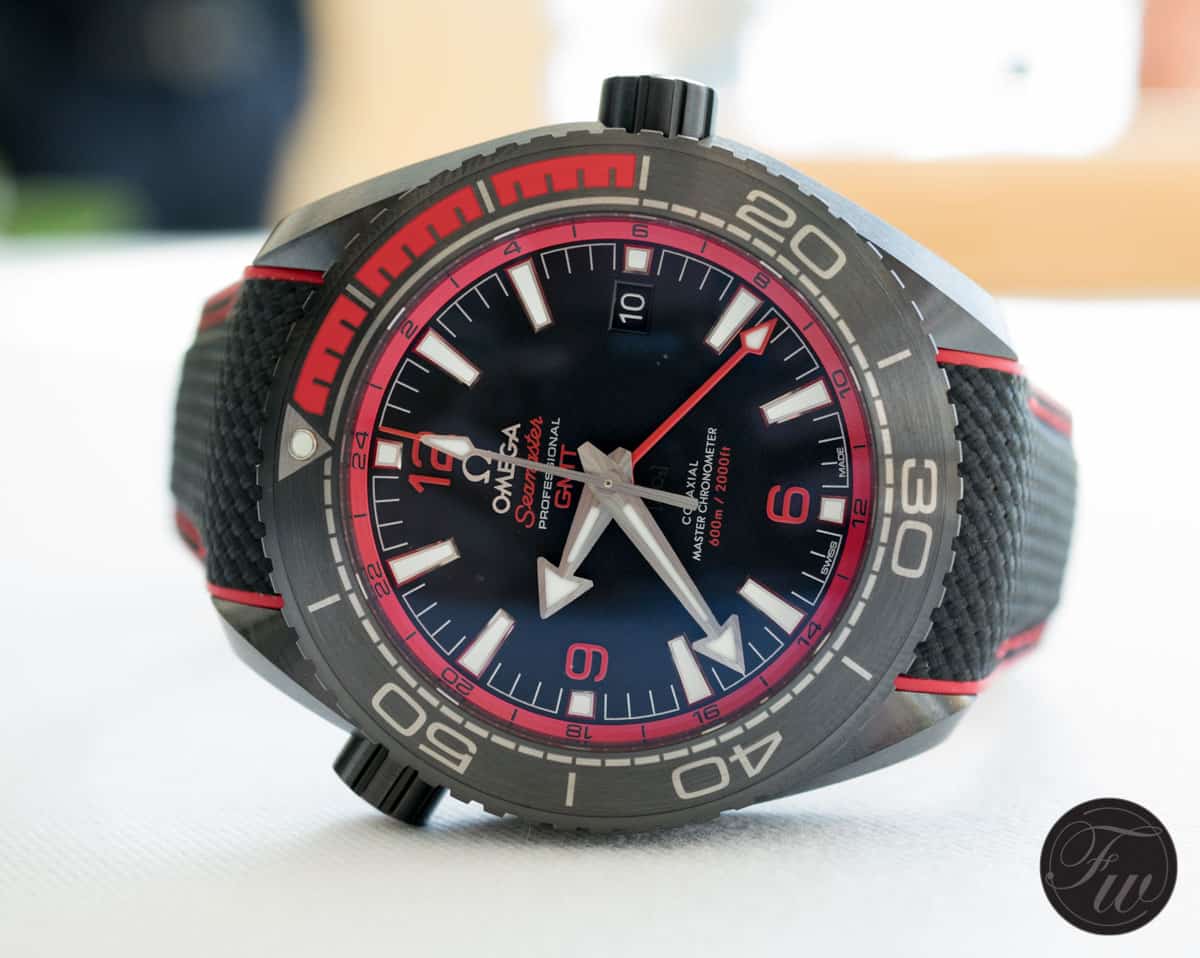 For the caseback, Omega used the Naiad lock (did you notice the Naiad technology for the crown of the Seamaster 300 CK2913?) to make sure the engraved wording is perfectly positioned. The alveol design of the caseback also offers an aesthetic wave pattern.

As can be seen below, the movement of the Omega Seamaster Planet Ocean Deep Black is the in-house manufactured caliber 8906, officially certified by METAS. This means it can withstand magnetic fields of 15,000 gauss and is accurate within 0-5 seconds a day on average. Omega used the wording ‘Master Chronometer’ to indicate the METAS certified chronometer movement. Furthermore, the caliber 8906 also has a GMT complication. 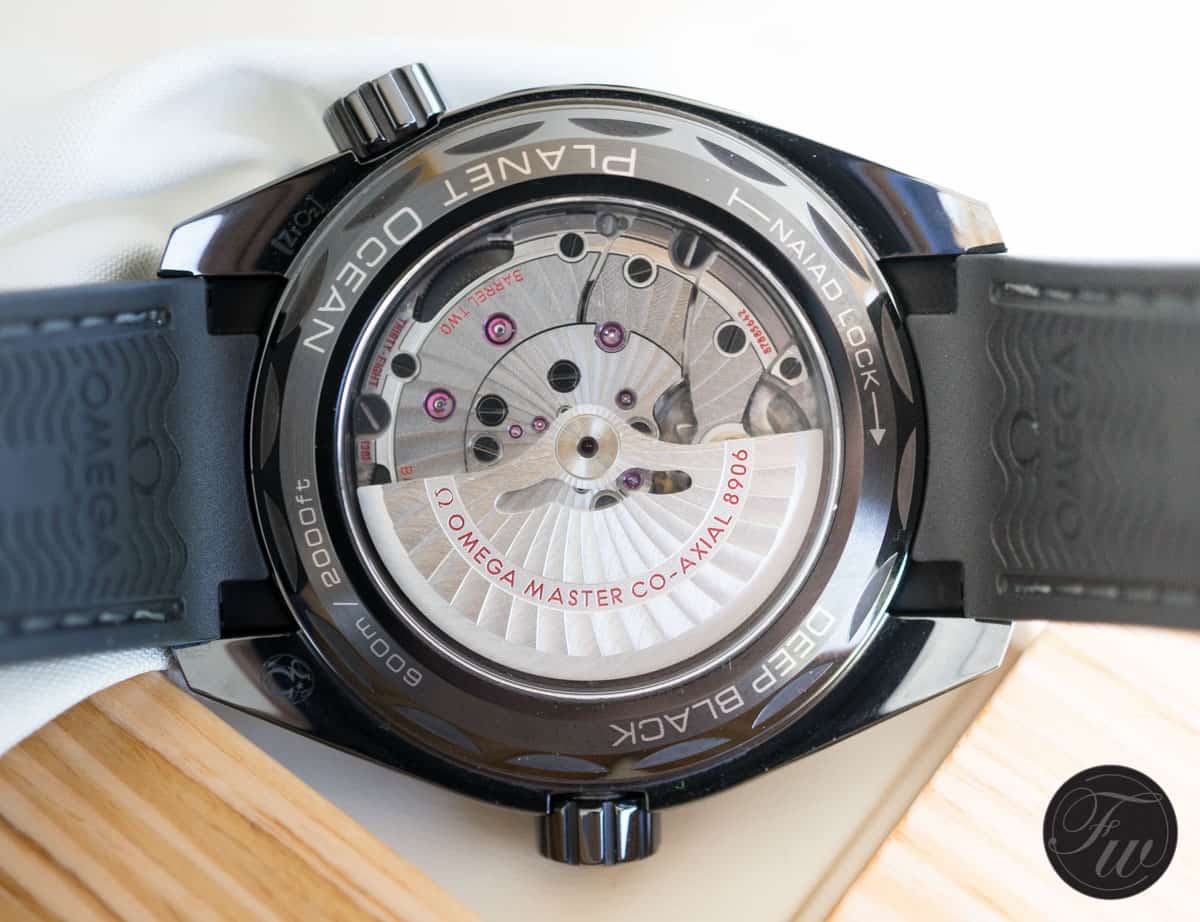 On the dial side, the hands and indices are created from either 18 carat white gold or 18 carat Sedna gold and have been coated with Super-LumiNova that will luminate in blue and green. 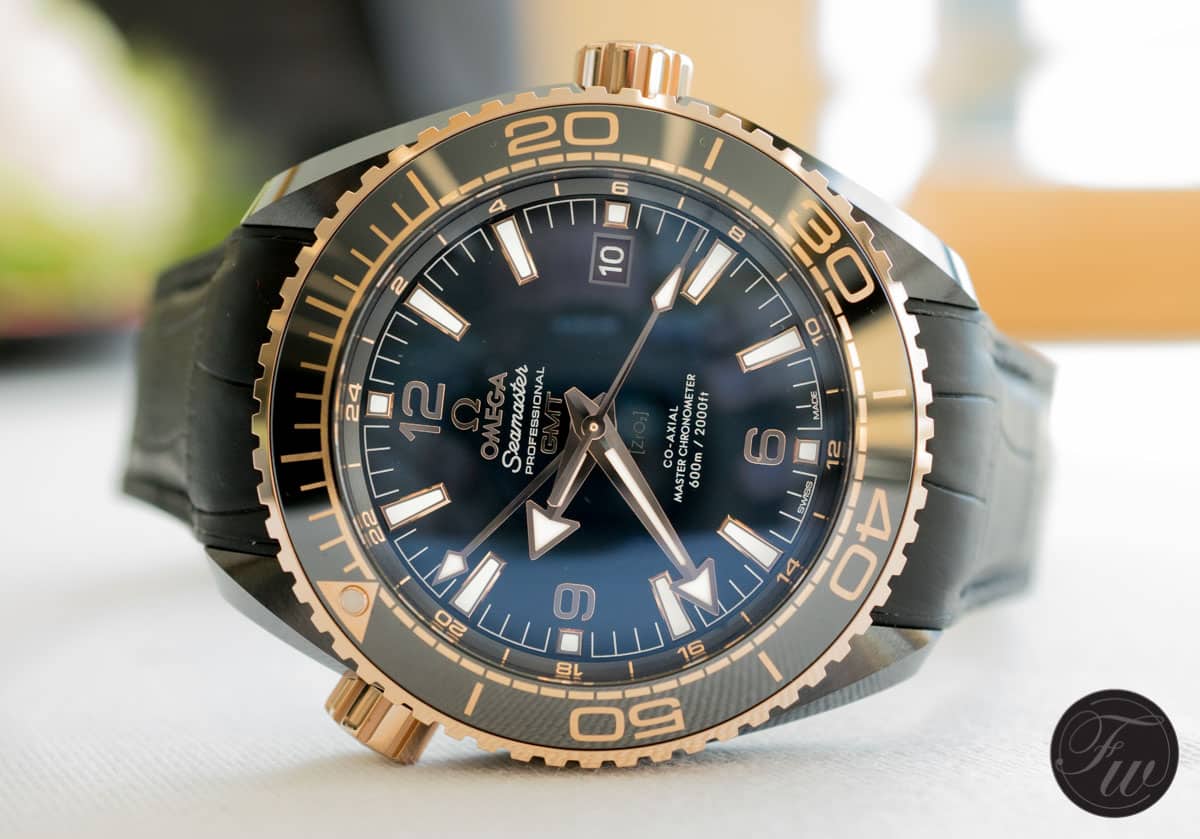 I had the opportunity last week to have a look at the new Omega Seamaster Planet Ocean Deep Black models in the flesh, and although I am mainly a Speedmaster guy, I was smitten by the all black model. Although the red and blue colored versions are very nice as well, and the Sedna gold version would bling-up my life a bit, the all black version is the one to have in my book. Just like the Dark Side of the Moon watch, its dark appearance looks awesome in the flesh and there are no distractions from other colors or materials.

On the dial you will find an inner-scale (24 hour) for the GMT hand and an extra hour hand with small orange arrow-shaped indicator. It is totally different from the broad arrow hands for hours and minutes, or the orange tipped second hand, so you won’t mix them up. The dial indicates that is a Master Chronometer and has the Co-Axial escapement as well. In orange, you will find the Seamaster logo, GMT indication and the water resistance specifications. Large tapering indexes are used for the hours as well as 3 big Arabic numerals. 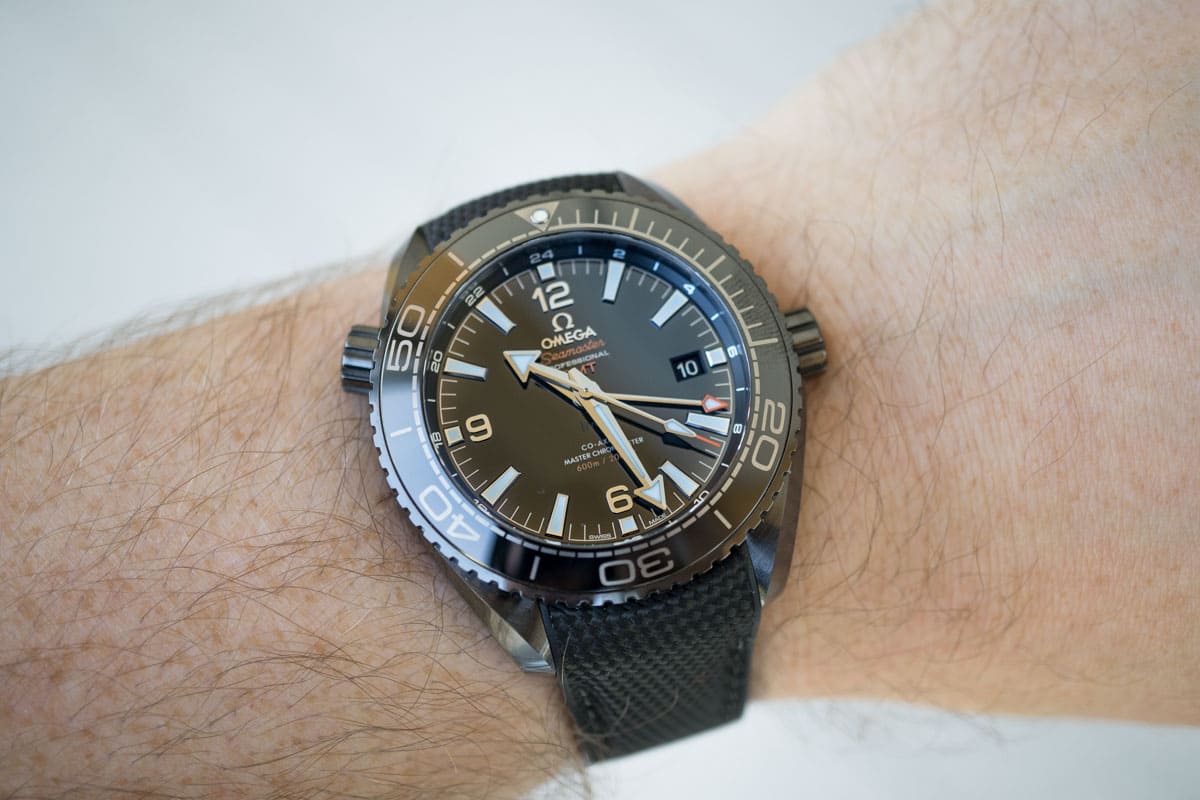 The 45.5mm ceramic case is big, but it does seem to wear a tad bit smaller. The case shape of the Seamaster Planet Ocean is quite elegant with its curvy lugs, but do not under estimate the thickness of the watch. It is a whopping 17.8mm. 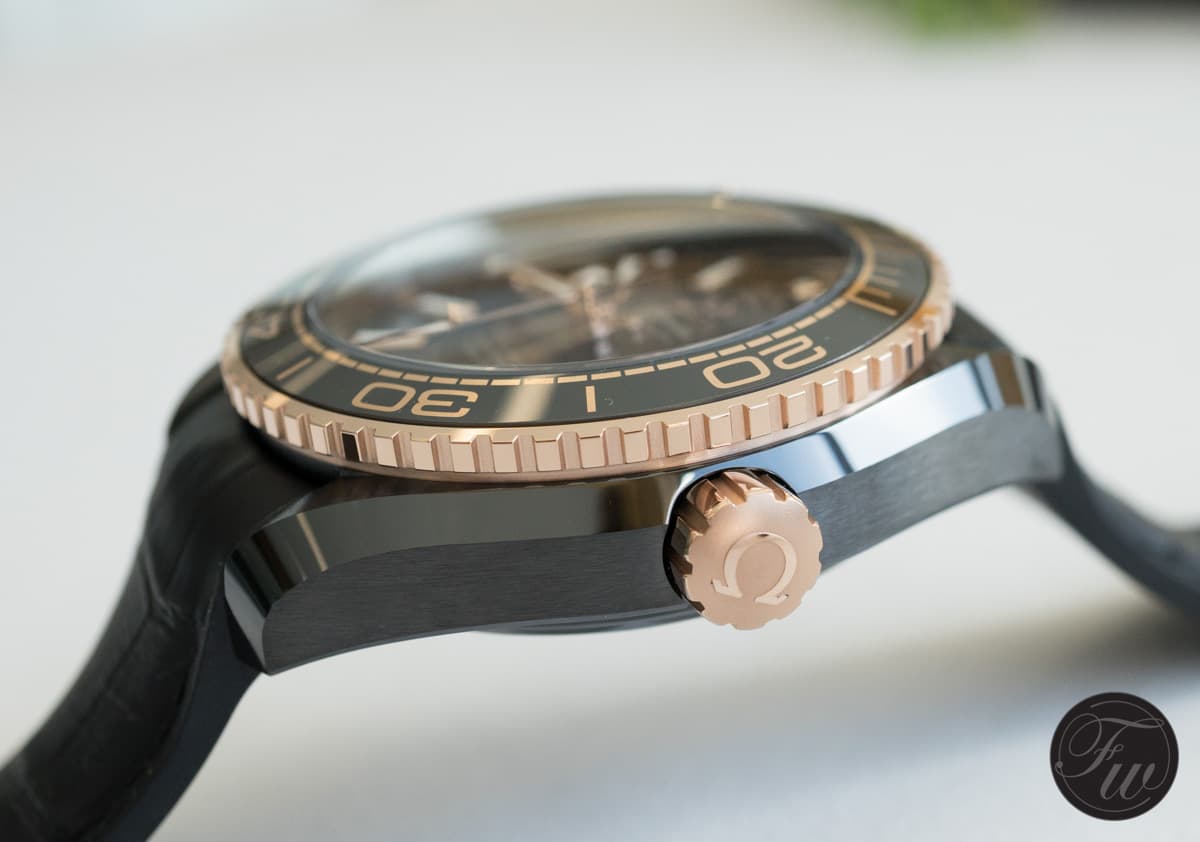 As I’ve said, the Sedna gold version adds some bling to the game, which isn’t for everyone I guess. I think I would get away with it though, especially in the evenings it would look great when it catches those last rays of the Sun. 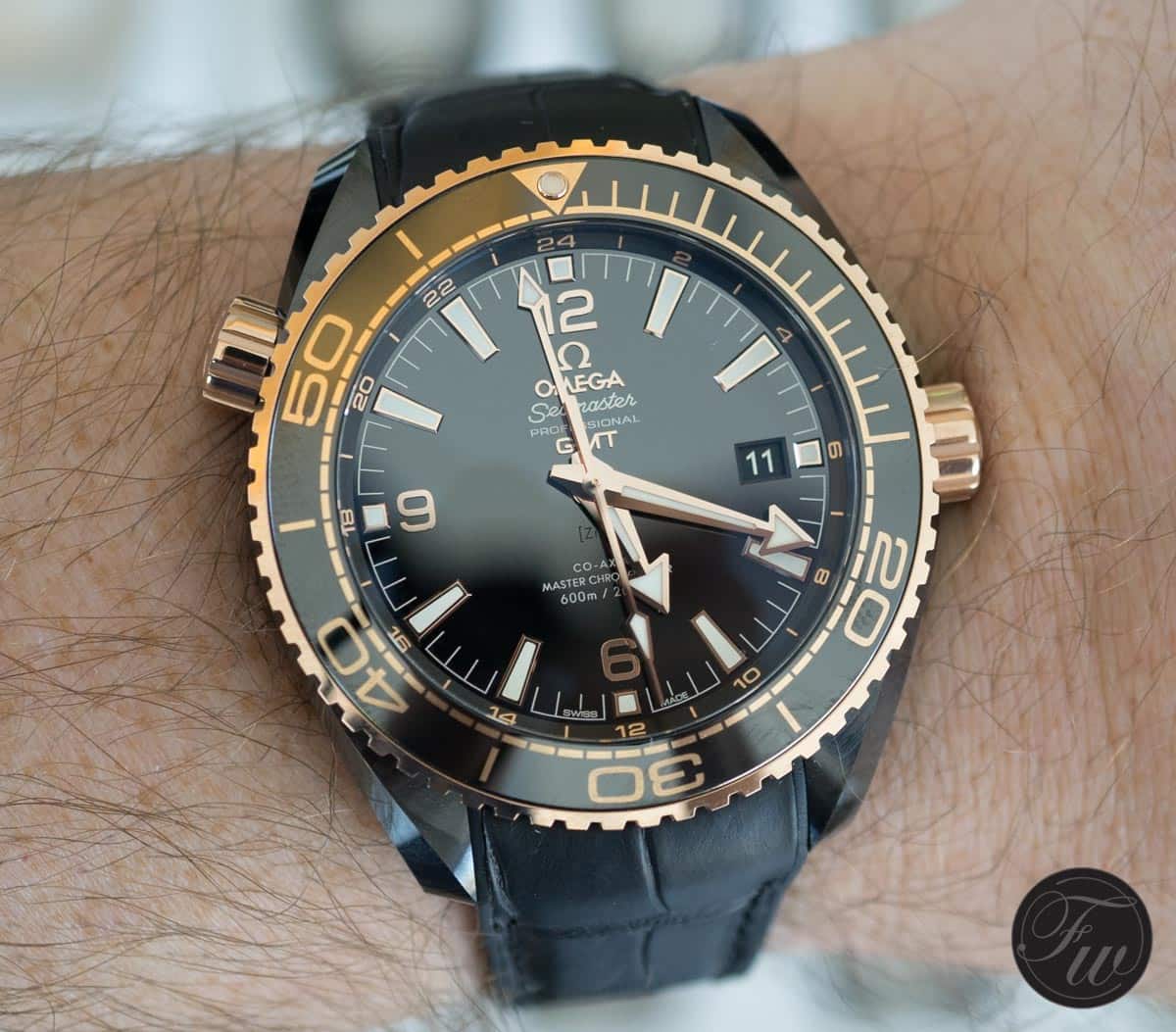 So what is with the colors on these Omega Seamaster Planet Ocean Deep Black models? Red is the first color that will disappear under water, at 5 meters to be precise. Omega claims that this ‘military spec’ will ensure the watch goes ‘camouflage’ from 5 meters onwards. The blue version is also interesting. Blue is the last color you will see under water, at a depth of 275 meters. The exact shade of blue you will see at 275 meters, is the color used on the Omega Seamaster Planet Ocean Deep Black with blue accents. At 300 meters depth, everything turns black. The Sedna gold model, of course, can be used for diving without a problem, but the gold is mainly there to enjoy at the deck of your Riva. 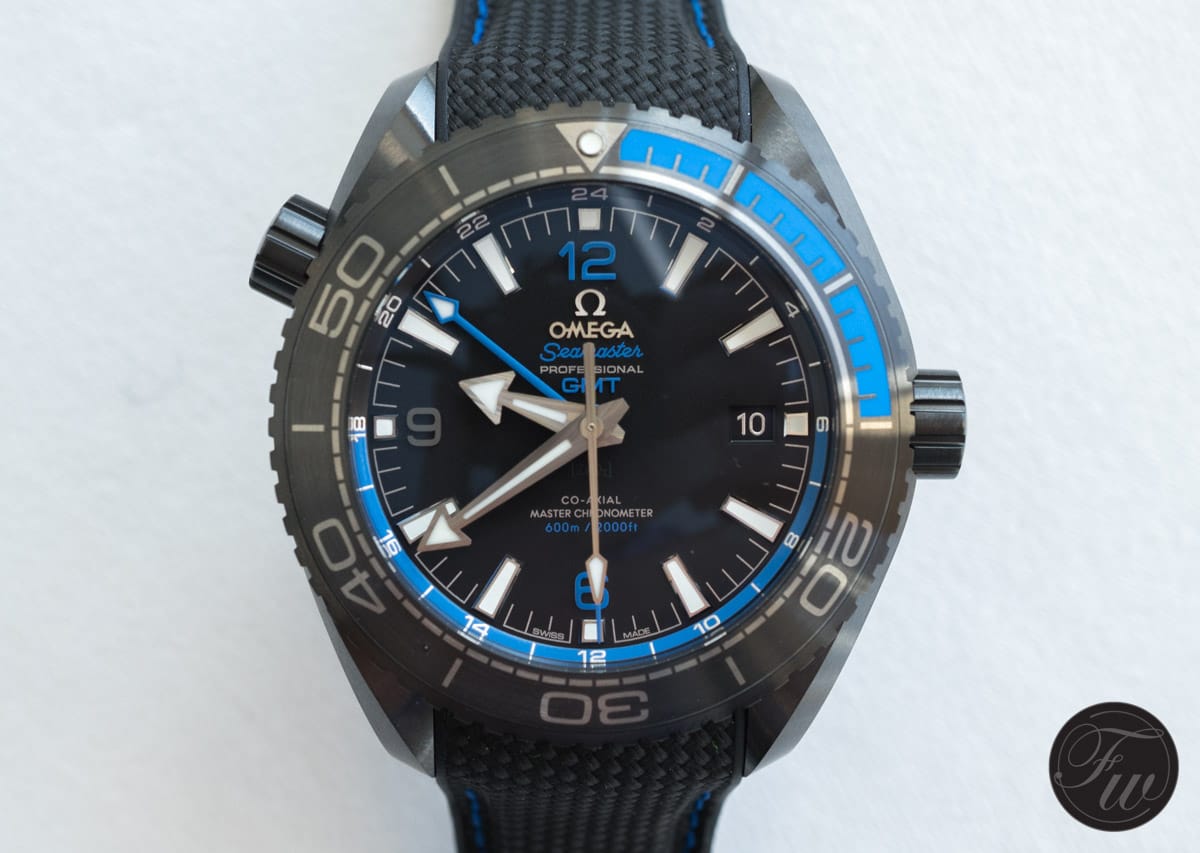 I am not a diver by any means, so I would buy this watch just because of its awesome appearance and well, let’s face it, the fact that it CAN be used as a professional divers watch. Just like my trusty old 1996 Seamaster 300M Chronograph that has become my favorite watch for the holidays (swimming pool use).

As I’ve said before, I am more or less a Speedmaster guy, but this new Omega Seamaster Planet Ocean Deep Black is a watch that I could very well buy myself in the future for daily use (and holidays that feature a swimming pool). The GMT hand make it a great travel companion and as I don’t like to travel with too many watches in my suitcase or bag, the fact that it is water resistant make it a watch you don’t have to take off or leave behind in your hotel room locker. 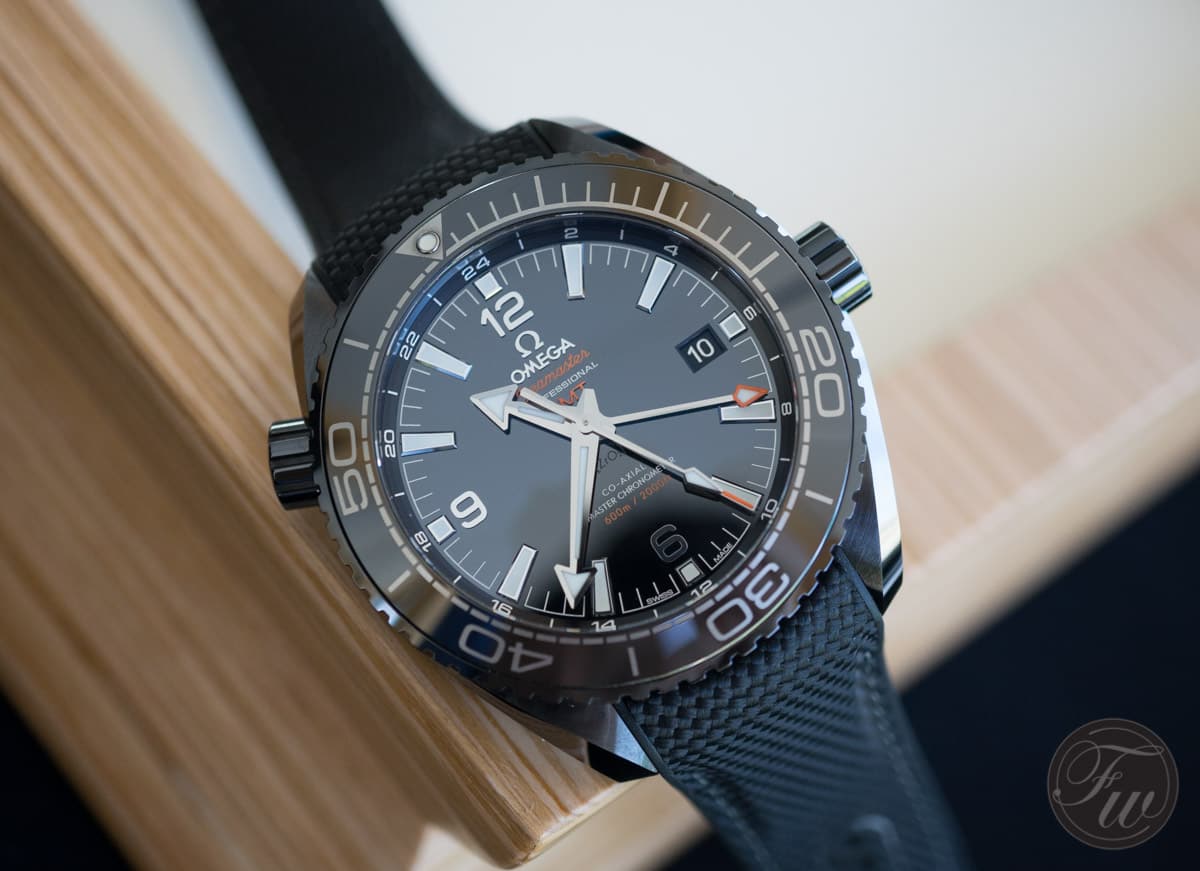 The straps are treated with anti-bacterial coating, for special use under water. Even the leather straps are water-resistant. On the Sedna gold model, the strap is water-resistant leather, with the same anti-bacterial rubber underside. The foldover clasp is made from ceramised titanium, while the clasp cover has been produced in ceramic with two types of finishing. 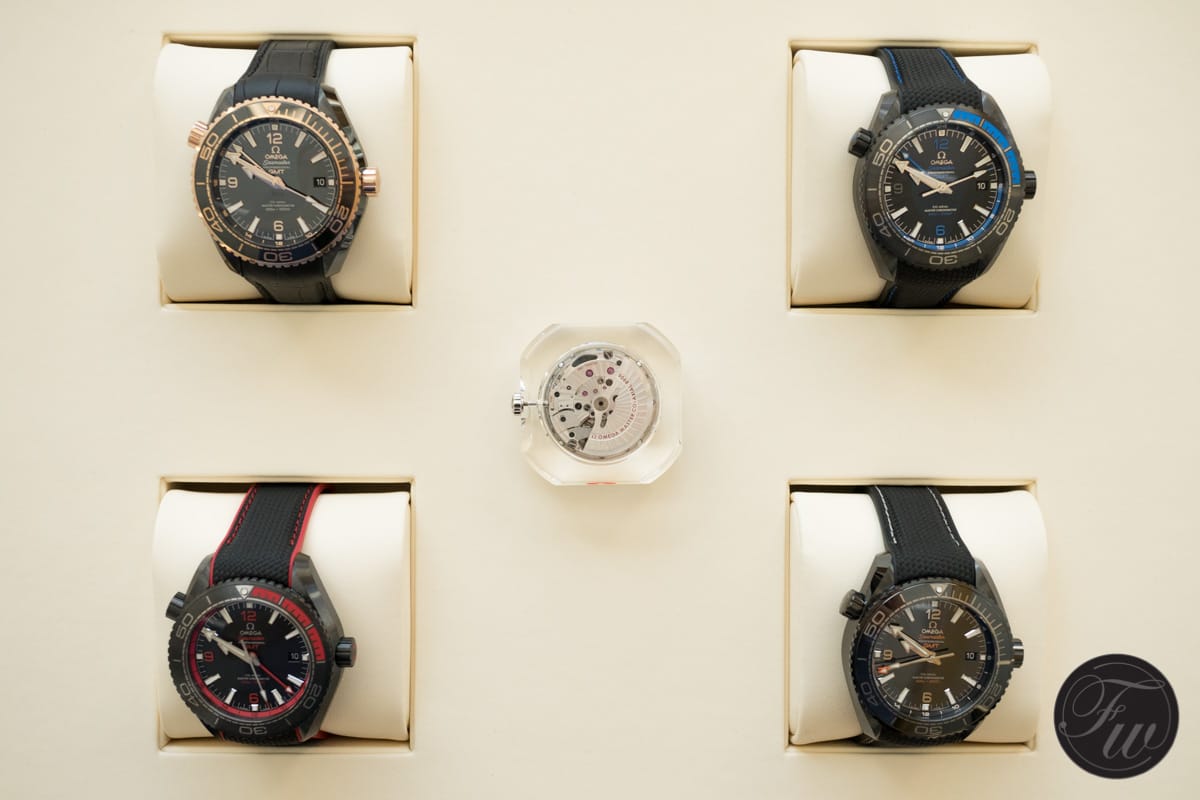 The Omega Seamaster Planet Ocean Deep Black will be available from October.