On May 24th, Breitling held an event to release the 60th-anniversary edition of the Navitimer Cosmonaute. But the brand also succeeded in making attendees completely forget to check their watches at a watch event. How did Breitling do it? Read on to find out.

“The silver spacesuit was the coolest of all the suits,” says Scott Kelly, a veteran of four space flights, while anchoring a panel discussion with six other guests before the reveal of Scott Carpenter’s watch. Looking at a gigantic picture of Carpenter fully suited-up for his mission, you feel the same way. At the time when Carpenter became the second astronaut to orbit Earth on May 24th, 1962 wearing a freshly delivered Navitimer Cosmonaute on his wrist, neither the current Breitling CEO Georges Kern nor Scott Kelly had even been born yet. Kris Stoever, Carpenter’s daughter and historian, was six years old at that time. 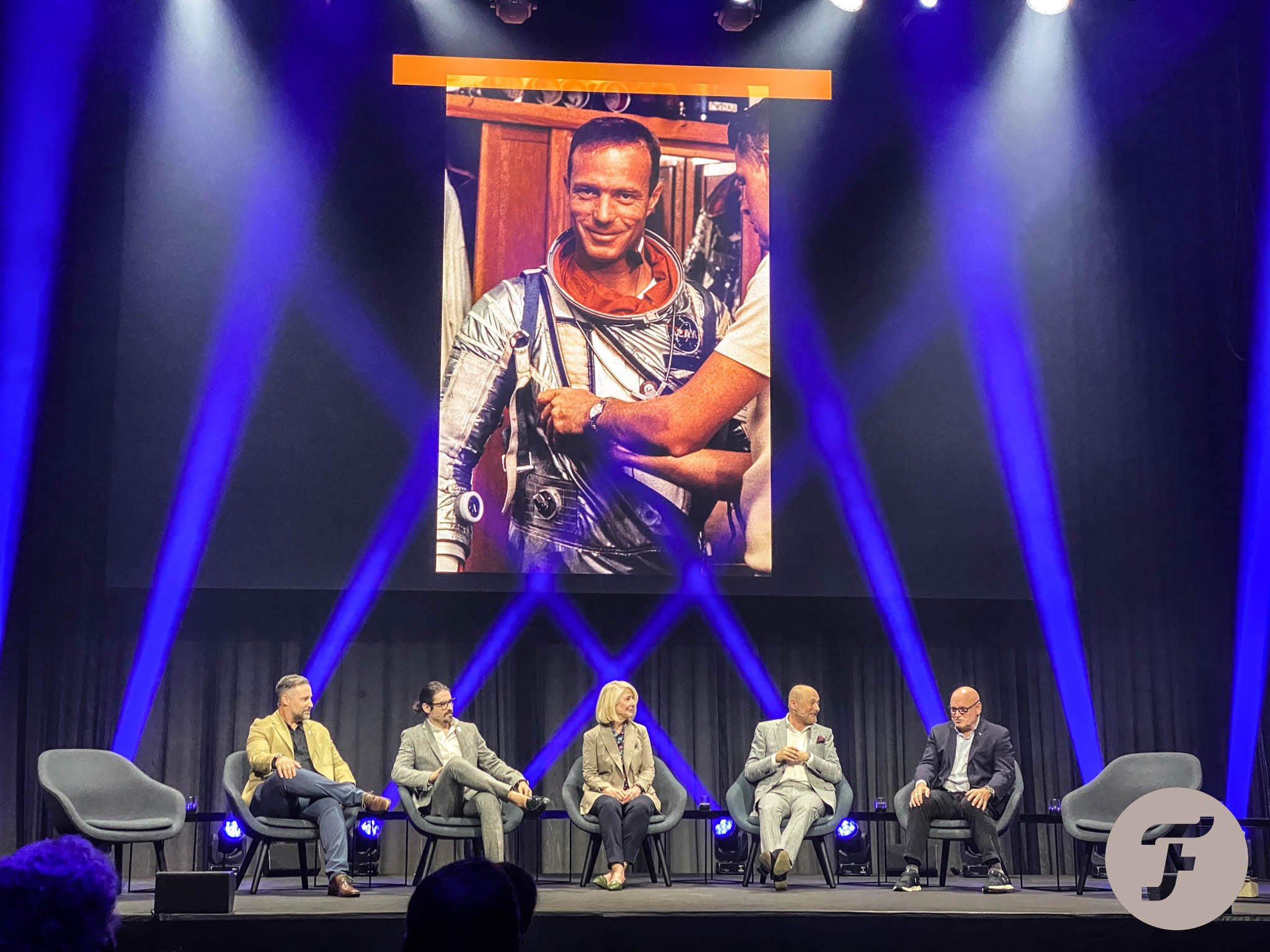 “Imagine sitting there, you don’t know where you’re going. But you are sure you are not coming back to Florida.” The way Stoever commented on one of the many archive recordings of Carpenter heading to the sky was so captivating, I completely forgot the entire world for the next 60 minutes.

When I go to a press event, I don’t expect to form lifelong memories. I just assume I’ll see a new watch. I am not particularly crazy about space history, so I slept soundly the nights before the event. It’s too soon to say whether I will remember the day forever, but I can say for sure that Tuesday’s event was really moving, resonant, and memorable. 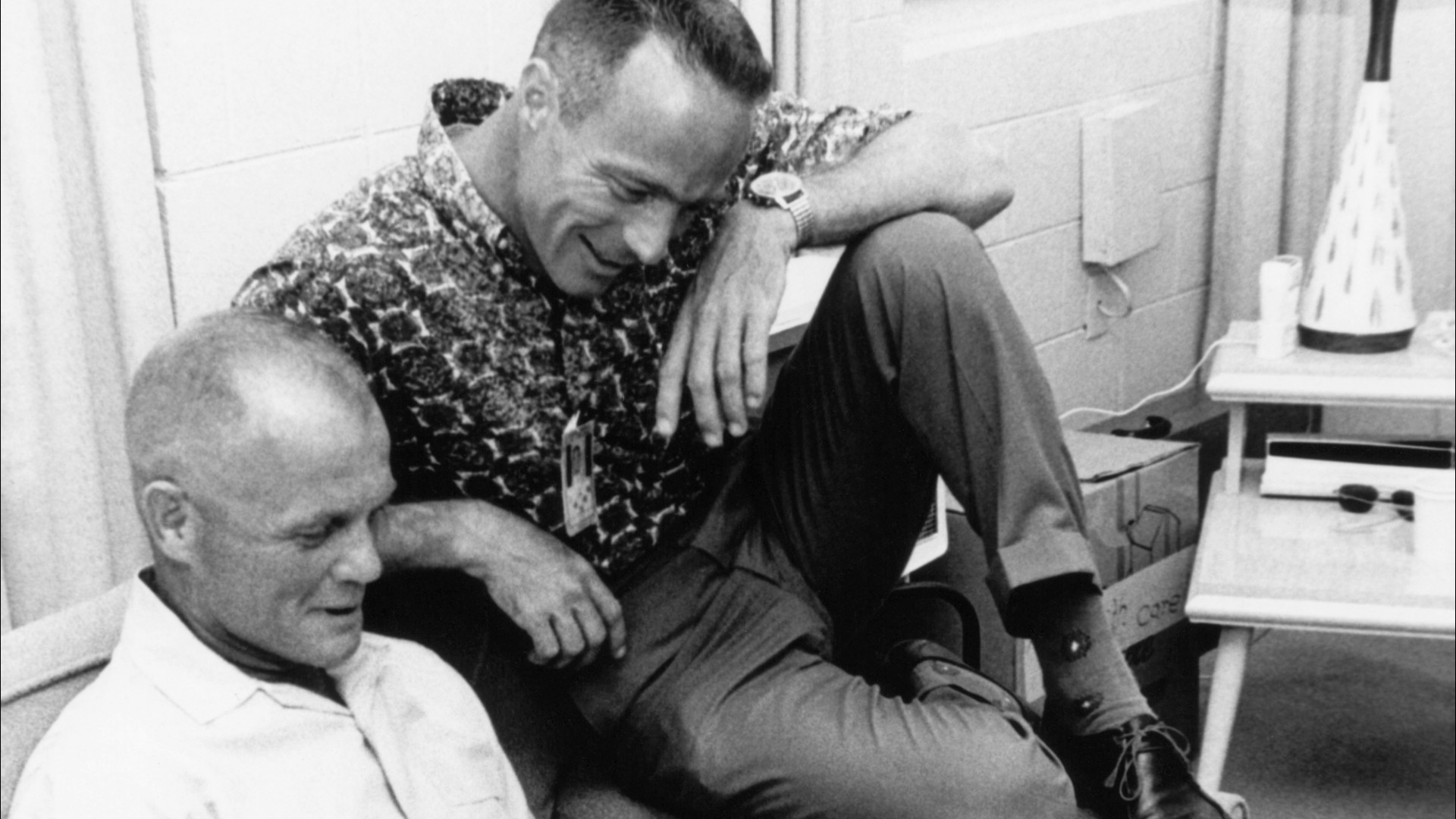 “I had the opportunity to meet Scott Carpenter at a dinner with the Mercury Seven astronauts. Scott wore a turtleneck, and he was the coolest of all of them,” said Scott Kelly, half-jokingly. At some point, Gregory Breitling pulled out a futuristic Sputnik-shaped desk clock and animatedly retold the story of how he and his father were listening to Sputnik beeping from outer space. To sit in a room with the son of Willy Breitling and listen to him remember his father storming the room, passionately relaying space news to his kids… That’s probably the closest contact you can have with the authentic and original Breitling spirit and genius. 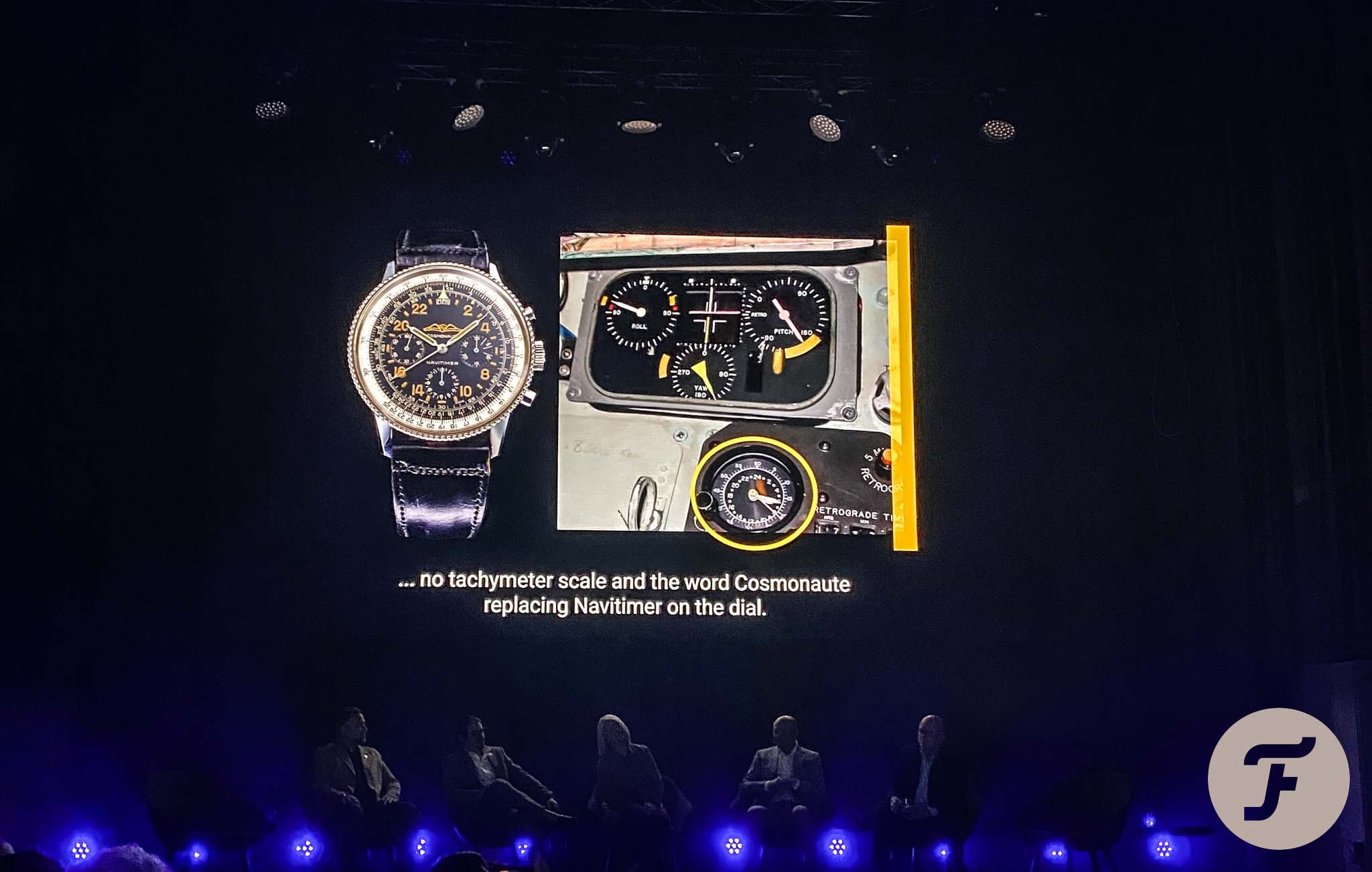 “We are going to design a special watch. A very special watch. A PRO-TO-TYPE. A watch that goes to space. They have lots of requests and we have to deliver it on time!” Gregory Breitling is almost shouting. I feel like I am there in the room with an ecstatic Willy Breitling who was fascinated by the space programs. All this was exciting and a fascinating part of history that helped to build Breitling’s watch empire. None of it would’ve happened, however, without Scott Carpenter. At that time, NASA had no official watches. As such, Carpenter had the freedom to choose the watch he wore to space. He saw the Breitling Navitimer for the first time in Perth when he flew with the Royal Australian Air Force. “He was smitten,” says Stoever. 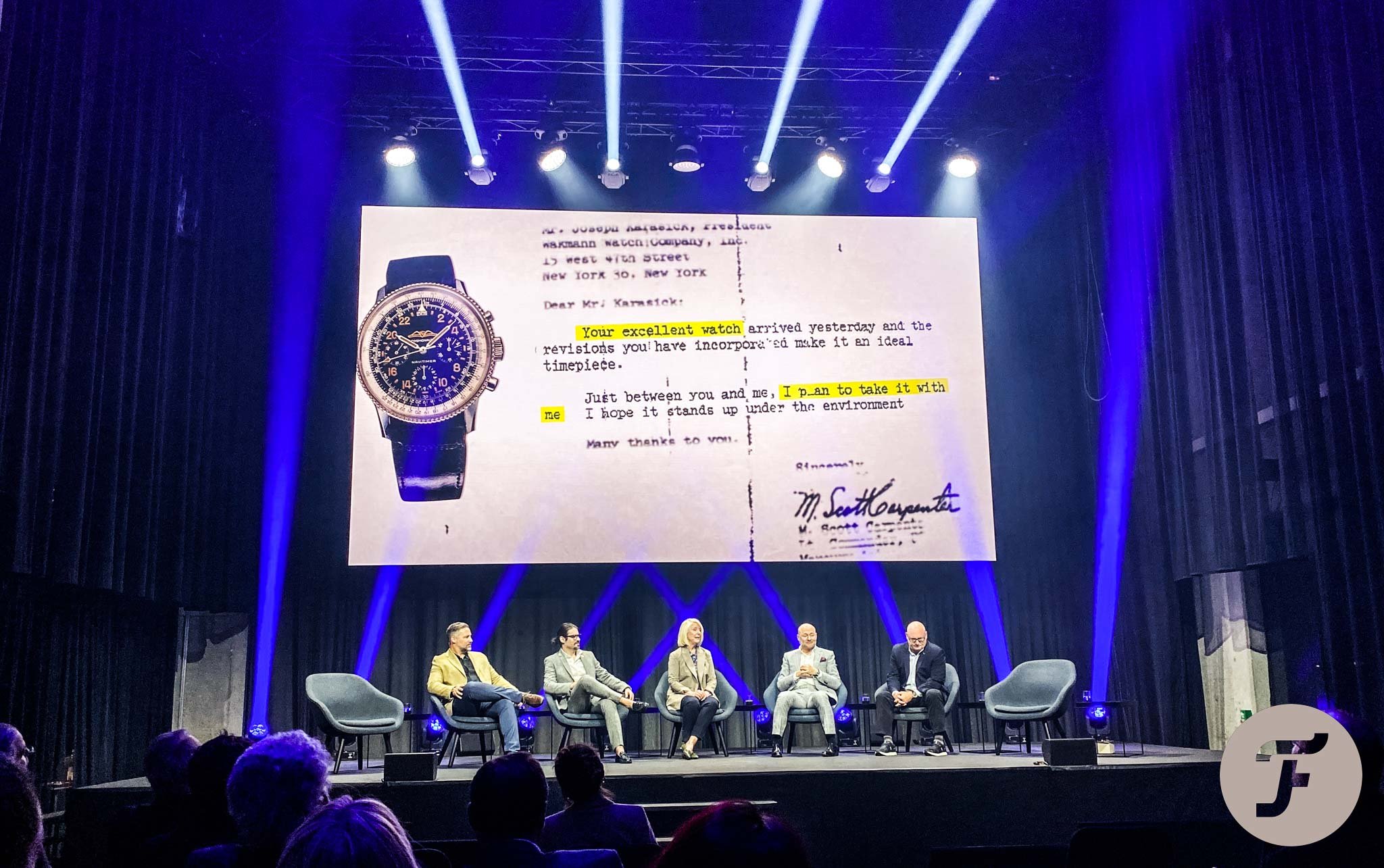 But a stock Navitimer was not good enough for Carpenter. “My father, he was always tinkering with things,” says Stoever, helping us to understand her father’s creative mind. Carpenter asked Willy Breitling for a Navitimer with four major modifications — a 24-hour dial, a simplified slide rule, a wider bezel for a better grip, and a stretchy metal bracelet to wear over his spacesuit. Willy Breitling didn’t let him down. He delivered the watch just five days before the start of the mission. Scott Carpenter didn’t let Breitling down either. He took the custom watch with him to space.

We all know what happened next. Due to a mechanical glitch, Carpenter “overshot” the planned landing area by almost 500 kilometers. He was on a raft on his own on the open sea for 39 minutes until they located him. Before the frogman jumped out of the heli and shared his candy bar with an exhausted Carpenter, the watch on his wrist had enough time to flood completely with saltwater. 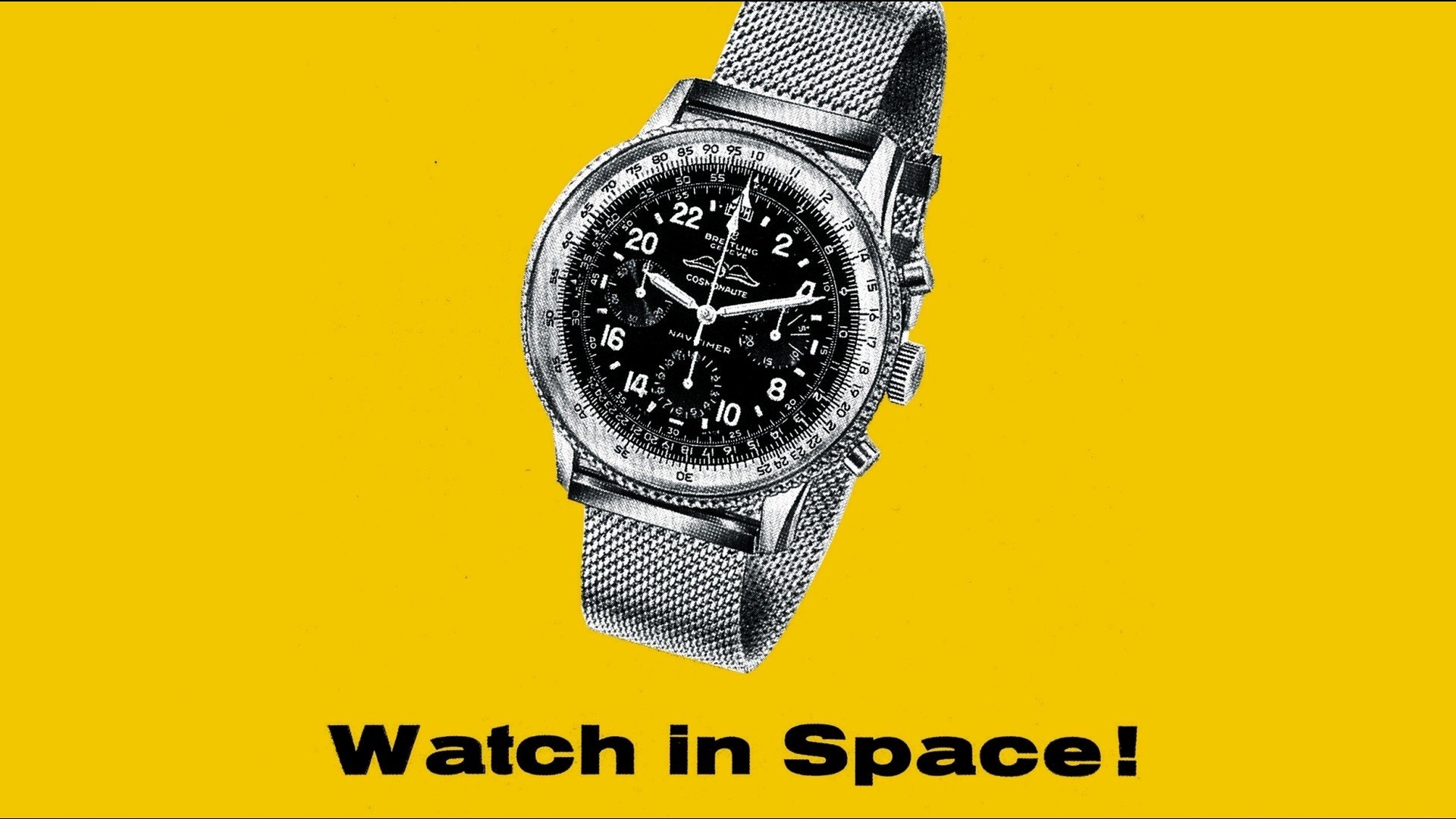 Gone from view, but not gone for good

The public didn’t care much about the post-mission condition of Scott Carpenter’s watch. But Carpenter himself certainly did. As it needed “a bit” of attention, he sent it back to Breitling and got back a new one. For decades, devoted space watch fans and hunters of space-flight memorabilia couldn’t figure out what had actually happened to Carpenter’s original watch. On Tuesday, Gregory Breitling finally put an end to all the forum discussions about the watch’s fate with another moving memory. 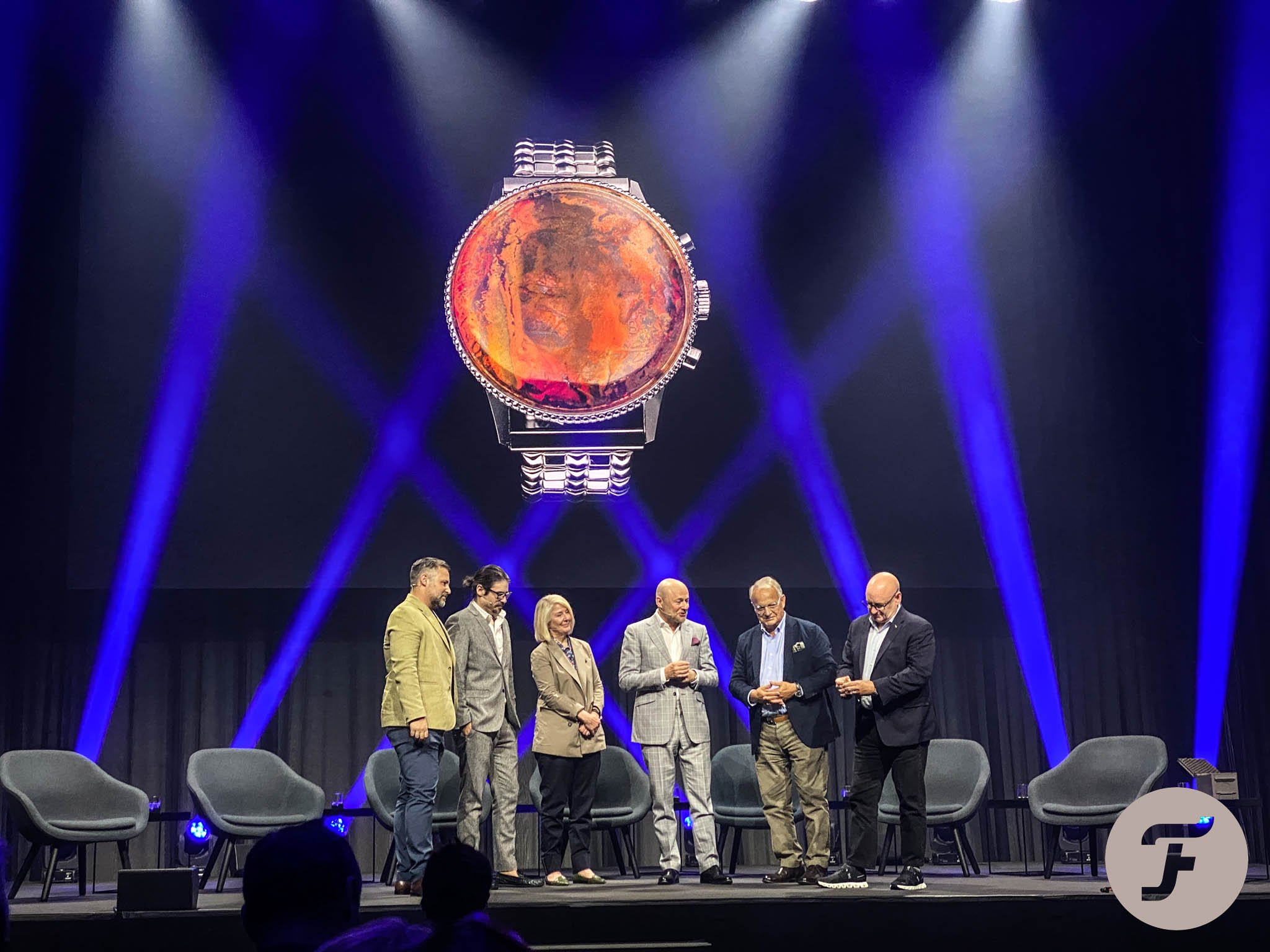 “In the summer following the mission, our father told us during lunchtime that he had some incredible news to tell us. He took [Carpenter’s] watch out and said, ‘That is, kids, the first time Breitling went to space.'” The reaction of a young and confused Gregory Breitling was sweet. “But Papa, look, it’s damaged!” Willy Breitling had his response ready. “It is the vacuum of space that made it look so special.” Willy kindly declined suggestions from the young Gregory to restore the watch. “We have plenty of time to restore it,” he said. Thankfully, Breitling never did. When I spoke to Gregory after the panel discussion in person, he said that they first opened Carpenter’s watch in early 2000.

With my background and experience in advertising, I can tell you how difficult it is to organize an unforgettable event. It’s not only about the lineup of speakers but also the venue selection and the budget for visual effects. Well, the first-ever public showing of Scott Carpenter’s watch lost for more than half a century was mind-boggling. 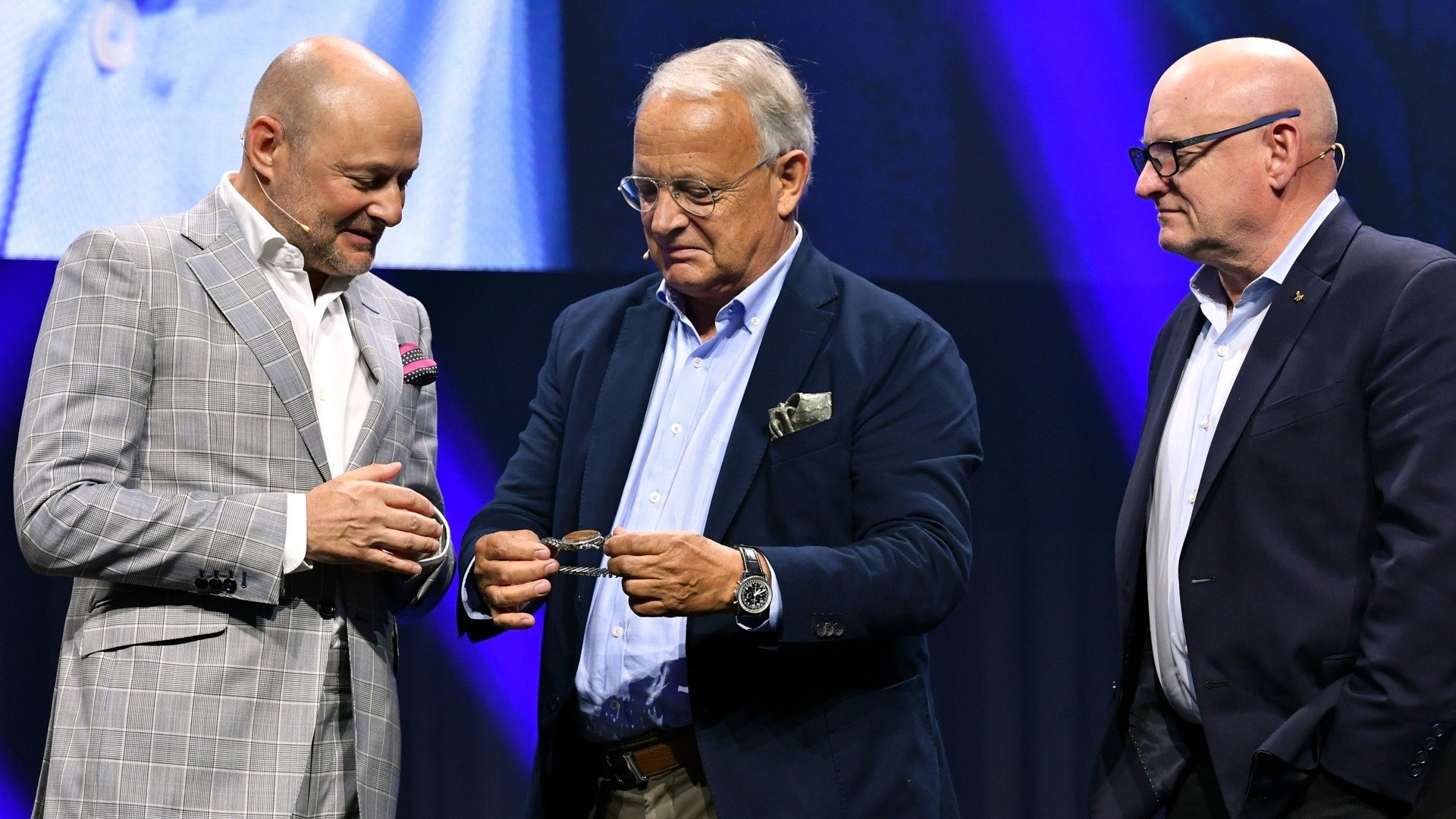 As I repeatedly recall fragments of Tuesday’s event, I see that Breitling achieved something unique. Kelly’s unbelievably authentic and almost indifferent way of talking allowed the hard facts from the mission to blend seamlessly with very personal and sometimes intimate memories in such a unique way. So much so, in fact, that many attendees said it was one of the best watch presentations in years.

Honestly, it was unique to watch three of Scott Carpenter’s children and Willy Breitling’s son Gregory discussing their great fathers and how they reflect on these monumental events. What made it even more special were a few unexpected anecdotes that each of them pulled out here and there. The speakers were happy to be there and the discussion felt natural, not scripted (even though it probably was).

Scott Kelly, his almost comedic talent, and glossary accuracy often punctuated the important message without much talking. Attentive eyes and ears could see proof of Breitling’s flexibility and the brand’s vision of perfection when organizing this event. 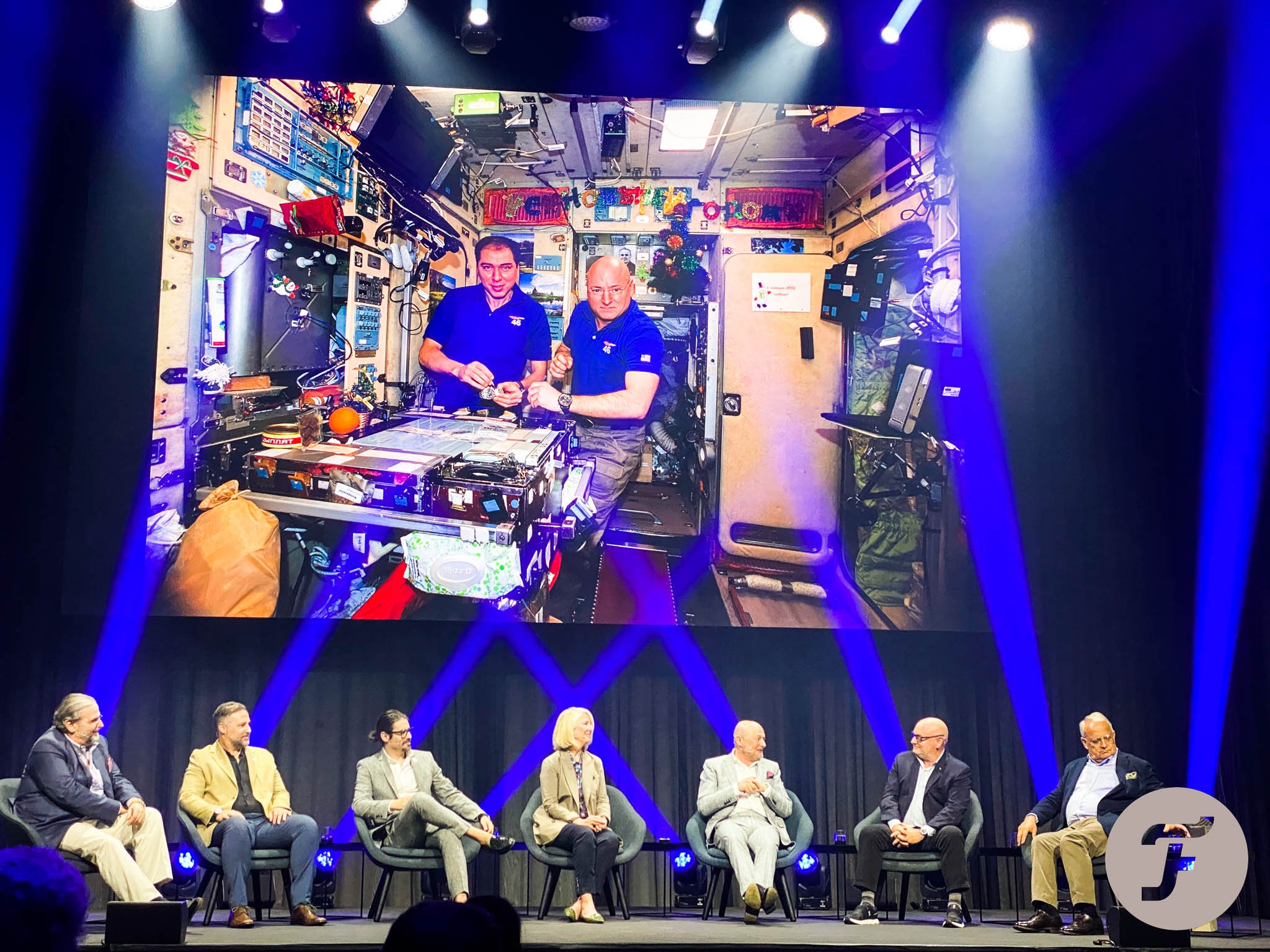 The picture above was slipped in literally hours before the real kick-off. “You know, it was interesting to meet a cosmonaut wearing a Cosmonaute,” Kelly jokes and also explains why his twin brother Mark and Russian cosmonaut Sergey Volkov are hovering over a Breitling repair kit on the International Space Station. “Sergey’s Breitling must have gotten caught on one of the countless hooks in the space station.” The bracelet broke and they needed replacement bars to fix it. Shipping an emergency kit to space to get the watch back on the wrist of a cosmonaut was probably one of few literally stellar customer services ever provided.

The key panel was followed by a short Q&A from the audience. If you know some bizarre pieces in my collection, you won’t be surprised which question I enjoyed the most. Someone asked Scott Kelly, the astronaut who was on a year-long mission on the ISS, what his ultimate “Cosmonaute” watch would look like. “I was actually writing notes on it, and I believe I eventually gave it to you, right?” said Kelly looking at Kern, who nodded. According to Kelly, it would have a really loud alarm because there are lots of different noises on the ISS. It should also have an emergency light and multiple timers because you always need to time something. Kelly added, “And it should have multiple timezones, as it’s good to know what time it is at home when you are calling there.” 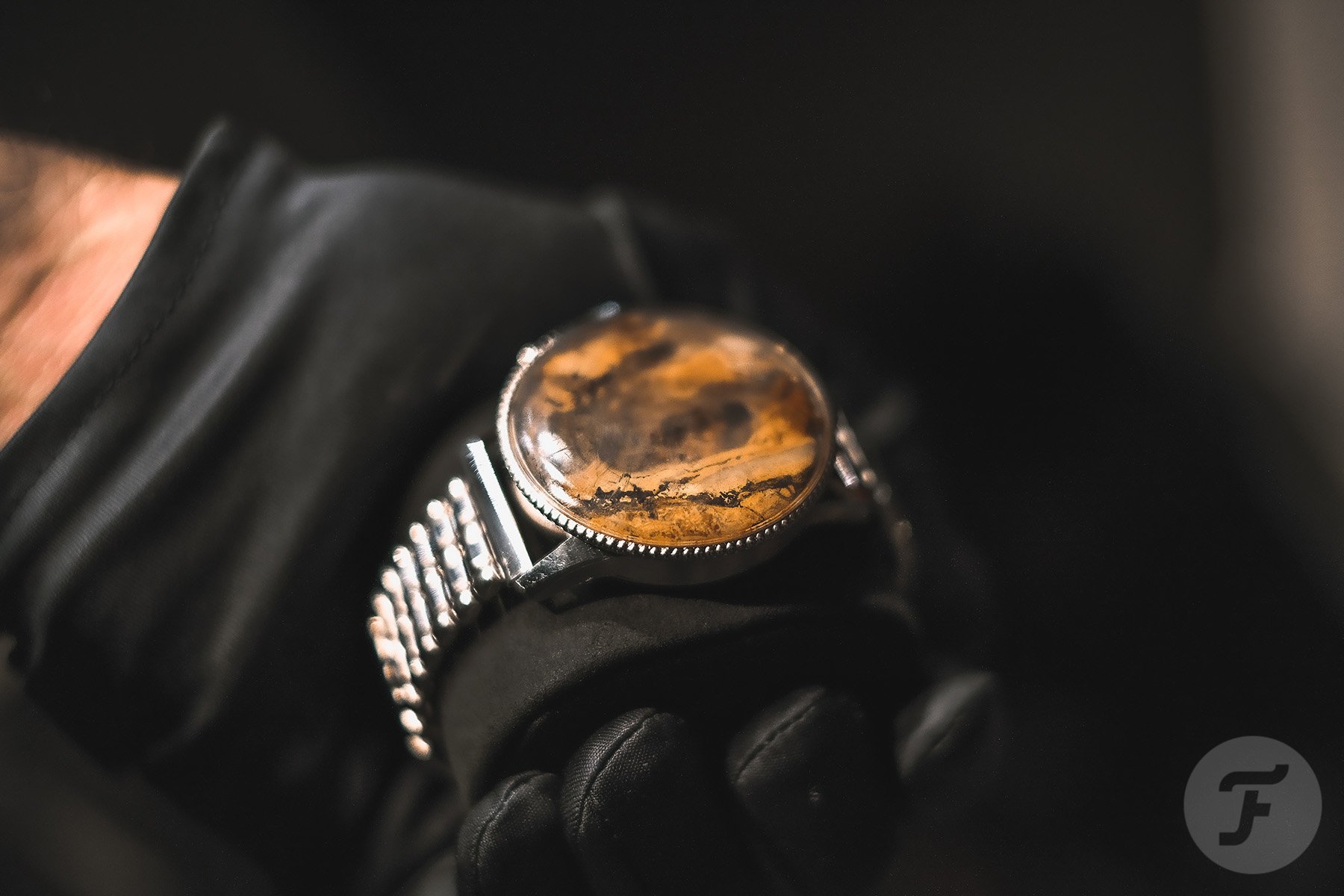 Kern says it’s a challenging request to combine multiple analog and digital requirements. Six decades ago, Carpenter wanted a simplified slide rule on his Breitling that could help him figure out where he was if things went south. Carpenter was sent to space for five hours to make three orbits of Earth and to find out if humans could digest solid food in space. Kelly was in space for a year and he ordered a Breitling emergency repair kit from there. I hope Willy Breitling watched Tuesday’s event from somewhere high above with a pleased, ear-to-ear smile under his ‘stache.

If you are interested in reading the first impressions of the newly released limited-edition Navitimer Cosmonaute, you should definitely check out Ben’s article. If you would like to understand Carpenter’s mission and the Cosmonaute’s development in greater detail, our friend Jeff Stein published a complex but interesting read on Hodinkee. And if you would like to hear it from the people who lived it from the front seats, we recommend you to pick up Scott Carpenter and Kris Stoever’s book, For Spacious Skies.