In March 1962, Mercury Seven astronaut Scott Carpenter requested revered pilot-watch maker Breitling to develop a watch capable of space flight. The requirements were a 24-hour dial display and a more pronounced bezel for operation with gloves. A few days before the triple-orbit Mercury-Atlas 7 flight, Breitling delivered the watch to Carpenter for use onboard Aurora 7. Despite the success of the primary objectives, re-entry was compromised, and Carpenter’s capsule was 400km adrift from the target. Carpenter struggled to keep himself and the capsule afloat for fifty-five minutes as rescue services scrambled to locate him. The watch saw irreparable damage with salt-water ingress beneath the crystal. Now, sixty years later, Breitling pays tribute to its stake as the first Swiss wristwatch in space. For 2022, Breitling unveils the new Navitimer Cosmonaute.

Unlike Bulova’s tenuous connection with NASA, which Robert-Jan explained, Breitling’s space-faring story is irrefutable. And while the reality of the mission isn’t all romantic, it adds to the rich tapestry of Breitling’s heritage. The Cosmonaute has seen many references throughout the generations, but by marking sixty years, Breitling is keen to cement its history and closely follow the original specifications. The new Navitimer Cosmonaute also uses a 24-hour dial. The in-house B02 movement, therefore, is geared for a full rotation of the hour hand every 24-hours. A mixture of indices and Arabic numerals is within the main dial. The three sub-dials break up the continuation of the digits in two-hour increments for the subsidiary seconds at 9 o’clock and the minute and hour chronograph totalizers. At the 6 o’clock position is the date window with a matching black background and white printing. 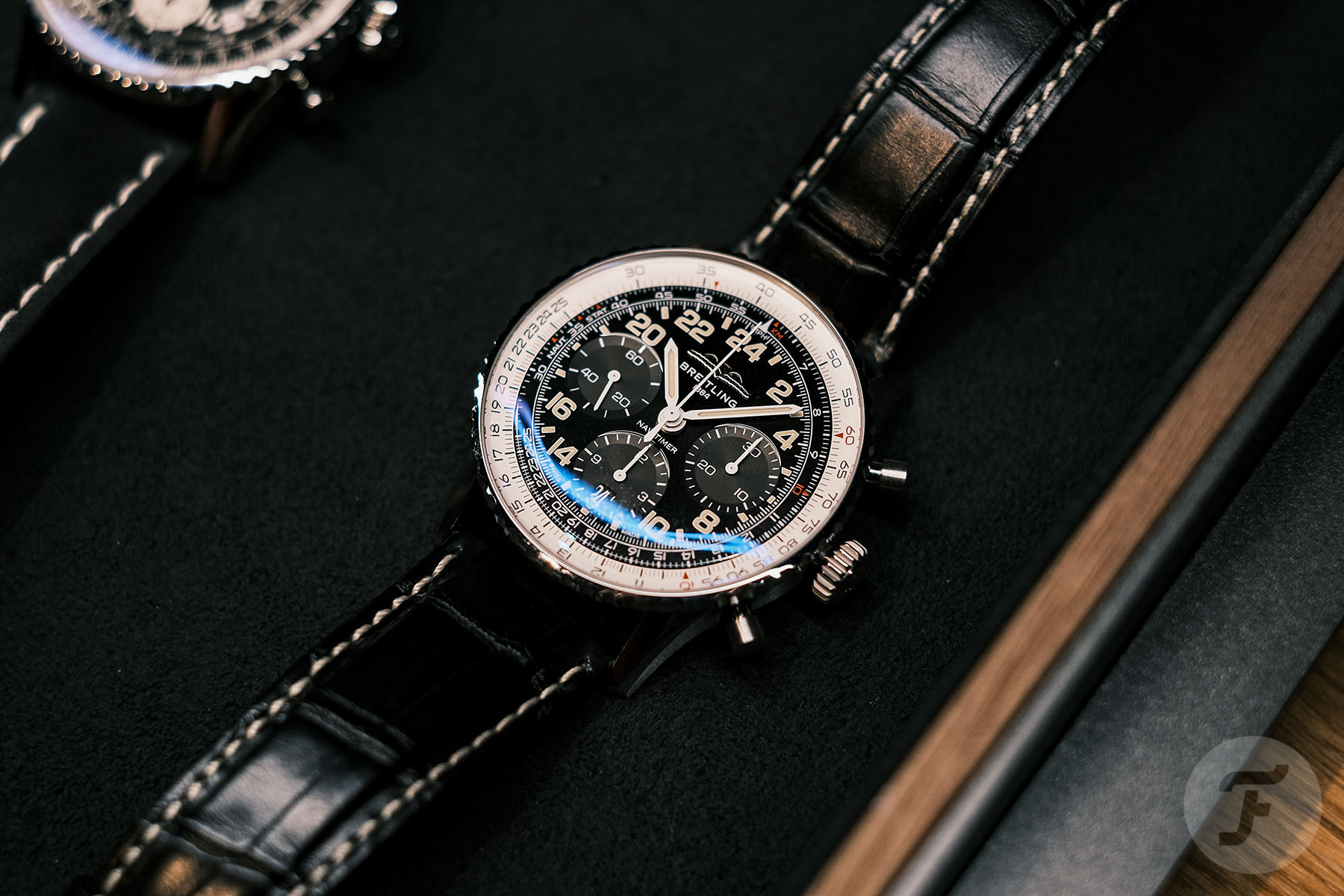 The date window is a contentious addition to the watch. While some Cosmonaute references included the date window, most frequently at 4:30, the original Scott Carpenter Cosmonaute did not. This could be a deal-breaker for some, but the new Cosmonaute is not a 1:1 recreation à la the Ref. 806 or 765 AVI capsule collections. A little modernity is nothing terrible, after all. I find the 6 o’clock window placement within the hour totalizer sub-dial to be the least intrusive option. The hands and indices also have a vintage-hue luminosity to play on the heritage theme. The beige color also stands apart from the regular Navitimer, with its stark black and white contrast. 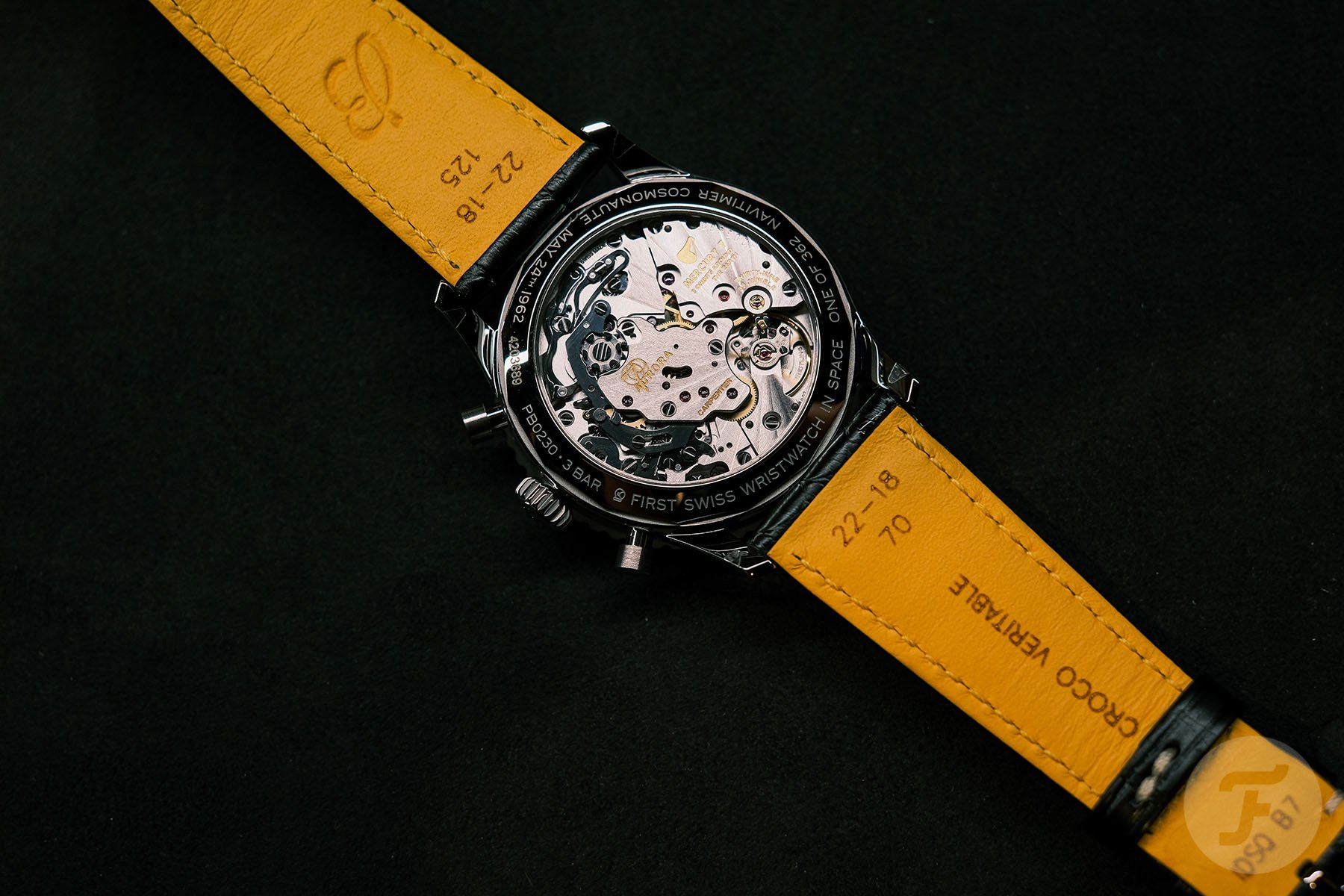 The tachymeter scale is absent from the Navitimer’s signature slide-rule bezel. While the original Navitimer references did not include the tachymeter, Carpenter also requested the removal of the logarithmic “C” scale. The logarithmic scale was redundant for space travel, reducing the clutter. As this new Cosmonaute takes inspiration from the original watch, it also honors Carpenter’s request to remove the scale and the tachymeter. However, I must note that the latest Navitimer range also does not include a tachymeter scale. Breitling perhaps intended to clean up the complex and claustrophobic slide-rule bezel before the Cosmonaute. Nevertheless, some did note the glaring omission of scale on the new Navi. Although, for the Cosmonaute and its history, it makes sense to maintain the relative clarity of the bezel. 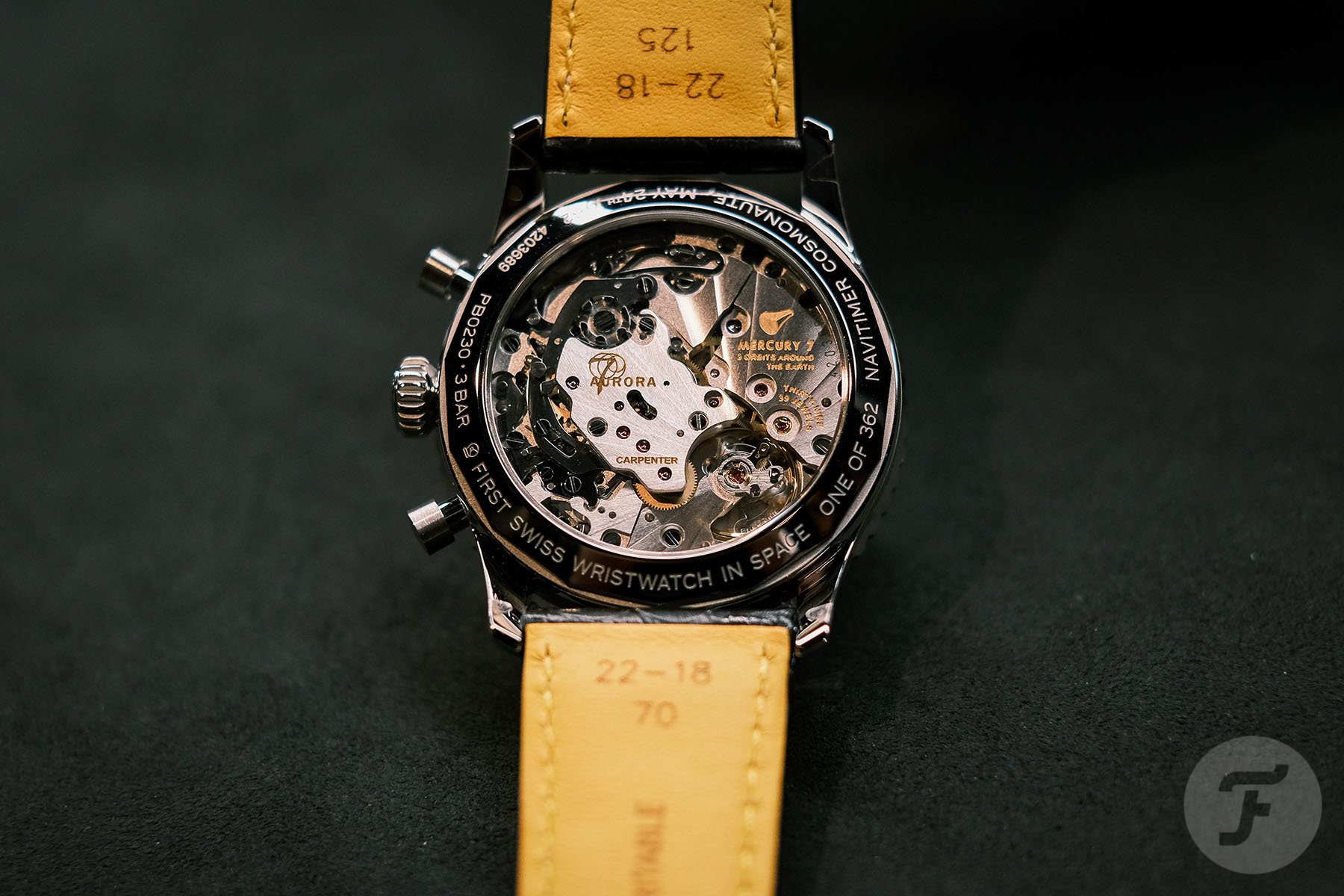 As I said before, the new Cosmonaute is a nod to the past but is a thoroughly modern construction. The 41mm diameter closely follows the dimensions of its inspiration, but there are some variances. For instance, the dial only mentions “Navitimer,” whereas the original states “Cosmonaute.” This is partly due to Navitimer being a more recognizable model name. Also, when Carpenter’s watch was rendered defective following the Mercury-Atlas 7 mission, he wrote to Willy Breitling to restore the watch. Instead, Carpenter was provided a brand new Cosmonaute that only states “Navitimer” on the dial — the same as the new watch. It does state “Navitimer Cosmonaute” on the periphery of the exhibition case back. The replacement watch is in the Carpenter family’s possession, while the original space watch belongs to Gregory Breitling, grandson of Willy Breitling.

The applied logo is the embossed wings design that shares the AOPA emblem outline from the 1950s. The classic design follows from the inclusion on the Navitimer earlier this year and bears a striking resemblance to an open book. Turning the watch over reveals the in-house B02 movement via the sapphire case-back, with stunning bridge engravings. The Aurora 7 logo has three circles around it, referencing the three Earth orbits performed by Scott Carpenter and his name, the capsule silhouette, and the jewel count. The B02 is based on the B01 but instead has a manually winding mechanism with a 24-hour cycle. Yet, it preserves the 70-hour power reserve and relative slimness due to the lack of a rotor. 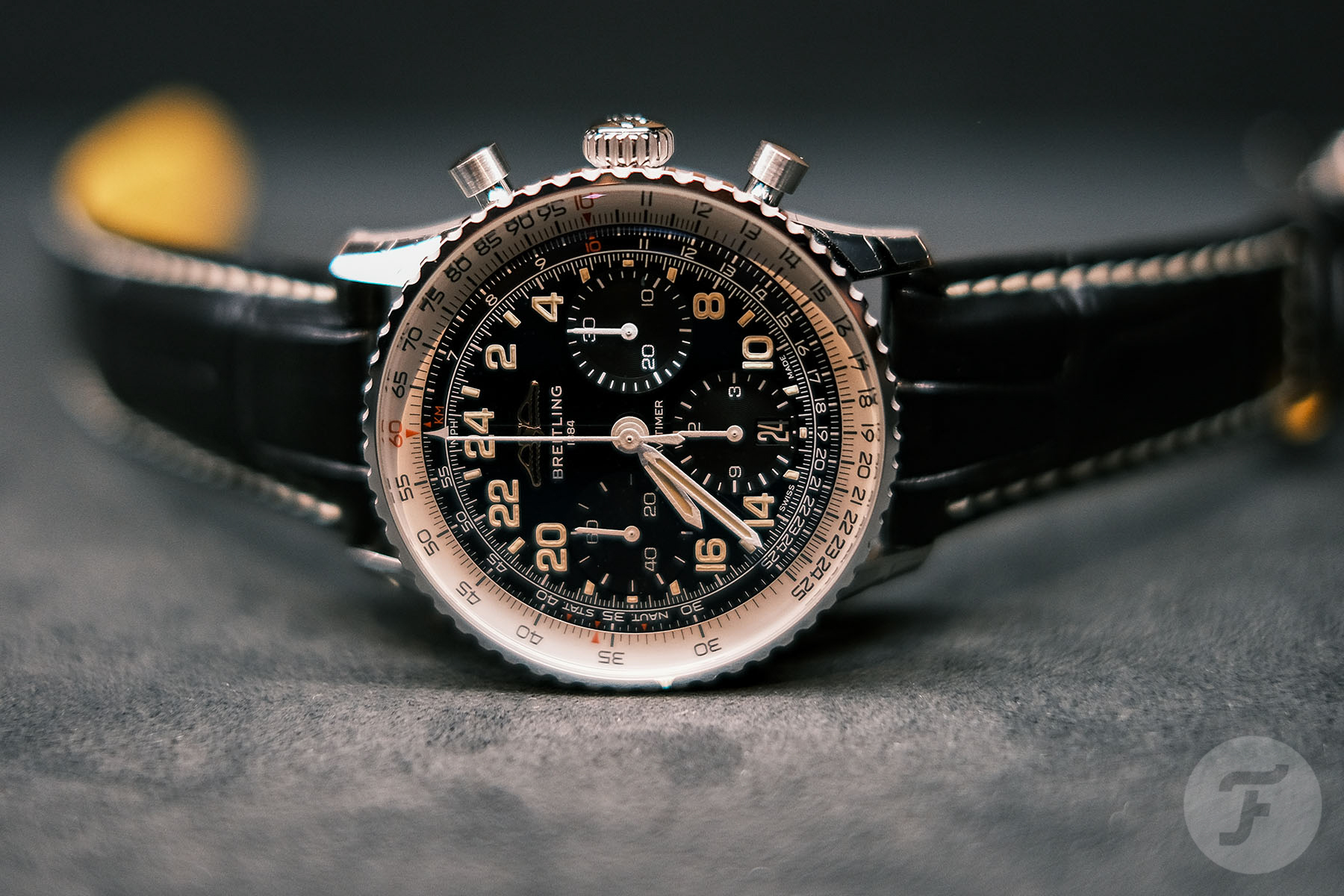 As you may glean, Breitling has scrutinized the past while making an appealing watch for today’s market. Adding to this is the protruding shape of the bezel. Carpenter’s brief in March 1962 requested the ability to operate the bezel with space gloves. However, the outer bezel grip material is rendered in platinum for the new model. There’s a premium quality to the inertia and feel of the bezel, but it equates to a higher price  in comparison to an all stainless steel watch. 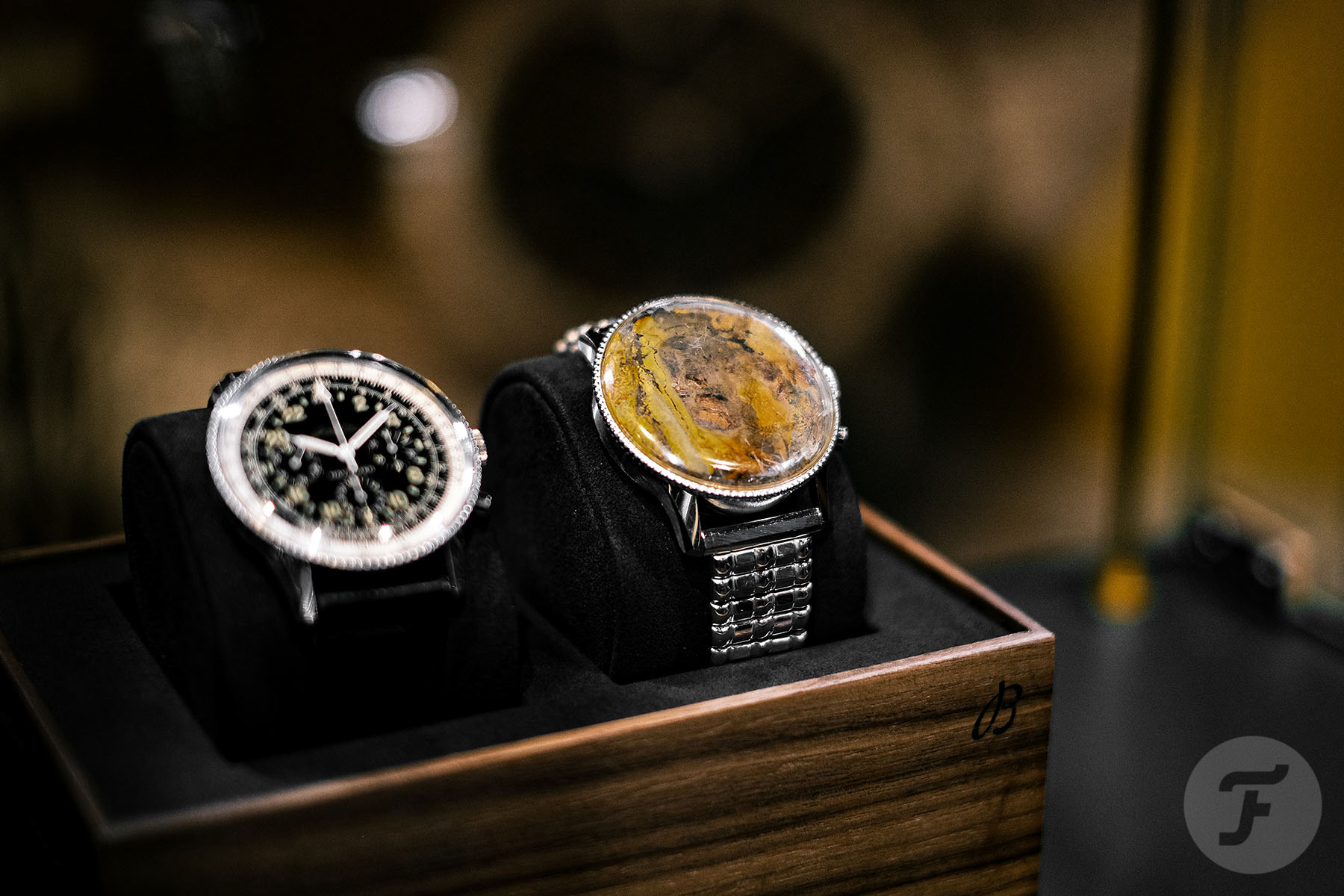 There is still a question about why Breitling or NASA did not continue with the Cosmonaute as a flight-qualified NASA-issued timepiece. In 1964, after the Mercury-Atlas 7 mission, Carpenter took a leave of absence to work on the SEALAB project. However, broken bones from a scooter accident grounded Carpenter for future space flights. This severed the thread of further Breitling endorsement within the agency. And while NASA went out to tender for qualifying wristwatches for space, led by James Ragan, Breitling was either not approached or did not submit a suitable proposition. There’s no knowing if the watch as it was in 1962 would’ve passed the stringent tests. But understanding the importance and pride of specific wristwatches in space proves how history could’ve been different.

The Breitling Navitimer B02 Cosmonaute is a limited edition of 362 pieces on either a brushed/polished steel bracelet for €10,550 or on a black alligator leather strap for €10,200. The 41mm stainless steel case with platinum bezel has a water resistance of 30 meters. This is in keeping with the standard Navitimer depth rating due to the rotatable sapphire crystal and bezel construction. Find out more on the new Breitling Cosmonaute here.