Black, Cool, And Teal All Over — The Three Newest Additions to the Seiko Prospex “The Black Series”

Seiko divers… Unmistakable, ubiquitous, legendary. Since the Japanese brand released its very first diver in 1965 — the famous 62MAS — it has not fallen short of coming up with new collections that have been revised and then re-interpreted. Amongst the upgrades, one will find better construction, brighter and longer-lasting lume, and upgraded movements, while the styling of the watches remains more or less the same. That is true with the Prospex line, however, in the past few months, all of the divers got a full black-ops treatment with the three new models in the Prospex “The Black Series.”

This series is not new, as Thomas Stover wrote about when the brand introduced three models this year. But it is nice to see that Seiko continues to propagate this special series to more of its iconic models and to their newish mid-size Solar-powered divers. On May 10th, Seiko added three models to this already fantastic collection — the SNE587P1, the SRPH97K1 (aka the “Samurai”), and the SRPH99K1 (aka the “Tortoise”). There are, however, two elements that differentiate these three models from the ones Thomas wrote about. Let’s find out! 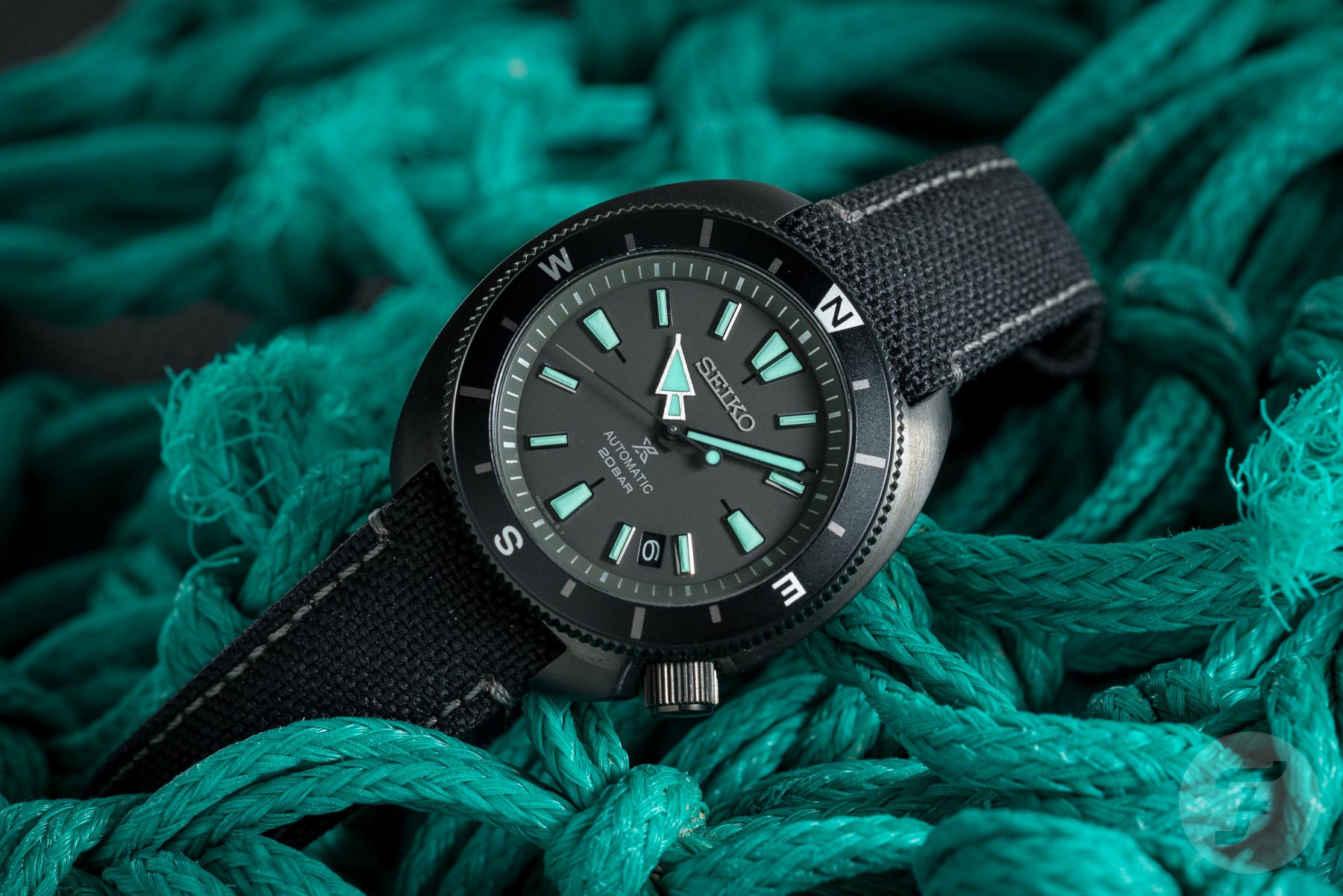 What’s up with the dark stuff?

Ever since the very first dive watches were designed for the military during World War II, they had to be endowed with certain functionalities that were closely followed by a specific design language. First and foremost, they had to be legible in all lighting conditions, since the frogmen using these watches would dive far below the surface where light becomes scarce. That’s when lume was invented, and rumor has it that Panerai was the first brand to create a submersible watch for the military whose dial could be seen deep down below (I think we can’t all agree on that!). 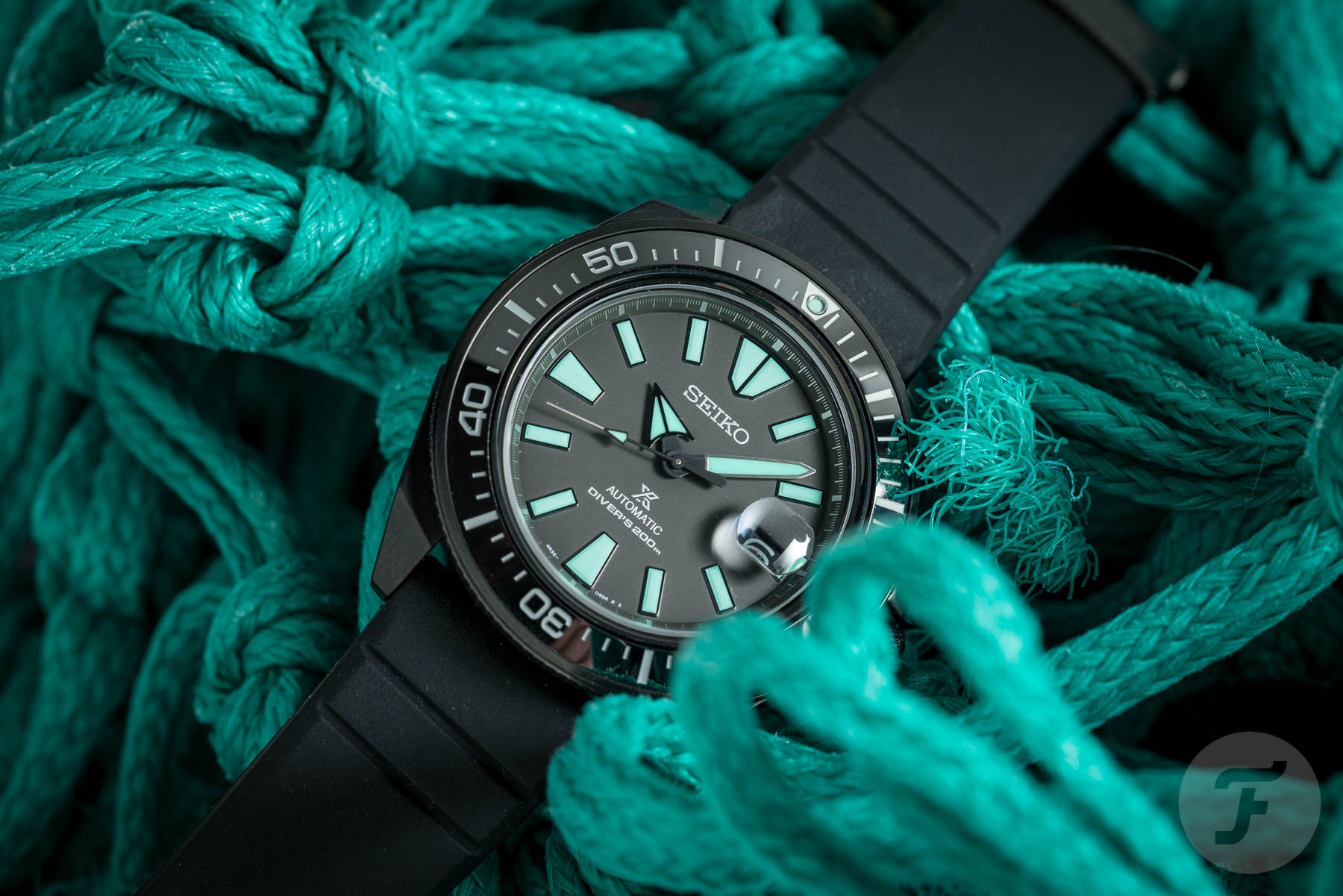 Further advancements in the design of dive watches made dials even more legible — matte dials that didn’t reflect light, contrasting painted markers (in white or variations of it), more potent lume that could shine brighter and longer, and easy-to-read handsets. The Rolex Submariner and Blancpain Fifty Fathoms best exemplify how these design elements were codified in the late 1950s and without interruption throughout the beginning of the 21st century. 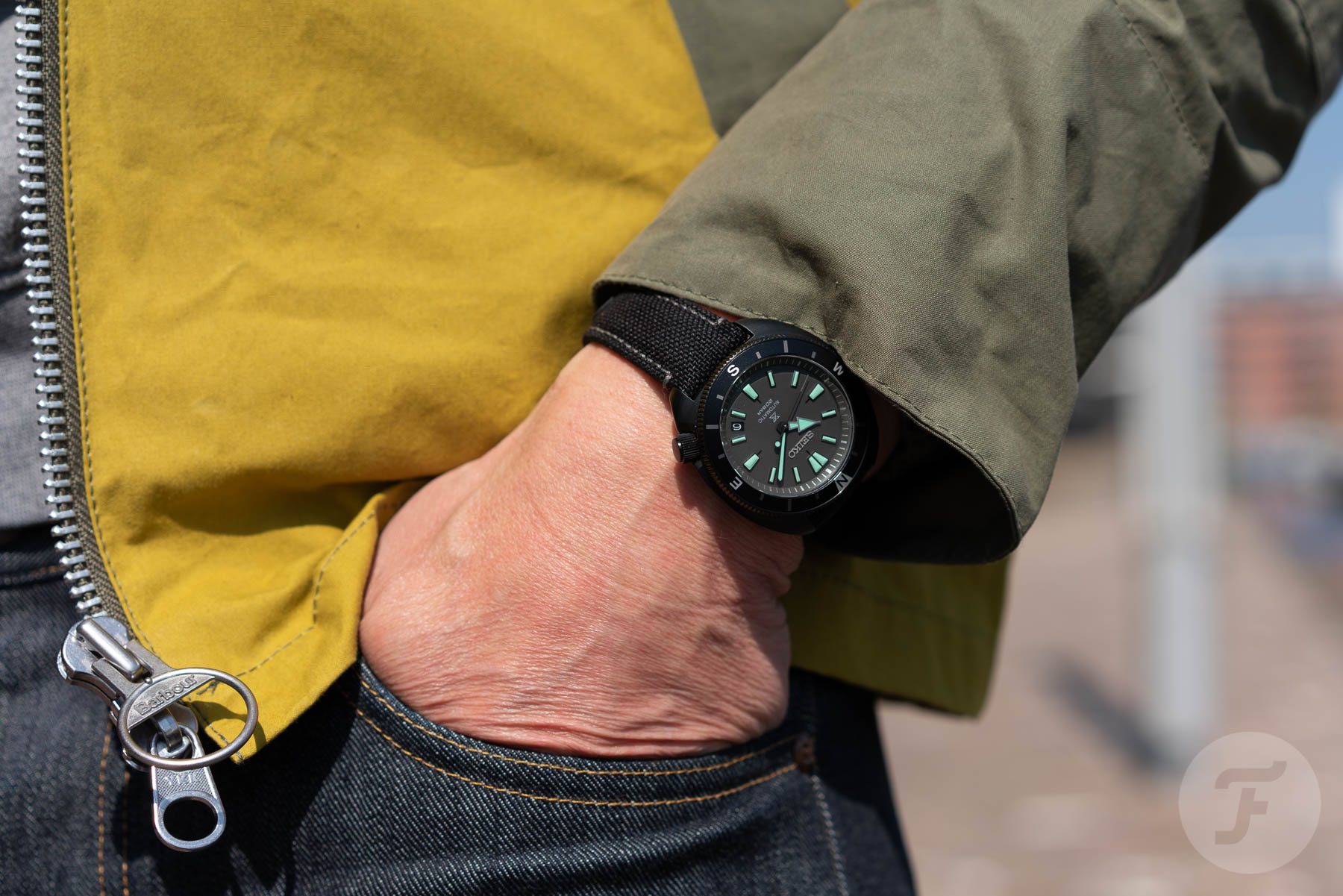 So, without trying to write a Wikipedia article about dive watches, it is important to note that divers need to be legible. That’s where “The Black Series” comes in as it makes the most important information on the dial — the minute hand and its relation to the bezel markings — stand out. In the case of the SPB253J1, SPB255J1, and SPB257J1 that Thomas introduced, the accent was put on making the minute hand orange and the first 15-minute markings on the bezel orange as well. This makes it easier for the wearer to know how long into the dive he or she is. And having an all-black case further reduces the chances of light reflection. 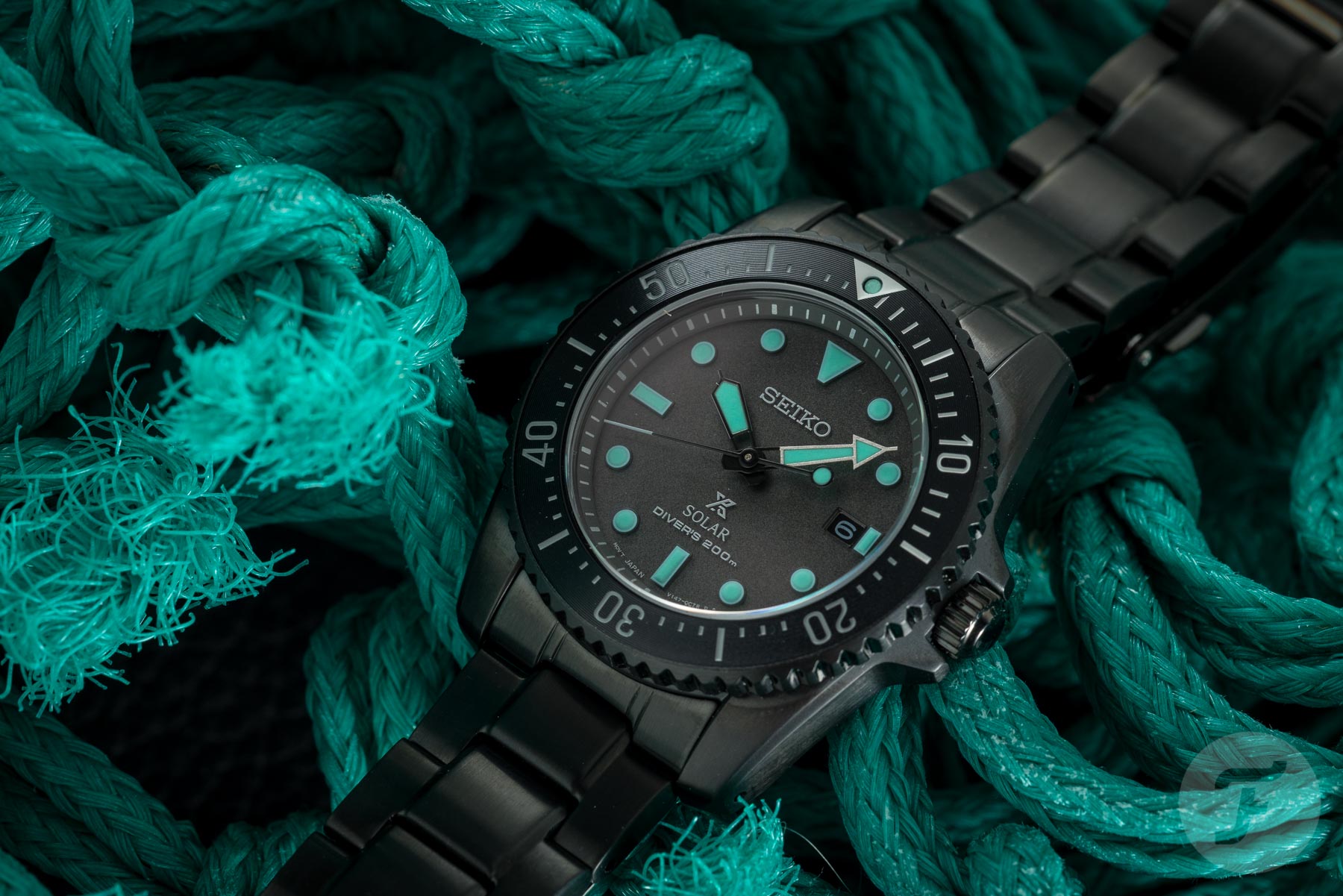 What’s up with the lume?

Now that we know why the black stuff is important, let’s look at what makes the SNE587P1, SRPH97K1, and SRPH99K1 different than the previous additions to “The Black Series.” While orange was the star of the show in the previous release, this time, it is the lume that seems to make these three models different and edgy. I’m not going to lie — when I first saw the pictures of these little guys, I thought, “Oh, it reminds me of the Oris D65 with its smurf lume.” I think it does, truly. What this is, according to Seiko, is a new type of long-lasting bright green Lumibrite which is a color that stands out in the dark. (I know, “smurf” is more blue than green!) 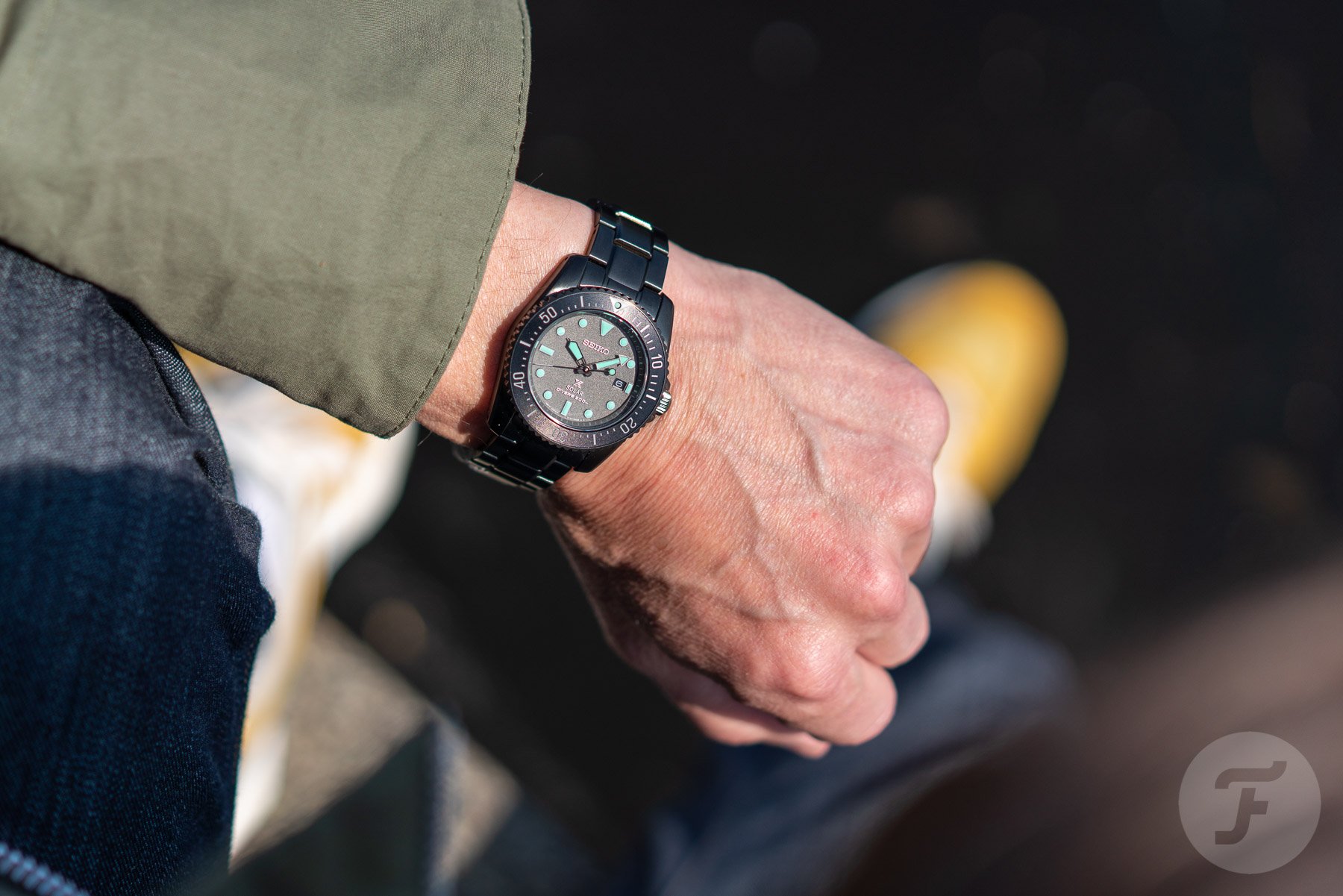 Well, it does stand out quite a bit and gives the dials of the three watches an air of coolness and practicality. I personally love this lume color and how it contrasts with the dark gray dials. There is something inherently “toolish” about having such bright lume on a watch, as it makes it looks like the lume is always charged, ready to shine. As a recreational diver myself, I find this totally useful anywhere deeper than 15 meters below the surface, as light has a tendency to become scarce quite quickly. So having this type of lume makes a lot of sense and it is literally the only color you see on the dial — again, making this a utilitarian and practical diver. 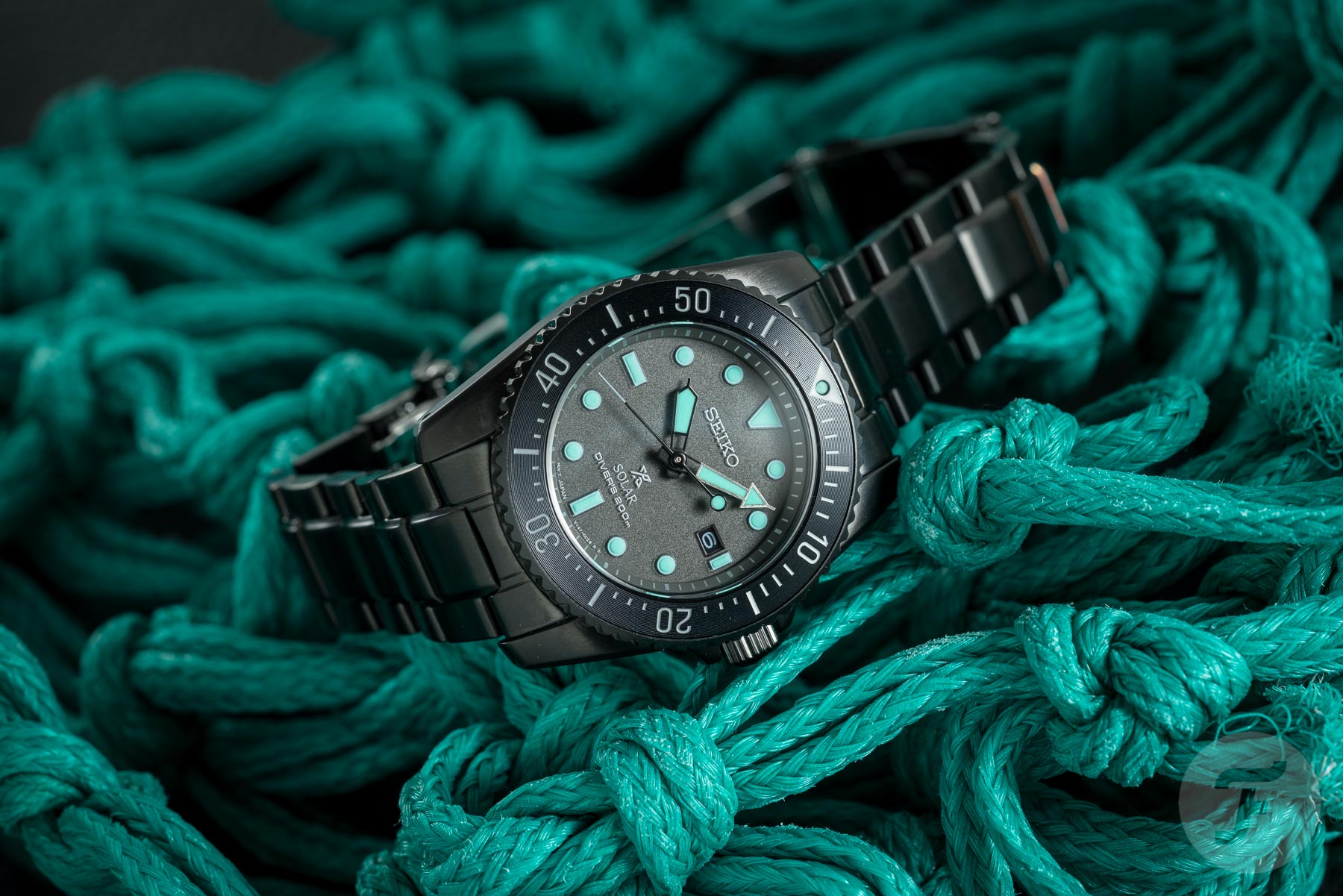 About the new Seiko Prospex “The Black Series” models

The SNE587P1 heralds from a class of mid-size Seiko divers that come in the reference numbers SNE56, SNE58, and SE59, all powered by the V147 Solar movement. This makes total sense for a tool watch. In short, the watch is accurate, and you won’t have to change the battery. Pretty neat, if you ask me. Being a mid-size diver, the SNE587P1 has a 38.5mm case diameter, a 46.5mm lug-to-lug distance, and a 10.6mm thickness. It is equipped with sapphire crystal and a screw-down crown and case back, giving this model a solid 200 meters of water resistance. This model is limited to 6,000 units and retails for €640. 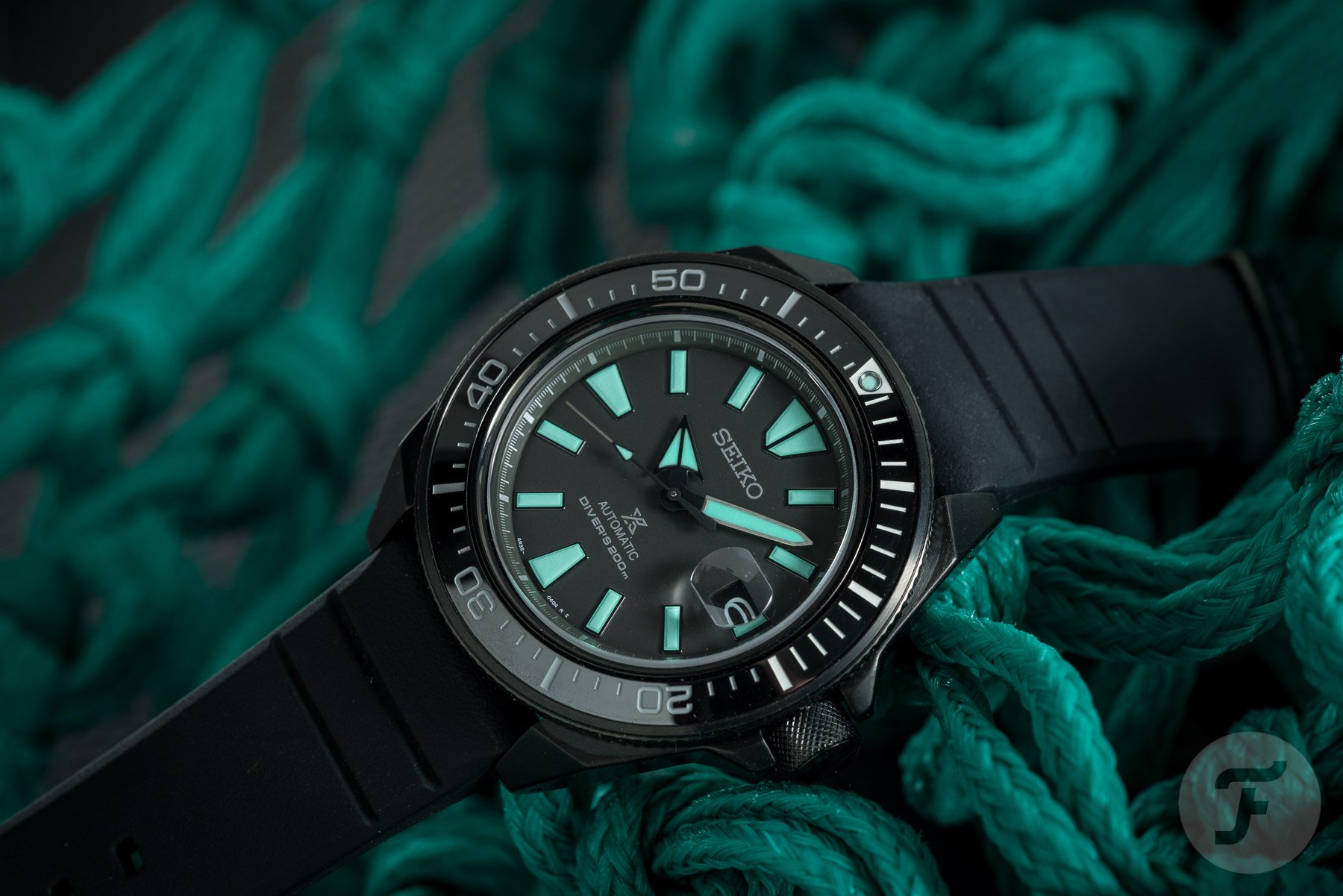 The SRPH97K1 comes from the popular Samurai line of Seiko divers. Unlike the SNE587P1, which comes on a bracelet, the former comes on a black silicone strap. This is perhaps a great move given the fact that the Samurai is chunkier with a case of 43.8mm in diameter, a lug-to-lug of 48.7mm, and a thickness of 12.8mm. The SRPH97K1 is powered by the automatic 4R35 movement — not the top of the line from Seiko but pretty decent and a movement that helps keep the cost of the watch at €690. This model is limited to 8,000 units. 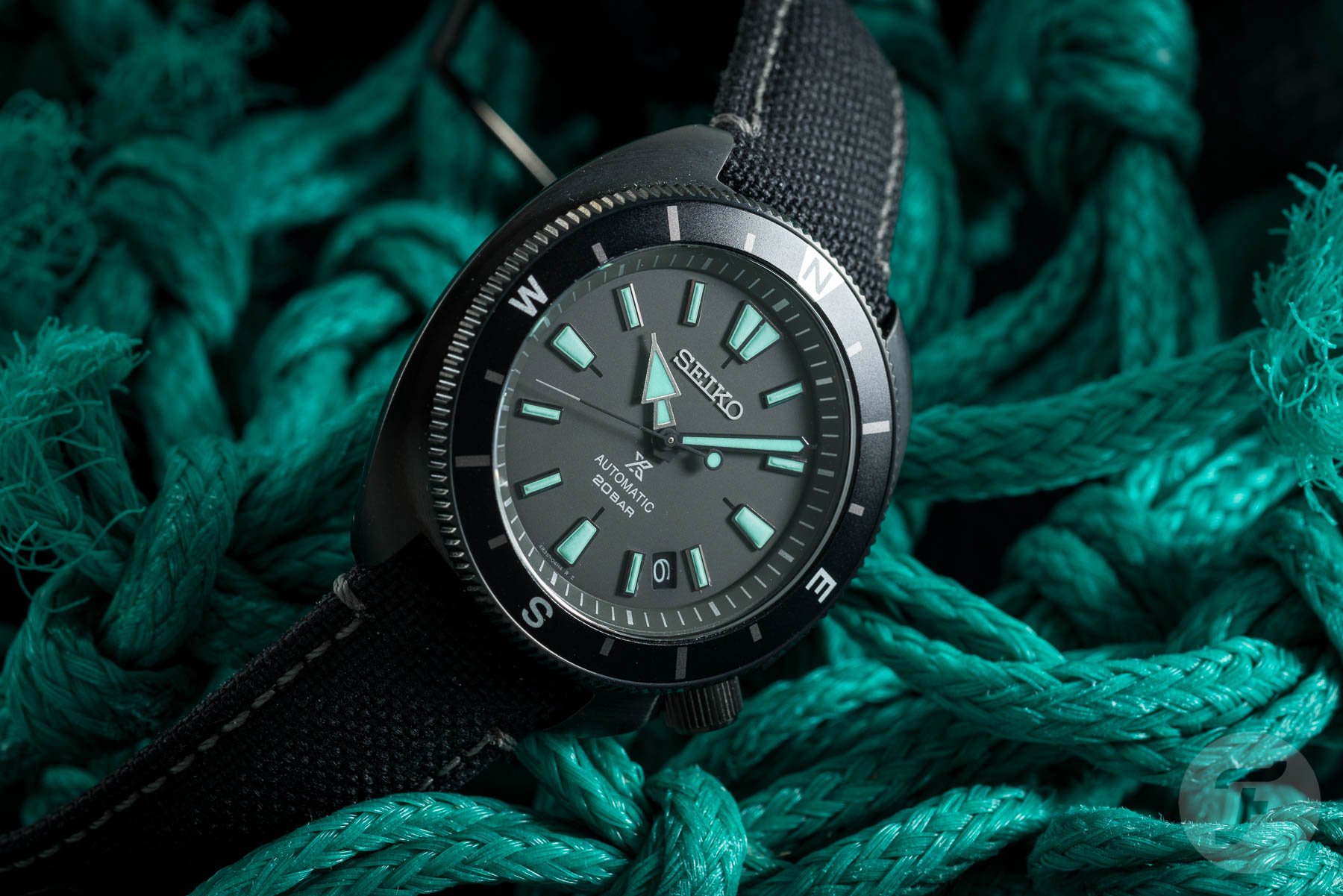 Last but not least, the SRPH99K1 “Tortoise” is also on the larger side for a diver, coming in with a case diameter of 42.4mm, a lug-to-lug of 45.2mm, and a thickness of 11.7mm. Also available on a strap, the SRPH99K1 is equipped with the automatic 4R35 movement, a sapphire crystal, and 200 meters of water resistance. Unlike the other two, the SRPH99K1 comes with a compass bezel, not a count-up bezel as normally seen on divers. It retails for €590 and is limited to 7,000 units. 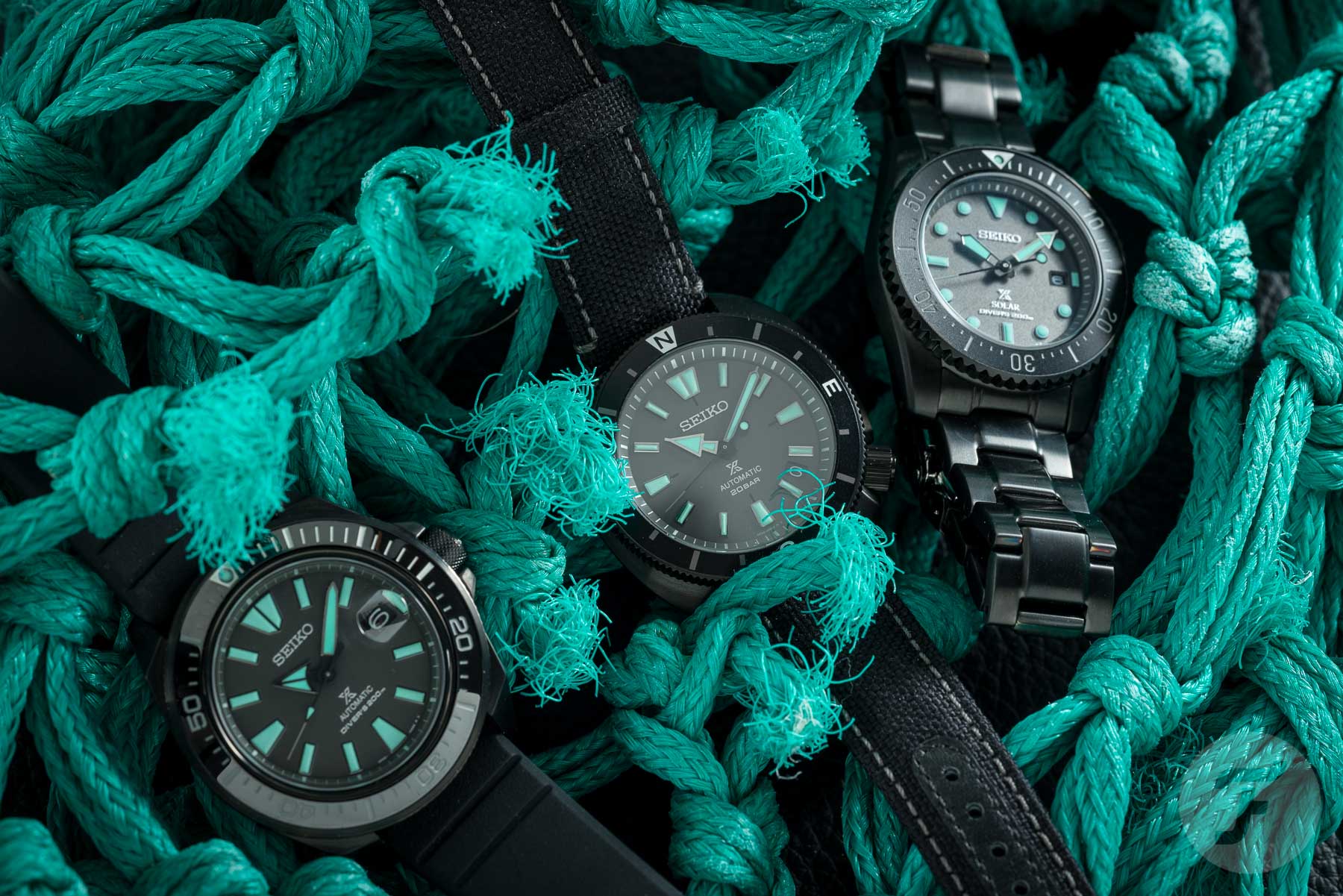 Seiko impresses again and always finds a way to cater to a particular market of the watch enthusiast community by releasing blacked-o versions of its popular divers. Although “Glowing Smurfs” are not two words that Seiko would use to describe the green Lumibrite of these references, the result is something inherently cool that I could see myself wearing for a secretive night dive somewhere exotic.

What seems to be the trend here with Seiko and “The Black Series”, however, is that the brand only changes the way a watch looks and neither how it works nor the movement inside. This is maybe a missed opportunity to transform a “regular” diver into a true “black-ops” diver.

What are your thoughts on these latest additions to “The Black Series”? Would you get one yourself? Let us know in the comments.