Hot on the heels of their official release, we go hands-on with the three new Seiko Alpinist references.

It was just last week that we published an article on discontinued Seiko watches that collectors love. One of the watches I discussed was the long-running SARB017 Alpinist. I also mentioned that Seiko was planning to release a trio of new Seiko Alpinist watches and it just so happens that those pieces arrived at the local Seiko Frankfurt boutique this past Thursday. I took the opportunity to visit the shop and the fantastic team there was gracious enough to allow me to handle and photograph each of the new models. Here’s your chance to see all three and get some feedback on whether the addition of two new colorways along with some higher-end (and cost) attributes are worth your time. 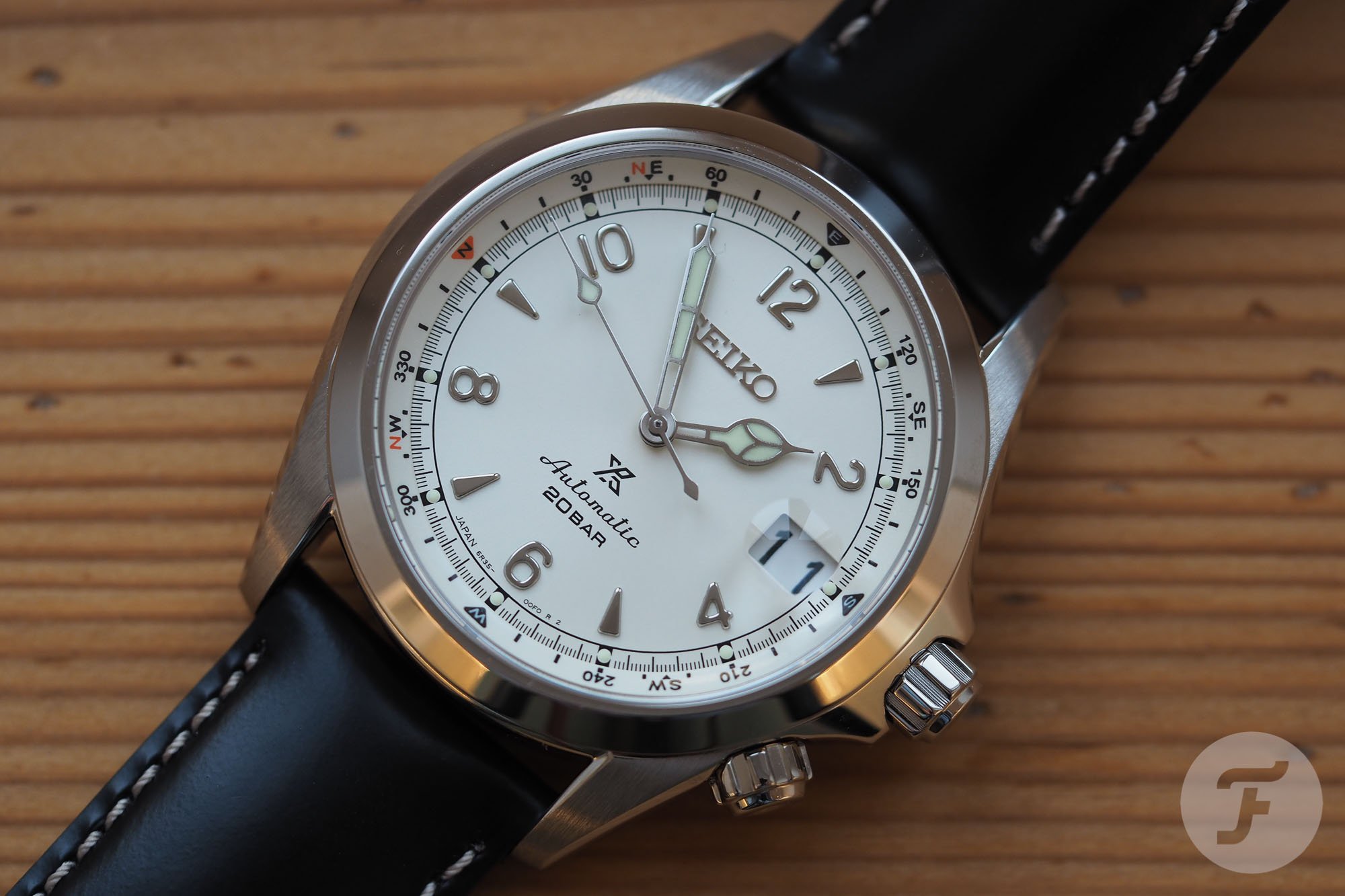 The New Seiko Alpinist Models – Alpinists by any Other Name

When I discussed the former SARB017, I mentioned that the new Seiko Alpinist pieces would join other watches such as the Seiko Sumo in going more upscale and by adding the Prospex “X” logo on the dial. What I didn’t mention is that these watches no longer contain the word “Alpinist” on the dial or case back any longer. You’ll read other articles on these timepieces referring to them as “Alpinist-inspired”, which feels like Seiko PR speak for “we don’t want to use the Alpinist name any longer.” Well, at the risk of sounding combative, I am going to refer to this trio as Alpinists because they absolutely are in my mind. Note that this is not the first time we’ve seen Seiko step away from a legendary name as the latest 300 Meter divers, such as the green SLA019, are no longer officially known as Marinemasters. But here again, even the Seiko boutiques refer to them by their former, and in my view rightful, names because fans refer to them this way. With my rant now done and dusted, let’s look at some watches! 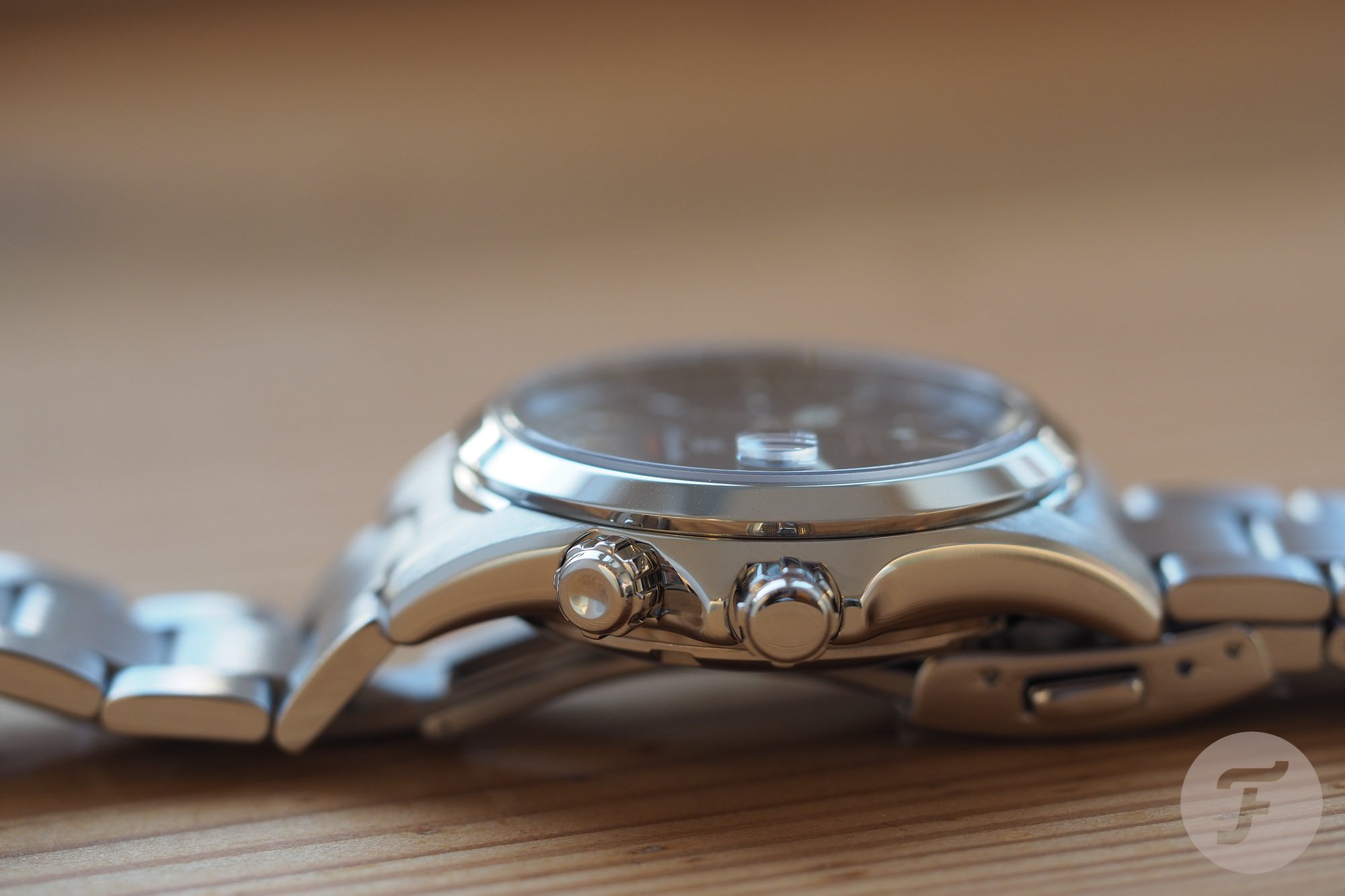 Thoughtful Changes to a Favorite

If you’re familiar with the old SARB017, then the new Seiko Alpinist models will come off as extremely familiar. With their twin crown setup, the lower controls an internally rotating compass, while a screw-down crown handles the time and date. These new watches stray very little from their predecessors design-wise. Those crowns, by the way, remain unsigned. The stainless steel case comes in at a still-manageable 39.5mm diameter with a 46mm lug-to-lug length. Thickness seems to be up slightly to 13.2mm. 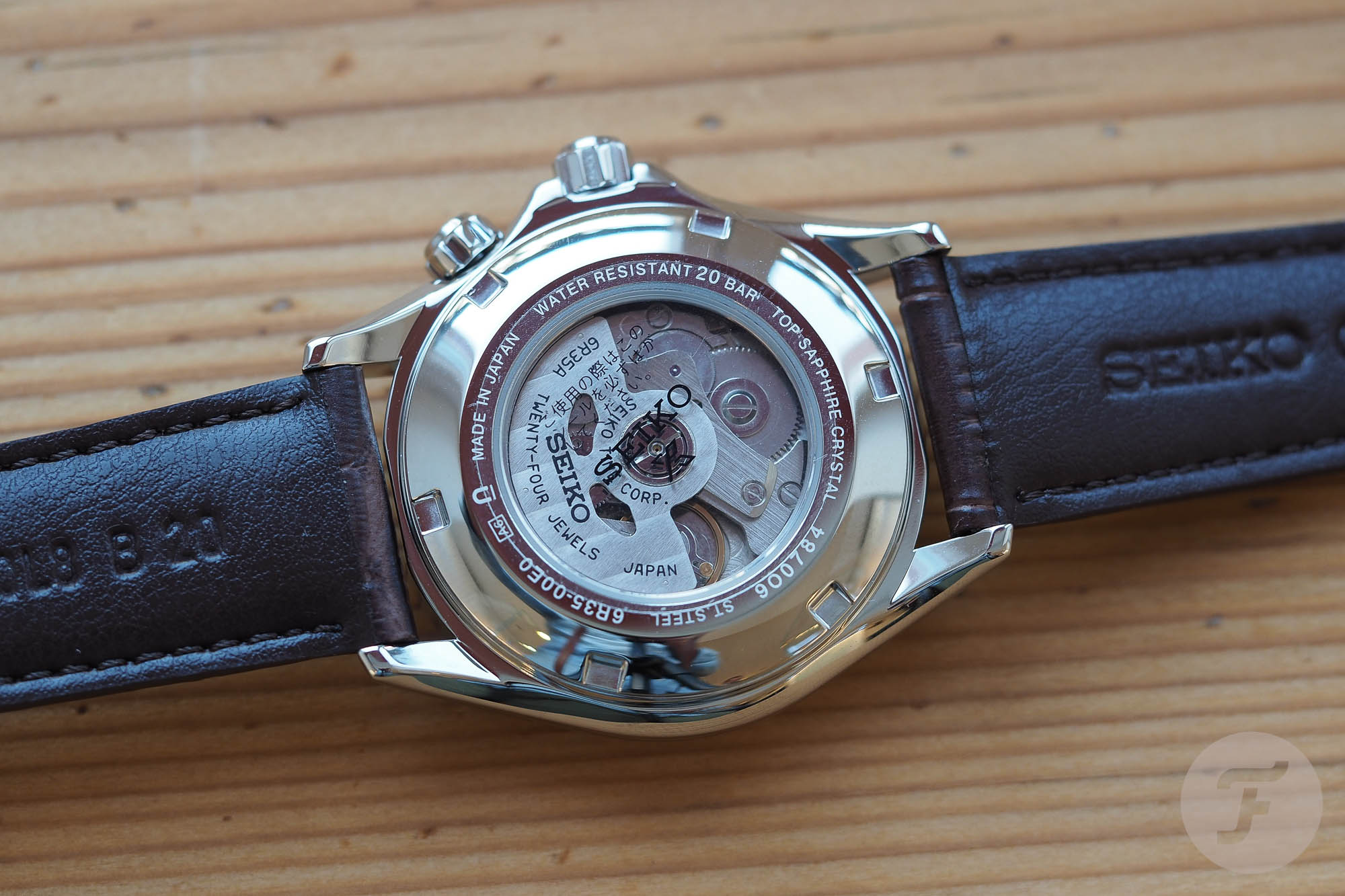 Inside, the new Alpinist gets an upgrade as the movement changes from the 21,600vph 6R15 to the same frequency 6R35 and that now means 70 hours of power reserve. Pleasingly, Seiko continues to move its Prospex line away from Hardlex crystals and over to sapphire instead. It also picks-up a display case back in the process. And in what will likely go down as a somewhat controversial move, the new pieces bring back a cyclops over the date window. Water-resistance remains at a “go anywhere, do anything” 200 meters. But the biggest change we have is the introduction of two additional colors aside from the green edition that qualifies as a neo-classic. If you’re a real Alpinist fan, these three models echo the colors of the 4S15-powered pieces that marked the return of the line in 1995. The Spring Bar has a fantastic article documenting their history. 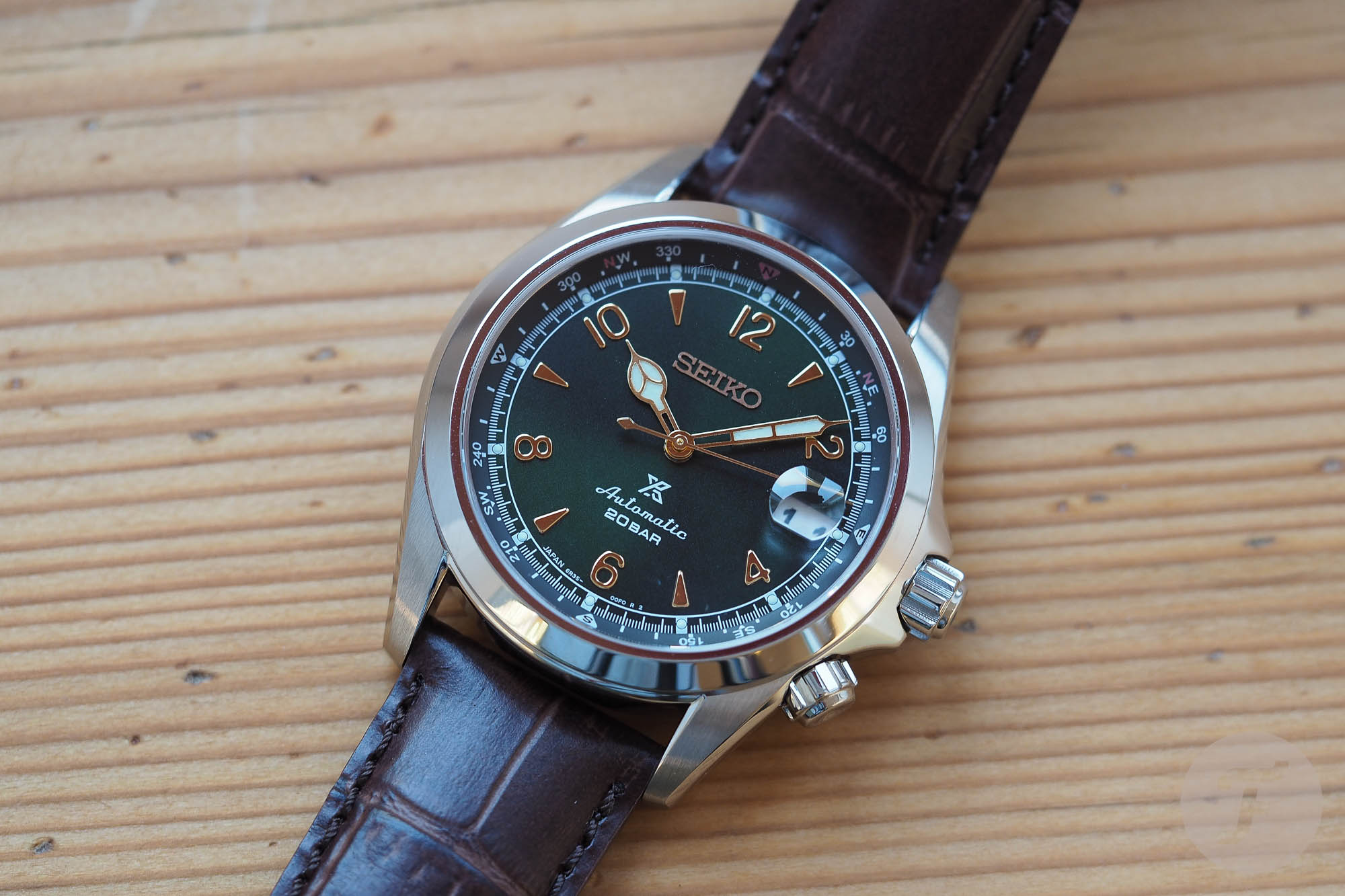 The first new Seiko Alpinist is reference SPB121 and this is the watch that, in car terms, looks like a mid-model makeover. In other words, aside from the technical updates, there’s little new to see here. But that’s ok because I find those aforementioned changes to be material and useful. This green version is also available only on a 20mm reptilian-embossed brown calf leather strap with a signed push-button deployant clasp. 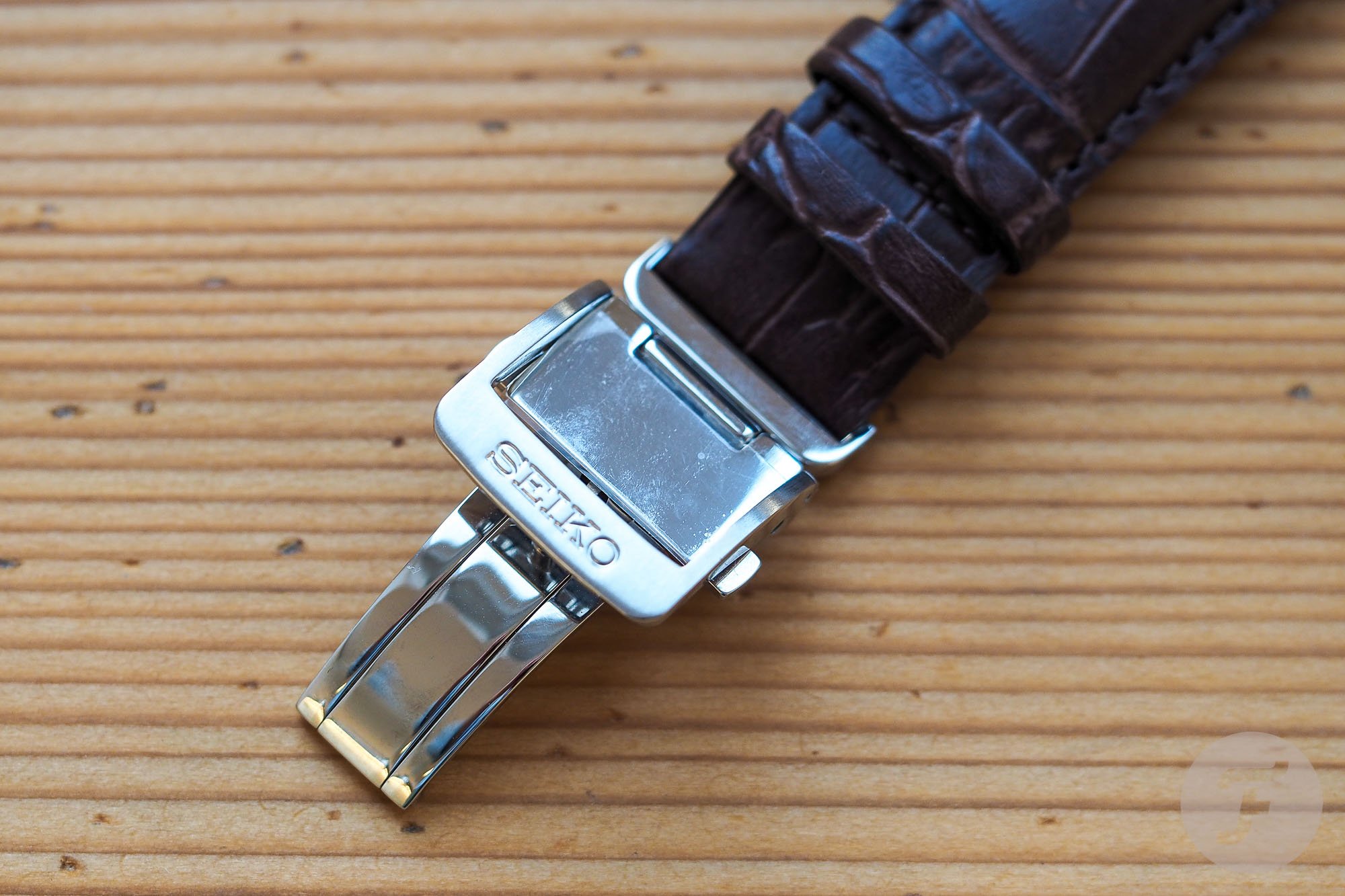 For longtime Seiko fans, know that this strap represents a marked improvement over the brown rawhide chew bone that was formerly masquerading as a watch strap. I’ve admittedly not spent a ton of time with the prior Alpinist, but if you look at the dial detail on SPB121, it looks fantastic. The gold applied indices and logo are all created with a precision that fits or box slightly above its €719 weight class. 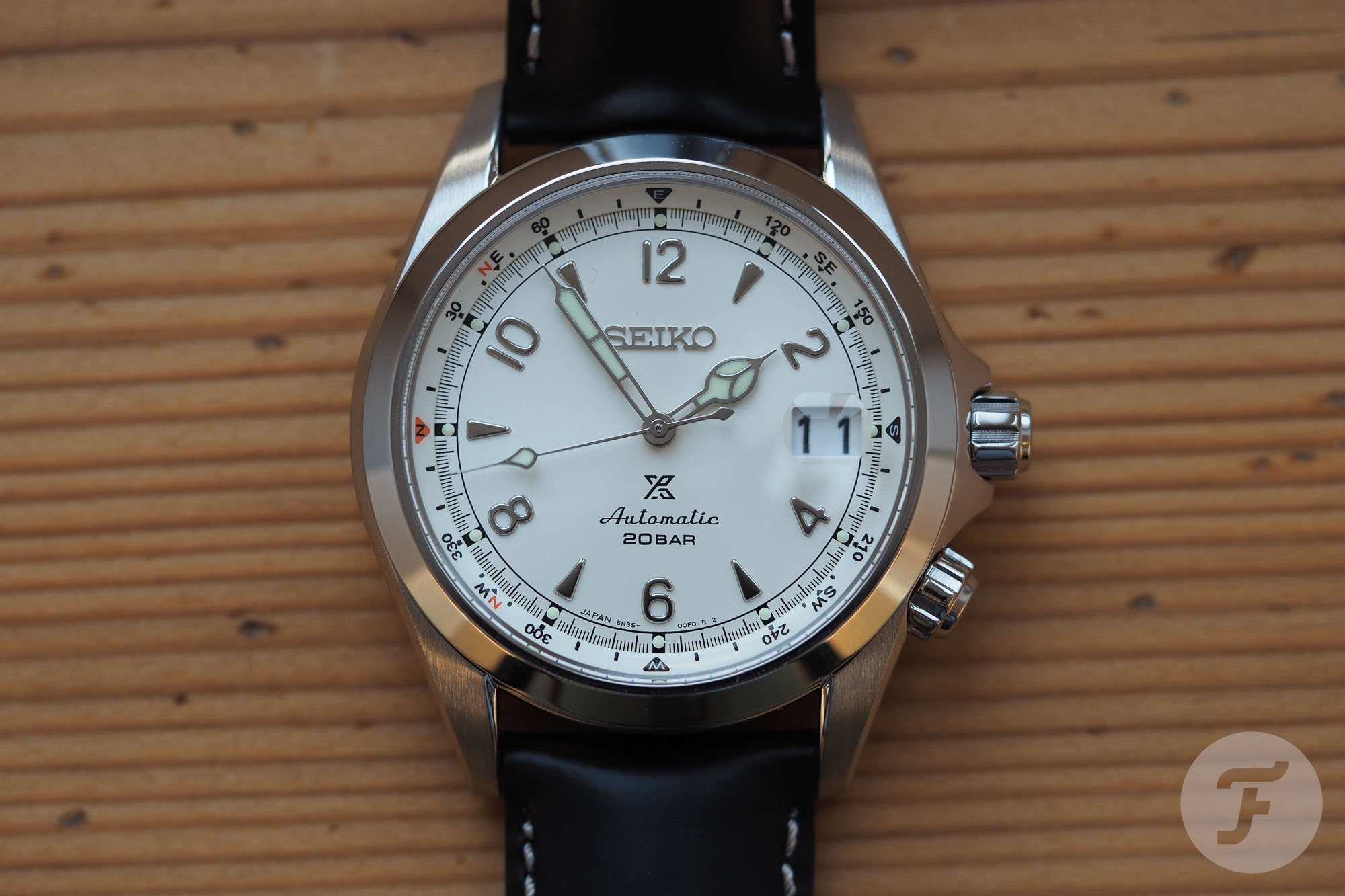 The next new Seiko Alpinist is reference SPB119 and this marks the long-awaited return of a white-dialed option. The 4S15-powered version with a white dial (from the mid-’90s) featured gold indices much like the green variant, but Seiko chose to give the 119 silver indicators instead. Available only on a black calf leather strap with white stitching, this model also comes with a deployant clasp. Aside from the silver characteristics, the bulk of the font and compass markings use black printing. 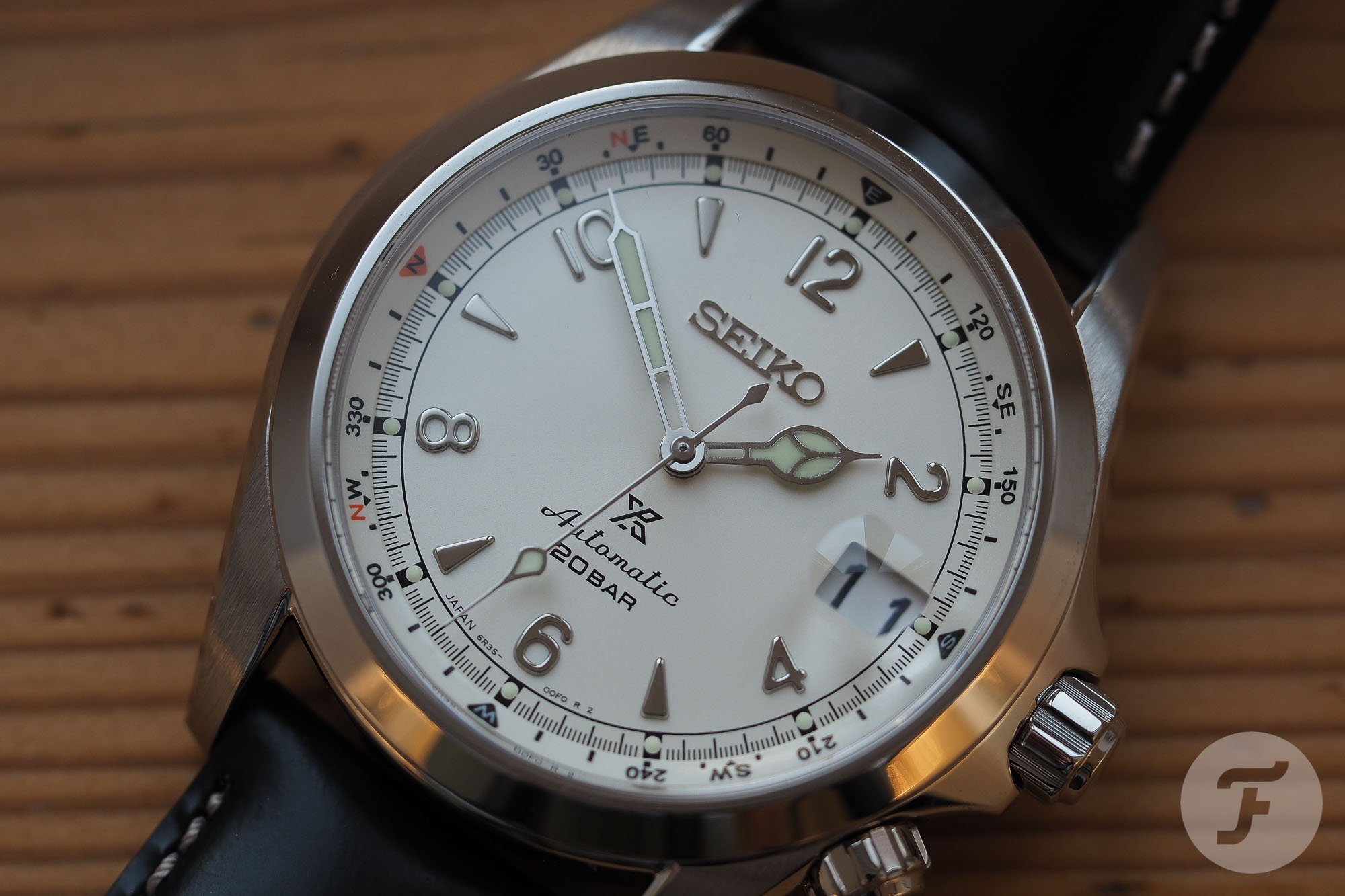 There’s just a touch of orange for those compass readings that call out “north”. The strap is of decent quality, but I don’t entirely love the styling. While the watch design is extremely crisp, the strap falls short and comes off as a bit sloppy. But as said, this watch is a real looker and if only three days can be taken as a barometer, it’s going to be the top seller. Pricing is the same as the 121 at €719. 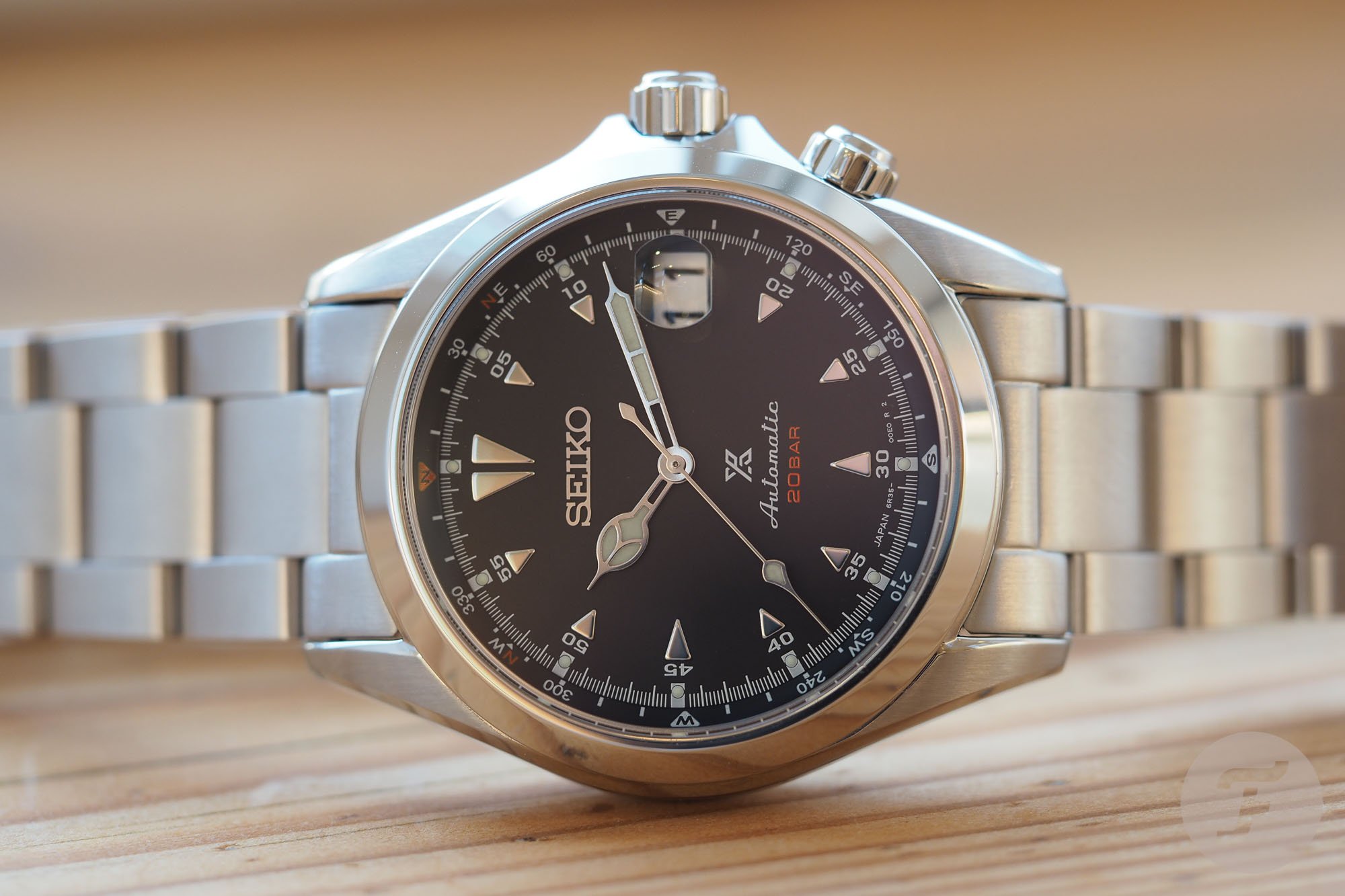 Ok, I gave it away in the subheading, but the black-dialed SPB117 is the one I’d take home. The eagle-eyed among you will immediately recognize two key differences: This watch does not employ Arabic numerals as indices and it only comes on a bracelet. Regarding the dial and its use of triangles as markers, this also stays relatively true to its 25-year-old 4S15-powered ancestor. I like it because I find the look more simple and clean (those Arabic numerals have always struck me as creating too busy a dial). I also like the red “20 BAR” detail on the detail that’s in keeping with this variant’s history. 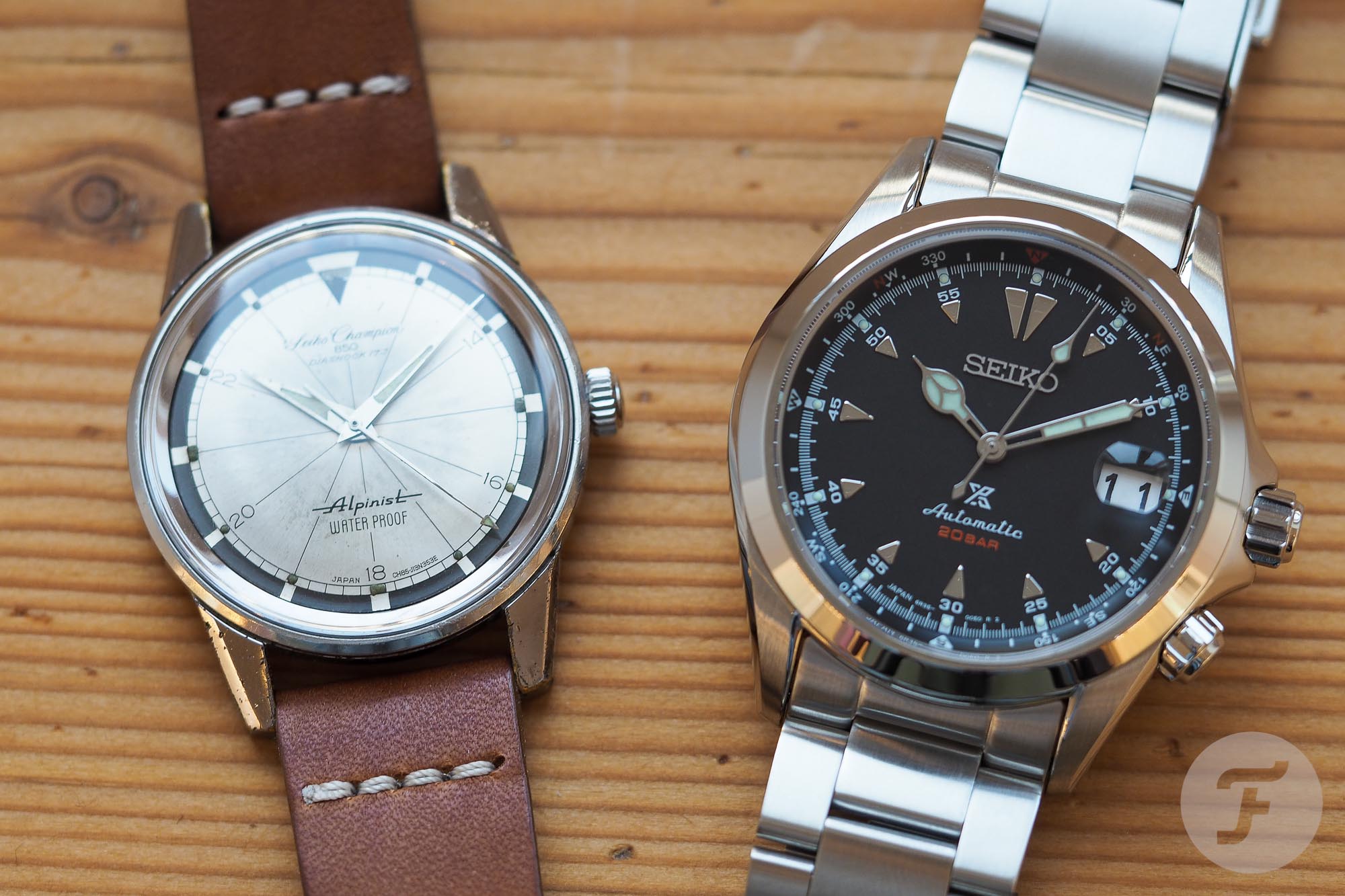 And while it is very difficult (and sadly so) to draw comparisons to 1960’s Alpinists like mine above, if one truly squints perhaps they can envision the sector dial of the old showing up in today’s triangular markers. Yes, that’s a reach, but it’s all I’ve got. 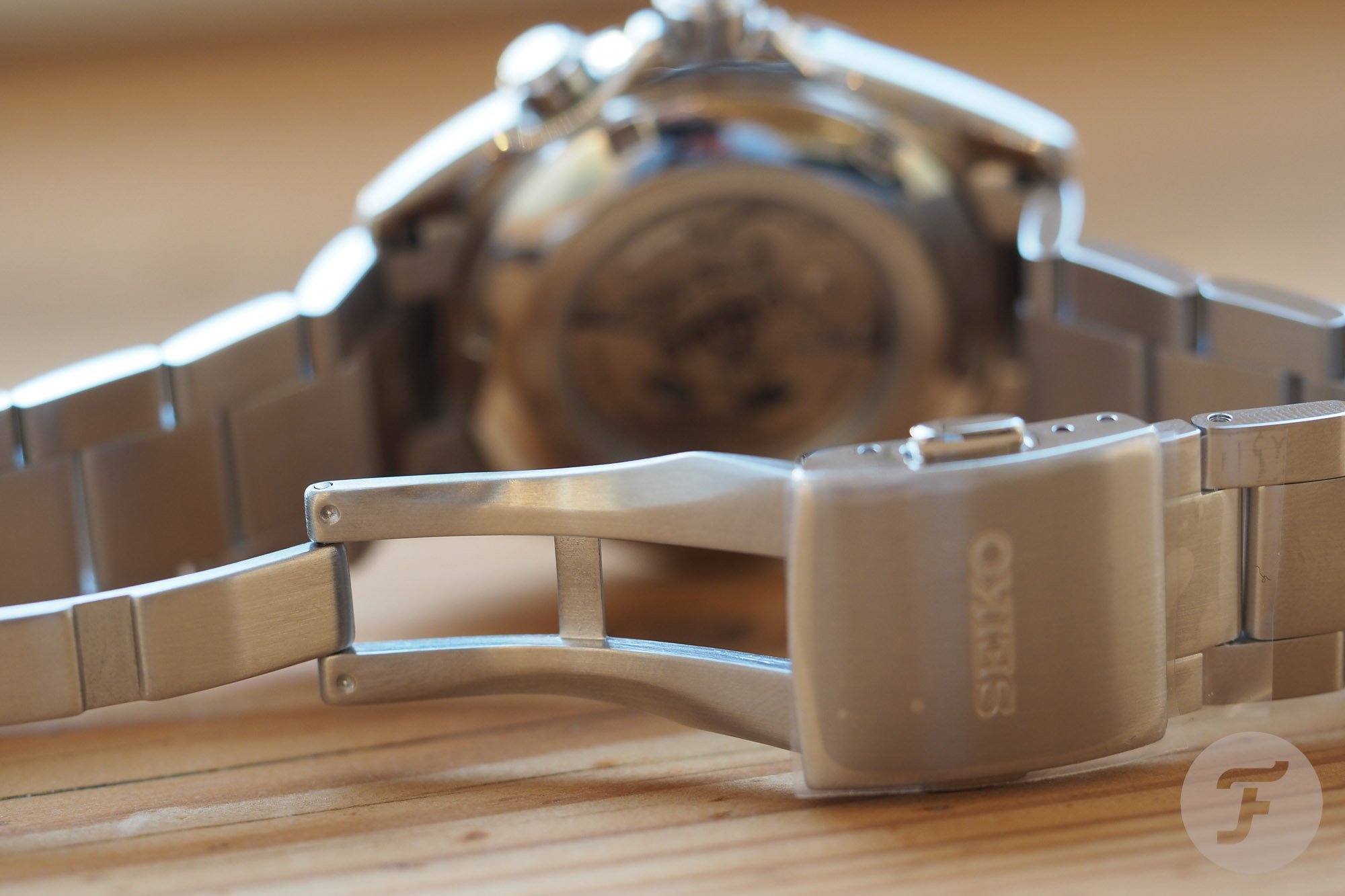 When it comes to the bracelet, Oyster-style links are used. That’s consistent with the bracelet that was available on the SARB017. However, and this is a big “however” this bracelet is lightyears ahead of the oft-maligned accessory that Seiko previously produced. The links on this bracelet are incredibly supple, well-articulated, and quite thin. The clasp is another sure sign of improvement as the underlying deployant moves away from the cheesy stamped models that Seiko gave us in the past. And take a look at that lovely little clasp with micro-adjustment! Honestly, the whole thing felt great to the fingers and on the wrist. What’s great here — and a bit of a shame if you really like one of the other two dials better — is that the SPB117 only carries a 20 Euro premium (taking it to €739) for this eminently wearable bracelet. 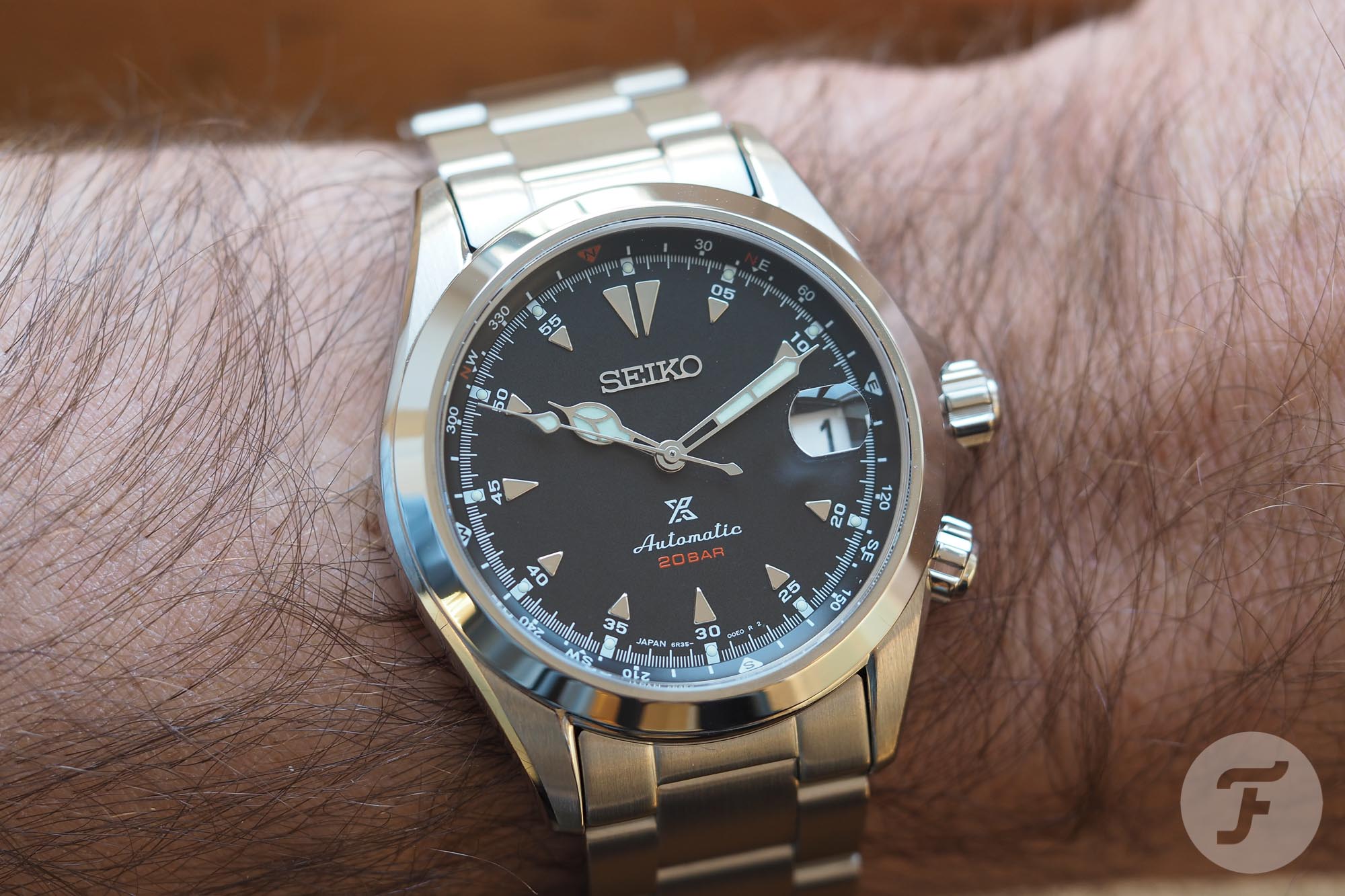 I’ve made it known that the modern Alpinist isn’t my favorite watch due to its visual complexity. Plus, I find the inclusion of a compass to be a relatively useless “complication” when compared to something like a 24-hour bezel, but I get that these watches are meant for exploring. With all that being said, I enjoyed my time with all three of these new Seiko Alpinist models — especially the black version and, to a slightly lesser degree, the white. Yes, just like in the case of the new Sumo diver, Seiko-philes will loudly bemoan the bit-by-bit transition of all the Prospex models to high-priced replacements. But again, these watches really are an upgrade. And as I always like to point out, where else are you going to look for a brand new watch that’s been produced fully in-house and with this level of specification at this price point? If you enjoy the styling and are looking for a truly wearable everyday watch, any of these would work perfectly and I think that the upgrades turn them into less of an apologist’s watch. In the end, I have no doubt that Seiko will find success with these three models and I’m happy that the entire globe now has the ability to buy them.

Thank you again to the Seiko Frankfurt Boutique for their time. The new Seiko Alpinist models do not yet appear on the Seiko site, but keep checking for more details.

Hot Topics
Laventure Automobile Chronograph With A Proprietary Movement — Marking A Huge Leap Forward For One Of The Industry’s Most Promising Brands
155 comments
We Talk To Swatch Group CEO Nick Hayek About The MoonSwatch
79 comments
Fratello Exclusive: An Inside Look At The MoonSwatch Production Facilities
75 comments
Selling Your Watch To A Dealer Or Trading It In — Tips From A Former Watch Dealer
49 comments
Summer Splash — Round 2 : Jorg’s Tudor Pelagos FXD Vs. Lex’s Hublot Big Bang Integral Ceramic Sky Blue
48 comments
Popular
Top 10 Rolex Watches – Overview of Models Favoured By Our Readers
Fratello
22
Hands-On With the Seiko Prospex SRPC91K1 – Save The Ocean
Robert-Jan Broer
15
Top 10 Best Watch Bracelets
Robert-Jan Broer
56