You can’t imagine this today, but back in the 1960’s, Seiko made two of its manufactories compete with each other. These two plants were Suwa Seikosha and Daini Seikosha. The objective was simple, to design beautiful watches and create the most accurate movements. Suwa Seikosha introduced the very first Grand Seiko in 1960. Not much later, in 1961, Daini Seikosha came with the first King Seiko. The rivalry went on until the 1970’s. This history is documented everywhere on the internet, yet official documentation is not really available on the subject (or only in Japanese language).

Grand Seiko is pretty well known. After an absence of 24 years, not counting the quartz Grand Seiko introduction in 1988, Grand Seiko is back in 1998. But what about King Seiko? It died in the 1970s and only a few collectors and enthusiasts seem to be aware of this – once – great collection. 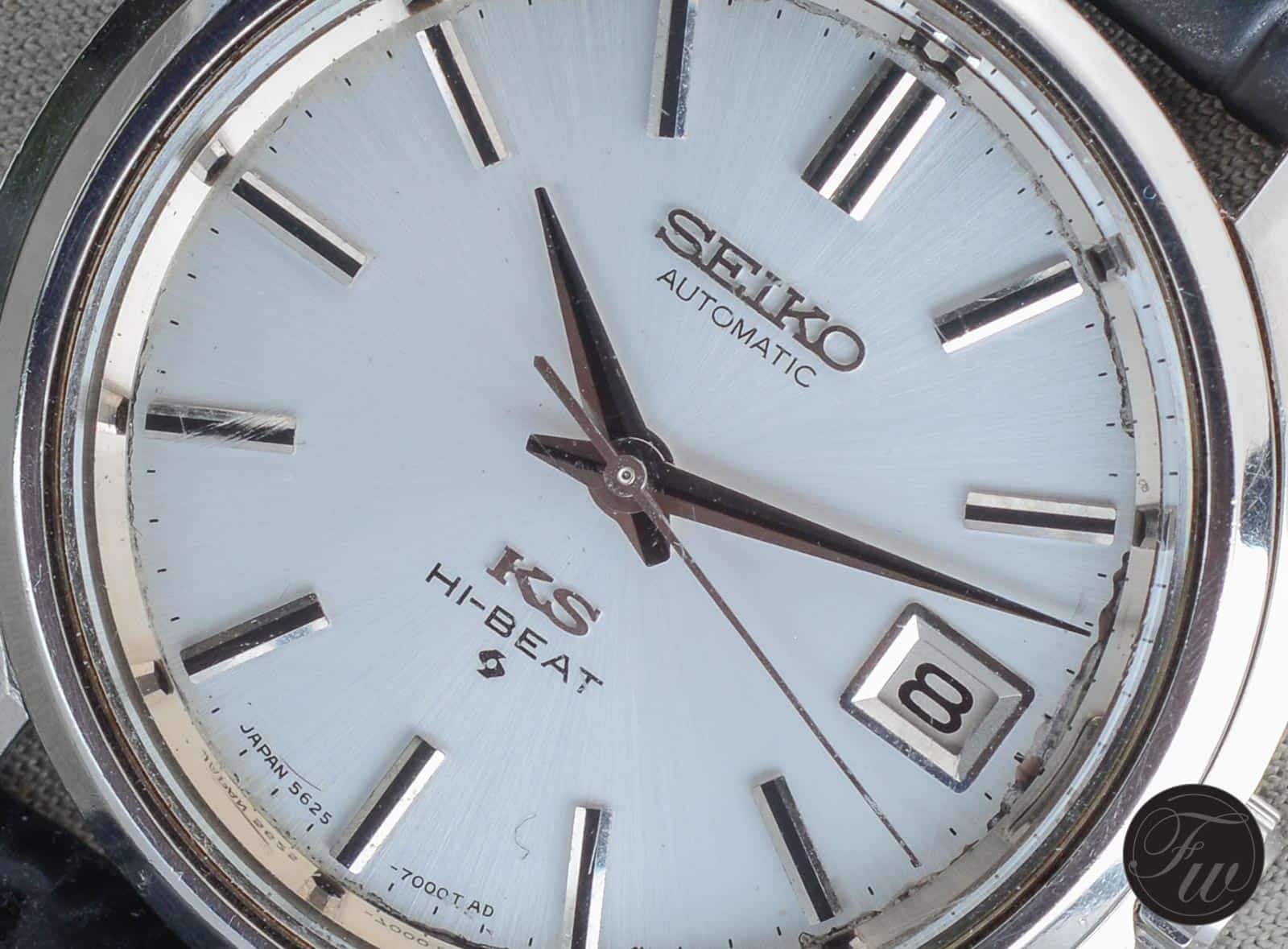 When I was looking for some vintage Grand Seiko watches, I noticed that the times you could pick these up for cheap are long gone. You can still find them for an interesting amount of money, on eBay and on forums. But often there is something wrong with it, either not serviced or not original. Not serviced is an issue with a lot of watches. Worn out parts need to be replaced and then it comes to availability of these parts.

Anyway, it was actually Michael Stockton who made me aware of this alternative collection of Seiko watches. He showed me the King Seiko watch he has during one of our first meetings. He did an in-depth review of that King Seiko 45-7001 in this article.

Fast forward a few months. I meet up with my watchmaker – or our watchmaker, as most Fratello Watches team members uses his services – and he shows me a watch roll packed with Seikos. King Seikos and Grand Seikos. The Grand Seikos are quartz watches and the King Seikos are all mechanical. Things went really wrong when he told me to take the watch roll with me, to have a closer look. 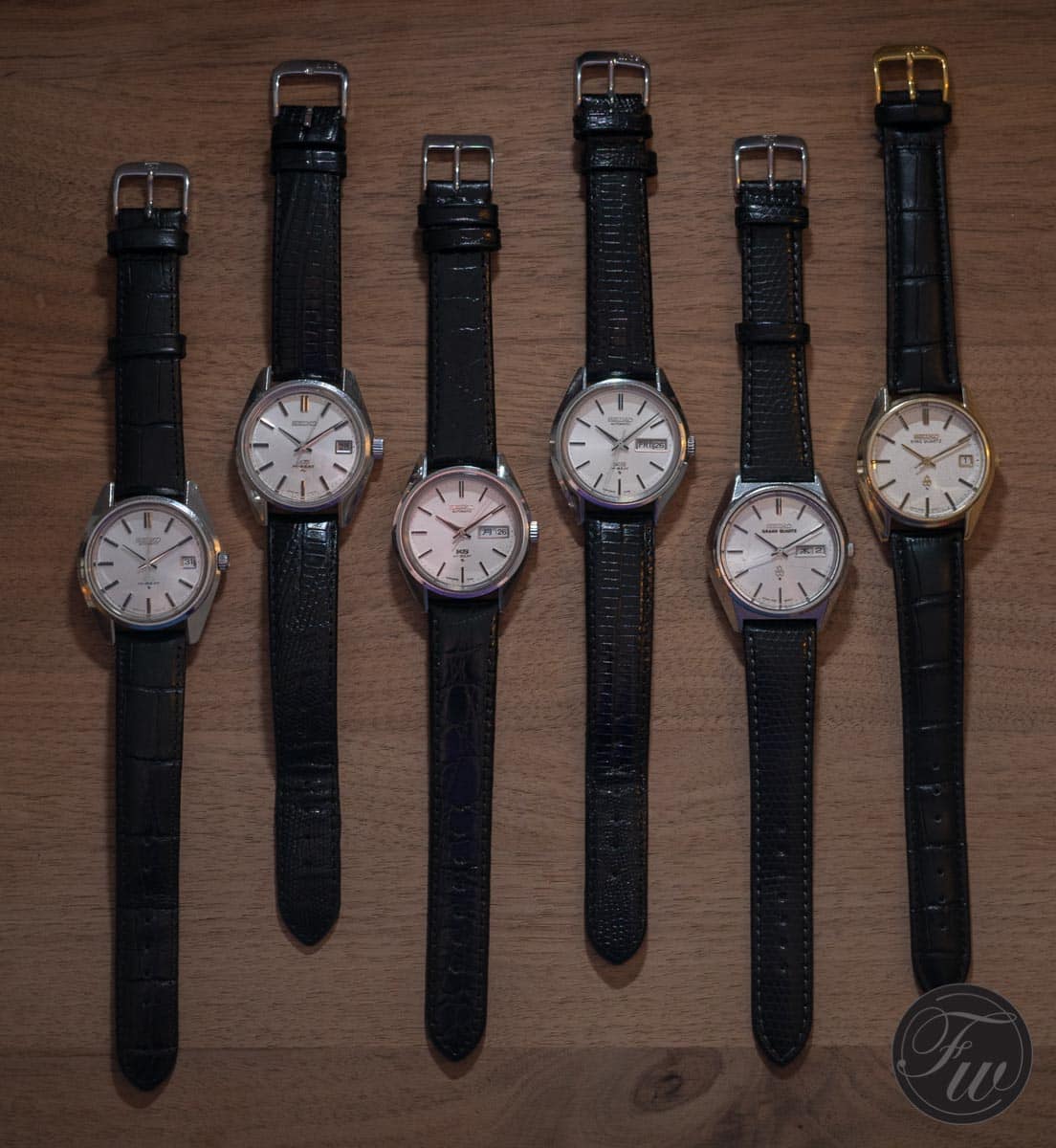 Although the King Seiko 45-7000 was my objective, I wasn’t able to find a nice one. So I settled for a King Seiko 5625-7000, which has the same case, or close, but with a date movement. For a whopping €250 Euro, this watch was delivered from a seller from Spain to my doormat in just a few days. The strap on it says Genuine leather, but I can’t imagine this is the case. So that needs to be replaced.

The watch itself keeps perfect time, something I didn’t expect to be honest. My experience with older Seikos is that they rarely went in for service. My watchmaker confirmed that most old Seikos he received have worn out parts and look terrible. Like many of the 30-40 year old Rolexes he receives. People just don’t think that a service also has a preventive function. Only when a watch stops or when it starts to do 10 seconds in 5 seconds, they go to their watchmaker. Anyway, my King Seiko 5625-7000 keeps good time. But I will have it cleaned and serviced anyway. 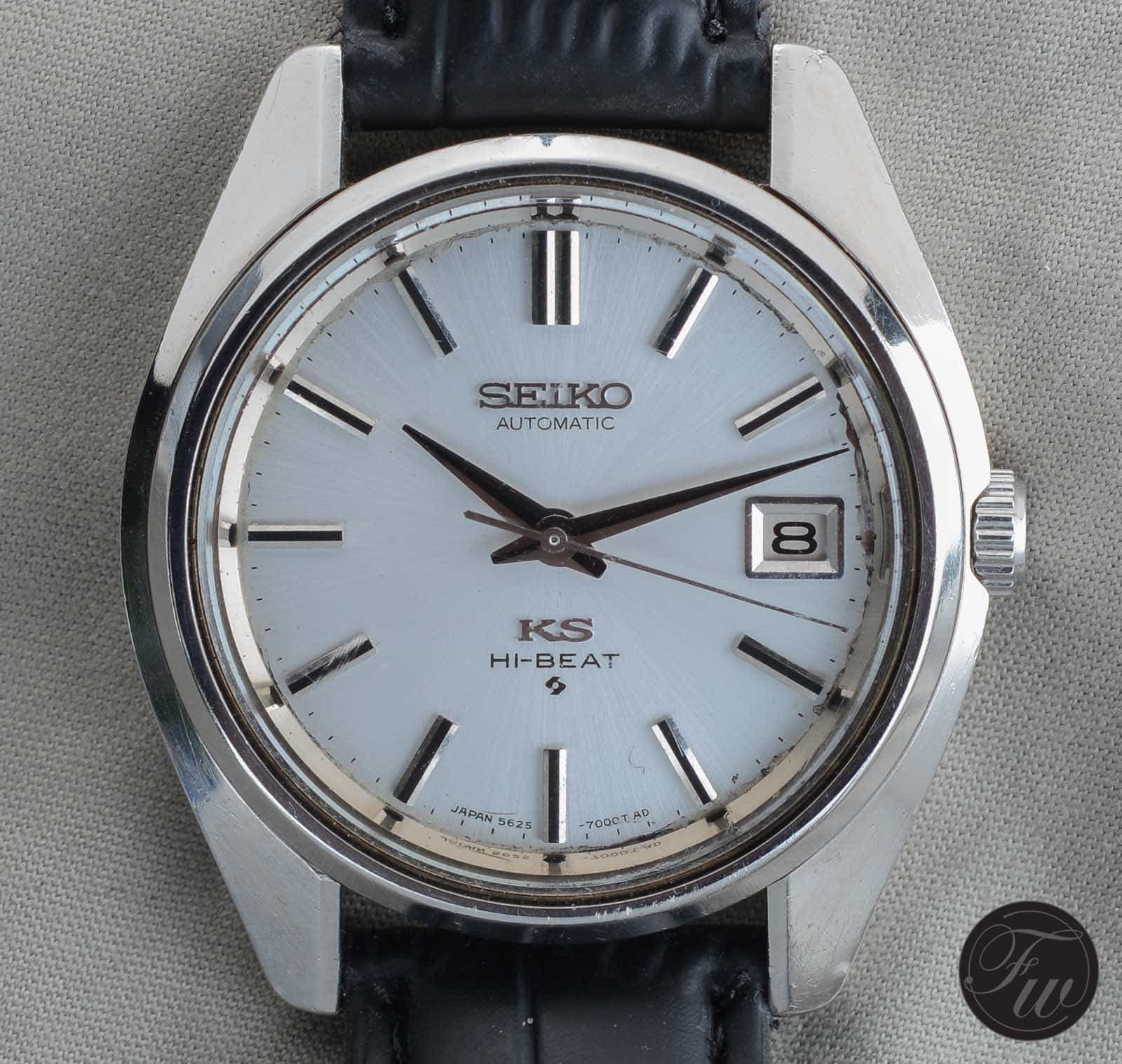 The sun burst dial of the watch looks awesome. It has fat markers and those typical King Seiko & Grand Seiko dauphine hands. The crystal is mineral cyrstal, and could need a replacement. Below you see the KS logo and a mention of the Hi-Beat movement. In this case, Hi-Beat means 28,800 vph, not 36,000 vph. The hand-wound King Seiko Hi-Beat models did have a 36,000 vph movement. There are some King Seiko watches that are also chronometer certified. However, due to some restrictions this couldn’t be mentioned on the dial (anymore). However, you will see some King Seiko movements have a 6-digit number engraved in the movement. These are chronometer rated. 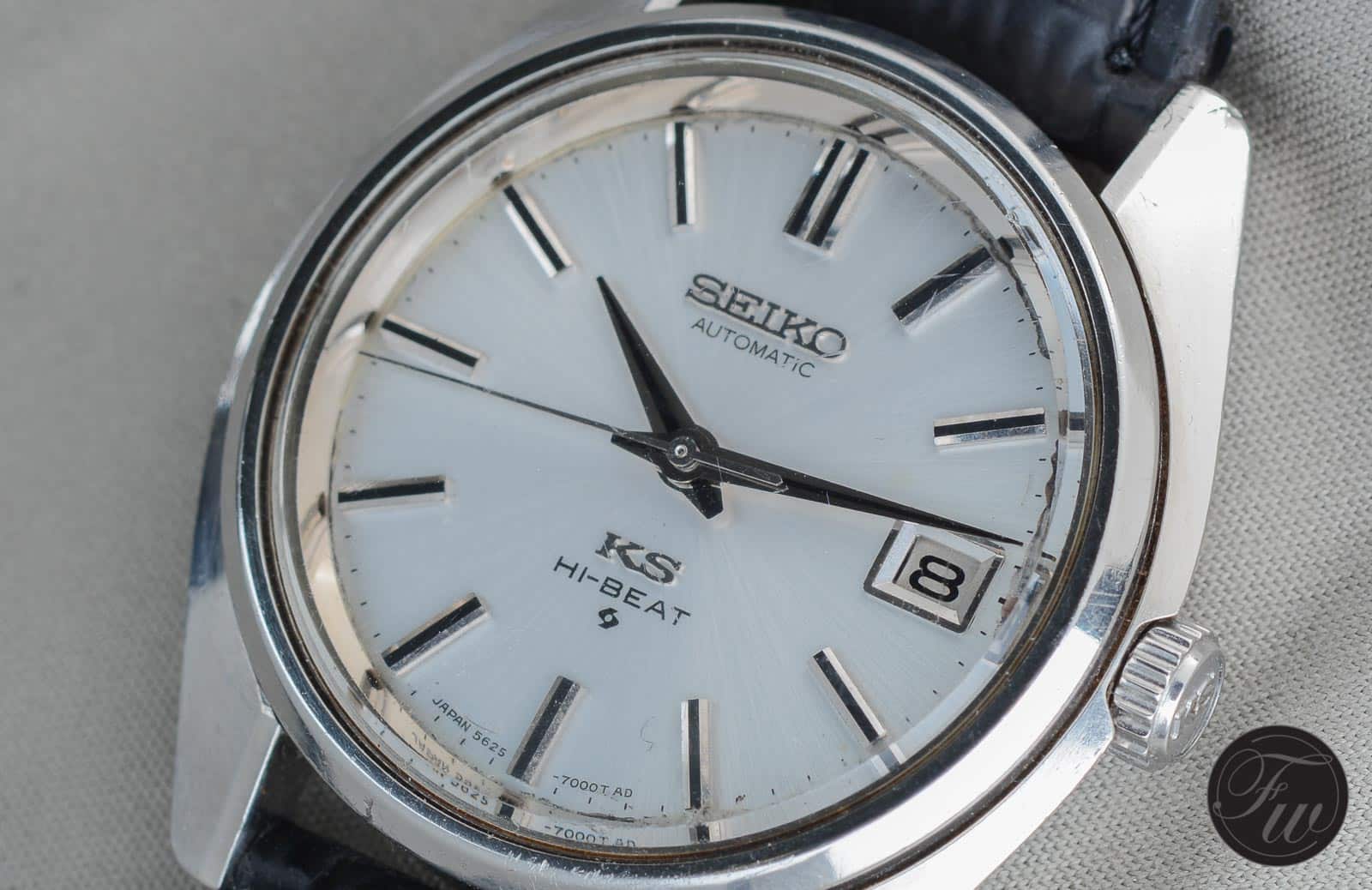 As you can see, the dial of my King Seiko 5625-7000 has a bit of smudge on it around the rehaut. Especially between the 1 o’clock marker and 3 o’clock, this is something that needs a thorough clean. Nothing that can’t be done.

The case has this typical (King) Seiko shape and can also be found in some Grand Seikos. To me, this is what this watch makes so special. It makes it stand out from the crowd of Omega Constellations and Longines Conquest watches of that time for example. It has a wide case body and long lugs. The watch only measures approx 36mm in diameter, but wears a bit bigger. Especially due to the lugs, a bit ‘longer’ on the wrist. The crown is signed KS. In position 1, you can advance the (quick-set) date. In position 2, you set the time. 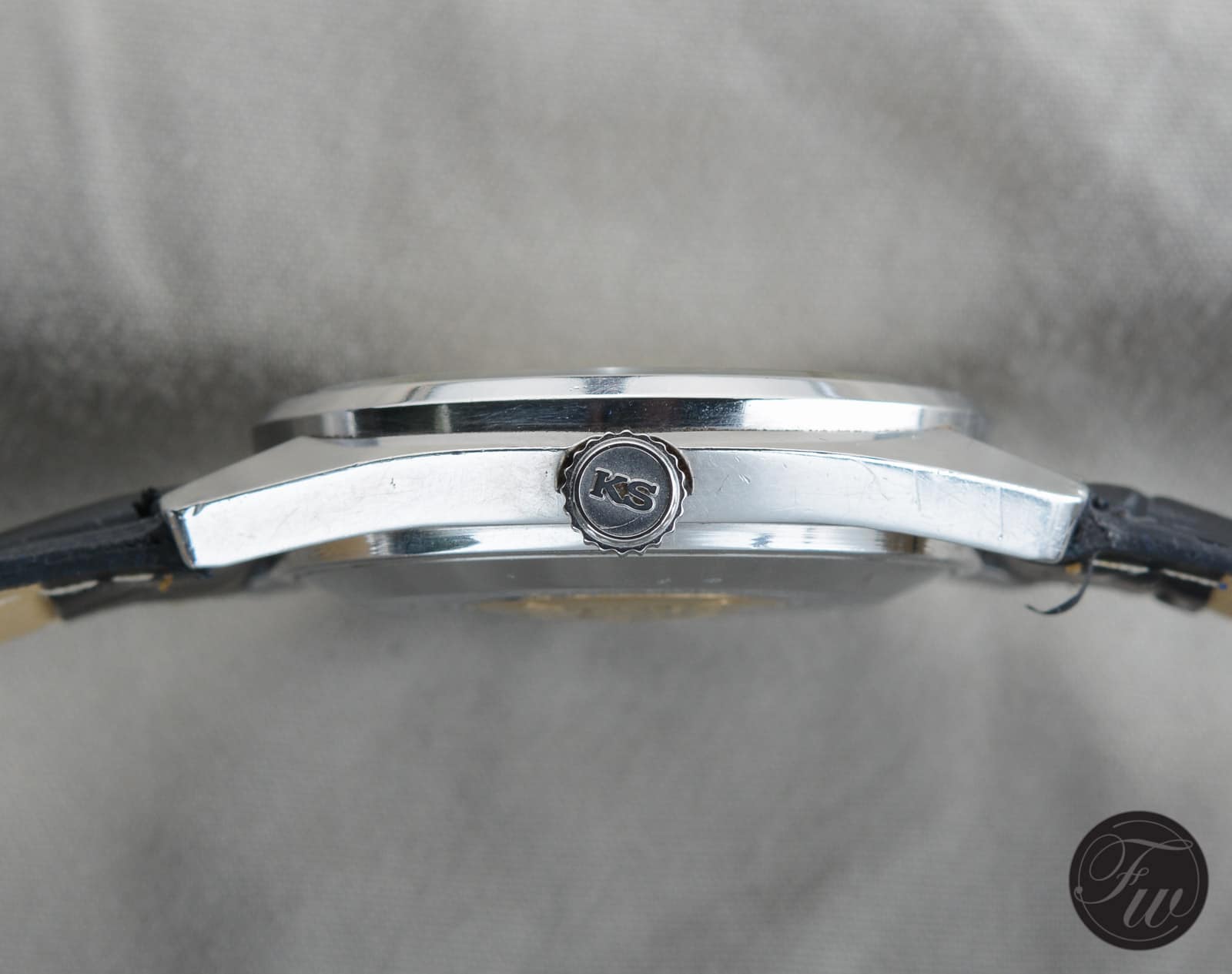 The caseback shows all the necessary information. It also has this KS emblem in gold in the center, a medallion. Here, you find the reference number of the watch and the serial number. The serial number can be used to find the production year and month of the watch. Mine starts with 95xxxxx which means 1969 and May. 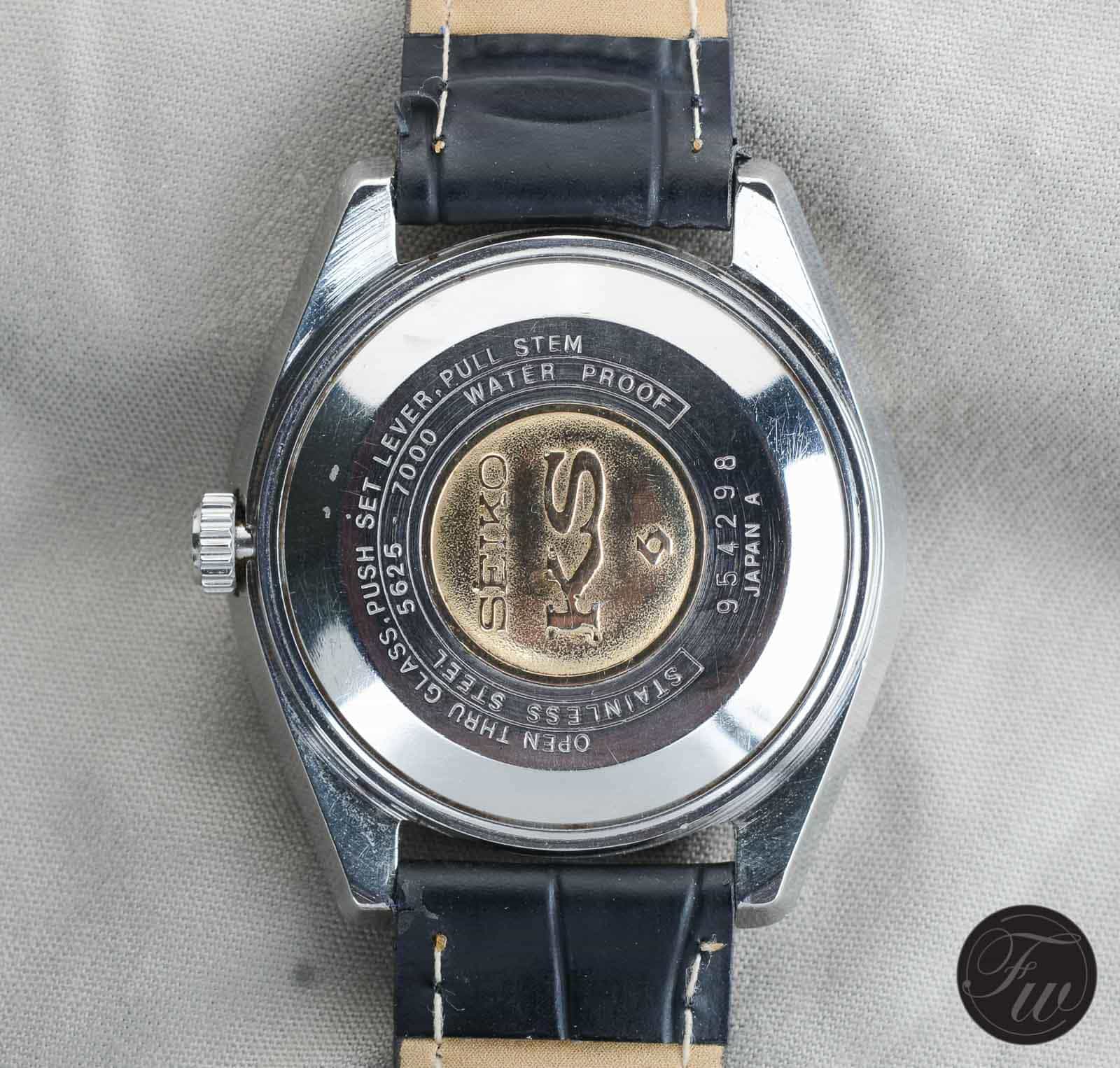 Inside is Seiko caliber 5625A, a movement with fine-regulation and a self-winding mechanism. I’ve found an image of the movement on this forum, so credits to Axel for taking the picture. As you can see below, a no-nonsense movement that does the job (right). 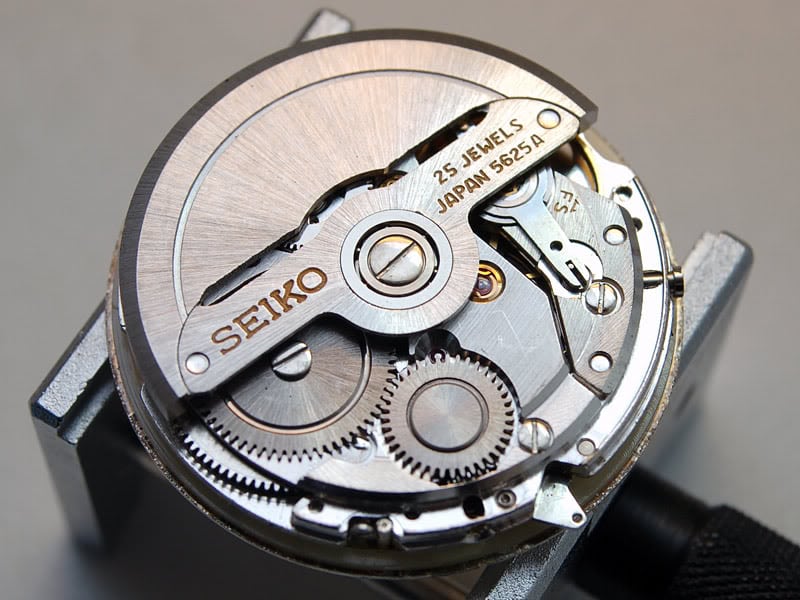 These movements were developed and constructed to be as precise as possible, which was a big thing back then for Seiko. As it still is now (think Grand Seiko 9S and 9F and the Astron). From what I understood, only the first King Seiko watches were chronometer rated, before the Swiss decided the Japanese couldn’t play. Since a lot of documentation is not in English, it is a bit difficult to be very sure on this though. Our watchmaker and friend of the show, let’s call him Paul, sent me a couple of images of the caliber 4500A/4502A movements in the King Seiko 45-7000 watches. Now look at the movement on the right. 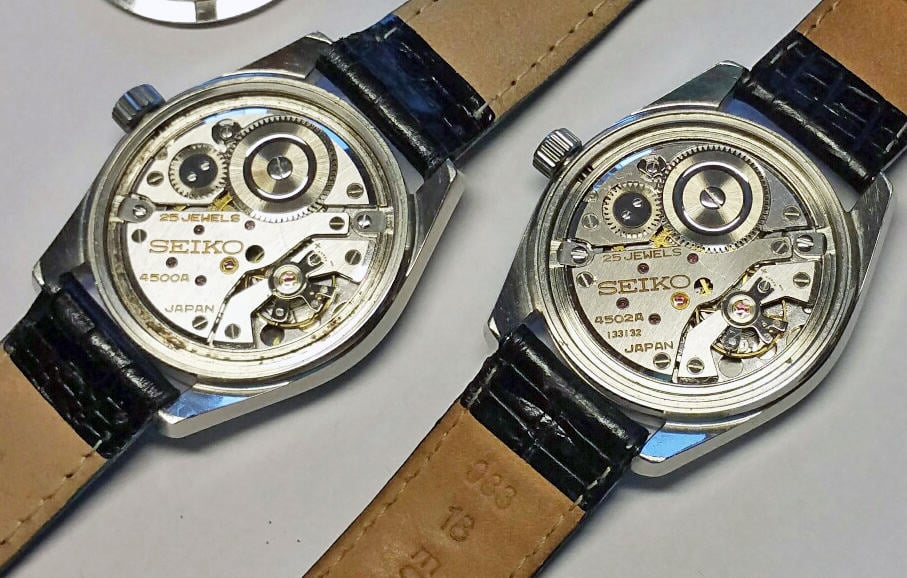 You notice the 6-digit number on the main plate, below the caliber number and ‘JAPAN’. That’s the chronometer number. This means that even when it’s not printed on the dial (‘chronometer’ was just used very briefly on the very first King Seiko models), some watches are actually certified but you’ll only find out when opening the watch. 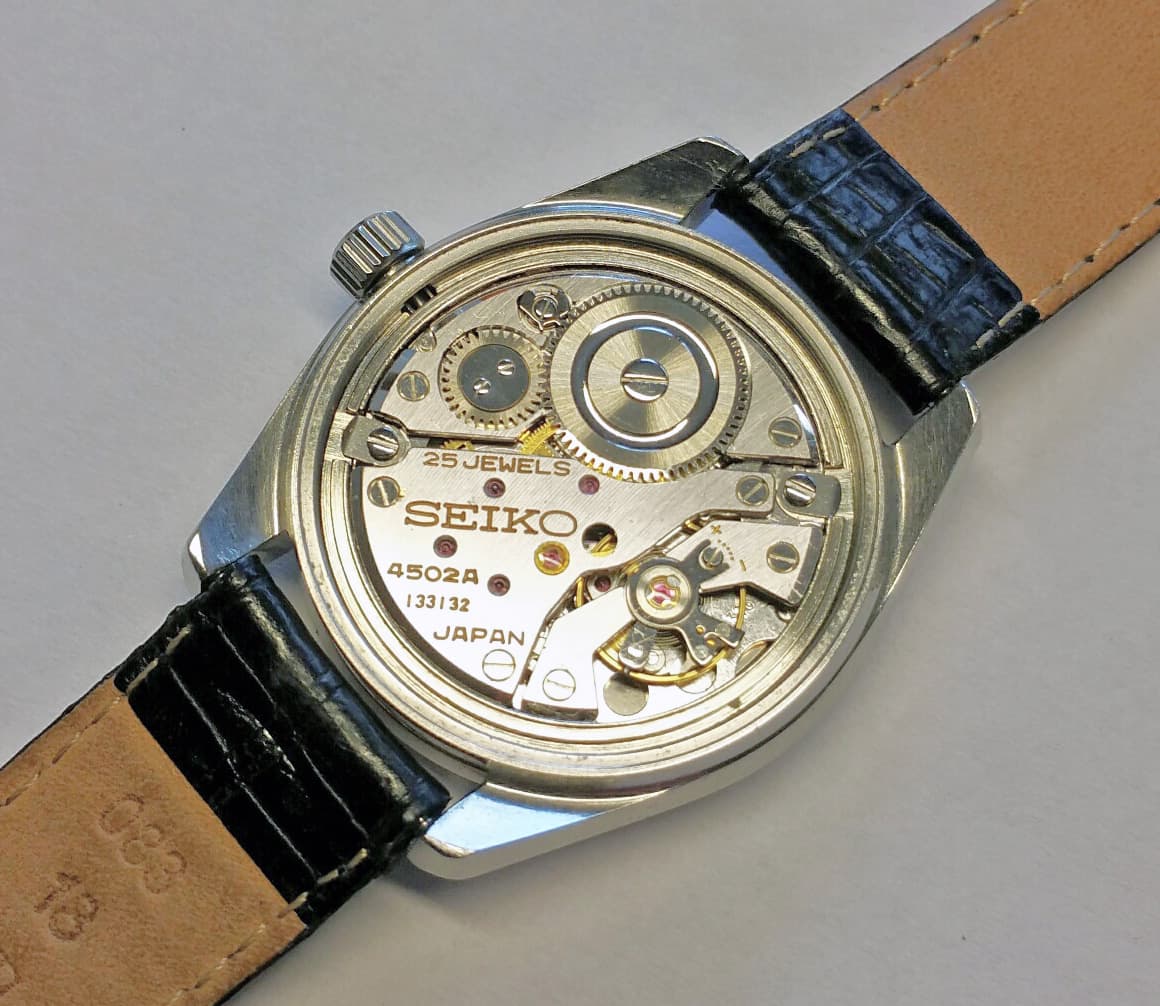 As I’ve often wrote here, a watch doesn’t need to have a x-thousand price tag to be fun. Last week we showed you 13 new watches under 1000 Euro, but don’t forget about the vintage possibilities. I found this watch for under 300 Euro and despite the fact that it needs a good clean and a decent strap, it is a lot of watch for that money.

Admitted, it is a small watch for my fairly large wrists, but as the beautiful King Seiko lugs are long, it does work. Especially when wearing cuffs. Quality-wise, I think these watches can be compared to the earlier mentioned Omega Constellations and Longines Flagship models of the same era. Precision was a big thing in those days, so these companies were very ambitious when developing movements.

So go out and hunt on eBay and some of the Seiko forums for a King Seiko. There are plenty of models to choose from, with automatic or hand-wound movement. Don’t be scared away by the bracelets that some people have put on them, a bit of dirt on the dial or scratched crystal. These things are easy to address. Make sure the crown is original, that there are no big dents in the case and no rust on hands and markers.