I believe it was somewhere in the mid-1990s till the late 1990s: I told friends and fellow students I was interested in mechanical watches, they almost all replied with “…those Kinetic watches?”. Ever since the introduction of the Kinetic movement in 1987, it became a well-known concept world wide.

However, with the revival of the mechanical movements in the 1990s and the booming interest in them since the 2000s, the popularity of the Kinetic disappeared a bit to the background for the masses. To some extent because the target audience of sub € 500 Euro watches stopped wearing watches at all since their iPhone or other smart phone tells the time. The other group of people moved on towards mechanical watches, without a battery. However, the Kinetic never ceased to exist and Seiko came up with a number of variations on the topic (e.g. Kinetic Auto Relay, Kinetic Direct Drive).

During this year’s BaselWorld fair, we sat down with Seiko and discussed the new Seiko Prospex Kinetic GMT diver watches. Prospex, which stands for Professional Specifications, is just that: Watches with professional specifications that meet the demanding requirements for divers and pilots. 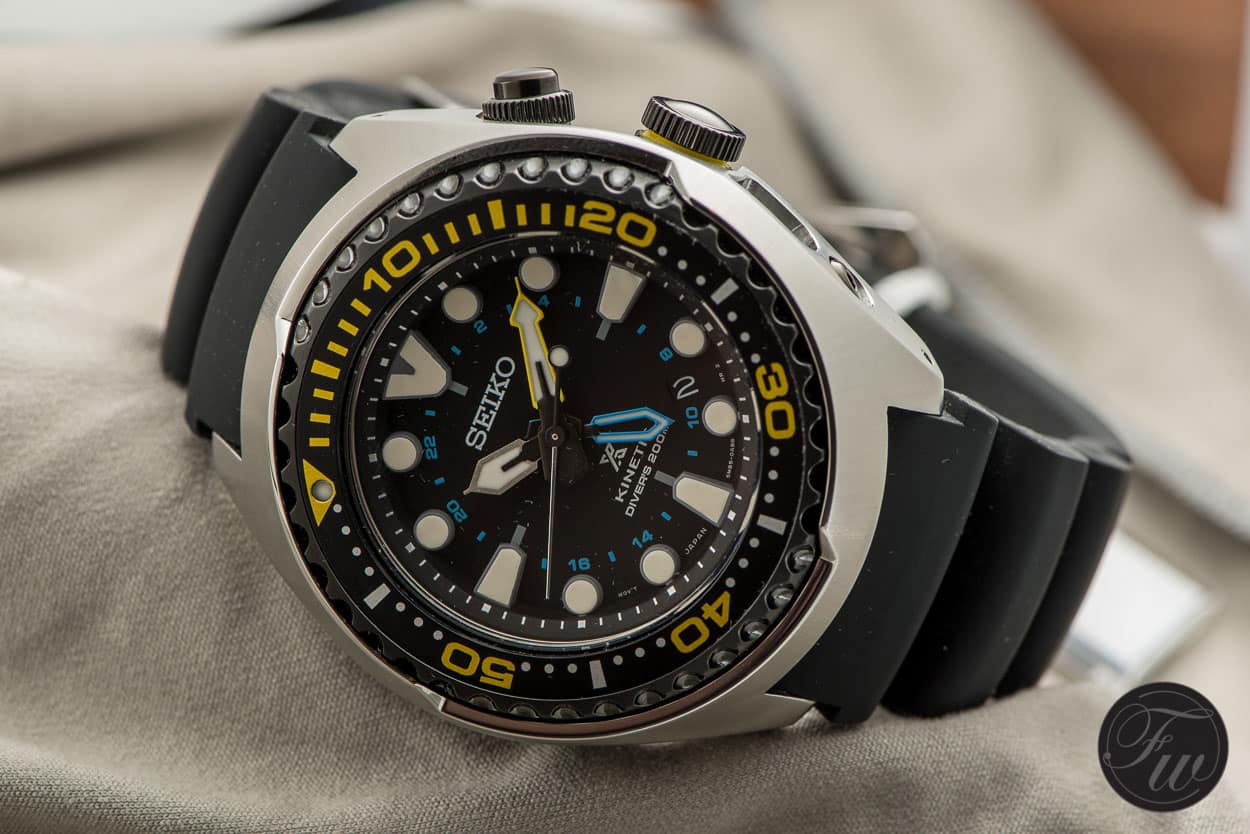 Let me start by saying that after our encounter with Seiko in BaselWorld, I decided to buy a Seiko as well. My first Seiko actually, I am probably one of the few people out there that never had a Seiko watch. I decided to buy a Prospex watch as well, the Seiko SBDC001 (that I reviewed here). I was – and still am – amazed by the quality of that Prospex watch, especially for the amount money you have to bring along. Unfortunately I wasn’t able to purchase it at the local Seiko boutique, as Seiko decided that not all models are ready for export to certain countries (yet).

The Prospex I own has a normal mechanical movement whereas the Seiko Prospex Kinetic GMT has this movement that combines mechanical and quartz technology. The kinetic movement is being converted into electrical energy, in a nutshell. Since this Kinetic technology has been there since 1987, I don’t feel that it needs much explanation. In case you want to, here is a bit more info on the Seiko Kinetic history and technology. 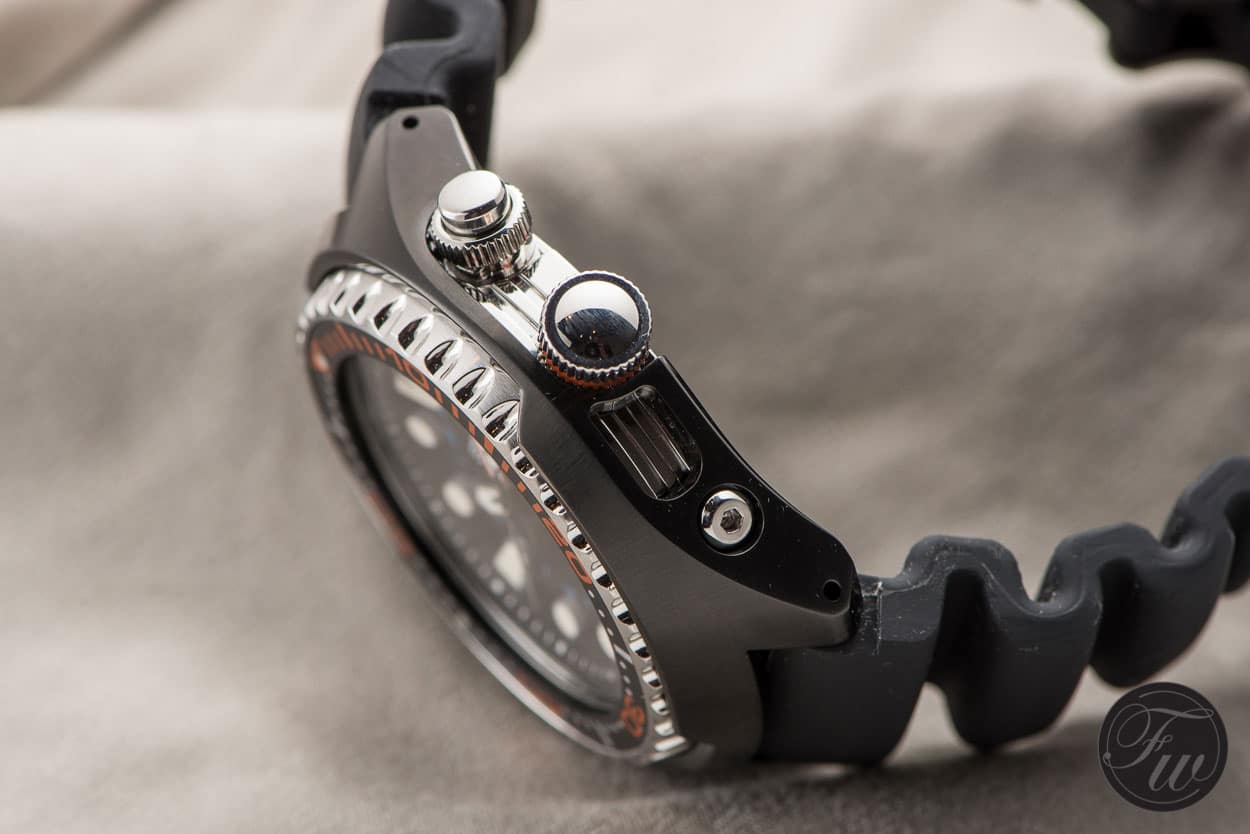 This new Seiko Prospex Kinetic GMT Diver has a very nice (double) case, equal to the model from 1975. I love the way they embedded the uni-directional bezel into the stainless steel case. The diameter of the case is a whopping 47.5mm so not for the weak-hearted. However, for a diving watch I’ve to say that it didn’t seem out of proportion somehow. The case is very interesting as it has this inner and outer case construction. You can clearly see this on the picture above, where you can see the watch from the side.

As the Seiko Prospex implies ‘professional specifications’, the water resistance is indeed a guaranteed 200 meters, the watch has a sapphire crystal (instead of the Hardlex crystals you see on some models) and an accuracy with a maximum deviation of 15 seconds per month. Although we show you the pictures of the model with a rubber strap in this article, the watch is also available on a stainless steel bracelet with folding clasp and a secure lock system.

The Kinetic GMT movement is caliber 5M85 and features (obviously) a GMT complication. The extra (24) hand is very easy to adjust by the wearer. Also, the Kinetic system results in a power reserve of a whopping 6 months when the watch isn’t being used.

Perhaps one of the most interesting aspects about this solid Seiko Prospex Kinetic GMT is the price tag. The list price of the watch was set to 600-660 Euro (for Europe), $675-$695 USD for the USA (don’t ask me about the strange  difference between Euros and USD). The SUN019 is the model on a stainless steel bracelet (not pictured here), the SUN021 is the model with the yellow accented dial and the SUN023 model is the one with the orange accented dial and black casing.

The question is, would I buy a Kinetic watch? It is not entirely a mechanical watch as you know. Does it lack the soul of a fully mechanical watch? Perhaps it does, but your movement will make this watch come alive in any case so there is certainly a bit of bonding between the watch and the wearer. The price is the decision maker in this case and for $675 USD I would go for one of the models with the rubber strap.

Would it be a +$1000 USD watch? I would take my money to buy something fully mechanical. Seiko has to offer enough in that field as well, like the Seiko Marine Master Professional 300M (SBDX001). You probably do not buy a better (new!) watch for this kind of money, I am pretty sure. Unfortunately, Seiko has decided to post pone the delivery of these models for the European market for now.

If these watches will become available and are as easy to purchase as a Swiss watch, some of the Swiss brands will definitely see a piece of their action go to the biggest watch brand from Japan. 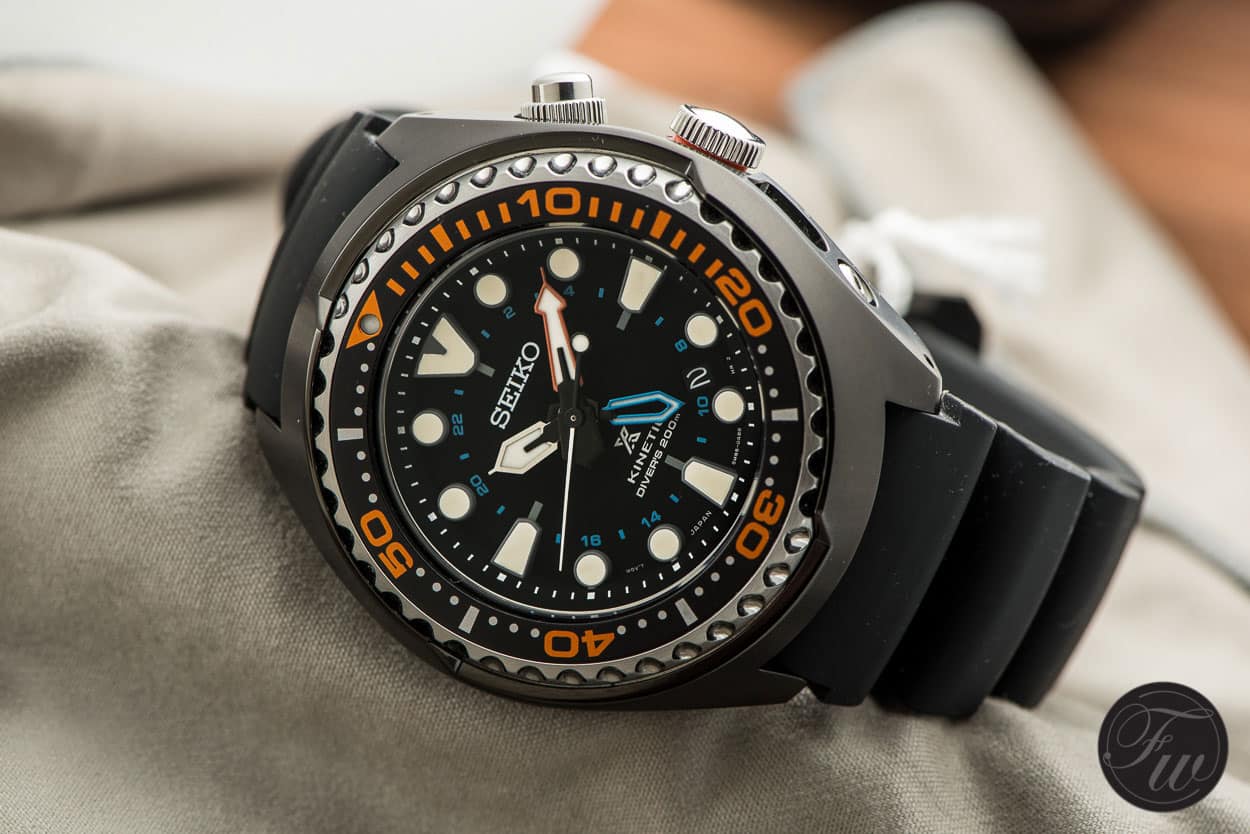