Just when we think we’ve discovered every TV/watch tie-in, someone unearths a previously unknown connection. Today’s #TBT is the perfect example of great sleuthing as we’ll be taking a look at the Seiko 5126-8090 Kamen Rider from March of 1968. Today’s story is a rather Japanese one and it just so happens to feature one of my favorite vintage Seiko’s. 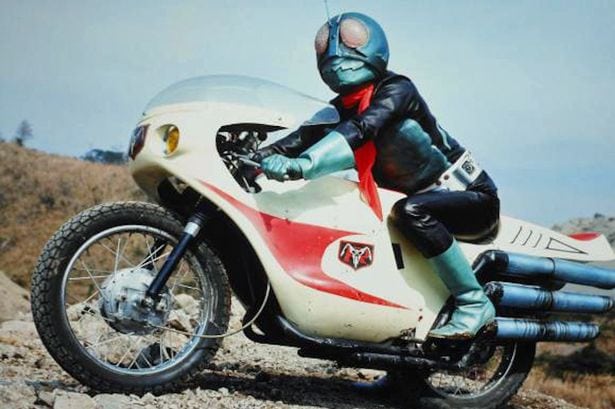 We’ll explain the very foreign nickname given to the Seiko 5126-8090 Kamen Rider shortly, but (spoiler alert) it references an early 70’s Japanese tokusatsu TV show. According to Wikipedia, tokusatsu is a genre of live-action film that goes heavy on special effects and is often associated with sci-fi, horror, or fantasy. Godzilla likely ranks as the most popular example of the style and, in my mind, things became even more exemplary when Mothra entered the fray. For watch nerds (and Fratello readers), Ultraman is another shining example of tokusatsu. Regarding Kamen Rider, this was a TV show that ran from 1971-1973 and it’s made several reappearances since the original series. 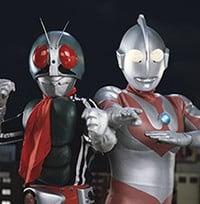 Oh, and in the vein of Mothra vs Godzilla, there was even an Ultraman vs Kamen Rider film! Truth! 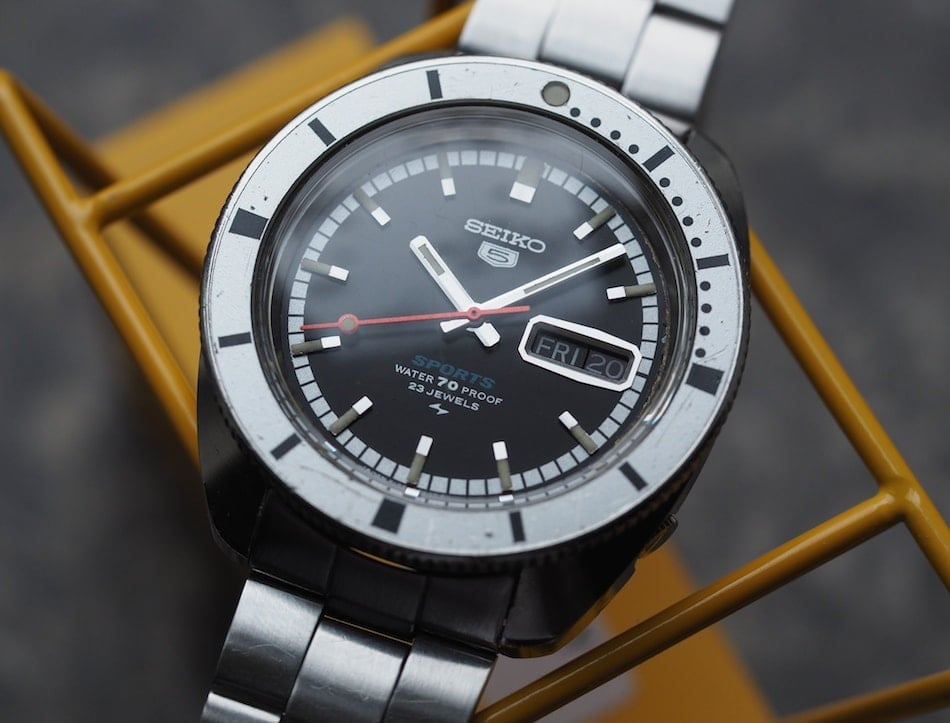 The premise of Kamen Rider (“Masked Rider” in English) was pretty wild. Apparently, a bunch of ex-Nazi’s decided to band together as a criminal organization named “Shocker”. Shocker’s goal was, of course, to take over the world by transforming normal people into cyborgs who acted as their agents of evil. The hero of the series, the Kamen Rider, was spared before the final transformation, escapes and he then dedicates his life to fighting Shocker. You simply can’t make this stuff up – well, someone did. As per typical with these crazy Japanese series, the cars and equipment are futuristic (in a campy way) and the characters possess all sorts of crazy abilities. I don’t know about you, but this sounds a hell of a lot better than Mannix. Anyhow, the protagonist, played by Hiroshi Fujioka, wore what we now know as the Seiko 5126-8090 Kamen Rider when he wasn’t dressed in his superhero garb. 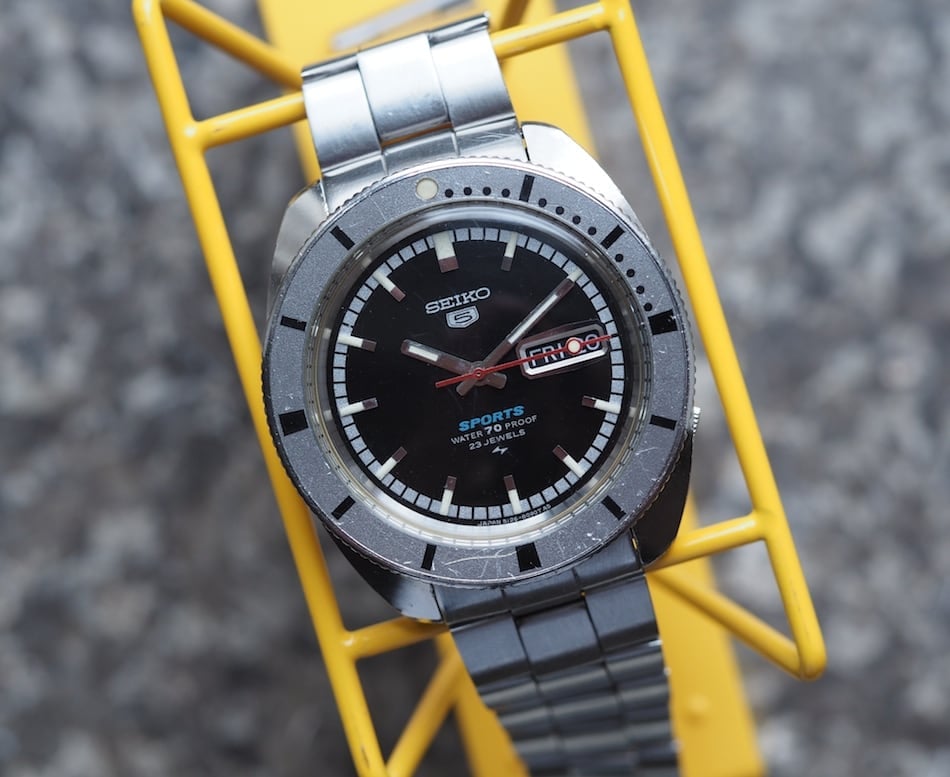 I’m not exactly sure when the Seiko 5126-8090 Kamen Rider was first exposed as having a link to the TV show with the same name, but it feels fairly recent (a little research in Japanese – thanks to our friend Eric Skier, shows a mention in 2014). Needless to say, the otaku in Japan (and elsewhere) have made this watch expensive and made what was a tough watch to find even tougher. I first caught wind of the TV connection when @thetimestories left a message on one of my Instagram posts (thank you!) and I decided to investigate. I was immediately led to an excellent post on the Seiko Citizen Watch Forum by member, “Seiko Hoarder”. He does a great job of giving some background on the series, shows us the Seiko 5126-8090 on the wrist of the actor and then talks about a piece that he found and was in the process of restoring. I love discovering these types of things – especially when, by chance, I happen to own the very same reference as in the series. 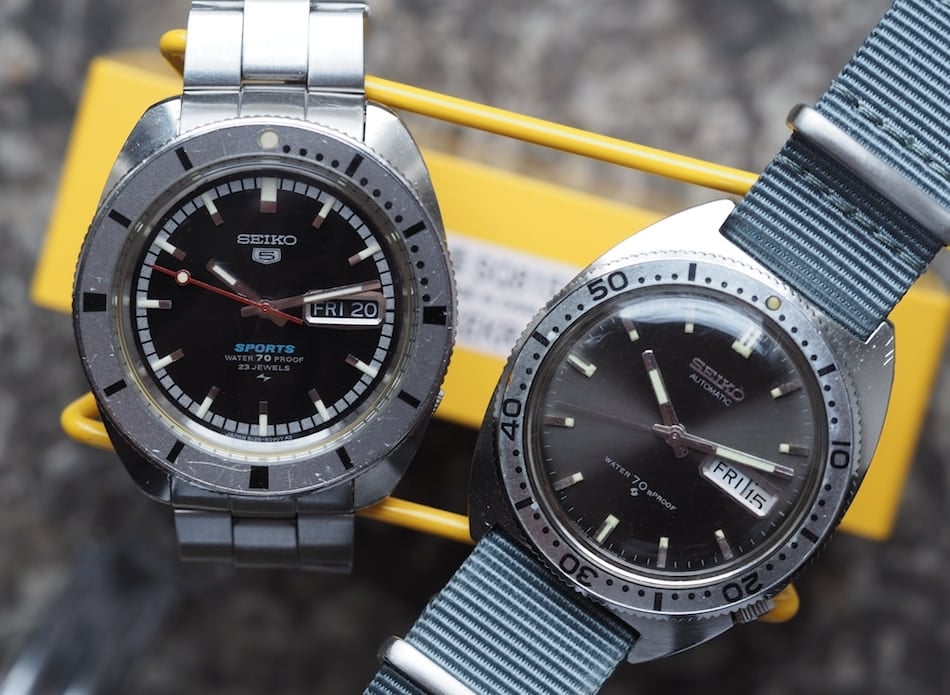 Aside from the TV show connection, the Seiko 5126-8090 Kamen Rider is a seriously cool watch. It’s an early example of a Seiko Sport Diver, a subcategory of watch from the brand that I’m on record for having more than a slight addiction (see above and below). 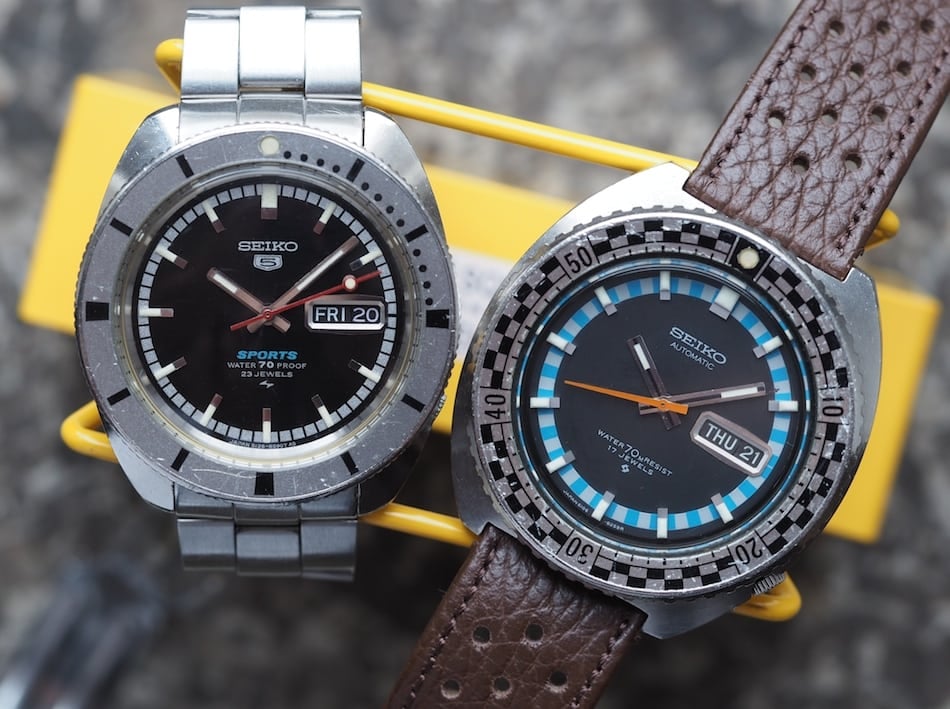 These 70M “light” divers were made in many shapes, sizes, and colors from the late 60’s until the early 70’s. Both the Suwa (first) and Daini (second) factories came up with their own designs and produced some of the company’s most expressive watches during this period. I don’t own an example of every Seiko Sport Diver reference, but I’m getting damn close. This Seiko 5126-8090 Kamen Rider was on my hit list forever, but as stated, they’re tough to find. I finally rectified the situation in the Spring of 2017. 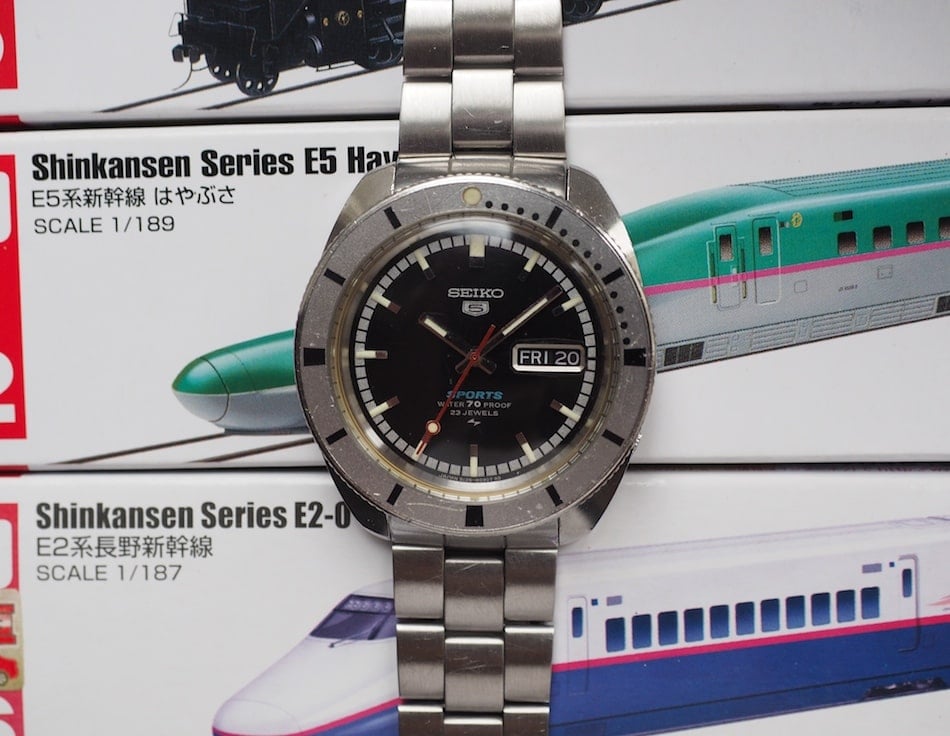 I was cruising a certain Japanese auction site and I checked for 5126’s when I came upon the Seiko 5126-8090 Kamen Rider that you see here. It looked to be in great condition and included a period (incorrect) Seiko bracelet. After some fierce bidding, I ended up winning it at a rather reasonable $350 or so. The watch arrived a short time later and, for a reference that I’d quietly pined over for a few years, it didn’t fail to meet my expectations. 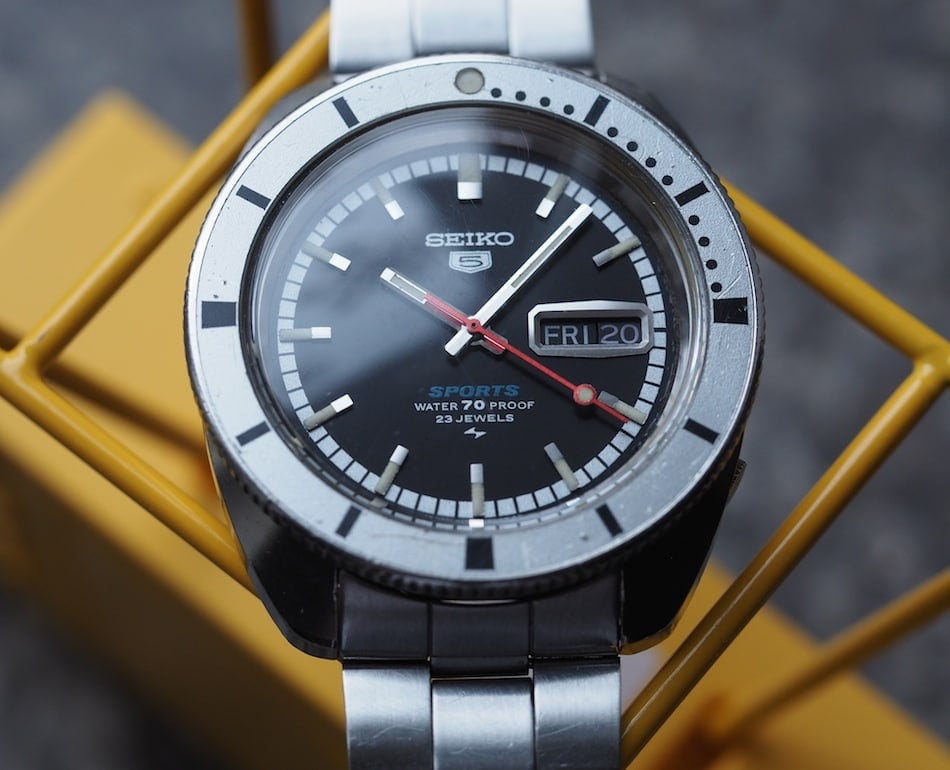 The Seiko 5126-8090 Kamen Rider, also available with a silver dial, jumps off the page due to its unique bezel insert. It’s an extremely simple affair that eschews the use of numbers and opts for thick black printed sticks at the hours and dots for the first 15 minutes. A circular pip filled with lume sits at 12:00. It’s a bold, functional look that differs from the rest of the Sport Diver lineup and it works especially well with the silvery minutes ring printed on the black dial. The metal rectangular hands contain lume and contrast well with the red sweep hand. That shiny metal is carried forth in the day/date surround and the applied indices. The writing on the dial is also subdued with just a pop of blue color for “Sports”. Of course, we’re treated to the Daini “lightning bolt” just above 6:00. The crystal on the 5126 is acrylic. Overall, the Kamen Rider looks like a vintage watch, but it’s not so retro looking that is comes off as dated. 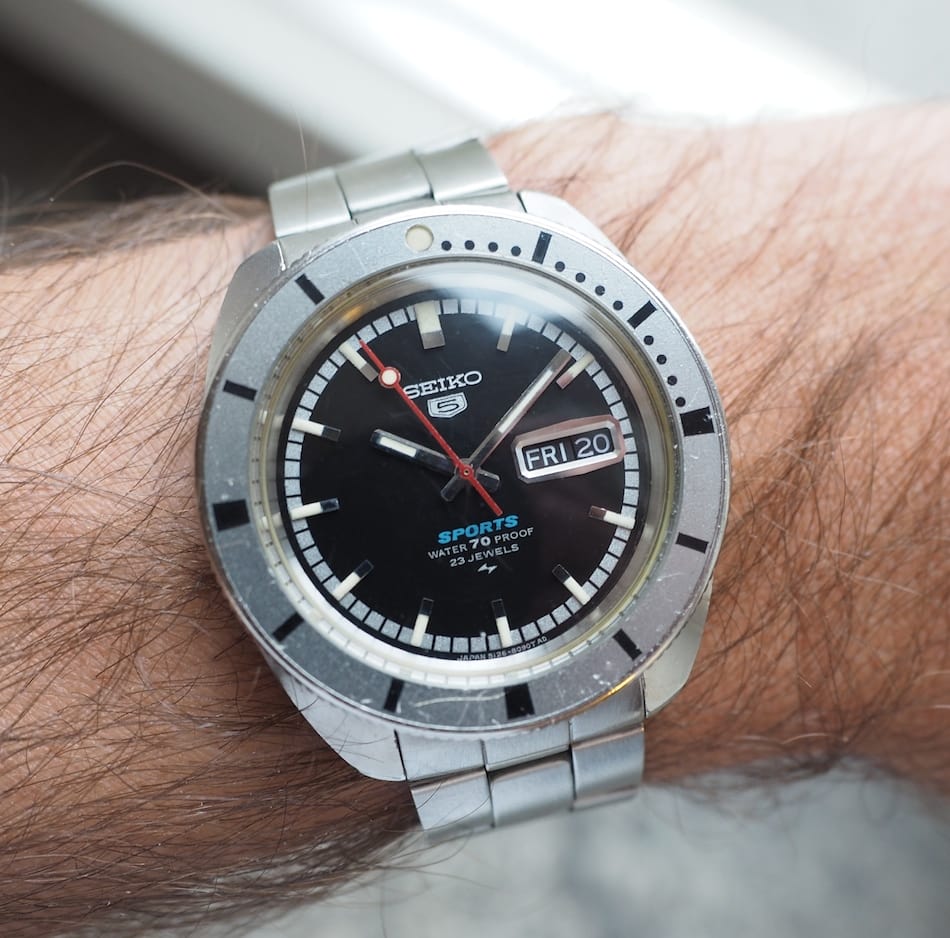 I’ll echo that sentiment when it comes to the case of the Seiko 5126-8090 Kamen Rider. It’s a light version of a “c-case”, but it’s relatively traditional in Seiko speak and it fits the wrist beautifully. Plus, while the original bracelet was a mishmash of normal links plus large plate-like links that Seiko often used during the period, I like the watch on this oyster-style bracelet. The 19mm end links fit perfectly and it’s actually comfortable to wear. At over 38mm in diameter and 43mm in length, the 5126-8090 isn’t a massive watch, but the thick bezel, 13mm thickness, and serious looks make it work on most wrists. 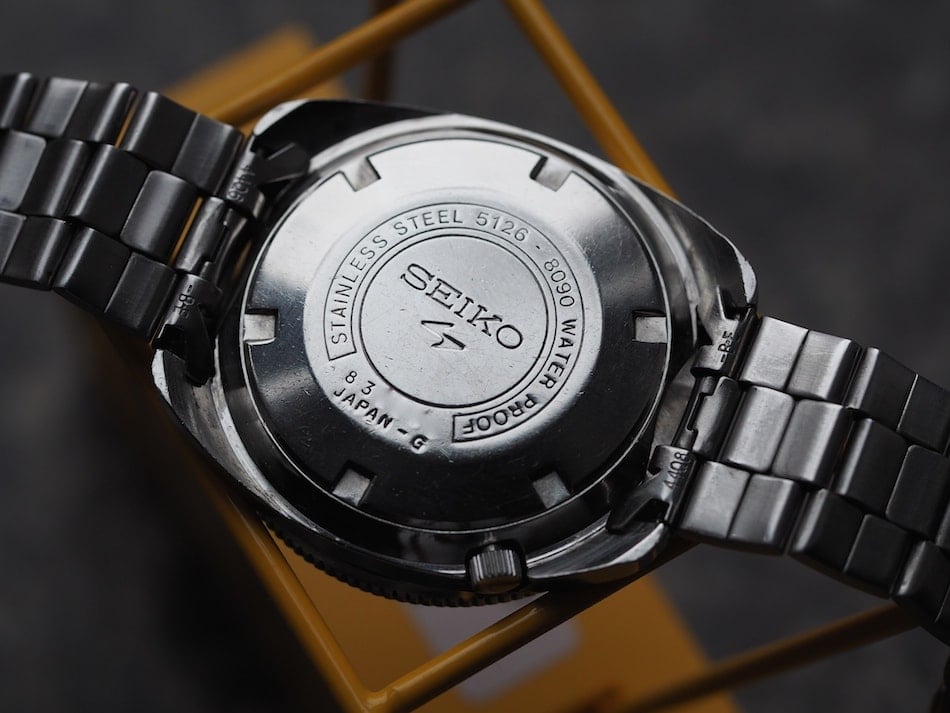 Inside the Seiko 5126-8090 Kamen Rider we have the 5126 movement. The Watch Bloke does a nice job of explaining this caliber. It wasn’t made for long and had very little to do with Seiko’s other powertrains. The linked article tells us that the style of movement is far more in the Swiss style, which is a neat tidbit of information. Functionally, the watch ticks at 19,800bph and contains 23 jewels. It cannot be hand wound, but it features a quickset (via pushing in the spring-loaded crown) date. The day isn’t quickset. From reading reports, the 5126 is known as a reliable caliber with fantastic timekeeping abilities. Its downfall is the date change mechanism, which is plastic and is known for breakage. Because the 5126’s weren’t made for long, finding a donor is a bit trickier than for other models such as the 6106 or 6119. 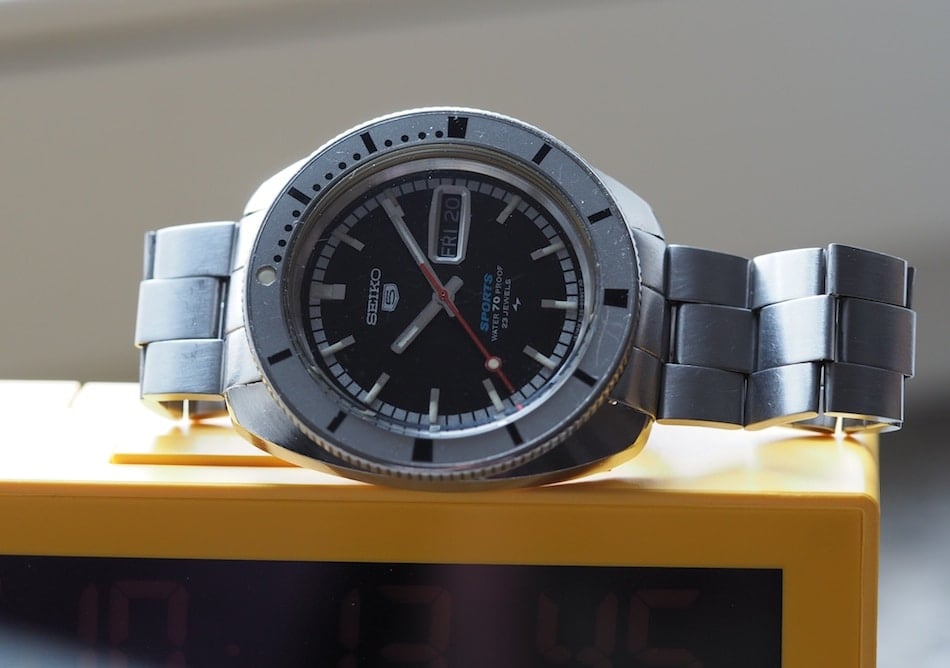 The Seiko 5126-8090 Kamen Rider is a tough watch to find. I’m not sure if they were ever officially sold in the USA, but most I see for sale now are located in Japan. They come up rarely, are often in terrible condition, or contain some modifications. Pricing, for decent examples, can easily crest $600, but luck just might score you a decent example for less. In places like the USA, an old Seiko with a scratched crystal can still fly under the radar. We’ve mentioned the mechanical Achilles heel on the 5126, but with a donor in hand, I wouldn’t avoid a non-runner or one with date issues. 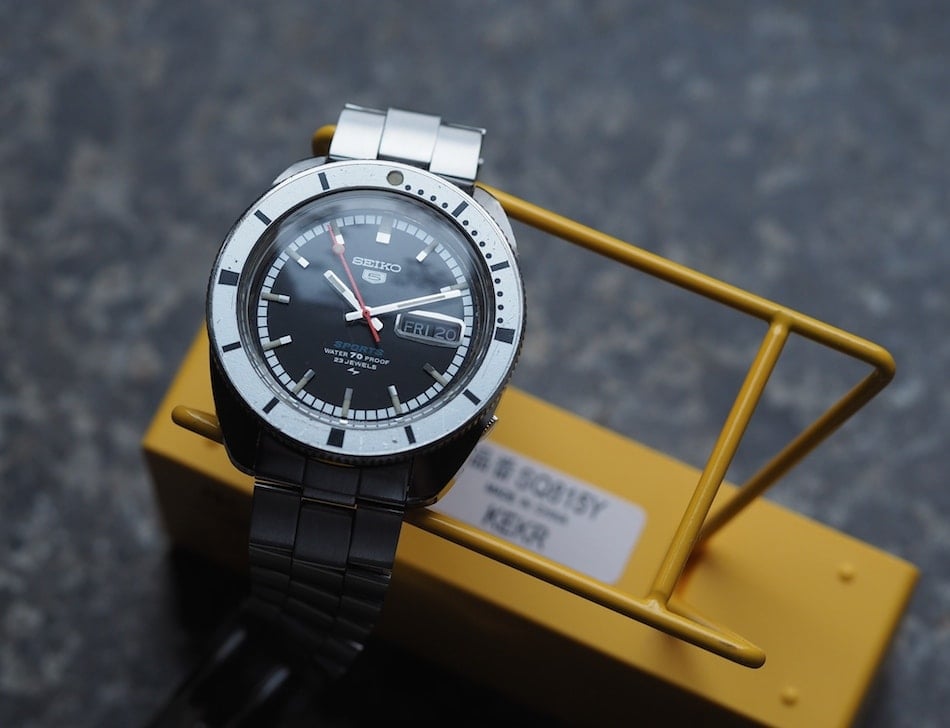 The Seiko 5126-8090 Kamen Rider is a great watch in its own right, but its tie to a well-known Japanese TV-series make it that much more special. From the Rolex Explorer 14270 to the Omega Speedmaster Ultraman, the Japanese sure featured some cool watches on the screen. The 5126 is now one more to add to the list. Until next time…