Today on #TBT, we’ll discuss the Seiko SBCM023 Perpetual Calendar Diver. Yes, it’s another Seiko, but hopefully one that you’ve either not heard of or have stumbled across a review. Plus, the SBCM023 may look very familiar upon first glance, but I think you’ll agree that there’s a lot more at work than meets the eye. If nothing else, I hope to provide a look at what can be deemed as a brief “stopgap” period of technology before something user-friendlier came on the scene. Let’s get to it… 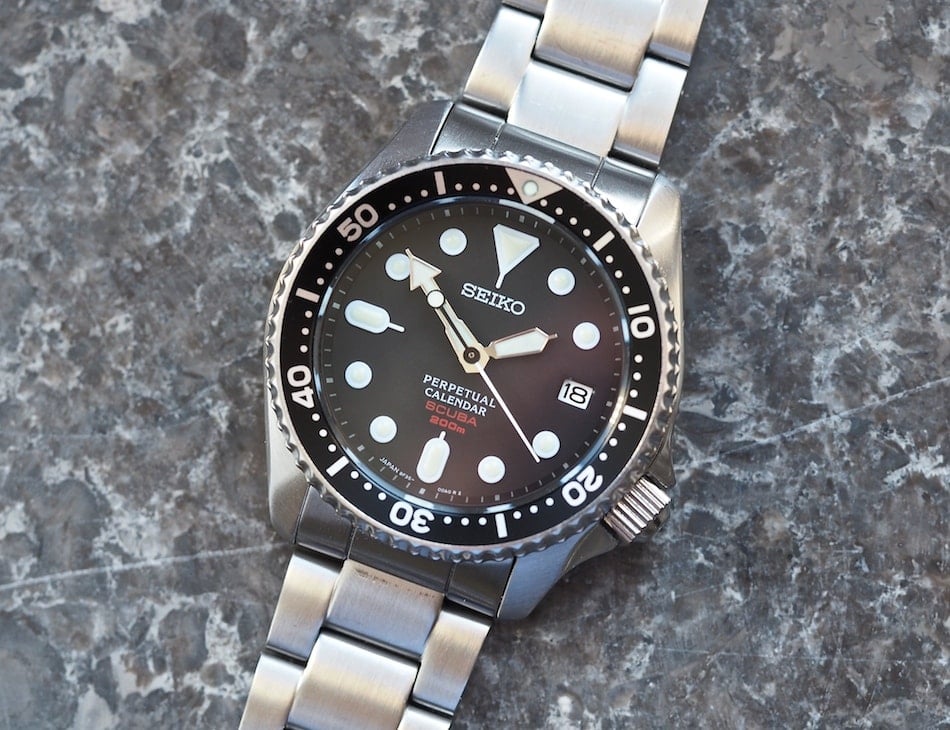 The Seiko SBCM023 Perpetual Calendar Diver is a quartz-powered 200M ISO-rated dive watch. It contains a perpetual calendar movement (caliber 8F35) that’s accurate to a jaw-dropping 20 seconds per year (normal quartz has a +/- of roughly 3 minutes per year if you were wondering) due to a high frequency oscillator that boogies at 32KHz. If you’re wondering what a perpetual calendar is, it’s a movement designed to “know” when to change dates accurately without the user having to adjust for things like leap years and those pesky months with less than 31 days. In case of this Seiko, once it is set, it will change the date correctly up until the year 2100. Sorry grandkids, you’re screwed. Oh, and the lithium battery inside will keep the SBCM023 running for up to 10 years (Seiko claims 8) before it needs to be replaced. 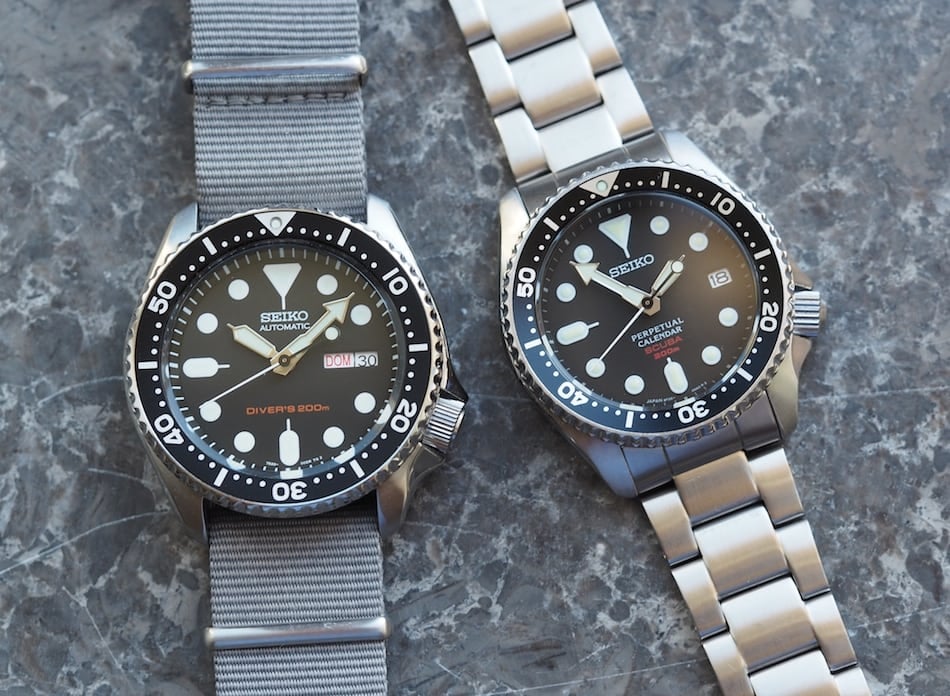 As mentioned, the Seiko SBCM023 Perpetual Calendar Diver looks an awful lot like our favorite Seiko SKX007. The stainless steel case looks the same, but it’s actually 5mm smaller than the 007’s and comes in at 39mm in diameter (more in the range of the current SKX013). The lug width is down to 20mm and strap/bracelet changes are made simple due to drilled-through lugholes. The dial also looks identical, but a keen eye will note the lack of a day wheel and that the indices are applied rather than printed. Don’t worry, the Lumibrite employed is just as ridiculous here as on other Seiko divers. The uni-directional bezel is also slimmer, but contains the exact same font as found on the well-known SKX’s. Finally, the screw-down crown is a bit more pointed at end versus the flat look most know. The 023 follows the SKX’s with its use of aHardlex crystal. 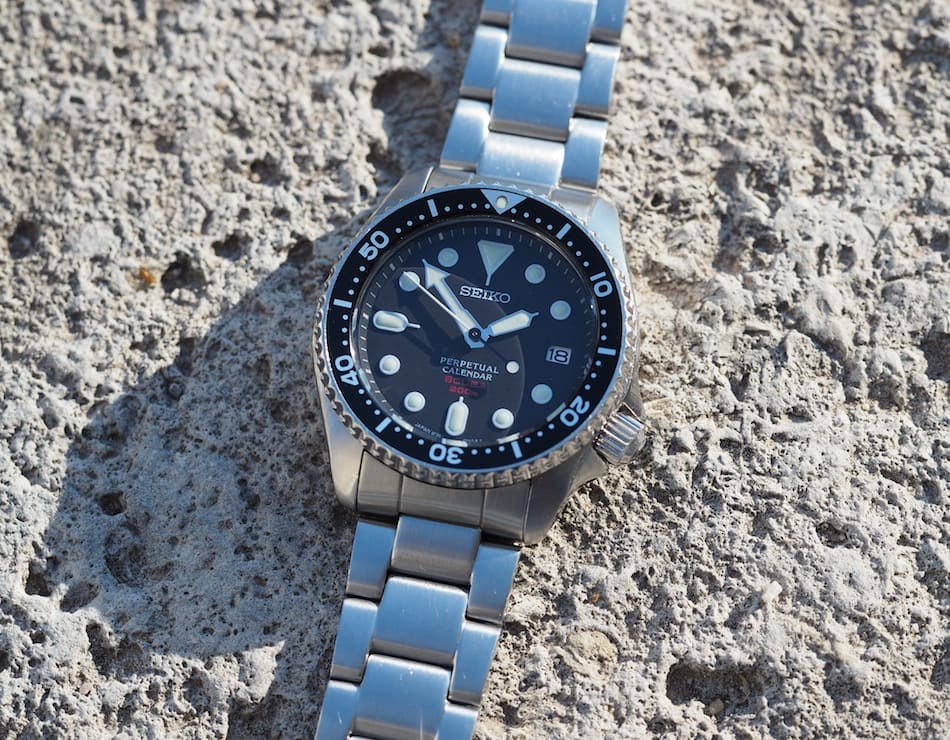 Introduced in 2003, the Seiko SBCM023 Perpetual Calendar Diver was joined by the 025 with a red & blue Pepsi bezel and an orange-dialed 029. The watches were part of the Prospex series and at least the 023 retailed at 31,500 JPY or $300 – 375 depending on the exchange rate at the time. Interestingly, this quartz series of divers were only made for the Japanese market, but word grew amongst the Seiko faithful during their production and a fair number were brought into areas such as Europe and the Americas. Perhaps Seiko felt that such an eccentric and relatively expensive movement within a modestly sized dive case wouldn’t have appealed to Westerners. Frankly, this is one time where Seiko likely made the right choice – this is an awfully specific watch. 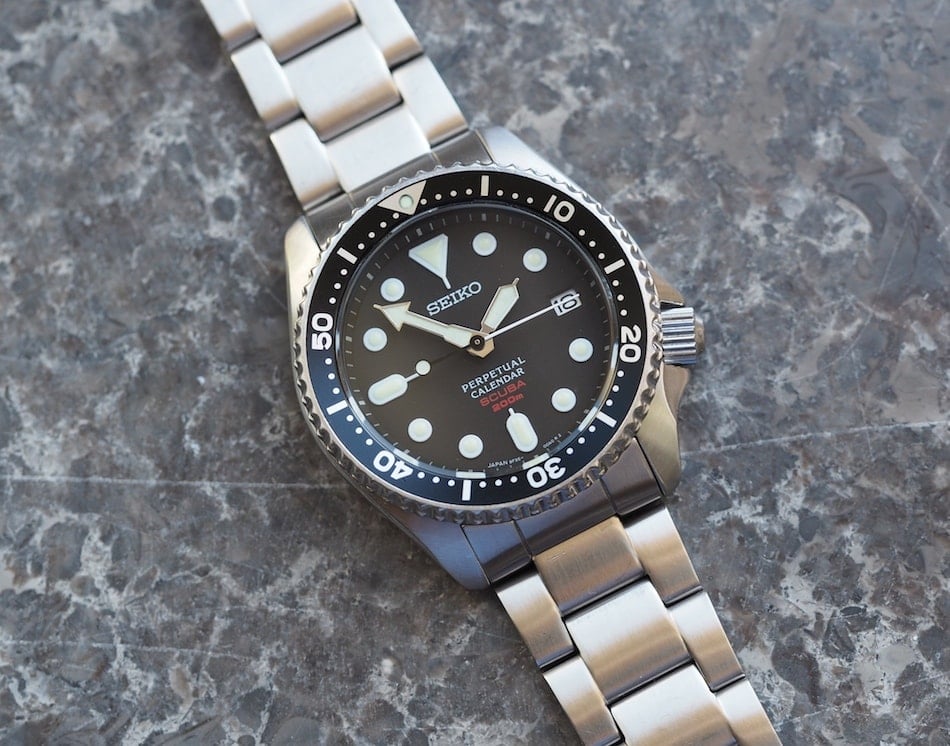 The Seiko SBCM023 Perpetual Calendar Diver was cancelled in 2010 and most feel that the primary rationale for its demise was the increasing popularity of satellite watches. These interactive GPS watches negated the need for semi-affordable high accuracy quartz movements with a perpetual calendar function. It also seems, perhaps due to price, that the SBCM-series weren’t huge sellers in Japan anyhow during their roughly 8 year run. Now, as is the case for so many retired watches, people want them. 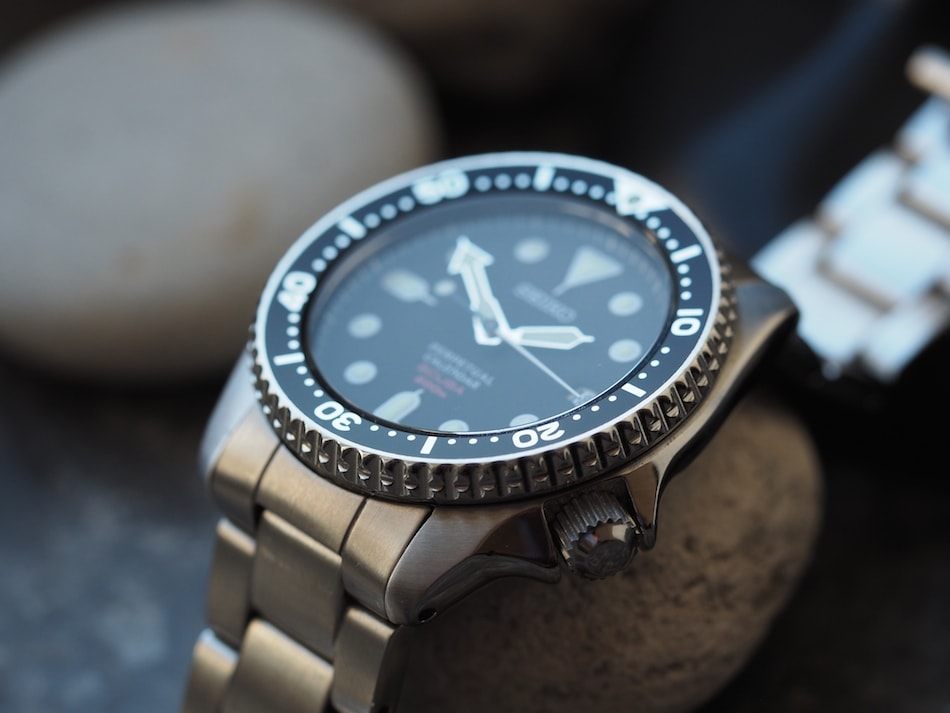 I’d been passively looking for a Seiko SBCM023 Perpetual Calendar Diver on and off for over a year when the piece you see here came up at auction in Japan. It was complete with box, outer box, papers, hang tags, etc. and I paid somewhere around $450 for it. That’s not cheap money for a quartz Seiko diver on any planet, but considering that there’s normally heavy bidding that often reaches $600 for these, I thought it was more than fair. After sizing the bracelet with its pin and collar system, I’ve been wearing it frequently. 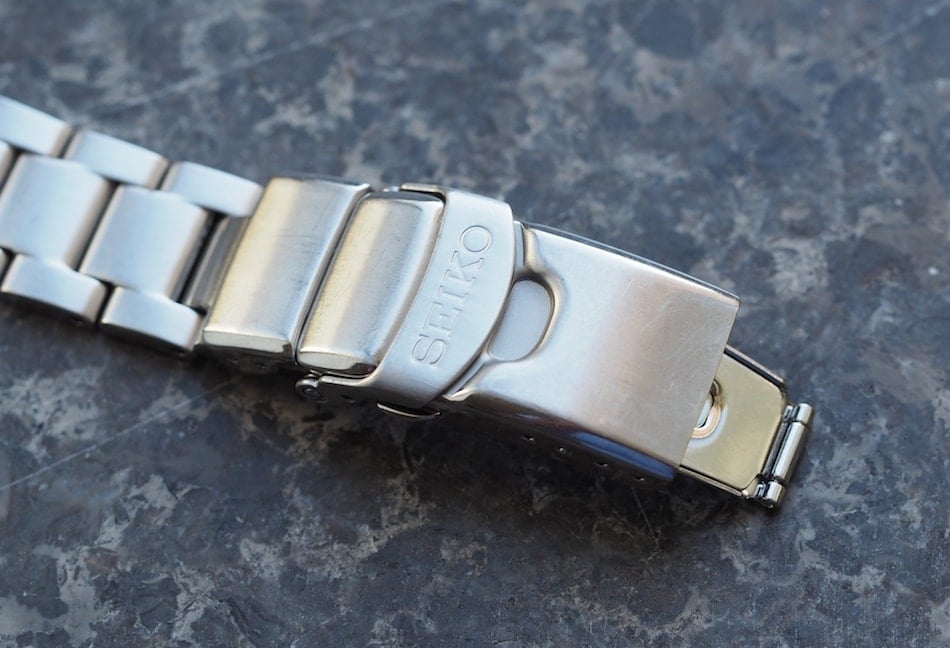 Aside from the fact that the goofy wetsuit extension on the Seiko SBCM023 Perpetual Calendar Diver often causes the fliplock to pop open, it’s a comfy Oyster-like bracelet with nice lightweight, stamped end links. We’ve mentioned this many times before, but a quartz watch can be a convenient grab-and-go piece. When it’s something a little different and made with high quality bits like this Seiko, it’s even better. 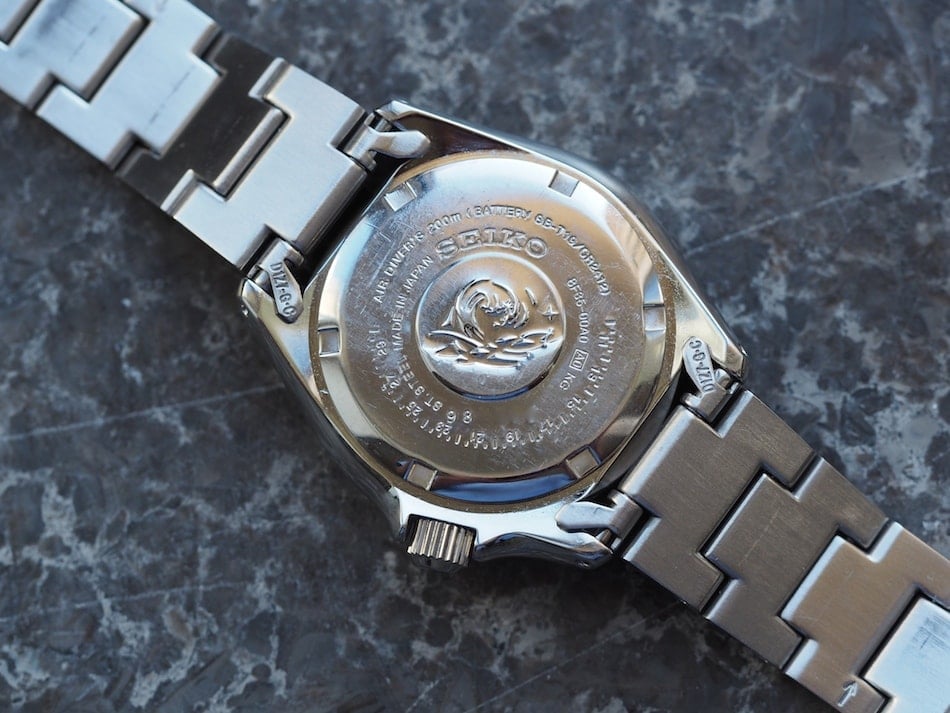 So, one thing we haven’t discussed regarding the Seiko SBCM023 Perpetual Calendar Diver is how to set the darn thing. When I received the watch, it was set correctly, but to Japanese time. Simply moving the time backwards was the same as on any other watch. Then, by popping the crown out one stop and pushing it in within a second, the watch goes through some electronic gymnastics to show the leap year with the sweep hand (I don’t quite get this) and then the date window scrolls to the month, pauses, and then changes back to the correct date. Once the battery dies – I’m guessing I have a year left as this one dates to 2009 – the actual resetting occurs under the case back. Apparently, it’s a 10-minute job including the removal of the tsunami-engraved screw-down case back, but I’ll likely leave that to the fine folks at the nearby boutique. If you’re interested, this is the user manual. 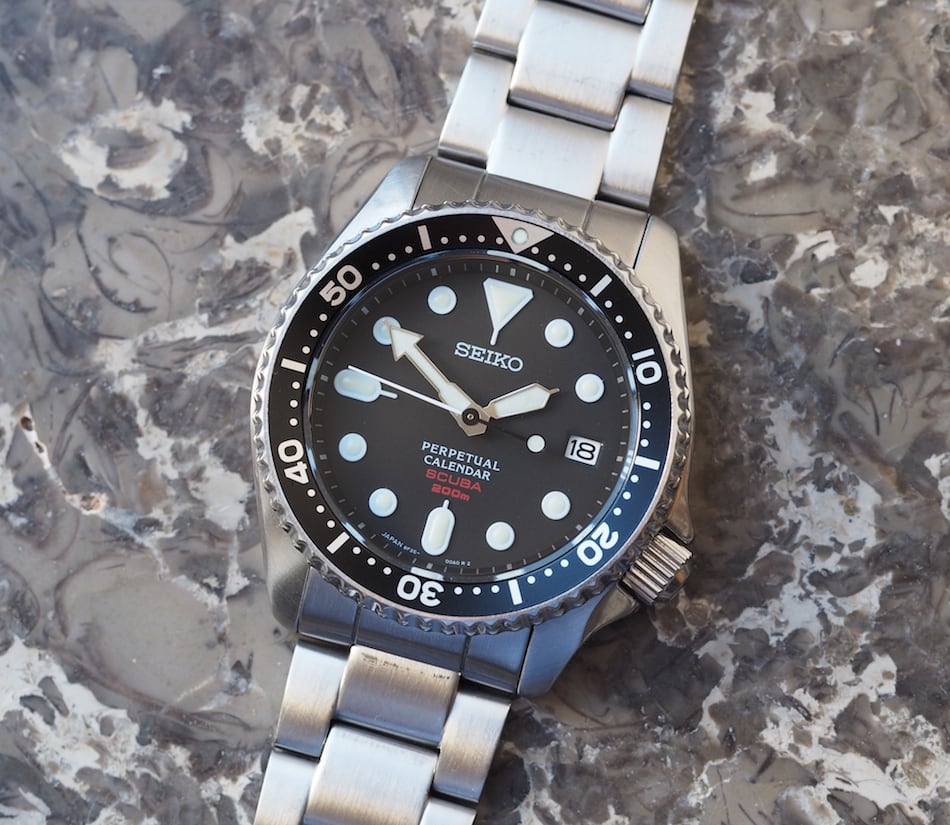 The Seiko SBCM023 Perpetual Calendar Diver is yet another example of the brand coming out with a product that was rather advanced and targeted towards what had to have been a small audience. Whether it was answering a question no one was asking is something we will never quite know, but collectors and Seikophiles seem more than interested today. Despite its familiar looks, this is a high quality diver with a novel movement that keeps time within 20 seconds a year, which makes it a fun and, still, relatively affordable addition. Until next week…

Update 4/12: Correction: Before we stated the SKX007 has been discontinued. This has been a misunderstanding and the SKX007 is definitely still in production.

Hot Topics
Introducing: The New Seamaster Professional 300M 60 Years Of Bond — With A Special Animated Case Back
105 comments
Are You Still After An Omega × Swatch MoonSwatch?
84 comments
It’s Time To Invest In A Dress Watch — Our Picks From Breguet, Omega, Grand Seiko, And More
72 comments
The Rolex Waitlist Conundrum — How Much Will The Price Of Your Watch Increase While You Wait?
50 comments
The Best Omega Speedmaster Watches Of 2022
40 comments
Popular
The Ultimate Sports Rolex – The Explorer II Reference 1655
Robert-Jan Broer
17
Certina DS PH200M – Hands-On Review
Balazs Ferenczi
23
#TBT Seiko H558 Arnie – One Serious Diver
Michael Stockton
25