Let’s call this brand new Seiko watch by its real name. No, not SRPH61K1, as much as that rolls right off the tongue. I’d rather go with the Seiko fan-bestowed nickname — the Samurai. The latest makeover of the Seiko Samurai sees the Japanese brand look to its Navy for inspiration. The Samurai as we know it today has been around since 2017. But the previous model (discontinued in 2008) came into the collection in 2004. Back then, a shorter minute hand, a longer hour hand, and a totally different seconds hand made the rounds over a flat dial housed inside the rugged, angular, titanium case. Its signature knurled crown and square profile remain to this day, even in the latest take on this staple of Seiko’s catalog.

The Samurai has previously received the PADI and “Save the Ocean” treatment. Even the black and orange livery of Seiko’s “Black Series” has graced this model’s broad-shouldered silhouette. But today, Seiko introduces a very special limited edition which is inspired by the “Suigun” — Japan’s naval armed forces. These guardians of the island nation’s coastal areas have been active for thousands of years. Traditionally, they were responsible for maritime safety, security, and ensuring that trade with nearby nations proceeded without interruption or conflict. 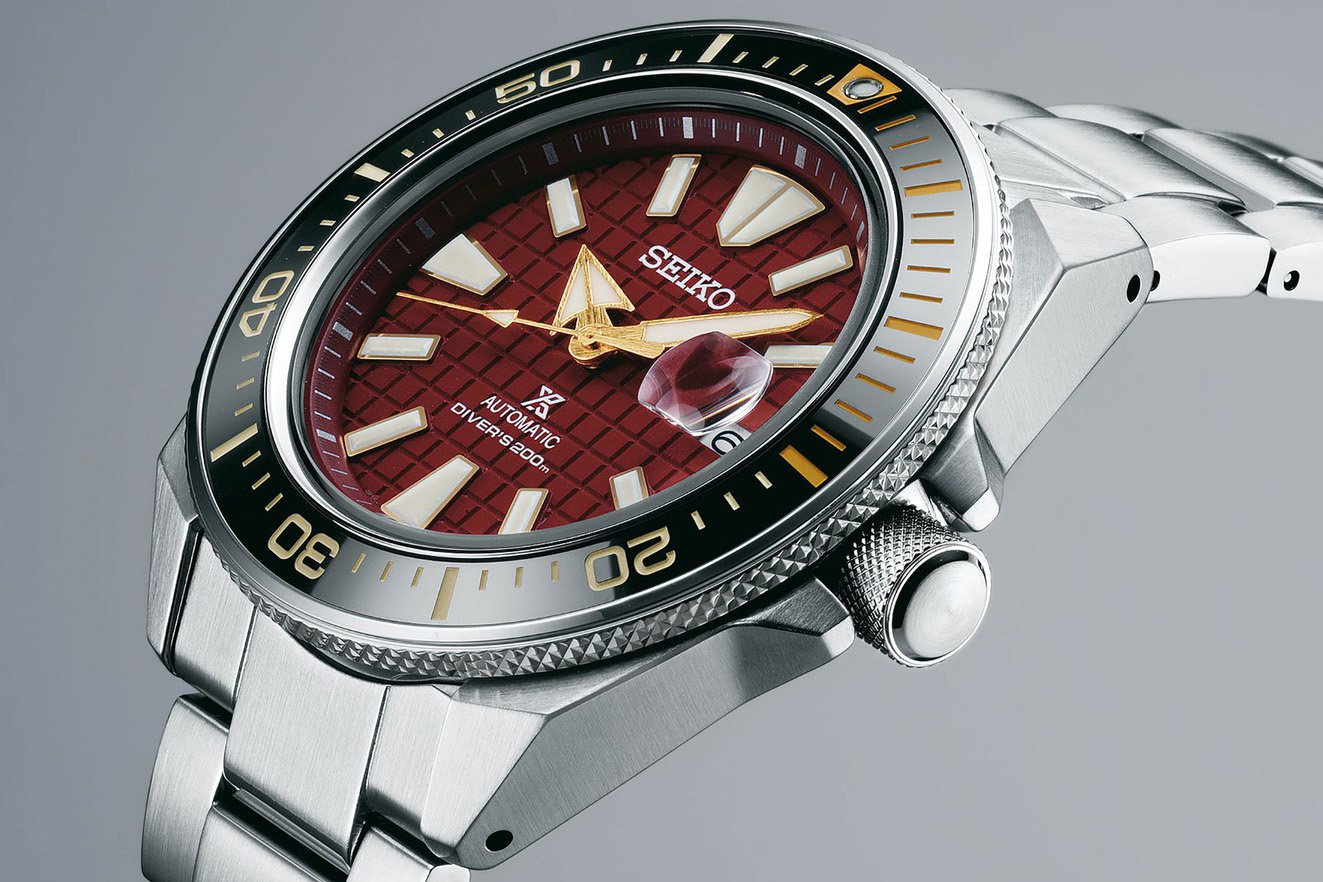 You might be asking yourself where the unique color scheme used for the latest Samurai LE comes from. Well, the clue is in the name. “Shu-iro” is a type of deep red color, used for the armor worn by the ancient Suigun naval forces. This bold color was said to display and inspire courage both in yourself as well as those who shared the battlefield with you. It is certainly a stunning choice for this tiled mosaic dial. The Shu-iro is beautifully paired with golden hands and indexes filled with white lume. A black ceramic bezel also features markings in this golden tone, giving the watch an unmistakably noble appearance. 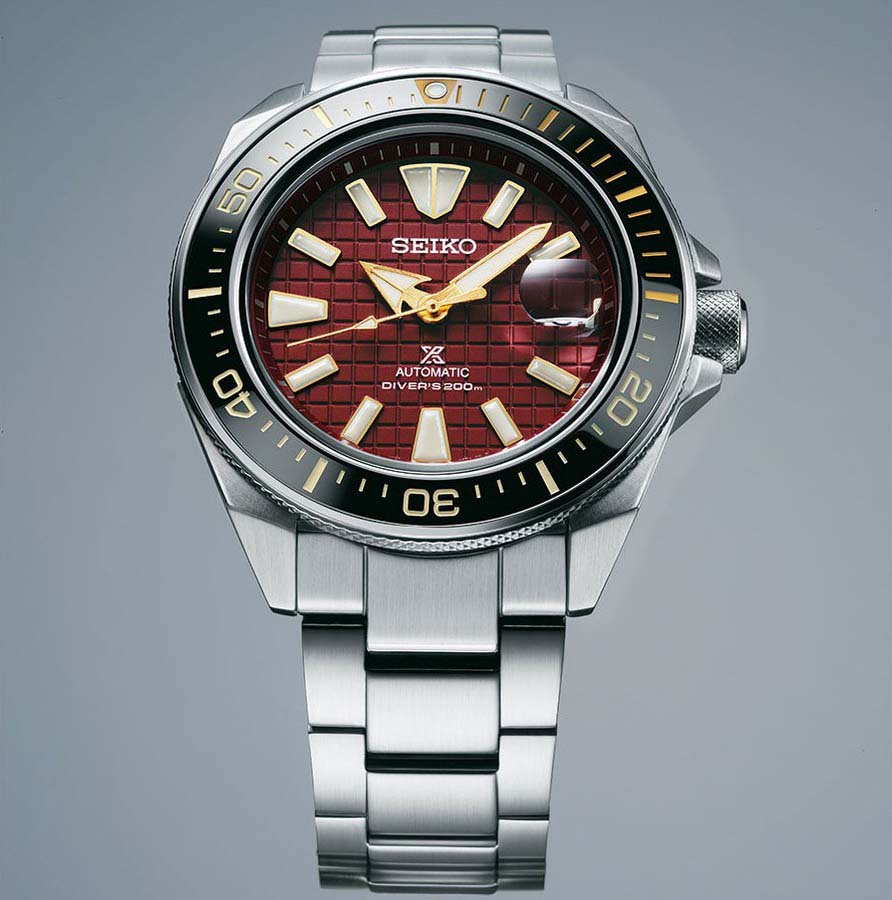 Other than that, this latest iteration features the “King Samurai” case, nicknamed such due to its more angular lugs. The bezel’s knurled edge shares the diamond grip pattern found on the hilt of a Japanese katana. Honestly, the colorway Seiko has opted for here really suits the watch. Not just in terms of aesthetics, but also in the name. There’s something about the mix of deep, dark red, gold, and glossy black that screams “Samurai.” Throw this one on a dark green leather strap with gold stitching, and you’ve got yourself a combination as sharp as the Samurai’s own blade. Inside, the automatic Seiko 4R35 beats away at 21,600vph with around 40 hours of power reserve. 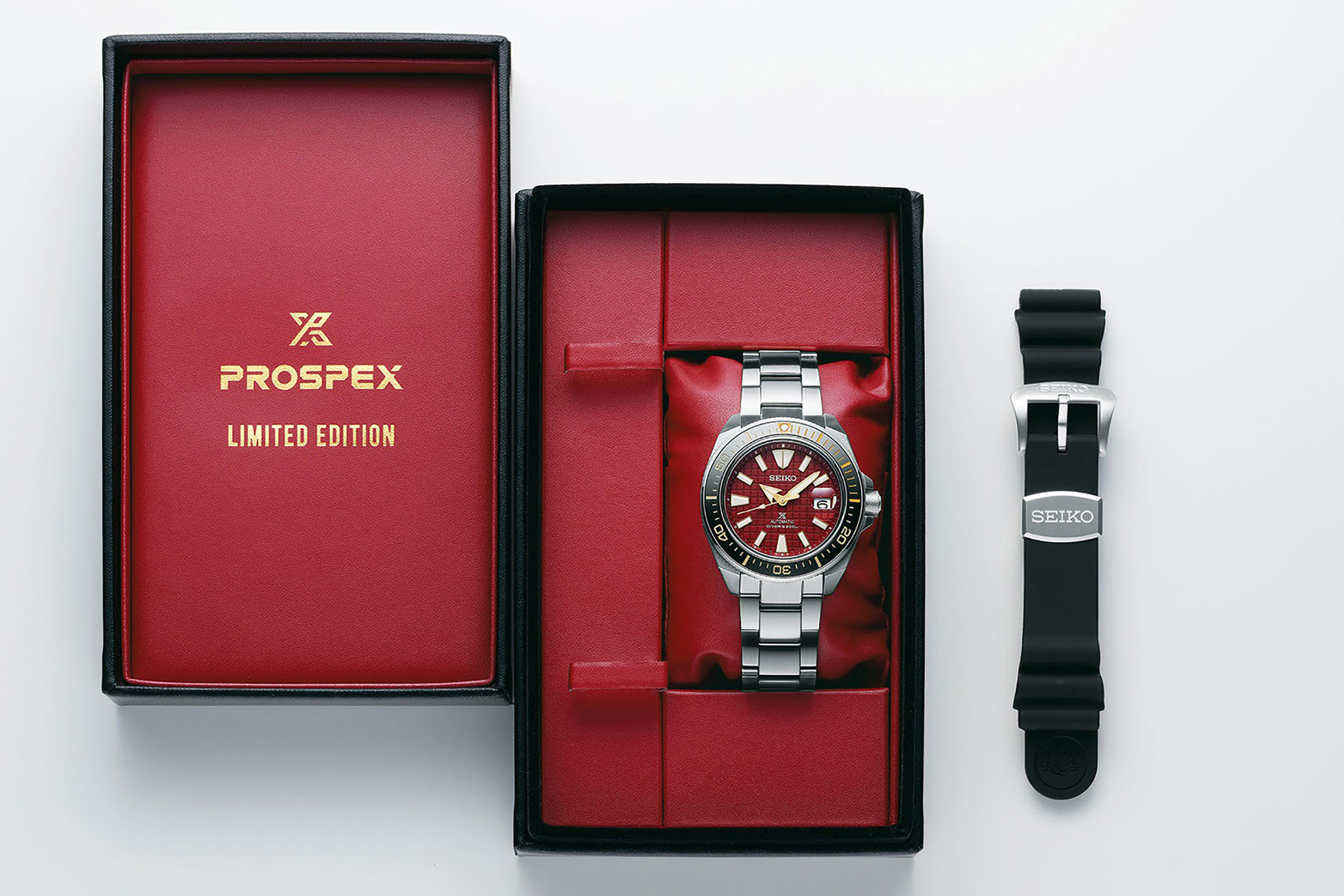 The new Seiko Samurai Prospex “Shu-iro” is a limited-edition model. Only 3,500 will be made available from January 2022 onwards. The watch will come in special matching packaging and will be delivered with an additional black rubber strap. Price-wise, the SRPH61K1 comes in at €740. As standard-production models are only €100 less, the price for this LE is still reasonable indeed. For more information, check the Seiko website here.