Hot Take: Serica Adds Some Fun To Its 4512 Lineup With The New California TXD

California numerals AND a tuxedo dial on a field watch... Where have I seen that before? Well, nowhere!
Daan de Groot
comments 7
Share

All right, I’ll admit it, I’m a Serica fanboy. So please excuse my excitement while you’re reading through this quick look at the latest dial variant in the brand’s 4512 field-watch lineup. I’ve never actually owned a Serica watch, but I’ve always been interested in the brand’s designs. Serica is basically a group of watch enthusiasts designing unique, tough, beautiful, and “affordable” watches for other watch enthusiasts. And I think this new California TXD variant of the Serica 4512 field watch is a perfect example of that. Although, the actual watch might not be perfect in itself. Please, let me explain.

If you’re not familiar with its watches and Serica as a company, please make sure to read Jorg’s review on the original 4512. He goes over most of the important company info, as well as the details of the original 4512 lineup of which this California TXD is a part. While you’re at it, please also take a look at Jorg’s review of the 5303 dive watch because I think the TXD’s dial was very much inspired by the white variant of that model. And if you don’t know where the California nickname comes from, please make sure to check out Rob’s dispute on that! All right, enough with the homework. Let’s get to the watch, which was introduced last Friday, March 11th. I just had to mention that because it also happens to be my birthday! 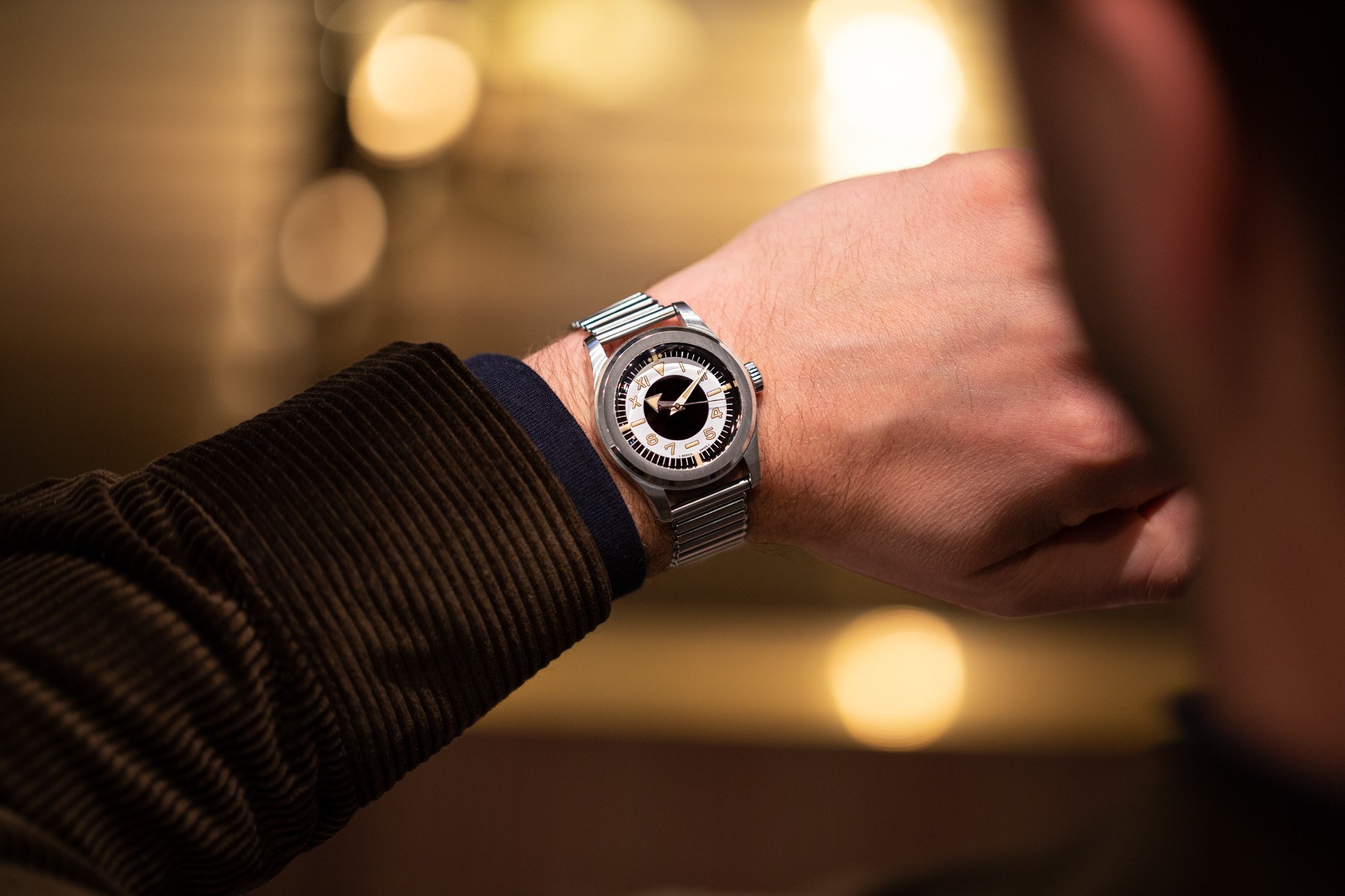 The devil is in the… bezel

The 4512 California TXD (nice wink to the Tudor Pelagos FXD there, by the way) still uses the same case, measuring 37.7mm wide, 11.3mm thick, and 46mm from lug to lug. I tried on the original 4512 when I met with another watch enthusiast. It proved such a fun, fully brushed case to wear with its comfortable size, graceful lugs including vintage-inspired lug holes, and that thick, flat-topped, beveled, and brushed bezel. Just like Jorg, I’m a big fan of that bezel. The flat brushed top of the bezel in combination with its polished facet adds so much body to the overall feel of the watch. The bezel also doesn’t fully reach the edge of the watch case, which adds yet another “ring” to the design when you look at it straight on. I feel like these rings really draw your attention to the watch and that they’re an essential part of the Serica design language.

Just look at the twin-scale steel-and-ceramic bezel that Serica used on its 5303 diver. The rings are present there too, and even more so on the white-dial variant, where the black minute track becomes another one of those rings. That’s precisely why that white-dial version of the 5303 is my hands-down favorite. I think the designers at Serica did such a good job in making the case and dial design come together like that. And on this 4512 California Tuxedo, they’re playing that same trick again. 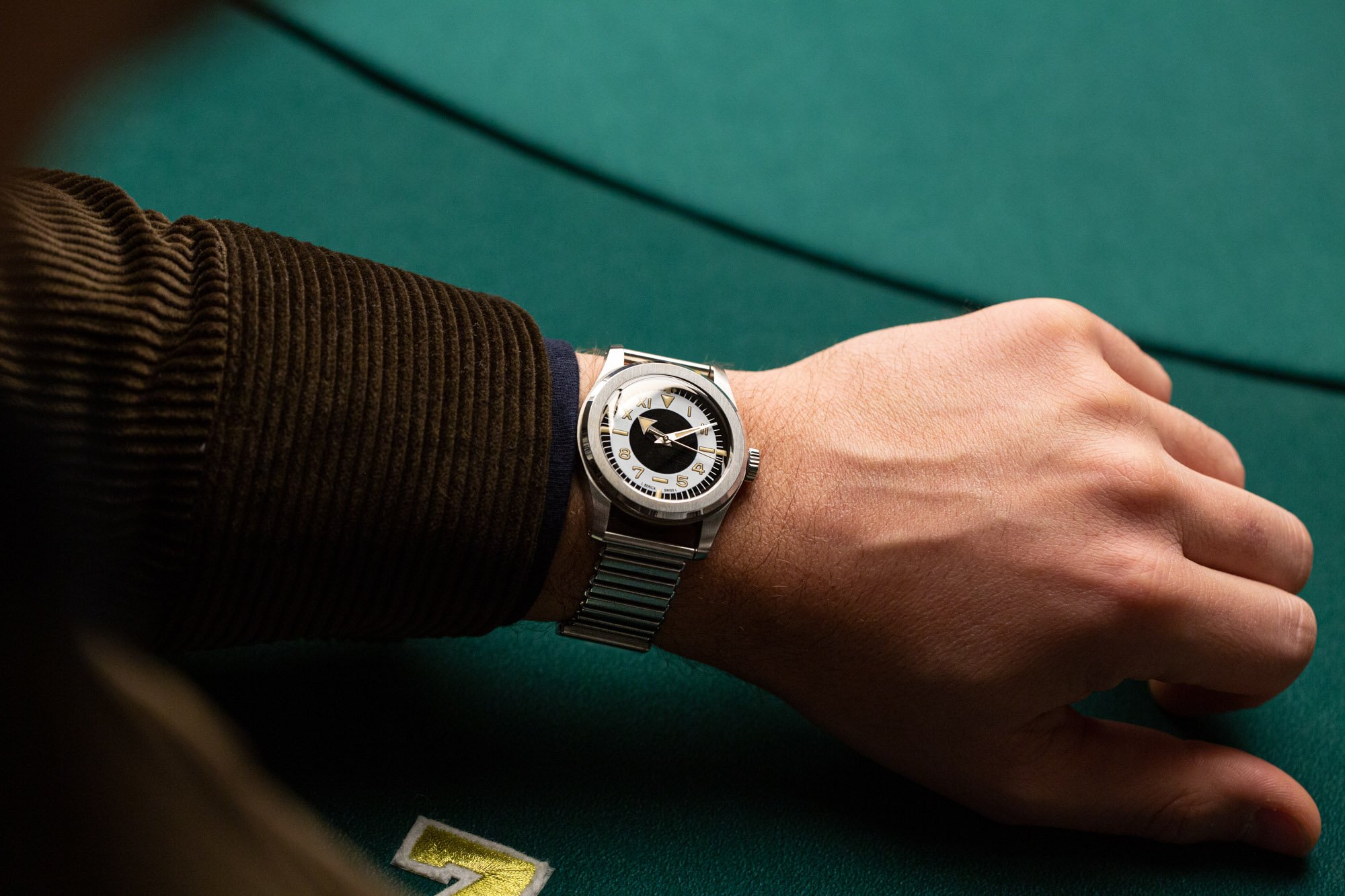 They even added another white ring by making the center of the dial black. That way, it almost looks like a bulls-eye or a sector dial. To me, it looks like a very playful design, even if you imagine those half-Arabic, half-Roman numerals aren’t there for a second. But I admit, it’s hard to imagine them not being there because they’re just so incredibly fun to look at. They’re a very good match with the tuxedo dial in my eyes.

A little inconsistent? Maybe, but also a whole lot of fun!

In comparison to the original 4512 California, the TXD’s dial layout is pretty much the same, including the steel broad-arrow hands. However, to me, it looks very different. That’s because of the black and white enamel on the dial, of course, but it’s also because the numerals have been made a bit bigger. I guess this is to add some extra character, but also to fill them with a thick layer of lacquered faux-patina lume. I’d love to see this watch in the metal because, to me, this is something that can really make or break the overall design of the California TXD. 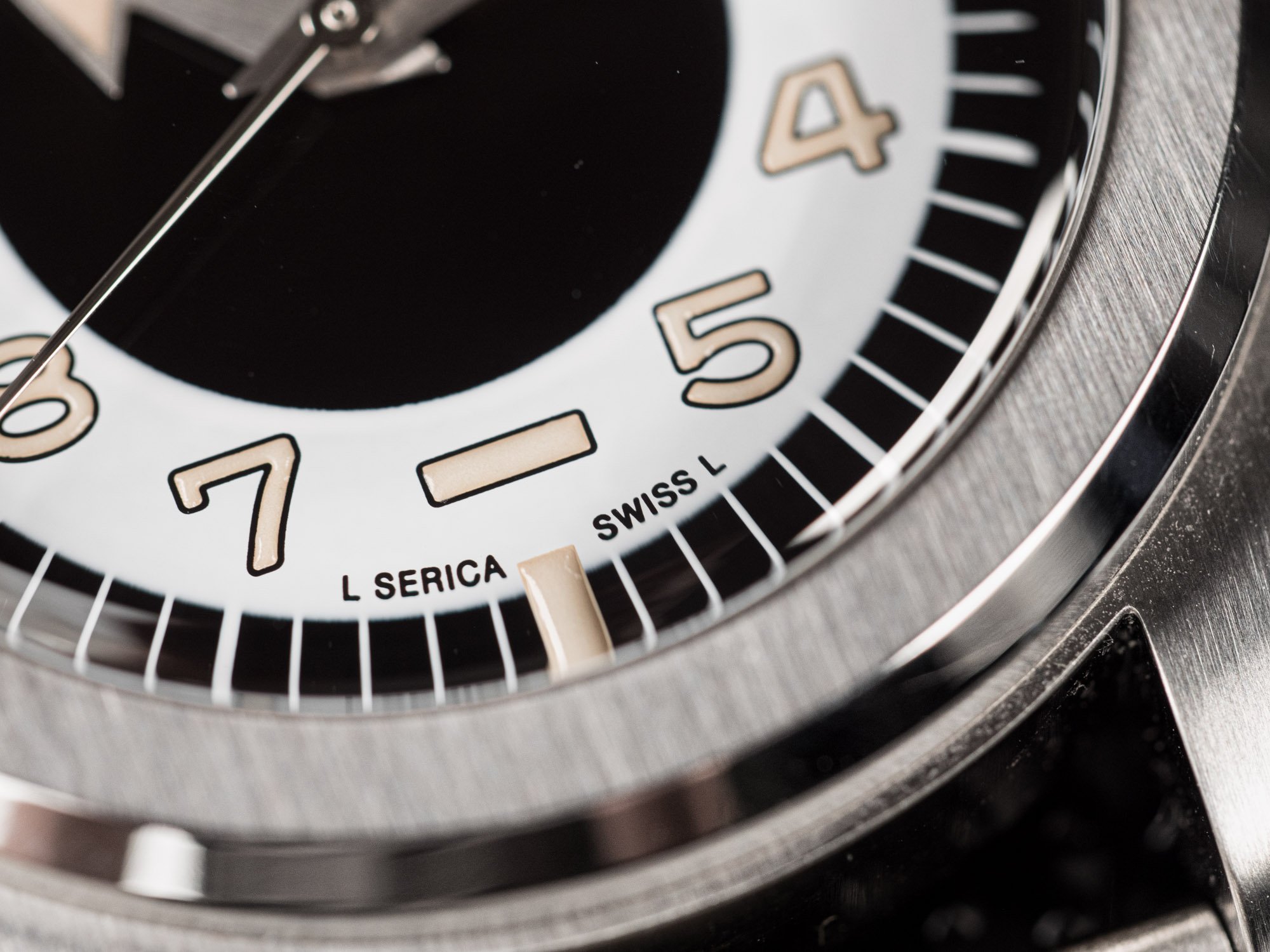 Don’t get me wrong, I actually really like the overall design. But those faux-patina numerals with their black outline on a white background are the one thing that is stopping me (for now) from getting one of the 100 pieces available for pre-order. Just imagine if this watch had been an actual vintage piece. In that case, those numerals would’ve been white to start with. What would that have looked like, do you think? Wouldn’t it have been more consistent to have black numerals on the white background?

Probably yes, but would it have looked as playful and fun as it does now? Probably not. And I think that’s exactly the point of the 4512 California TXD. It’s supposed to be a fun, playful addition to the lineup, whereas the original 4512 was designed to be someone’s one and only watch. The California TXD is for those who already have a collection. With that purpose in mind, I think its design works wonders! 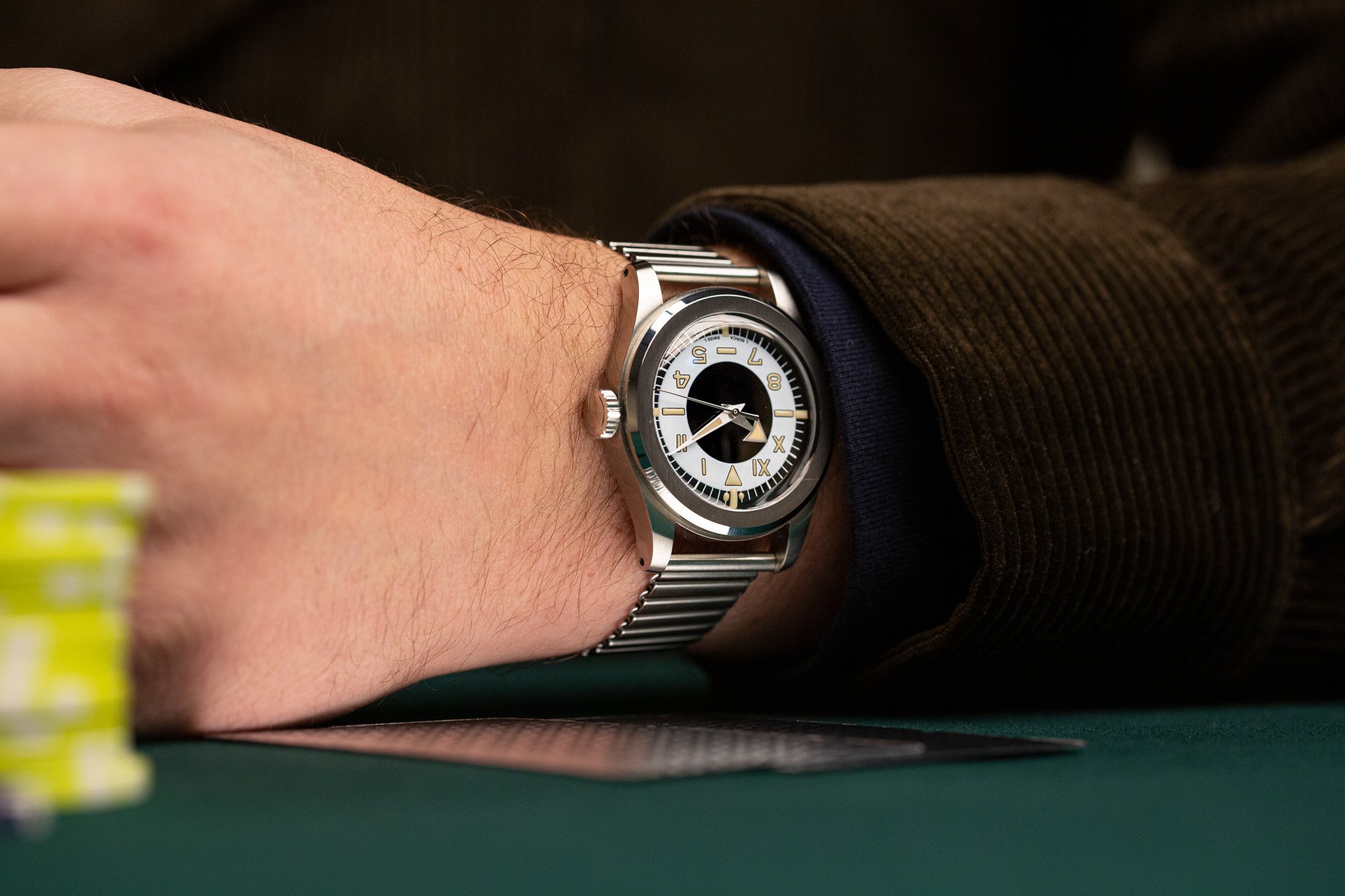 And don’t forget the Bonklip!

Just like the other 4512s in the lineup, the California TXD houses a hand-wound Soprod STP1-11 with a 40-hour power reserve. It also comes on a wonderful Bonklip bracelet, which I do own, by the way. I wear it a lot on my 38mm Blancpain Bathyscaphe and Oris Art Blakey. It’s such a comfortable and, in my eyes, great-looking bracelet, that I wouldn’t mind getting another one on the California TXD. The Serica 4512 California TXD is now available for €690,-.

What do you think of the 4512 California TXD? Do the California numerals work with the tuxedo dial in your opinion? Let me hear it in the comments! Check out the Serica website for more information.

Hot Topics
Laventure Automobile Chronograph With A Proprietary Movement — Marking A Huge Leap Forward For One Of The Industry’s Most Promising Brands
155 comments
Fratello Exclusive: An Inside Look At The MoonSwatch Production Facilities
75 comments
Selling Your Watch To A Dealer Or Trading It In — Tips From A Former Watch Dealer
49 comments
Summer Splash — Round 2 : Jorg’s Tudor Pelagos FXD Vs. Lex’s Hublot Big Bang Integral Ceramic Sky Blue
47 comments
The Top 10 GMT Watches Right Now — From Ball, Grand Seiko, Tudor, And More
44 comments
Popular
You Asked Us: Rolex Submariner vs Omega Seamaster
Robert-Jan Broer
22
Why Are There No Stainless Steel Rolex Watches Available?
Robert-Jan Broer
119
Seiko Tuna For The Rest of Us
Gerard Nijenbrinks
13