Since we have the Speedy Tuesday feature here on Fratello Watches, we get to see quite a bit of Speedmasters every week. Once in a while, something really rare comes along. We already had the honour to feature an astronaut’s Speedmaster, a prototype Speedmaster that ended up on someone’s wrist and astronaut Stafford’s personal gold Speedmaster. Today we again have something special – or rare – to feature, a special version of the Speedmaster Holy Grail.

This version of the Speedmaster Holy Grail – as it was nicked by the late Chuck Maddox – was produced for the Italian market in 1987. Only 200 pieces were produced of this automatic Speedmaster in a ‘Professional’ case. 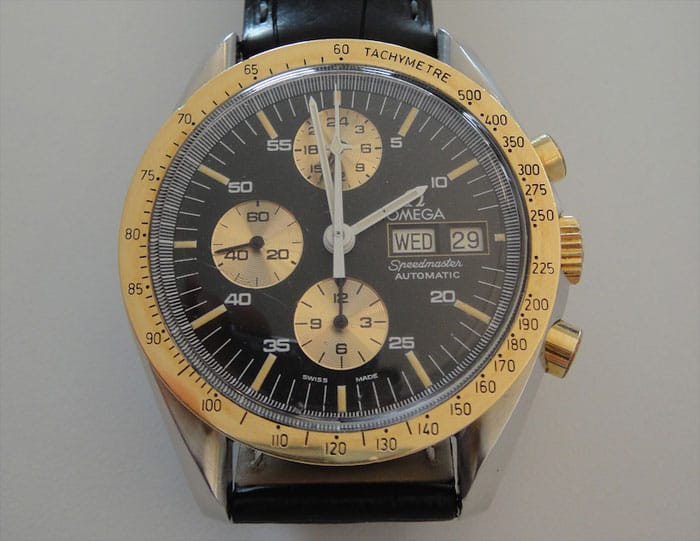 A few words on the Speedmaster Holy Grail before we discuss the featured watch here on Speedy Tuesday. Chuck Maddox wrote in his legendary article on the Omega caliber 1045 watches (derived from Lemania’s 5100 movement):

A personal admission: I’m the one to blame for “the Grail Watch” moniker…

My first Vintage Omega eBay purchase was nearly a 376.0822 out of Germany in January of 1999. Because the 376.0822 was in Germany, I didn’t know any German (hell anyone in Germany at the time), I went instead for a 176.012 (the most common of the 7-8 Speedmaster c.1045 variants which sports a Mark II/IV style case) out of Iowa for around the same money (about $600 USD). I had owned my Mark II for 15 years at this point, that style case was a known quantity to me, and if I had a problem with the watch I figured I could gas up my Explorer and drive out to Iowa if need be, I couldn’t really do that with the German watch.

About a month later I realized I wish I had bought both examples… So I stared looking for another example to purchase. And I searched, and searched, and searched. The only one I found was listed at over $10,000 on a Japanese website and there wasn’t a speck of English on that site aside from “Omega Speedmaster” and Arabic numbers. It took me a year and a half to find another one (aside from the Japanese origin one) offered for sale and it was on eBay out of Philadelphia. I got into a three way shootout for it with a fellow TZOFer and one of the well healed Japanese collectors and came out in 3rd place with an winning bid well north of $2,700 (this is summer 2001). I finally tracked one down about six to eight months later with the help of another TZOFer and brought home my example. During this quest I searched with the intensity that King Arthur searched for the Holy Grail and I began calling this model “the Grail” because I was that obsessed with it.

Ever since, people have been looking and searching with even more interest for this particular Speedmaster model. Does it also mean it was Chuck Maddox’ favorite daily wearer though? No, that was something completely different, check this article.

This time however, Omega decided to use this work-horse movement in a Speedmaster Professional ‘Moonwatch’ case instead of the chunky 1970s Mark-series case or the German Speedmaster Teutonic case. Only 2000 Speedmaster Holy Grail reference ST376.0822 watches have been produced, according to Chuck Maddox’ article perhaps even less.

In any case, just like the Omega Speedmaster Professional DD 145.0022 – a bi-color version of the Moonwatch – that was especially produced for the Italian market a couple of years earlier, Omega decided to produce a bi-color model of the Speedmaster ST3760822 in 1988. 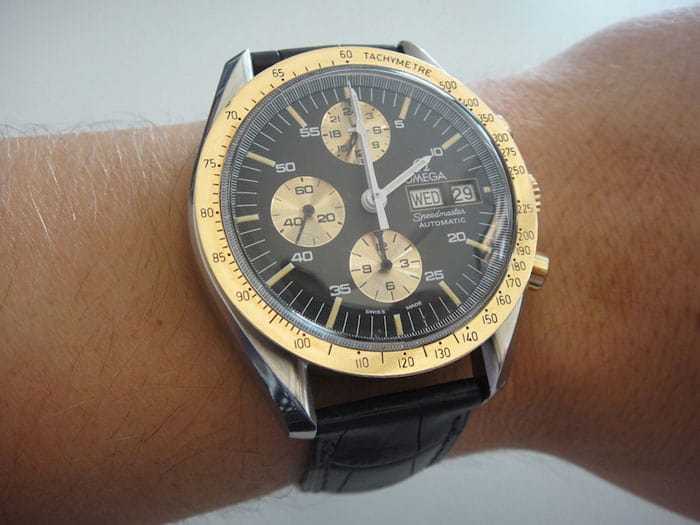 Limited to 200 pieces only, this Italian version of the Speedmaster Holy Grail is even more rare than its stainless steel brother. It is unknown to us weather this model was also delivered on a stainless steel bracelet (reference 1450) or a bi-color variation. The Italian Speedmaster Holy Grail models we’ve seen before – in official documentation – were all on leather straps.

We came across this other Italian reference 376.0822 Speedmaster Holy Grail with a bracelet on OmegaForums but we are not sure whether this bracelet was originally delivered with this watch.

As you can see, the dial has gilt sub dials with back small hands as well as a gold tachymeter bezel, pushers and crown. Actually, because of this, some collectors out there call it the “Liberace Grail” instead of Holy Grail. 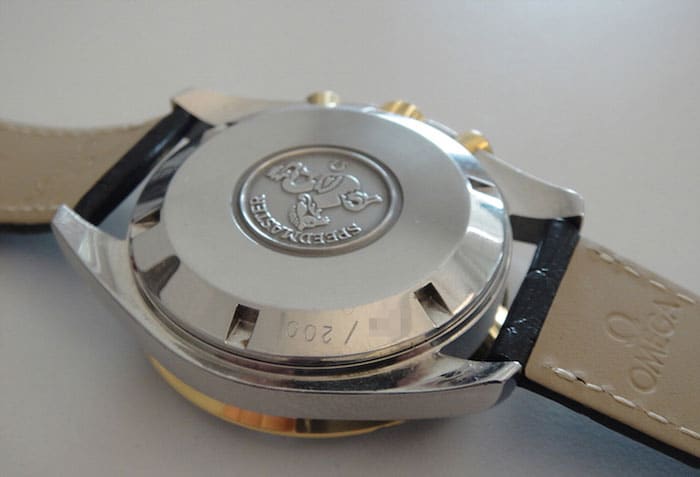 Why Omega did not make more Speedmaster watches like the Holy Grail with a Lemania 5100 based movement is unknown to us. It would have been a more ‘interesting’ alternative to the hand-wound Speedmaster Professional than the Speedmaster Reduced ever was.

Anyhows, both versions are rare and had limited productions. It is probably a matter of taste which one you like best or if you are a collector; you just need both of course.

A big thank you to our anonymous Swiss Speedmaster collector for sending us photos of his Speedmaster Holy Grail.

More photos in the gallery below.

Make sure to sign-up for our weekly newsletter, you can register (above) at the right pane.