You might have read it before here on Fratello Watches, but on May 15th, Christie’s has their Rare Watches auction. Three lots in that auction are pieces that you might have read about in a couple of our Speedy Tuesday articles. The white and yellow gold Omega Speedmaster Professional of the 1980s and a stainless steel version from the 1980s. All three with display backs. Actually, the first Speedmaster models with a display back. Let’s have a look. 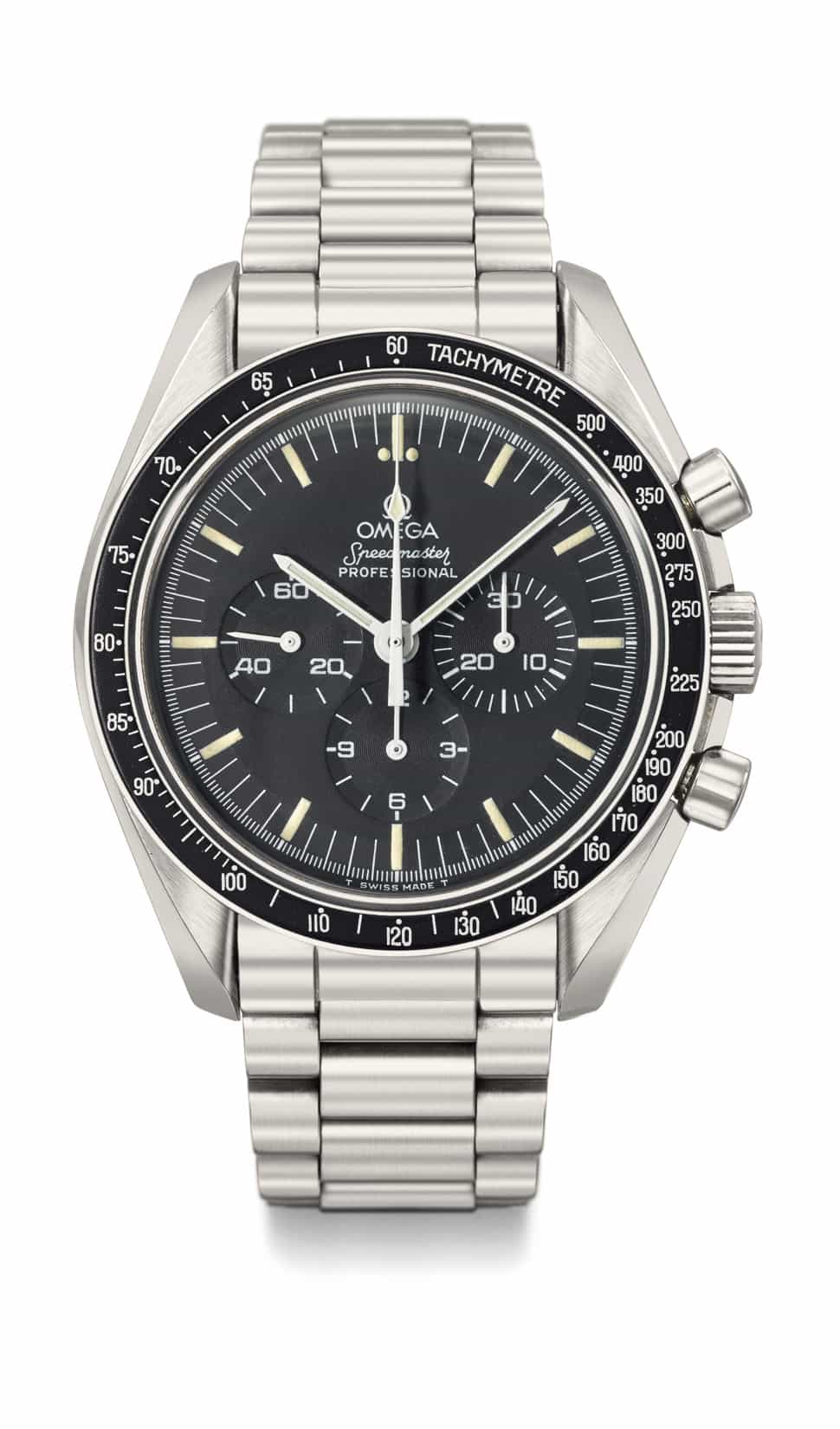 The first Speedmaster watch with display back in Christie’s Rare Watches auction catalog is this reference 345.0808 that dates back to ca. 1985. Lot 65, to be exact, was the first stainless steel Speedmaster to feature a display back to reveal the hand-wound Lemania based movement. Inside, is the Omega caliber 863. A copper colored movement that is actually just a nicer (optical) version of the famous caliber 861. Today, the hand-wound Speedmaster Professional Moonwatch uses the successor of this movement, caliber 1861. Modern versions with a display back have caliber 1863 (with rhodium plated finish instead of the copper-colored finish).

Only 1000 of these watches have been produced and are numbered on the back. This reference, 345.0808, was used for well into the 1990s. However, this particular reference with a limited run of 1000 pieces was only produced between 1985 and 1988. There were other numbered editions of this model later on, but with a slightly different caseback. To make it a bit more confusing, the second batch of this reference with 1000 pieces only, had a different caseback as well. It featured the ‘Apollo XI’ inscription besides the text you will see on the image below (thanks Moonwatch Only). 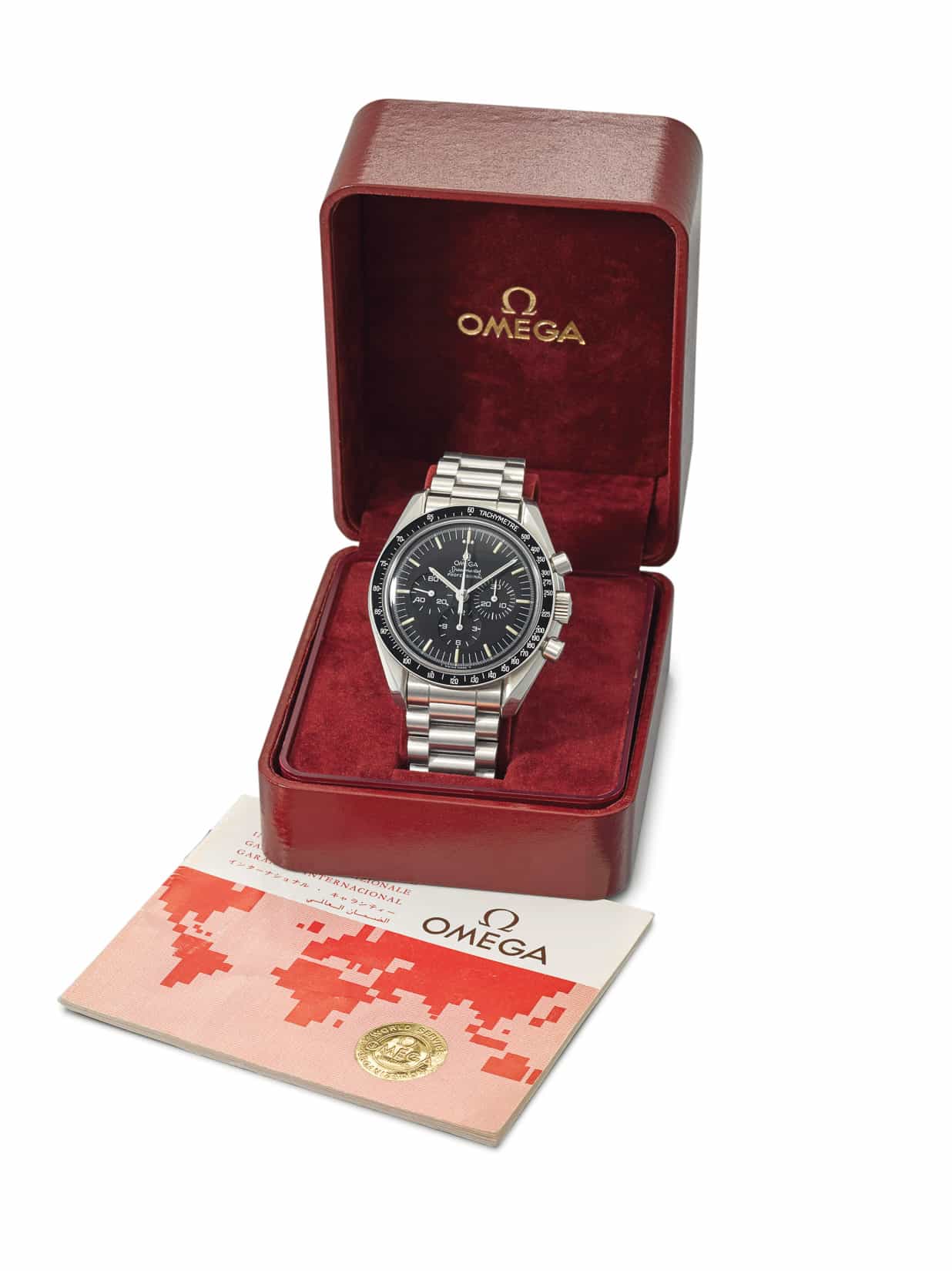 This specific Speedmaster Professional with display back was commemorating the 20th anniversary of the certification by NASA (1965). This is something we know (it doesn’t say so on the watch itself) because of the text in the original booklet that came with these watches.

Besides the individual number engraved in the caseback, you will also find it between the lugs of the watch (at 12 o’clock). Christie’s offers this Speedmaster Professional reference 345.0808 on a reference 1447 bracelet and comes complete with box and guarantee booklet. Christie’s estimates this watch between 4.700 and 9.400 Euro. 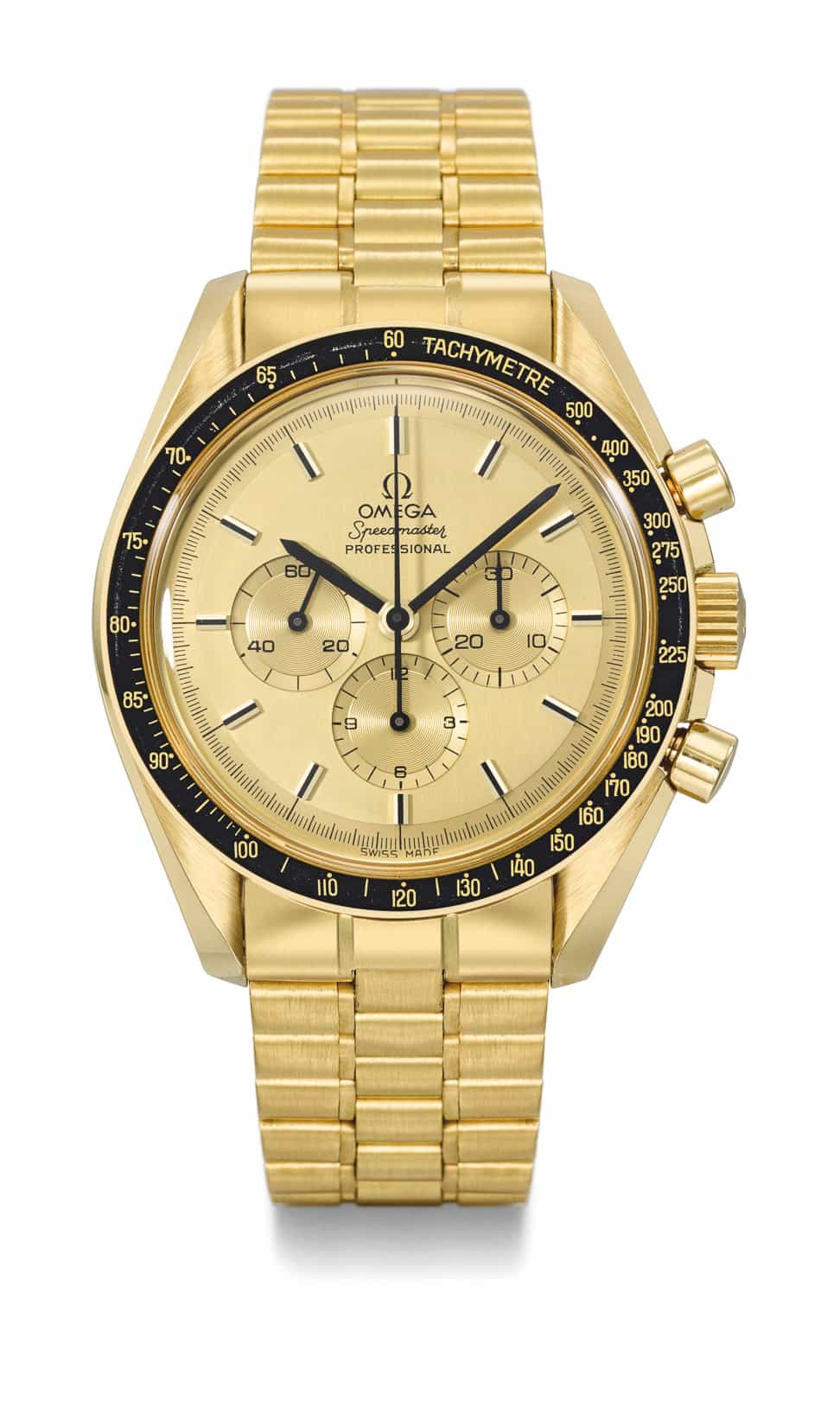 Next up is Lot 66 of Christie’s Rare Watches on May 15th. This is a rare gold Speedmaster Professional that we covered here relatively often in the past. It is the watch that I was able to take off the wrists of astronaut Thomas P. Stafford during an event (here is an article I dedicated to his personal gold watch) and a watch that I bought later on myself as well. There are supposedly only 300 of these gold Speedmaster Professional watches from 1980, of which 20 were in white gold and the remaining number in yellow gold.

Christie’s description tells us that this watch was done for the 10th anniversary of Apollo XI (1969), but first of all that doesn’t make much sense (as it was 11 years ago in 1980) and second, the official paperwork of the watch mention the re-certification of the Speedmaster for the Space Shuttle mission as reason to come with this commemorative gold Speedmaster Professional. We wrote about the connection between this watch and the space shuttle re-certification in this article. I am a bit amazed that Christie’s did not read the paperwork that comes with this watch. The watch does say Apollo XI 1969 on the caseback, which might have caused confusion. The paperwork  does mention the Apollo XI landing, but clearly states that the re-certification was the reason for this 18 carat gold piece.

This gold Speedmaster Professional reference BA345.0802 has a unique number engraved on the bezel of the display back. This is actually no 31. Through the display back, you will see Omega’s caliber 861L. This is a special version of the regular caliber 861, but with a more (L)uxurious finish. It comes very close to the later caliber 1861 (introduced in 1997) with its rhodium plated finish. Besides that, this movement has 19 jewels instead of the – then – more common 17 jewels. 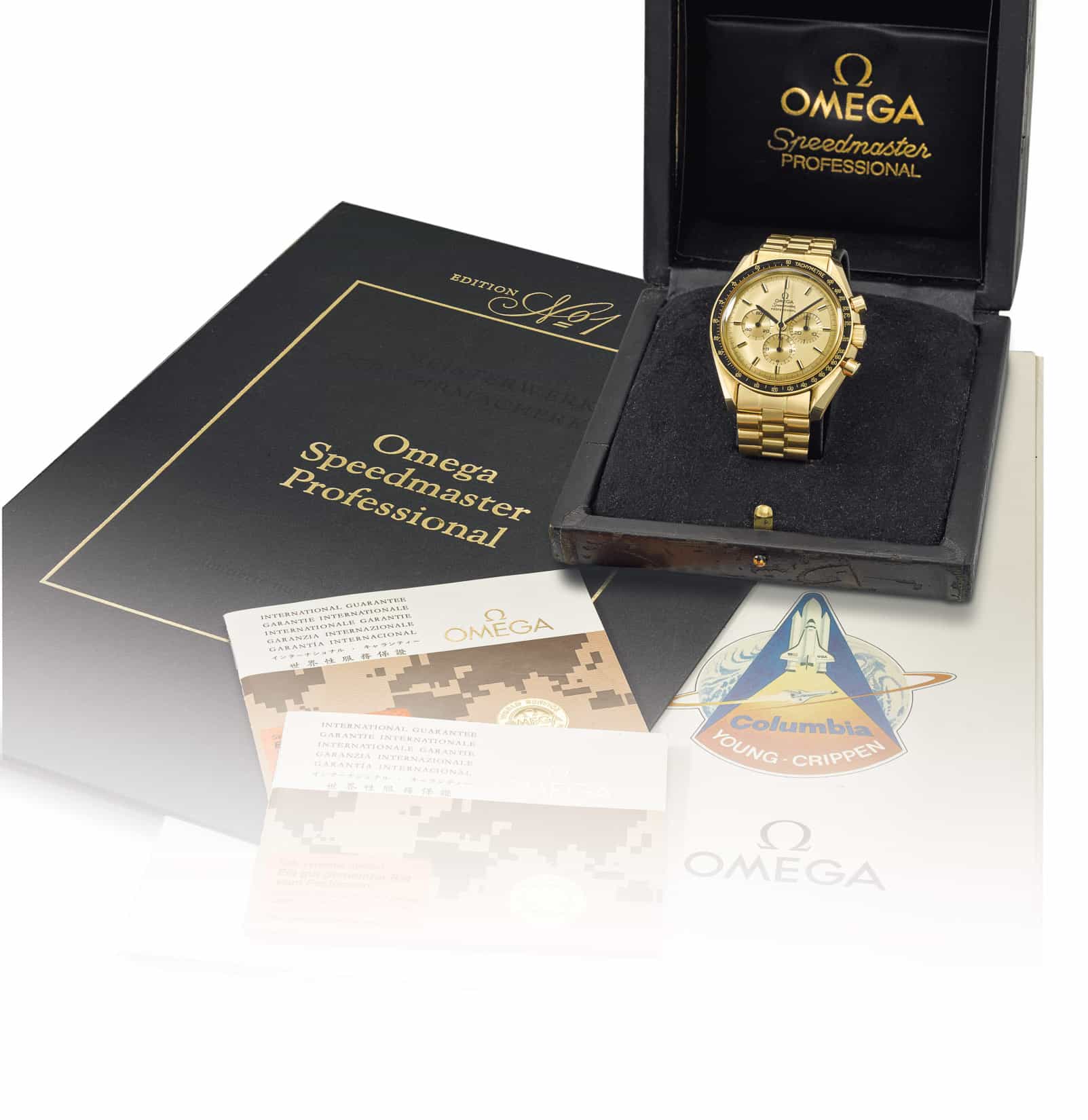 All 280 pieces of this reference were produced between 1980 and 1988. I’ve recently seen some (German) brochures that already had this particular watch marked as ‘sold out’ in 1988. About half of the number of these yellow gold watches went to the German market. This particular no.31 was also delivered to Germany in December 1981. Interesting to see is that my personal watch is No.63 and was delivered one year earlier to the German market. Even today, you’ll find later numbers being delivered earlier to the market, for several reasons (specific requested numbers, issue with a watch during the manufacturing etc.).

This piece, complete with box and paperwork as well as some additional written (Space Shuttle!) material and letters (written by Thomas P. Stafford) that belong to the watch, is lot 66 of the Christie’s auction and is estimated between 15.000 and 23.000 Euro. More information about this specific reference can also be found here. 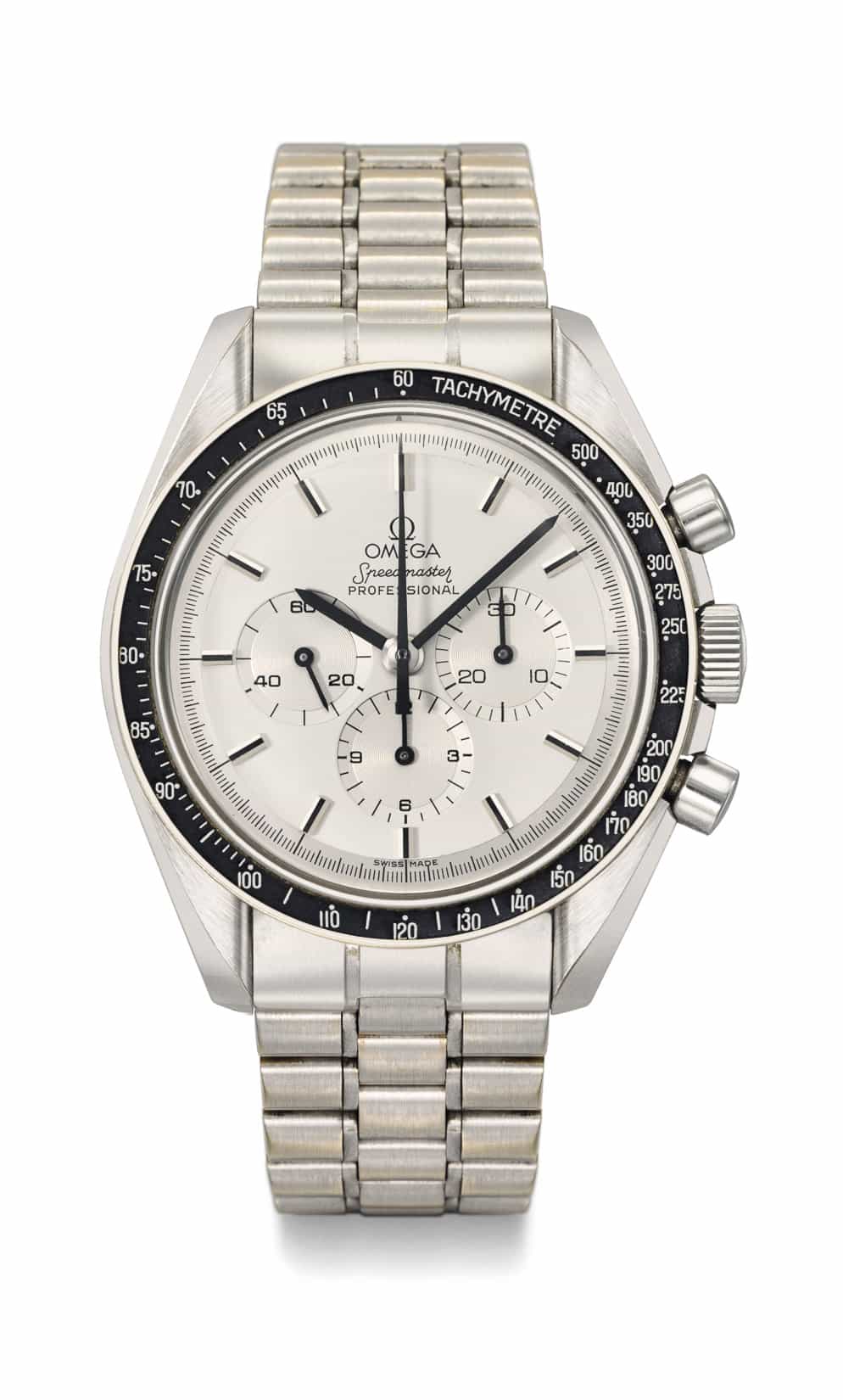 A reference similar to the yellow gold model above, but BC stands for white gold. This is a very rare piece and I have talked about it in detail before (click here). Only 20 have been made and I keep wondering how many of those 20 are actually left (or survived all the economic crises where the price of gold was interesting). Anyway, this is no. 4 of the original 20 pieces. It is a watch with the same specifications and box, papers etc. as the yellow gold version. It is just more rare.

To be honest, this is one of the coolest Speedmaster Professional watches I’ve ever held in my hands. Not only due to its rarity, but also due to the use of white gold for the case and bracelet. The silver-grey white gold dial is a joy to look at and gives a great contrast with the black stick markers and hands. The display back unveils the caliber 861L movement, as described for the watch above. 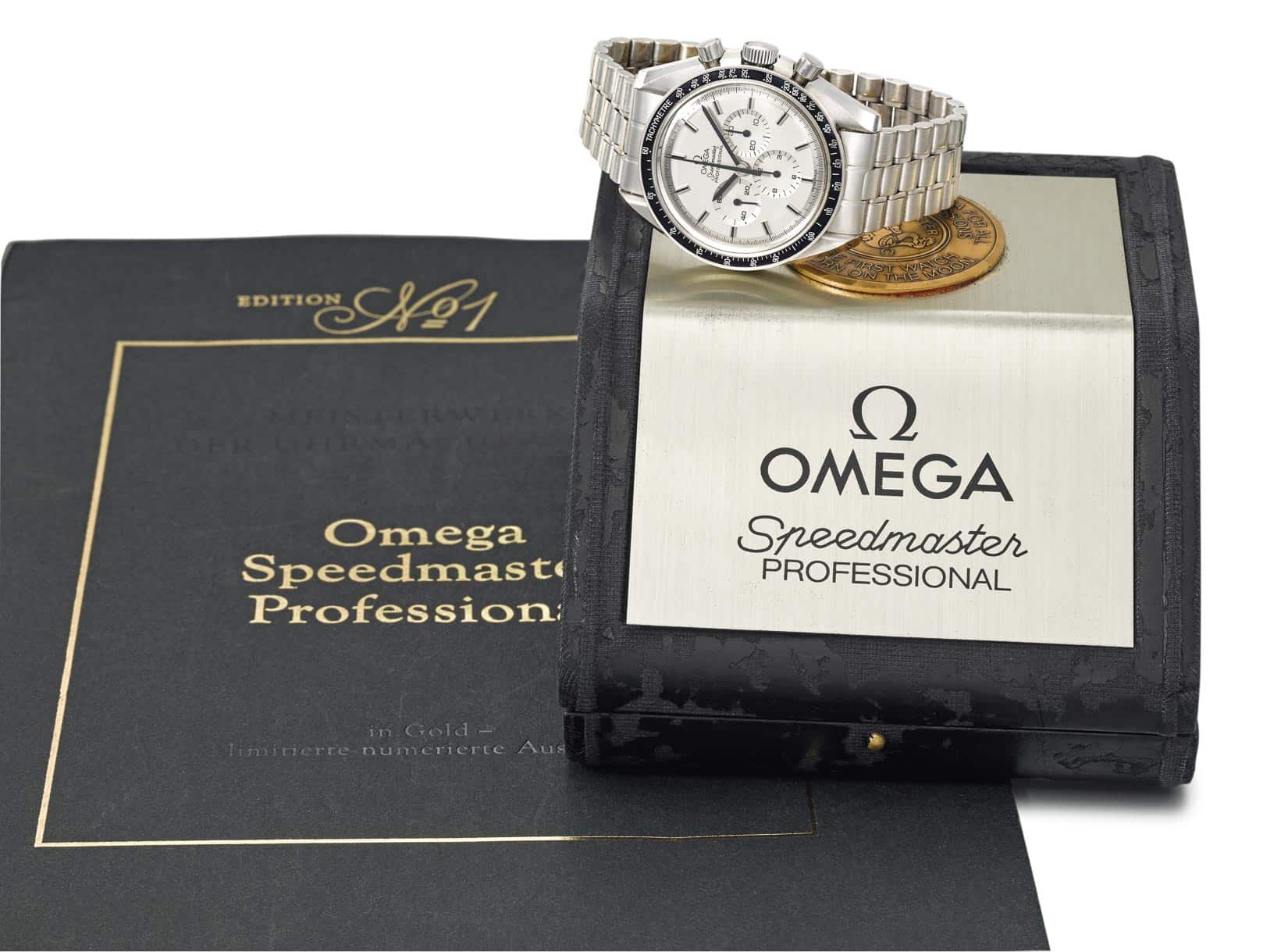 This white gold Speedmaster Professional with display back does not have the letter/booklet by Thomas P. Stafford, but comes with the black authentication certificate/booklet and the original box. The boxes that belong to these 300 gold pieces I’ve never seen with any of the other Speedmaster watches.

Hot Topics
Laventure Automobile Chronograph With A Proprietary Movement — Marking A Huge Leap Forward For One Of The Industry’s Most Promising Brands
155 comments
We Talk To Swatch Group CEO Nick Hayek About The MoonSwatch
85 comments
Fratello Exclusive: An Inside Look At The MoonSwatch Production Facilities
75 comments
Selling Your Watch To A Dealer Or Trading It In — Tips From A Former Watch Dealer
49 comments
Summer Splash — Round 2 : Jorg’s Tudor Pelagos FXD Vs. Lex’s Hublot Big Bang Integral Ceramic Sky Blue
48 comments
Popular
The Omega Seamaster Diver 300M Returns – On The Wrist Of Daniel Craig
Paul Dezentjé
15
You Asked Us: Rolex Submariner vs Omega Seamaster
Robert-Jan Broer
22
Hands-On With the Seiko Prospex SRPC91K1 – Save The Ocean
Robert-Jan Broer
15