If you already own an Omega Speedmaster Professional “Moonwatch” or two, and you decided that you want to collect them or at least want more of these, you will find yourself browsing the web for vintage references as well as limited editions. And let’s be honest here, there are quite a bit of limited editions when it comes to the Speedmaster. They surely do not all appeal to me, but there are a couple of ‘no brainers’ between them as well. What about ‘basically’ any of the Apollo XI commemorative models? The beautiful blue Gemini IV, the Panda dial Mitsukoshi or the Apollo-Soyoz with Meteorite dial are all worth collecting, to mention just a few. Then there are of course the Snoopy watches (2003 and 2015). 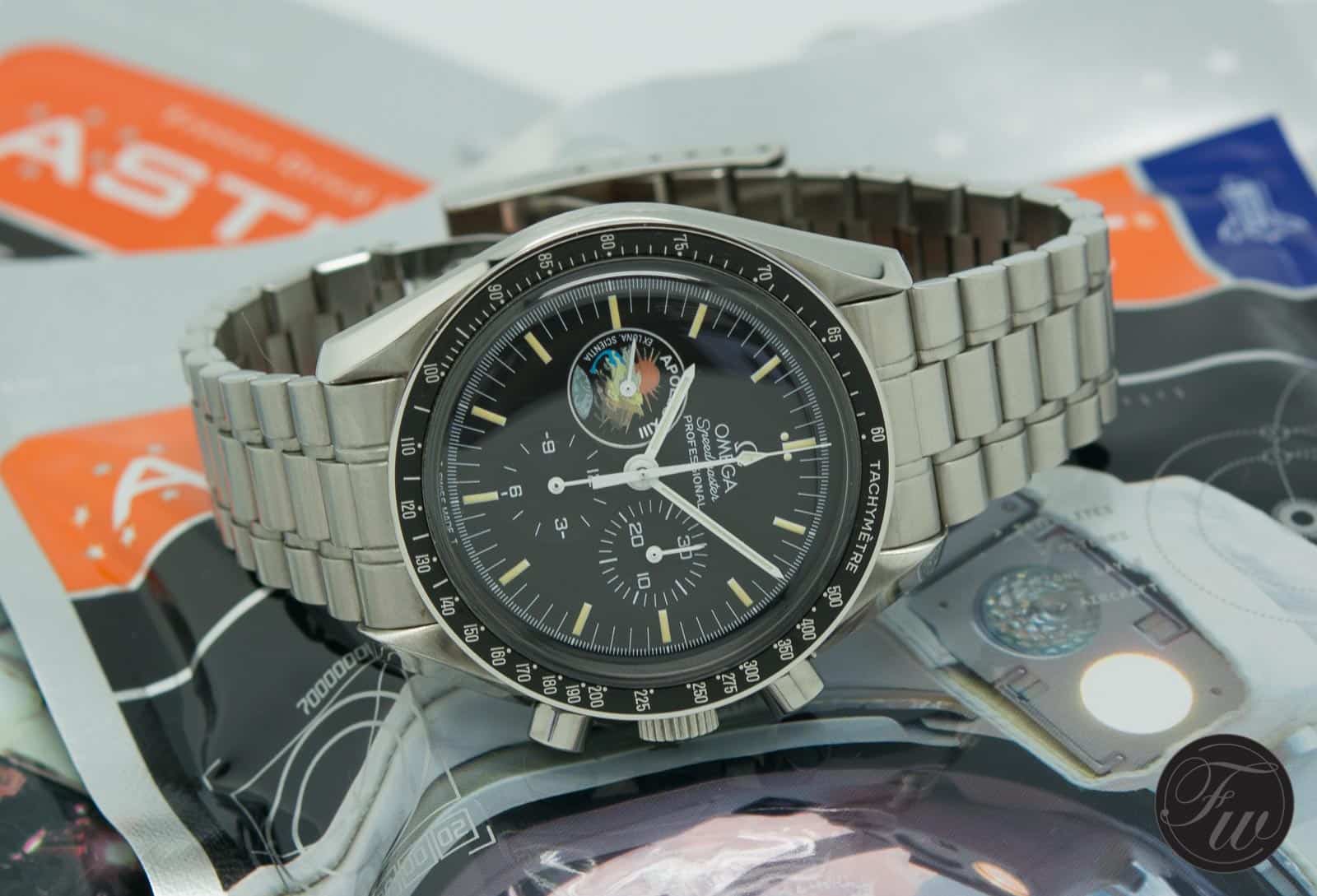 In 2013, I was looking for an Omega Speedmaster Professional Snoopy Award watch. Well, I was looking for that watch for quite some time, but it wasn’t until Summer 2013 before I received an offer from someone who had one for sale. Instead of paying, I decided to trade something, but either some additional money should be coming my way or an additional watch. The additional watch was this Omega Speedmaster Professional 3595.52 “Apollo XIII”. I knew the watch and loved it already, but it was more or less collateral damage in the end when getting the 2003 Snoopy Award watch.

Immediately after I picked up the Speedmaster Professional 3595.52 “Apollo XIII” it struck me that I might like the mission patch located on the 9 o’clock sub dial even better than the Snoopy patch on the 2003 Speedmaster Professional Snoopy Award. The Snoopy story is of course awesome, but purely based on aesthetics, the used color scheme for the Apollo XIII mission patch is just perfect. The yellow and orange do really well with the yellow-ish tritium hour markers.

That’s right, in 1995 it was the 25th anniversary of the Apollo 13 mission (1970), beautifully documented in the “Apollo 13” movie with Tom Hanks. In case you haven’t seen it, you should. Omega decided to commemorate that year (and mission) with a limited edition Speedmaster Professional of just 999 pieces. That might not seem that limited, but the regular production run of Omega is huge of course and so is the demand for these type of limited edition Speedmaster watches. So basically the watch is identical to just any Moonwatch model from that period (movement, case, bracelet etc.) except for the dial, inscription on the caseback and packaging. As you can see on the image below, the caseback has – besides the regular “Flight-qualified by NASA for all manned space missions” and “The first watch worn on the Moon” inscription, an addition inscription stating “Apollo 13 Limited Series XXX/999”. 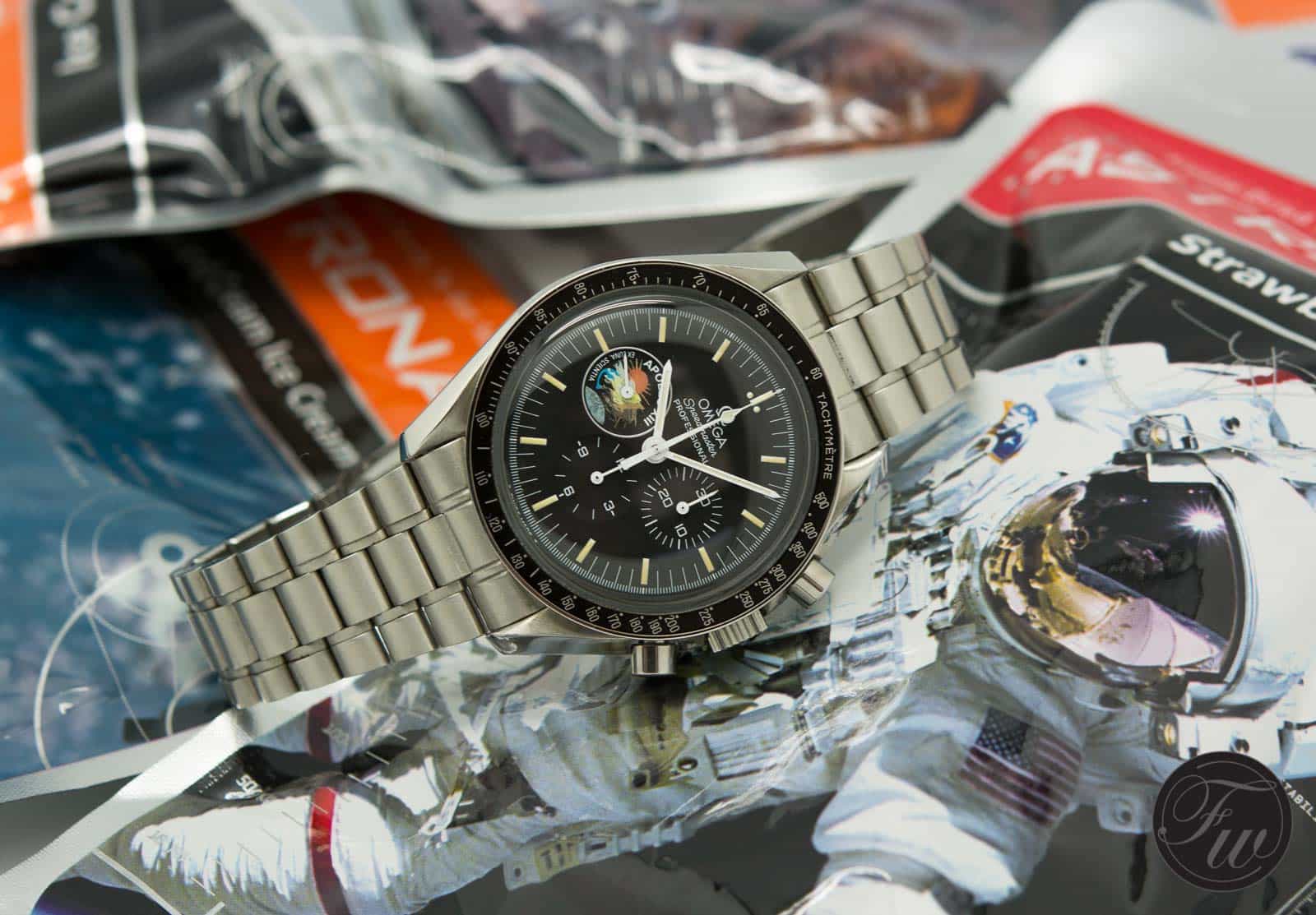 The Speedmaster Pro Apollo XIII on some bags of astronaut food.

As mentioned above, the dial has this beautiful Apollo XIII mission patch located on the 9 o’clock sub dial. It might have been actually one of the first Speedmaster Professional watches with a mission patch on the dial. The yellow, red, orange, blue and other colors match very well in this little mission patch. Instead of the names of the astronauts, it is one of those few patches that bears an expression. 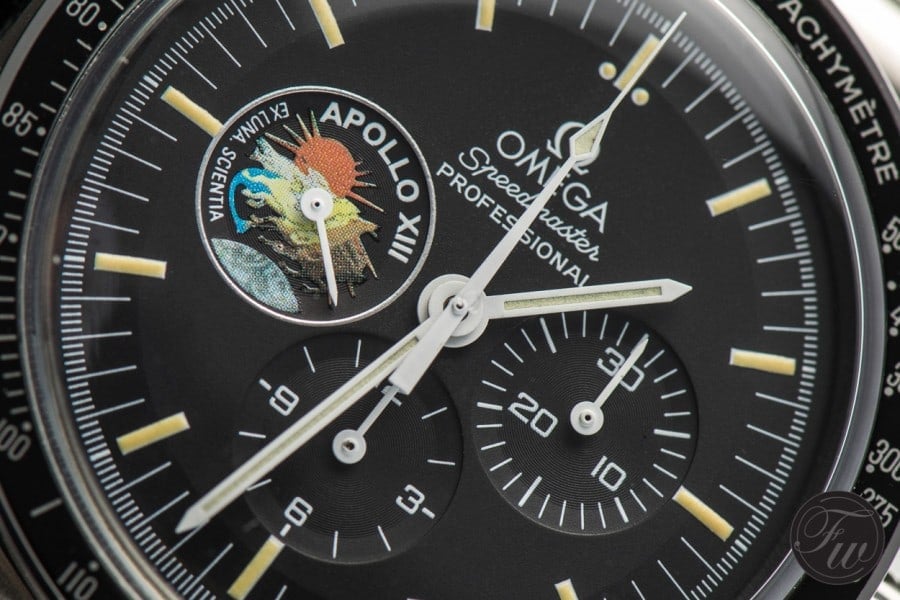 Jim Lovell explains the design and origin of the patch in an interview he had with Glen Swanson in Quest magazine (spring 1995 “The History of Space Flight” edition):

“When we got the patch together … we were the first [crew] to take the science aspect of the flight seriously. … The idea of that patch was essentially mine. I didn’t draw it; I drew the other three patches (Gemini 7, Gemini 12 and Apollo 8). I said we wanted to do something with Apollo. I started out the design of this patch with the idea of the mythical god, Apollo, driving his chariot across the sky and dragging the sun with it. We eventually gave this idea to an artist in New York City named Lumen Winter, and he eventually came up with the three horse design which symbolized the Apollo but also included the Earth and the Moon. The funny thing is that Winter, prior to making the patch for us, made a large wall mural of horses crossing the sky with the Earth below which is prominently displayed at the St. Regis Hotel in New York City. The horses are very similar to the ones on our patch, except that it had a fourth horse falling back and that, ironically, could have been Ken Mattingly who was replaced before our flight. That mural is now in New Jersey someplace. Anyway, we said, ‘Why put names on it?’ We decided to eliminate the names and instead put in the Latin ‘Ex Luna, Scientia’ or ‘From the Moon, Knowledge.’ I plagiarized this somewhat because it is similar to the Naval Academy ‘Ex trident, scientia’ which is ‘From the sea, knowledge.'”

The dial has tritium hour markers, which Omega used till 1997/1998. The hands have tritium as well of course. Most Omega Speedmaster Professional 3595.52 Apollo XIII models I come across have the same yellow-ish patina. The mission patch might see some discoloration though, probably due to exposure to a lot of Sun light, I assume. 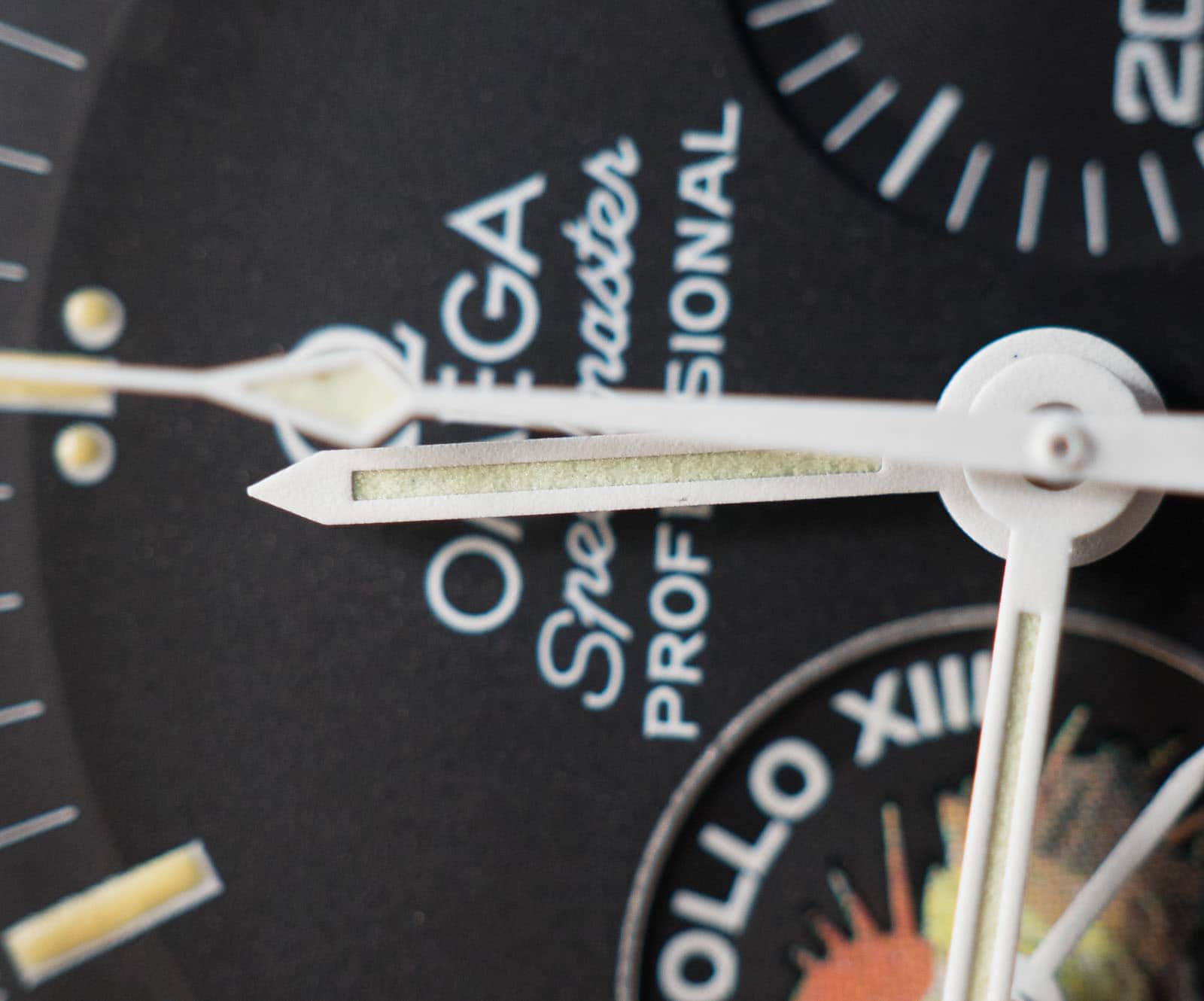 The case of the Speedmaster Professional 3595.52 Apollo XIII is a normal 42mm stainless steel Speedmaster case. Lyre lugs, crown protectors, “TACHYMÈTRE” and “dot below 70” bezel. As written above, the caseback is a bit different to the regular ones as aside from the standard NASA Moonwatch engraving, there is a mention of the Apollo 13 commemoration and a unique number. Mine is 234 of 999, which does not have a special meaning to me (134 would have been nicer as I am born on April 13th, 11-17 April were the days of the mission in 1970) but since I bought it 18 years after the release, I had nothing to choose from of course. 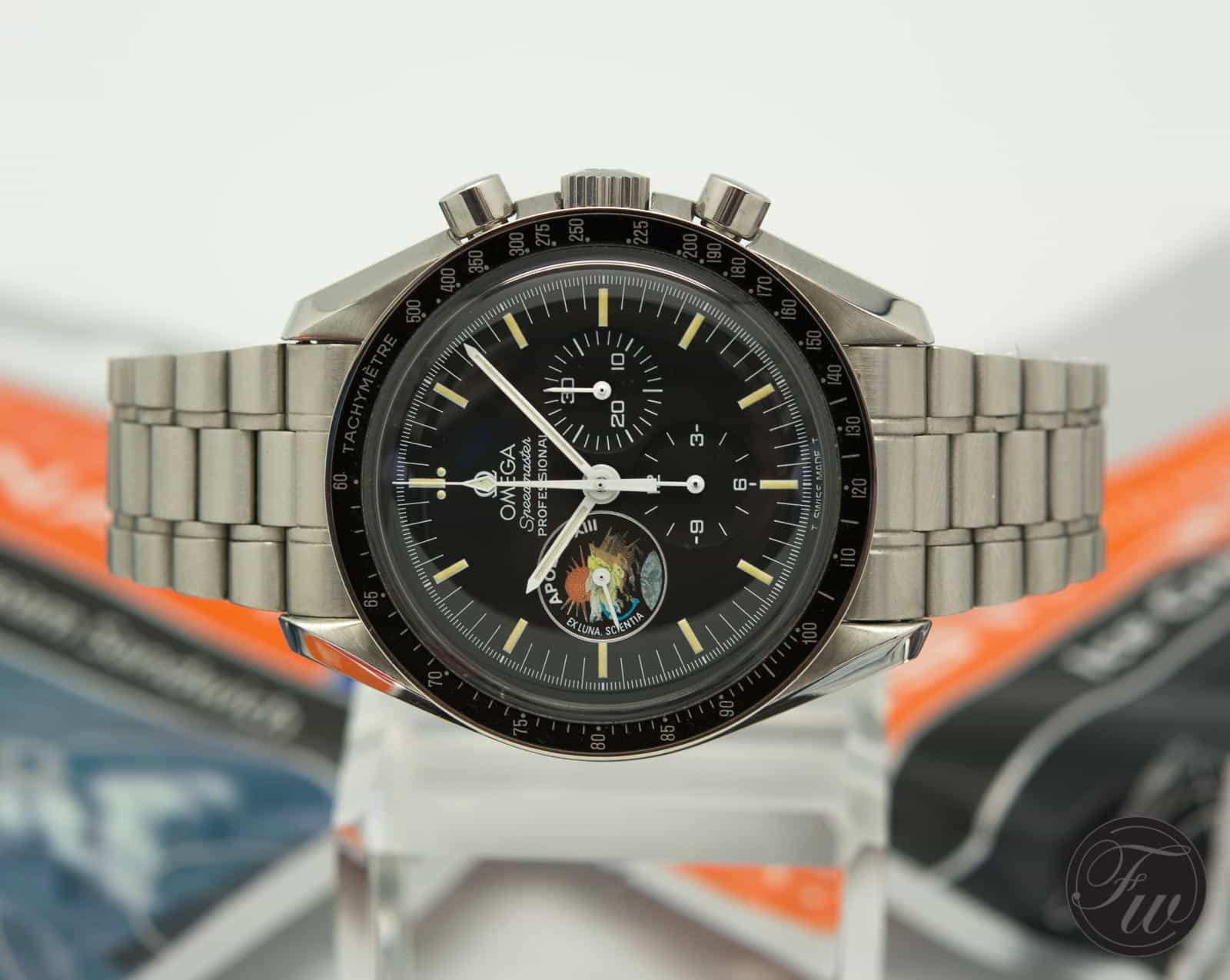 In 1997 and 1998, Omega did 40 Mission Cases with 23 Speedmaster watches each, and an additional 2x 5 of these cases that weren’t supposed to go on the market (but some of them did). In these Mission Cases, there was also a similar Speedmaster Professional 3595.52 Apollo XIII model, but with the later ref.1499 bracelet. So I guess there are 1049 in total of these Apollo XIII mission patch Speedies. These 50 additional Apollo XIII Speedmasters have a Super LumiNova dial and hands. This 1995 model should come on a reference 1479 bracelet. It is quite a hair puller to be honest, but I love the look of the bracelet a lot. It tapers nicely towards the clasp and is not as smooth and shiny as the later bracelet references.

One last word on the case of my watch. When I was visiting Houston last May for the Speedmaster Event organized by Omega, we also get to see the NASA Johnson Space Center. Besides having a look at the Apollo mission control centers and one of the development facilities, we also had a look in their museum. In the museum they exhibit the original Apollo 17 Command Module that the crew used to get home safely. In a flash, I decided to mark my Speedmaster Professional 3595.52 Apollo XIII I was wearing that day, by scratching it to the door of the Apollo 17 Command Module. So hence the little mark on the case band. The Command Module is so smooth, that it took quite a bit of force to get only a tiny scratch, so it required a couple of tries. 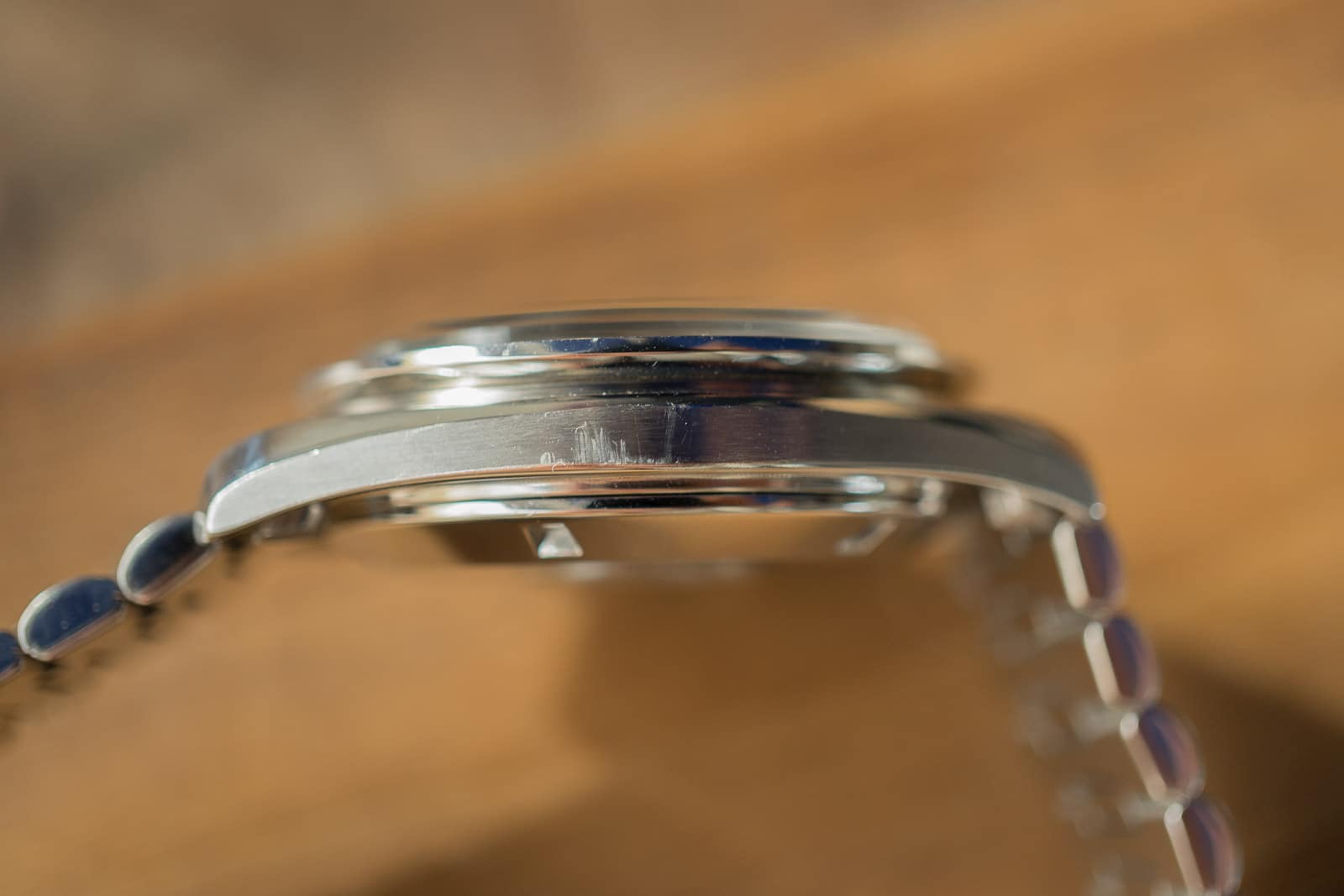 It is a wearing piece, so it will get scratches anyway, so why not making sure it has at least one scratch with a bit of history.

The hand-wound caliber 861 movement was in production until 1997, so it is also fitted in this Speedmaster Professional 3595.52 Apollo XIII watch. A reliable and trustworthy caliber that Omega has used almost 30 years since 1968. There are some variations of the caliber 861 movement, but in essence they are the same. The later 1861 movement has a rhodium finish (instead of copper or gilt) and an extra jewel, much like the 861L (“Luxury finish”) that could be found in a few 1980s models. When I buy a pre-owned watch I always make sure the seller hasn’t wound it when I come to see it, so I can try the crown and give it a full wind. The 861 makes a little rattle sound when winding but feels very soft when doing so. I also like to try the chronograph pushers and at least keep it running for a minute to two minutes to see if at least the minute counter works and also properly resets to zero when the chronograph is used.

Like many special editions or limited editions at the time, the Speedmaster Professional 3595.52 Apollo XIII came in this flat square black leather box. A bit more flat than the red leather Omega boxes at the time. They also do not seem to decay as the red leather boxes tend to do. I have several red leather Omega boxes from the 1990s and it is not a pretty sight. On top of the black box, you will see the “APOLLO XIII” wording embossed in the leather. Insides there is a warranty booklet (world wide service center overview) as well as the instruction book for the caliber 861 movement. Then there is the plastic credit card format warranty card, with the reference number (3595.52.00) and serial number (mine starts with 48,xxx,xxx) a date and dealer stamp. In the box you should also find the fabric Apollo 13 mission patch. I wonder if anyone sewed it onto their jacket, I am afraid so to be honest. Then there is the authenticity certificate, which it really isn’t to be exact. It has a bit of documentation (mine is in German) on the Apollo 13 mission as well as on the watch, stating that it is a limited edition of 999 pieces. But no specific number (234) or signature to confirm it is authentic like we’ve seen on some of the other limited edition Speedmaster Professional watches. It is a nice “extra” though. 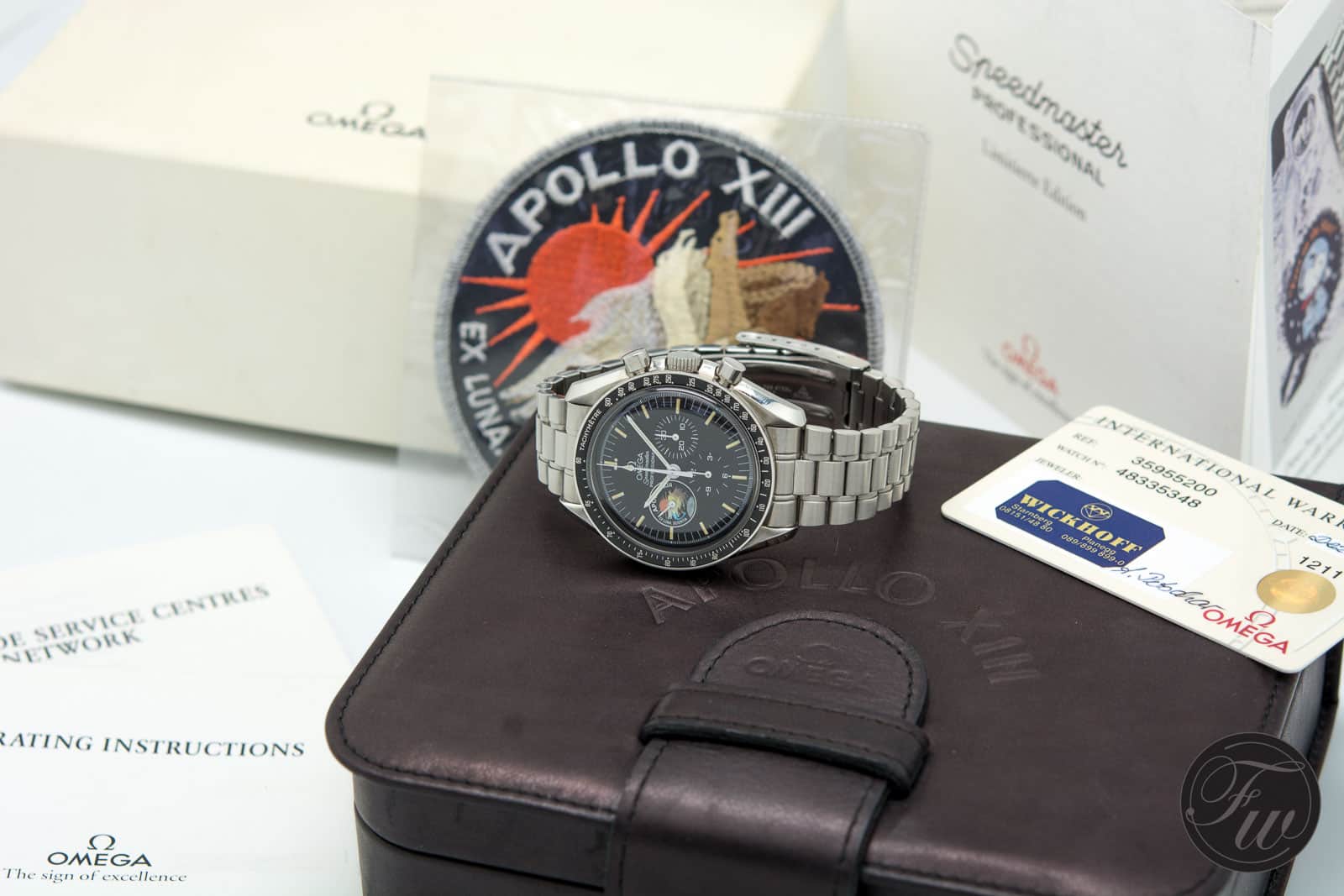 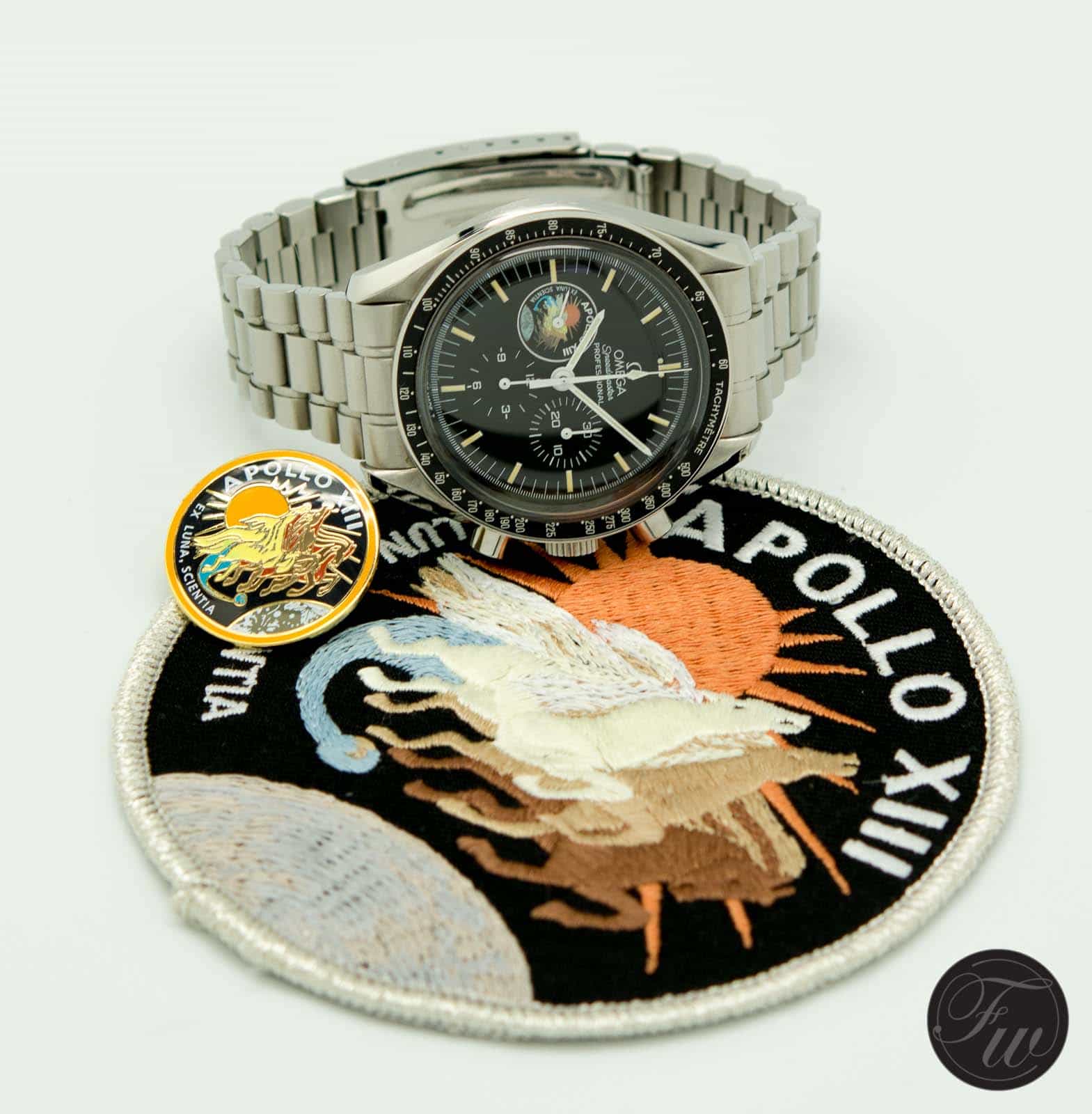 Apollo XIII patch and lapel pin. Both from the NASA gift shop in Houston.

On the wrist, valuation and availability

To be honest, this watch is perhaps one of the limited editions I like best (although the new Silver Snoopy and I are in our honeymoon weeks) together with the 2003 Snoopy Award model. Purely aesthetically speaking, the dial is just awesome because of the mission patch design and the yellow-ish patina of the hands and hour markers. That, together with the reference 1479 bracelet, or a nice vintage looking strap, makes the watch a great daily companion if you want. Even though 1995 isn’t regarded as being “vintage” by many of you, 20 years will do for some and the watch does already have this appeal in my opinion. 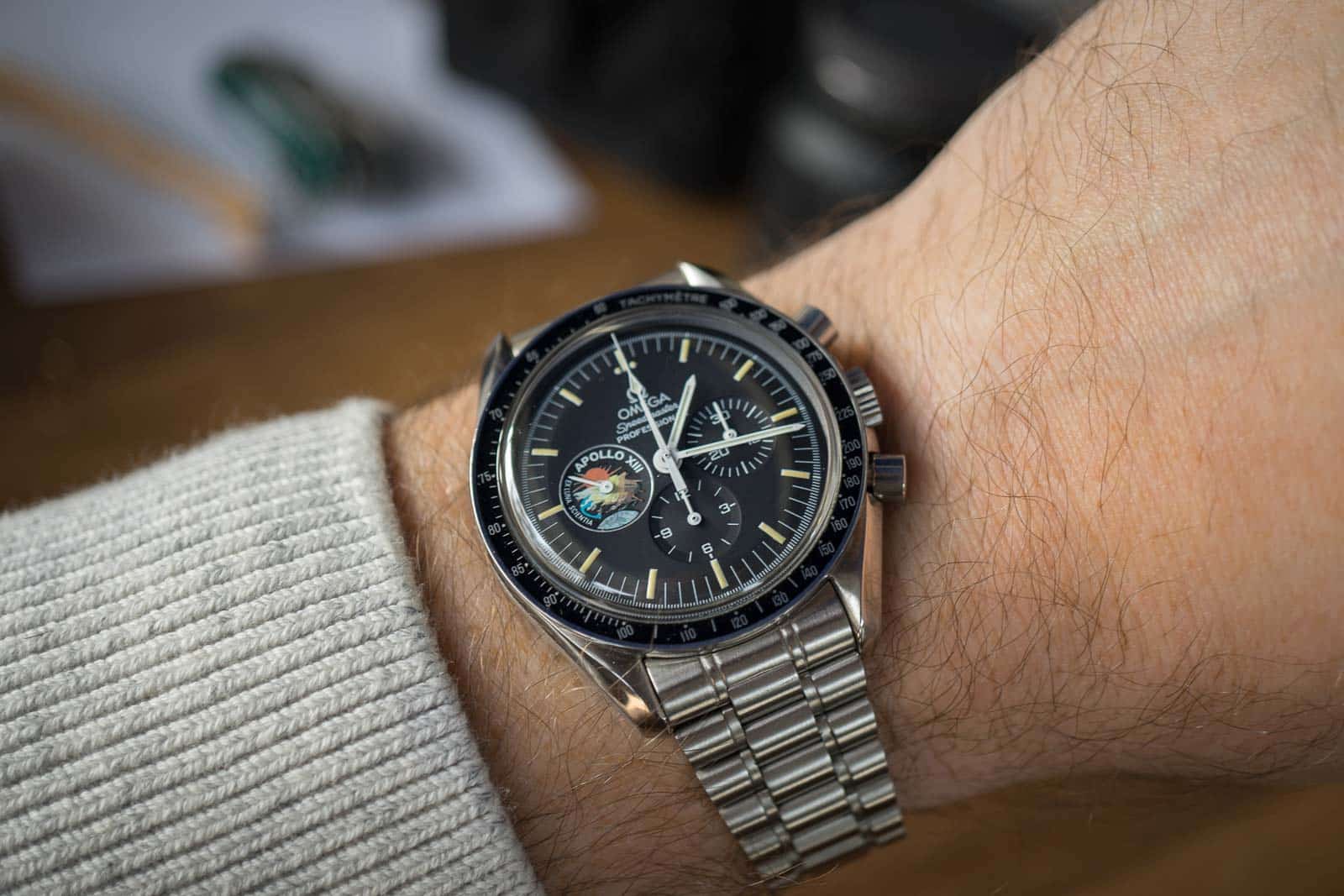 This, combined with the limited number of watches that were produced, could make this a future classic. It is already a sought-after model by Speedmaster collectors and they seldomly appear on eBay or Chrono24. If they do, the prices are quite steep. As mine was part of a trade, it is difficult to say what I exactly paid but I think it would be around the €5000 Euro mark in 2013. I have seen them post-2013 for over €6000 Euro and I guess they rather increase in value then decrease over time. There will be one on auction on December 15th during Christie’s Speedmaster 50 auction which has an estimate between $5000 – $10000 USD. Let’s see what will happen.