Today on Speedy Tuesday, we’ll return to a watch we’ve reviewed before, the Omega Speedmaster Apollo XI 35th Anniversary limited edition. Why is that? First off, selfishly, I get to spend time with one whenever I visit my parents because my father owns the watch you see here. But more importantly, and more germane to events over the last month, this model strikes me as a really great companion piece to the recently released #SpeedyTuesday edition. I say this simply because today’s subject is, to date, Omega’s only Speedmaster Professional done in panda guise that’s been offered globally. Introductions aside, let’s enroll in a refresher course on a beloved limited edition. 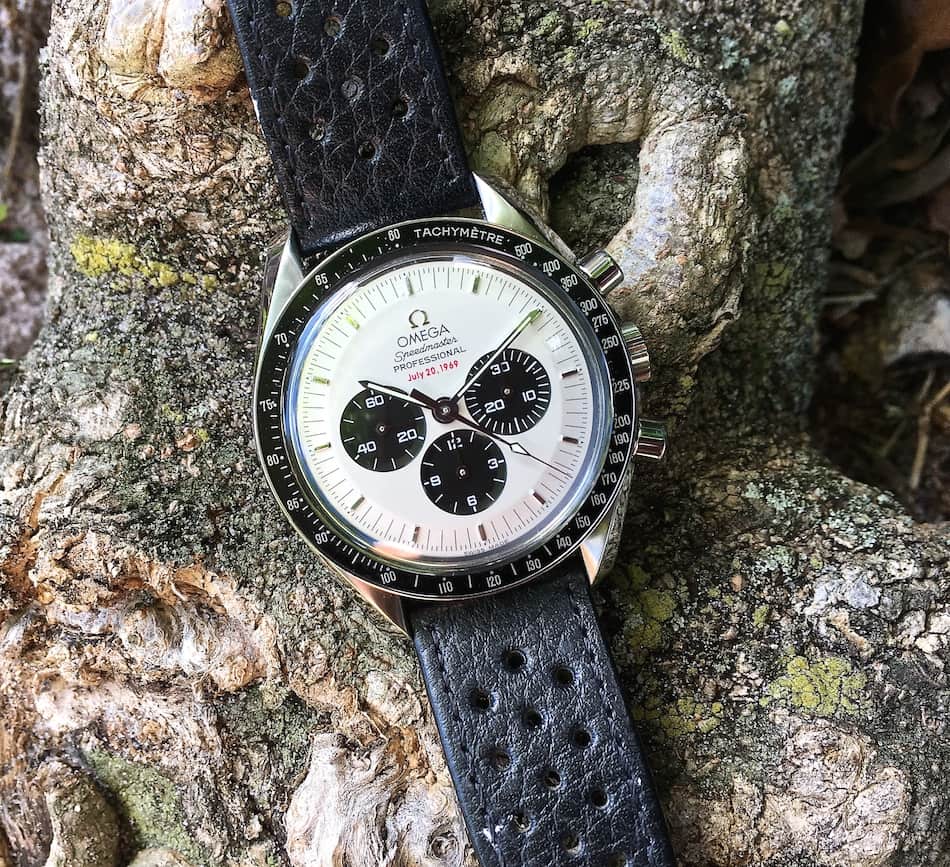 The Speedmaster Apollo XI 35th Anniversary edition was produced in 2004 (yes, mathletes, 2004 was 35 years after the moon landing) in an edition of 3500 pieces.  It’s notable as the first Professional model, aside from those made of gold, to stray from the proven formula of using a dominant black dial. It also started a very brief trend for Omega as the following year’s 2005 limited edition, the Gemini IV 40th Anniversary model, used a gorgeous blue dial with white registers. Aside from the meteorite-dialed Apollo-Soyuz 35th Anniversary piece from 2010, all other steel Speedmasters have basically had registers of the same color as the rest of the dial. 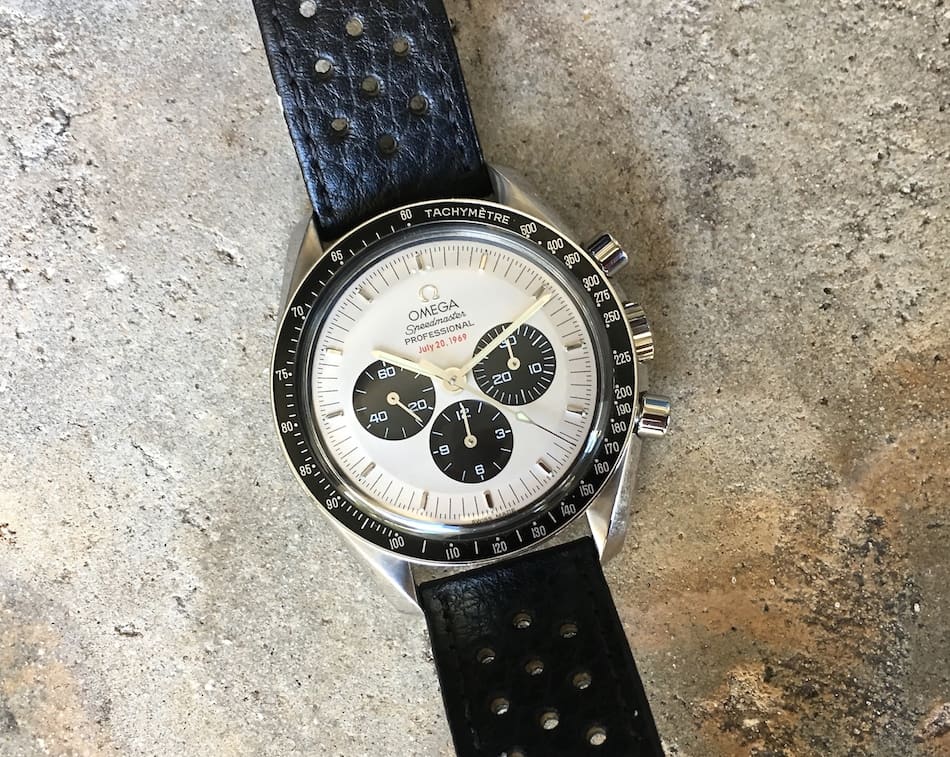 The First and Only Panda Speedy Pro for the Globe…

A contrasting dial, though, isn’t what makes the Speedmaster Apollo XI 35th Anniversary such a nice looking model. The attraction, for me, is tied to the fact that it’s a panda. The formula of white dial and black sub registers is such a tried and true formula that I’m surprised that Omega only got around to making something like this in 2004 (ok, they made 300 nearly similar pieces in 2003 for Japanese department store Mitsukoshi) and that they’ve never returned to the theme. On the other hand, we’ve seen some brands release limited edition models that collectors clamor for and then the brand spoils the intrigue by making the model into a regular production piece. So, good on Omega I suppose! 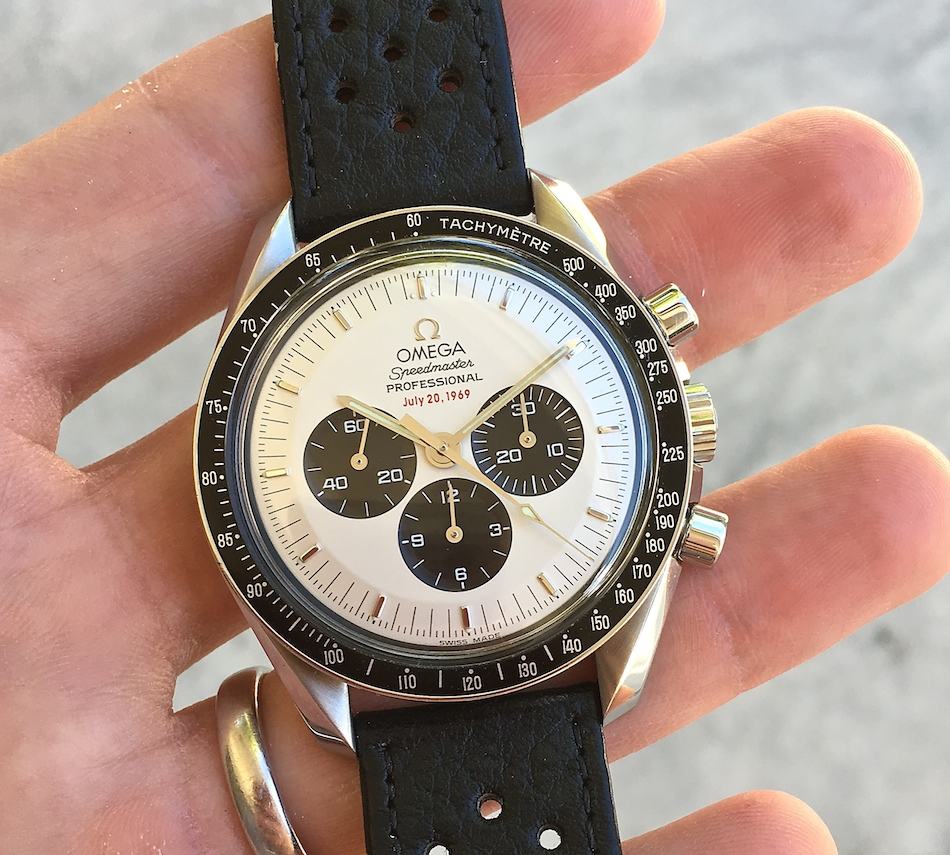 Stepping away from the dial colors on the Speedmaster Apollo XI 35th Anniversary, some other details add up to a really well thought out model. Firstly, there’s a return to the applied logo on the dial. Even though it’s the revised, modern logo, it’s a high quality touch that I frankly wish was on regular production Moonwatches. The hour markers on this edition are also applied and polished to continue the theme. But mustn’t readability be compromised in the dark without the printed strips of lume? Look closely and you’ll see lume pips at the end of each index and on either side of the marker at 12:00. Polished metal is also the theme for all the hands in lieu of the standard white (no, that wouldn’t have worked very well here). A Limited Edition with Mass Appeal

And while there’s no true “step dial” on this version, the white background makes the elevation change from the edge of the dial to just inside the indices seem more pronounced. Hash marks between the hours are in black as is the model name. Red is the chosen color for that famous date of July 20, 1969 and it provides the watch some subtle pop. White, non-radial, numerals are used within the sub registers. All told, the Speedmaster Apollo XI 35th Anniversary is a great looking watch and it dials up the seriousness when compared to some of the other LE’s released over the years. In comparison to some of the semi-kitschy releases, it actually strikes me as a watch that would have appealed to collectors and non-collectors alike upon its release due to its attractive design. And while my father didn’t buy this watch new, this Speedy’s striking looks are what ultimately led him to taking it home. 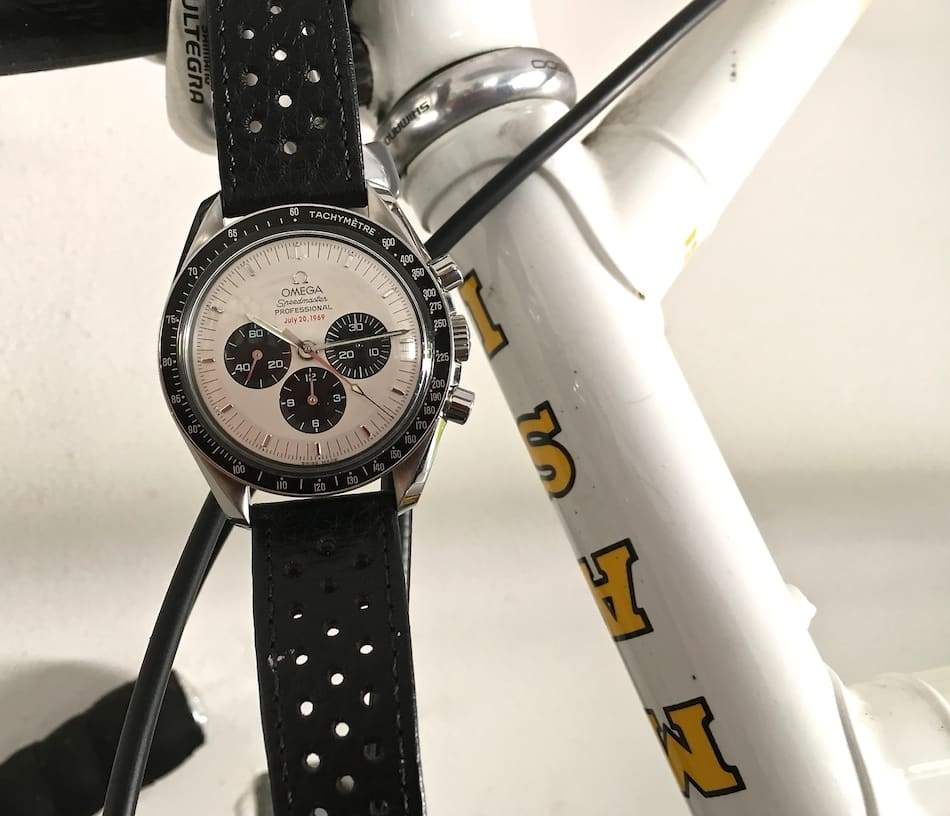 Stumbling Upon this Speedy…

I’d bet it was in 2007 or 2008 when my Dad gave me a buzz and let me know that he had picked up the Speedmaster Apollo XI 35th Anniversary edition. He explained that he and my mother were out to have dinner at a local mall and had some time to kill before getting their table. They wandered around a bit and walked into the local Tourneau. This wasn’t a normal Tourneau, though.   It had a different name, which escapes me, and primarily carried lower cost, more accessible watches. It did, however, have a pre-owned section that often featured watches more expensive than the new brands in the shop. It was here that the Speedy lay in wait and my Dad tried it on and snapped it up for some ridiculously low price – ok, it was missing box and papers, but this wasn’t so strange for Tourneau. 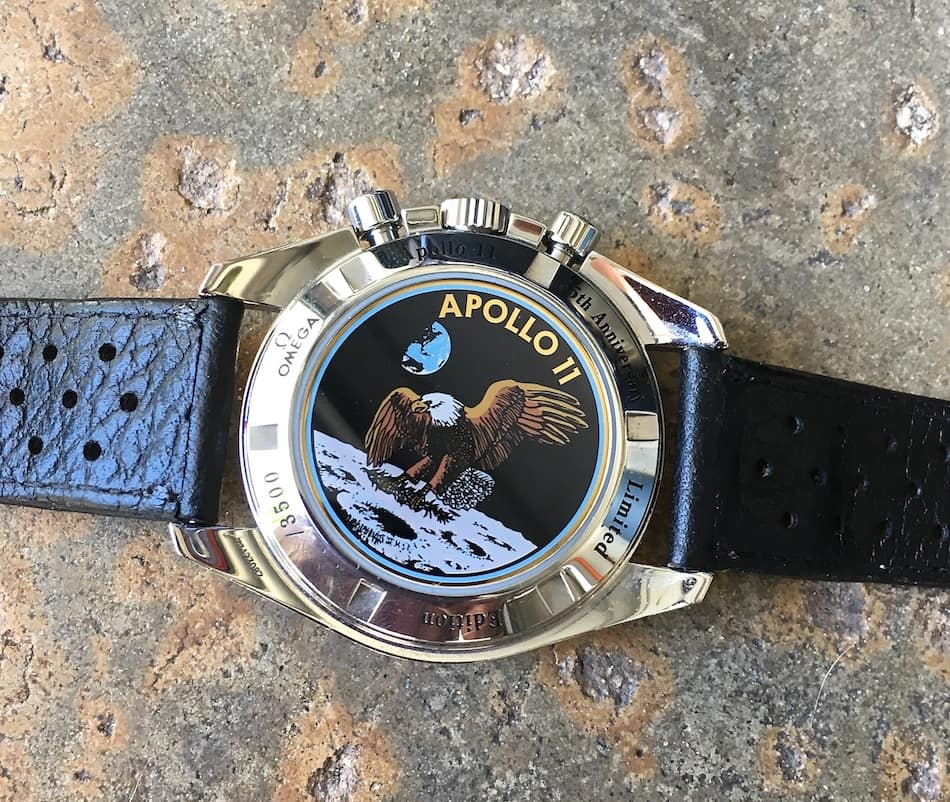 When my Dad called about the Speedmaster Apollo XI 35th Anniversary, he explained its dial colors, its beautiful sapphire mission patch logo back and the fact that it was a really unique looking Speedmaster. He even liked that it contained the Hesalite crystal and familiar manual wind ref.1861 movement inside. So, here was someone that knew nothing about this model who happened upon it and had to have it. Funnily enough, I knew nothing about this model at the time! 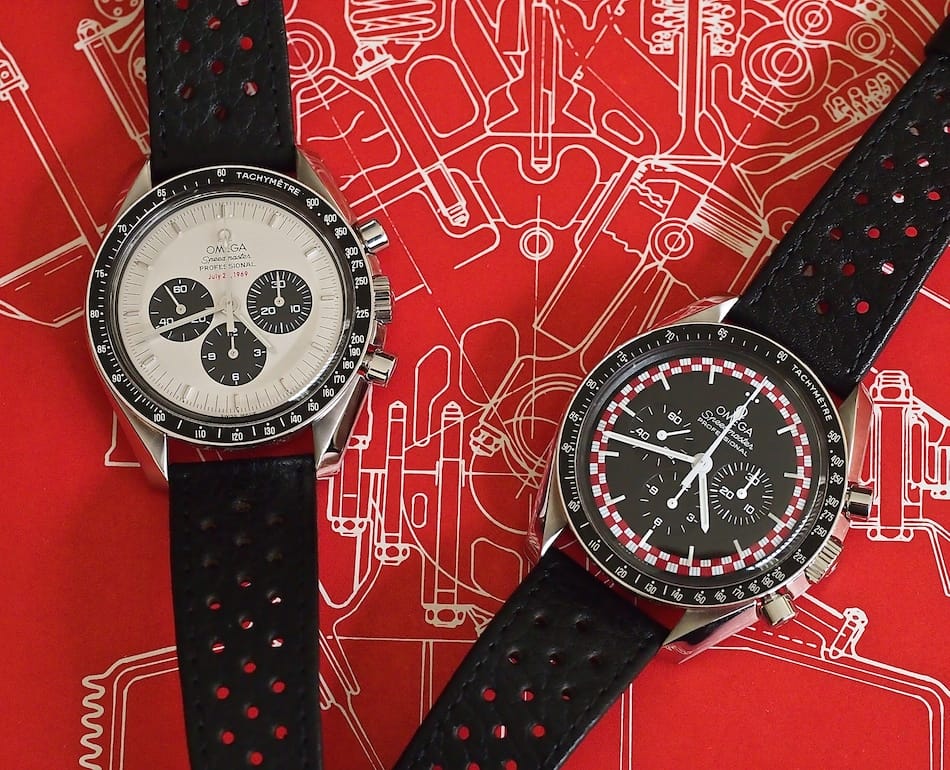 Looking Great on a Strap

As you can see, a leather “Corfam-style” racing strap, made by Giuliano, has been fitted to the Speedmaster Apollo XI 35th Anniversary. This watch came with the same bracelet as today’s Moonwatch and, like in most applications, it overpowers the subtlety of both the case and the dial. It looks ok when posing on a table, but something is lost on the wrist. So, a thin 20mm/16mm strap was ordered and a stainless Omega pin buckle was purchased at the local Omega boutique. It makes for a sporty look that truly showcases that beautiful dial. 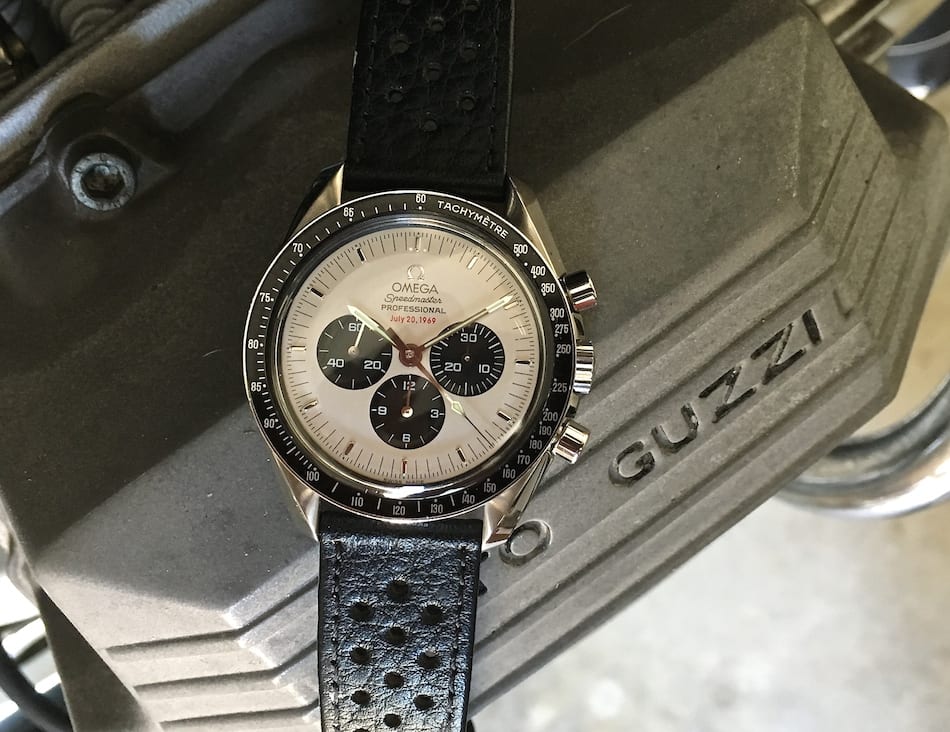 A Very Popular Speedy for Collectors

As far as popularity, the Speedmaster Apollo XI 35th Anniversary likely rests within the top 5 of all LE’s. That says a lot because Omega has certainly released a number of them and I actually think that they’ve been on a tear over the last 5 years. Because of this edition’s popularity, they don’t come up for sale too often. I check eBay now and then and it’s been awhile since I’ve seen one. On chrono24, I saw a handful with prices from $7,500 to $10,000. So, they’ve certainly appreciated versus five or so years ago when they would list at roughly $5,000. Furthermore, it seems that most are in the hands of avid collectors who are loath to get rid of them. 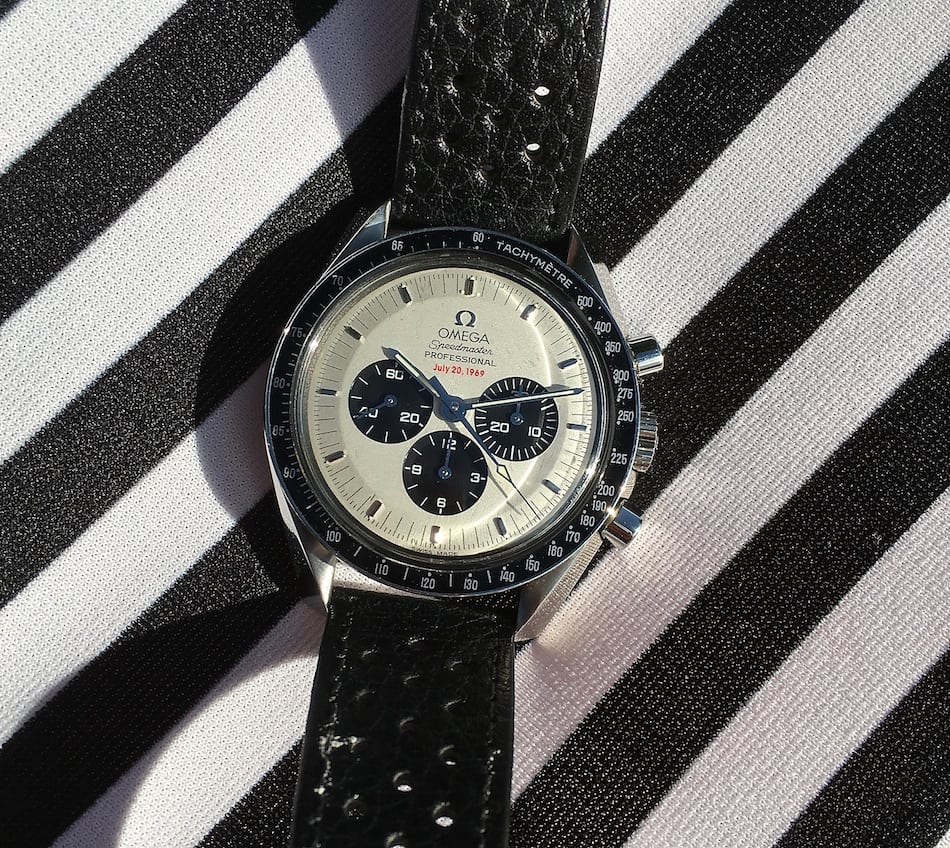 The Speedmaster Apollo XI 35th Anniversary is one of my favorite Speedmasters. It’s crisp and clean and brings in one of my favorite chronograph color schemes – I do admit I’m more of a reverse panda junkie. It’s one of those once common watches that have now become uncommon. But, you never know when one might show up as a good deal. Regardless, I’m looking forward to taking some great side-by-side shots with this model and the upcoming reverse panda piece this summer.