The early 2000s saw some great Moonwatch variations for collectors. Unfortunately, it was during a time where I was still a student and didn’t have the means to go after that Mitsukoshi, Snoopy, Japan Racing, or this Apollo XI 35th anniversary edition from 2004.

All of these watches have long since sold out, but you can still find them on the pre-owned market. Very occasionally, you might find them in NOS (New Old Stock) condition. When it comes to regret, there are few watches I regret missing out on more than this Apollo XI 35th anniversary model. One year before its release, Omega released a special edition for a Japanese department store called Mitsukoshi (an AD of Omega’s at the time). It featured pretty much the same configuration as the Apollo XI 35th. I fell in love with it. And I fell hard. Rumor has it, I’m still falling to this day.

I visited the Mitsukoshi department store in Tokyo a few years ago. It stands across the street from the WAKO department store (which is still an authorized Omega dealer). These days, it feels more like a tourist thing. Large displays with as many watches as possible are crammed in there. It suffers, in my opinion, from the same problem as most luxury stores. Stuffing displays full of watches is the opposite of the “so-called” luxury experience. It is all about the Excel sheet of the store instead. Anyway, retail lamentations aside, let’s talk about the Speedmaster  Apollo XI 35th Anniversary edition. 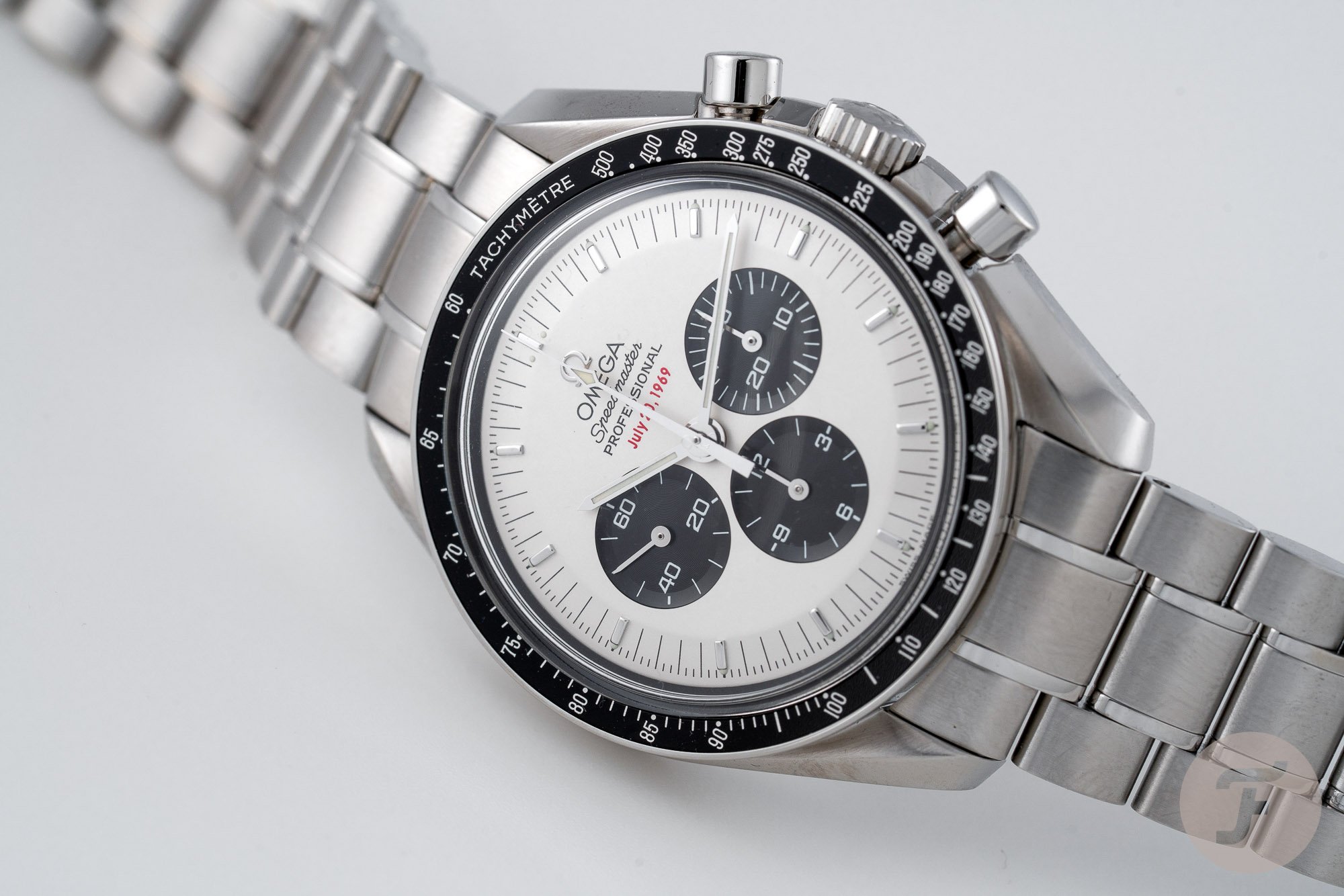 Those of you with a sense of numbers already noticed the year of the Moon landing concealed within the reference number of the watch (3569.31). I think it is a fun thing to do for their Apollo XI limiteds, but off the top of my head, I believe this is the only one with “69” in the reference number (except the -69 designators on the vintage ones). Correct me if I am wrong though. Please, just shoot me a message.

This is the only one with “69′”in the reference number

The case, bracelet, and caliber 1861 movement of this Apollo XI 3569.51 are exactly the same as those of the regular Speedmaster Professional from that era, the reference 3570.50 Moonwatch. The dial, case back, and packaging (more on that later) make this watch special. 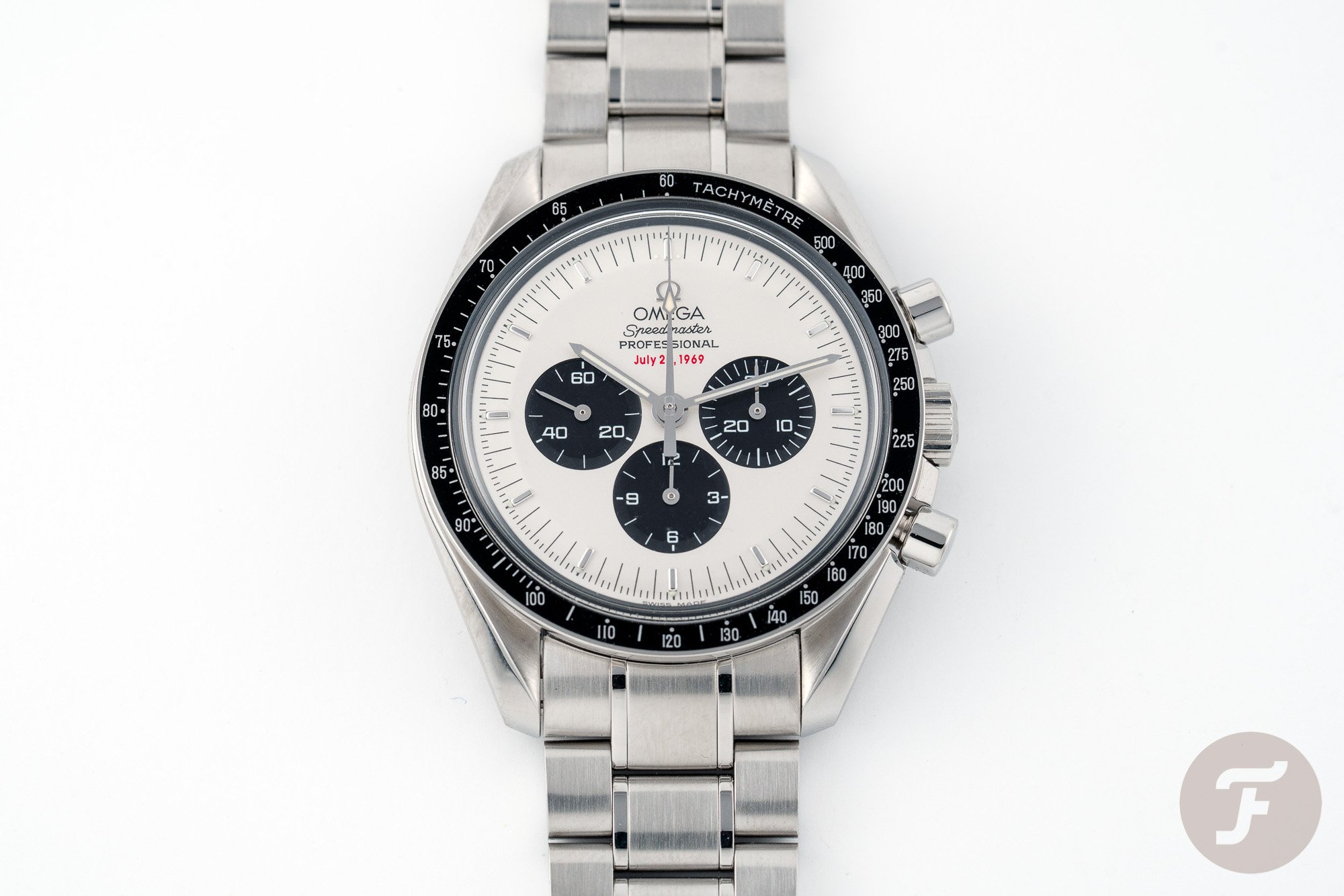 The panda dial (so named thanks to the white face and black subdials reminding you of the face of a panda bear) isn’t new to the Speedmaster in 2004. There has been a Speedmaster Reduced with a Panda dial, but also a Speedmaster Professional with an almost identical dial, as described in the introduction of this article. The dial of the Mitsukoshi is a bit more monochrome, as the Speedmaster Apollo XI 35th anniversary has the landing date of the Apollo 11 mission printed in red below “Professional”. Both watches are quite sought after. This is not only because of the association with Mitsukoshi or Apollo XI but also due to the contrasting subdials. It just looks good.

The same goes for the blue-faced Gemini IV, for example. Or even for the Speedmaster Speedy Tuesday (reverse panda) that we did in collaboration with Omega. But for a more recent example of a true panda, we have to come a little closer to the present day. In 2018, Omega introduced a special series of five Speedmasters for the upcoming Tokyo 2020 Games. Some of these models were (heavily) inspired by already existing Speedmaster models, with a little twist. You can find all five of them in this article that I did at the end of 2018. One of the models of this set is another Panda, making it the third and most recent proper panda dial Speedmaster Professional. Below, the Tokyo 2020 edition panda dial Speedmaster. 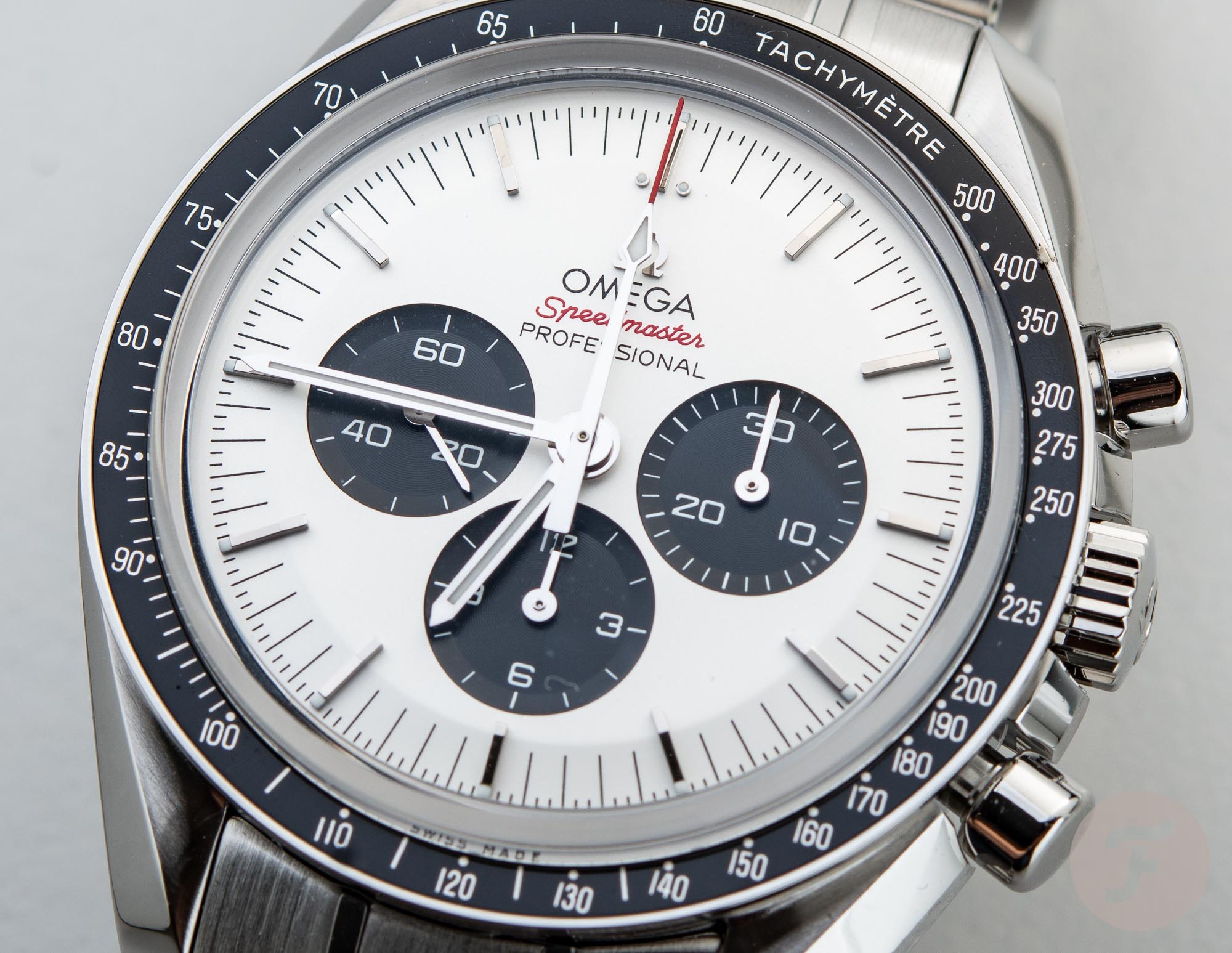 There are more differences between the Tokyo 2020 panda dial above and the Apollo XI 35th anniversary (and Mitsukoshi) dials. The markers are different, the printing is different, and the chronograph second hand is different, of course. Not everyone was happy with the re-release of a past model, but it seems not to have mattered. All Speedmaster Tokyo 2020 watches sold out handily. The Fratello favorite is the red bezel model that we dubbed the “Rising Sun” in this article. We like it not only because of its design but also because it was basically a new addition to the Speedmaster Professional designs. And a welcome one at that. 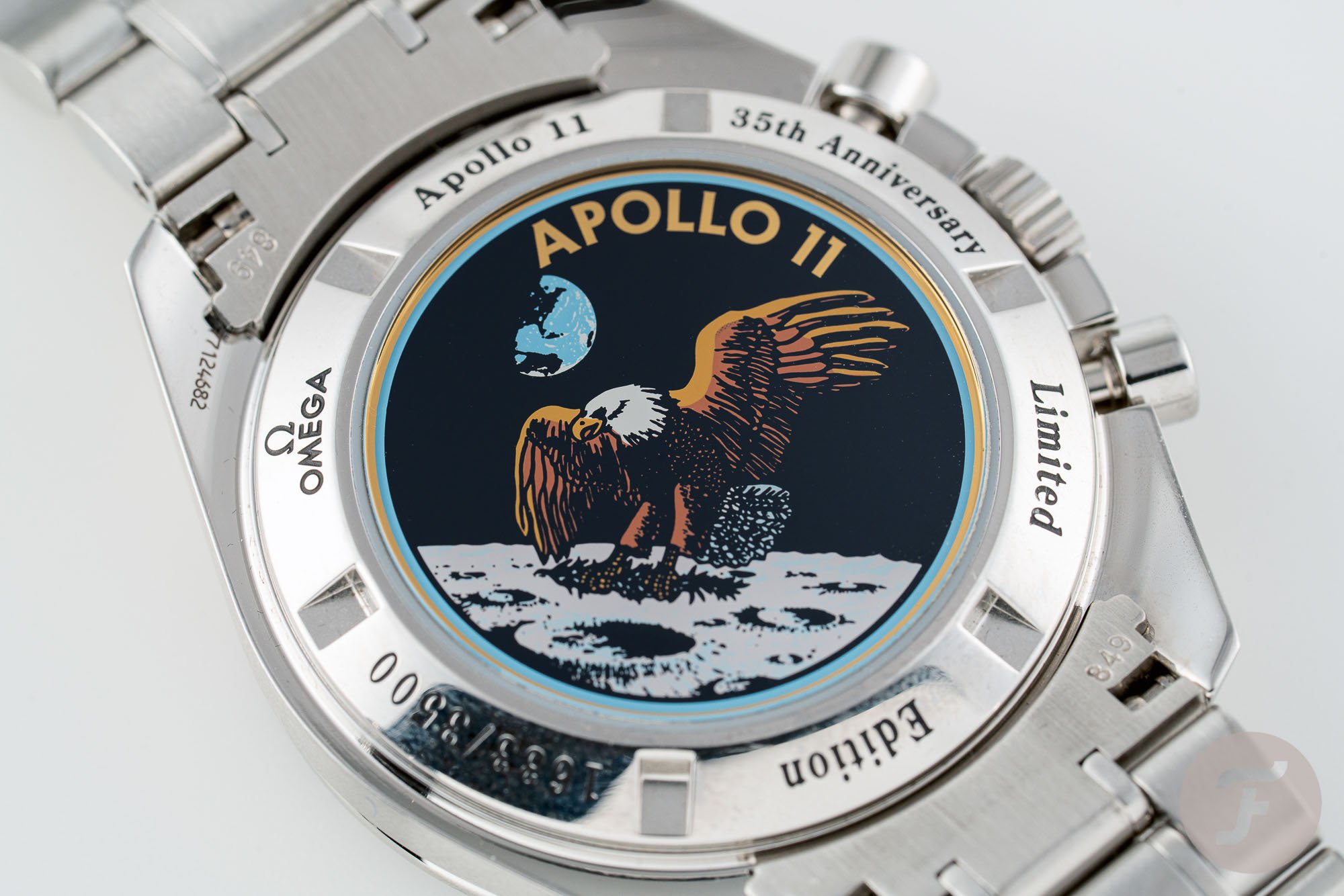 “Houston, Tranquility Base here. The Eagle has landed”. Words were spoken by Neil Armstrong, about 18 seconds after he and Buzz Aldrin landed successfully on the Moon. The mission patch of Apollo 11 was designed by the astronauts, a tradition that started with Gemini V.

Interesting is that the names of Apollo 11 astronauts Aldrin, Armstrong, and Collins are not mentioned on the patch. Michael Collins explained: “We wanted to keep our three names off it because we wanted the design to be representative of everyone who had worked toward a lunar landing, and there were thousands who could take a proprietary interest in it, yet who would never see their names woven into the fabric of a patch. Further, we wanted the design to be symbolic rather than explicit.”*

James “Jim” Lovell came up with the idea of the eagle

Around the edge of the case back you’ll also read the limited edition number of the watch, one of 3,500 pieces. A nod to the 35th anniversary, of course. 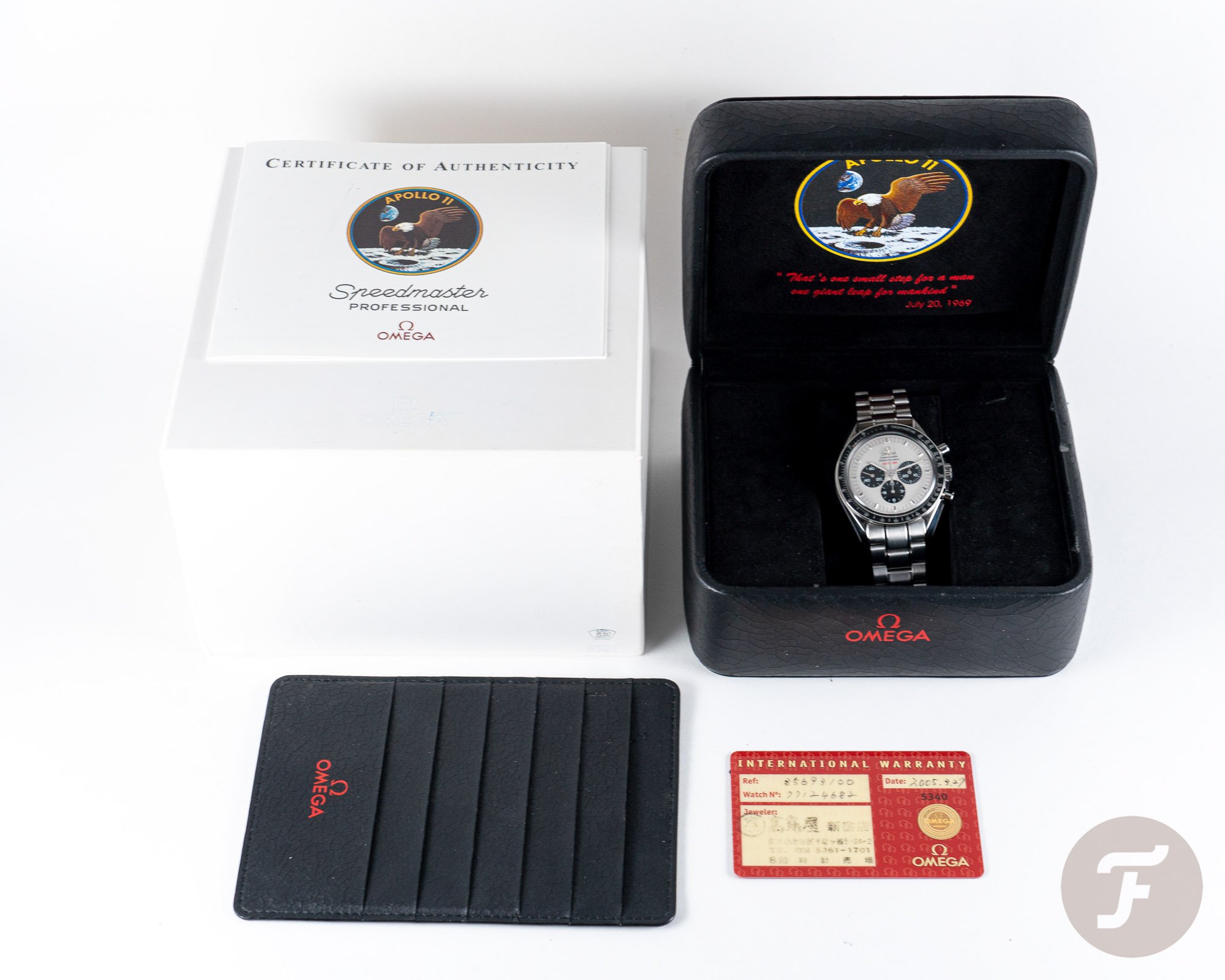 Omega has its way with special packaging for their limited edition Speedmaster watches. Especially in recent years (the Speedy Tuesday II “Ultraman” is a perfect example) the brand has been known to go all out. The Speedmaster Apollo XI 35th anniversary comes with a special box as well, be it a bit more modest. It is a black version of the famous red leather boxes, with the Apollo 11 patch inside. As you can see, the leather cracked over time, which is a common thing to happen to these older type boxes. There’s an accompanying Certificate of Authenticity with a description of this limited edition, the unique number matching the one on the case back of the watch and a signature from then Omega CEO Stephen Urquhart.

These watches are becoming rare, especially in unused condition. The Mitsukoshi (limited to 300 pieces) is even rarer, becoming something of a grail. The Speedmaster Apollo XI 35th anniversary edition 3569.31 can be found pre-owned starting around €9,000, but often without the proper documentation. A full set in mint condition can go well over €11,000. If you have one, cherish it and enjoy it! These watches are made for wearing.