I have seen them a couple of times now, in BaselWorld of course, but also during the Speedmaster Event in Houston as well as a preview at the Omega Boutique in Cannes where I was a few weeks ago. So often enough (with some time in between) to develop an opinion on these ceramic Speedmaster watches.

A bit of history on the ceramic Speedmaster watches

But let me start with the first Dark Side of the Moon (here is our review of the Dark Side of the Moon), the watch that was introduced in 2013. There is something strange about this watch to begin with. I noticed that it is the first Omega that got people drawn to this brand, people who normally are not attracted by Omega watches for whatever reason. It is also liked by those who normally think only vintage Omega (Speedmaster) watches matter. Perhaps the latter audience is even more difficult to convince than the first one. Besides these two groups, there are of course the Speedmaster fans and watch fans in general that just love it for what it is: a ceramic cased watch with an in-house chronograph movement based on one of the most historical chronographs out there. Omega hit the right spot with the Dark Side of the Moon. 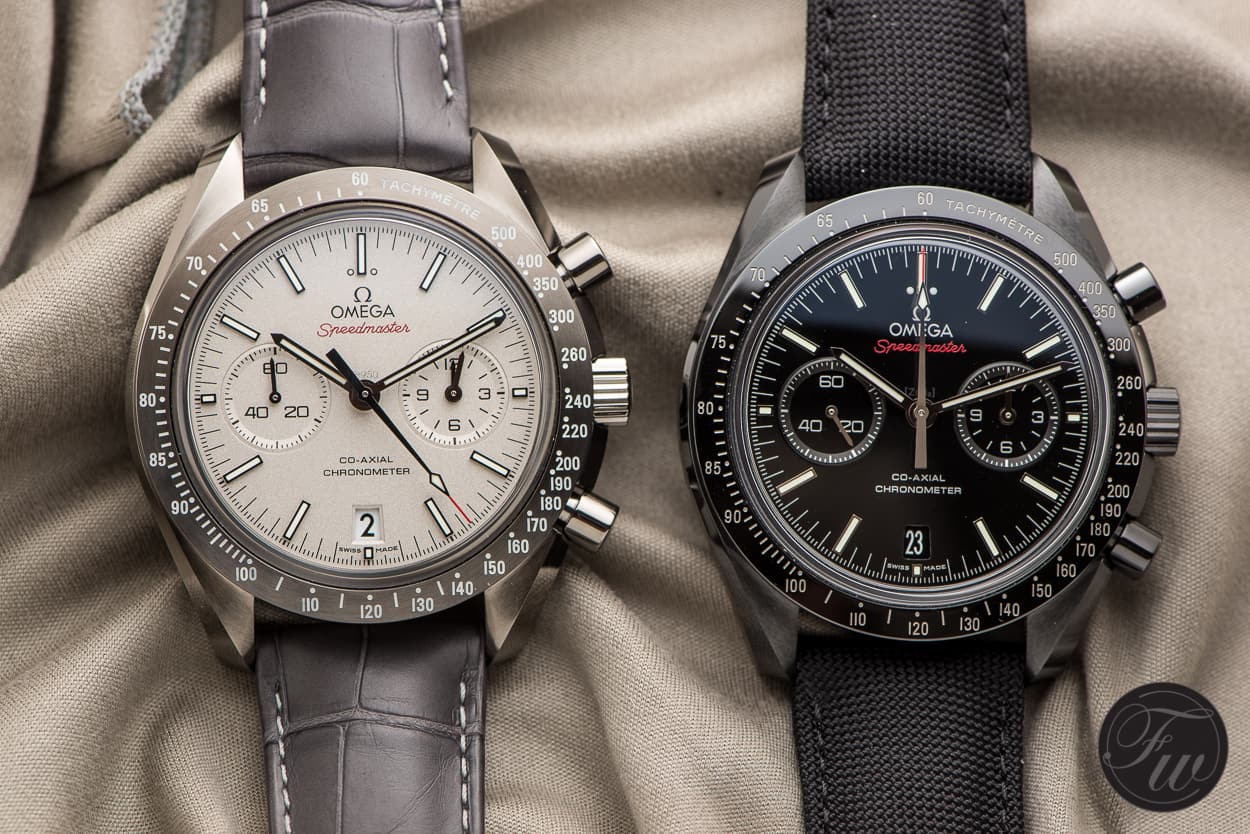 In 2014, Omega introduced the ceramic Speedmaster Grey Side of the Moon. An interesting variant of the Dark Side of the Moon, with a different color casing (based on white ceramics) and with a leather strap instead of the coated nylon strap. Omega created a bit of the Rolex Daytona effect by having these two models. People had a hard time choosing between the two options like with the stainless steel Daytona, black dial or white dial. 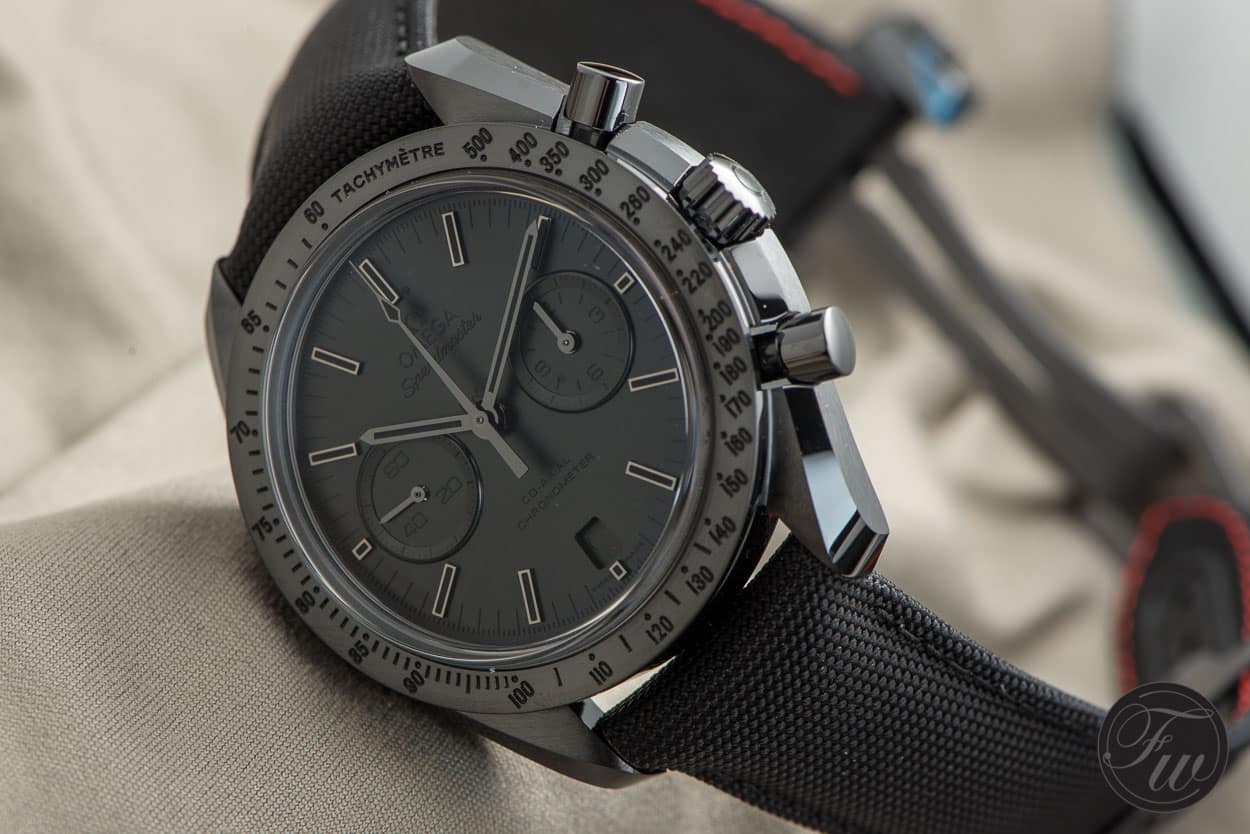 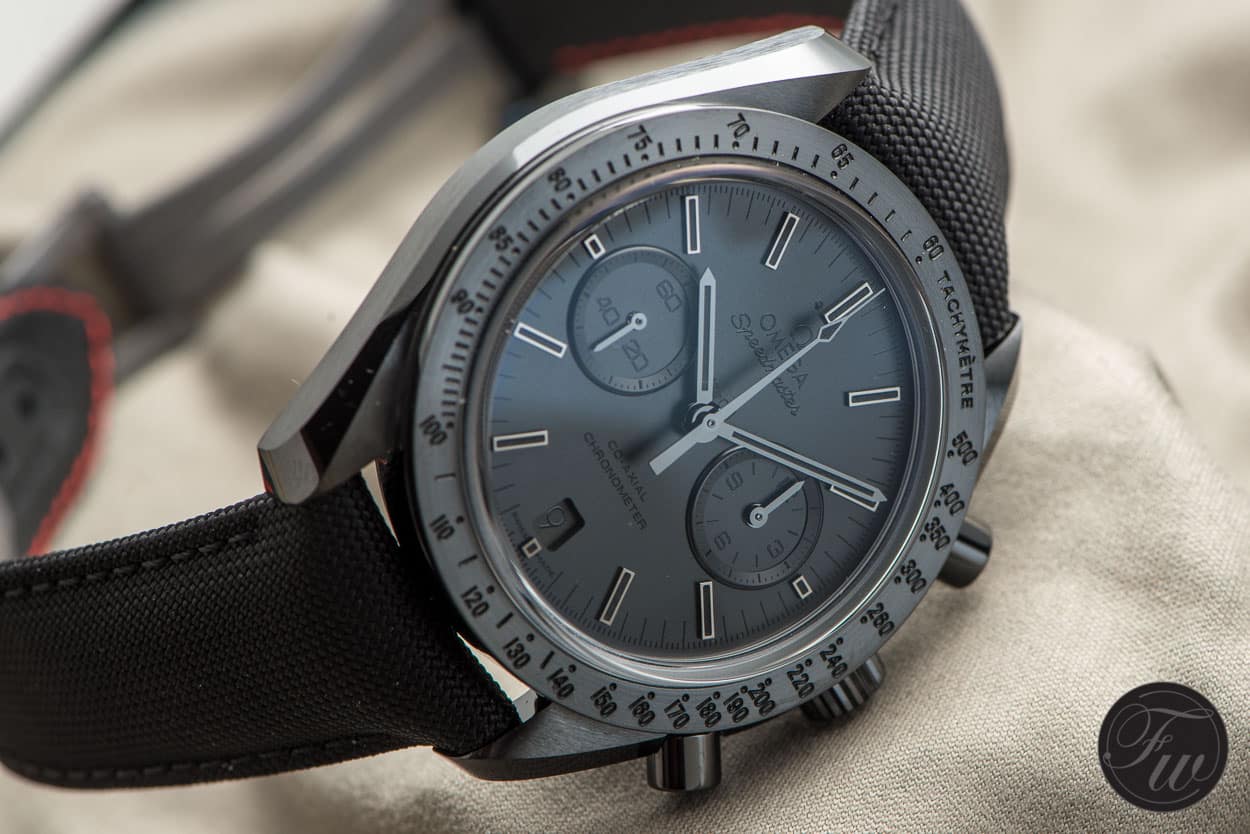 Perhaps the Dark Side model that really does justice to the name of the collection. The Black Black model has a matte black dial and blackened hands and hour markers. The printing on the dial and date disc is also blackened, which makes it a very ‘dark’ timepiece (which was the idea). I have seen similar concept with other brands and have to admit that I am not really into this type of watch. Although you can read the time on your phone, laptop, church clock or whatever, your watch shouldn’t make it too difficult to properly read the time. The ceramic Speedmaster Dark Side of the Moon Black Black has a list price of €10,600 Euro. This model comes on a coated nylon strap with folding clasp. 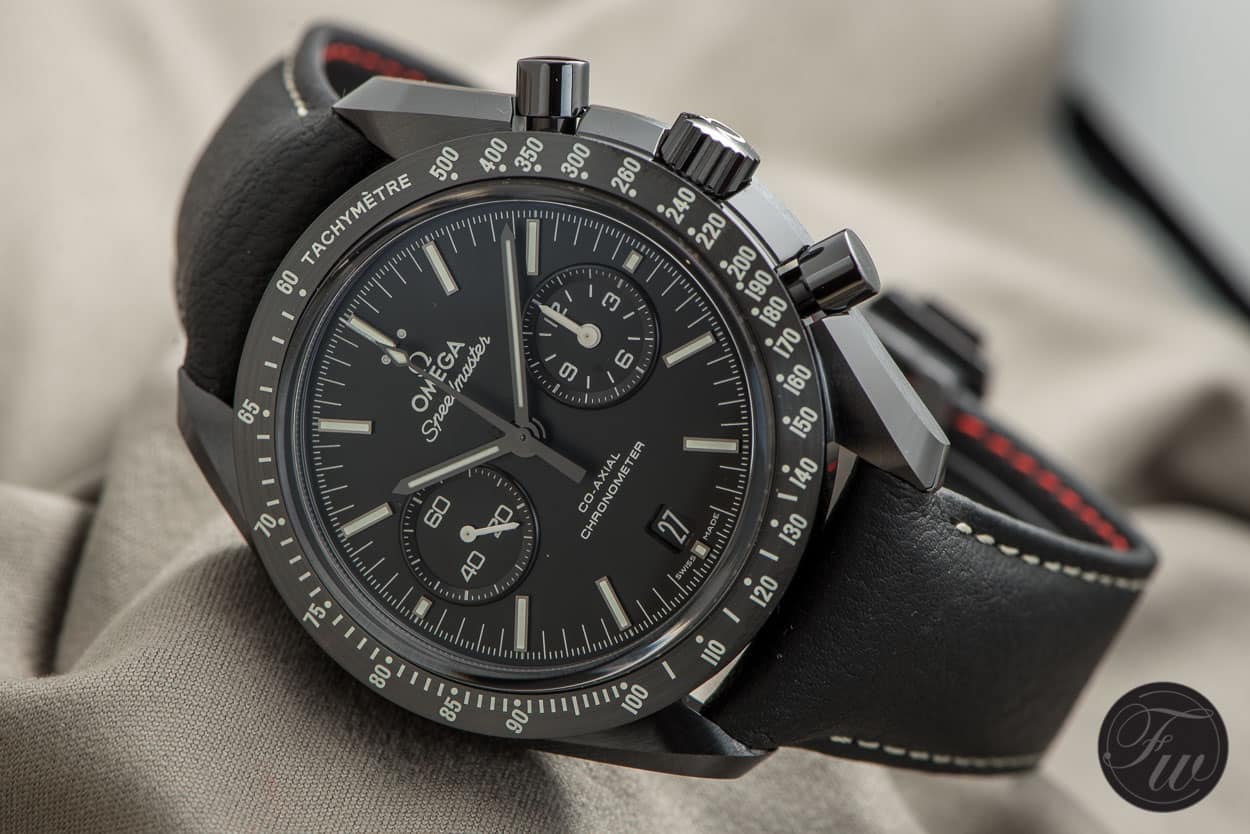 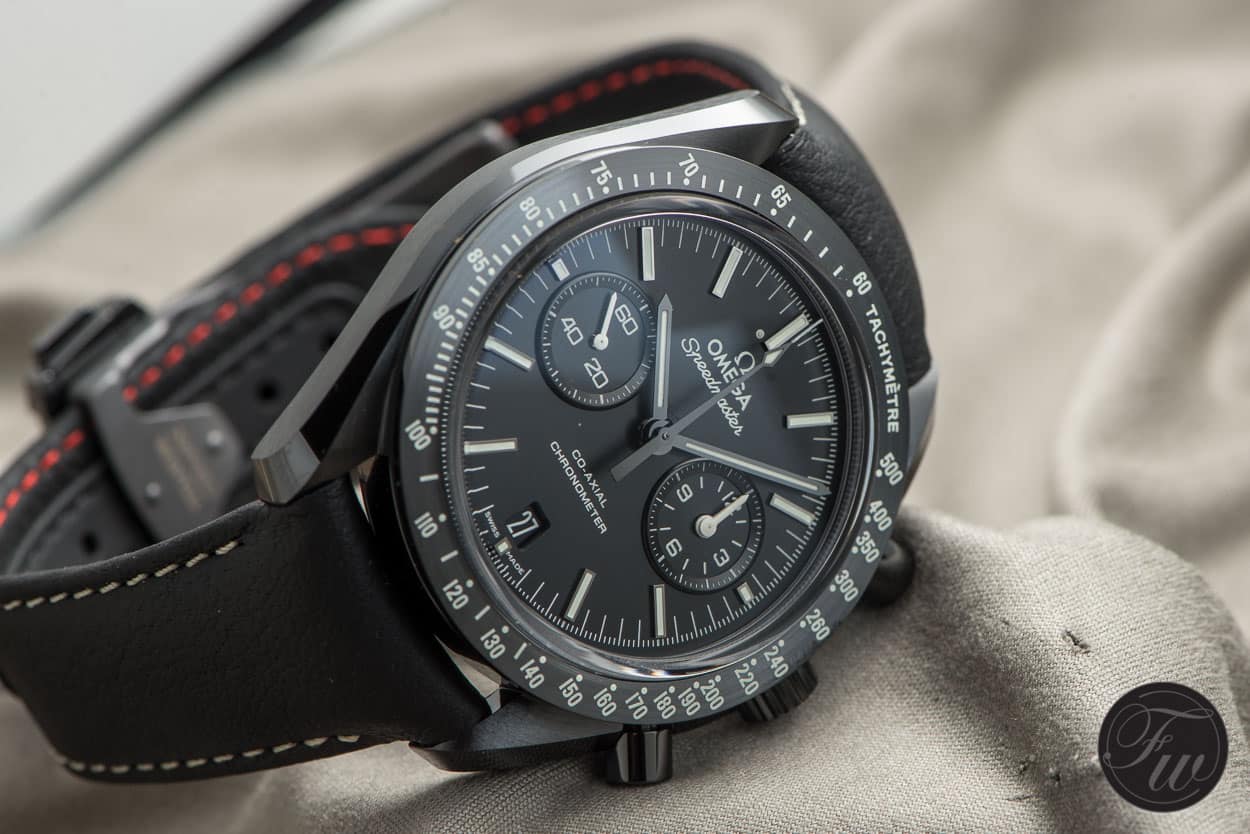 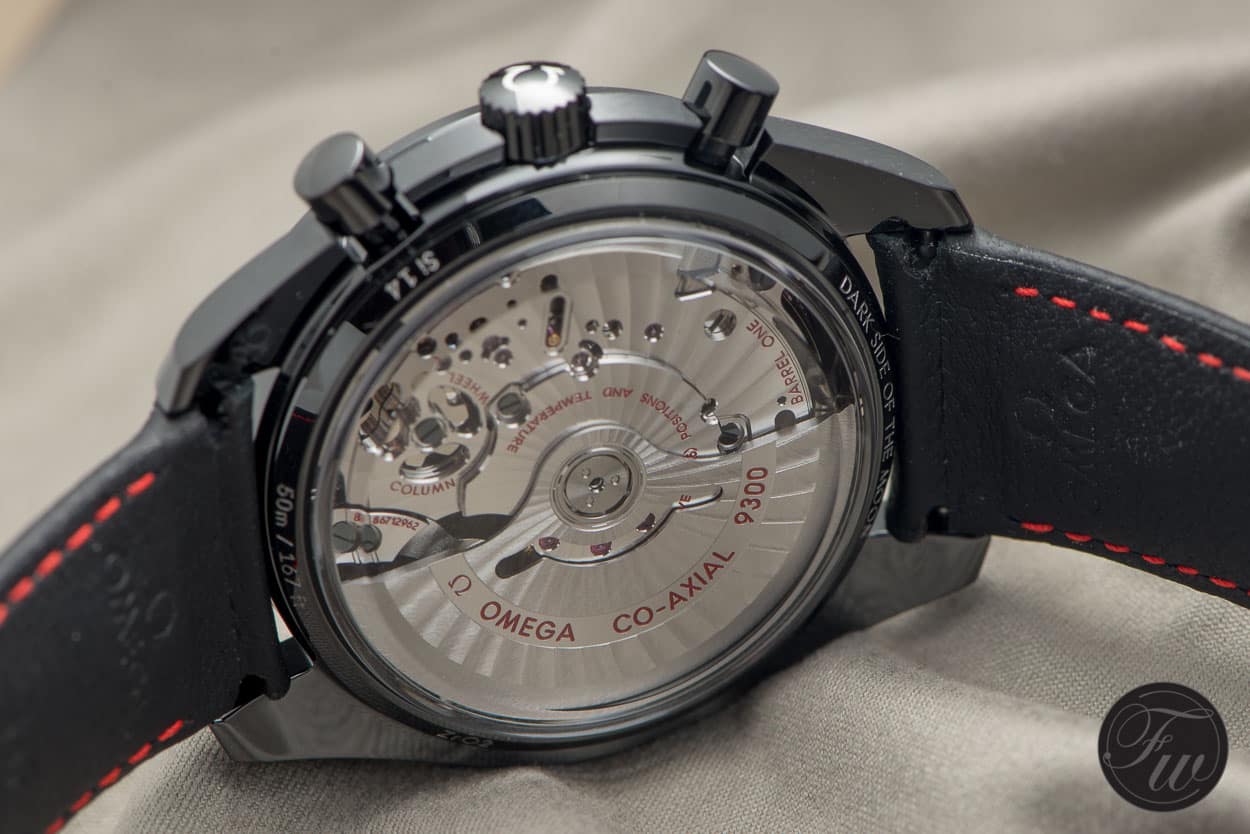 At first glance, you might think it is the regular Dark Side of the Moon model. However, it is not. The Pitch Black model lacks a bit of (red) color and has been excessively applied with Super LumiNova, including the writing on the dial and tachymeter scale on the bezel. A very readable watch for sure, but it does lack a bit of contrast in my opinion, compared to the original Speedmaster Dark Side of the Moon. The more choice people have, the better when it comes to selling watches I guess, but I wonder whether this Pitch Black model really makes a difference compared to the 2013 Dark Side of the Moon. Perhaps if the 2013 model would be taken out of production, this Pitch Black model could be seen as its successor. The list price of the ceramic Speedmaster Pitch Black reference is also € 10,600 Euro. The Pitch Black comes on a calf leather strap with ecru stitching and a folding clasp. 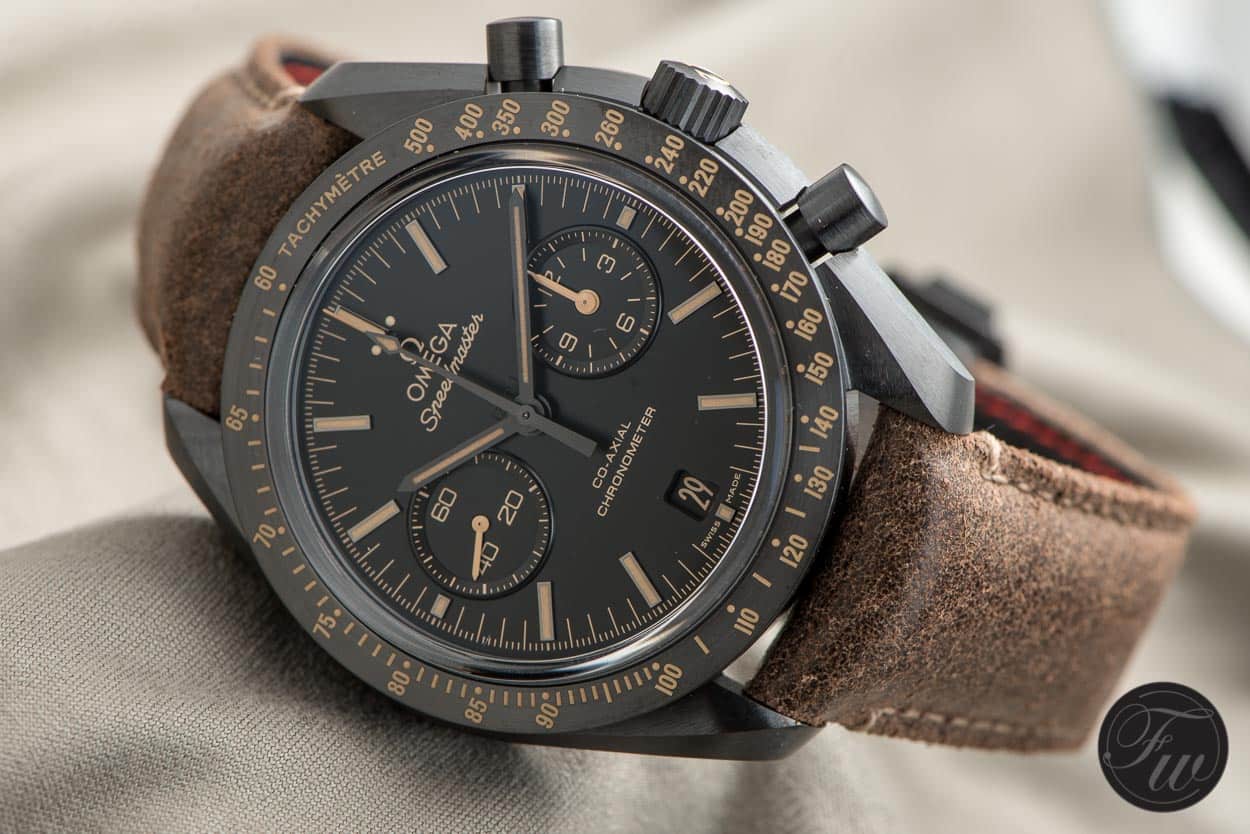 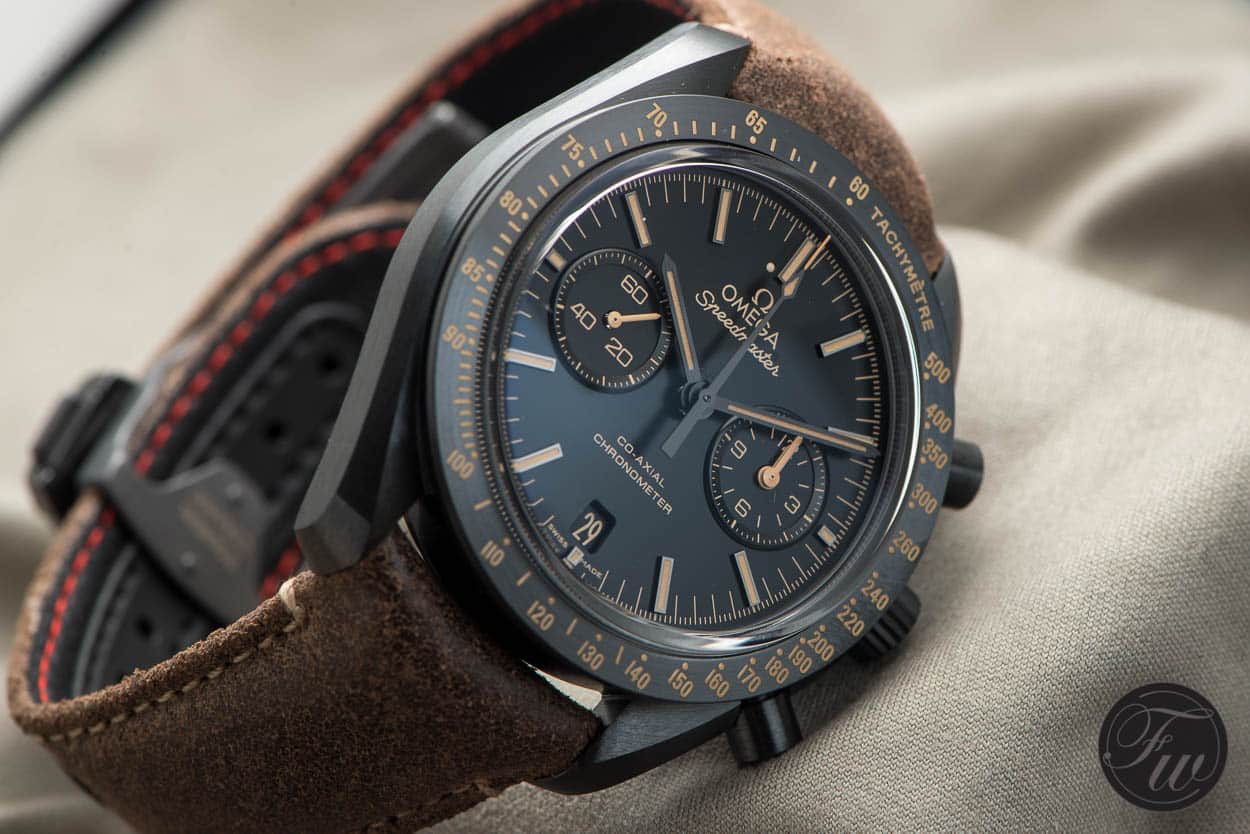 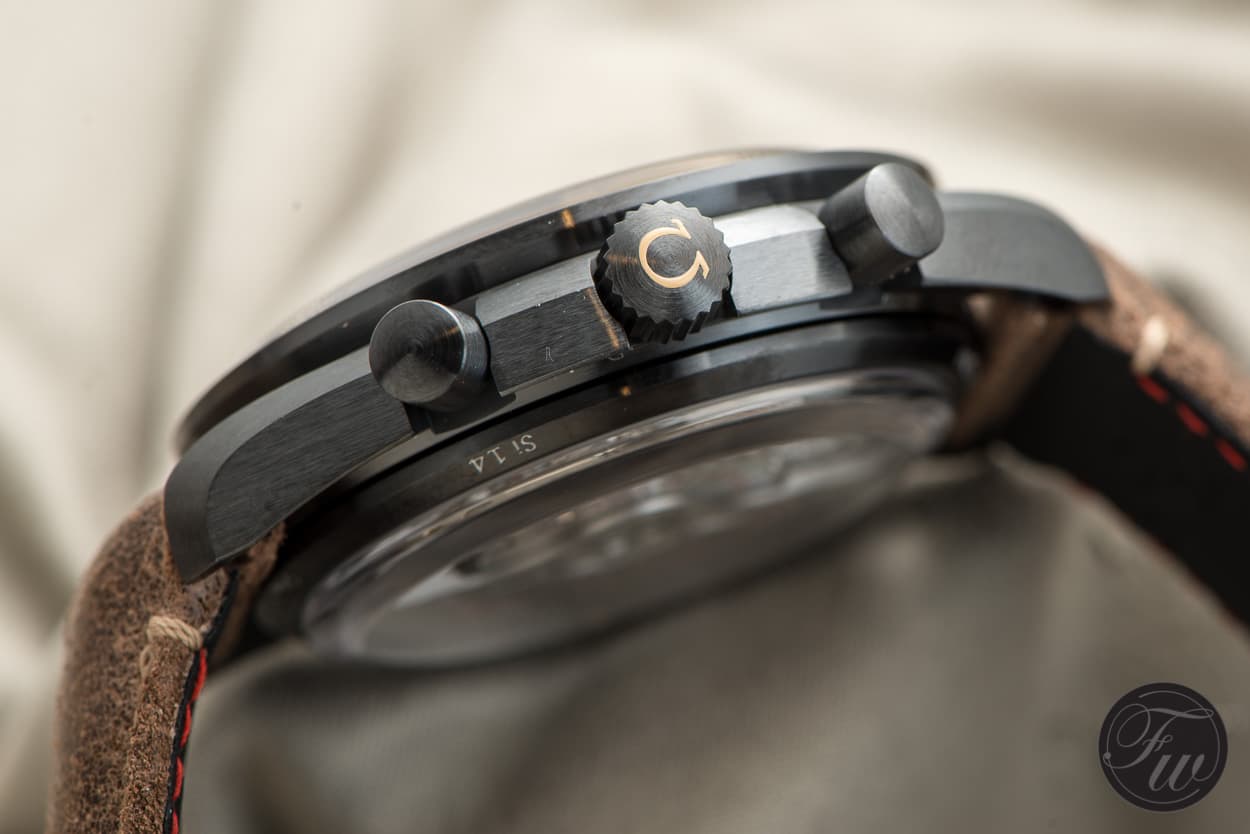 The ceramic Speedmaster Vintage Black was the one that received a lot of “oohs” and “aahs” when it was shown to us and others at the different events mentioned earlier. The faux patina on the blackened hands, dial, bezel, date disc and even crown might sound like a bit “too much”, but in the flesh it is a handsome watch and it didn’t bother me personally. I love Omega’s choice for the strap, a bit of a rough structured vintage leather that perfectly suits the watch and makes me want it in 20mm for my Speedmaster Professional. In the end, even with the vintage aesthetics, I guess Omega targets those who love to have a modern (ceramic) watch with in-house chronograph movement, date feature, sapphire crystal and so on, but with a vintage appearance. I am pretty convinced that vintage people will either go for an actual vintage Speedmaster or a super modern variant like one of the other models in this overview. I like the Vintage Black a lot, don’t get me wrong, but in the end it would not be my pick. This ceramic Speedmaster Vintage Black watch also has a € 10,600 Euro list price. 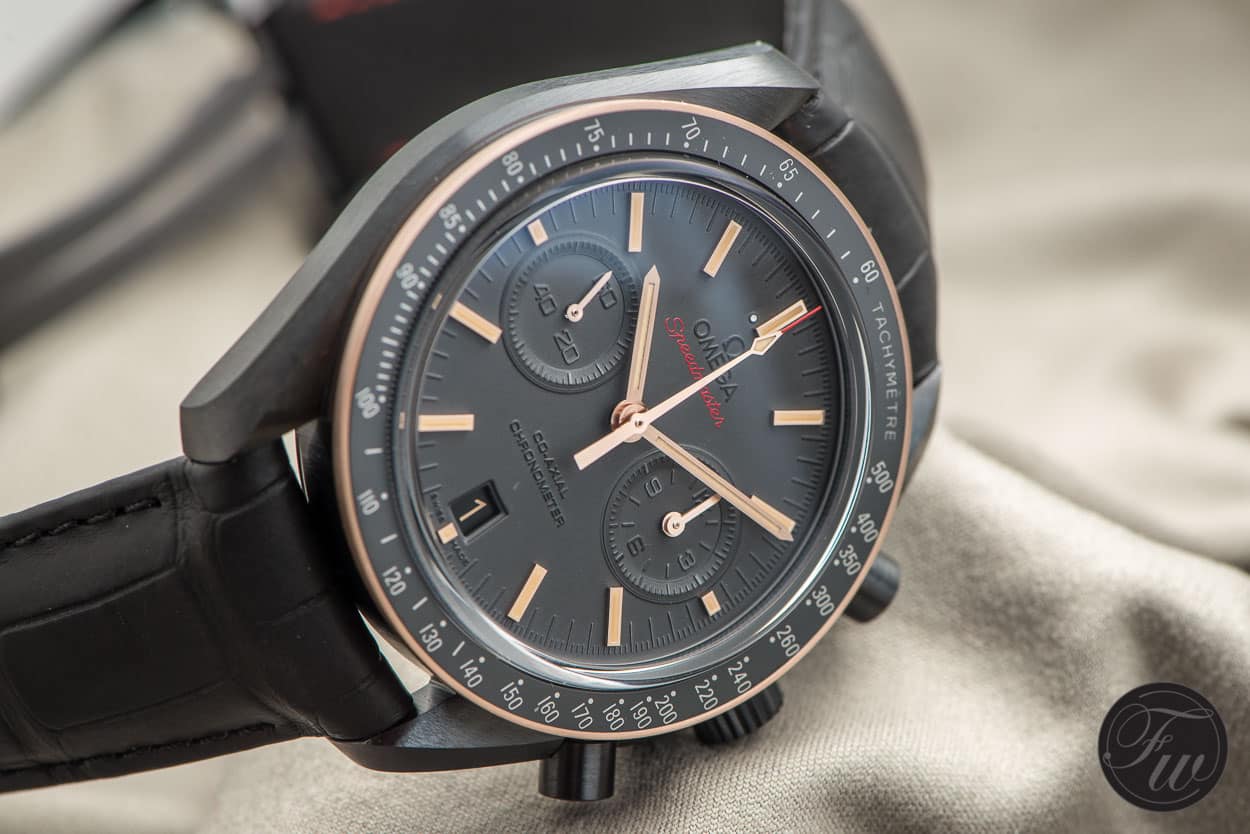 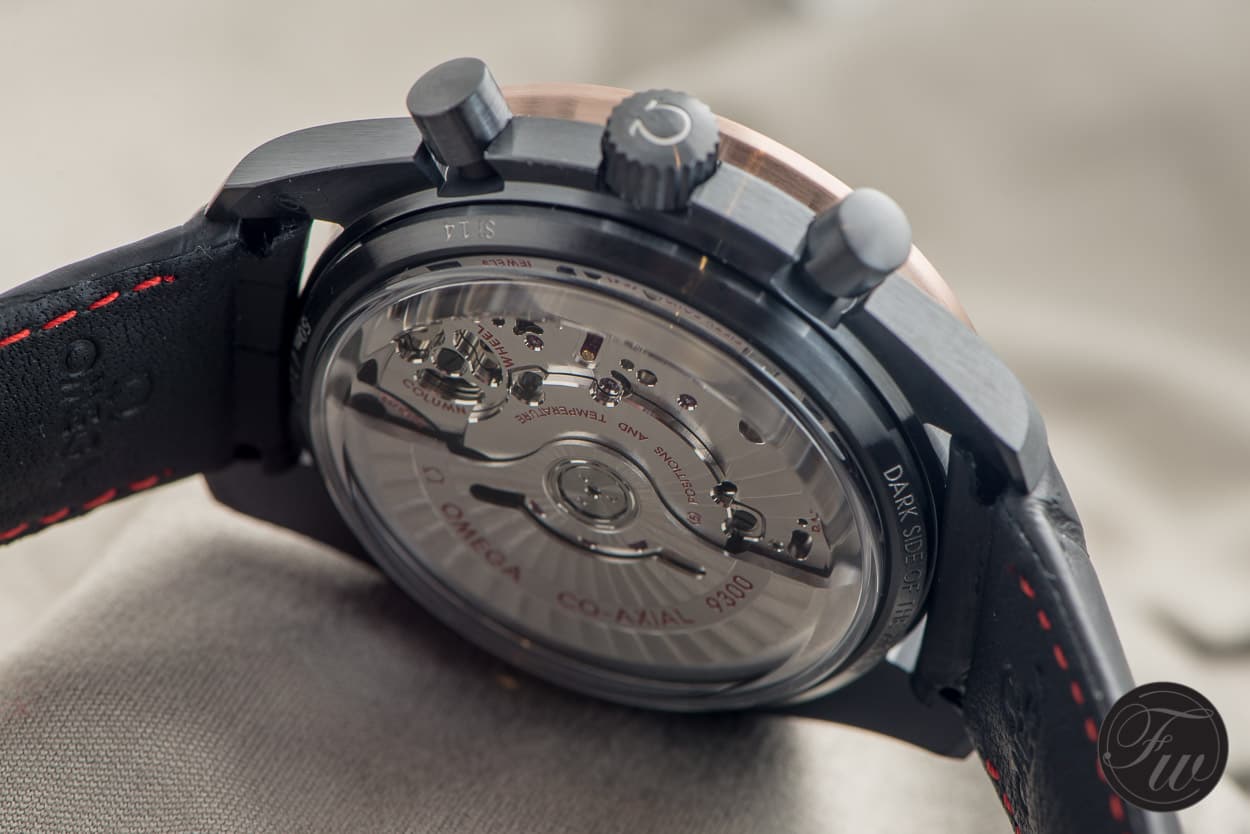 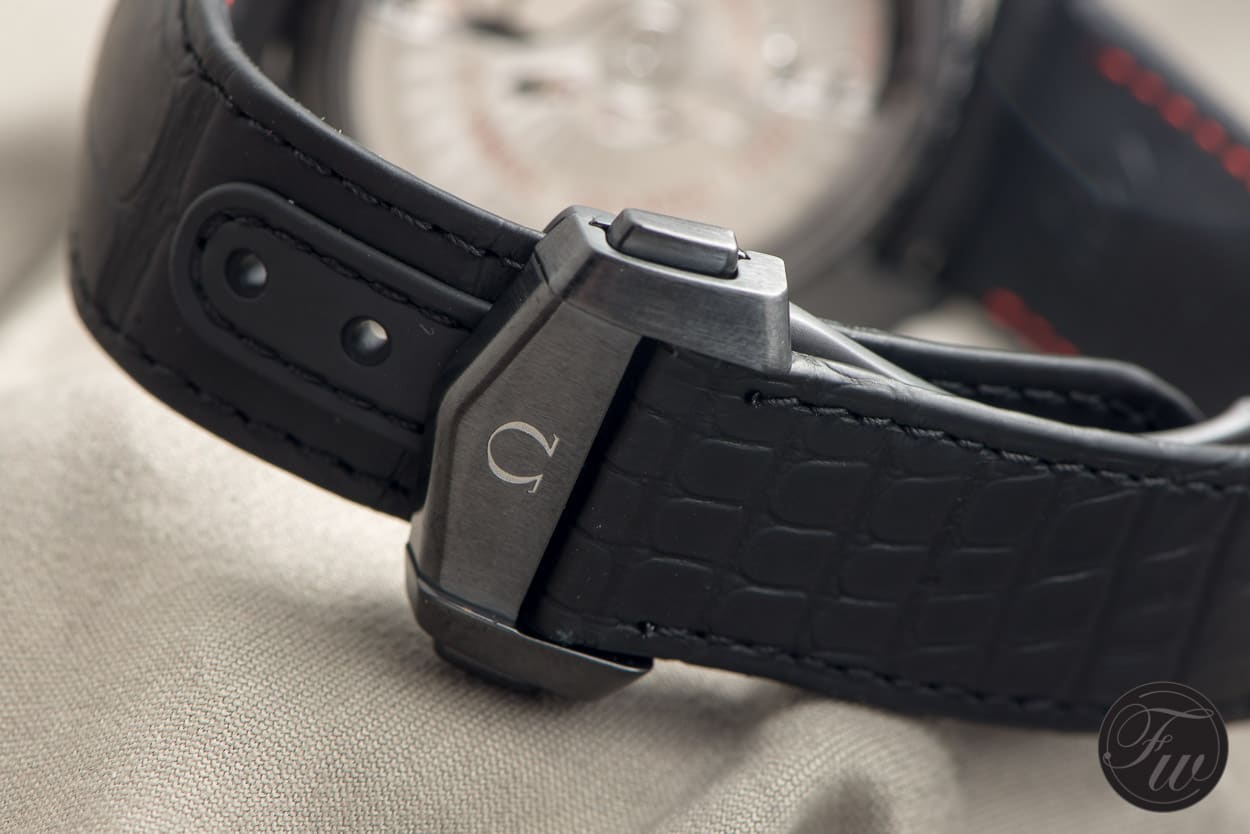 I will tell you the truth right away: This would be my pick. Although at first glance (on the press release Omega sent us under embargo), I wondered whether this Sedna Black version would be my least favorite model as I couldn’t match the use of gold on such a ‘stealth’ timepiece. However, upon seeing it in the flesh, I immediately decided it is my favorite Dark Side of the Moon version of the new 2015 releases. The bezel Sedna gold bezel reminds me of the Speedmaster Professional Apollo XI 45th Anniversary model that Omega showed us last year. A watch that I really love from the traditional ‘Moonwatch’, despite being totally different from everything else in that collection. The ceramic Speedmaster Sedna Black also used 18 carat Sedna gold hands, hour markers and even the print on the date disc is in a gold color. The matt grey dial has been treated with their laser ablation technique, resulting in the nice effect of the markers and Speedmaster logo and writing. The Sedna Black also uses the faux patina for everything Super LumiNova. The ceramic Speedmaster Sedna Black is the most expensive one of these 4 new Dark Side of the Moon models, with a list price of € 12,300 Euro. This watch is delivered on an alligator strap and brushed ceramic folding clasp. 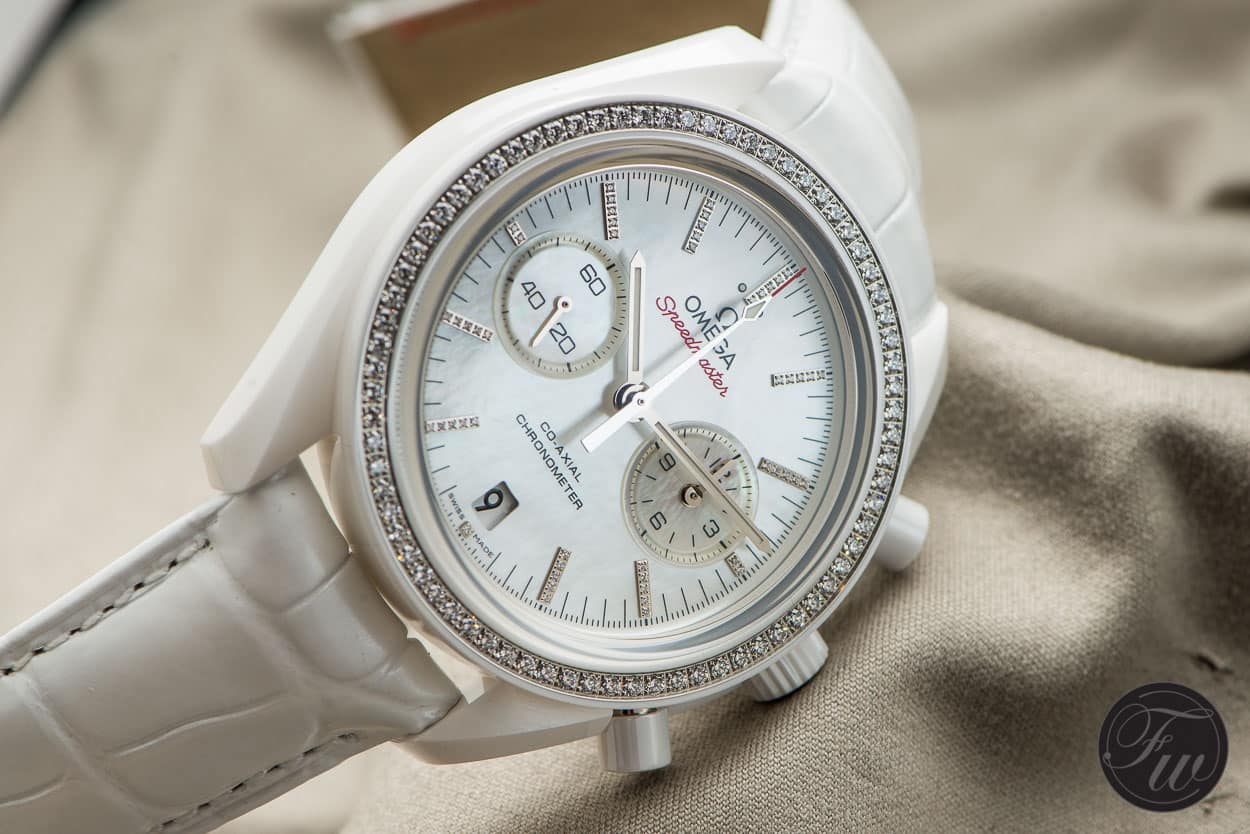 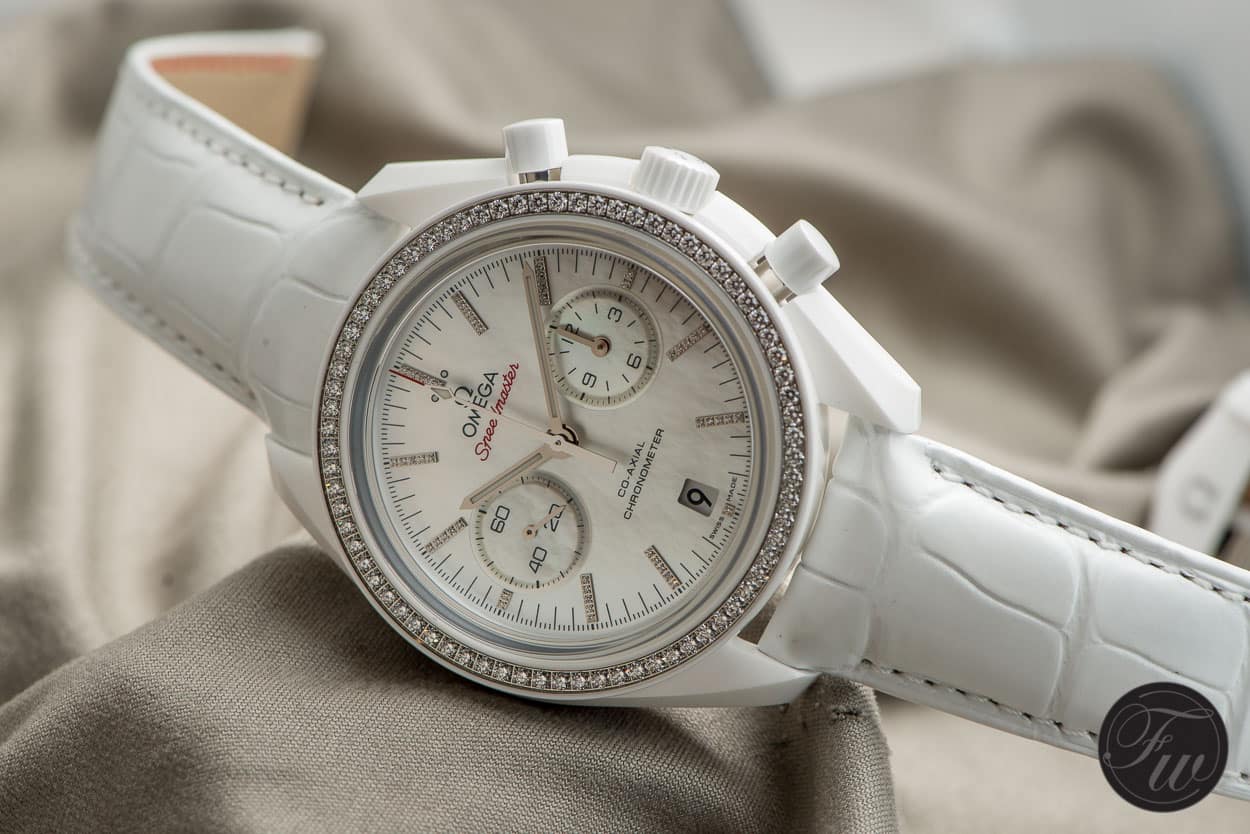 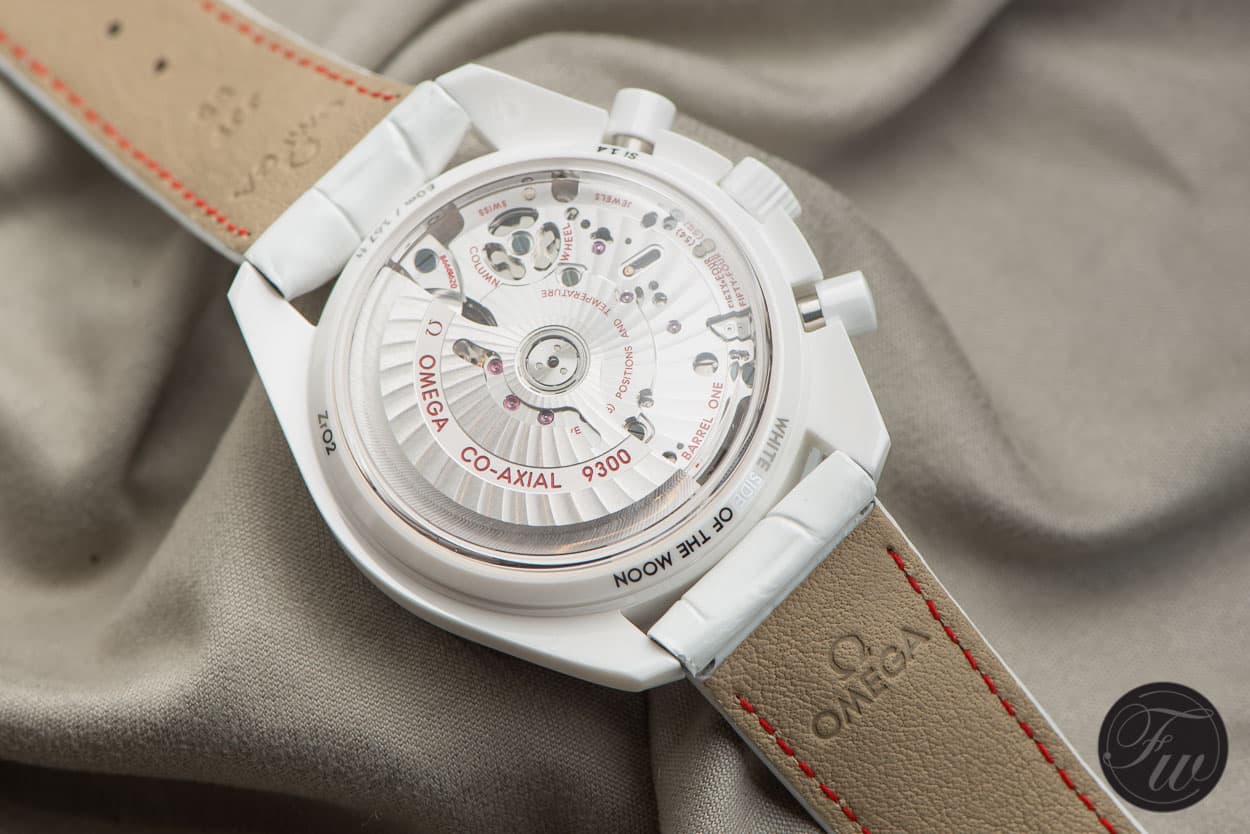 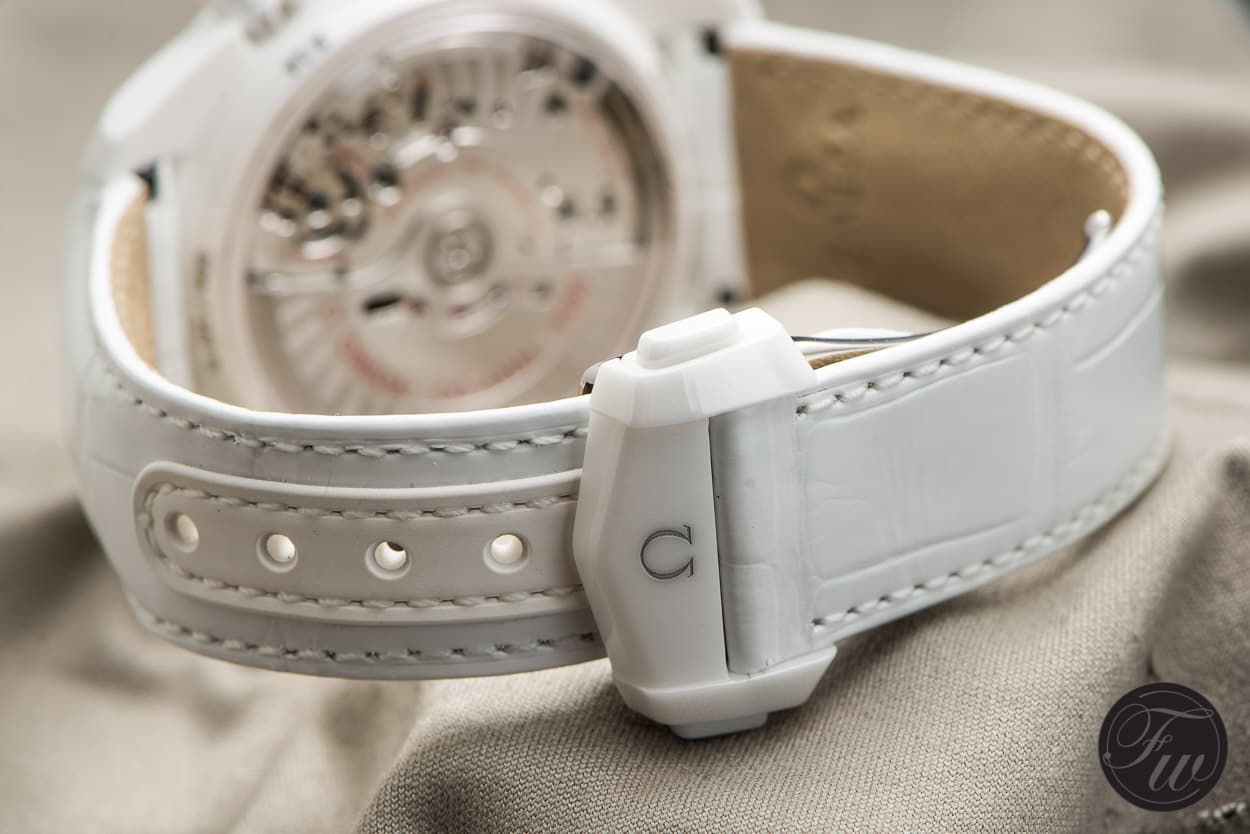 I am showing you here the diamond studded version, which is actually White Side of the Moon reference 311.98.44.51.55.001 (list price € 21,200 Euro instead of the € 10,600 Euro for the ceramic bezel version). In both cases though, I thought this watch would be meant as a women’s watch at first. Not a bad thing for women (although my wife thought they are looking a bit plastic when she saw one in the flesh) but these White Side of the Moon versions are of course also 44.25mm in diameter. That is quite large. I rarely see women wearing watches over 40mm (perhaps 42mm at max) to be honest and most of these are actually men’s watches worn by women. This watch confused me, as I don’t see these watches as being very masculine. On the other hand, it perhaps a matter of offering choices. There might be men, perhaps in Sunnier locations than in The Netherlands, Germany or the United Kingdom, who are going to wear this despite the all-white color (let alone diamonds and Mother-of-Pearl dial).

The White Side of the Moon with Mother-of-Pearl dial and diamond bezel leads me to the next model we’ve seen. 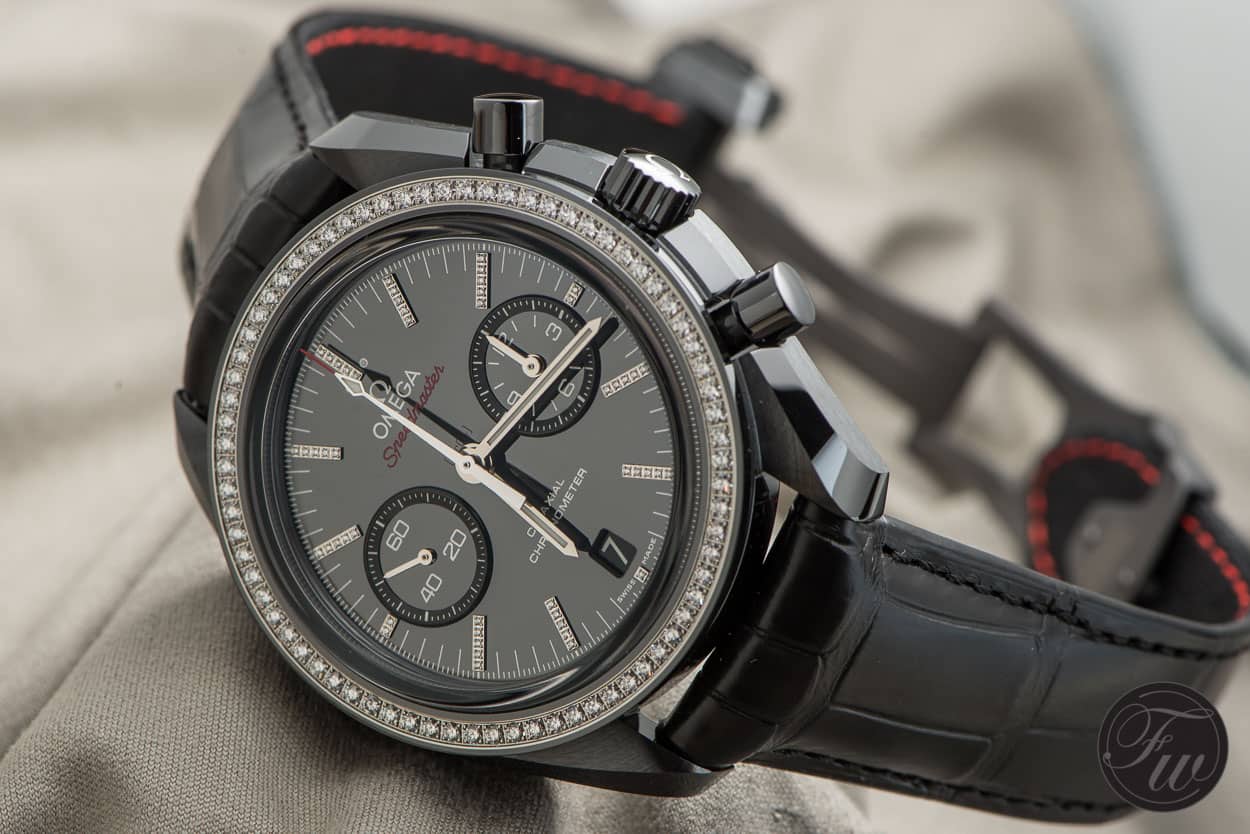 What’s The Verdict On The Ceramic Speedmaster Models

My colleague Michael Stockton expressed his worries about the new ceramic models in this article, on the day before they were actually shown to the public in BaselWorld. His concerns were mainly about the popularity of black watches (ceramics, DLC, PVD etc) in the long run, the diameter size (also in the long run), the price points (all in the > €10K arena) and whether the uniqueness and resale value of the original Dark Side of the Moon would be affected.

Valid questions in my opinion, and I am not able to answer those regarding the size and use of ceramics. The price point is indeed higher than what people tend (or used) to expect from Omega, but the sales of the original Dark Side of the Moon – also retailing around €10K Euro – are more than impressive. The use of the in-house caliber 9300 chronograph movement and ceramics are of course elements that have an impact on the price and perhaps also justify this price level. The uniqueness of the Dark Side of the Moon has been affected in my opinion, but not in a negative way per se. If I were in the market for one of these pieces, I would have a hard time choosing between the DSotM, GSotM and the Sedna Black. Although the Sedna Black comes at a higher price.

Would it be wise to go after a DSotM with these new models coming in October/November 2015? There are no signs of discontinuation of the DSotM and I hope that Omega will not stop production any time soon on these models. They need a new classic or ‘back bone’ in their ceramic Speedmaster collection, let the 2013 DSotM be that watch. It might be worth the wait until the new ceramic Speedmaster models hit the market though, as they might affect the resale value of the DSotM. Those who want to save a few bucks might be able to pick-up a slightly used version for an attractive price. Today, there is little difference between a slightly pre-owned model and the market value of a new DSotM.

The ceramic Speedmaster models are here to stay in my opinion, as Omega clearly didn’t want to do all these investments in producing ceramic watches in just one DSotM and GSotM model. I expect more use of ceramics in the years to come. In that respect, it might be wise to buy an original 2013 DSotM as it might become highly collectable in the future as being the first of many. Being more or less a (vintage) Speedmaster ‘Moonwatch’ guy myself, I have to admit that the Speedmaster Dark Side of the Moon is very difficult to take off the wrist. It is a perfect every day watch to wear, despite the 44.25mm size (or black ceramic case). The only wish I have for the ceramic Speedmaster watches (and caliber 9300 Speedmasters in general) is that Omega stops calling them ‘Moonwatch’ in their official catalogs and on their website. The influence of the Moonwatch is clearly there, but it is not a Moonwatch as such.

Hot Topics
Introducing: The Omega Speedmaster Super Racing With Spirate System
165 comments
Design Vs. Specs — Which Is More Important To You When Buying A Watch?
87 comments
New Release: The Limited-Edition Seiko Prospex SLA067J1 Diver
64 comments
My Predictions For New Omega Speedmasters In 2023
60 comments
The Best Independent/Microbrand Alternatives To The Rolex Explorer In 2023
53 comments
Popular
Top 10 Rolex Watches – Overview of Models Favoured By Our Readers
Fratello
25
Two Patek Philippe Nautilus Watches: 3700/1A Versus 5711/1A
Robert-Jan Broer
16
You Asked Us: Rolex Submariner vs Omega Seamaster
Robert-Jan Broer
25