Every time I strap this watch on, I feel there’s room for more chronographs with big lume dots in this world. Four straight days with the Yema Valjoux 92 chronograph proved how comfortable and versatile a gold-plated chronograph could be.

There is so much to talk about today. I haven’t featured this decent chronograph sooner because I hoped to get my hands on Yema’s history book first. It was supposed to be released in English maybe a year ago, but Yema decided not to publish it after all. I didn’t investigate the reasons much, and I haven’t managed to get ahold of the French original. I will ask the brand to send me a copy, though, as I hope to learn more about this Yema Valjoux 92 chronograph. Because honestly, I don’t know much about it… 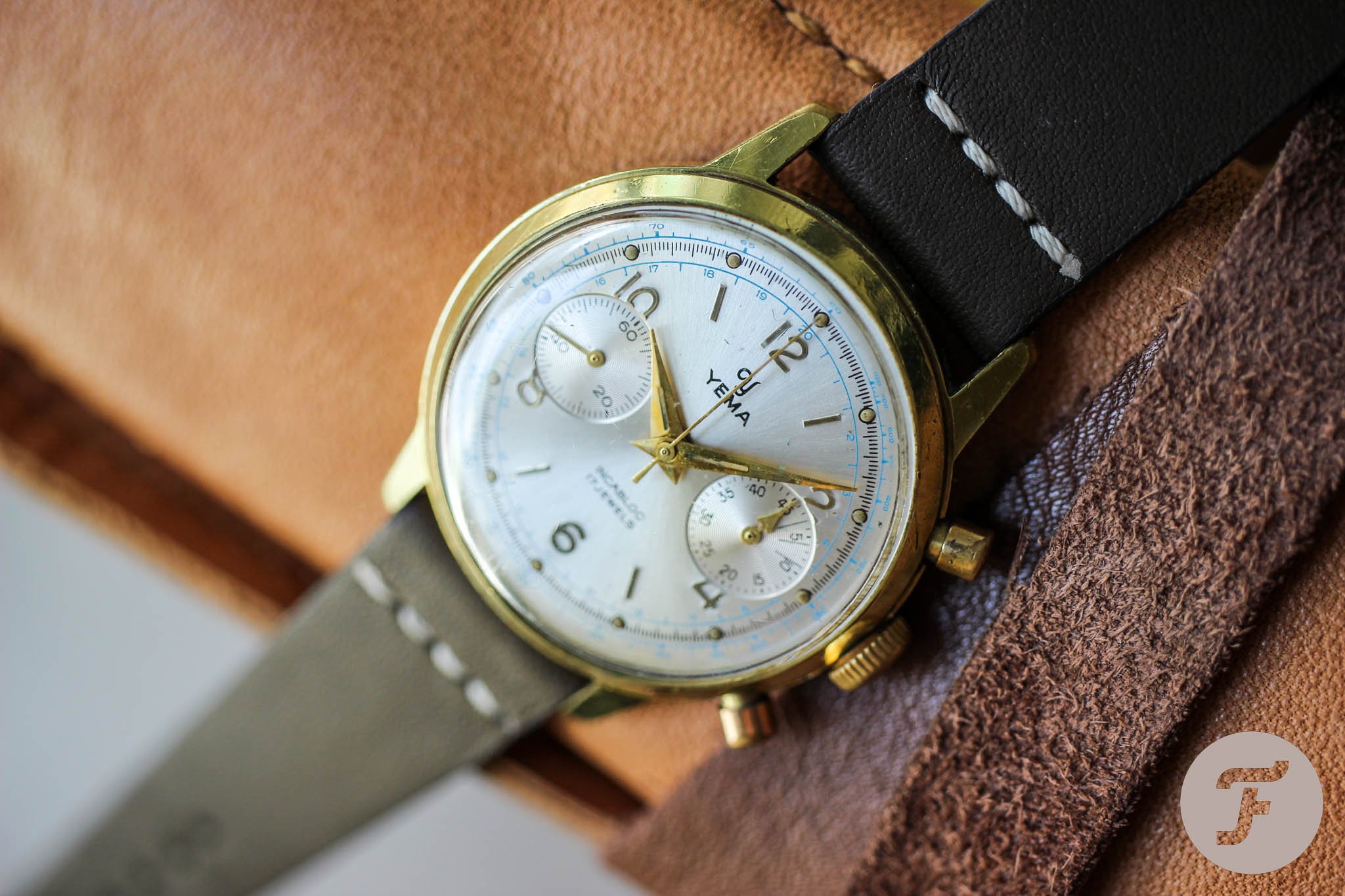 From what I remember, I bought it maybe three years ago on eBay from a young German guy. He had gotten the watch from his father, who owned it for quite a few years. There was a detailed story, but sadly, I did not archive it properly. I always ask the seller about the watch’s origin, and I always take screenshots to save them in my digital archive. It seems I forgot to copy these messages from eBay, and as you know (or don’t), eBay deletes the contents of your inbox after some time. As a result, all names and personal stories are irreversibly lost. Lesson learned: never forget to document and archive all you can put together about your new old watch. And do it immediately after the purchase. 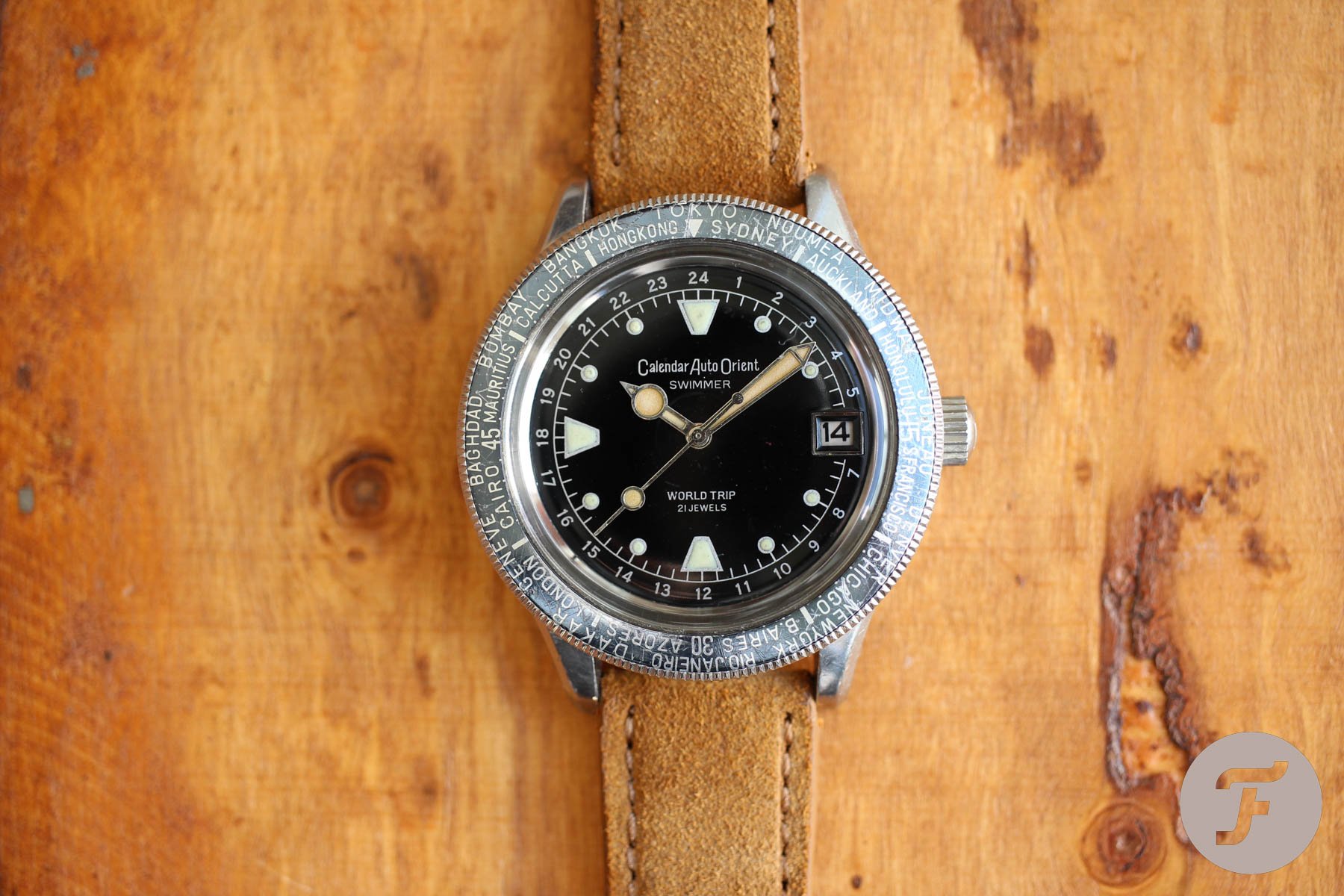 Now that I have successfully drowned my sorrow in a bohemian glass full of the fine vermouth that my wife keeps on hand for me, I am ready to move on with writing. Maybe I can’t tell you the precise release date or watch reference, but I can surely tell you why I bought it. I have a thing for lume dots, and not necessarily just the ones on the GMT-Master. There are many other stunning specimens out there. Take the Calendar Auto Orient Swimmer as a shining example. 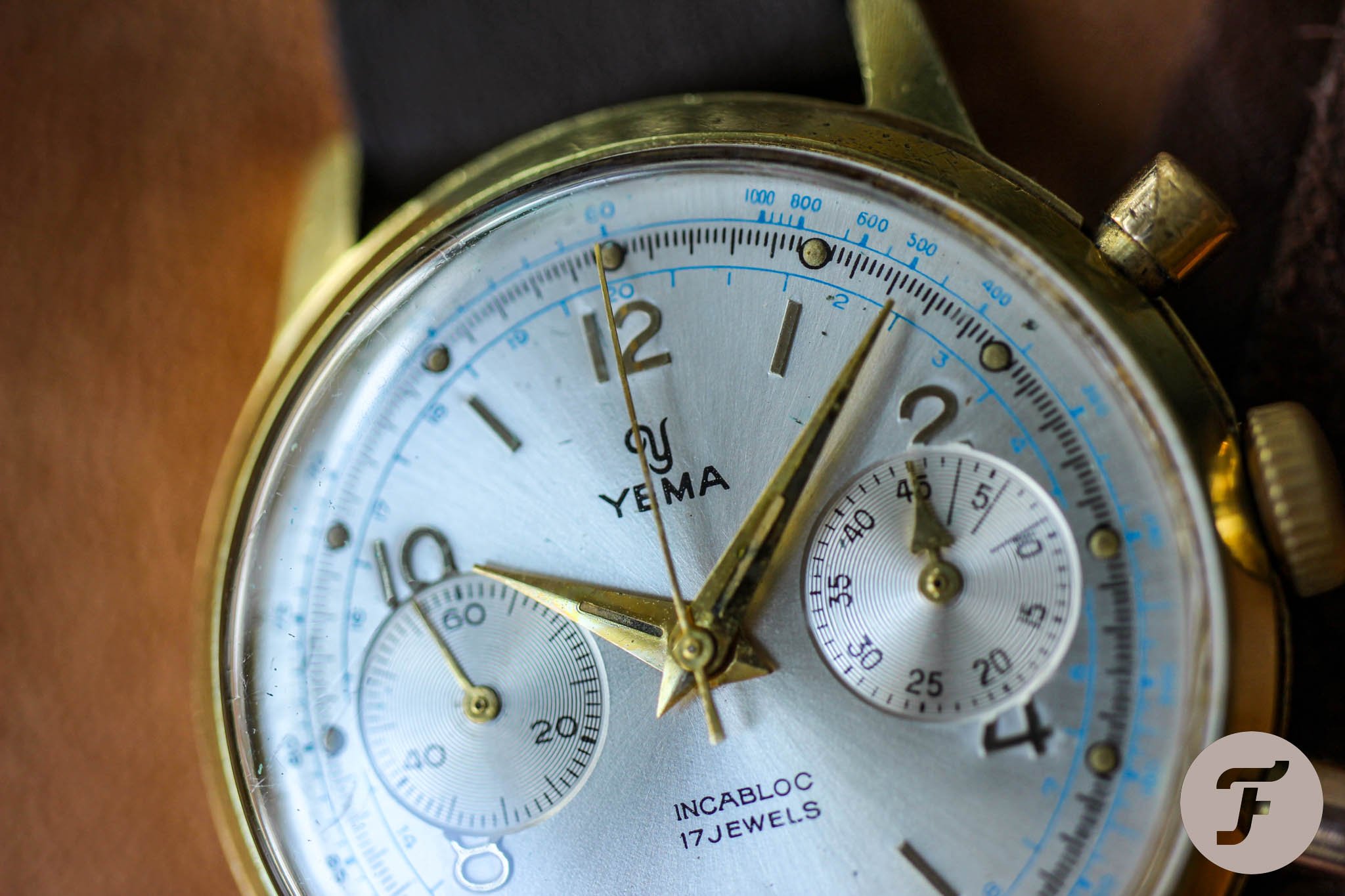 Well, lume dots aren’t any big news, and you can find them on dials quite often. Or, more precisely, you can’t find them, even though they are there. Lume dots on chronographs are often so tiny that you can barely see them. In the worse case, they already fell off a few decades ago. They are often placed on the edge of the dial, and design-wise, they play a negligible or non-existent role in the overall visual experience. Well, that is not the case today.

The lume dots on the Yema Valjoux 92 chronograph’s dial are maybe triple the size of what you usually get. They do not sit near the hour indexes. Rather, I believe they are the hour indexes, and the “real indexes” look like they play a supporting role here. The lume dots are big, fat, and round, and they have developed a charismatic patina. Each one sits atop a little black background which gives them a ring-like frame. The lume application is just overwhelmingly precise and consistent. An important part of the design is the composition of the track. The black minute track with lume dots is placed between two blue supporting scales that provide a lot of space. The dial breathes nicely. It’s almost hard to believe that the watch only measures 36mm in diameter. 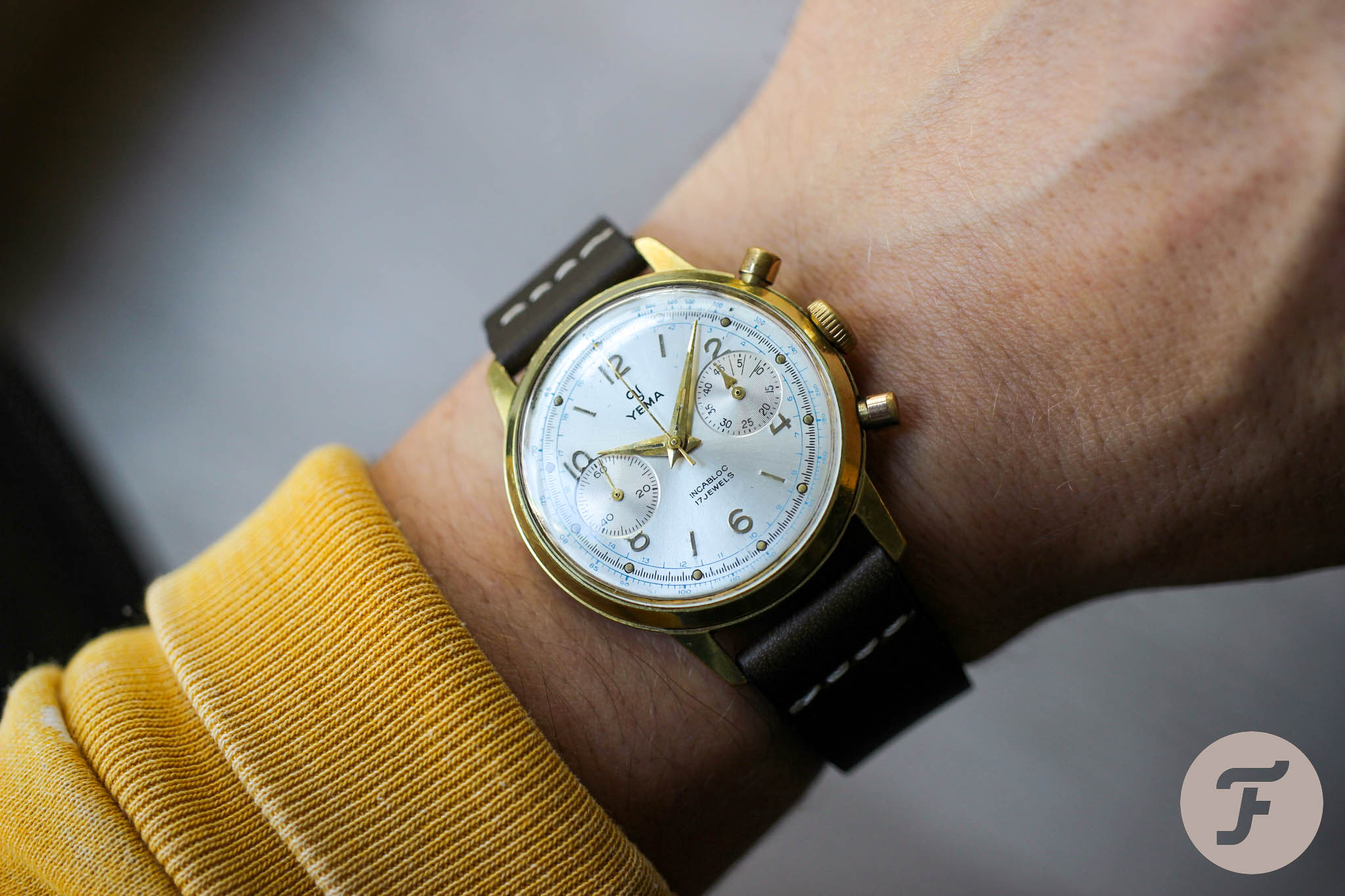 I already mentioned the two light blue scales around the edge of the dial. They perfectly contrast the warm golden tones on the black-accented and shiny radial sunburst dial. Often, there is just too much gold on a gold watch. Here, though, I wouldn’t even call it a gold watch. Gold is just one of the “ingredients” used, and all of them are perfectly balanced. 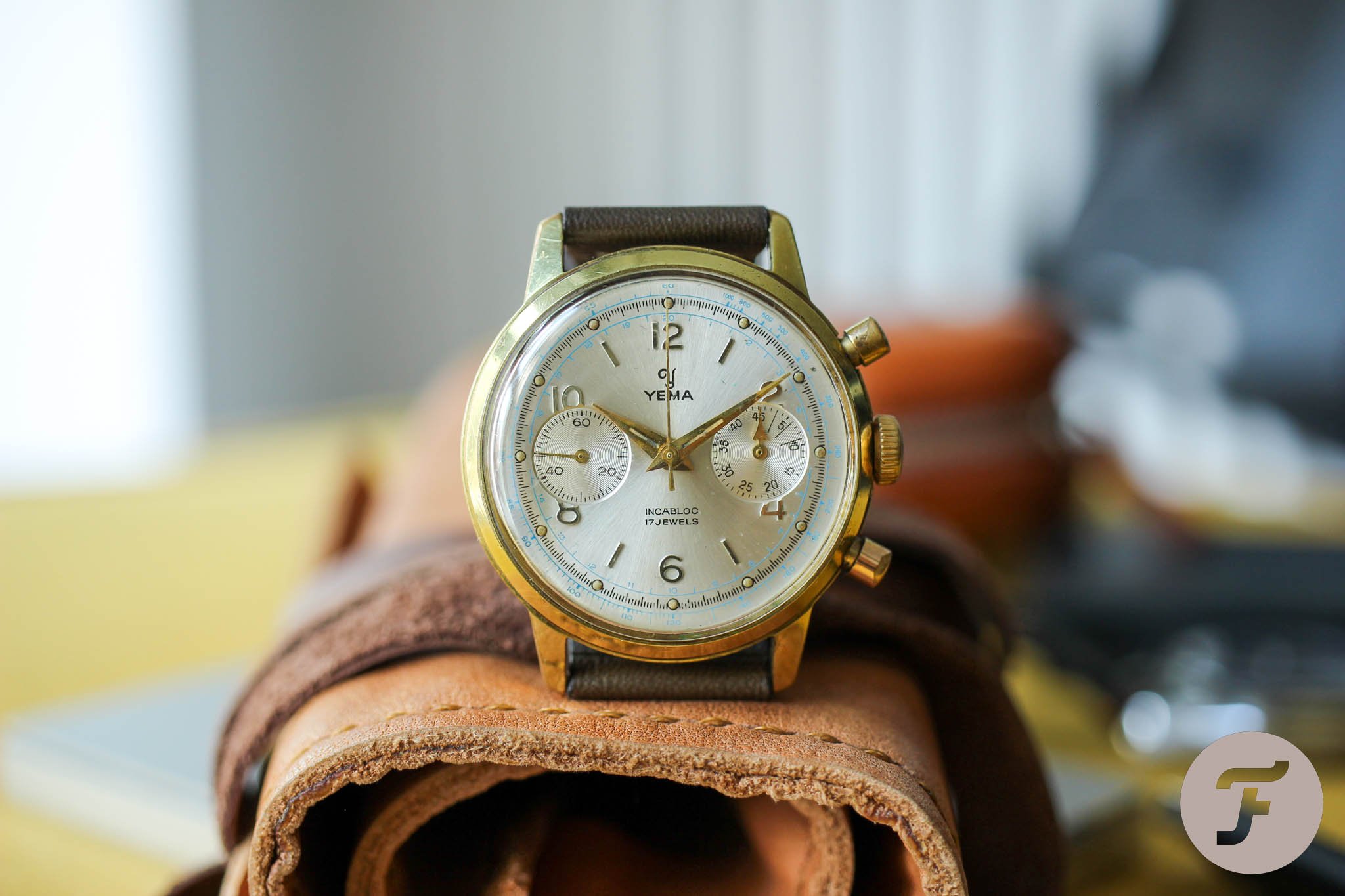 The blue and yellow tones work perfectly together. The silver dial also gives the watch a bit of a cool feeling. I can’t help but notice that the case gives off a somewhat greenish reflection. I don’t know if this is due to the blue tones or just the fact that it’s a generic gold-plated case with some spots of plating already gone. That’s why I fitted it with a dark green strap from Localtime. Interestingly, there is a listing on Chrono24 at the moment, and the seller also opted for a green strap. It kind of asks for it, doesn’t it?

There are two listings of the same watch on Chrono24 — one for €900 and another one for €1,100. It’s maybe a bit over what I would pay for it because you can get a decent full-steel Yema “Daytona” for somewhere around €1,300–1,700. And I do not mention the Yema Daytona just for kicks. If you look at both watches, you will find many similarities. They include one of my favorite details — an elapsed-minute register marked in five-minute intervals with a short and thick arrow hand gliding over it. 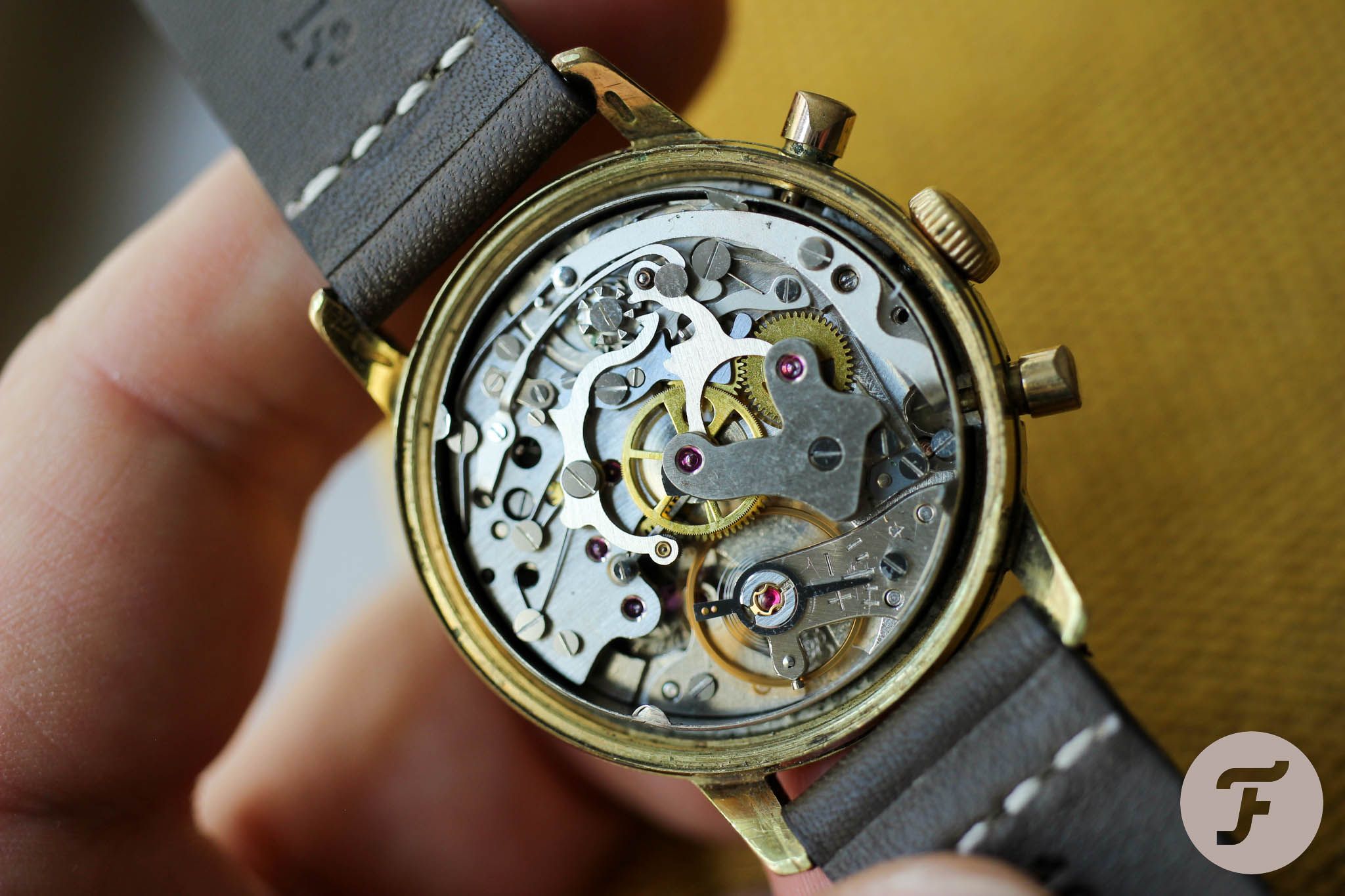 When Venus ceased production in the mid-1960s, its rival Valjoux swallowed the company’s assets. Valjoux then discontinued the production of Venus column-wheel calibers and put an emphasis on the cam-switched Valjoux 7730 (Venus 188) series. That’s why you will find most Yema Daytona watches out there fitted with the Valjoux 7730. There are also Valjoux 92-powered Yema Daytona models, but they pop up less often. Well, if you prefer the column-wheel-equipped Valjoux 92, you can also find it in this gold-plated chronograph. It’s reliable and incredibly satisfying to operate.

There is also a model with only Arabic numerals for hour indexes rather than the mix we see here. A few times, I even spotted a black-dialed version, which is nice, but it looks like a completely different watch to me. When it comes to this bright-dialed model, you don’t want to cut your high standards on dial quality. Any blemish or stain is highly visible and looks pretty ugly on the dial. 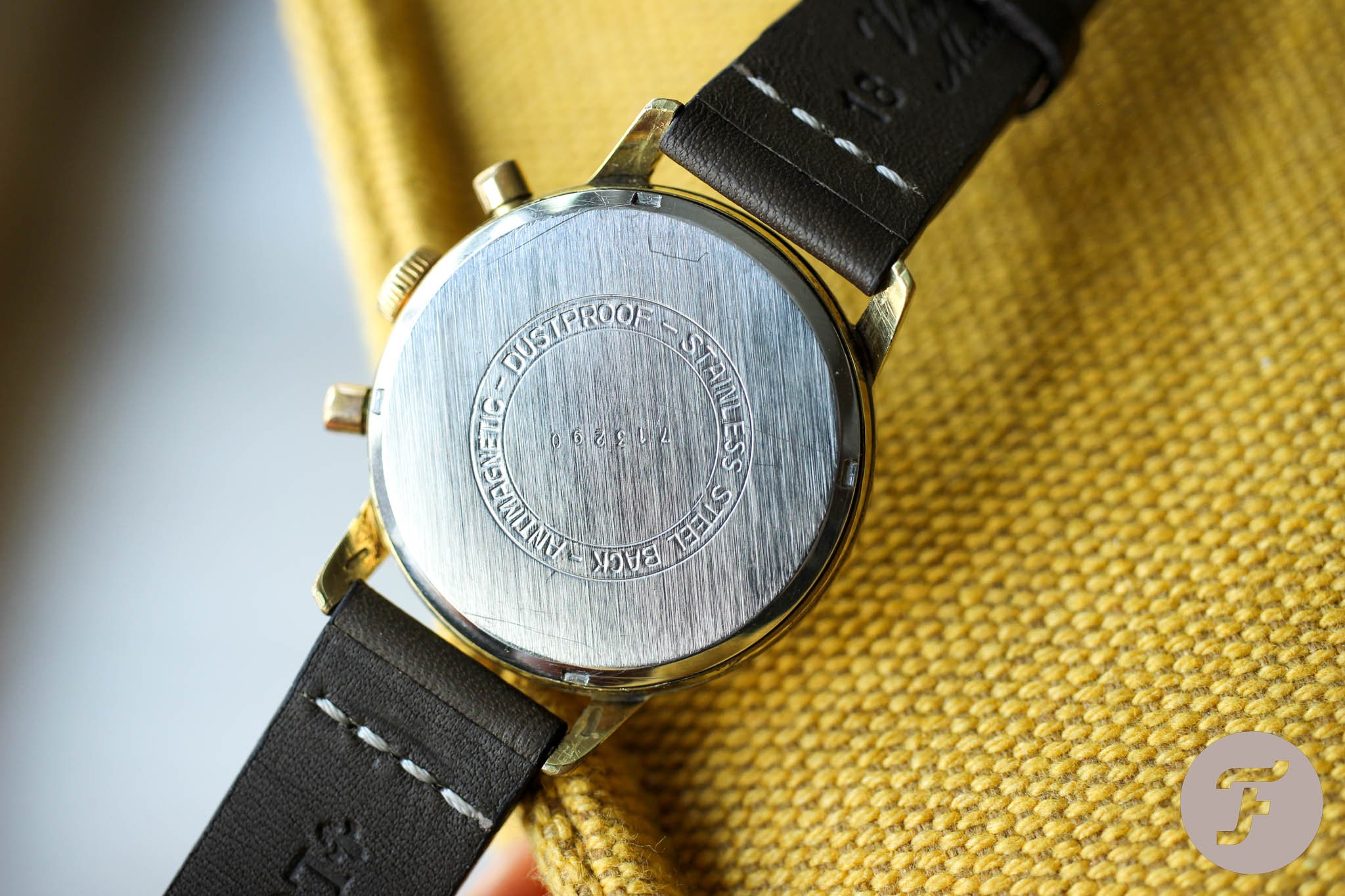 If you don’t have the budget for a bigger Yema Daytona in steel, this dressier and slightly smaller brother will do the job. There is a huge chance that the Yema Daytona you find will be over-polished as well. It happens often, and it doesn’t look good. If you’re in the mood for shiny gold, check out German auction sites. I believe you can score one of these for about half of the price you see on Chrono24, making it just about 20–30% of the Yema Daytona price. Happy hunting!