Today, #TBT ventures back into familiar territory by, once again, taking a look at a mechanical chronograph. This time, however, we’ll talk about a watch from a brand that I really hadn’t heard of up until roughly a year ago. I recommended the brand Yema, and its U.S. distribution name “Le Jour”, as a brand to watch in my Vintage Market Update from a couple months back because the watches combine some great style at a still-affordable price in the increasingly unaffordable vintage chronograph market. Let’s take a closer look at one of the brand’s more popular pieces to see what it has to offer and also use this week to talk a little about finishing on vintage watches; the Yema Daytona is now on #TBT. 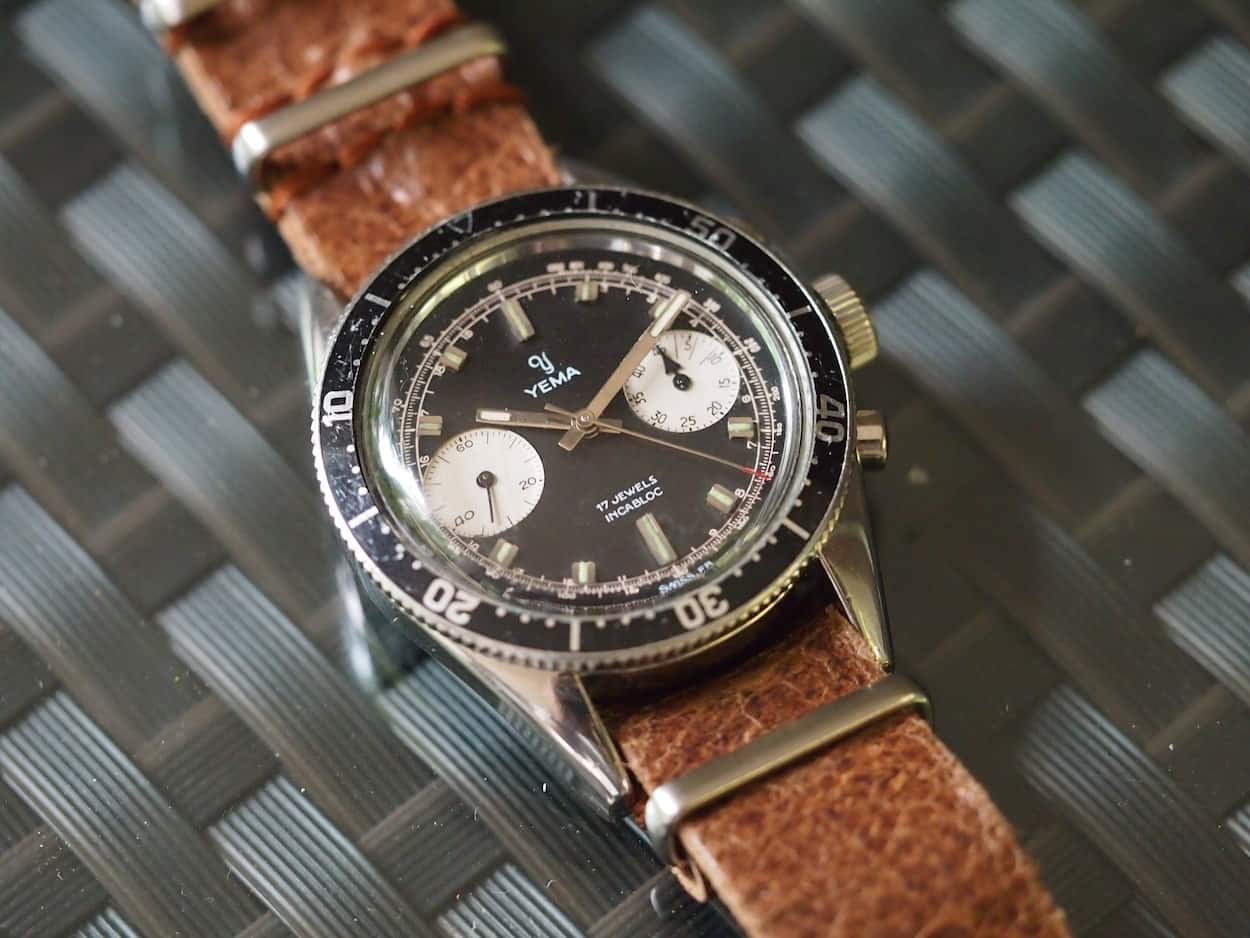 The Yema Daytona…what’s in a name?

Guffaw and chortle away at the name of this piece, but the watch world is a goofy one when it comes to titles: especially the vintage watch world. Yes, this Yema is called the “Daytona” by fans for no other reason than, well, it’s a chronograph? Honestly, I don’t get it because the watch looks a lot more “Autavia” than “Daytona” to me, but somewhere, probably in France (which will make better sense later), someone decided to use the same moniker as a certain 3-register chronograph from Switzerland. Anyhow, I found out the name of this piece when posting it on my Instagram account and people hurriedly chimed in to let me know its calling card; there’s always something to learn in the world of vintage watches. With all that said, let’s learn a little bit about the brand and then we’ll investigate the curiously named Yema Daytona. 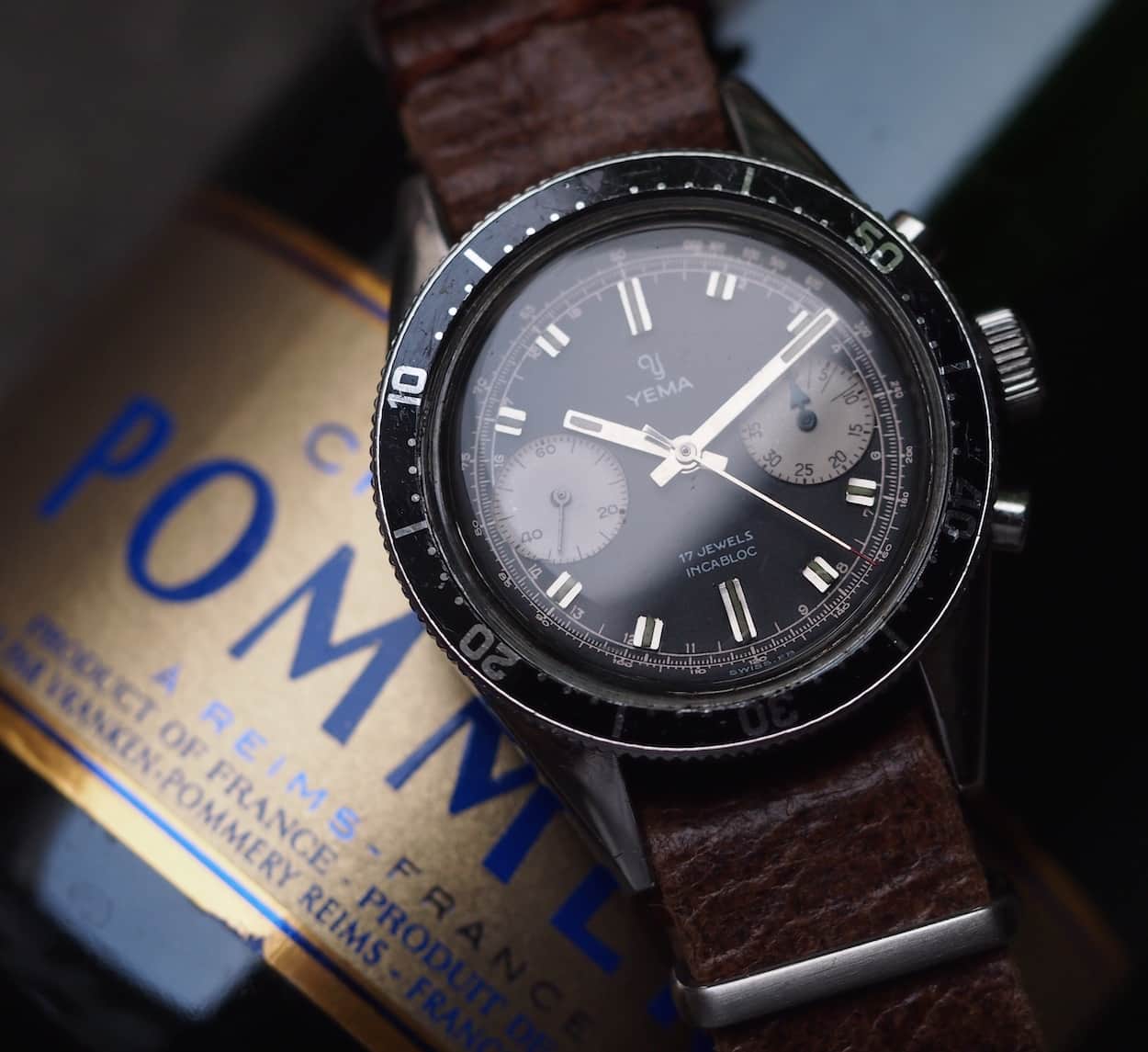 The Yema Daytona posing next to another beloved French product

Yema was founded in Besancon, France in 1948 and was quite a popular independent watchmaker. They actually produced watches in France and seemingly utilized production capacity in nearby Switzerland. Per Wikipedia, Yema was the first French company to produce a completely French-made automatic chronometer. The company was famous for its interesting chronographs, especially its yachting pieces. These are highly desirable, especially in France, and some great information about them can be found here. An interesting turn occurred in 1988 when Seiko bought the brand. In 2005, though, the brand was purchased by local French owners and is now selling fashion watches. Alas… 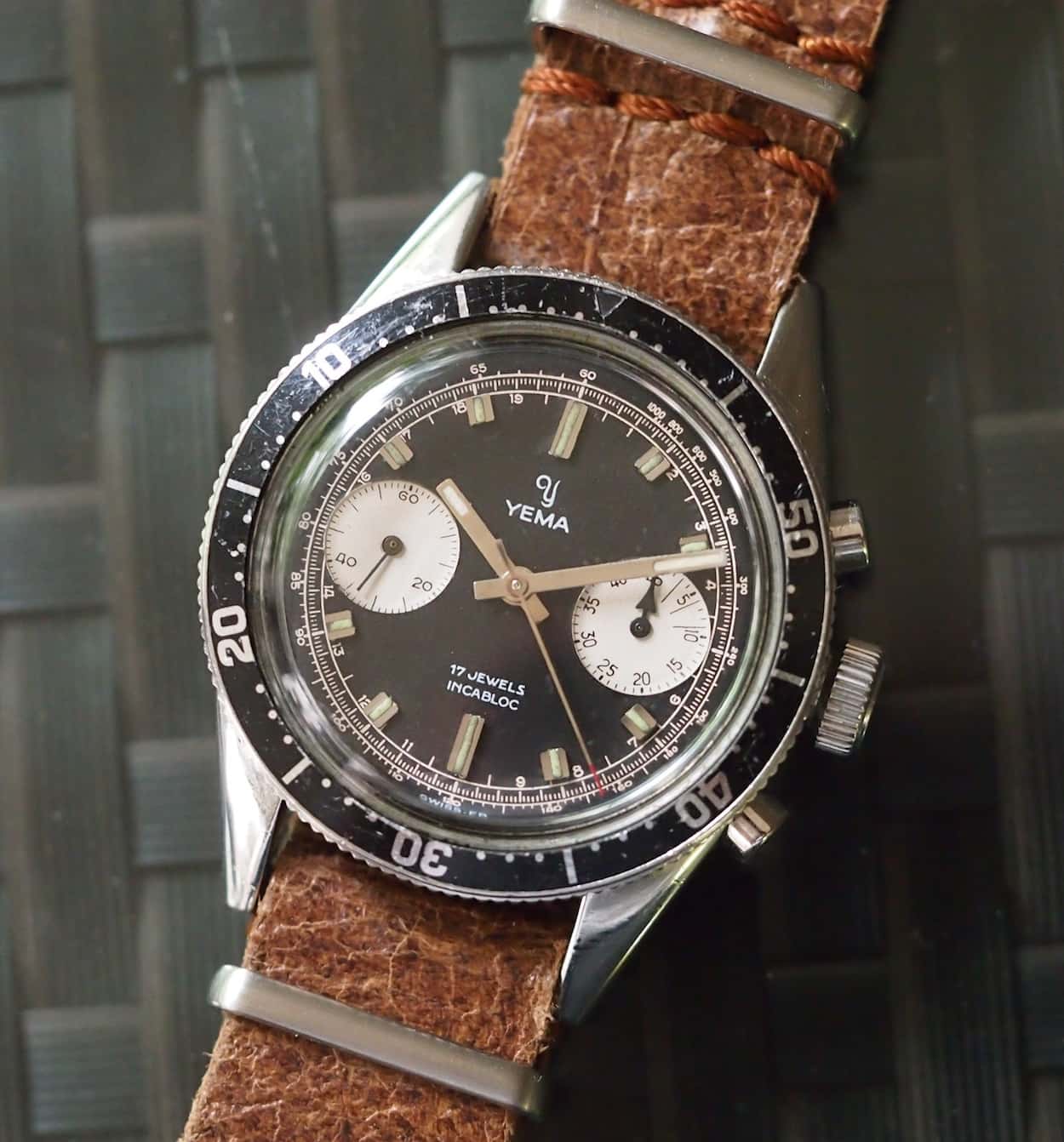 The Yema Daytona looks great on a weathered NATO

I mentioned that I had not really heard of Yema before roughly a year ago, but I kept seeing them come up on for sale boards and eBay. Some designs, especially the chronograph with a wood-grain dial looked French quirky (I’m thinking of 60’s Citroens with this reference) while others looked quite “of the times”. So, when I saw the Yema Daytona for sale with a $600 buy-it-now, I took a chance. While it is certainly no Autavia, or Daytona for that matter, I am glad I pulled the trigger. 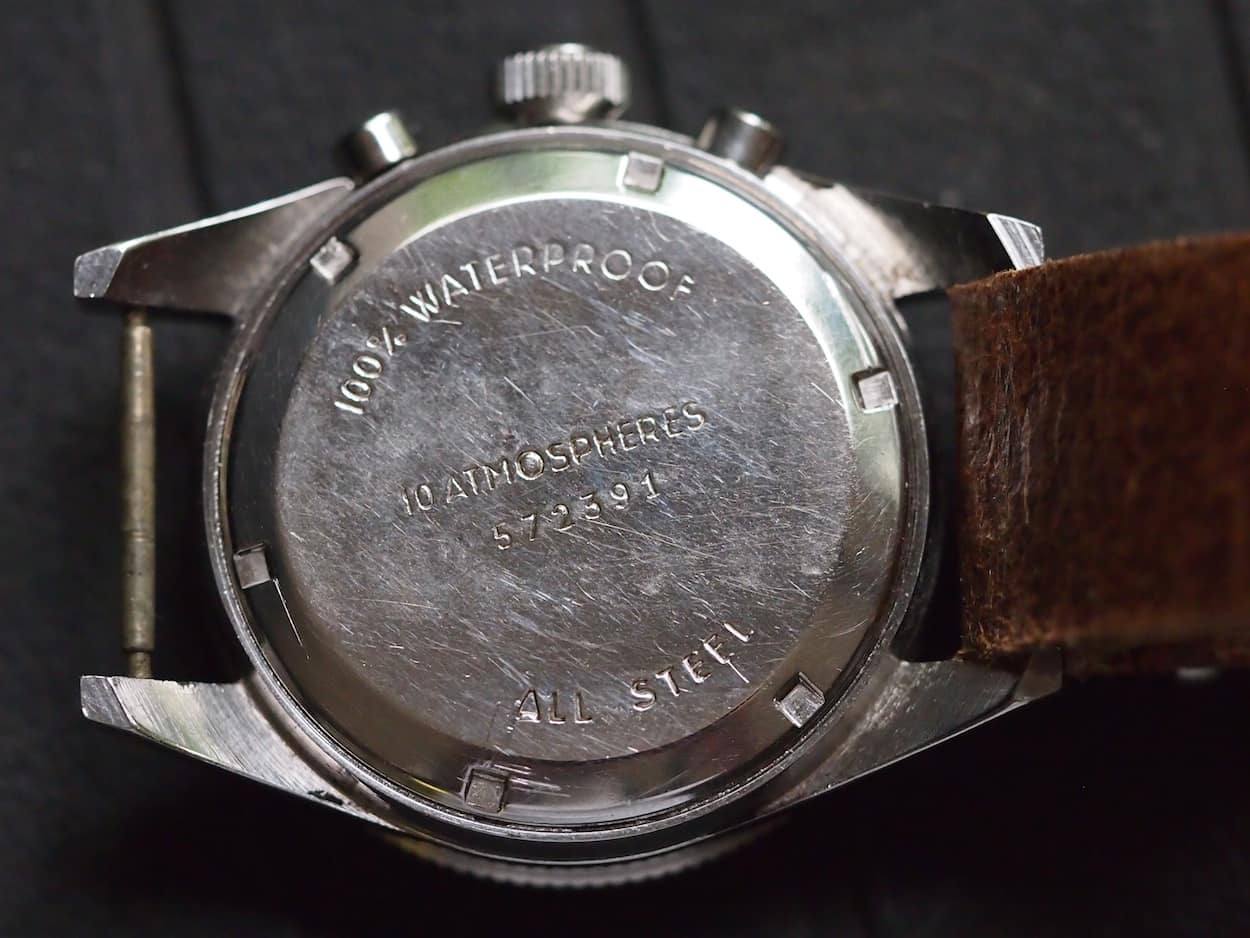 The case back of the Yema Daytona is “100%” confident!

The Yema Daytona features a stainless case, which is not always the case with Yema’s as many are plated base metal, and measures in at 39mm in diameter. It features a period typical 19mm lug width and a screw down case back that claims that it is “100% waterproof” to 10atm. The rotating 60-minute bezel is backwards counting, which is quite cool and seemed to be an option versus traditional clockwise versions. The crystal is domed acrylic. Pushers are “submerged” into the case: meaning one cannot see the posts.  The original crown is a large, finely ridged piece with a flat surface. Inside, beats the workhorse Valjoux 7730 handwinding movement that features a 45 minute recorder on the right sub-register. 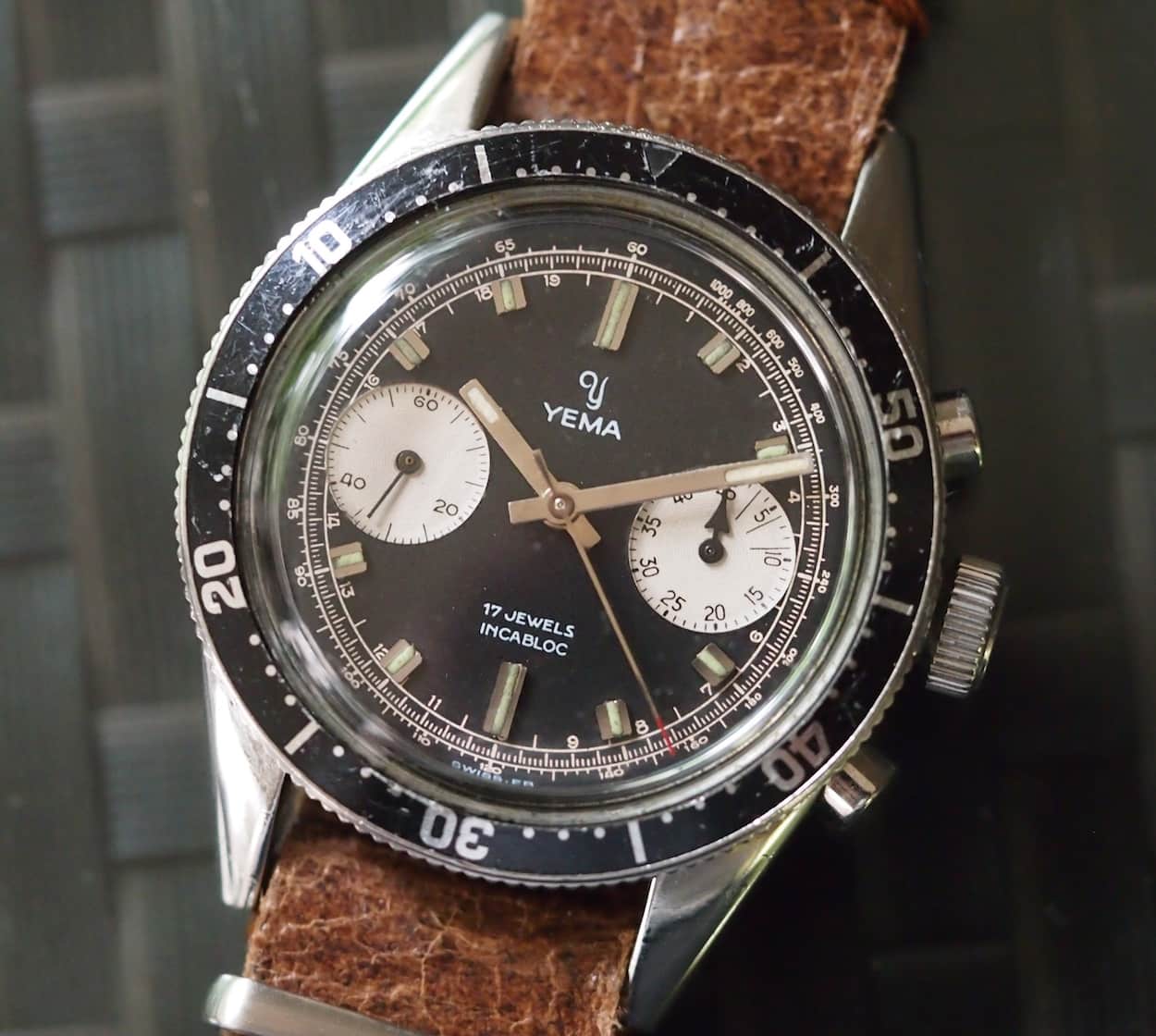 A head-on look at the Yema Daytona

The Yema Daytona gets it right on the dial…

The dial on the Yema Daytona is one of the nicer designs from a non-mainstream brand. Whereas some seem to throw everything but the kitchen sink onto the façade (Yema was guilty many times over), the Daytona exhibits some restraint, especially when it comes to a lack of writing on the dial. 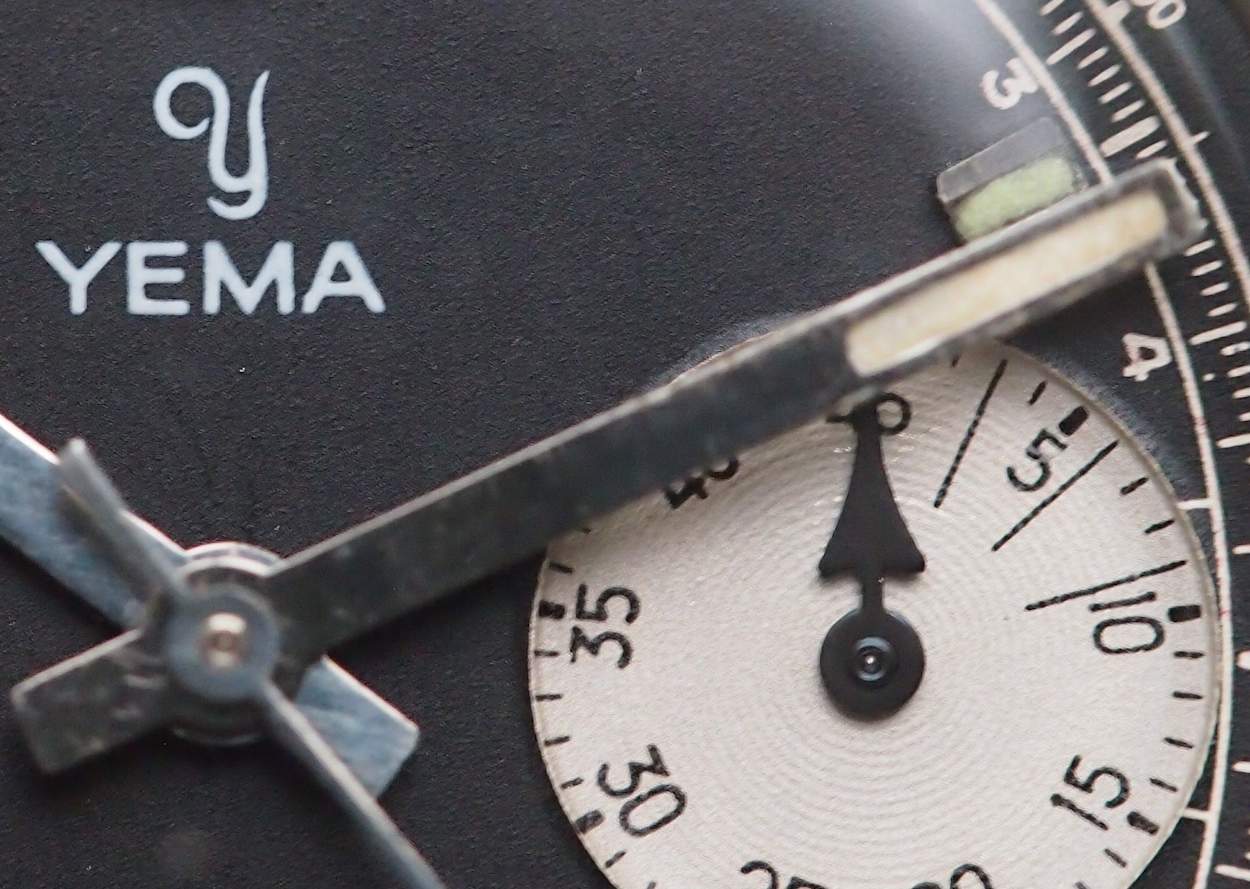 A macro of the Yema Daytona dial

You can see that Yema actually had a cool logo during this time, which, by the way, puts this watch as a mid-60’s make. Nice, applied hour indices contain a stripe down the center and are framed by a rather detailed chapter ring and tachymeter scale. The white sub-registers actually step sharply down from the dial and are fitted with hands of differing shape. Actually, if you look at a lot of Yema’s Yachtgraf’s, you’ll see some fairly creative hand designs, so it’s not surprising that the rightmost register contains something other than a needle. Speaking of needles, the central chrono hand contains a barely visible red tip. Perhaps time hasn’t been so kind to the pigment as it unfortunately doesn’t give the contrast that one would desire. Finally, if we take a look at the hands, they’re simple rectangles with lume that fit the watch very well. Yes, overall, a very well executed dial. 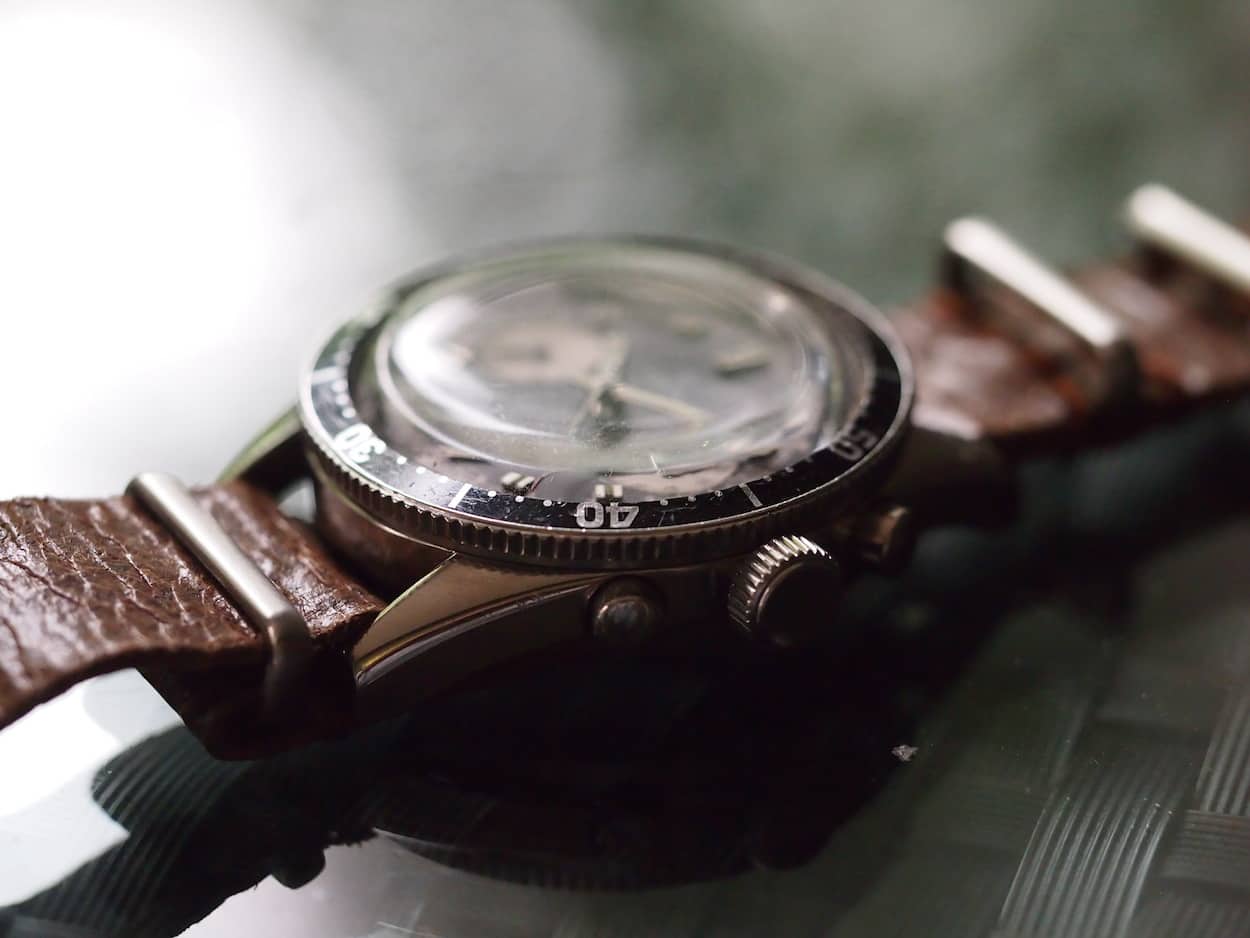 Note the chunky lugs on the Yema Daytona

…but the Yema Daytona falls slightly short on details

So far, the Yema Daytona sounds like a winner and even more so at such affordable prices. Well, the watch does represent great value, but it does have a few shortcomings. First off, the stainless case looks a lot like an Autavia’s from head-on and even from the side, but upon closer inspection you’ll note that the lugs are a bit thick. An even closer glance at the lugs will reveal the lack of delicate chamfering found on models such as said Heuer. They’re not bad, but if you’ll allow me to get geeky on you, the Yema’s case looks more like a blank off the first station of a stamping press versus the finished product.

The side shot of the Yema Daytona: note the ample winding crown

My second issue relates to the crown and pushers. I love a big, fat crown on a manual winding sports watch and the Yema Daytona certainly does not disappoint. It does, however, look a tad cartoonish, though, when compared to the stubby little pushers. So, yes, my issue is with the pushers and the fact that they’re so small. I know we are all about originality with vintage watches, but I would not begrudge someone for swapping longer pushers on this case; it would look much better. 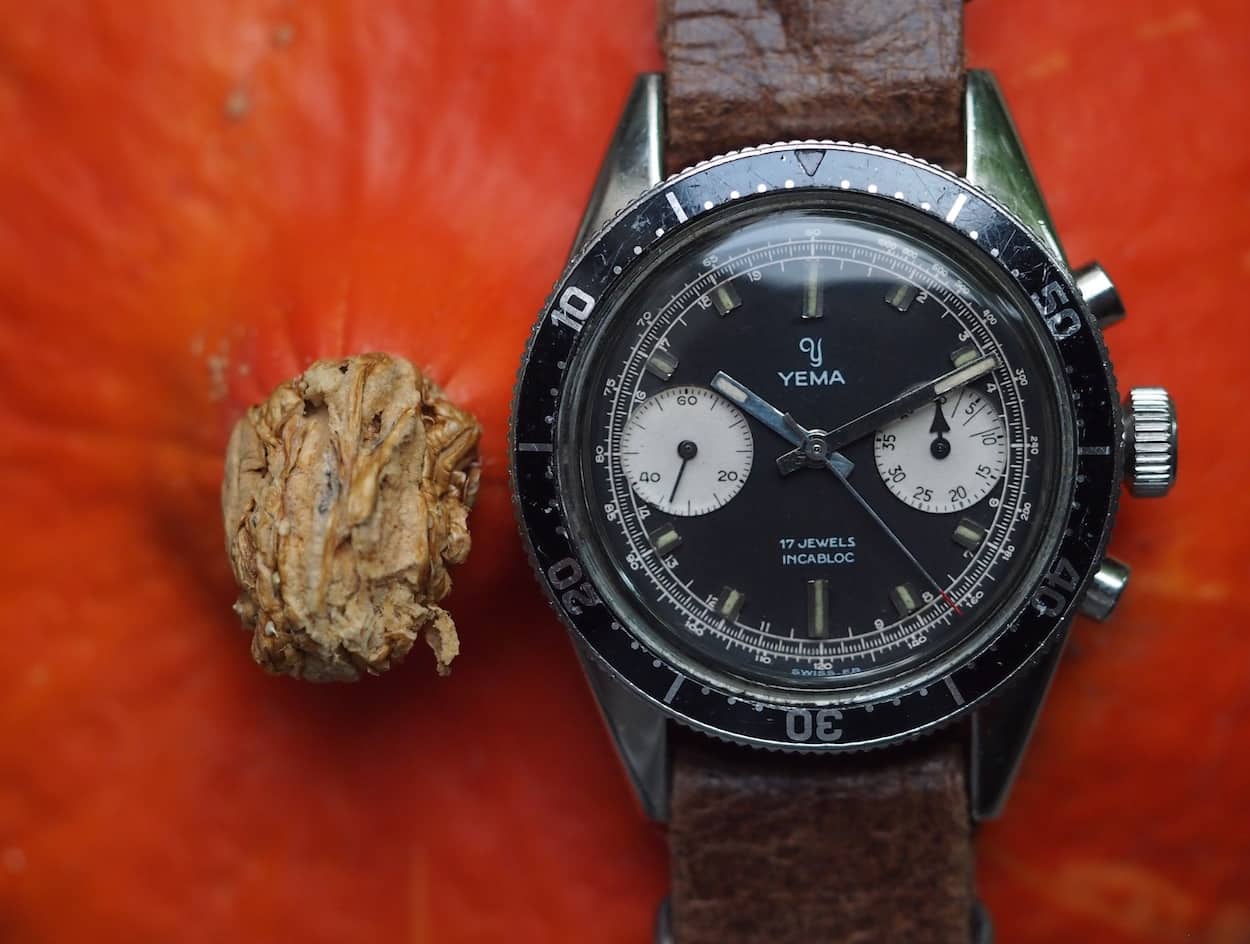 A little color next to the stark Yema Daytona

#TBT goes on the soapbox with the Yema Daytona

These aesthetic concerns about the Yema Daytona are really only noticeable if one really studies their watches and, believe me, I probably look too deeply. Furthermore, the issues are not overly evident when the watch is worn, but it does bring up an interesting point; not everything that’s old is good. Yes, my Dad always tells me this when I’m fascinated by some old piece of junk. Ok, that sounded harsh, but what I really mean to say is that there were differently priced options for watches back in the 60’s (like today) and Yema likely wasn’t anywhere near the top. Therefore, don’t expect it to have the same finishing as a period Rolex or Heuer. That doesn’t mean that this Yema isn’t good; it’s just not ever going to be as well finished as a brand that likely cost 2-3x when originally sold. 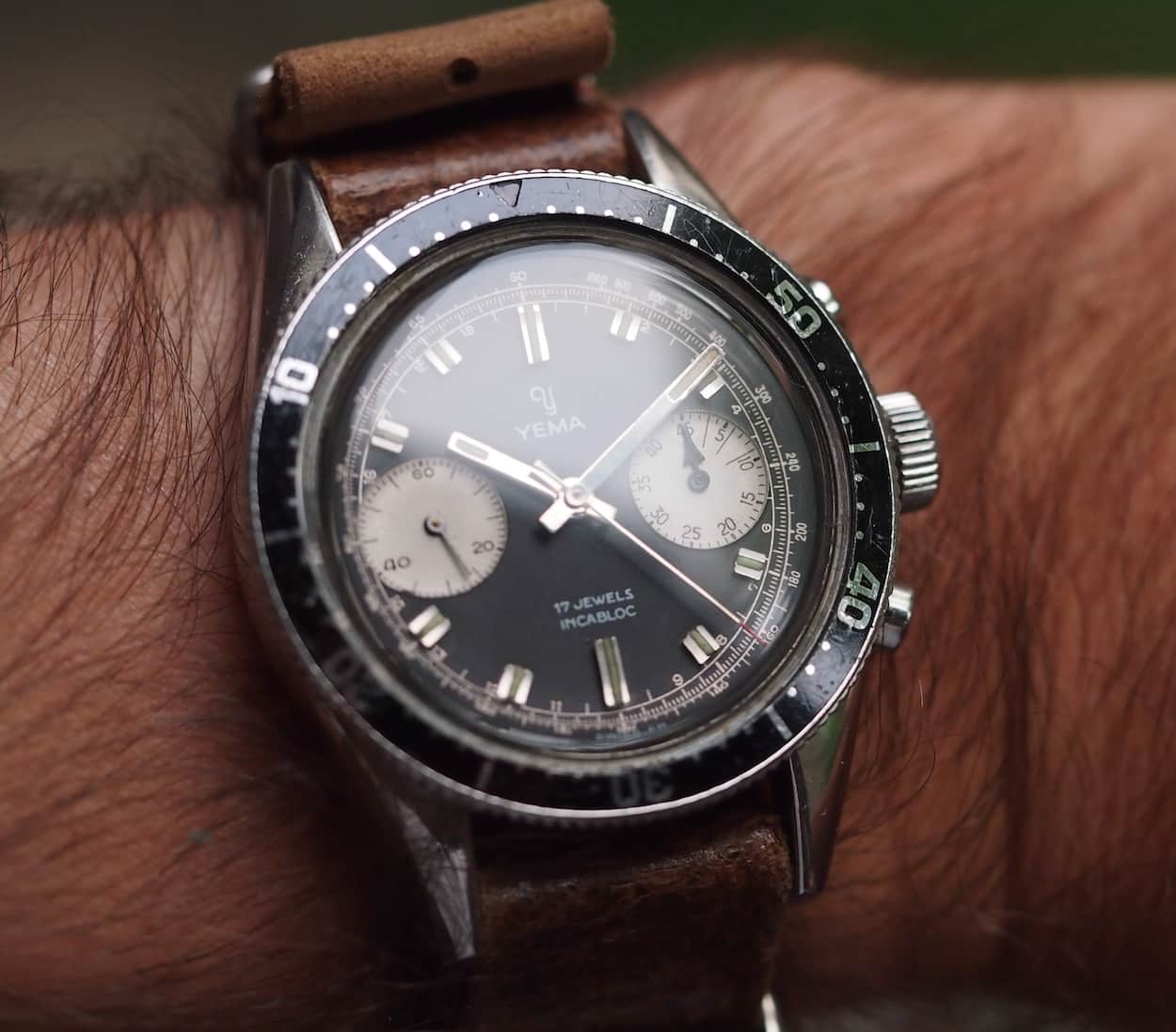 The Yema Daytona, at 39mm, looks nice on the wrist

Sourcing a Yema Daytona is likely a French experience

So, honestly, I did not mean to sound negative about the Yema Daytona; it’s a nice watch and it wears very well due to its size.  It also looks great on the rugged, Crown & Buckle NATO. Did I mention the pricing? Prices for these seem to hover around the $500-750 range and have started to sell quickly. You can find them on eBay, but you’re better off heading to eBay France. France is the home of Yema and many show up for sale there or on French watch forums. Things to watch out for on this piece, and any Yema, are the typical concerns such as correct hands, dial, bezel, etc. Finding spares is darn near a fool’s quest. If you think those are tough, though, try finding crystals…nearly impossible. If someone knows something I don’t, PLEASE let us know a good source below. As mentioned, the crown on this one is original, but I often see generic pieces fitted. Also, I have seen versions with nicely inscribed Yema logo case backs. Finally, you’ll see this case used in a number of versions such as one with a date at 6:00, a 3-register, and various Yachting variations. All look great, use easily serviceable and robust Valjoux movements, and are worthwhile. 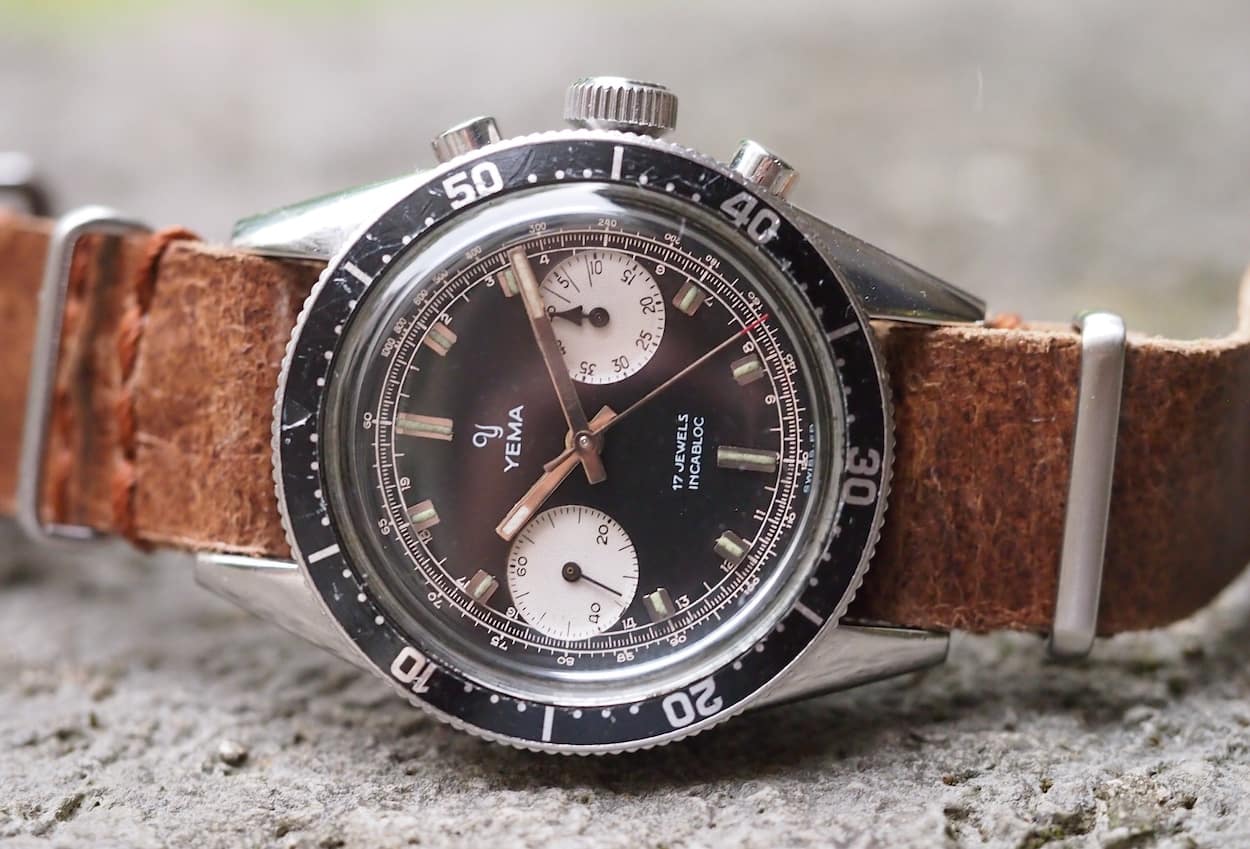 I do think there is room for appreciation with Yema chronographs as they have great classic styling, a cult-like group of fans in France, and are equipped with great mechanicals. Do I think they’re the next Heuer? No, and they don’t need to be! However, because they are often seen on social media and are affordable, that has increased their desirability.  Plus, with pricing again in focus, they make a great starter watch for the new collector. Therefore, consider looking sooner than later to capture one at these bargain prices. I hope you enjoyed this week’s #TBT, a look at the Yema Daytona: a nice watch from the French marque that had evaded me up until only recently. Until next week…au revoir

Wear and all, the Yema Daytona is still an attractive watch

The Yema Daytona, at 39mm, looks nice on the wrist

A macro of the Yema Daytona dial

The Yema Daytona posing next to another beloved French product

The case back of the Yema Daytona is “100%” confident!

The side shot of the Yema Daytona: note the ample winding crown

A head-on look at the Yema Daytona

The Yema Daytona looks great on a weathered NATO

Note the chunky lugs on the Yema Daytona