#TBT The Mighty Ernest Borel Flash With The Best Patina Ever

My persistent hunt for the Ernest Borel Flash was rewarded by the unexpected landing of unobtainium — an original (and pretty minty) box, a charging device, and an original manual. Oh, and another crazily patinated Flash that nobody wanted…

Someone from the UK listed an Ernest Borel Flash with a cardboard-like brown dial on eBay maybe a year ago. A notification instantly popped into my mailbox as I still had my crawler active. I clicked on the link excitedly, but the price tag was a downer. The seller linked my original article on Fratello in the listing and expected a fat sale, I guess. The watch needed a movement overhaul, a new Plexi, and obviously, someone to release the stuck pusher and revive the lighting system. That and the £500 asking price would explain why this Ernest Borel Flash kept sitting on eBay for weeks. 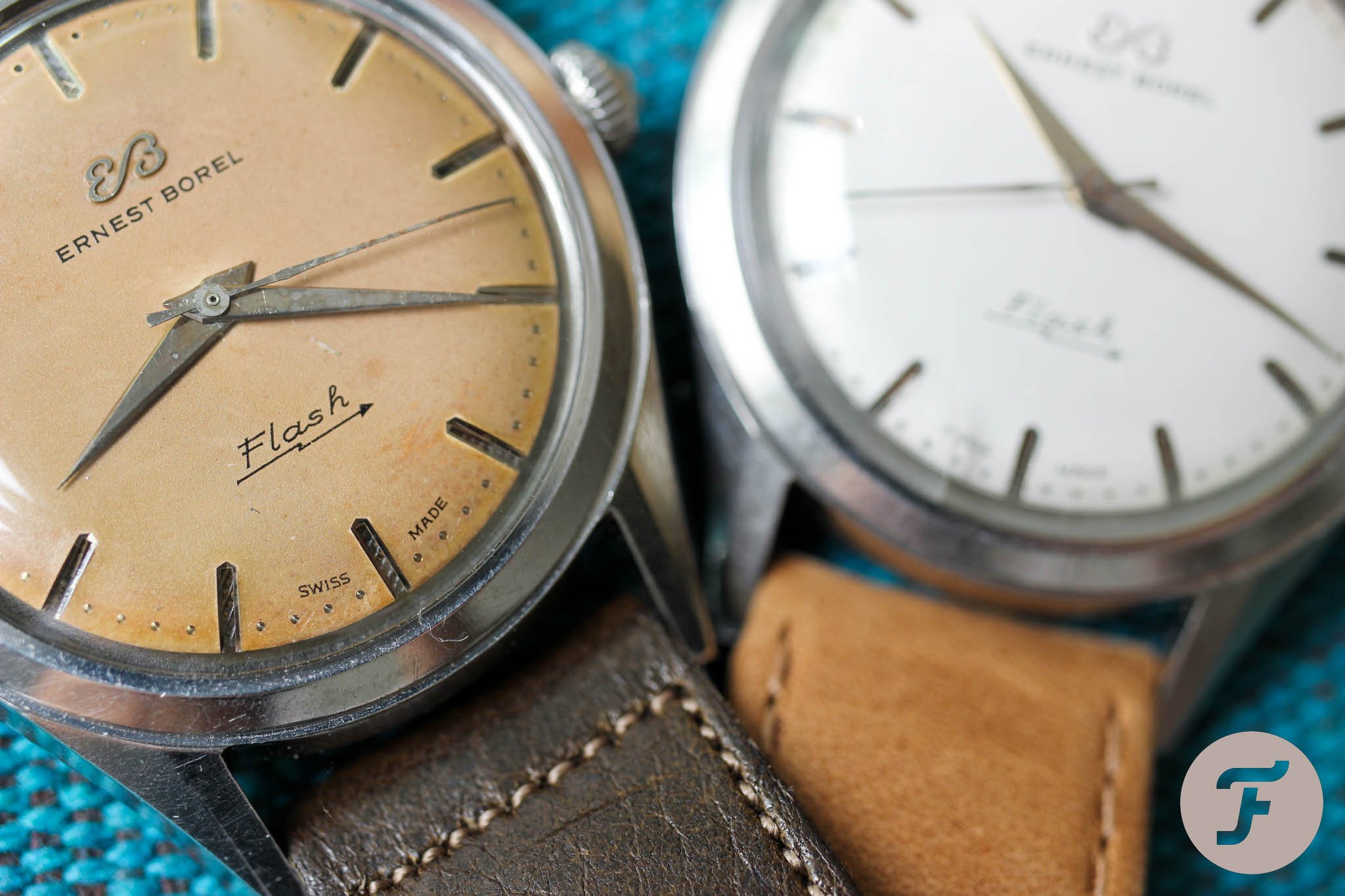 I got more and more notifications from eBay on that watch, but I started to ignore them. It was probably the seller lowering the asking price, but I didn’t care. I had a perfect example already and decided to let someone else enjoy the Flash. But the messages kept coming. After some time, I checked the listing and was pleased to see that the price had dropped by half…but there was still no interest in the watch!

I realize that if you haven’t been through a Flash restoration before, pulling the trigger on such a timepiece might be scary. I waited a few more days. When nobody was showing any interest, I pulled the trigger. I had to do it and save the watch. Besides, I knew that I had one spare replacement crystal because I always buy more of them when the opportunity comes. I also had replacement bulbs, and I knew that my watchmaker already had experience with changing the batteries. After all, he has saved about six Tourist Everlights for me so far. 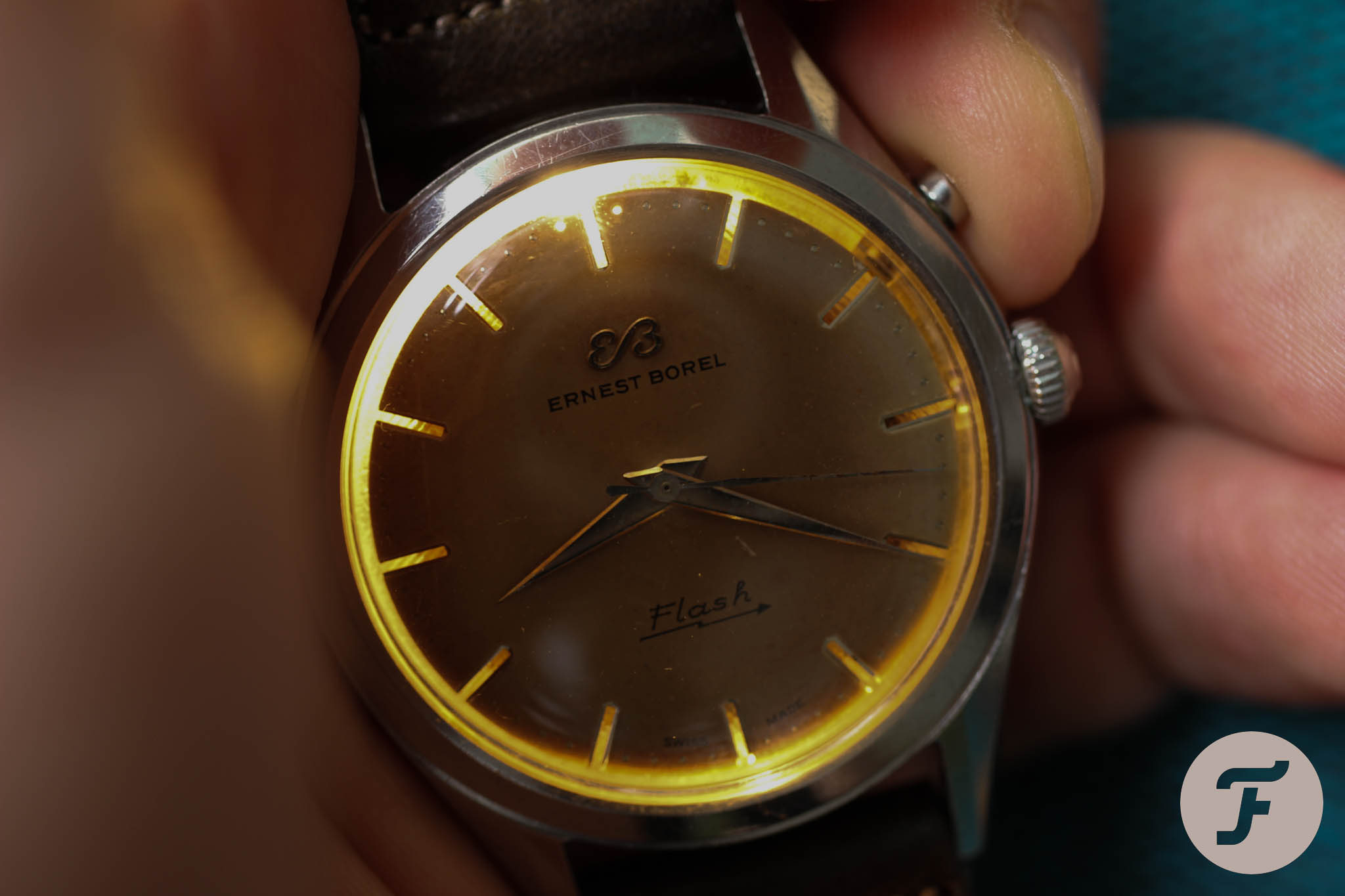 With one minty Ernest Borel Flash in a drawer, I was not impatient to see it. I didn’t even follow the tracking carefully, which I usually do. But I have to say, I was impressed when I unboxed it. I have seen many patinated dials, but I have never seen anything age in such a consistent way. Check the side-by-side photos with the minty white piece next to the newcomer and tell me you didn’t think it was a completely different dial color!

From indifference to the excitement

My I-don’t-care attitude instantly changed into an I-want-to-see-it-restored-ASAP attitude. I swiftly collected all the replacement parts, jumped in the car, and went to see my watchmaker. We examined the watch, all parts seemed original, including the unusual seconds hand and hat-style crown signed with EB “butterfly” logo. 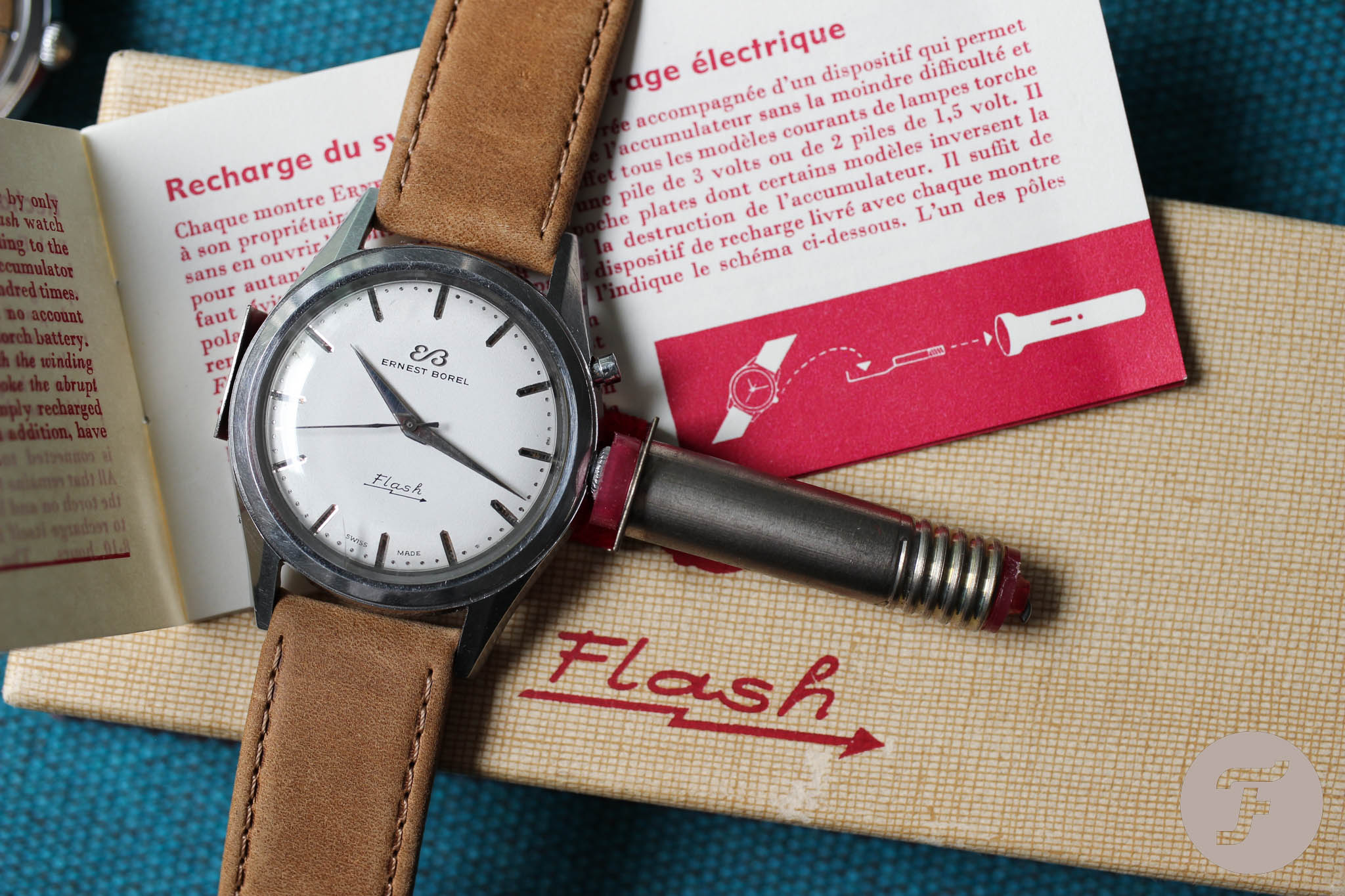 When a white dial turns “tropical”, you can usually see it. It’s often like some sort of weathering that is developing on the dial. I didn’t say “developed” because it often looks like an unfinished process. The aging is still in progress, if you like. It’s often uneven with stains and parts aging differently, or it has a gradient with rich color tones.

This Ernest Borel Flash is different. When Tomas, my watchmaker, replaced the cracked and scratched crystal, the real beauty of the dial emerged. I had to check multiple times that I was not looking at a dial in a different color. Don’t ask me how a white dial turned into such a brown cake. When you check, you see that the color is perfectly linear, maybe just a bit darker around the perimeter.

Checking and comparing my minty Flash and the “cardboard” Flash under the loupe became really fun for me. Only a magnifier can change a perfectly smooth dial surface into a sandpaper-like structure. With it, you can see that the “sand” remains a brighter white while the “paper” has turned a dirty brown. Here and there, you can spot tiny rust stains. My favorite detail is the accumulated dark brown spots trying to attack the highly polished applied EB logo. When I place both Flash watches next to each other, I can hardly decide which I like better. 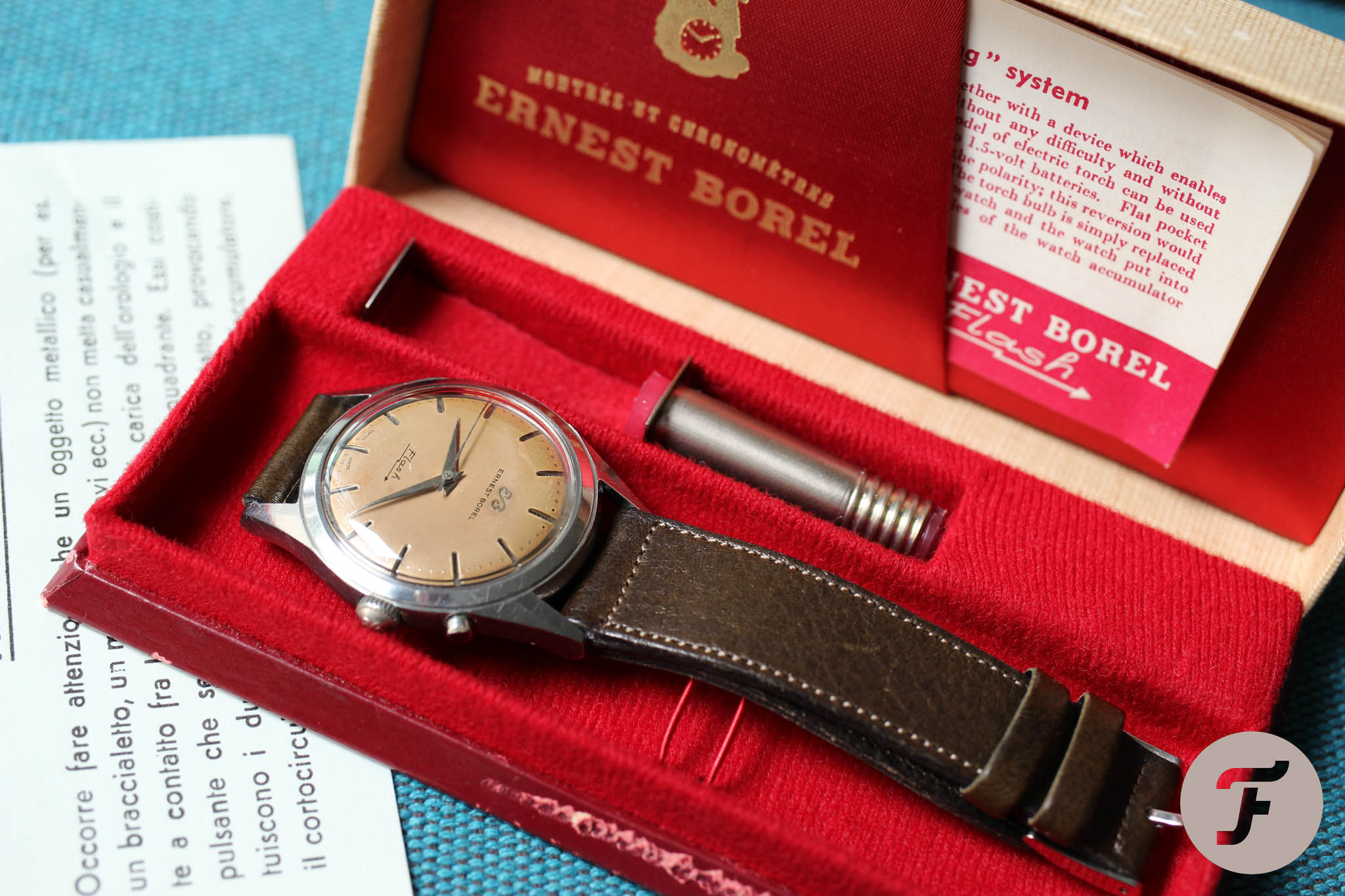 A few months later, another Flash notification from eBay came through. This time, there was no watch involved. A seller from Italy had listed a minty Ernest Borel Flash box for the criminal price of a watch. As I considered it a once-in-a-lifetime opportunity, I bought it regardless of the price.

I don’t get excited about boxes that much. After all, I can’t wear them on my wrist. I bought it only because of its scarcity and the historical significance of the watch itself, which we shall not forget. Ernest Borel was the first to file a patent for a wristwatch with an electric lighting system. That was back on September 28th, 1956. Although the Tourist Everlight beat the Flash to market, I find Ernest Borel infinitely unique. Feel free to read the full story here.

What is also very valuable to me is that it still carries its original charger holder with strikingly red comfy lining. We have seen a charger stand for the Tourist Everlight, but until this discovery, I hadn’t seen a single one for the Ernest Borel Flash. I took a few shots of the manual, so you are welcome to read more details about the charging process. I’m guessing not many of you have an old torch with 3V batteries and old bulbs that we could unscrew to install a Borel Flash charger… Still, it’s a genuinely creative solution. Sometimes I feel like a lonely fool in the vintage-watch community who gets the most excitement from the most bizarre timepieces. But electrically lit watches have held a special place in my heart since I got my first digital watch to commemorate my communion when I was maybe ten years old. I relish each opportunity to press the tiny pusher and see how it lights up the entire dial on an evening car ride. It is a moment that has such a special charm for me, one that no big-budget watch can match. Happy lighting!