If there is something that drives Breitling collectors nuts, it’s all the online listings where sellers claim that Sicura was a sub-brand of Breitling. Or, more controversial still, that Sicura watches were produced by Breitling or even that a Sicura watch is effectively a Breitling watch in disguise. Let’s make it clear once and for all. To help us, let’s focus on the witty Sicura Rally GT with an unusual bezel.

The problem mentioned above is endemic. If you go online, you will find many Sicura watches listed incorrectly. And it doesn’t only happen on eBay, but you can even see it at auction houses. Why is there so much confusion? Is it just an unfortunate misunderstanding or is it the deliberate effort of greedy dealers that would spin any kind of story in order to sell their watch? Well, the truth seems to lie somewhere in between. And flippant buyers must bear some brunt of the blame. If a buyer is too lazy to check the facts, the myth cannot help but grow. Fly-by-night sellers don’t need much encouragement to deceive. The fact that this verbal trickery works so often is all the incentive they desire… 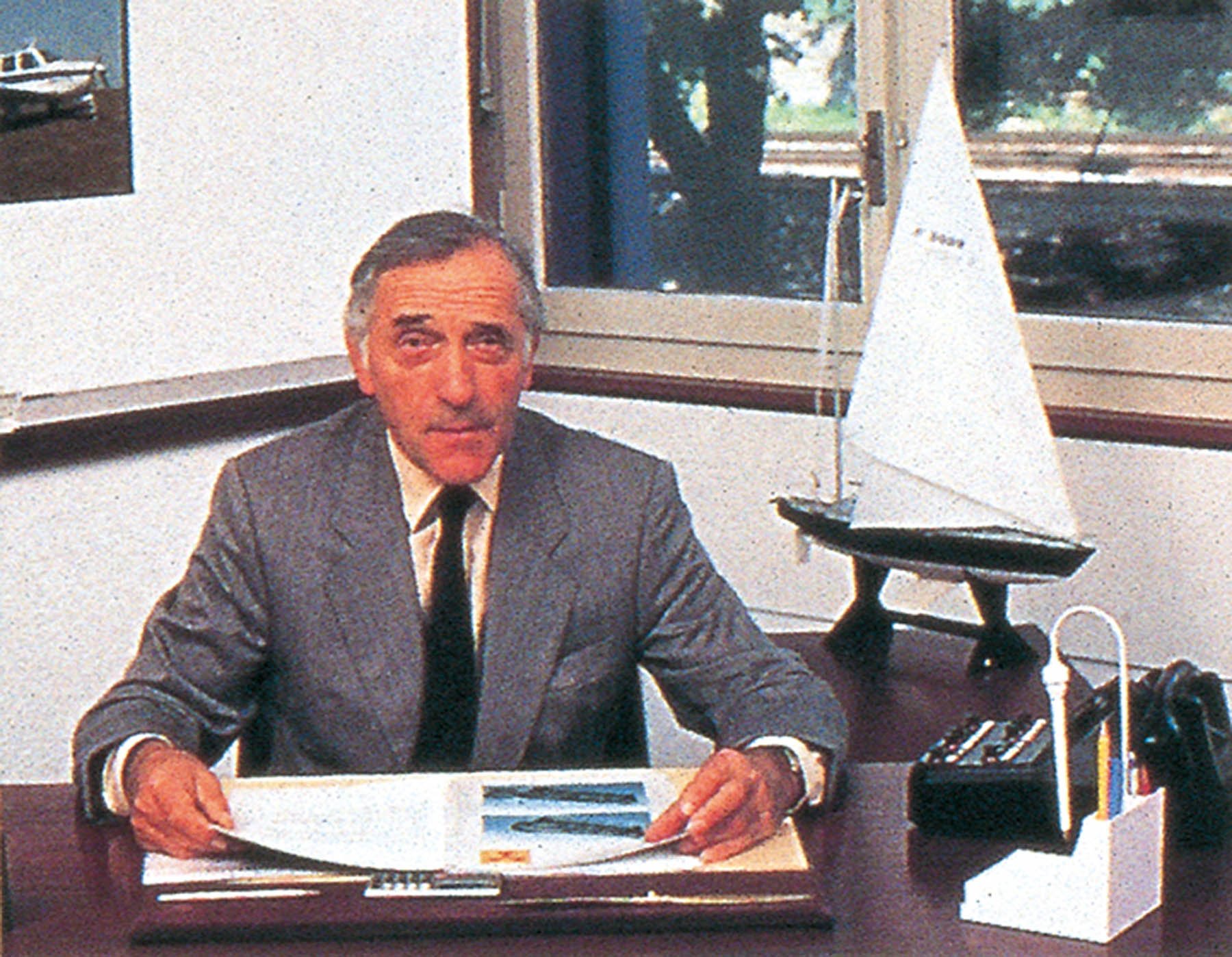 Ernest Schneider is the guy to blame

Ernest Schneider was born in 1921 and joined the army in the early 1940s. He interrupted his successful military career in the early 1960s when his father-in-law, Théodore Sfaellos, died. It was then that Schneider took a leading role in the Sicura manufacture. “Thanks to his training as an engineer and his leadership qualities, he quickly breathed new life into the firm and increased its production by establishing workshops in regions where manpower was in plentiful supply,“ says his obituary by the Federation of the Swiss Watch Industry published in 2015.

According to brochure scans from the 1970s, Sicura produced around 1 million watches annually. They were assembled in four factories found in Grenchen, Bonfold, Salvan, and Melano by a total of almost 500 workers. Schneider used to commute between the factories using a private plane. It’s no secret that Schneider loved planes, just like it’s no secret that the watches leaving Sicura sites were mostly brass plated metal with standard pin-lever movements to keep production costs and prices low. Sicura watches from the 1960s and 1970s had as much in common with Breitling as Rolex had with Citizen. Nothing.

From Sicura to Breitling

In the late 1970s, Breitling suffered a lot. The brand suffered so much that it could not make it through the quartz crisis. That’s when Ernest Schneider proved his genius and bought the Breitling trademark. It didn’t take long before Schneider dropped the Sicura brand established in 1938 and decided to focus on building a new legacy with a brand with a better reputation, heritage, and positioning. 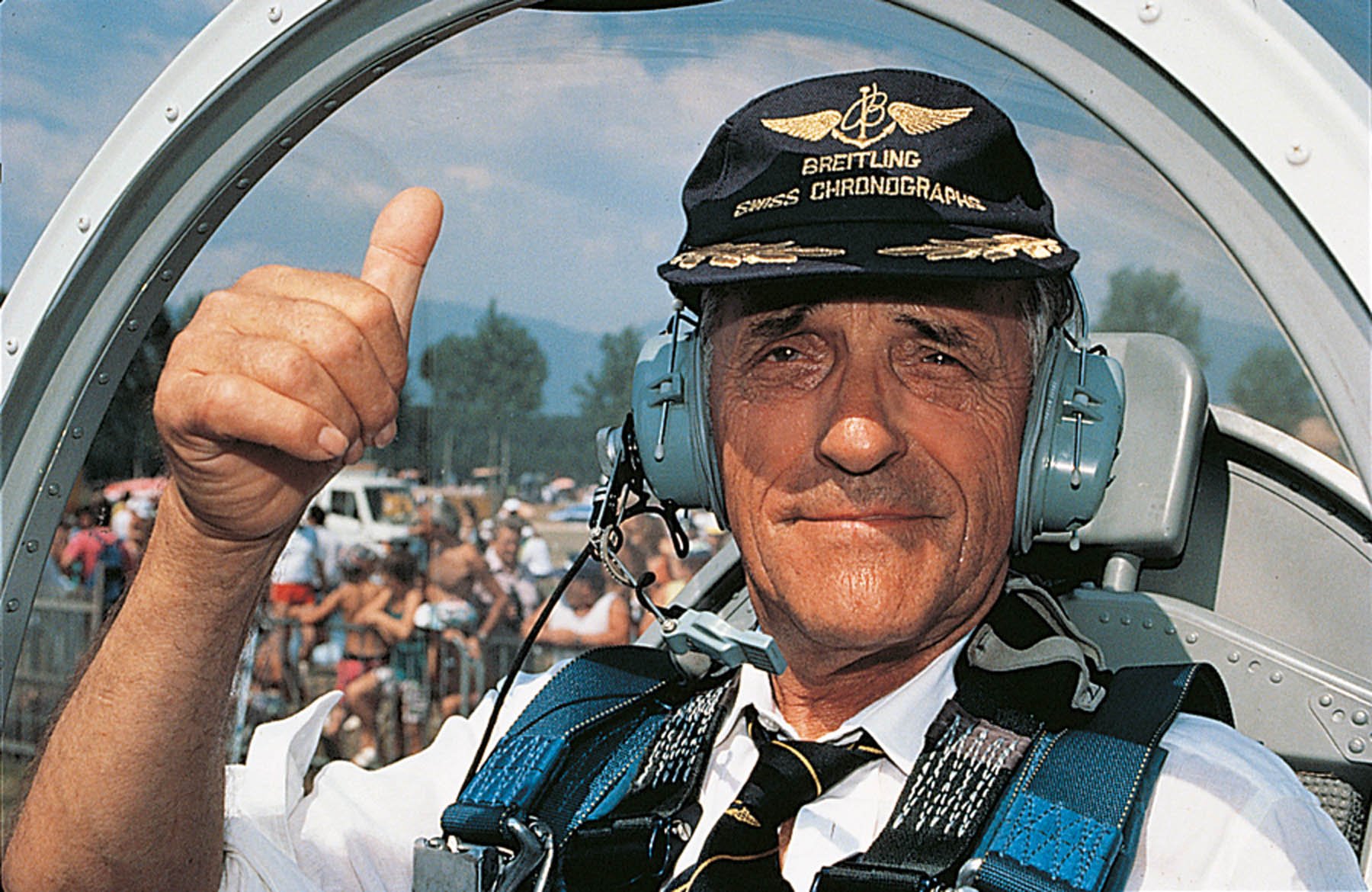 An author from Large Vintage Watches concludes that Schneider “was a master in adapting and delivering what the consumers wanted“. In his article, you can find a 32-page brochure that features the whole spectrum of watches from simple fashion watches, affordable three handers, and bulky digital displays watches up to a range of sports watches and chronographs. The quality of the imagery and graphics gives the consumer a pretty airy and premium experience, while still accentuating the rationality of the deal. 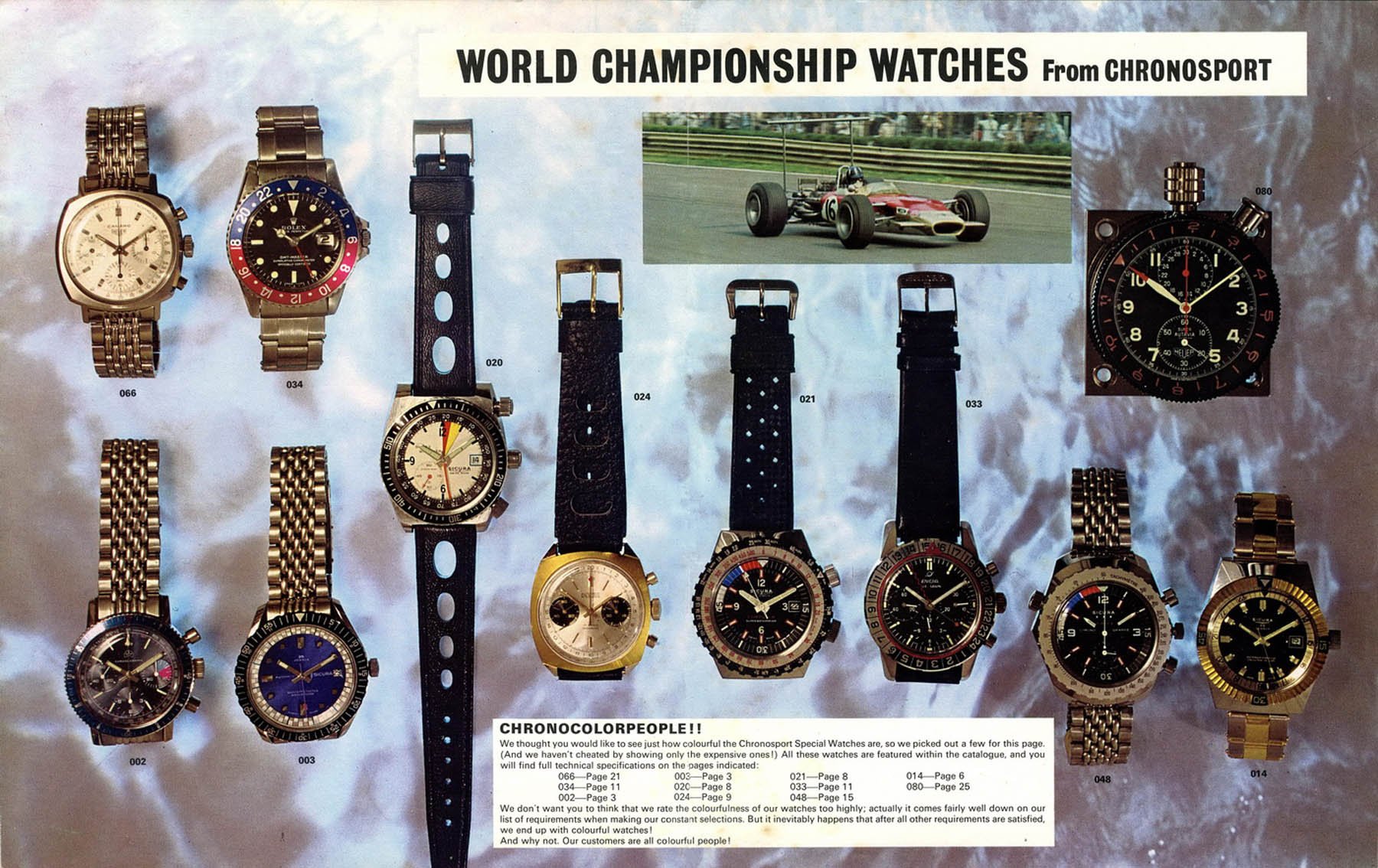 Sicura next to Rolex

Schneider was ahead of his time and definitely was not conservative or timid. He compensated for the cuts he made on casing material and movement quality with the generosity of the case diameters, bezel creativity, and dial playfulness. Schneider was quite creative and paid special attention to details that others didn‘t. Don’t be surprised if you open a Chronosport catalog from the late 1960s and you see not one, but a bunch of Sicura watches shot in between a careful selection of the best sports watches at the time. No kidding, Sicura watches proudly sit on one spreadsheet with other watch collectors’ proteges such as the Rolex GMT Master, the Heuer Camaro, or the Enicar Sherpa Graph.

I keep an eye on Sicura all the time, but I haven’t spotted a Lap Counter resurfacing in auctions yet. The Lap Counter has a special top button with an internal counting mechanism. When depressed it moves the internal rotating bezel one position with each click. The center button zeroes a flyback minute recorder. A Chronosport catalog listed it as an ideal choice for motor racing enthusiasts, golf players counting strokes or, hold your horses, smokers watching their daily consumption. You’ve gotta love the 1960s! 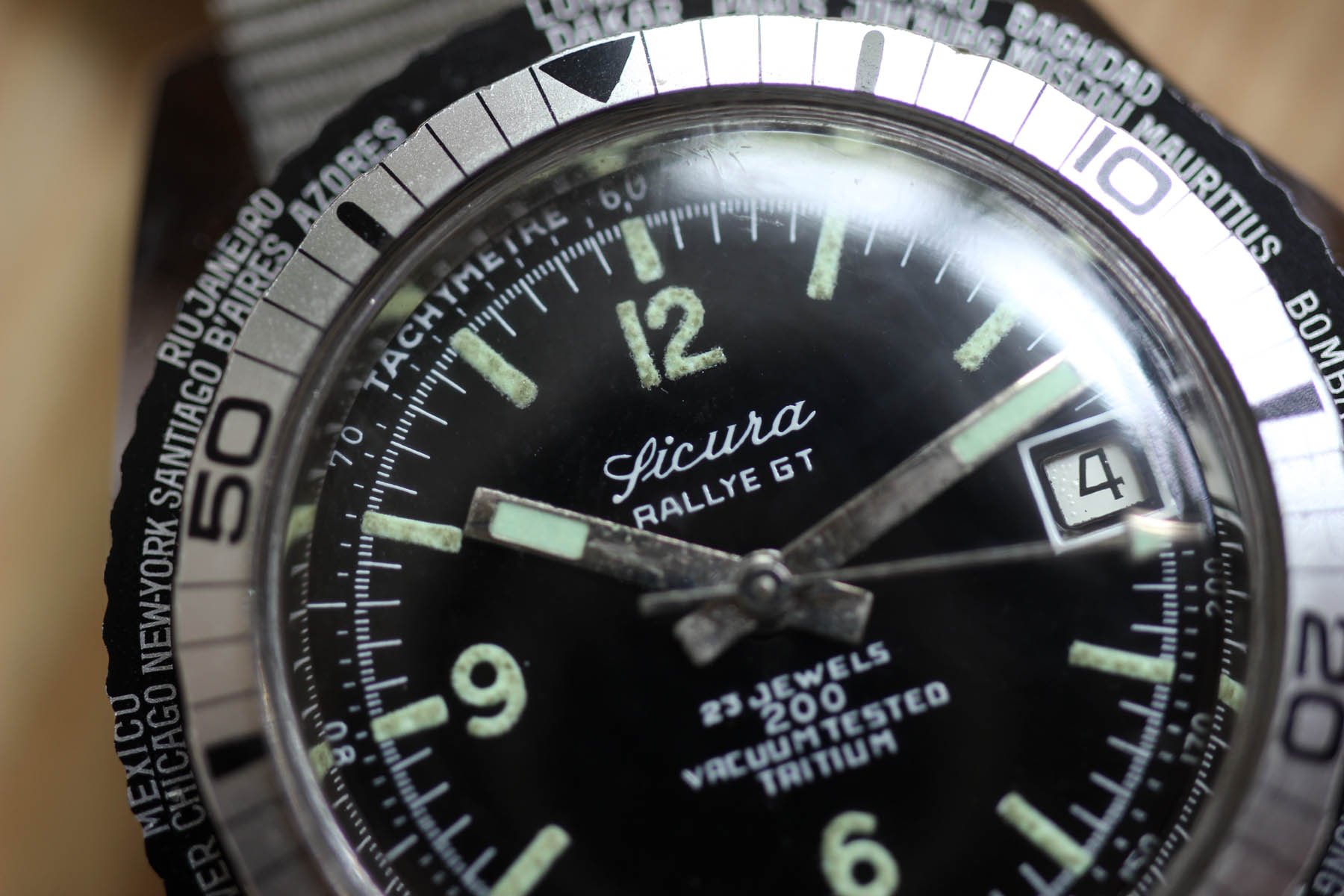 When I was not able to track down any Lap Counters, I looked around for something else from Sicura and narrowed down my focus to the brand’s divers. I like models with a rotating inner ring or models with yachting bezels. Out of nowhere, I spotted a Sicura Rally GT that comes not with one, but with two bezels. I have to tell you it instantly sparked my attention. The thicker bezel closer to the Plexi has a shiny background and a black minute track to record elapsed time. The second bezel is way thinner and it feels almost like a sheet of thin metal. It’s all black and shows different time zones. 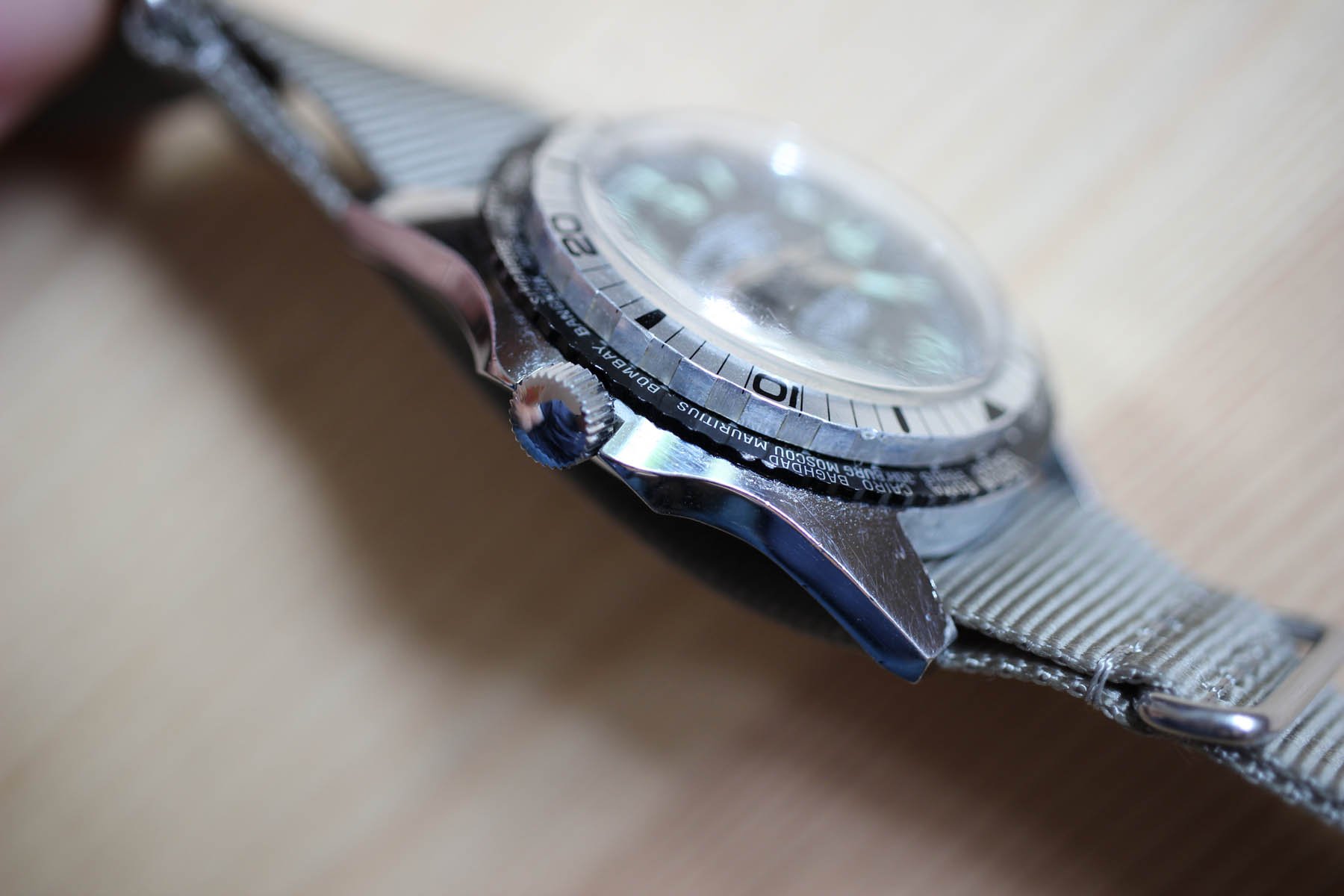 The bezels are operated independently, but you can’t move the minute bezel without moving the time zones bezel. It’s not so much that it couldn’t be done, but the problem is that the lower worldtimer bezel ring is too loose and rotates with the slightest touch. But maybe it’s just a defect of my piece, or perhaps of age.

The dial is nice and clean. It is almost hard to believe they managed to fit a tachymeter scale and date into it. The movement is nothing special, as Sicura fitted their watches with standard movements from Baumgartner or Ronda. But the movement is not the reason you buy Sicura. Just think about how many watch brands fell down to their knees during the quartz crisis, never to recover. Ernest Schneider made it through. He made it through gloriously and ultimately contributed to making Breitling what it is today.

His earlier output bears the hallmarks of a design maverick. Aesthetically, at least, Sicura is an interesting brand. And that, above all else, is why you should add one to your collection if those aesthetics strike a chord). 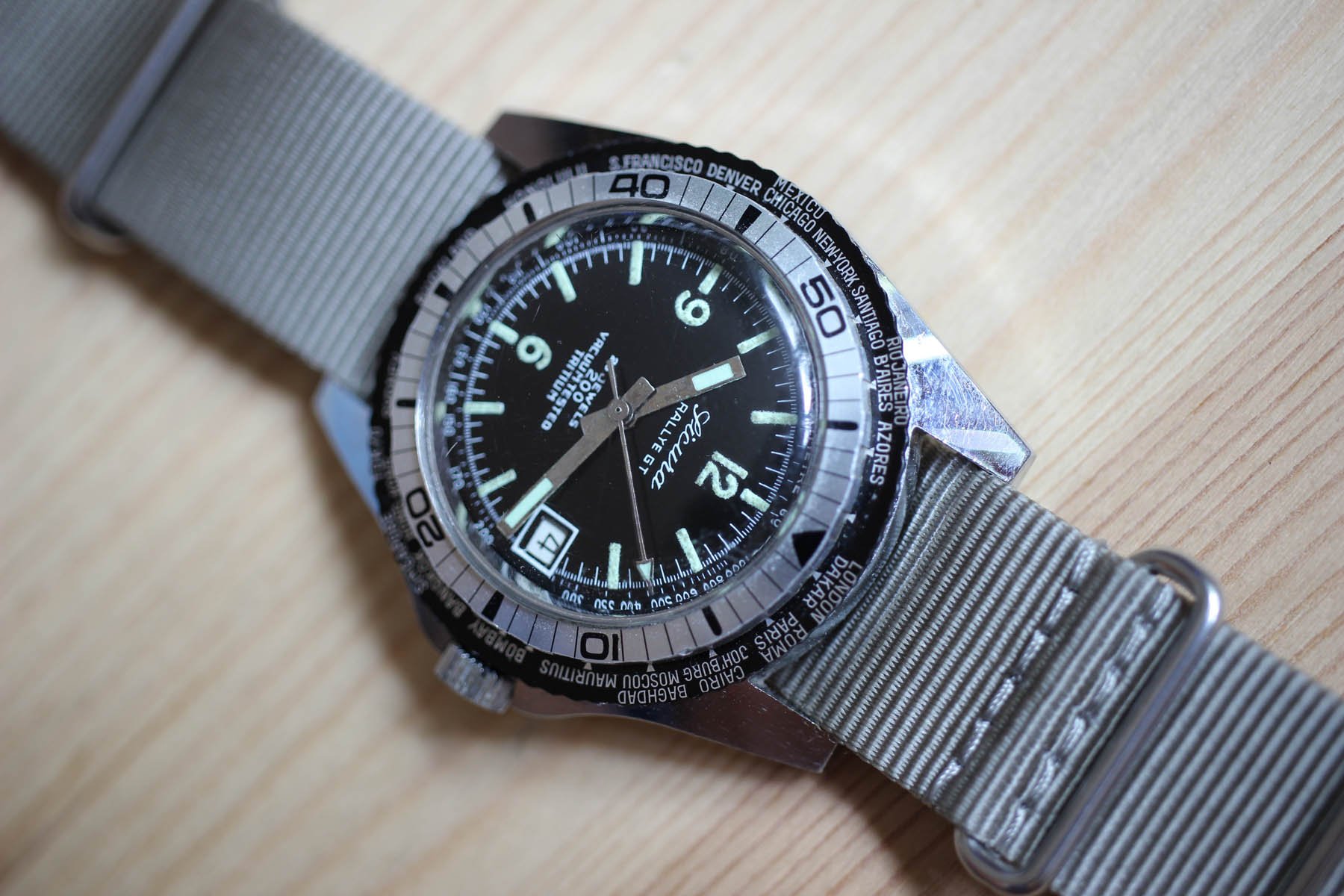 Anytime I strap the Sicura Rally GT on my wrist, I value my Breitling watches even more, as strange or silly as that sounds. The Sicura watch reminds me to never be comfortable or satisfied with what I have achieved. As strong as Breitling was, it was not strong enough when quartz watches hit the market. Respected Breitling collector @Watchfred summed it up precisely when he pointed out in our discussion that “Schneider kept the name and some of the most relevant Breitling designs alive, otherwise we’d have Breitling as a distant memory of a great name, like Universal Geneve.“

Who knows if Breitling would be still around if it wasn’t for Schneider and his prior Sicura adventures. And that’s exactly why I wanted to have a Sicura watch. It embodies the spirit of not giving up, of seeing new opportunities even in tough times. That is quite a useful attitude to possess today if you ask me. But the intrigue of what went before does not make it tangibly connected to what came after. Remember that when you’re browsing the Sicura back-catalog, looking for your next watch. Happy hunting.